Hammerhead Karoo users may remember last spring when Shimano and Hammerhead had a falling-out over Hammerhead’s existing Shimano Di2 integration, which has been in the product for years. They demanded that Hammerhead remove the Di2 functionality that showed shifting status and battery status. This was after SRAM acquired Hammerhead a few months prior.

There’s nothing secret about this functionality, it’s simply broadcasting your current shifter position and battery status – no different than any power meter or heart rate sensor data stream. The rest of the industry uses the ANT+ Gear Shifting standard (including Campagnolo, FSA, and SRAM). And further, despite other bike computer companies like Garmin, Stages, and Wahoo all making power meters themselves, Shimano hasn’t demanded removal of Di2 from their units, nor have those companies responded by removing Di2 functionality.

In talking to various people within Shimano over the last 8 months, it’s very clear that adults were not present in the room when this occurred, largely owing to a communications snafu between the two companies. One that apparently nobody wants to just press undo on.

As such, Shimano and SRAM still haven’t come to an agreement on solving this for their end users. However, the power of internet has done so instead!

An individual has uploaded a open source project that adds Shimano shifting info to the Hammerhead Karoo 2, via an Android app. Remember, the Hammerhead Karoo is simply an Android phone under the covers. And as I’ve shown before, that means you can install all sorts of apps – from TrainerRoad to Zwift, YouTube, and yes, even a new Shimano Di2 data page.

Of course, this also means there’s a level of geekiness required to install this. There is no easy button here, but, for those that want their Di2 shifting back, it’s here. At least until Shimano gets upset about it again, and demands that get removed too. Which, it probably will. Frankly, they should spend that energy on trying to make their latest power meters accurate (still). 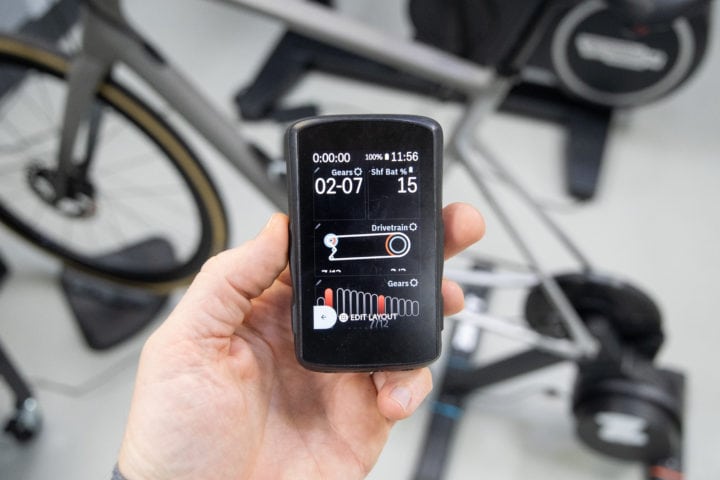 The plug-in includes all the core features you’d want. Here’s the complete list from the GitHub page:

What’s notable but not listed above is “geek-a-liciously cool animation of your actual gear shifting”, perhaps I could kindly suggest such an update.

Also, finally note that this is a Hammerhead Karoo 2 only plug-in, since the SDK architecture is different on the Karoo 1. 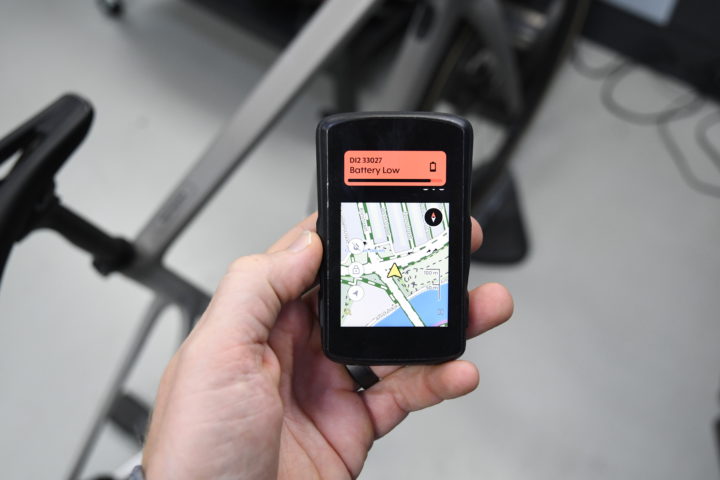 Now again, this isn’t a ‘hard’ install, but it does require a level of geek that you’re comfortable with a command line. There’s very low risk of dorking up your Karoo (far less than going mountain biking with it), but as always, you’re on your own here. Note, there’s no warranty-voiding here. Hammerhead themselves has pointed at my past app side-loading guide, and actively encourages companies to develop apps for their platform. In this case, someone did just that.

– The GitHub page with the download/instructions/release notes/etc…
– The Hammerhead Karoo Users Facebook Group, which has a thread on it and might help if you run into snags.
– GPLama’s video on it (also embedded above), which also covers the functionality more in-depth out on the road.

1) Pre-game Stuff: First, you’ll need to get your computer all set for adding sideloaded apps to your Karoo. You can follow my Karoo  sideloading guide here. Do the entire ‘Foundational Bits’ section. Start to finish. Then, come back here.

2) Download the Goods: Next, you’ll need to download the app from the Ki2 download page, under the Releases section. You just need to download the .APK, and of course, download whatever version is newest so you’ve got the latest bug fixes. In my case, I downloaded this to a folder I created called ‘Apps’ within my ADB tools. 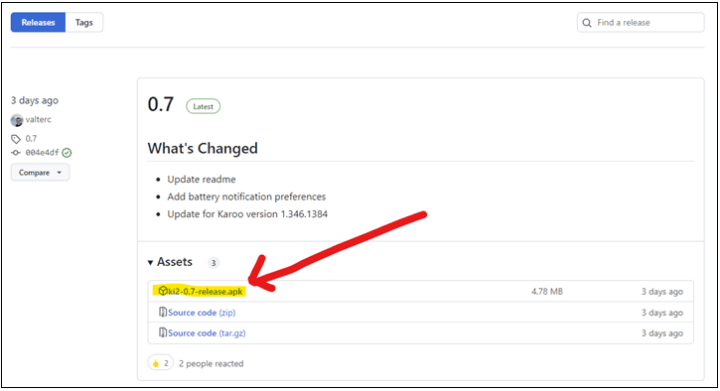 3) Install the Goods: Now, going back to the ADB command line we used in the ‘Foundational Bits’ section, we’re going to install the app. If you’re looking for a quick refresher, the second section of my Karoo 2 Sideloading guide covers an example app. It’s 100% the same here, except the name of the app is simply different. Here we’ll type, and then press enter. It should take no more than 8-10 seconds to install.

Remember: If the version above isn’t 0.7 anymore when you read this (such as 0.8 or 1.2, etc…), change that to match. And again, note that I created a folder called ‘Apps’ to put this in on my computer.

Notice it says ‘Success’ above. If you’re coming back to this guide to install an updated version of the Ki2 app, then you’ll tweak it very slightly, adding a –r to it, such as this currently fictitious 1.5 version below:

4) Open the apps list: On your device, tap the four little squares in the lower left corner of the dashboard, and you’ll see Ki2 towards the bottom of the apps list. In my case I’ve got other apps recorded, but for most people, you’ll just see it listed below ‘Sensors’, called ‘Ki2’: 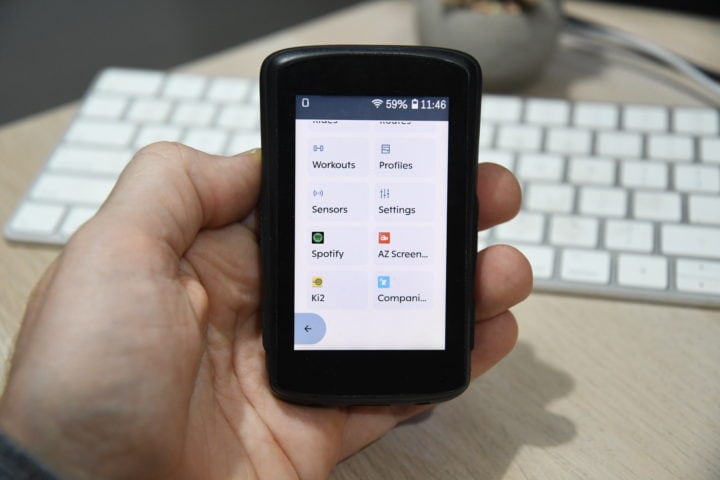 5) Next, you’ll add your Di2 sensor. Note, if you’re like me and have filled up your sensors list, you need to have…umm…less than 14 ANT devices paired. I had more. You’ll search for it and it should find it. Mine didn’t require pressing the function button for pairing/connection, but yours might (on the Di2 system itself). 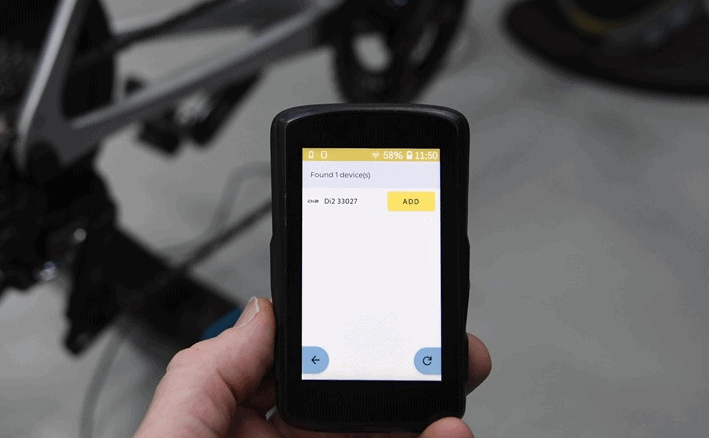 6) Things you can change: You can poke at the configuration/settings options, which are pretty self-explanatory for configuring things like the shifter buttons to do various actions such as changing data pages:

7) Add Di2 data pages: With the plug-in installed, you can now add whatever Di2 data pages you want to your ride profile. Note there are two types of data pages: Graphical ones, and non-graphical ones. So you’ll see different things in the list depending on if you’re adjusting a graphical data field versus a text one:

8) Go ride: At this point, you’re ready to ride. You’ll see your Di2 stats shown in your ride profile, just like any other data field. Arguably, I think that’s the coolest thing here – this isn’t some weird separate app or something. It’s just a standard data field at this point. 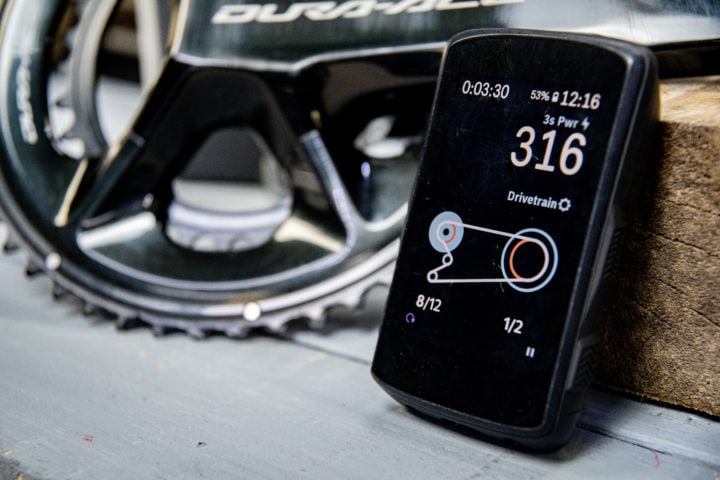 9) Bask in animation glory: Yes, there’s this animation as you shift, it’s awesome:

There ya go, done. In my case, I haven’t had a chance to test it out on the road yet, as my motivation to go out on a dark and dreary 0°C/32°F day is low right now. However, down in warmer summer-ish Australia, GPLAMA has gone out for said ride, and thus, you can see his test in the video above. He dives into more of the details as well. Note that, at present, it doesn’t yet record the shift information in the .FIT file, but it sounds like that’s on the radar.

This is one of the great things about bike computer platforms that are ‘open’, and allow development. It enables smaller developers to fill in the gaps where the company itself can’t. Of course, there are differences in the platforms between something like what Hammerhead is doing here on Android, versus what Garmin does with Connect IQ. In Garmin’s case, for an end-user, it’s silly easy to tap a button and it installs the 3rd party app. Whereas in Hammerhead’s case, unless it’s one of a couple of approved apps, the process is cumbersome at best – and downright intimidating for most. Of course inversely, there’s more or less nothing that Hammerhead can do to stop this app (if Shimano wanted them to).

Sure, they could play cat & mouse games with blocking app names, but that never really works or scales. And it’s just that – cat and mouse. Change the name, and it’s a new app. As for how long this app stays around before Shimano gets upset? Who knows. But given the code has been published alongside things, it’s unlikely to go away. That’s kinda the magical point of GitHub open source releases.

Ideally – Shimano would either adopt the existing ANT+ Gear Shifting standard, or they’d just let any company use it that wants to (just like Shimano themselves depends on the ANT+ power meter standard for their power meter to work).

Until those things happen though, this is a great little solution, and I’m glad it’s installed on my Karoo 2.