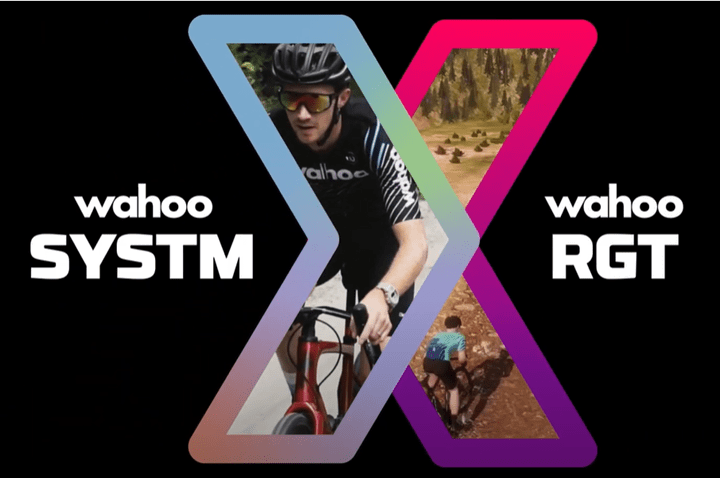 Wahoo Fitness has announced today the acquisition of the RGT Cycling app (formerly Road Grand Tours), as well as announcing their new Wahoo X Subscription Service, which combines the membership for both apps under one umbrella. In short, subscribers of either platform now get both platforms for the same monthly price (effective immediately).

In talking with Wahoo Founder Chip Hawkins, he says this will mark the start of a substantial growth period for RGT – not just in terms of fueling the company with much-needed cash, but also with new features that compete with Zwift – most specifically in areas that Zwift has ignored. However, to be clear, Wahoo SYSTM (previously The Sufferfest) is not going away or being defunded. Wahoo says they have continued content expansion plans for SYSTM.

However, all is not good news in Camp Wahoo. Just prior to announcing this acquisition, Wahoo has also non-announced a round of layoffs that impacted a number of departments in the company, from devices to apps. More on that down below. 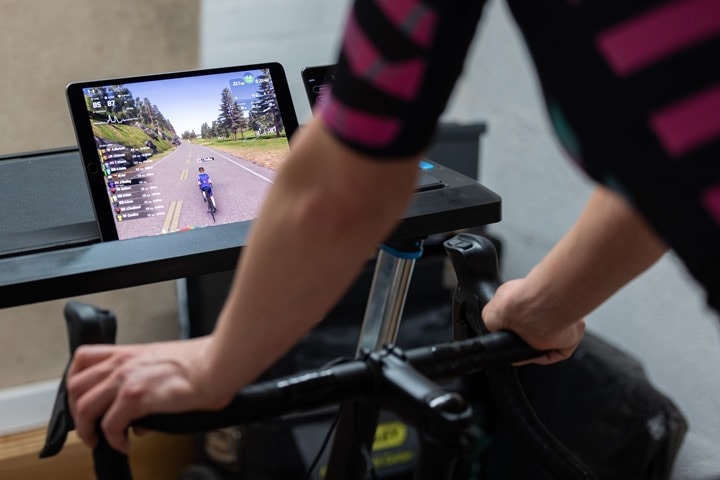 First up is the acquisition of RGT, which Wahoo says has been in the works for a long time. So long in fact, that today’s acquisition announcement is concurrent with the ability to use a single consolidated login for both apps, immediately. Something that’s pretty much unheard of in an acquisition announcement. Effective today, both Wahoo SYSTM and (Wahoo) RGT accounts fall under a new Wahoo X bundled subscription service/login account. That account covers both software apps, and even your Wahoo ELEMNT and Wahoo Fitness apps (also, WahooFitness.com accounts).

This means that subscribers of either platform now get both platforms for the same price. So in the case of RGT users, you’ll now get all the stuff from Wahoo SYSTM, and the inverse as well.

Of course, as interesting as that is, what’s more interesting here is what Wahoo plans to do with it all. In talking with Wahoo Founder Chip Hawkins, he says they plan huge investments going forward, and noted that the core of RGT from a software development perspective is designed well. Saying specifically that “it’s a well-designed system on Unity”, though acknowledging that the graphics aren’t necessarily there yet, but “that’s easy to fix” given the underlying structure that RGT has in place already atop Unity.

He went on to say that RGT’s limited scale was largely because they “never had the marketing budget” to work from, especially in comparison to platforms like Zwift which can throw tens of millions of dollars at marketing each year. In the case of RGT, he stated specifically that the company had done impressive things despite operating on a “shoestring budget”.

Going forward, Wahoo sees themselves focusing heavily on RGT’s so-called Magic Roads, which allows individuals to instantly create courses/routes based on uploading a file from a real-world place. Wahoo sees big potential in two different but similar aspects there. The first is doubling down and focusing on the race and cycling realism aspects for those that want it, but then a second piece being more gamification (e.g. for those that prefer the Zwift style). Thus, in effect, allowing a user to choose which type of experience they want when they go off to do a race or ride. Wahoo says they don’t see themselves getting into the world-building realm like Zwift does (e.g. Watopia, Makuri Islands, etc…). 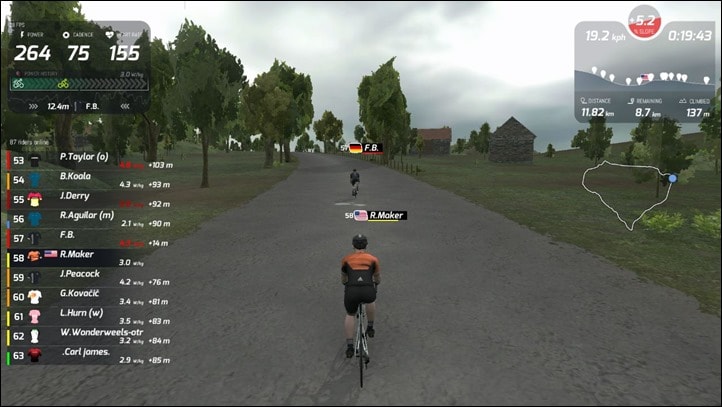 It’ll be interesting to see if that approach works, I’m somewhat skeptical of that, for the simple reason that one thing Zwift has demonstrated is that while people like choice (e.g. choosing a world or route), they also prefer to have lots of choices within that world that are well designed and detailed, with nuances specific to a given section of the course only seen in that section and not auto-repeated elsewhere. I’m not convinced Magic Roads gets to that level of realism, since it’s auto-generating everything. Still, I’m open to being convinced.

In any case, without giving specifics, Wahoo says they plan to iterate very quickly, and will be aiming to deliver key new features to RGT that go to the core of areas, not just ones that the RGT racing base have asked for, but also specifics that the Zwift Community/Racing Core have asked for but haven’t yet been delivered on Zwift. Said differently, it sounds like Wahoo is basically trawling the Zwift forums for the features that Zwifters have been asking for, but ones that have been ignored. Expect those to be implemented first.

As for SYSTM, Wahoo says that it’ll continue to get content additions. The company seemed to imply that they see the SYSTM app as relatively mature in terms of delivery, but now want to keep adding more content. Whereas RGT will see both content as well as growth of the app design/features/etc.

In terms of the existing free version of RGT, Wahoo says that’ll remain, stating specifically “there will still be a freemium option across all platforms”.

Finally, note that from a pricing standpoint there is one loser here, which are RGT subscription users that were paying $9.99/month. That’ll continue till Sept 1st, 2022, then rise to $14.99/month. However, it should be noted that if someone signs up for the annual membership, then the cost is $129/year (effectively $10.75/month). 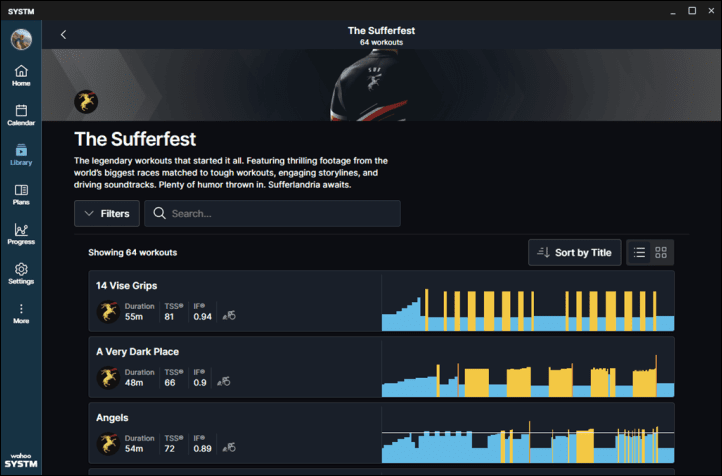 While much of today’s media attention will be on Wahoo’s acquisition of RGT, one would be remiss if the substantial round of layoffs that occurred this past weekend weren’t covered – as certainly, they form part of this picture, even if only tangentially.

Last Thursday night, Wahoo notified a number of employees that they were being let go as part of a large round of layoffs. This impacted employees across all divisions, including device/firmware, Wahoo SYSTM, and other components. Wahoo wouldn’t disclose the exact number of employees that were impacted, however, based on the numerous employees that reached out to me over the weekend, the most consistent range puts it roughly in the ballpark of 50 people.

Wahoo would confirm that the layoffs did occur, and noted that for the last several years the company had doubled its employee count each year to keep up with demand. While that worked during times of tremendous demand (namely, the surge of COVID lockdowns and massive demand for indoor training products), that was no longer viable for the company, as the market is now substantially down for the company. This massive drop in product demand mirrors what I hear from most other companies in the space, though, some have put in more in line with pre-COVID 2019.

Albeit, the mix of demand has shifted, with some indoor training companies noting a shift in the blend of more premium heavy products back in 2019, to more entry-level products. Said differently: Any cyclist who planned to buy a nice trainer would have done so in the last 2 years. And anyone who didn’t, probably wasn’t all that deep into the sport.

As for Wahoo, they noted that they had to “right-size” the company going forward, while also wanting to have better time-zone coverage going forward with the RGT components being brought onboard. Similarly, it would not surprise me to see layoffs in other indoor training focused companies over the course of the year (at least, the ones solely focused on indoor training), as the realities of stagnating indoor app memberships continue throughout 2022.

One notable loss as part of this was Reid Weber, one of the original co-founders of TrainerRoad. He went on to join The Sufferfest a number of years back, and led much of the product development that transformed The Sufferfest from what was then an outdated software app into the vastly revamped Sufferfest platform that many came to know and love over the past few years. Following Wahoo’s acquisition of The Sufferfest nearly 3 years ago, Wahoo subsequently revamped it as SYSTM last September. 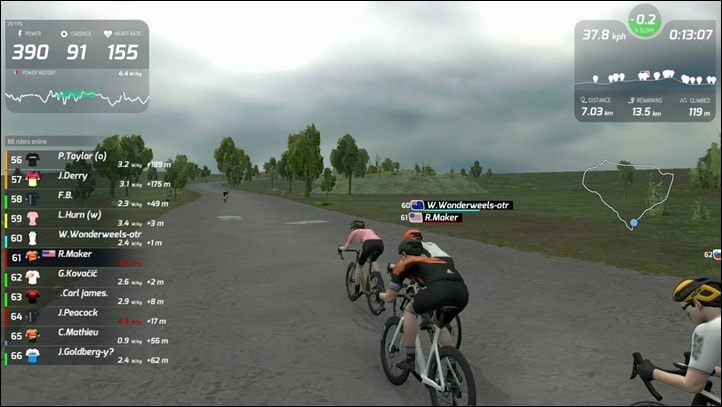 I think things are about to get spicy in the indoor training app realm.

It’s been long discussed that realistically, Wahoo was probably the only one with the brand awareness and marketing prowess to take on Zwift. But, there’s always been two core pieces to that: Financial and platform.

The first being the platform: Having something people actually want to ride – repeatedly. As a platform, RGT has made great strides over the past 12-18 months. The unification of their splintered app design into a single app is key to the start of that. But it’s still not perfect. I used RGT’s new Apple TV app a few months ago, and came away both excited and frustrated. A smattering of tiny user interface things ended up ruining my ride (namely, the start of the race). But, if there’s anything everyone agrees upon, it’s that Wahoo is really good at user interface things. However, the core reason most people tended to try RGT once and then move away was simply lack of users.

While some RGT fans love the empty worlds, the simple reality is that’s not exactly a selling point for a social riding app/platform. And to fix that, you need money. Lots of it.

And in Wahoo’s case, layoffs aside – they have lots of money from their investment fund friends. Within the industry, an oft-agreed-upon napkin figure says that it’d take roughly $20-$35 million dollars to initially launch a viable Zwift competitor. With the word ‘viable’ specifically meaning that something that’ll actually take market share away from Zwift and become something that the masses and media realistically consider as an alternative. That figure includes the software development side, but also the initial marketing/launch push (but doesn’t include trying to equal every aspect of Zwift in features or marketing spend). In Wahoo’s case, they’re buying RGT for likely far less than that. But that’s only a piece of the puzzle. After all, if the RGT platform feature-wise had been a viable major competitor to Zwift, they’d have amassed far more users by now.

Wahoo says their funding is going to drive huge software development investments into RGT, to start competing on features and functions. And at the same time, Wahoo also says they’re going to invest in marketing too. And in this world (virtual or otherwise), that’s what counts.

While the vast quantities of pro cyclists train on Zwift without being paid by Zwift, Zwift has long paid numerous high profile pro cyclists and triathletes to be featured in heavily utilized advertising campaigns, including Tour de France winners. Zwift was really the first indoor cycling platform to feature pro riders in this way. Similarly, Zwift also funds other community aspects/efforts. And the company further holds events both physically and virtually, all of which cost money to put on – all money paid by Zwift. And that quickly scales into the many tens of millions of dollars. Of course, as anyone in the industry will also readily tell you (complete with plenty of concrete examples), Zwift spends money on everything and anything like it’s going out of style. Most companies are far more restrained in their spending, either out of prudence or necessity.

Wahoo’s edge here compared to other existing attempts, is they are an existing brand that’s well known and well-liked in the cycling community. In addition, Wahoo is a brand with deep ties to pro cycling teams via their sponsorships. Thus, it won’t take as much effort or money for Wahoo to drive interest and traffic to a renewed RGT, as it might for other upstarts. The challenge however once new users arrive on Wahoo RGT will be the same as non-Wahoo RGT: Ensuring they stick the landing and stay. And that invariably gets back to more features, and more concurrent users.

Only time will tell whether it works, but if there’s one known good here, it’s that competition is a good thing for consumers. And we’re about to get a lot of high-money competition.