While much of the attention of this week’s new Dura-Ace R9200 & Ultegra R8100 Di2 product launches have been focused on the wireless and 12-speed access, far less has been written on the 2nd generation power meter. Likely because unlike the rest of the group set, the power meter isn’t available yet.

Still, it remained the part of the Shimano next-gen group set story I was most interested in, given the accuracy challenges the first generation Shimano Dura-Ace power meter had (the R9100P). Even more, if Shimano could rectify those issues while concurrently expanding it to Ultegra (as they are doing now with the R8100P), then that could make for a very compelling integrated power meter option on bikes.

Thus, I spent a chunk of the morning talking power meter tech with Shimano and their power meter team. In doing so we walked through their explanation of why the 1st generation units had the accuracy issues they did, what they’ve done to fix it in the 2nd generation, and then a slew of other technology features going forward leveraging Pioneer’s power meter technologies that they acquired nearly a year and a half ago.

Now, unfortunately Shimano did not have a rideable unit at Eurobike. In fact, if you look at all reviews of the new system, you’ll notice nobody has a power-meter equipped unit. Those will likely start making their way to reviewers in October, with widescale availability in December. Thus, while I don’t have any accuracy comparison data at this point, I am going to dive into what they did different with this unit.

What Stays The Same: 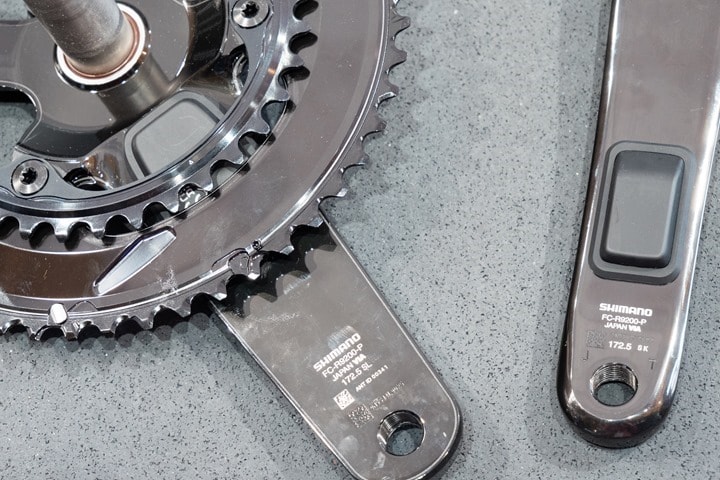 First up, some quick basics and related things about what stays the same with the R9200P from the R9100P. Oh, and a very brief primer on naming:

And then from a generational decoder standpoint:

Got all that? Probably not, it’s OK.

– 300 hour battery life same as before.
– Internal rechargeable battery is identical as before
– Weight remains of the same (though, the new crank arms are about ~60g heavier than before, depending on exact chainrings on them)
– Claimed accuracy of +/- 2% remains
– ANT+ & Bluetooth Smart power broadcasting (total power/power balance/cadence)
– Magnet still required on frame for determining cadence/position of crankarm
– Active temp compensation same as before
– The strain gauges are placed in the same spot as previous as well.
– Still a dual-sided system (both left and right crank arms have sensors on them)
– Still a fingerprint magnet and impossible to take non-shimmery photos of

In terms of claimed accuracy, while officially it’s +/- 2%, Shimano says in testing they’re seeing it closer to +/- 1% to 1.5%. Obviously, that’s something I’ll dig into in testing on the road. 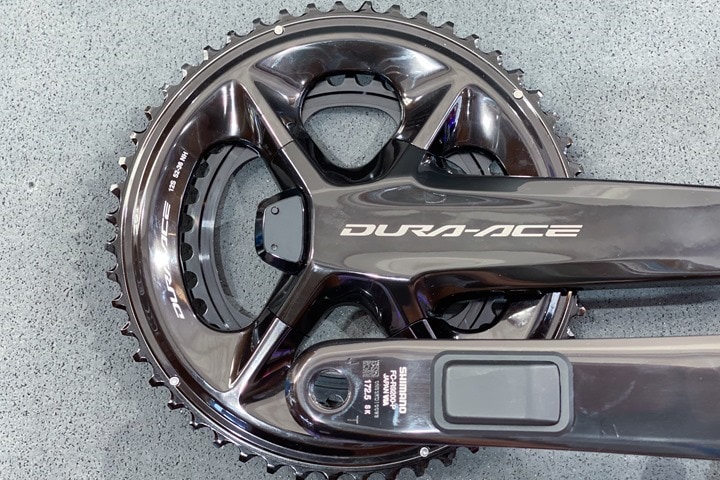 Next up are the most important things – what’s changed. This is the area where Shimano focused the most on one key thing: Materials.

In my discussions with them, Shimano noted that with the previous generation unit (Gen1 on the R9100P), the power meter had to basically be ‘retrofitted’ onto the crank arms that the crank arm team had made. As a result, the materials and manufacturing process of both the R9100 and R8000 crank arms meant that power meter strain gauges had a very hard time being consistent on that material. This wasn’t just an issue for Shimano – but really everyone else. Be it Stages, 4iiii, or all companies adding power pods to the side of those two specific Shimano units (interestingly, this wasn’t an issue in previous generation Shimano crank arm sets).

Looking at the R9200/R8100 series however, Shimano says they worked as a cohesive team such that the materials and manufacturing process were designed to support power meter inclusion/addition, rather than be just ‘best effort’ as was the case on the previous design.

At one point during the discussion, one of Shimano’s leads noted that when it came to changes, they specifically “redeveloped the material of the crank arm itself to have better predictability of the strain gauges”. That’s notable, because the core challenge of the previous gen units was that the material wasn’t predictable, and thus, you saw variations from those cranksets (be it Shimano’s power meter or others).

Thus, in summary, here’s what’ changed on this unit from a hardware standpoint:

Also, while not changed, there’s a few quick things that are notable per se about the newer units:

Of course, very few consumers will be paying those prices directly. Most will buy it via bikes that are pre-built, and thus, the actual costs are far lower.

What’ll arguably be just as interesting is whether or not 3rd party power meters (e.g. Stages/4iiii/etc…) have better luck on the newer cranksets than older ones. That’s ironically something we might know sooner than we know from Shimano’s own power meter. Merely because people can go out and buy a new R9200/R8100 equipped bike today. And thus, so too can companies like Stages. Therefore it won’t be long till they start testing their pods on those crank arms.

In any case, interesting times ahead for sure.

Oh, and for lack of anywhere else to put it, here’s a quick front and back shot of both units, starting with the Dura-Ace: 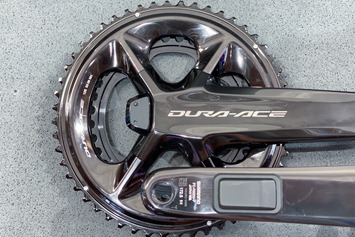 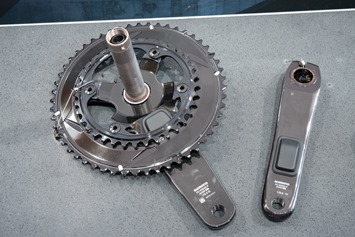 Ultimately, there’s really no visible differences here from the previous generation, aside from the connector and pod placement. And then, the Ultegra: 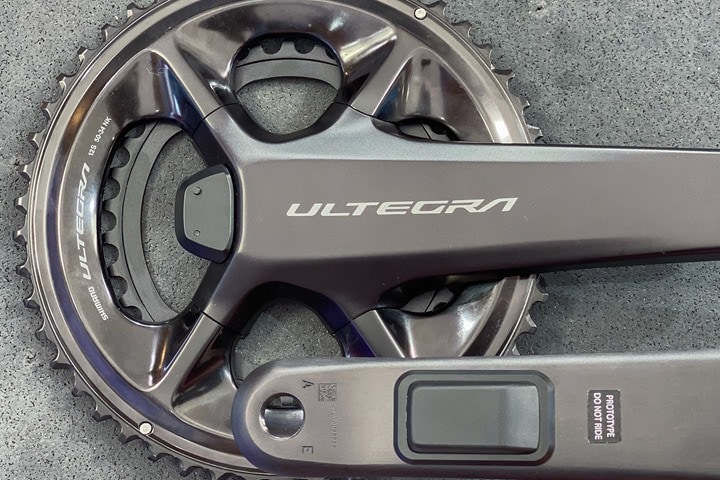 Virtually all the meaningful changes are under the hood…err..crank arm. 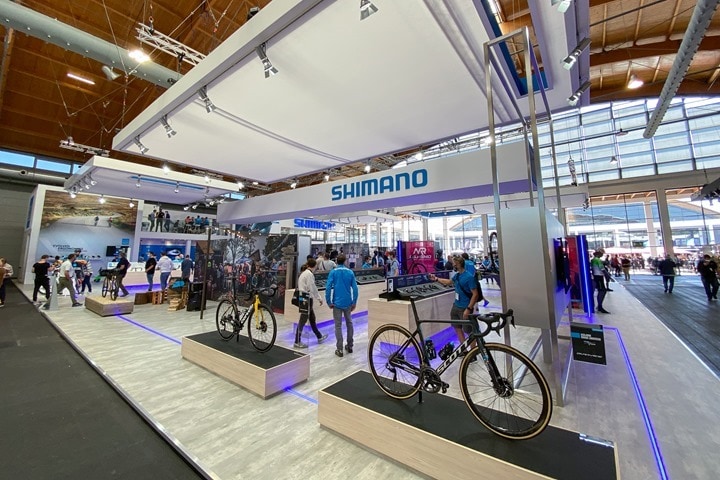 The last bit is what’s upcoming. And for that, we have to go back to the past. In this case, what’s old is new again. Shimano will be leveraging Pioneer’s pedaling efficiency metrics going forward in their power meters. However, the exact branding and precise features aren’t fully finalized yet. Still, Shimano’s goal is to have this out at the end of the year.

There’s a few notable bits within that. Right now they’re aiming to support some aspect of the ANT+ Cycling Dynamics standard (that’s part of the ANT+ power meter profile). While the standard won’t support everything that Pioneer had, Shimano said numerous times they want to support the standards here, so they don’t end up in the same situation as Pioneer with only a handful of people using the metrics since it relied on a Pioneer bike computer. 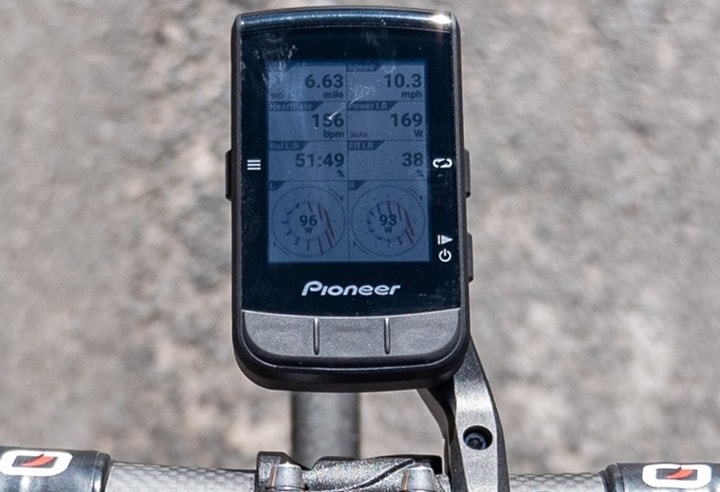 All of this will also upload to the new Shimano site. Yes, that one. Since we’re talking about that, they seemed to sorta sheepishly imply that what went down back in June was pretty much their worst nightmare. However, also a contractually obligated nightmare with Pioneer. In effect, that date was decided in a legal contract, and hell or high water, that was the end date. Both hell and high water came, and the site went down for…well…till the next month or so.

Nonetheless, it sounds like by ensuring open standards, they’ll be able to work with other players so that there’s not only no dependency on a given Shimano platform, but no lock-in with any given head unit manufacturer either. Also, that’ll probably give good reason for companies like Wahoo, Stages, and Hammerhead to fully support the cycling dynamics standard before Shimano users arrive later this year.

I’m cautiously optimistic about accuracy potential on the new 2nd gen Shimano power meter. At no point during our conversation did Shimano shy away from the challenges and limitations they had trying to make the 1st gen unit ‘work’ on a crank arm that wasn’t designed for it. While the rest of the power meter industry had long come to the realization of this conundrum, Shimano hadn’t done so publicly prior. So for them to both explain the situation as well as how it changed going forward, that seems promising.

Also promising is their repeated insistence on following an ANT+ & Bluetooth Smart specs for advanced pedaling metrics as broadly as possible (within the limitations of the specs), which is also a good step forward. Shimano has a long history of beating to their own drum in the tech field, so trying to color within the lines would be much appreciated by both consumers and industry alike.

Ultimately, the next step is simply getting the R9200P & R8100P units into the DCR Cave and out onto the roads for more detailed testing. It’s really as simple as that. Hopefully that’ll start in October, and then be ready to release whenever Shimano confirms the product is final. As always, that’ll include both indoors and outdoor testing, in what is the typical craptastically rainy fall Netherlands weather. Ain’t no warm sunny locales here.