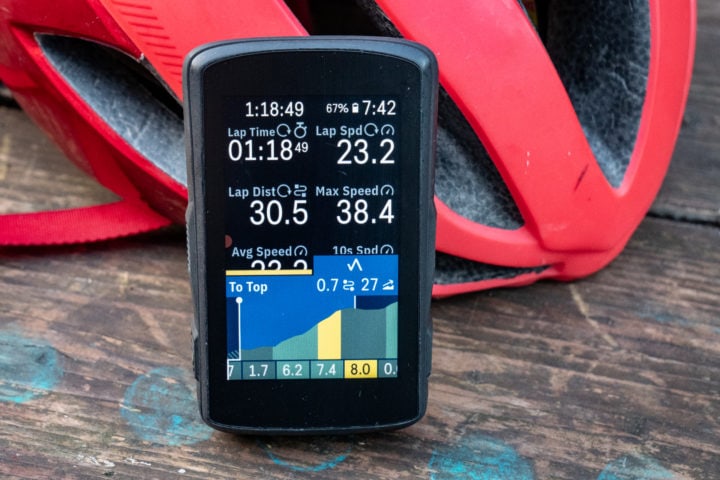 In a substantial firmware update, Hammerhead has rolled out a new CLIMBER function within their Karoo series (for both Karoo 1 & Karoo 2). This feature aims to inform you of the details of your current climb, with gradient and duration till the top, and then 100-meter breakdowns of the gradient for the entire climb. In many ways it’s modeled after Garmin’s popular ClimbPro. Yet, in some ways it does things better than ClimbPro, while in other ways falling short. Depending on what specifically you value, you’ll either find it takes the top spot from Garmin for climbers, or just needs one or two minor tweaks. Still, it’s an excellent addition – so let’s dive into how it works.

First up, you’ll need to update your Karoo. That’s pretty straightforward, and you should be offered the update from the top swipe-down bar. 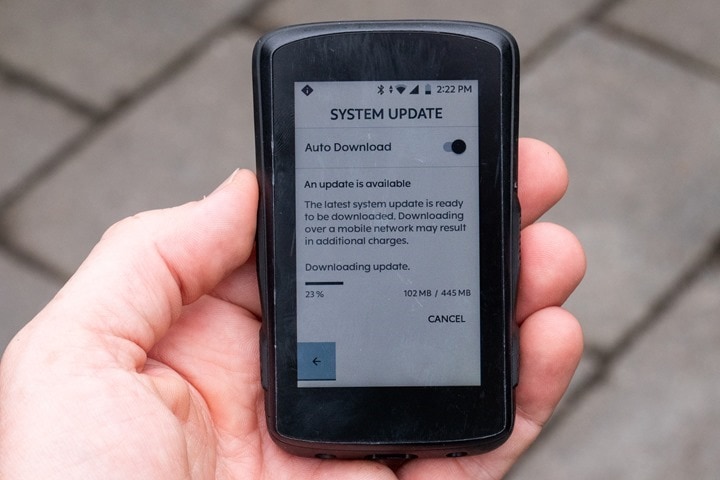 With that set, let’s get into it. 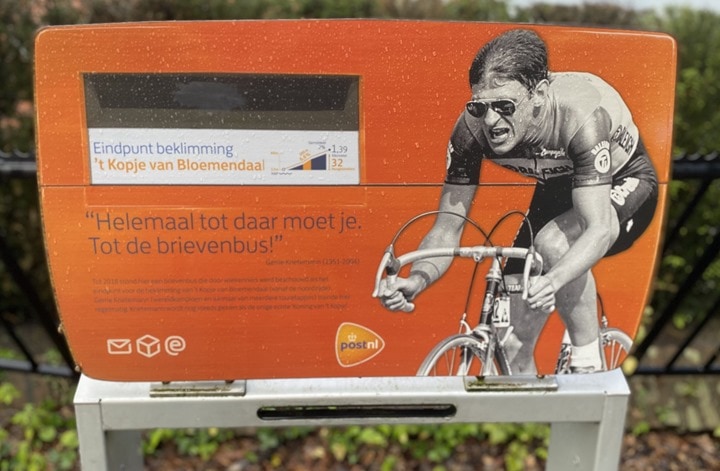 The CLIMBER feature depends on you being on a route. This can be either a predefined route, a route to a POI, or a re-route (meaning, you got off-track to get an ice cream, but the routing engine is doing stuff in the background getting you back to the planned route). Like with Garmin, the reason here is to ensure it’s giving you climb information for the actual route you’re doing, rather than just throwing climbs atop your screen you aren’t doing. For example, a road could have multiple forks up a mountain, and you wouldn’t want to be told/tracking about the wrong one. Obviously, long term I’d love to see both players solve this in a similar manner to how Strava Live Segments are displayed – but hey, I’ll take what I can get. 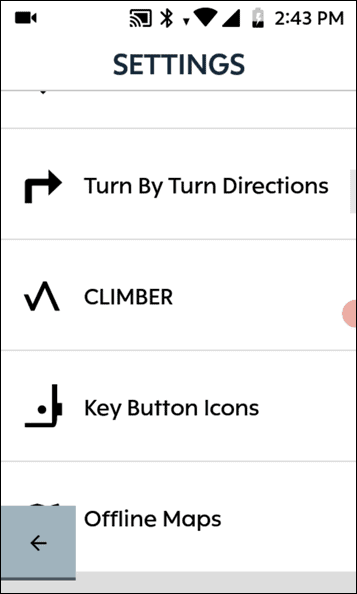 However, within that section are a few useful tidbits, notably, the ability to change which threshold of climbs it triggers on. Essentially it’s ‘All Climbs’, ‘Medium and Large Climbs’, and ‘Large Climbs’ only. The minimum threshold for any climb is 500m in duration, and 3% average grade over that climb duration. 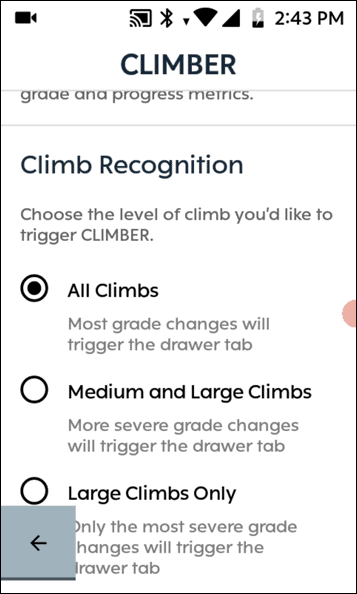 As for the definition of medium vs large, here’s how Hammerhead defines it:

Neither of which apply to me anywhere near where I live.

So off I went on a ride. On this ride I knew I’d be pushing the limits of the system, namely because I live in the Netherlands. Or more specifically, the northern portion of the Netherlands. There are some sections in the south that I could more easily trigger this on, but renting a car and driving 5 hours round-trip wasn’t in my Friday last-minute plans (especially for what would ultimately be somewhat disappointing ‘climbs’).

So instead I put together a nice 60KM route to the biggest hill in these parts, hoping it would trigger it. On paper, according to Strava, it’d be tight. The initial section was only 400m long, but far steeper than 3%. Then it leveled off slightly, before going up again a touch bit more. However, depending on where it was measured to – it’d be less than the 3%. 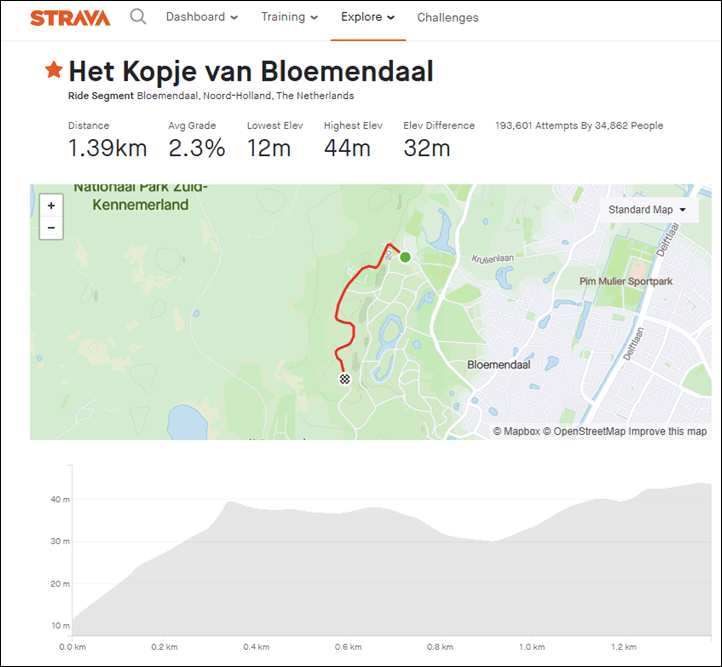 (I actually created a route that did this climb, and then the backside of the climb as well, which is a bit shorter and steeper, just in case.)

Then I let the Karoo do its sync thing, and all was well, ready to go.

Now, probably the biggest (negative) difference between the Hammerhead and Garmin implementation is that Hammerhead doesn’t show your climbs ahead of time. Meaning, on a Garmin Edge device, it’ll list all the climbs for your ride on a single page, and you can quickly iterate through them. So you can see you’re on ‘Climb 3 of 4’ (written below as Climb 3/4), and so on. Like this: 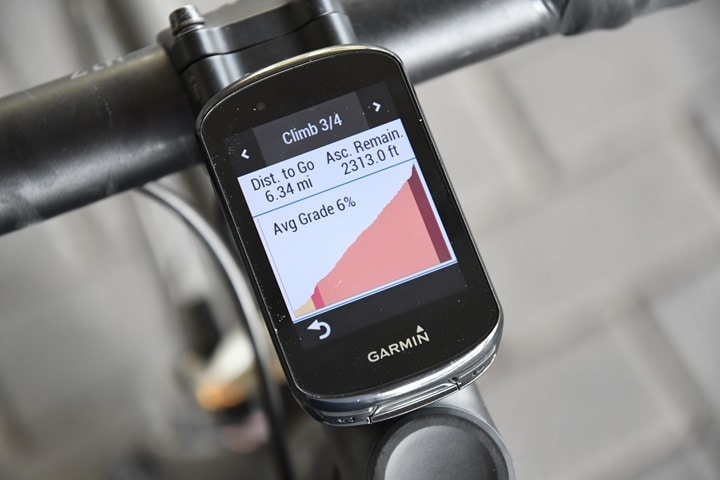 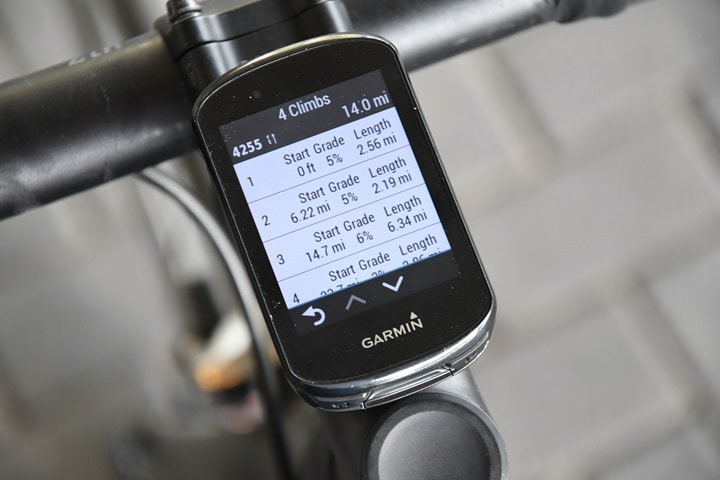 At this point, Hammerhead isn’t doing any of this. You’ll only see the climb when you arrive at it. Thus, I wouldn’t know whether or not my climb triggered the algorithm (enough) until about an hour of pedaling later. But normally speaking, I find it super helpful to know which climbs are remaining.

The good news is that Hammerhead agrees. It’s slated for inclusion in a future firmware update “soon”.

So, I’ve finally arrived at my main climb, and the Karoo will show a new ‘drawer’ as they call it, which basically pops up and says ‘Yo, climb time!’. In my case, the best news here was that I didn’t ride 2 hours and 20 minutes round-trip for nothing. It did indeed recognize this ‘climb’. 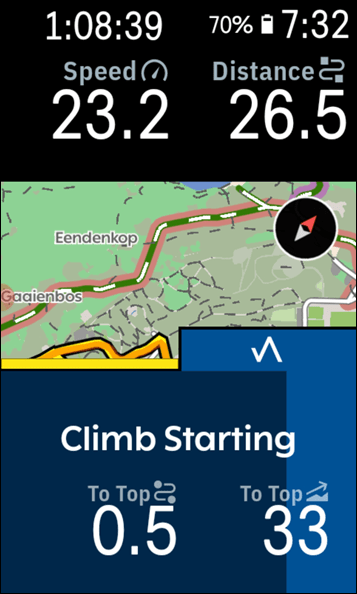 It’ll stay along the bottom of whatever page you’re currently on, or you can go full-screen with it. You’ll also note the yellow and orange tabs. The yellow is because I’m on a route and have a turn coming up, and then the orange is for the Strava Live Segment I’ve favorited on that climb. You can touch the tabs to switch between them. That mostly works, except when you’re on a cobbled-like surface in the rain with wet fingers while trying to ride hard.

Now in my case, this isn’t a super exciting screen. Namely, because my climb is short (as discussed previously), and not very long (also, discussed previously). Thus, as you can see, it’s kinda simple. Along the very bottom in those squares are 100m chunks, showing the gradient for the climb for the next upcoming 500 meters. While the middle colorful section is showing the entire climb, also with the colored gradient: 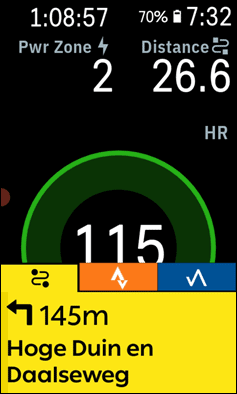 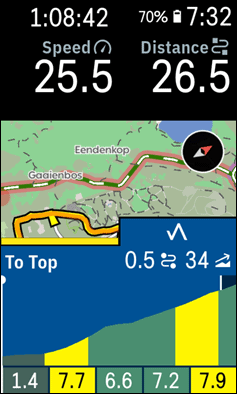 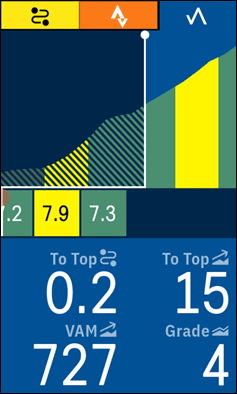 Here, this is a better (read: prettier) example from Karoo’s own page explaining it, with a ‘real climb’:

You can see how as you skip through each section of this climb, it’ll show the remaining distance and remaining altitude (climbing) to the top, as well as your current VAM (Vertical Ascent in Meters/Hour).

In fact, since we’re on the top of borrowing images, this image shows all the pieces on the screen, as well as the color-coding. Obviously, I make it a life goal to never see the purple or red colors: 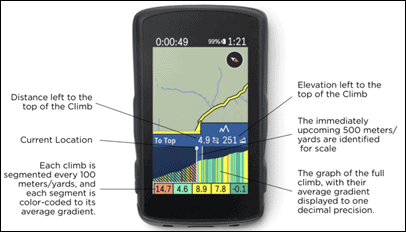 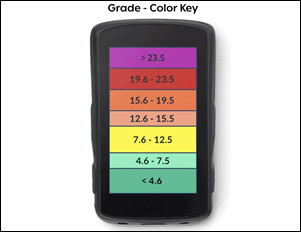 So, let’s get back to my far less colorful screen, in my case it went from both directions (both climbs) that I had created on the route: 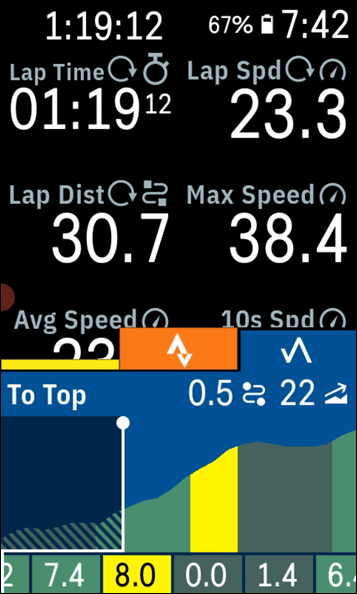 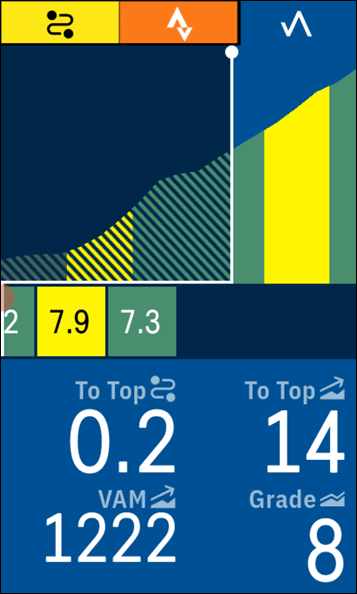 The bottom portion of the screen with the chunks of numbers ‘scrolls’ along as you climb, like a news ticker on TV, indicating how far within each 100-meter chunk you are. It’s really quite logical.

I did notice two items worthy of note:

A) If you join a climb mid-way, it doesn’t seem to trigger/recognize it. For fun, I went over the peak a 2nd time (or maybe a third time?) and then went up about 80% of the climb, in that case, it didn’t trigger.

B) Towards the top of the backside of the climb, I got some weird negative VAM and zero grade values. This was while still very much climbing. 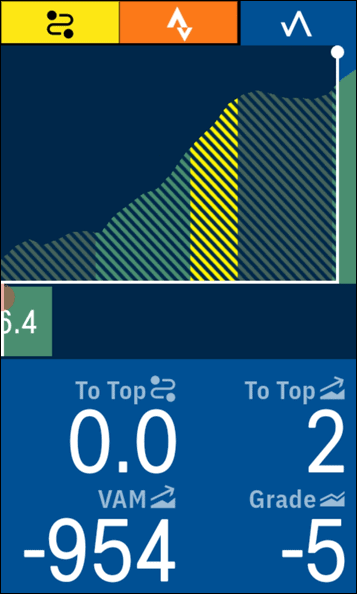 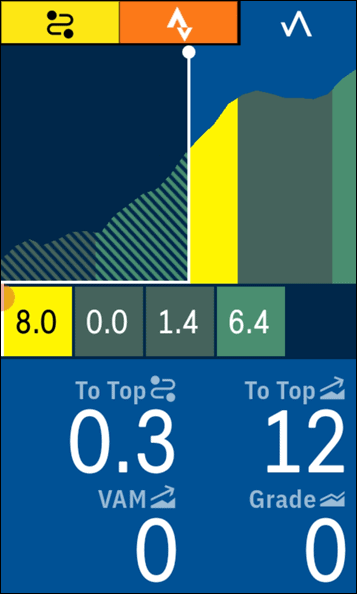 I’m not sure if that’s due to some totally unrelated issue, or something related to CLIMBER, or what. It only lasted a few seconds, and then seemed to go back to normal. Given my climb was hilariously short, it was more noticeable than someone slogging up a 14km climb for a long-ass time. 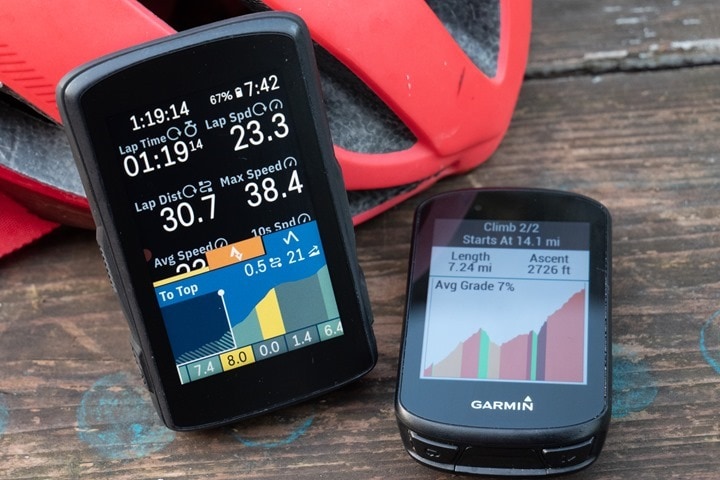 For the first go at things, Hammerhead’s implementation is quite good. As always, there’s room for improvement (just like there is on Garmin). But given the massive popularity of ClimbPro on Garmin devices, I’m sure many will want to know how this compares. Note, Wahoo doesn’t really have anything like this on their units. They will show the upcoming elevation profile for the route, but that’s very much not the same. Other head units have been doing that too for years. The key thing that ClimbPro & CLIMBER do is *smartly* automatically figure out your climbs, and show you stats to the top. So you know exactly how much suffering is remaining.

As noted, there are some key differences between this and Garmin’s implementation:

As I said at the beginning, I’m sure different features will appeal to different people. For me, on the whole, I think Hammerhead’s implementation mid-climb is clearer and largely better than Garmin’s. Except one absolutely critical missing thing: Showing the upcoming climbs and number of climbs remaining. It’s arguably as important as the mid-climb detail itself. At least, for me.

For example, to know that while you think you’re done for the day, but actually still have one more climb remaining – that’s super important. For example, doing Sa Calobra, after you finish the main climb that everyone talks about, what you don’t realize is there’s still a small series of lesser climbs till you’re finally done. That’s important.

Also, it’s worthwhile noting that while I’ve extensively tested and used ClimbPro over the last two years in all manner of horrendously long climbs, I obviously haven’t had the same chance with the Karoo’s CLIMBER, nor with any massive climbs. Still, I really like the direction they’re going here – and as I’ve noted many times, the pace of their firmware updates has continued to be impressive, with new features rolling out roughly every two weeks.

It’s this sort of progress, and the fact that their units are finally no longer on backorder, that’s going to drive them to probably being Garmin’s primary competitor in the years ahead.