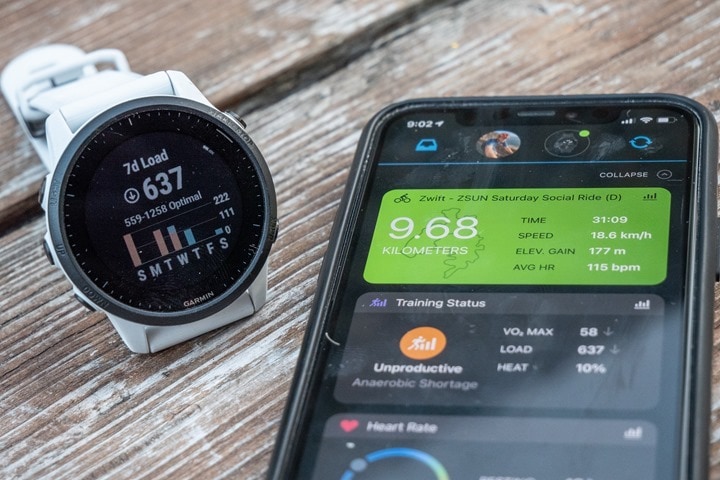 Garmin quietly rolled out an update yesterday that means you’ll now get training load updated on your Garmin devices for workouts done in Zwift, TrainerRoad, The Sufferfest, and the Tacx App, all without using a Garmin device to record them.

You’ve long been able to link up your Zwift/TrainerRoad/Sufferfest/Tacx app accounts to Garmin Connect, which then automatically sends completed rides/runs to Garmin Connect. However, those workouts didn’t accrue any training load or recovery time on your Garmin watch or bike computer. Thus, you still had to start a workout on your Garmin device, even for a simple indoor ride with Zwift. Else, you’d lack the correct data on your watch. But now, that’s no longer required.

I’ve been testing this feature for a few months, and it works pretty darn well. It doesn’t cover every single edge case, but it does nail the core pieces people (including myself) have been complaining about for years. And it sounds like this is sorta the first layer of that onion that Garmin is trying to peel back and sort out. All of which notably coming after the Firstbeat acquisition last year (almost exactly a year ago).

So, let’s walk through how it works with some handy before/after type photos and screenshots. But first, at its core, this is the basics of it:

1) Ensure your Zwift/TrainerRoad/Tacx app account is linked to Garmin Connect (if you did this before, you’re good to go)
2) Do a workout on one of those platforms, no need to start your watch
3) Post-workout, sync your watch, and it’ll now show the proper training load and recovery time

Note that your watch will sync automatically. So realistically that by the time you get out of the shower, it’ll have done all this for you behind the scenes. Unless you don’t shower after a workout, in which case training load is the least of your issues.

To begin, here’s my watch pre-ride. For this example I’ve got a nice easy recovery ride of sorts. But it shows exactly how this works. Note my current training load is 608, and as I got on my bike in the shed, my recovery time showed 0 hours: 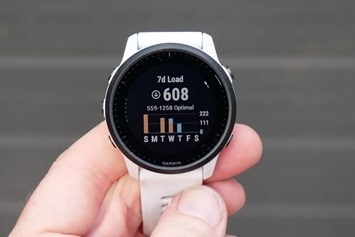 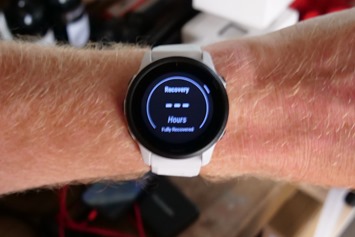 Now, I jump on Zwift. In this case, the *ONLY* device I’m using to record Zwift is Zwift itself. I’m wearing my watch, but not starting a workout. It doesn’t matter if you wear your watch (or, if an Edge device, if it’s sitting in your fridge). I’m just wearing it because that’s what you do with a watch. In any case, Zwift I go: 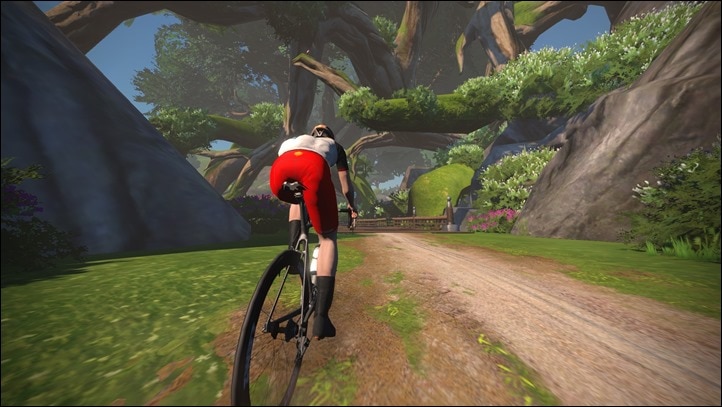 After completing the 30-minute ride, you’ll see the ride/workout show up on my Garmin Connect app. It’s labeled from Zwift, and even includes a nifty map outline:

(You can see how much I care about updating the default bike in Garmin Connect, for which I haven’t changed in exactly 10 years to the day)

Note: What follows is explaining how this works for geekiness, but practically speaking, again, if you take a shower, this all happens quietly and invisibly behind the scenes by the time you get the shampoo in your hair. There’s nothing you have to do here except ride your bike and save the workout on your Zwift/TrainerRoad/Sufferfest/Tacx app. That’s it.

However, what’s notable is at this very moment (for the next minute or so), my training load hasn’t actually updated yet – and it still shows 608. Why?

Well, that gets into the nuances of how Garmin Training Load works, which is actually calculated on the Garmin device itself (not on Garmin Connect). That leads to lots of other quirks (and benefits), but we’ll table that rabbit hole for the moment. What this means is that in order to calculate the training load, that Zwift workout needs to get to my watch. By default, Garmin Connect Mobile is always syncing in the background, so realistically this only takes about a minute or two until it shows up there. At which point, you’ll now see my increased training load on the watch (637 vs 608 prior): 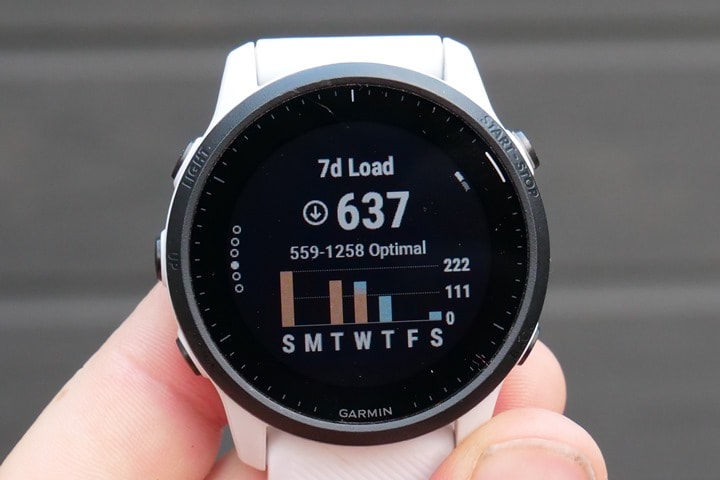 And, if you scroll down a bit, you’ll see my newly added recovery time too: 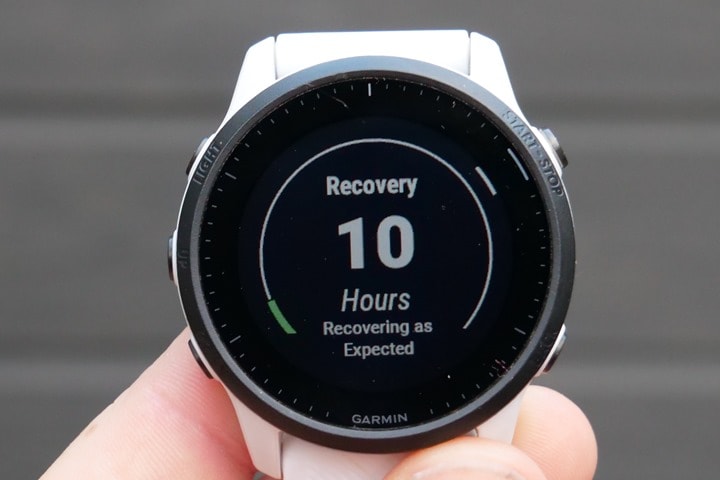 And thus, the circle of life is complete.

And again, all this happens for TrainerRoad the same way. Here’s what the watch looked like pre-ride, note the load of 523: 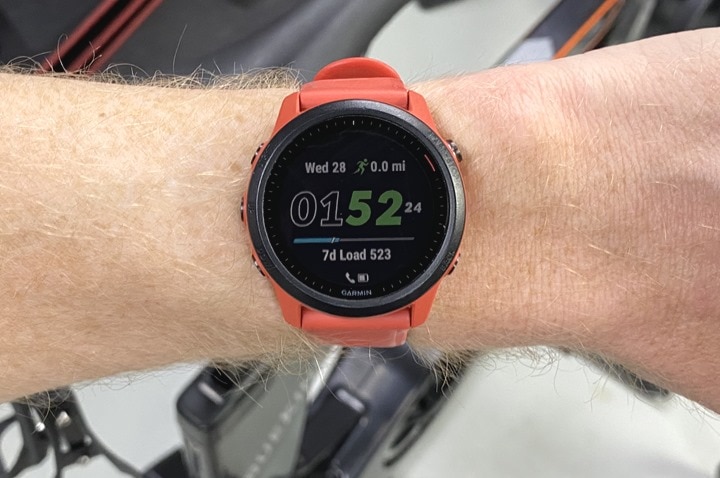 Then, I did the workout on TrainerRoad, without starting my watch: 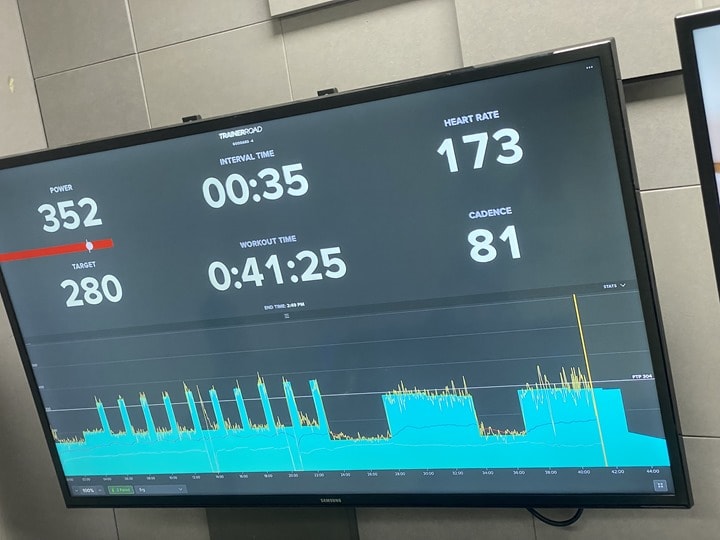 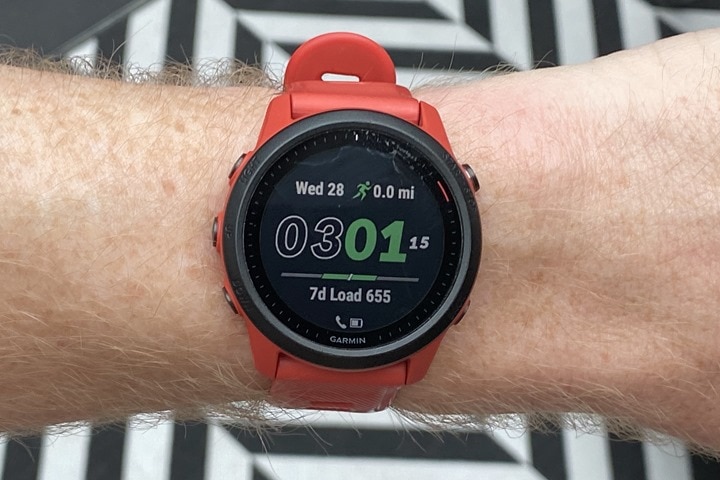 Now, I’m gonna take a stab at some FAQ’s here, though, I’m sure there will be plenty.

How do I connect Zwift to Garmin Connect?

Simply go here, and then link your accounts together.

How do I link up TrainerRoad to Garmin Connect?

Here’s a good article explaining it.

How is this different than Physio True-Up?

It’s part of Physio True-Up. That’s the feature that syncs your workout-related data between multiple devices so that if you do a ride on your Edge 530 it’ll sync to your Forerunner 945. Of course, in practice, we all know that can be messy. Though, I assure you – nobody has as messy an account as I do, with dozens upon dozens of devices. Garmin sticks pins in a Ray voodoo doll every time I stumble onto something with my Physio True-Up stats. Still, for the most part, it works until it doesn’t. The core sticking point is that training load is calculated on a per-device basis, so you can get weird sync issues, especially with not-always-on devices like an Edge.

Which devices does this support?

Essentially, anything with so-called ‘Training Load’, which means you’ll see a load-specific number somewhere on your device. The current list of devices supported by it:

Can other apps do this too?

Nope. At present, it’s just those four (Zwift/TrainerRoad/Sufferfest/Tacx), largely because those are the only four apps that have permissions to push completed workouts INTO Garmin Connect. Countless apps can receive workouts from Garmin Connect, but only these four are the anointed ones. I’ve long argued that Garmin could stand to gain quite a bit by allowing more apps to push into Garmin Connect (akin to how Strava works), and they’ve long ignored.

Will my Wahoo bike computer now update my Garmin watch?

Nope. Per the previous one, only workouts that come from those four sources are being calculated. Trust me, I tried.

Remember, it has to talk to your Garmin device. That’s especially notable for the Edge series devices, which you probably left powered off. Thus, if you want it to update training load in Garmin Connect, you need to power that device on and let it sync (both directions, or basically, twice). For watches, this happens pretty quickly in the background, so it’s less obvious.

Does this require anything on the Zwift/etc app?

Yes, it requires you use at least a heart rate monitor, and ideally a power meter source (trainer or power meter) for the most accurate data.

Does it show Training Effect?

No, not at this time. So you won’t get the Aerobic/Anaerobic breakouts of training effect. It sounds like this isn’t a case of ‘never’, but more a case of ‘trying not to boil the ocean’.

I’ve long noted that Garmin has historically held off on these sorts of deployments as they try and solve every single little aspect of it, rather than fixing the core issue that people primarily care about, and then circling back later to finish up the minor things most people don’t care about. So I’m actually glad we’ve got this today, versus waiting who knows how many months or something for things like Training Effect breakouts. Just my two cents though.

What about Zwift Running?

Don’t worry, while Zwift might ignore Zwift running, Garmin didn’t. A Zwift run with heart rate will provide Training Load, Training Effect, and Primary Benefit with one caveat, you will not get VO2Max estimates, as those require GPS speed/pace and so if you do not get one of those for 2 weeks outside, Training Status will go into a No Status state as it does today.

I’ll add more questions here as they come in.