And in just a matter of days it’s gone from freezing temps with once in a decade snowstorms and ice skating here in the Netherlands, to the warmest day ever recorded for yesterday (Feb 21st). And just like last weekend with going out ice skating on canals, this weekend I was out riding and enjoying the weather. Plus of course, looking at all sorts of other tech stuffs too. Let’s dive into it.

In general, Fridays have mostly become my catch-up day around the DCR Cave. Everything from updating posts/reviews with various content to answering the never-ending tide of unanswered e-mails, to cleaning and organizing both physical stuffs and digital stuffs. And that started during the day on Friday but continued into the night.

For example, I finally edited and added a couple of rolling pin comparison shots that I took earlier in the week, to the Garmin Enduro review (at the end of the ‘Unboxing’ section): 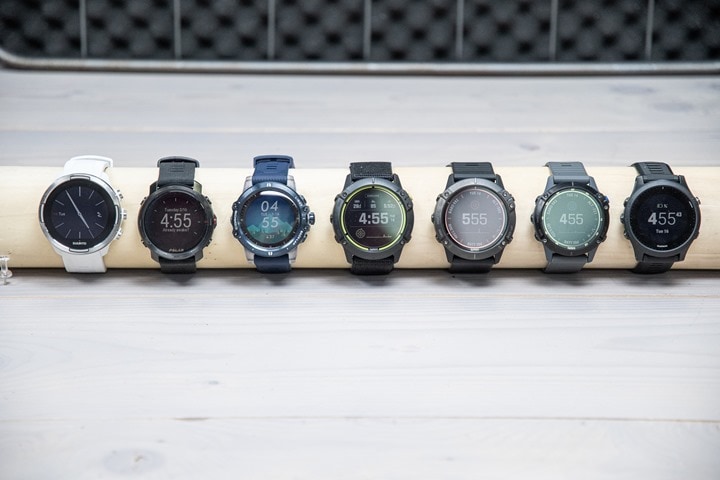 Then I offloaded all the SD & microSD cards’ worth of content that was shot in the past week, plus a few things from the week prior. These went onto local storage devices to then get moved in bulk at night to the network storage server (and backed up to the cloud). Was only 500-800GB this week. An easy week. This upcoming week will be 2-3x that probably, given the influx of reviews over the next 7-10 days. 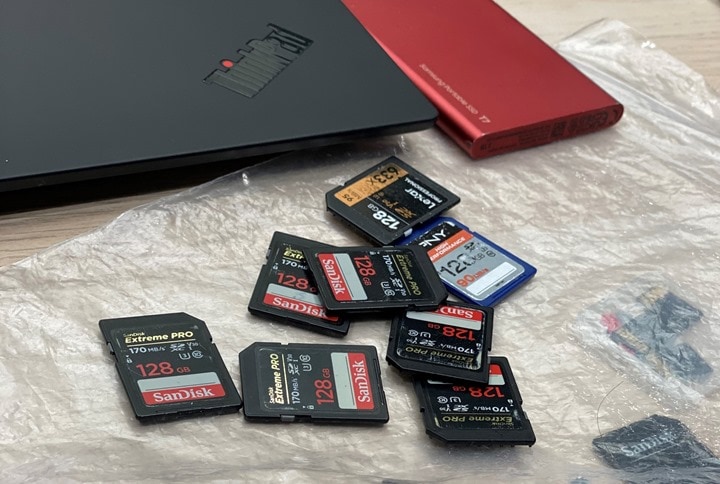 And then I re-set various things in the physical bins. I switched over to this a few weeks ago as a way to organize some of the reviews that weren’t always top of the mind. Meaning, there are big marquee reviews that I’m of course keenly mentally aware of. But there’s also lots of random things that I either buy or are sent over to check out, and sometimes these just fall under a pile of stuff (literally) and then slip by my mind. This way I’ve got a dedicated bin per device, and I can walk in each morning and see what I want to tackle. 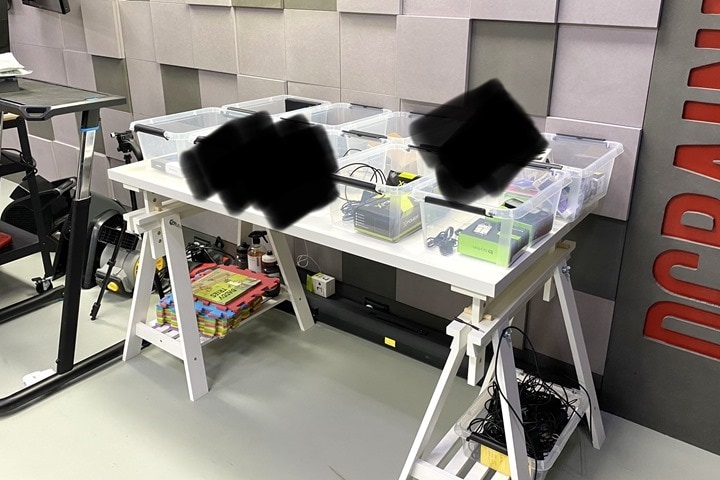 Also, for some of the devices it makes it easier to organize all the random pieces. Like Scosche sent a gazillion straps and a few extra units, so I have them all in one bin, making it easier to get back to them later, so I don’t have to play squirrel and figure out where everything went.

2) Mountain Biking with The Kids

With the sun deciding to return to the Netherlands, we decided to make a loop around the forest letting the two older girls take turns on the mountain bike. My mountain bike, to be specific. Now, while that bike is waaay too bike for them, last fall I bought the Shotgun seat for it, based on some friends in Colorado and Nevada using it and their kids loving it. Essentially it’s a seat that attaches over the top-tube, but uses a five-point contact system with foam/rubber in between, thus, not damaging your frame – and distributing the load across multiple points (including your handlebars, since that’s what the kids are holding onto). We didn’t buy the accessory handlebars from them, though, we did buy the ‘Shred till Bed’ alphabet reading book. 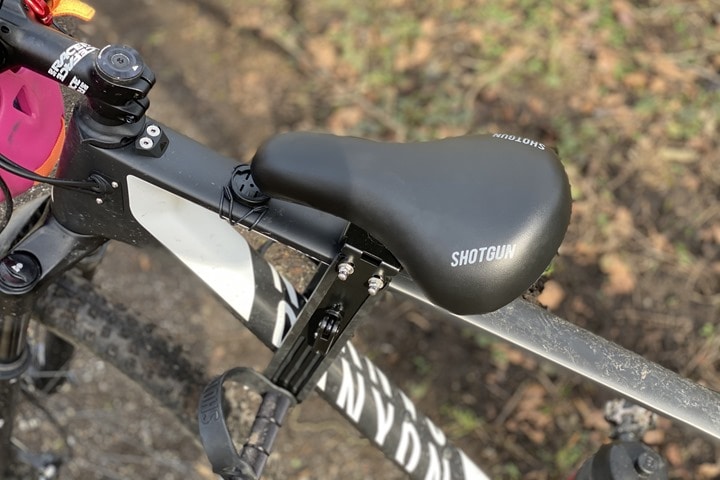 There’s no seatbelt or such on this seat, it’s just a seat, and then the child’s feet go into these little loops down below. You could take off the loops easily if you wanted to, but that seemed like a poor choice for our children right now. 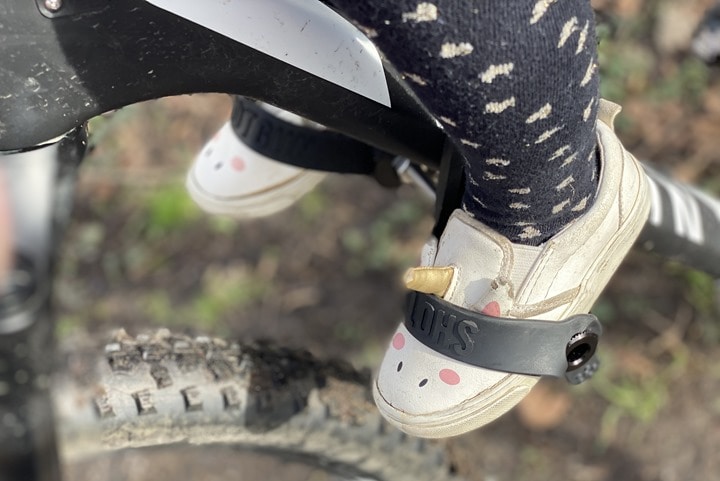 Also, we attached Baby and her seat. Because, obviously, that was a condition for riding, according to my middle daughter. 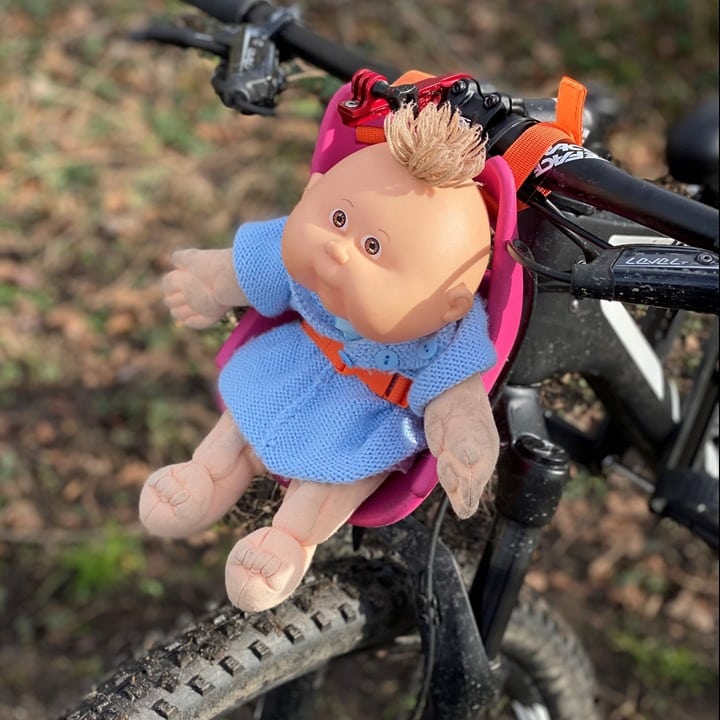 And then off we went. Mind you, while there are some legit mountain bike trails (more cross-bike really) very nearby, we kept things simple and tame on mostly all flat ground trails. 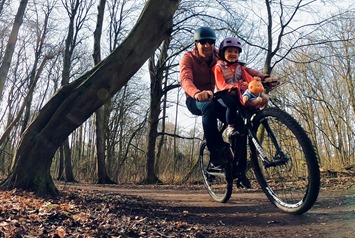 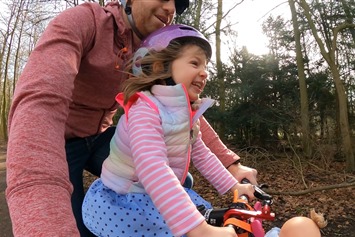 Both girls had a blast, while they switched in and out of the cargo bike with the third Peanut hanging out there the entire time. 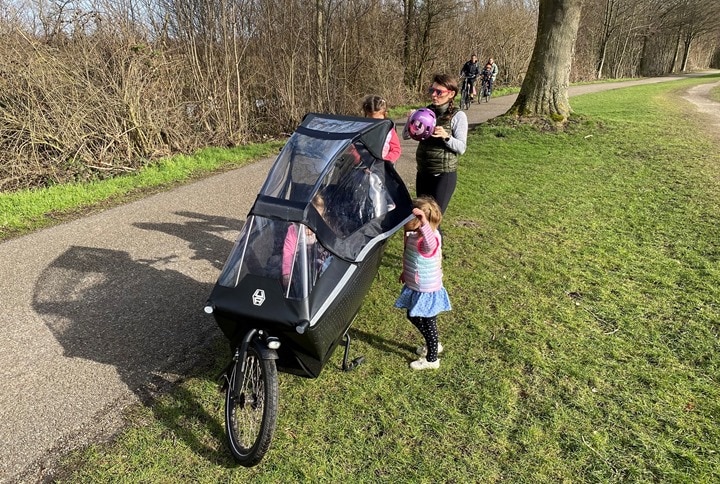 I know many owners of this seat do far more impressive trails, but, this works for us. Afterwards, the kids went mountain biking on their own: 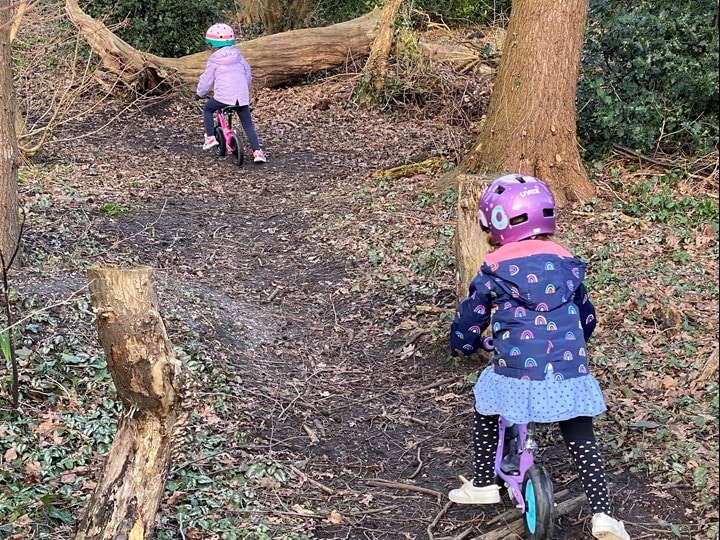 Also – with all the humans in our family having at least one, if not two bikes now – the shed bike situation is quickly getting out of control.

3) Zwifting in the dark

Saturday night after our mountain biking adventure, and after the kids were in bed, I headed out to the shed to get in my ‘real’ ride. I couldn’t decide on a workout or a group ride that I wanted, so I just went with a structured workout on Zwift. In general, I almost always do just one of two: Jon’s Mix – short or long. 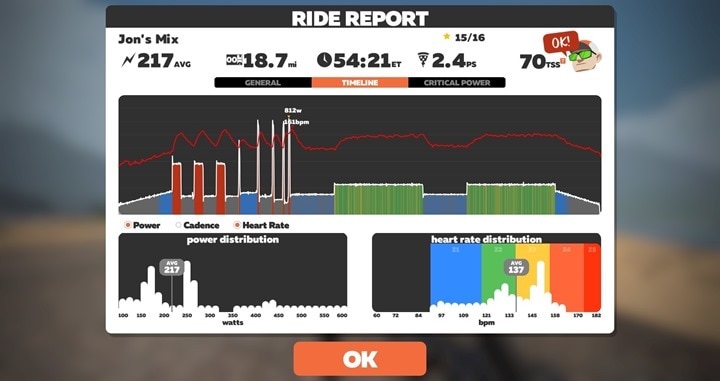 These two workouts were actually designed by Jon Mayfield, one of the co-founders of Zwift, to test various devices and the platform itself. And they actually do a really good job of that. Also, they do just fine as a workout. They probably don’t target some specific area to work on, but hey…I just wanted something mindless. 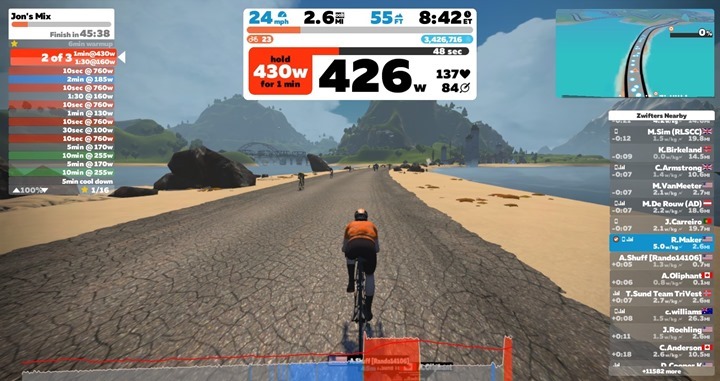 For some reason I thought the GoPro would be able to pull off the low-light shot in the shed with the shed lights off, using just the intensity light from below the Tacx NEO 2, along with my screen (Zwift on my laptop and YouTube up on the mounted screen). But with the GoPro Max Lens Mod, it doesn’t have as much flexibility for a night mode. So…I got this as a result: 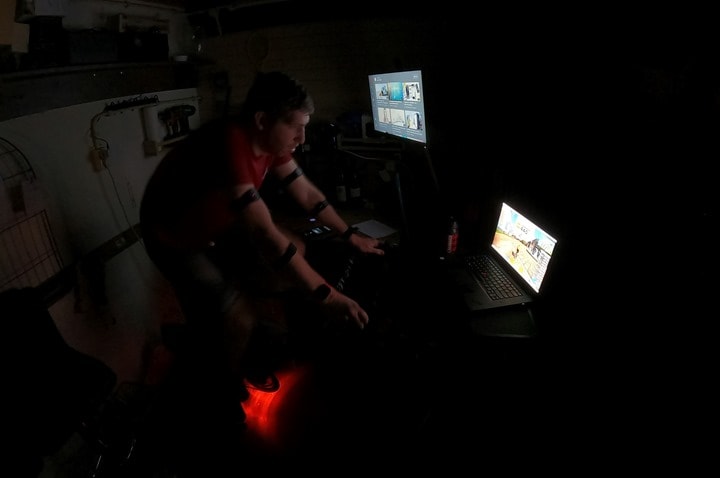 Had I had the other lens on, it’d probably be fine. In any case, here’s what it looks like normally – and bringing home this $59 trainer laptop/tablet stand to wrap up testing on it: 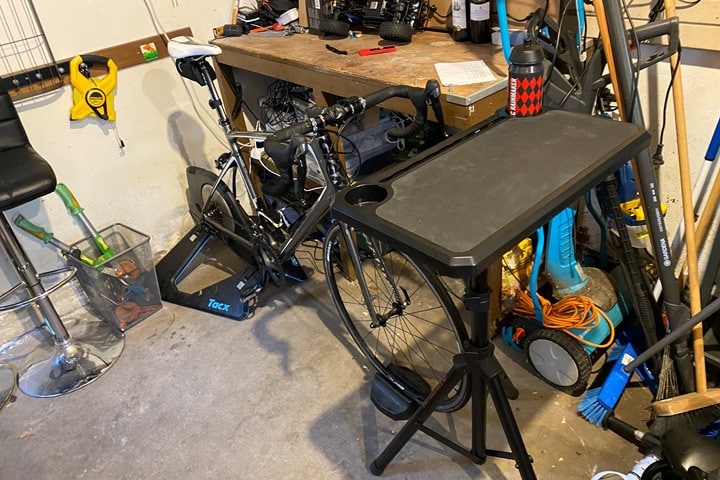 Nothing fancy. One of my older road bikes with an older trainer and a work bench.

Yesterday I traveled with one of the Peanuts down to Leiden to go for a ride with one of her/our friends. A gigantic loop of the area, ultimately going through the dunes that buffer the beaches, before a quick stop at the beach and then continuing on. They had an Urban Arrow cargo bike, like ours, she hung out in. 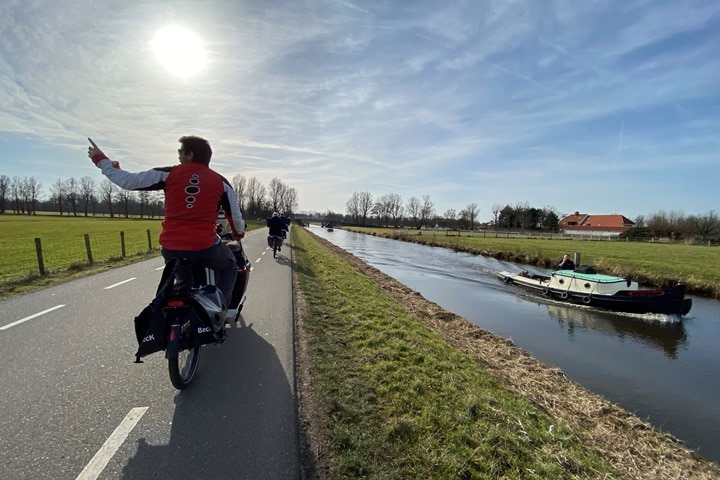 While I borrowed this noble steed: 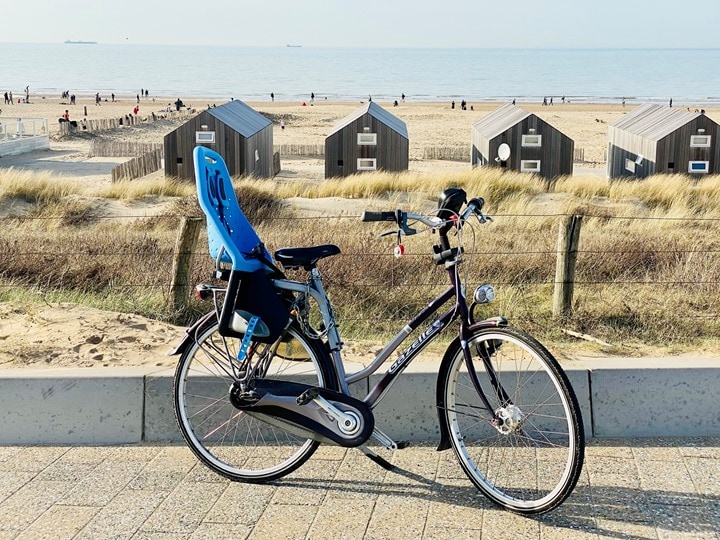 The route was mostly flat, except the dunes, which are not flat. While my rear tire needed a bit of air, it did give me a good workout for the afternoon. 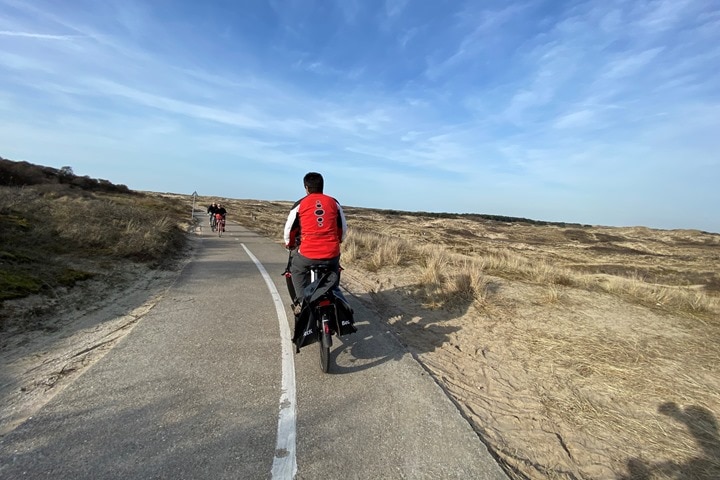 It’s astounding that exactly a week prior we were ice skating on frozen canals. And then this weekend we were in t-shirt weather, and people were literally swimming out in canals and lakes as we pedaled past. Mind you – those folks be crazy. Also note below, some smaller drainage canals still frozen. 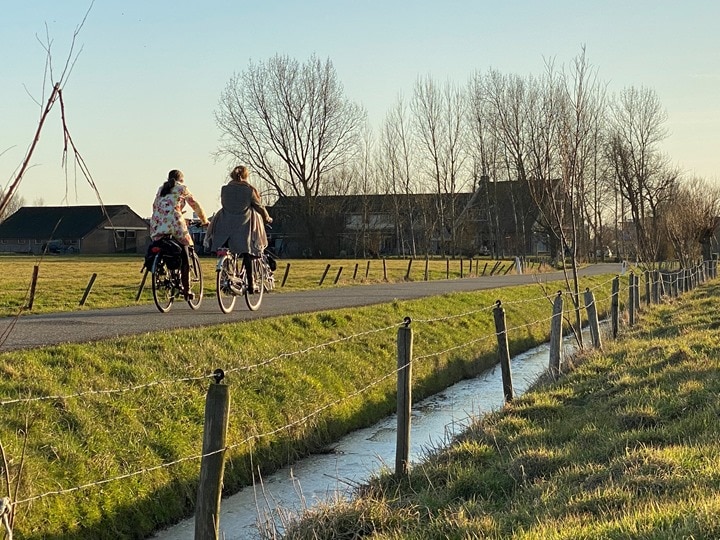 Along the way, we made a few stops, mostly for farm animals. Because, that’s what you do with kiddos. Or, when you see ostriches. 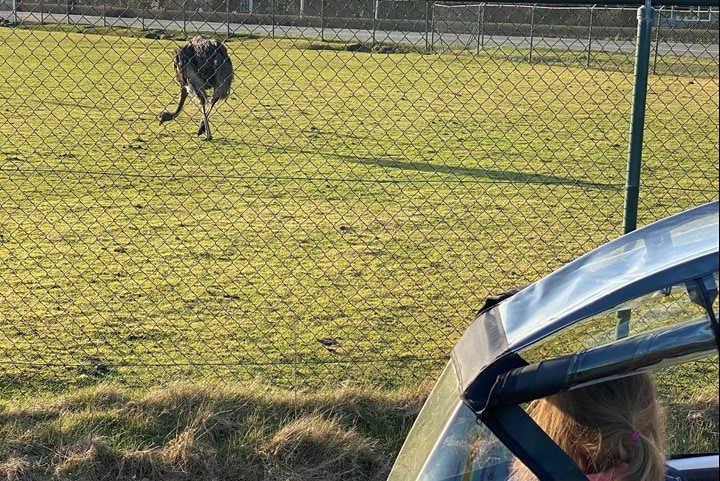 All in all, about 3.5 hours of sunny weekend goodness. And, it’s supposed to stay sunny like this for a week or so. Woot!

Last week in my in-depth review I shared a number of data files of Garmin Enduro battery burn data. For those unfamiliar, the short version is that it appears to easily take the ‘longest GPS battery life’ watch crown, no matter which mode you choose. But being winter, there’s only so much opportunity for t-shirt weather to be able to wear it on your wrist having optical HR enabled a well as getting some solar data (meaning, it’s not under a coat). So while I’ve got data from rides up to 5 hours longer, most of that is under the coat.

But yesterday’s weather was so nice…compared with the maybe kinda flat-tire on this Dutch bike, that I discarded my coat pretty much instantly – leaving the watch out in the open for 3.5hrs. And thus, a bit more battery data. The below chart shows GPS+GLONASS at 1-second recording rates, optical HR enabled, Bluetooth connected to my phone (with smartphone notifications enabled), and all the other stock settings:

The key thing there being the battery burn rate at 1.14%/hour, with an estimated capacity of 87 hours! All of this is done via the DCR Analyzer, which works on files from Garmin, Wahoo, and Stages devices (which are the only ones that properly write the battery burn data to the .FIT files).

Remember, the claimed battery life here is 70hrs no-solar, and 80hrs solar (assuming 3hrs of 50,000lux per day). So this coming in at 87hrs of estimated capacity time based on the current battery burn profile which, would include some solar ‘help’.

But how much help? Well, that’s tougher. See, Garmin does have a solar intensity widget on the watch, and does also log some of it to Garmin Connect Mobile as well. Here’s what you see there, though, you can’t turn this sideways like most other charts using the same format on Garmin Connect Mobile. Just the vertical option:

It’s kinda hard to say based on that what the average intensity is in more detail for just that ride. I’d guess the ‘average’ was between 30-50% solar intensity. And I have zero idea on the lux, thus, I just ordered a lux meter on Amazon.

What I’d like to see though is Garmin add it to their charts on Garmin Connect and the app, specifically here below temperature. And then also simply add a solar section to the overall stats, also below temperature, that says ‘Average Intensity’, ‘Max Intensity’. No reason for ‘min intensity’, since that’ll obviously be 0 many times as you turn your body or such. 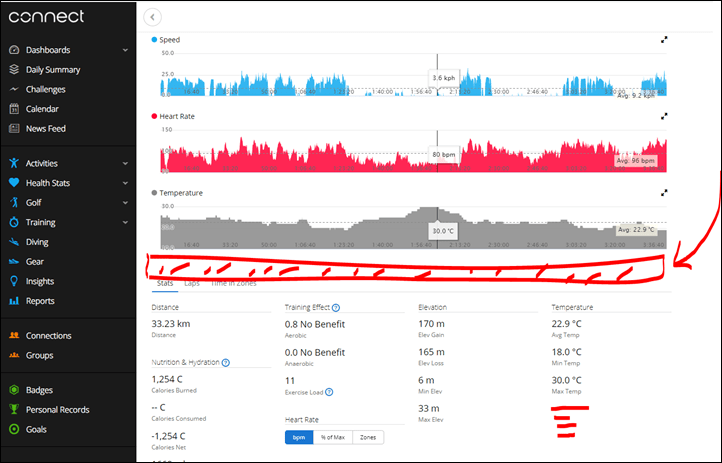 And heck – in an ideal world, they’d also show how many hours you gained by solar. Either way, from a purely marketing standpoint, I think this is valuable because it reminds people that on existing solar-enabled devices the solar is in theory doing something. Otherwise, I think people kinda just go ‘shrug’. And while the existing Fenix 6 Solar units might not have too much of a meaningful impact from solar, it is definitely far more impactful on the Instinct Solar and now the Enduro. Albeit due to totally different reasons for each (way bigger solar panel on Instinct, whereas far better underlying battery life on Enduro).

In any case, enough battery chatter for now. Back to writing other posts.