It’s officially summer! And while it’d be easy to say that’s now including weather here in the Netherlands, the reality is that it’s basically been hot since late March. No kidding, it’s been amazing for outdoor-like activity. However, this week it’s gonna get legit hot. More on that in a second. First up, here’s what I’ve been up to the last few days!

For those following along on Instagram Stories, you’ll know I recently bought a stand-up paddle board (SUP). Actually, so did The Girl. With so many waterways in Amsterdam and beyond, it just seemed silly not to be able to enjoy them. Heck, the DCR Cave is literally surrounded by a moat that connects to all the waterways.

So I’ve been floating my way around the area the last few weeks. And so I decided to go for a meander through the forests of the Amsterdam Bos. I’ve fashioned a way to put the inflatable SUP on the side of the Urban Arrow cargo bike. I know I could just inflate it wherever I’m going. But realistically that takes like 5-7 mins. This takes 10 seconds. I used a bungee cord to attach one end to the kids’ seat, and then used a dog-leash to attach the other end to the front of the bike. Seriously, it’s brilliant and works incredibly well. 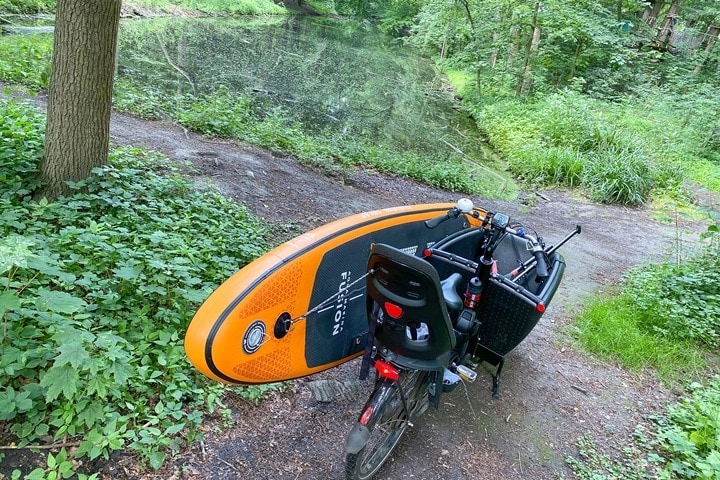 After finding my random spot near the end of one of the waterways, I plopped in. I was testing out the Casio GBD-H1000. 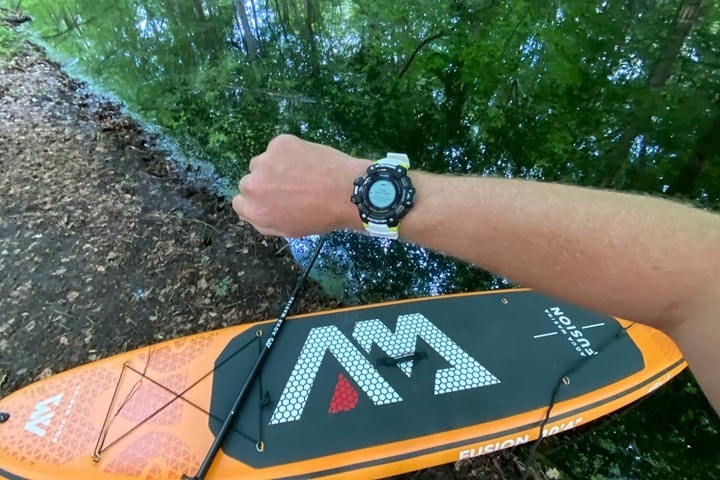 The first part of this journey was a giant dumpster fire. Turns out this section isn’t maintained, so lots of downed trees and such just under the surface. However, about 800m later, it opened up to actual marked waterways, and was great! 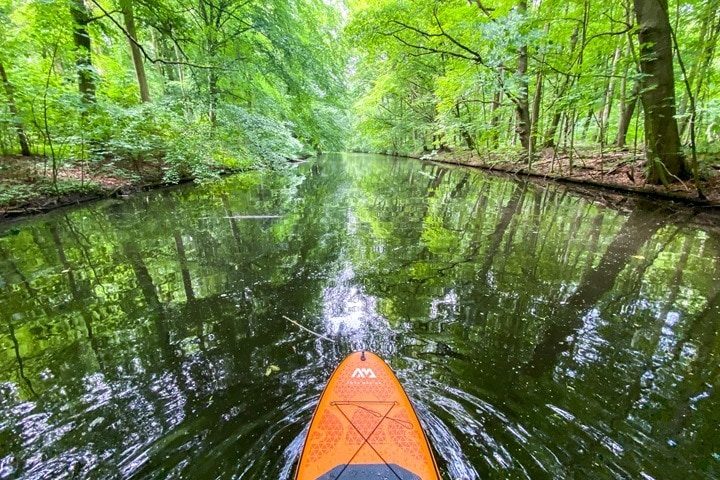 The entire loop was 5.5KM long, and pretty darn quiet. Somewhere out there you can also rent water stuffs too, but it’s not just to plop in and get paddling. After I was done I simply hooked the SUP back up to the bike and paddled back to the office.

2) Trying out the Karoo v2 Interface

Ok, technically speaking I’ve been doing this for like a month or something. I just finally got around to taking photos of it and writing about it. So, late Friday after I went out for a quick loop to get some final photos/screenshots for my post.

What’s semi-unique about the Hammerhead Karoo is that it runs Android, and as such I can run screen recording tools on it. This makes my life a heck of a lot easier for capturing the screen and what’s going on, because I can just record a screen capture of my entire ride, and then take screenshots from that video file quickly and efficiently. I end up with a roughly 500-750MB file, versus a gazillion GB’s of GoPro/phone/etc footage that isn’t as readable.

In fact, if you look at this photo closely, you’ll notice the small red dot in the lower right corner, that’s how I can start the screen recording. I forgot to hide it for this photo. 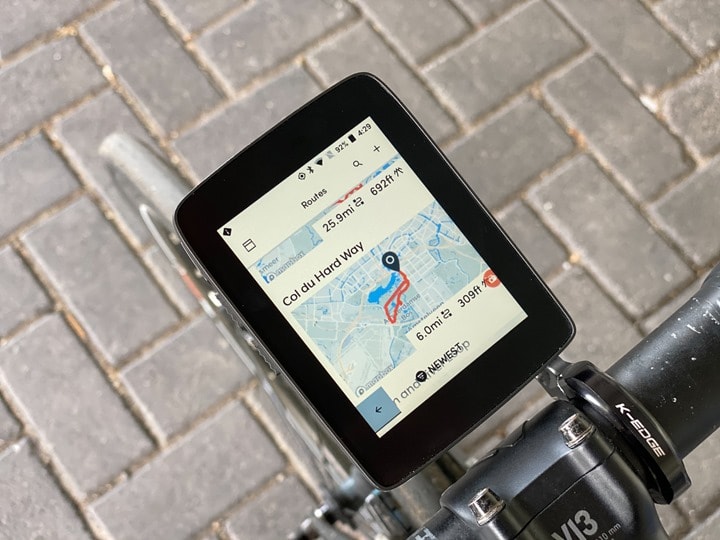 Albeit, getting the Karoo setup that way does take a little bit of work, but it’s not too bad. I wish there was some way to screen-record (video) a Garmin or Wahoo unit. You can screen-capture individual screenshots (configurable in settings), but nothing to do real-time video capture of the screen that I’m aware of.

When I lived in the US and even occasionally when I travel there, I rent camera gear. Historically it’s been longer lenses for certain vacation trips, but also sometimes specific cameras I want to try out. Renting them for a week to use is much cheaper than buying them and finding out they suck.

However I haven’t done that much in Europe. Actually, ever. But last week I ended up finding out about a camera gear rental place that’s just a 10 minute pedal from me. Massive selection online, crazy simple pickup nearby. Boom…get out my credit card and things are gonna get dangerous!

I ended up renting the Laowa 24mm probe lens. Camera geeks will have seen videos on it for sure (if not, watch this one from MKBHD). I had a few specific video shots I wanted for a handful of reviews coming up. I didn’t really want to buy such an expensive lens for what is undoubtedly minimal use cases. So I rented it instead. Plus rented a Metabones Speed Booster to adapt to my Panasonic GH5 camera that I use for video.

I don’t have any product-specific pictures to share with you right now. But here’s a silly photo I took while learning the lens. 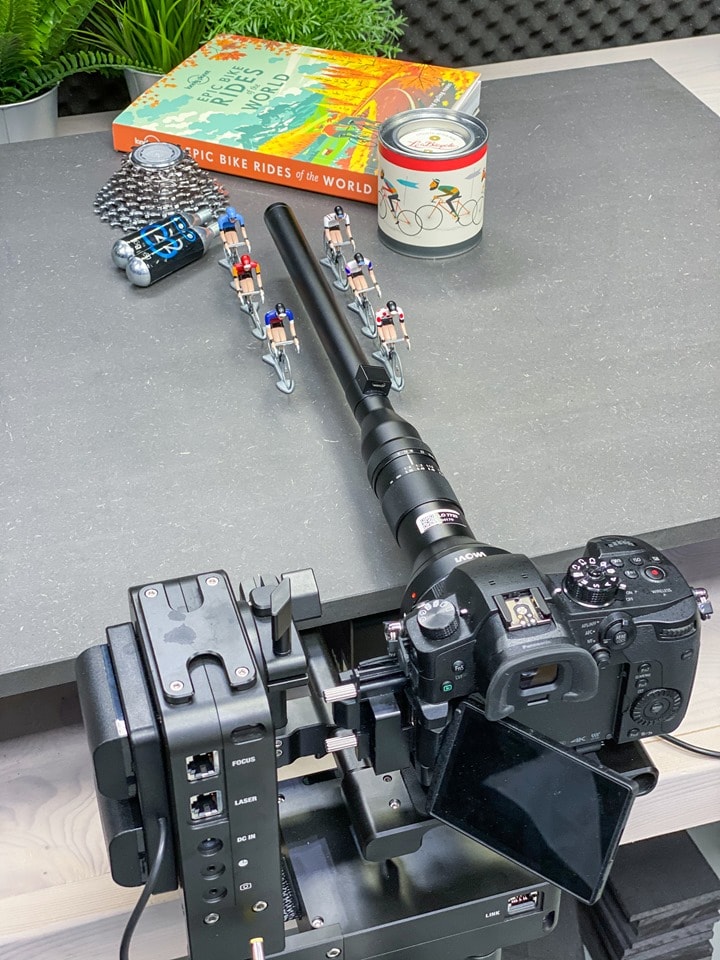 Though, the cool part is that I had put that entire board on a slider, so rather than the camera moving backwards in this shot, the board actually moved. Super slick.

I’ll note that the amount of light you have to throw at the lens is unreal. My main studio here is fairly well lit these days. I have a ton of light in there. But I ended up having to move two 5-bulb soft boxes directly on top of the objects I was filming (about a foot/30cm away). It was insane. Super glad I didn’t buy this lens, cause frankly it’s a pain in the ass to work with.

But, it was fun to try out for a few days. Which ultimately, meant I pedaled back Friday evening just before closing to drop it off: 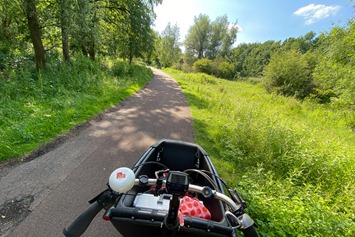 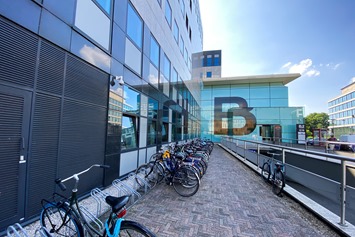 Through the woods, past the fuzzy cows, and over to their rental facility on the ground floor of a popular co-working space here in the city. I actually looked into that space initially. Cool spot, though, super happy with the space we have now.

One of the great things about the DCR Cave is that it’s under a 4-5 story building. As such, it tends to stay a fairly constant temperature for about 9-10 months of the year. Last year, that was closer to 10-11 months, as it was a cooler summer here in the Netherlands. We’ve got some water-fed radiators that the building at large pumps the water from, so that helps top off the heat in the winter.

The other great thing is that through the magic of weird building design, we’ve actually got a skylight too. So as I sit here right now, I’m both under a 5-story building and with a skylight. Yes, it’s special. See, The Girl is actually wearing sunglasses inside right now sitting at our desk. For realz, picture not staged. In another 30 mins, I will too. 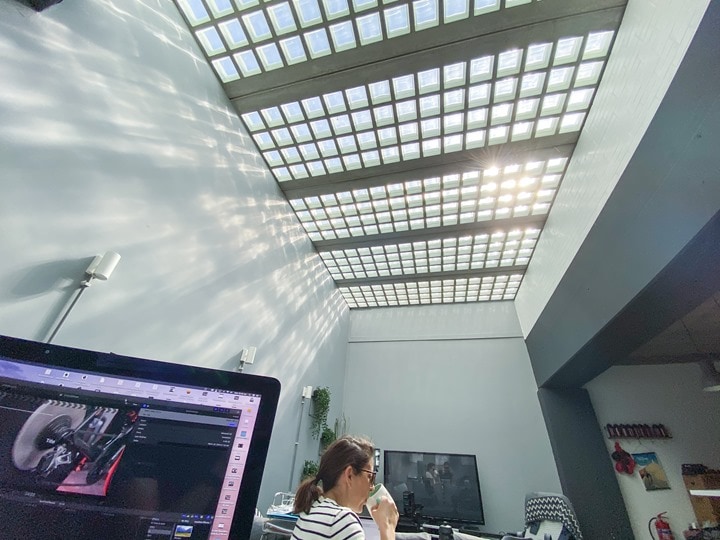 In any case, all this is great except for one minor problem: We get baked all summer.

No, not in the typical Amsterdam way. But rather the more universal sunscreen application way.

But back in Paris I earned my certificate for installing portable air conditions (in the least professional manner possible). We had to for both the CupCakery and the Cake Studio, otherwise things would melt (literally). Give me a hammer drill and a concrete wall…and I’ll solve any ventilation problem. Thankfully, in the Amsterdam DCR Cave it’s much easier. So Saturday afternoon I went down to the DCR Cave to get it all set up. A calm before the storm. I connected it up to some outbound air ventilation, and as long as the bathroom fan stays running, it’ll push the hot air to the outside world. And then the outbound water simply goes via hose into our kitchen sink. 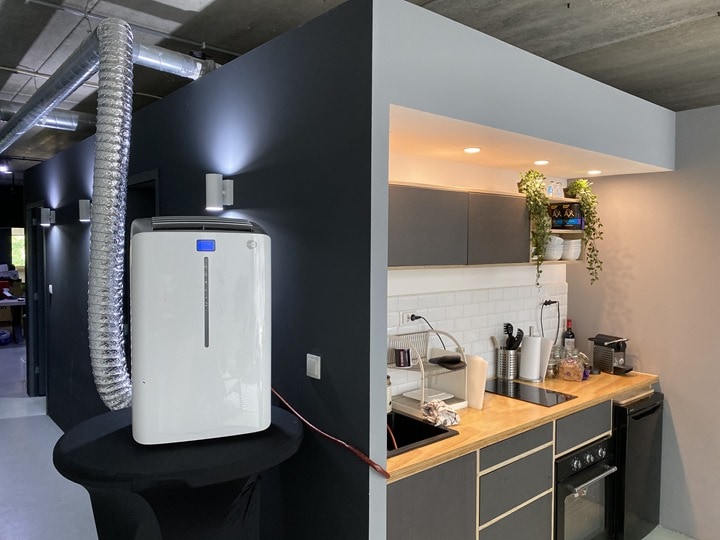 Of course, this portable A/C unit is most definitely not rated to cool this big of space well. But the one thing I learned in Paris cooling spaces is that given enough time and persistence, you can eventually cool almost anything. Mostly.

However, the upstairs area of the DCR Cave also has a gigantic open stairway thing from upstairs to downstairs (we have two stairways). You can see it in Lama’s video here towards the end. So, I fashioned a cover for it this morning, and I’ll make a little door for it later on. That way we can still go out it, but it’s not a car-sized cold-air escape hatch. A quick buzz to make the sheet shorter, add some paint, and done: 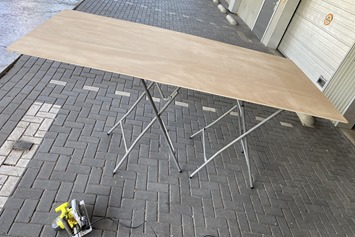 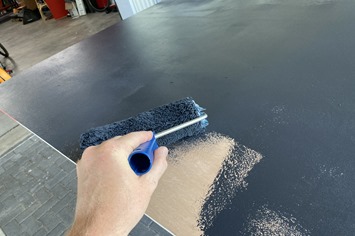 With that, we’re ready for the nearly 90°F/32°C weather expected this week. And given how hot the spring as been, I’m sure it’ll continue all summer. 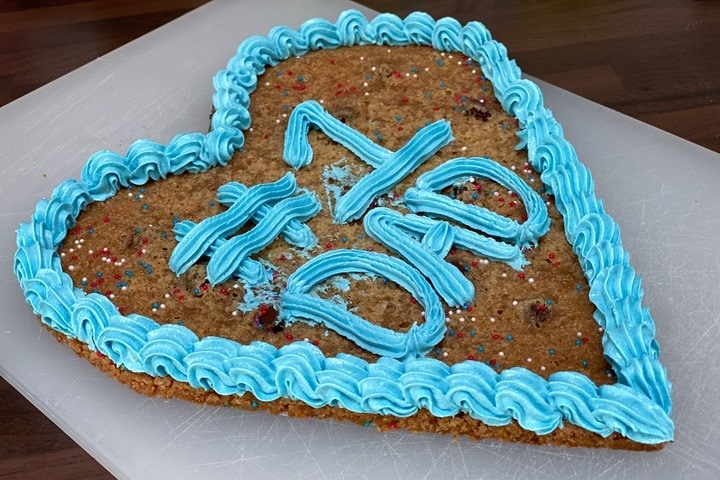 With Sunday morning being Father’s Day, I got the bestest present ever from my three Peanuts: Sleep.

So much so that I woke up around 12:30PM. Which, was amazing – about 11 hours of sleep. Though, somehow the Whoop band thought I was the least recovered it had ever recorded (12%). Because of course it did. Mind you, the next tab tells me to note “How good this feels”.

In case you’re wondering why I’m still wearing that thing, I’ve been meaning to finish shooting a YouTube video about it, and just haven’t had the chance to do so. So I want to have ‘live’ data for that. Hopefully I’ll finally knock that out this week.

Though inversely, the Garmin Fenix 6 didn’t catch me falling back asleep after quickly feeding the baby around 8AM. This is where I really think Garmin needs to focus on finding a way to account for extra sleep (aka naps). While I could (and did) tweak the stated sleep to the correct end-time, it doesn’t re-calculate all the under the cover bits like tweaking the Whoop sleep times do.

In any event, after that point I just relaxed and enjoyed the rest of the sunny day with the kiddos doing absolutely nothing except playing in the backyard. Perfect!

Oh, and eating the cookie cake. Some little Peanut fingers may or may not have poked the icing a few times prior to that photo.