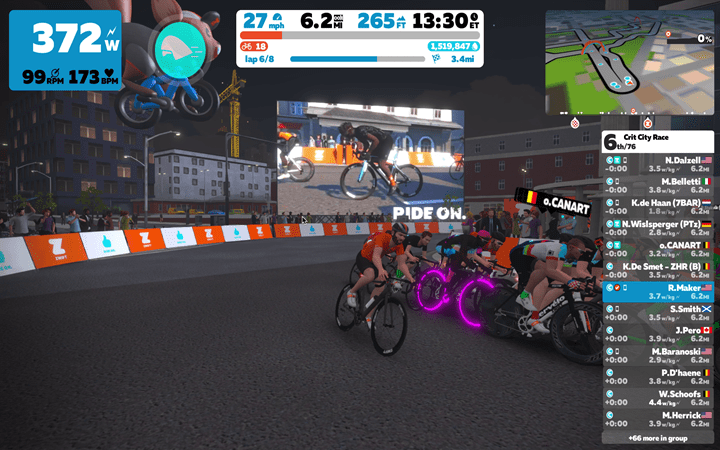 To my surprise, that was more fun than I expected.

Also, it hurt my lungs more than I had planned for this Saturday afternoon.

First however, let’s back this bike up though. Not too far though, because it’s Saturday night and I’ve got a bottle of wine to attend to.

As you may remember last Friday, Zwift officially announced their new crit course, ‘Crit City’. For those not familiar with crits, it’s short for criterium, and is when cyclists go round and round a typically very short course. There’s various formats involved, but often it’s a set time (as opposed to a set number of laps). It’s usually a very short route (1-3KM) repeated as many times as required. They also usually have a lot of sharp corners and are often designed to be technical – so you have to think about how to enter/exit turns. Also, you have to avoid crashing.

But in Zwift, none of that really applies. You just gotta have the legs and lungs to hold on for dear life, and a tiny bit of brain power leftover for race tactics, like when to attack or not…which is mostly tied back into how your legs and lungs feel.

The first thing to know about Crit City is that it’s an event-only route. Meaning that you can’t just go ride it, you have to join an actual scheduled event on it. This weekend they’re running races roughly every couple hours at usually 30-minutes past the hour. Just scroll through the Zwift Companion app on your phone and you’ll see one sooner or later.

The route is 1.94KM long (1.2mi), plus there’s a little bit of a lead-in on the first lap from the starting corrals. The Crit City route is not within any real-world town, which is somewhat disappointing. I’d have loved to see them pick an actual city and design an actual crit map atop it (or take one of the hundreds or thousands of real-life ones that exist). Instead, after you upload your ride you’ll find it’s atop a volcano in the South Pacific, fairly close to Watopia island (but not really within ridable distance). You don’t, however, see any part of Watopia from the course.

What’s most notable here are the 90° turns, but also the short little hills. Not really hills per se, more like accidental speed bumps at only 7.9 meters of elevation gain per lap. Either way, you’ll briefly feel them.

Also within the course is a ‘Prime’, which is effectively enumerated as a sprint just like any other sprint to the line in Zwift. You don’t earn any sort of prime bonus best I can tell, at least on this weekend’s races. Down the road you could.

And that’s ultimately an important thing to keep in mind: The actual race organizer will set how long that given event is. All of the Crit City events this weekend are a mere 8 laps – giving you a total of 15.2KM/9.6mi.

This may be the juncture where I point out that I’m ‘officially’ a triathlete (yes, I still raced at least one triathlon this year). As such, my triathlete card states that doing crits is a poor life choice. Mostly because any triathlete, handling any bike in a fast moving group of other humans, often results in less than optimal ground contact situations. As such, I’ve actually never had a good reason to do a crit, real life or otherwise.

However, I cracked open the Zwift companion app today and saw it on the list. But as you can see – things clearly aren’t fully baked yet from a Zwift perspective. For example, there’s no preview map of the race route within the companion app: 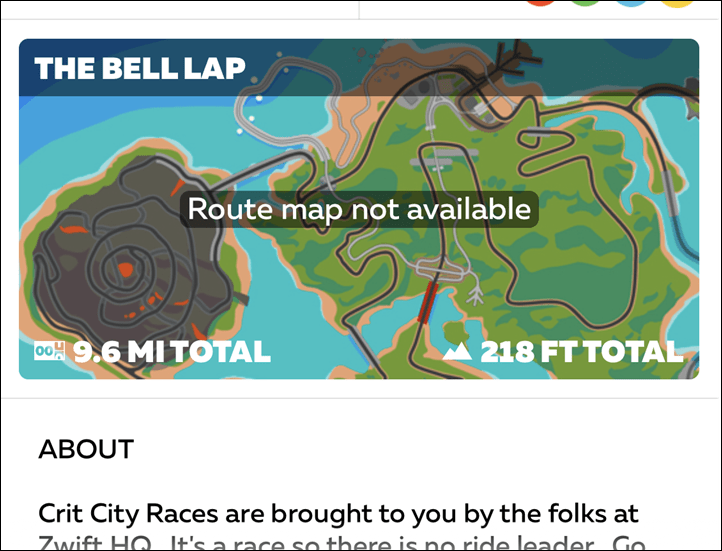 In my case, I joined with a CAT C grouping, in total about 276 people were registered for the event, with about 75 or so in my category. I usually ‘race’ in Zwift in CAT C. I use the word ‘race’ somewhat liberally, because I’m rarely competing for anything. I generally end up in the top 20-25% assuming Zwift doesn’t crash/freeze/whatever else along the way (which, happens more than it should during races or large group events).

Here’s what all of the Crit City ones this weekend look like within the app:

Two failed attempts to join earlier in the day due to technical and then toddler reasons, I found myself at 3:30PM today finally ready to roll. Well, 3:32PM actually. They staggered the group starts, though it doesn’t matter much because you only see your own group on course. With one toddler down for a nap and the other reasonably occupied for the duration of the race, I joined about 30 or so seconds before it started: 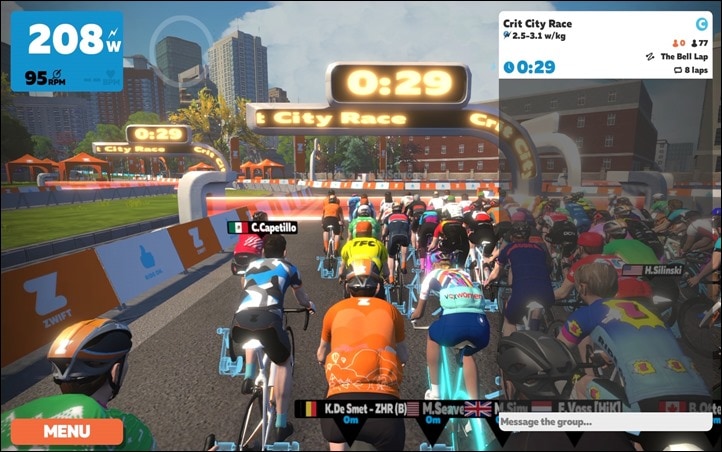 For those curious, I was rockin’ my older road bike on a Tacx NEO 1 (original baby!). Now that I’m done reviewing trainers for the year (ok, I’m actually not, but we can pretend I am) – this is the setup I have at home for weekend/night riding.

Technically I also have Vector 3 & Stages LR on the bike too, but this was a rare non-comparative ride. Watch-wise I had a Vivoactive 4 on, though I didn’t bother to start it. I used a Mio Pod optical arm strap, and then watched as it twice shut off mid-ride. Because…that’s a topic for another day. 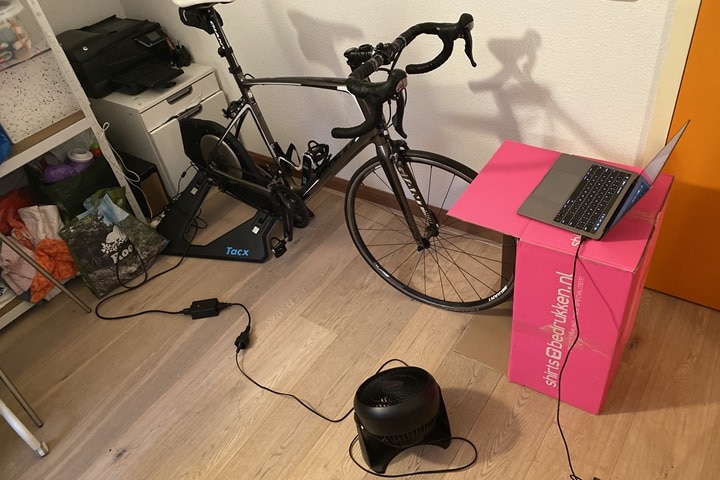 Oh, and there was also a prototype Maelstrom ANT+ fan controller in there too. Ok, now I’m done on the tech stuff.

So, 29 seconds later and the race started. I assumed it’d be just like any other Zwift Race, which is to say – balls to the wall for the first while. I also assumed ‘while’ meant the entire race. 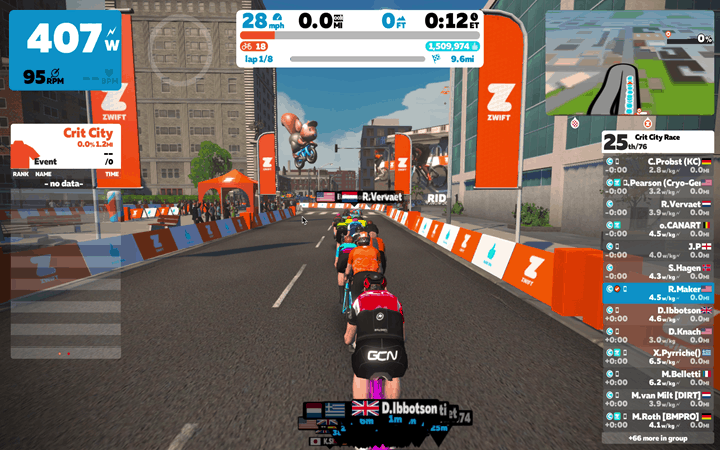 It started off the first while at 500w+, and then slowly crept down into 400’s before roughly settling in the 300’s range…for the remainder of the race. However, I actually managed to keep up quite nicely. I got into what appeared to be the lead group relatively quickly, and generally stayed within the Top 10. 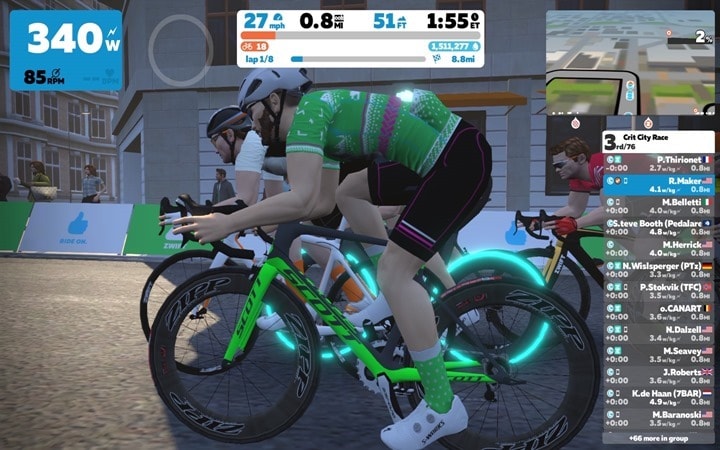 I was pretty sure the first 3-4 laps that Top 10 was entirely within that lead group, but at some point along the way a rider or two snuck out somehow. Shrug, I wouldn’t be able to sprint my way for the win even with an older CycleOps Hammer trainer (yes, I know, a firmware update fixed that benefit a few months ago). I was mainly aiming for Top 10.

The course is, as the name implies, in a city. Mostly a modern city, but there are some old-world touches. Also note there’s even a giant screen that’s theoretically broadcasting the race. In practice, it’s actually just a still image (to the right of the turn): 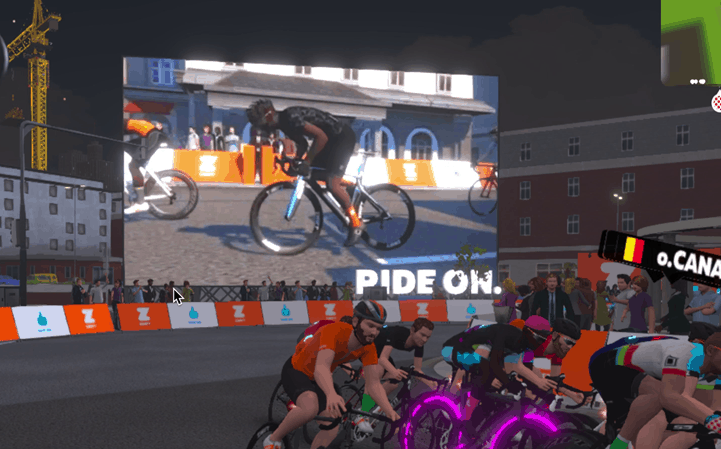 The laps frankly blurred by. You’d feel the little speed bump (hill) each lap briefly, which spikes to 8% from what I saw on the screen. But wait, here’s a fun video of what a single lap of that blur looks like:

Here’s that cobblestone section I talked about as well, which is cool on the NEO Series trainers cause you do feel it as part of the road feel bits: 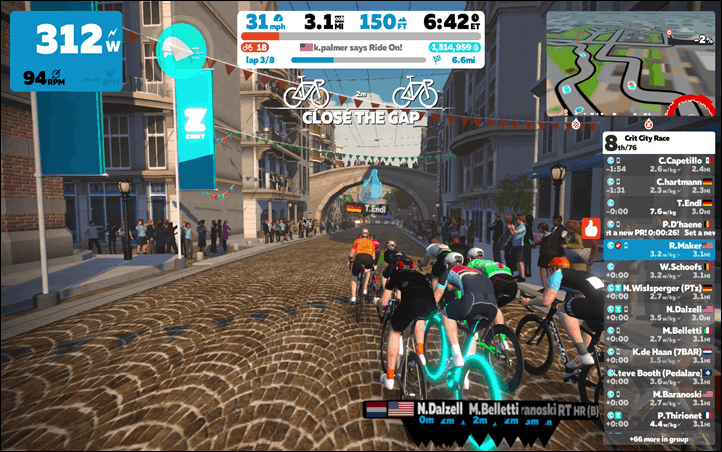 Around the 6 lap marker, my Mac started giving me a hard time. Apparently, I forgot to plug it in earlier in the day, and I started the event at 30% power. Also apparently, my MacBook Pro laptop burns battery like a blowtorch during a race. Just like me. So around the 6 lap marker when it was down to 10% power, graphics went out the window. You know how people talk FPS – frames per second? Nope, I was seconds per frame. About an update every 3 seconds. It was craptastically awesome.

(And, because some of you will say – but wait, the laptop was plugged in, in the photo earlier! Sure, it was…with a 45w non-Apple charger I grabbed last second that did approximately nothing to provide power.)

You simply can’t keep up with the race dynamics with that, and the group I was part of broke away. Heck, even my screen started virtually falling apart. This screenshot shows what I saw numerous times. Albeit this was taken just after crossing the line. But still, same-same. Again, I think this is really more my computer’s fault than Zwift’s. But it does give yet another reason why consumers just want an all-in-one ‘always works’ solution like Peloton. Display and everything built in. 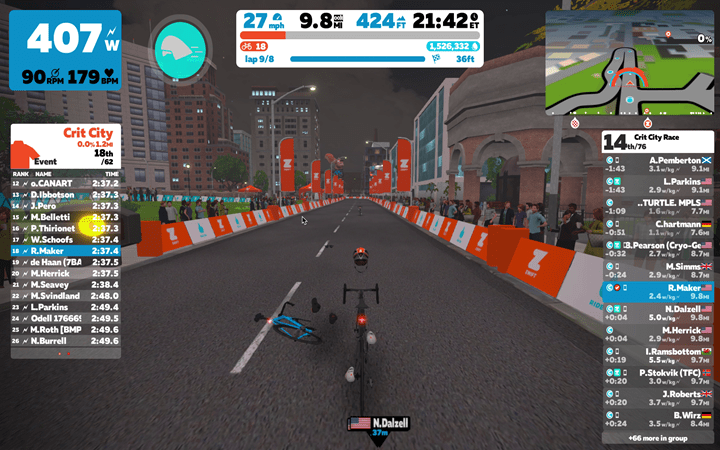 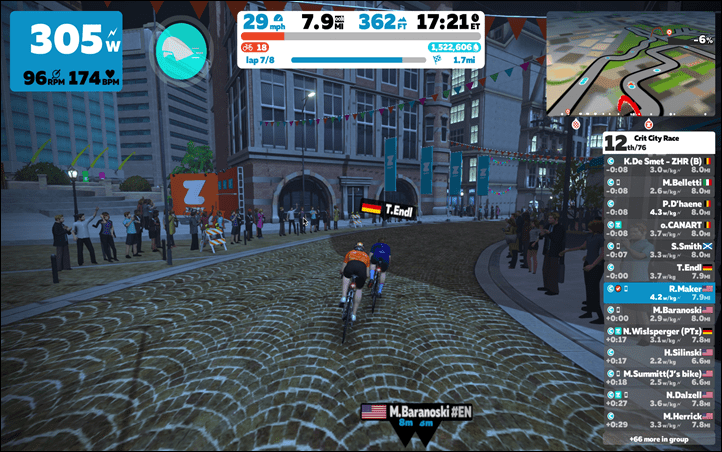 With that pack travelling some 30MPH (~50KPH), there’s no way to hold that speed once you fall off (above is a descent at –6%, hence the speed). Still, I pedaled those last two laps in, and only managed to fall to 13th place. I’ll take it! 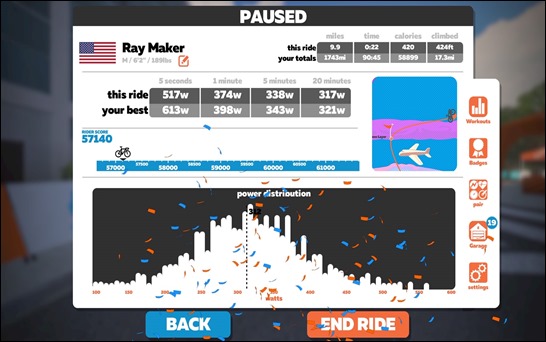 In unrelated news, my heart rate is still higher than normal – some 7 hours later. That pretty much hurt like an FTP test did. Which, I guess it kinda was. 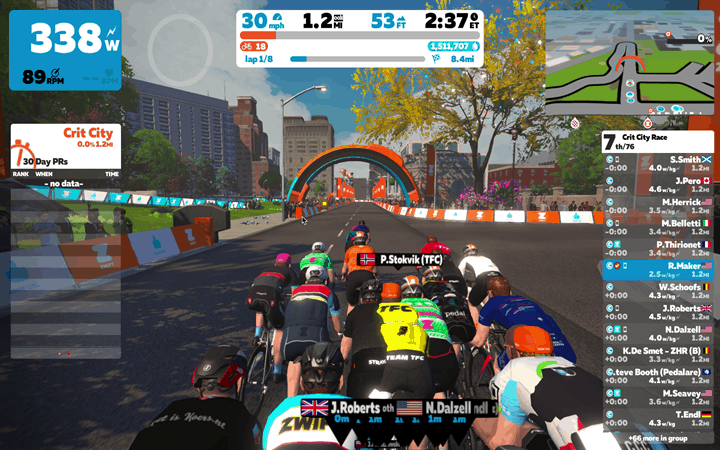 Like I said earlier on, I’m reasonably impressed. I mean, it’s not like Zwift did anything terribly magical here. They just made a 1.9KM loop course and then allowed people to run events on it. Technically speaking they could have done that anywhere in their existing courses and achieved the same technical thing.

None of the corners are slowed down in the course based on what I could see. Which takes away some of the realism of a real-life crit. There’s no technical aspect to crits today, but it does sound like it’s coming. Back on the Eric Minn Thanksgiving Day Ride (he’s the CEO), he talked about the crit course a little bit in the chat. One of the things he noted was that some element of steering is in the cards for on-road routes (versus the steering beta they did this past fall).

That will, of course, require riders have some aspect of additional hardware. Whether it be a phone mount for their handlebars as the beta was, or a steering device from Elite or JetBlack (or one of the smart bikes that has steering potential). That would add to the realism. And then, in a galaxy far far away, as CVRCade would say – so would crashes. That’s obviously a controversial topic on Zwift, but there is a reality to that. Just like mountain biking, one key aspect that separates virtual riding of crits to real-world riding is the crash-avoidance piece. How they could down the road implement that in a way that isn’t frustrating is the question (and a really tough question). Personally I like it without crashes, but, I’m also open to some magical implementation beyond anything I’ve seen to date.

Still, much to my surprise I think I’d actually be game for doing more of these. I’d probably prefer the shorter ones over longer times. Perhaps up to 30 minutes or so for my enjoyment factor. I don’t think you’d see me doing an hour one anytime soon, but hey, maybe I’ll change my mind…again. We’ll see.

With that – go forth and have a good weekend!

(P.S. – In case you didn’t know, or don’t have a new smart trainer, there’s a new sale that started this weekend with 20% off KICKR/KICKR CORE/Saris H3, and a few others including the rarely discounted Favero Assioma power meter pedals. Full details of that and more items than your wallet wants here.)