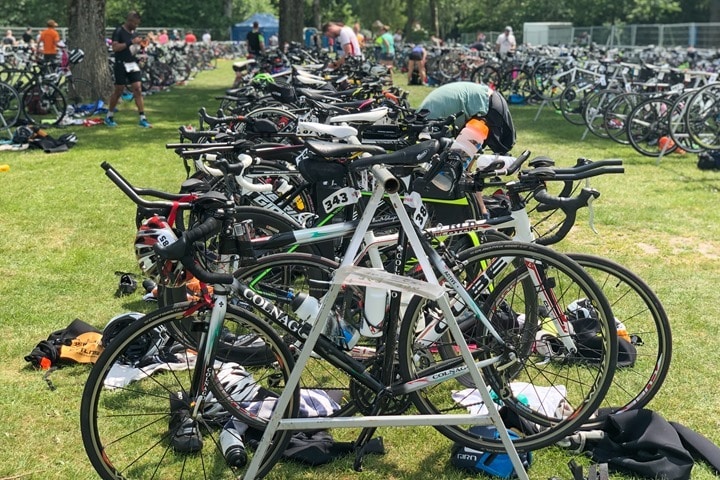 You know what’s fun? Signing up for local triathlons a few days beforehand with pretty much no plan or appropriate sport-specific training. It almost always guarantees a good time. Sure, I had run and ridden, and even swum…once…in the weeks prior. But none of it was super intense or structured. It was just enjoying getting out and running or riding.

But with the ease of signing up for a race on a Tuesday prior to a Sunday event, and the prices being super inexpensive, I figured why not? And thus I found myself Sunday afternoon on the hottest day of the year ready to enjoy an hour or so of suffering.

The race is part of a larger triathlon series, and in the case of this specific day there were multiple races over the course of about 6 hours – roughly once per hour. Some sprint distance, some Olympic distance, and so on. By the time I had gotten around to signing up, only the 2:15PM time slot was available. Not exactly ideal racing time on an 87°F/31°C day, but hey, it could have been worse: There was the 3:15PM wave.

Packet pickup took about 45 seconds at most, with super friendly folks explaining the bits I needed to know: 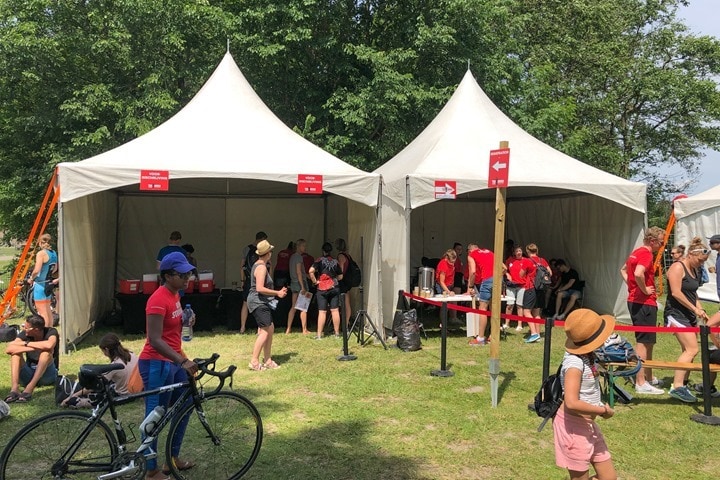 And of course, I picked up my race bag with all my various race numbers and stickers in it: 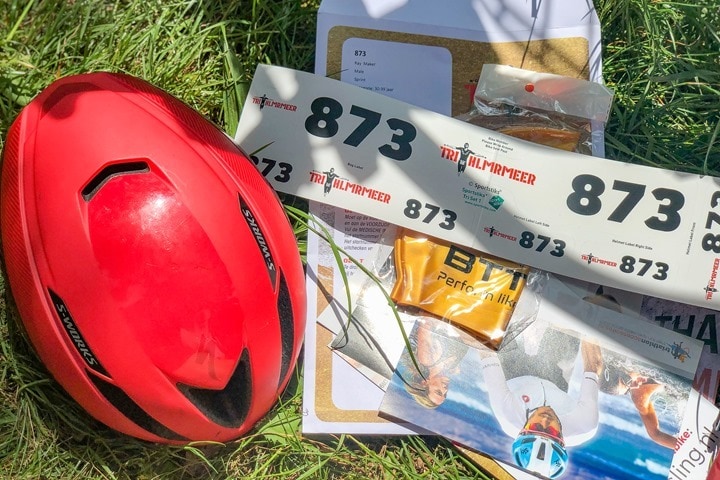 There were a handful of vendors as part of a mini-expo, including both Wattbike and TrueKinetix, plus a typical triathlon gear type stand as well. And then plenty of beach area for family and friends to hang out and enjoy: 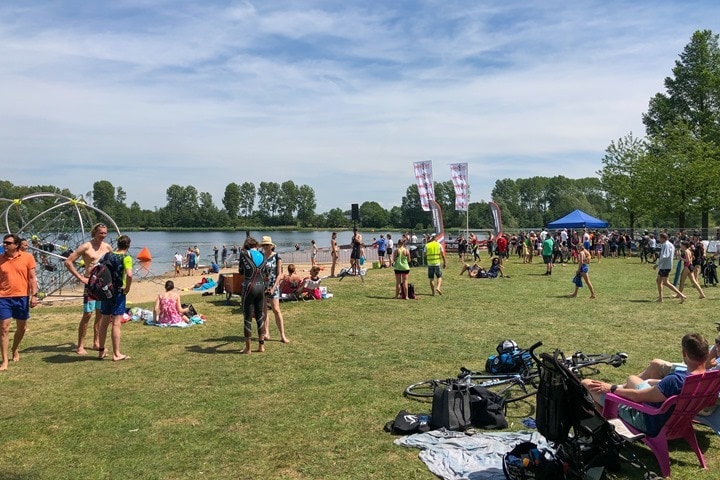 After that it was over to transition to setup my bike and run goods. Since the race was ongoing, the race officials were sorta letting people go in groups as waves would pass through. They had structured transition smartly though, such that the different waves were roughly grouped together so that there wasn’t too much traffic in your specific area. 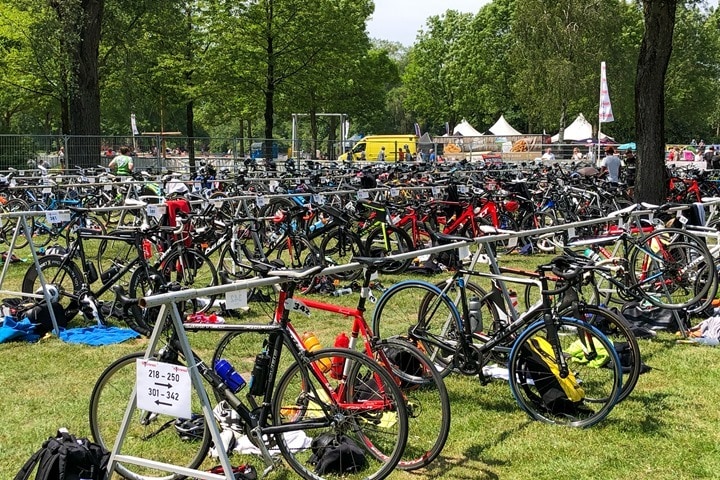 For this race I was using my Cervelo P3C triathlon bike, since drafting was not legal (whereas many races I did in France, drafting was legal – so you’d use a road bike for those). 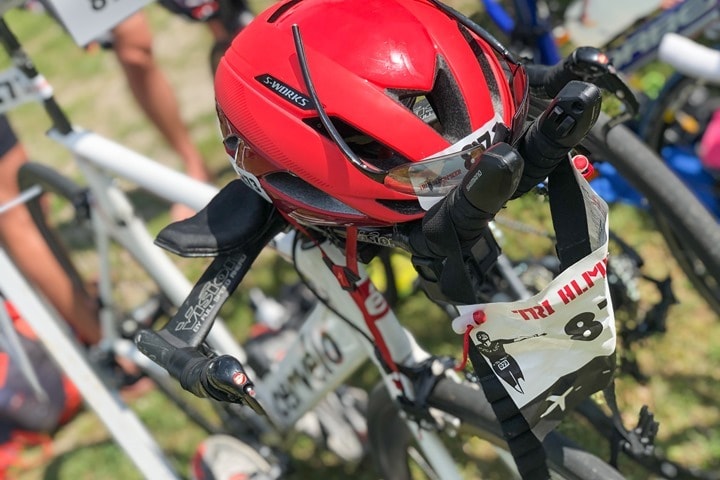 I clipped in my cycling shoes onto my bike, and then got my running shoes all setup off to the side as well. Helmet atop the aerobars, as well as sunglasses and tri belt that held my race number.  I grabbed my wetsuit, swim goggles, and swim cap and headed out to kill a bit of time before my wave.

The route was a simple 750 meter triangle, nothing fancy, nor terribly long. This is a good time to mention I was doing the sprint triathlon. Sure, I could have done the Olympic triathlon – but why work longer than I needed to? Here’s the swim wave before me, heading towards the first orange buoy across the lake: 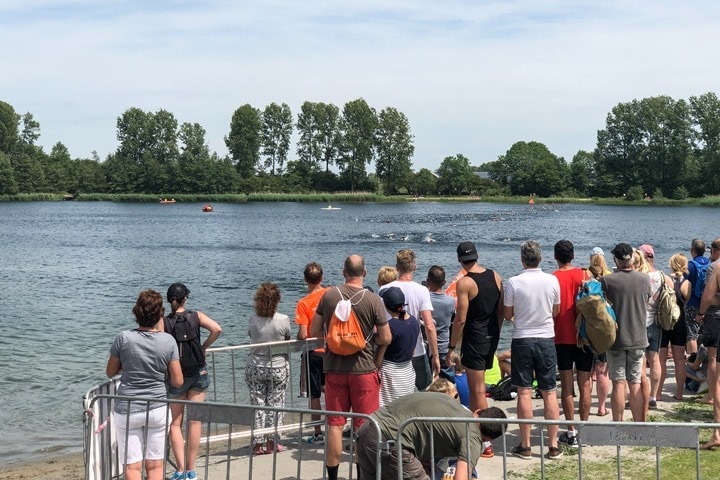 We lined up a few minutes prior to the swim and then the starting gun went off precisely at 2:15:00. Dutch efficiency at its finest here. 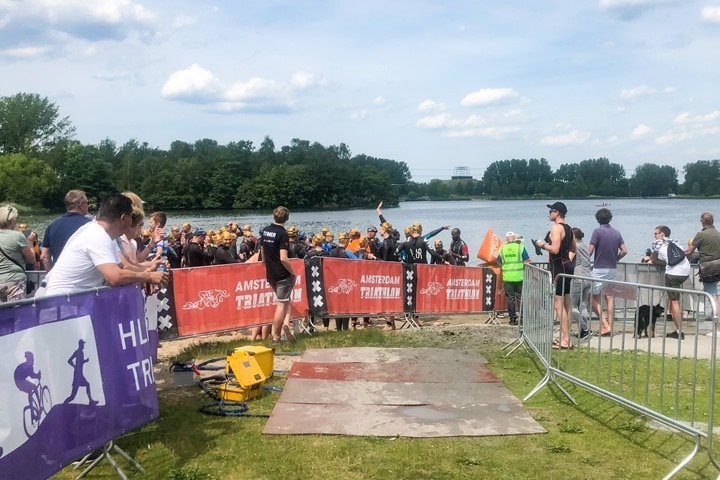 At this point, I swam. Not terribly fast, but comfortably cruising. Speaking of which, I was wearing the Garmin MARQ Athlete on my left wrist, and then the COROS VERTIX on my right wrist. With the goal here of being able to put legit triathlons on both watches prior to very near term reviews. Always something about a race that’s fun to validate a watch. 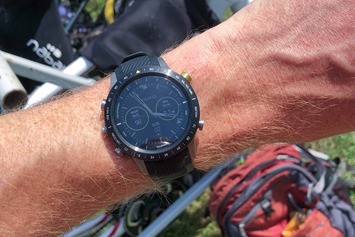 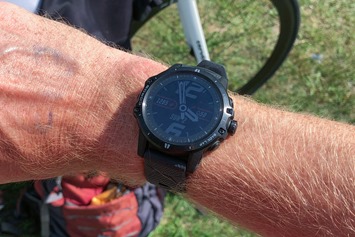 I don’t have a ton more to say about the swim. I just kept on swimming till there wasn’t anymore distance to swim. Outside of the first 50-100m, it was pretty calm with virtually no contact between athletes. The only downside was that the Garmin MARQ stopped recording distance after about 34y as I noted in my previous post. The COROX VERTIX did continue, though seemingly overshot by about 150y (but the track was roughly where I swam).

I came out of the water in 14:01, which given I’ve swam exactly twice in the preceding two months…I’ll take it! 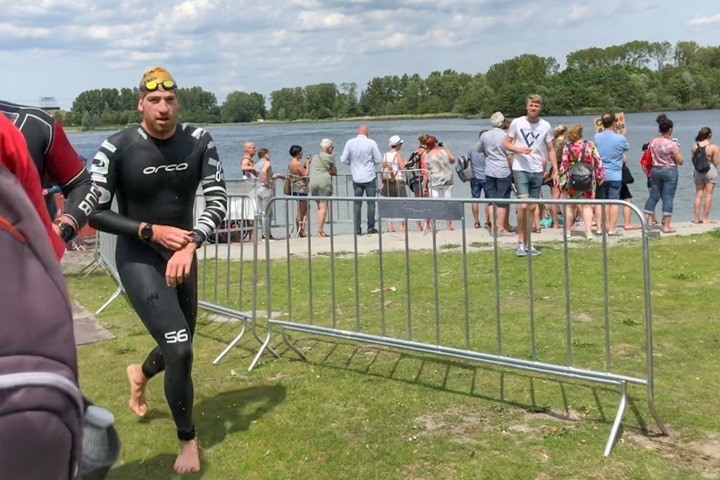 Transition was efficient, though I did struggle a little bit getting my new wetsuit unzipped initially. Should have practiced that given it was nearly brand new. Once that was settled it was a short run thankfully almost entirely on grass before I started pedaling. Good grass in fact.

The bike started out on a fence lined bike path as it sped away from the larger park that the swim/run were based on.  Within a few hundred meters I had my cycling shoes on and was spending a few minutes getting my HR back down from swim and transition. I played pass and be passed with one or two other cyclists as we all found our respective pedaling sweet spots. The bike course didn’t have a ton of cycling traffic on it, and was almost entirely sans-vehicle traffic.

The most exciting part of the bike course was what this race is known for: The Polderbaan.

The Polderbaan is a bike path that parallels one of the major runways at Amsterdam’s Schiphol airport. If the winds are in the right direction you effectively race the planes as they take-off. What makes this bike path unique though is there are no fences between you and the planes. Instead, there’s a few meter wide water-filled canal that’s not visible in photographs. Still, it appears like there’s planes taking off or landing right next to you: 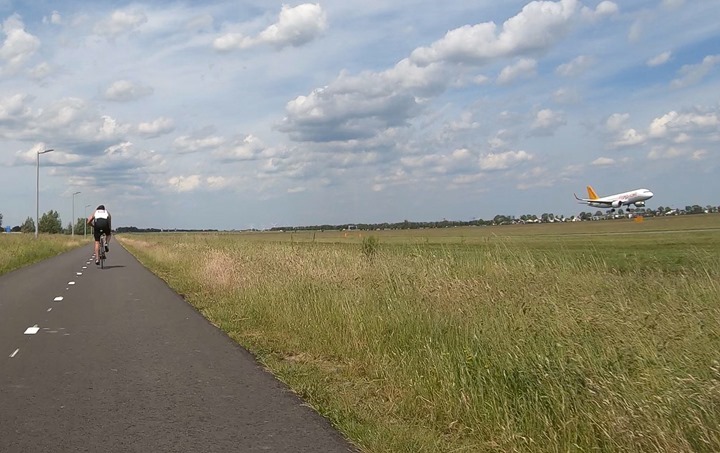 The organizers have also setup a 1KM timed section of this stretch that you can compete on. Fastest time of the day wins an award. Sorta like a private Strava Segment. 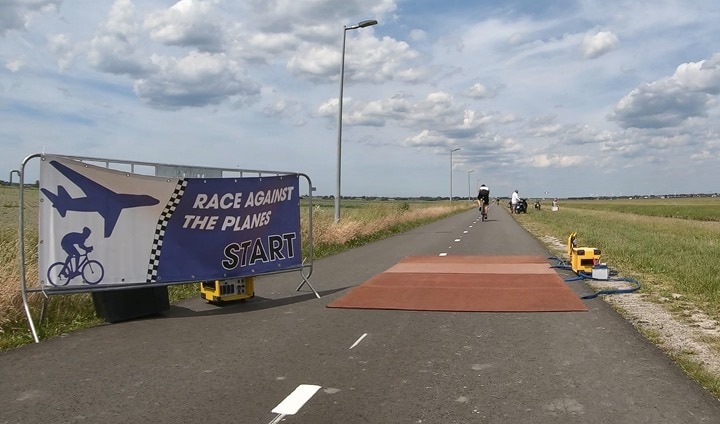 Now what made this day interesting was the tailwind. It was super strong, thus the planes were landing towards you, rather than taking off with you. So while photographically that’s not quite as much fun, it makes for a great ride. I was cruising along at ~30MPH/50KPH easy pedaling.

Seriously.  I was sitting up (to catch the wind) and doing roughly 180-200w easy pedaling along passing guys in aero position. Remember kids: If the wind is strong, embrace your inner sailboat while you can.

Of course, all good things eventually come to an end. And soon enough we were back into that same strong headwind. So it was back into aero for those sections.

Some 33 minutes later I was taking off my cycling shoes as I approached the transition zone. I was a bit slow on the bike overall, mostly as I didn’t think to adjust my position any. Which sounds silly, but I had forgot the last time I was on my triathlon bike was last fall when I was doing some aero sensor testing. As part of that we had kept on tweaking my position more and more aggressively, just for fun, to show the aero effects. Of course, I forgot that those last few positions were unsustainable for me, especially when I didn’t train in them (I mostly ride my road bike). Still, for 30 minutes how bad could it be I told myself.

So, some tweaks are in order before the next race.

I quickly tossed my bike into transition and was briskly out on the run. I grabbed my GoPro from my bike before doing so. In case you’re wondering, I did confirm with not one, but two different race officials that having an action camera was fine. Both were totally good with it. Here I am leaving transition, via a photo from The Girl: 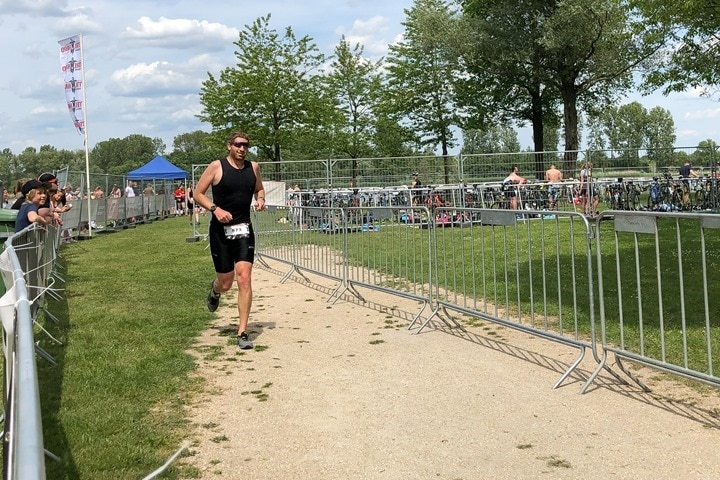 The run was roughly an out and back through the park. It wasn’t a perfect out and back in that there were some sections you did on the way out but not the way back. But you get the idea. A fair bit of it was out in the sun. As noted, it was by far the hottest day since last summer. And the weather had only warmed up the day prior. So we went from jacket weather to bikini weather in a 48 hour span. I think myself and everyone else knew our run times without acclimation would mostly be crap. I just accepted that reality, especially with a 2:15PM start time.

Still, nobody passed me, which is pretty much my yardstick for a ‘good’ run. I passed the handful of people that were passable during my time. Plus I grabbed water from the water stations every kilometer or so. 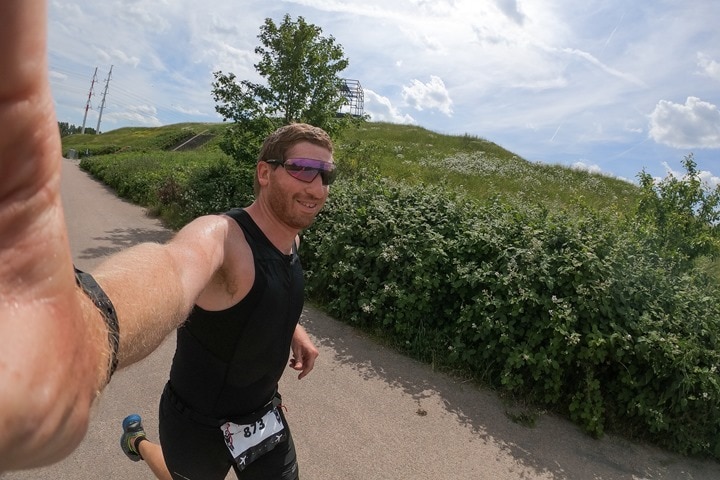 It really was a nice run course though. Some courses go by fast, and this was one of them.  The time flew by, and before I knew it I was turning the corner back into the finishing chute: 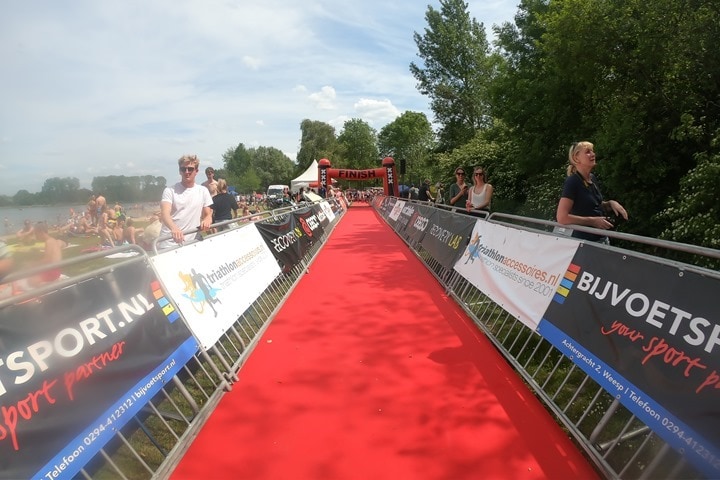 My run time was 23:15, which will undoubtedly make some of you giggle. I’m not a hot weather runner, especially when I haven’t been putting in the interval miles to sustain any 5K race paces post-swim/bike.

Still, my overall time netted me a place of #23 out of 253 finishers. So it’ll do donkey, it’ll do. Plus, best of all was having the family there. Both Peanuts and The Girl came out to enjoy the day: 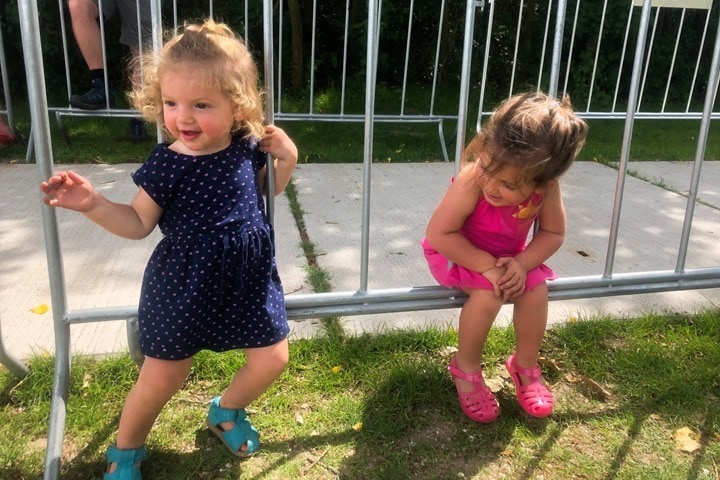 It’s fun having little ones cheering for you, especially now that they’re old enough. 🙂 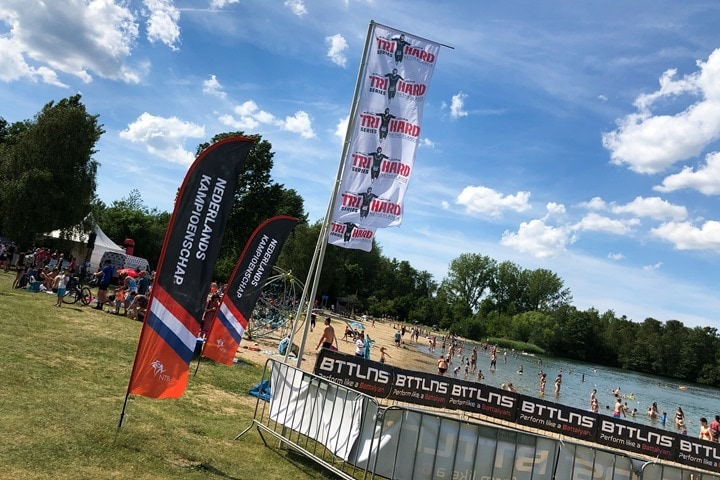 With the race over we packed everything up and headed on home. Both The Girl and I are looking forward to sneaking in a few more races this summer as part of the larger series. They’ve got events roughly every 1-2 weeks throughout the summer, most of which aren’t very far from Amsterdam (or are in Amsterdam). Plus the company had up results within a few hours (maybe sooner, had I found them), and photographs were up by various race photographers within a day or so as well. Props to both.

Plus of course, I appreciate a race that packet pickup is a sub-1 minute affair, and that I can register at the last minute. I know that both of those things are more difficult for organizers to deal with, but they make it viable for athletes like myself that can’t long-term plan their life.

With that – thanks for reading! Oh, and you can find all my past race reports here, in case you want to skip down memory lane.