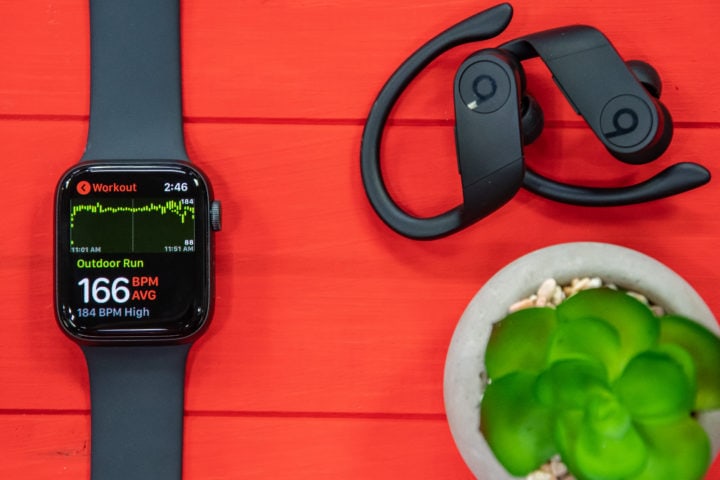 [Heads up: My full Apple Watch Series 5 In-Depth Review is up and published! Hit that up over here for all the complete and final details]

This post is just a super quick note that I pushed out a video with my initial impressions on the Apple Watch Series 5. I know that there’s surprisingly little overlap between my readership here on the site and that over on YouTube (despite my apparent verification there, removal, and then undoing of said removal…shrug?). So this post mostly serves as a heads up that if you’re looking for some initial first run data, I’ve got it for ya.

But, I’ve got 14 minutes and 16 seconds until dessert comes out of the oven (brownies, yes, in Amsterdam), and I’ll try and recap whatever I can till the ding happens. Given the serious time constraints we’ll go bullet style (all of this is detailed more deeply in the video):

– Yes, I definitely plan on an in-depth review here on the site, maybe later next week, or early the week after. I talked about the new features, many of which come via WatchOS 6 in my first Series 5 post here. Thus, I don’t plan anything further on the site till my full review. This post is mostly for YouTube since I didn’t do anything previously there.

– The always on display is nice, and works in a fairly similar way to Garmin and Fitbit in this space. The watch face is dimmed when your wrist isn’t raised or actively interacting with it. When you raise your wrist it immediately goes full bright.

– I had no issues seeing it in full sunlight mid-day (summer, technically) yesterday – in either dim or bright mode.

– GPS track accuracy seems roughly the same as my Series 4 unit as of August 2019. Apple has done some stuff there on corner cutting fixes and smoothing, but it still leaves the tell-tale Apple like swooshes around corners and overly smooths the track. Sometimes that works out, sometimes less so.

– I didn’t include the Polar Vantage V GPS track in my video because it was hideously bad. I have no idea what went wrong there, I’ve never seen anything like that before. You can view it in my set if you want though.

– HR accuracy seems less good than Series 4, which is a disappointment. There were some unexpected spikes and dropouts that are very un-Apple like. They did great work in Series 4 on optical HR – making it the best in the industry (a huge leap over Series 3). This is definitely going backwards, and I don’t think I’m alone here (more on that in the next bullet). However, these are unlike anything I see across the industry for mis-tracking. This looks like a bizarre algorithm or power type fail.

– DesFit is seeing the same thing as well on his HR tracks, thousands of miles away in Colorado. And he even compared concurrently against a Series 4 on WatchOS 6 as well and no issues on that unit. His swooshes are also more impressive, where while riding the Apple Watch is completely ignoring certain turns as seen below:

– 8:43 seconds till brownies come out

– Disappointingly, 3rd party apps aren’t able to take advantage of the always-on screen. Thus, apps like Strava don’t actually show you the app while you’re using it. Instead, it shows a slimmed down version of the time. I demonstrate this in the video. This is a huge disappointment for 3rd party apps that were looking forward to an equalizer for more advanced use cases (or just simple ones like doing pushups in a gym).

– Battery life is a step back from Series 4, assuming you leave the defaults on. I put it on at 7:30AM this morning, and it’s now 9PM, and I’m at 25% battery with no GPS activity today, I suspect I’d run out of power shortly after midnight. On Series 3/4, I was getting a solid 2 days, even into the 3rd day.

– Beyond that, it’s basically just an Apple Watch that you know from the Series 4. Most other things are all exactly the same as they were on Series 4.

– The Girl also got one, though she’s mixed on whether she’ll keep it. It was interesting seeing her perspectives as a first time Apple Watch user coming from her Garmin Fenix 5S (non-Plus). She’s rockin’ both right now, but seems to defer to the Fenix 5 for most things. But it’s only Day 1 for her.

Ok, with that – the brownies are buzzing. I’ve gotta go!

Enjoy the video and stay tuned for more. I’ll include any weekend data sets I do within my normal ‘5 Random Things’ post on Monday, as usual.

Thanks for reading..err…watching, and have a good remainder of the weekend! Brownies out!