May 24, 2019 by DC Rainmaker|Sports Technology News and Reviews|Comments (31) 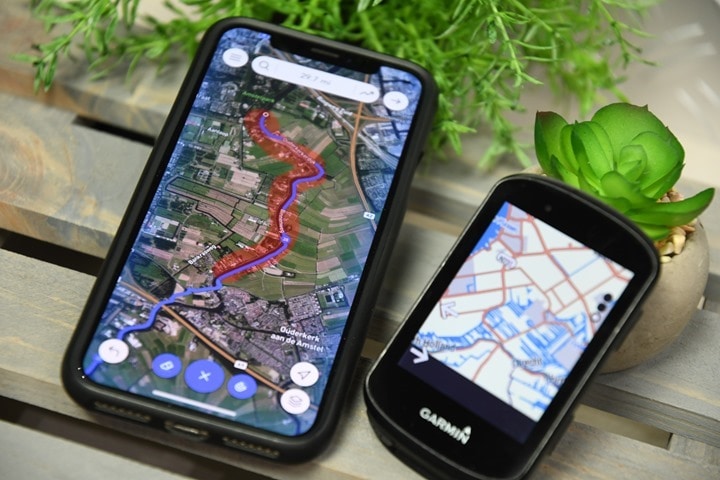 Today we’ll continue the once in a long time series of quick app reviews. As you know, I generally dislike doing app reviews, mainly because apps change so quickly that any criticisms I make are immediately addressed in the next revision. Then for some reason app companies usually demand I immediately update my reviews/posts to account for their mistakes/fixes. Thus, I solve this problem by just not doing app reviews. I’m a practical kinda guy.

But as seems to be the case – every 6-8 months I get curious enough down a rabbit hole and decide to publish one. A quick one, like always. Well, quick is all relative.

In any case – Footpath is basically the ‘inspiration’ behind Strava’s finger route planner that was introduced a few months ago. The company later showed that ‘inspiration’ basically means Strava copied it and did a poor job of covering their tracks (no pun intended, but seriously, read that article). In talking with the Footpath’s creator, they noted how much better their solution was than the rendition presented by Strava. And the truth is – yes and no. Yes, they’re a far deeper solution, but you’ve gotta pay for that depth. The free version is very basic and not super useful for most fully connected athletes, as it doesn’t allow exporting. And for accuracy of finger-dragging? Well, that too depends a bit.

Oh – and you may be wondering why you’d want an app like this. And the answer is simple: Both Garmin and Wahoo’s route planning options suck. In the case of Garmin, it’s newly rolled out smartphone route creation app functionality is incredibly clunky. I dare you to try and create a 50KM route with it. And Wahoo? They don’t have one at all. You can only do point A to point B routes, nothing with any stops/loops/etc… Thus, time to find alternatives.

In any case, let’s dig in. Obviously, first you need to install the app. It’s unfortunately only available on iOS. Sad panda. Though – happy panda in that the developer says you’ll see it come to Android a bit later this summer. Woot!

Still, for those iOS users, I presume you know how to install apps on your phone. If not…umm…welcome to May 2019. We also have airplanes and robotic vacuum cleaners. Folding phones though are still Jetsons black magic.

Once installed it walks through a super quick tutorial on the basics of the app. It’s easy-peasy. When it comes to creating a route, the key thing that Footpath allows is the ability to just swipe your finger in a single movement for where you want to go. Like circling a lake or park, and then it’ll do the work of figuring out the exact path (so you don’t have to trace the specific road).

Again – the point of this app and these concepts is that you don’t have to be precise. It’s supposed to figure out the best running/riding route based on all the data it has in it. It’s supposed to be your local guide.

Ultimately, what I found was that Footpath wasn’t super good at following directions when giving it too much information. Like trying to tell my dog too many tasks, it gets lost after the first one.

The good news is that you needn’t get super crazy and try and complete your artwork with just one finger swipe. I tried variants of going around the famed Vondelpark (both by itself and as an addendum) numerous times, and only a fraction of those times would it actually follow the crazy-popular perimeter path.  That’s because unlike Strava’s attempt at this concept, Footpath allows you to both edit your swipes, and build them together.

So instead I set out to create my ride for the day. This time to a place I’d never been to. I roughly knew a few of portions of the route, but not the whole thing. It’d be a 50KM route (something that’s essentially impossible on Strava’s finger dragging platform).  I started off, and just swiped roughly across the roads I wanted. Each successive swipe simply added more length to my route.

This actually worked fairly well, though I did find cases where it would just do weird things to the path. Like, random distractions into a neighborhood/trail for a moment or something (see upper left screenshot for example of that). The good news is that it’s easy to fix those. You can break out the eraser tool and just highlight what you don’t like/want:

Then simply re-draw it and you’re all set. Also of note is that the platform supports a mind-bogglingly impressive number of map overlays. With the free version you can do the straightforward map (in light and dark), as well as an outdoors topo-driven option. Plus the satellite view. Then there’s all sorts of options for Elite subscribers that you can see below.

Once you’ve got your route you can save it. You can save up to 5 routes in the free version (but you can delete ones you don’t want). And you can give it a name and have it in your digital locker – none of which requires creating an account or subscription.

Let’s be super clear upfront: In order to get the route anywhere, you’ll need to pay up.

Unlike the free Easy Route, Footpath requires either their ‘Elite’ subscription membership or a one-time payment for a single route. The costs are seen below – $4/month or $23.49/year. However, there’s also the not so obvious $1.99 option listed in the text down below. That’s what I selected – just one route only. This meant that I got all the ‘Elite’ features for just a single route in my collection.

So armed with my two buck chuck of sorts I had my route and was ready to do some exporting. You can see it unlocked the new features on this route when I tapped ‘More’, and then I had a theoretical 6 options after I hit ‘Export as…”:

From there I selected to open it up with Garmin Connect mobile. The same concept works for Wahoo ELEMNT/BOLT/ROAM users – though only with the non-functional .FIT/.TCX options. That’ll immediately open the ‘course setup’ wizard on Garmin Connect Mobile, which shows you the course you imported and has you select the course type.

At that point you can review the course and give it a name, as well as tweak a few other minor things. Most importantly, you can then send/transfer it to your device (any Garmin device that supports courses – even really old stinky devices).

In my case I transferred it to the Edge 530. I had titled it ‘Footpath Test Ride’, as seen below. Then off I went, following the route just as normal like any other routes. 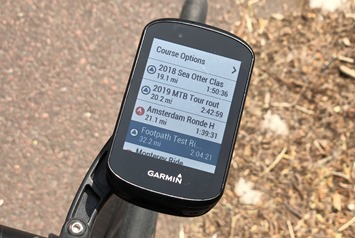 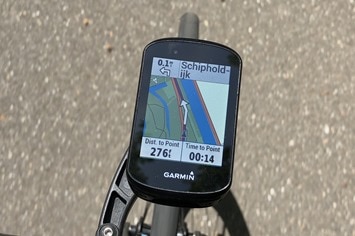 It worked perfectly fine – I saw no issues during my test ride. Well, except these sheep. And that it was sorta off-road:

Oh sheep! I didn’t exactly expect miles of baby and mama sheep dodging on my road ride today. Then again, I also didn’t expect trails either. Maybe next time I’ll listen to the mapping app when it repetitively tries to route me a different way.

But I can’t exactly blame Footpath for that. To its credit – it tried numerous times when I was creating this portion of the route to put me on a different path/road, but I keep overriding it. Obviously, I knew better. Or not, as it seems. On the bright side, miles of sheep dodging along a river on a beautiful sunny day was actually kinda enjoyable.

There’s no question that what Footpath is doing is far beyond Strava’s first knock-off attempt of it. And, for the most part, Footpath works well when used in moderation. Don’t try and tell it too many things with your finger, and it’ll get your route done for you pretty easily. From there, most 3rd party GPS bike computer & wearable apps support opening these file types and transferring them to the device of your choice.

I think my challenge is really just the pricing model. To me – $24/year just seems a bit too much for what the app provides. I’d much rather pay a one time fee of $9.99 for the app (and would happily do so tomorrow), than a $24/year fee. I totally get those are two obviously different valuations, so I’m just saying what my threshold is. I’d say even up to $11.99 or so maybe. I don’t know – ask me tomorrow and I’ll give you a different answer on the exact price, but I’ll still tell you I’m growing tired of signing up for subscription services (and yes, I know I offer two different subscription services).

Still, I will say that the number of features they offer within their Elite bundle is impressive – especially things like the mapping options if you live in areas where you want those custom map types. And I also like the eraser bit a lot – that’s really well executed.

In any case – I suspect I’ll continue to use the free Easy Route as I have for years (though, I would pay a one-time fee there to unlock more map/routing options). Maybe I’m just a creature of habit, or perhaps because I’m just someone who likes simple things that just work day in and day out without having to create more accounts.