May 30, 2019 by DC Rainmaker|Sports Technology News and Reviews|Comments (7) 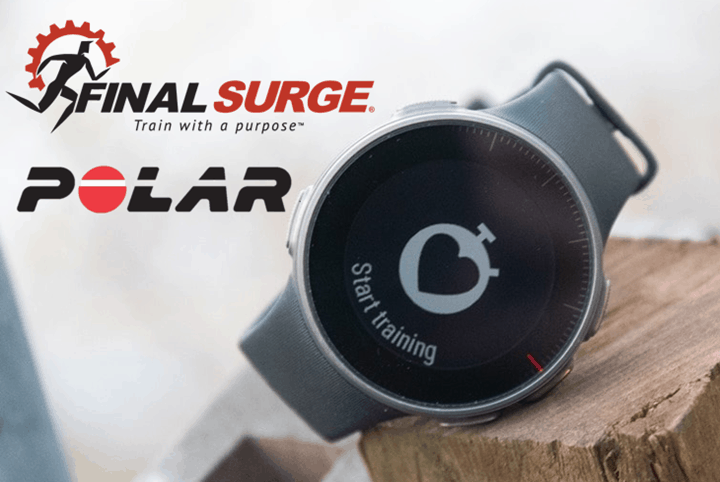 I like highlighting things that improve interoperability for end users, and help advance the industry forward. Said differently: I like highlighting cases where companies shift towards industry standard file formats that make our lives easier. Or at the very least, my life.

Today Final Surge became the first platform to start pulling .FIT files from Polar, all while leveraging Polar’s quietly available API for .FIT files. You’ll remember I first highlighted their new API a little under two years ago, about the point Polar slowly started to turn the ship towards being more open. Since then we’ve seen the company take a number of steps – even adding in ANT+ support few months back on their sensor products like the OH1/OH1 Plus and H10 straps.

In some ways the .FIT format might seem like a minor and silly step, but it’s also a big one for allowing them to start transferring more data to 3rd party platforms. Up until this point Polar primarily used .TCX files to transfer data, which while a good option for basic fitness data – gets more convoluted and easily bloated when you try and start adding things like developer extensions or complex data streams. While the .FIT file has been adopted by Garmin and most other sports tech companies for the better part of a decade, Polar was kinda the last holdout. Their new .FIT file API option changed that.

And in turn, Final Surge became the first to use it – a development process that started earlier this year and is now live.

Speaking of Final Surge, you may not know them – though they have gained popularity, even winning the 2019 Garmin Connect IQ Developer Awards for Best Training App. The simplest elevator explainer is that Final Surge is somewhat akin to Training Peaks or Today’s Plan – except free. Well, mostly. It’s free if you just want to use it for analytics. However, if you want one of their training plans (Running, Cycling, Triathlon), then it’ll cost you for that plan. Or if a coach wants to use it for their athletes. So their bottom line is funded by people buying training plans or coaches. However, if you’re just a regular athlete that wants detailed analytics – then it’s totally free.

Perhaps I’ll do a ‘Quick App Review’ on it someday. Though, if you’re a participating athlete already – I’d love to hear what you think (especially if you’ve got experience on other platforms). At any rate, we’re getting distracted.

Setup is silly easy. They walk through the steps here, or, you can just tap the ‘Workouts’ menu option, then choose ‘Garmin/Device Upload’, which takes you to this page: 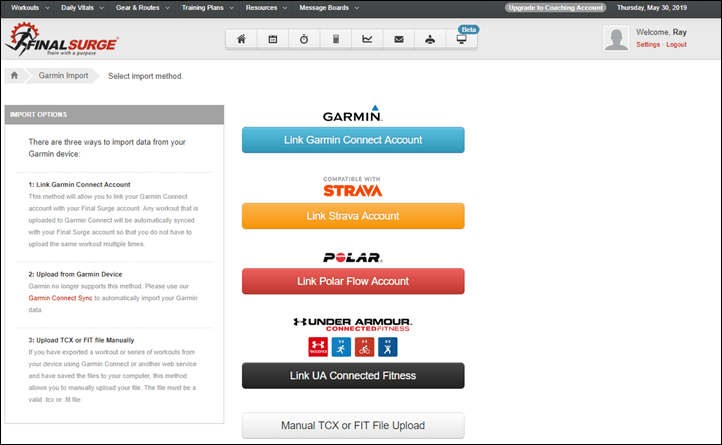 It’s here you’ll have the complex decision of choosing from 5 colors. Red = Polar. Or, you can read the logo. Your call.

Once you do that, it’ll bring you here. The key checkbox on that one to take note of is that it’ll automatically merge scheduled workouts from your Final Surge calendar with those coming from Polar. I can’t think of a reason you wouldn’t want this, but of course if you have a reason, the checkbox is there for you. Otherwise whack that green button.

Like 18 million other websites out there, you’ll then be brought to the authorization/authentication page – in this case on Polar’s site to accept/approve the app. Blue is the color of choice here for success. Along with that agreeing to the terms checkbox. 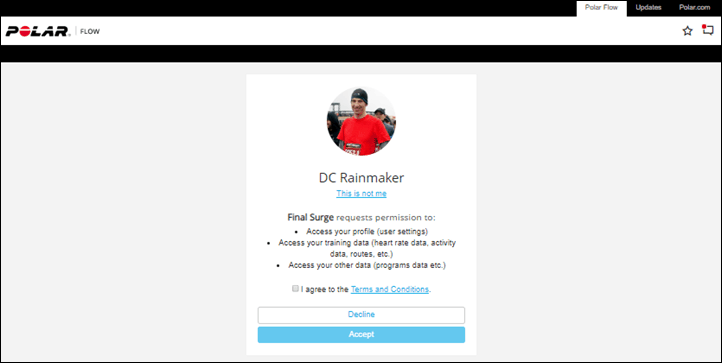 And with that, you’re done, it’s setup.

Now unlike some platforms, there doesn’t appear to be any backfill here of older workouts. For example my runs and rides this past week with the Polar Vantage V weren’t copied over. In talking with Final Surge, that sounds like the way the Polar API works at present. Since it’s 9PM and I’m home alone with the kiddos already sleeping, going out and doing another longer test workout isn’t possible. However, I did use the Polar Beat app tied to a HR strap and was able to confirm that the files went from Polar Flow to Final Surge and showed up there.  It wasn’t as instant as the connection to Strava (which occurred within 3-5 seconds of hitting ‘Done’ on the app), but it showed up within a couple of minutes in both cases.

However, because me recording HR+GPS for 28 seconds is kinda boring to look at, here’s a quick look at what a Polar workout from earlier this week (Vantage V) looks like manually uploaded to their platform (for those not familiar with it). Obviously this doesn’t show you the .FIT file, but it does show you what Final Surge looks like – so there’s that. 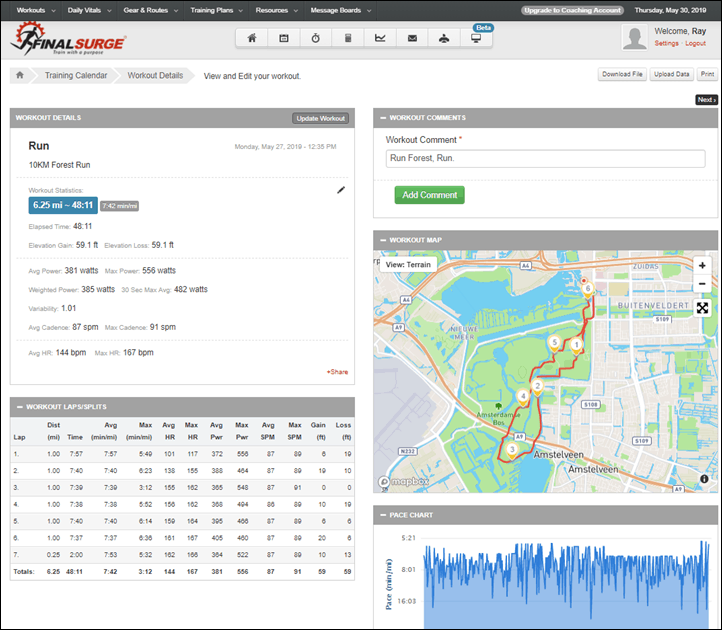 They also have a more advanced view as well, and you can toggle the core charts you’d expect along the bottom for things like pace/power/HR/elevation/etc… 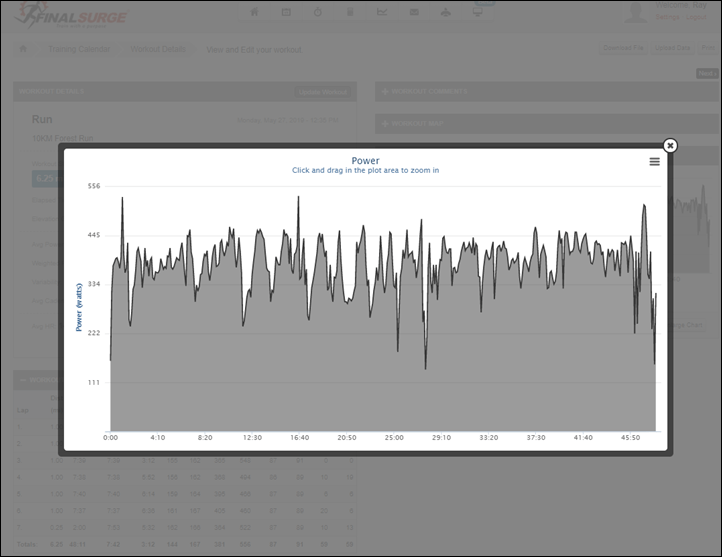 But that’s all stuff we can chat about on another rainy day. From a .FIT file standpoint, I have reasonably strong confidence that the .FIT files are properly parsed here, both in looking at some of the files generated for my test data, but also because I know the specific Final Surge developers that did a ton of work behind the scenes with Polar here to make this ‘clean’. I’ll upload my tomorrow workout once I have it synced over, for those curious.

Note that while this pulls your completed workouts from Polar to Final Surge, this doesn’t push structured/scheduled trainings from Final Surge to Polar. In looking through Polar’s API documentation, I don’t seen an option for that at this time.

Also, another random FYI – this integration isn’t listed on Polar’s site, either their main page or their secondary page (I suppose one could argue the first is the secondary and the second the main…but, either way, it’s not there yet). So you’ll have to follow the instructions to access it from the Final Surge site rather than the Polar site. 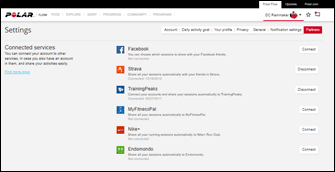 Just in case you were looking for it, now you know.

While there hasn’t been a ton of media attention on Final Surge, they have been quietly growing and adding new partnerships. But more importantly: New customers and coaches. Aside from today’s Polar implementation the company is also in the final beta stages of their workout builder they’ll be releasing later this summer.

Of course, the training platform field is more crowded than ever before. In some ways it’s becoming harder and harder to stand out among the crowd. And while free is a good motivator, the reality is that other platforms also have free tiers too (including the giant, TrainingPeaks). And to be fair, it’s honestly hard to figure out the nuances of those platforms. Big ticket items are mostly the same, it’s the gotchyas that are harder to spot.

Even just doing a quick Google search revealed virtually no current/up to date meaningful reviews or comparisons of the different core platforms. Which I know, you’ll tell me that perhaps I should do a mega comparison review of them all. Though, long-time readers will know how much I hate doing mega comparison reviews, let alone mega reviews of apps. That’s like asking me to eat an uncooked broccoli-parsley-artichoke smoothie. Then again, I suppose it’ll be healthy – so maybe it’ll be good for me.

So if you’ve recently switched platforms I’d love to hear your pros and cons. Keeping in mind that part of the reason I hate doing app reviews is the content becomes so quickly out of date. The reviews of Final Surge I looked at even from late 2018 (a mere 6 months ago) were already wrong/out of date on certain features. Times be moving quick!

Oh, and congrats to Polar on getting their .FIT functionality out the door. Looks like the only thing left on the ‘complete industry interoperability’ checklist is adding ANT+ to their Vantage series units. I mean, just sayin’…