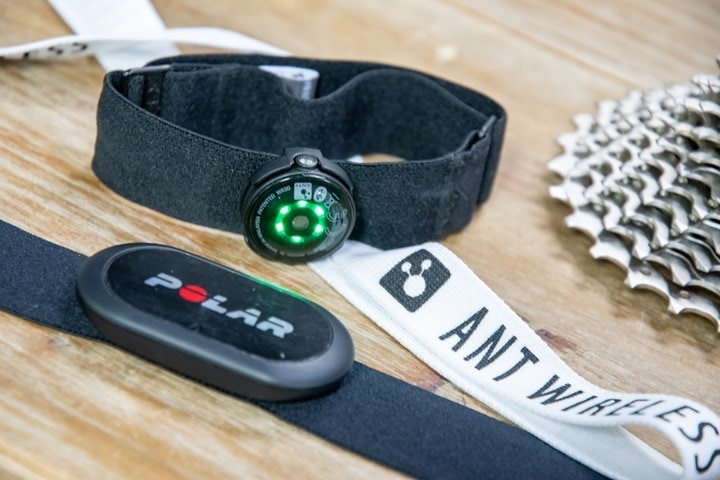 When you woke up this morning, I’m pretty sure the title of the post was the last bit of news you expected today in the sports technology realm. And if you weren’t at the ANT+ Symposium last fall, that surprise would have been justified. But more on that in a second.

Today’s news is that Polar is rolling out ANT+ broadcasting/transmission support to their most recent sensor products, enabling them to broadcast ANT+ alongside Bluetooth Smart. This opens up the doors on these products to more than just Garmin users, but also plenty of folks that may be using apps on desktops with an ANT+ USB stick (such as Zwift on a Windows PC). Or gym scenarios using ANT+.  But of course, with Garmin dominating the market share, this is also about courting Garmin users into Polar’s platform. 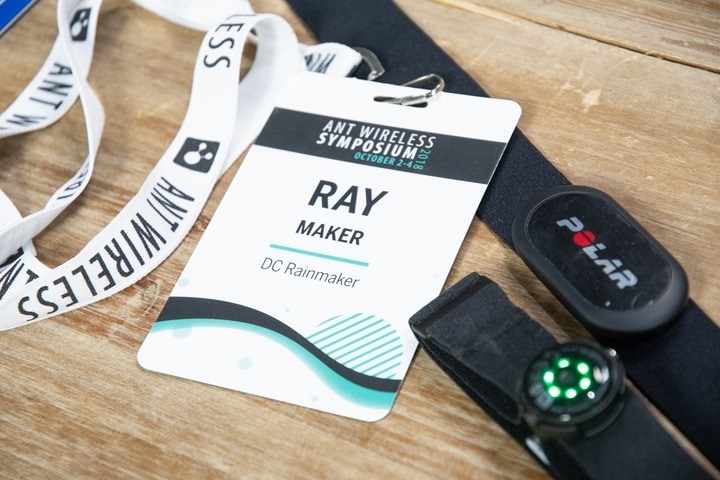 But this change has been one I’ve been quietly waiting for now for 5 months. And one that many others in the industry had been curious about as well. See, last fall at the ANT+ Symposium there had been a bit of a surprise badge holder floating around the conference: An engineer from Polar. One has to remember that the conference is more or less the who’s who of the sports tech scene from a company engineering and leadership standpoint. As such, it’s not super big – about 120-150 people. Many people have been there 5-8 years in a row – so everyone kinda knows everyone.

Thus when someone new walks into the room, it doesn’t take long for people to start asking questions. It’s sorta like that scene in Eyes Wide Shut. No, not that scene. You know…oh, wait, never mind.

Sure enough, Polar had become an ANT+ member prior to the Symposium (but that’s not actually required). They did manage to avoid getting listed on the official attendee list that’s distributed (other people sometimes also avoid putting their names on that list for a variety of privacy reasons – so that’s not a big surprise).

I eventually chatted with the Polar individual (an engineer) later in the conference and got to talking that a move to enable their H10 & OH-1 sensors with ANT+ was likely in the cards for sometime in the first half of 2019.  From a chipset standpoint, the sensors were leveraging Nordic’s dual-capable series, which is found in the vast majority of sports tech products these days. So ultimately, it was as simple as a license upgrade and they could start leveraging that capability.

Of course, Polar would still have to do all the coding work on their product – but that meant it could be rolled out to existing shipped units, and not be limited to just new units.

While I’ll tackle the devices and exact firmware update plans in a moment, I was curious why exactly Polar decided to offer ANT+. After all, Polar has been aggressively anti-ANT+ for the better part of a decade now. A stance which undoubtedly hurt its market share, especially in the earlier part of the decade when Bluetooth Smart wasn’t available or then as common yet (let alone fitness aspects).

Of course, that’s exactly why Polar wanted to focus on Bluetooth Smart – they wanted those standards to succeed. Polar in fact played a huge role in steering those Bluetooth sport focused committees. A message that ultimately carried through Marco Suvilaakso’s [Polar’s Chief Strategy Officer, having been with the company 17 years] answer of my question on why now:

“One of the key elements there is that we know there’s a strong base of ANT+ customers out there who are using ANT+ devices that would love to have Polar sensor technology, or Polar standards of HR in use with their ANT devices. Now that it’s technically possible to pull this off without changing the complexity or degrading any other element, then why not, let’s do it.”

Which is fair enough. With Garmin having close to 95-97% of the cycling GPS unit market share (and even higher for the triathlon segment), it makes sense to try and appeal to that. The same goes for wearable consumers that match Polar’s target audience (meaning, endurance sport people not using an Apple/Samsung/Fitbit Watch). Sorta of a ‘if you can’t beat em, join em’ approach. And it’s a smart one.

Polar H10 sensor is unquestionably more full-featured than Garmin’s equal – the brand new HRM-DUAL strap. The Polar strap has offline activity modes/recording capabilities, which Garmin’s lack.  And many people prefer the battery pod on the Polar strap over the Garmin one. 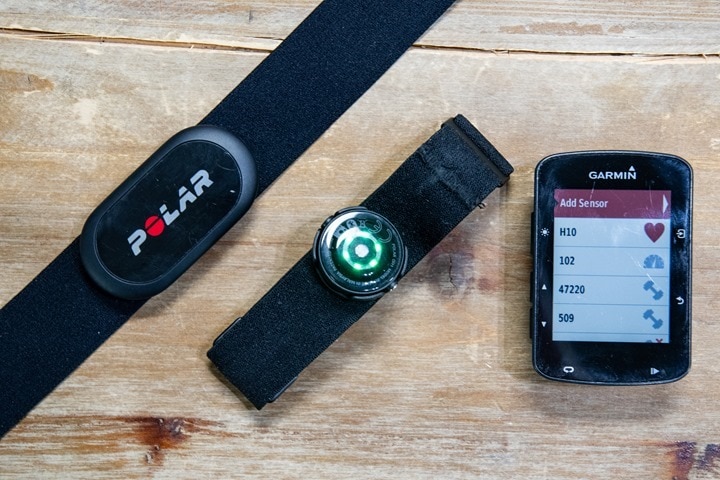 So, which devices are getting ANT+? Simple, here’s the list:

I’ve tested all three with the new ANT+ firmware on them, and all of them frankly work exactly like you’d expect. For example, here’s the Polar H10 paired to a Garmin Edge 520 Plus (which only does ANT+ sensor connections), working just fine: 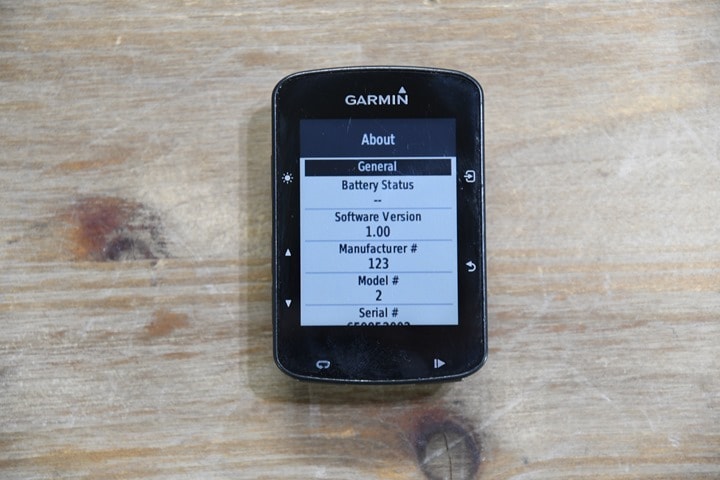 There’s no other strap on the market that has that, period. Not to mention onboard recording capabilities too.

Meanwhile, the OH-1 now has the following:

It does not at this time have dual Bluetooth Smart connections, though from talking to Polar, it sounds like there may be a slight door open to that down the road. That’d be awesome if they can make that happen.

Here’s the Polar OH-1 on Zwift showing the two connections: 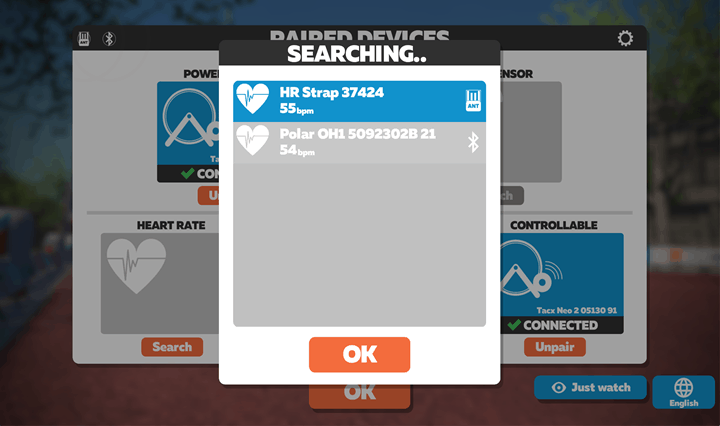 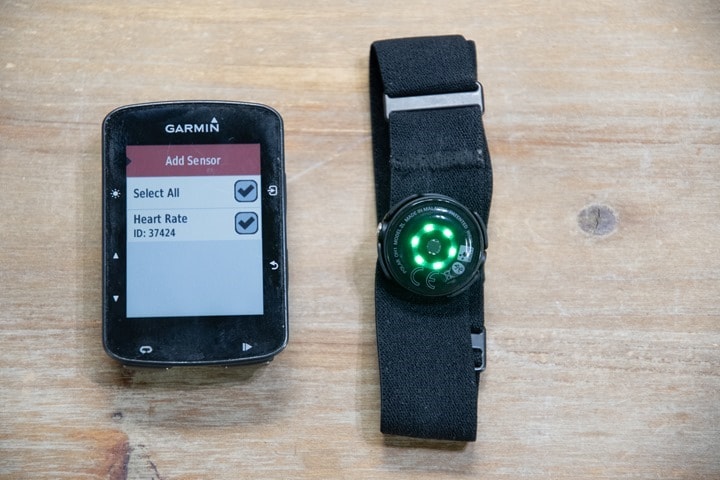 Pairing up with any ANT+ capable device works just as expected, simply search for the ANT+ heart rate strap and it’ll find it. Wham, bam, thank you ma’am. 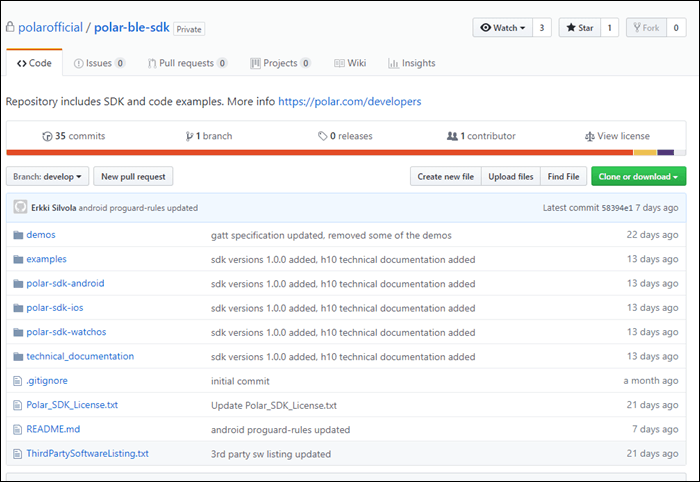 As if adding ANT+ wasn’t enough, as of today Polar now has an SDK that you can download on GitHub, enabling you to develop solutions atop their sensors. In particular the OH1 and H10 HR sensors.  Within that, you get slightly different capabilities.

Starting with the H10 chest strap, the verbatim list from Polar is as follows:

And then here’s the list for the OH1 (again, verbatim from Polar):

So what’s this all mean? Well, it allows both hobbyists and startups to leverage Polar’s hardware for any projects they seem fit, all at far higher data rates and depth than anything Garmin is doing over Connect IQ for external sensors (Garmin does appear to enable deeper watch-accelerometer access however).

Interestingly, it can also read recorded exercise files from the OH1, allowing it to download those files directly.  Polar also notes that while the above repository is accessible immediately per the terms/details laid out there, that if companies want to do deeper commercial efforts – they can do that as well.

Finally, when asked if this was perhaps the start of something more SDK-wise for Polar, specifically around watches, they responded with: “It’s definitely something we’re looking at.” 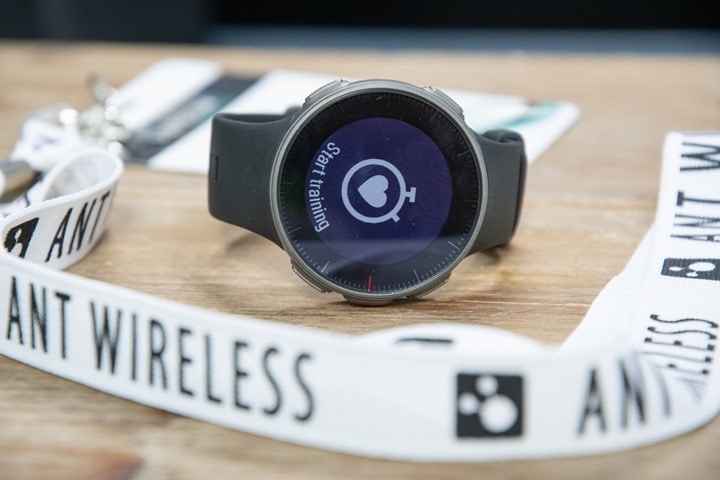 So, the big question now is: What about the Vantage series?

Polar confirmed that series is using dual capable Nordic chipsets that are able to do dual ANT+/Bluetooth Smart. But of course, we all kinda knew that already. Polar’s been using these dual-capable chipsets for years in their products – that doesn’t mean they’re going to spend the development time to add the Polar-specific software layer above that to connect to ANT+ devices.

Thankfully though, when asked, Polar didn’t close that door. Marco said that “It’s something we’re looking at”, but did confirm that it’s technically possible with the chipsets in the Vantage series, but didn’t specify a date/timeframe for when that “something” might or might not occur.

That sounds like it’s Polar being a bit careful on committing to anything at this point. It wouldn’t surprise me if they’d prefer to wait until whenever they update their Polar Vantage roadmap website, to include ANT+ plans in there (I hope they plan to update said communications…).

Knowing Polar and how they word things when dancing around a topic, I’d say there’s a super-strong chance we’ll see ANT+ in the Vantage series. But keep in mind even if Polar decides to do that tomorrow, there’s a slew of ANT+ device types. I’d bet that’d just start off with HR sensors first, and then expand into the most common cycling power/speed/cadence ones, plus perhaps running footpods. I’d love to see them support other device profiles like cycling lights or radar, but that’s probably a big lift.

Still – all of this is promising. While much of the tech world has added Bluetooth Smart sensor compatibility, the reality is that ANT+ sensors are still heavily used in sport, especially in cycling and multi-user gym scenarios. Plus, with more and more users connecting to multiple apps/devices concurrently (primarily indoors), the ability to do that across protocols has become surprisingly important.

Ultimately, it’s great to see Polar doing this, and I’m looking forward to what comes down the road.

(And yes, I managed to finally have a use for that pile of ANT+ Symposium lanyards I kept around for years. Photographically, if only I had a red one…)