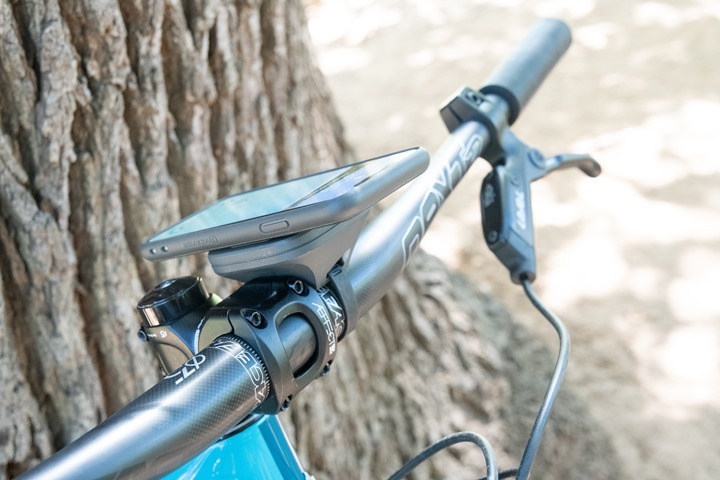 It’s funny how I’m always on the lookout for a good bike phone mount system, despite rarely using a phone as a head unit on my road bike. Instead, I’m more practical in my phone and bike relationship: It’s primarily on my city bike. Yet at the same time, every time I go out on a road/mountain bike I’ve got my phone in my back pocket. It’s always there.

And in many ways, that relationship is mirrored while running. I almost never run with my phone on my arm, but when I do (usually for some data-related test), I’m always impressed with how crappy the experience is. Most phone running armbands require you slide the phone into an ill-fitting case with a crappy front plastic thingy that makes it even more difficult to use your phone – especially on a rainy day or with gloves.

With that context, rewind to about a year ago when the founder of SwitchLok met me at CES to hand over a handful of garage made prototypes with a new phone case and mounting system that’s made for sports. Armed with a pile of prototypes I immediately went out and…well, it didn’t go well.  But he kept cookin’ forward and I met him again, this time at CES 2019 in early January and got the final near-production variants. And I’ve been using it since without issue.

As both myself and The Girl are ardent users of the Quad Lock system, I was skeptical of another quick-release case mount style system designed for athletes. But this one actually impressed me. Will I switch over to it though? Well, let’s dig into the nuances.

(Preemptive usual stuff: These are media loaner units, they’ll go back just like the earlier prototypes did already. I don’t take any money/etc from any companies I review/preview/handle/mishandle/massage/etc…) 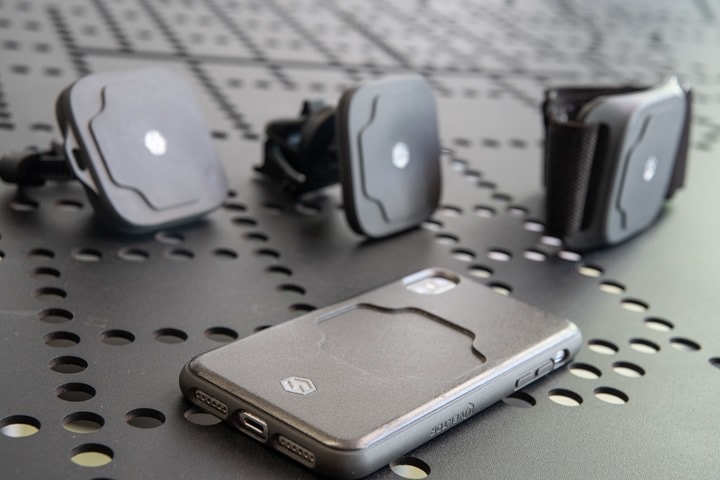 Starting off with the phone case, they’re doing their Kickstarter based on iPhones initially (iPhone 7, 8, X, XS, or XR), since that’s where they get the most traction in terms of the number of molds they have to make. They know they’ll get some hate for that, and are looking to see if they can support some major options like the most recent Samsung devices, but even that’s tricky because by the time people get this mount the latest Samsung phones, expected a few weeks from now, will long be out. 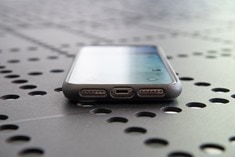 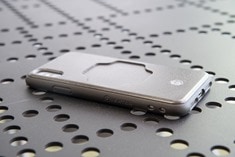 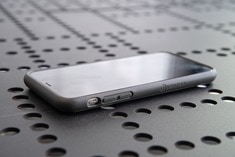 Surprisingly, the case can indeed charge wirelessly, should you have that with you (I didn’t end up bringing a wireless charging mat with me on my recent travels unfortunately).

The case has a gigantic magnet built into the back. In fact, it’s been somewhat funny in that the co-working space I’ve been working at the last few weeks has metal tables. And the first few times I laid my phone down it snapped to the table.  Ahh yes, that’s how magnets work.  In fact, here’s it holding my phone by only half of the magnets and even then, only slim bits of metal inside the holey artsy coffee table: 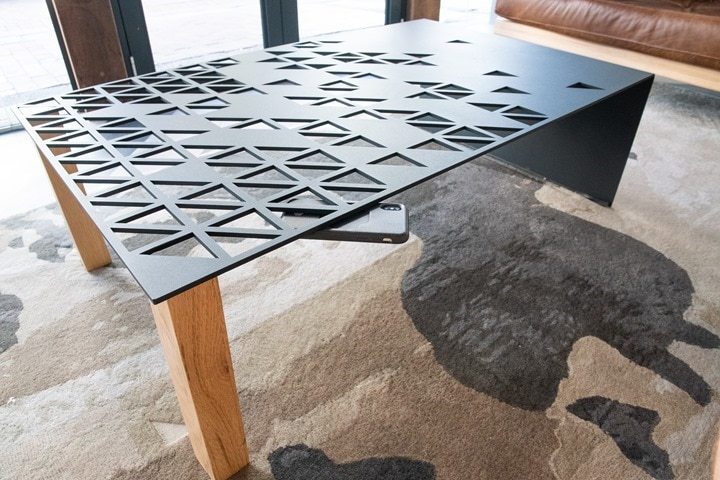 Next, there’s the car mount, which snaps into your air vents. It’s got a pivot point as well to allow you to adjust it slightly left/right/up/down: 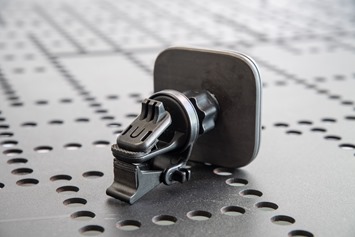 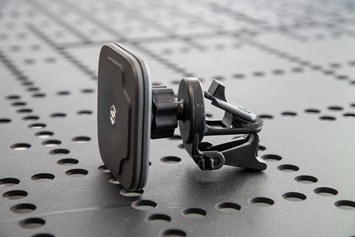 Then there’s the armband. It has stretchy fabric with little non-stick dots on it, so that it doesn’t slide around your arm any. It’s got quite the length of strap on it, such that you could probably wrap it around your thigh if you wanted to. 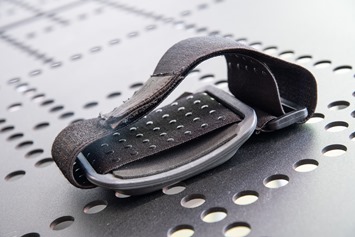 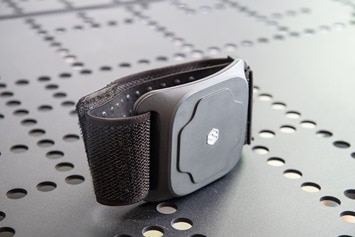 Finally, the bike mount. This uses a hex screw which you rotate to tighten the whole thing onto your bike. You can place it on either the handlebars or your bike stem. Heck, you could even put it on your upper top-tube if you wanted (for example, some mountain bikes may not have a good stem location for it). 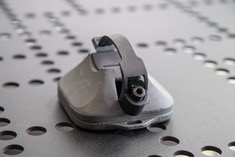 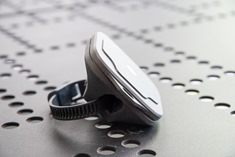 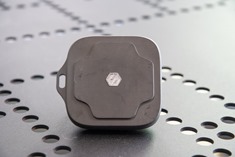 All three mounts have magnets in them as well, which ensures that they make strong contact with the phone case. The magnets are molded within the plastic.

I think before we get to the hardcore testing, the less hardcore bits is just whether or not I manage to break my phone in day to day droppage. I mean, it’s not like I set out to drop my phone daily – but it does seem to happen every once in a ‘while’. And by ‘while’, I mean oddly frequently.  During the last few weeks it’s happened more than one hands worth, all on hard surfaces (concrete, wood floors, and stone tile), and none of them resulted in me having to visit the Apple Store (of which there is none in Cape Town as I’ve discovered).

Also, both my 1-year-old and 2-year-old daughters have pick-pocketed my phone and dropped it a bit without any issue. So there’s that too.

Next, I suppose an easy one – the car mount. This just works. We’ve done some high-speed bumps, including some off-road stuff, and the phone just stayed there: 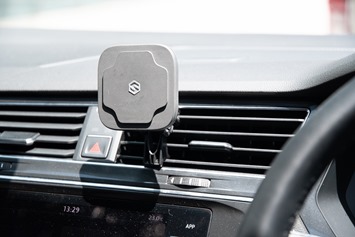 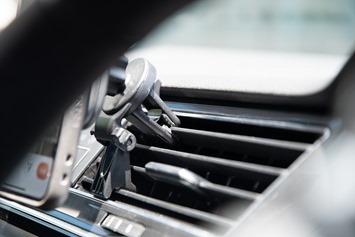 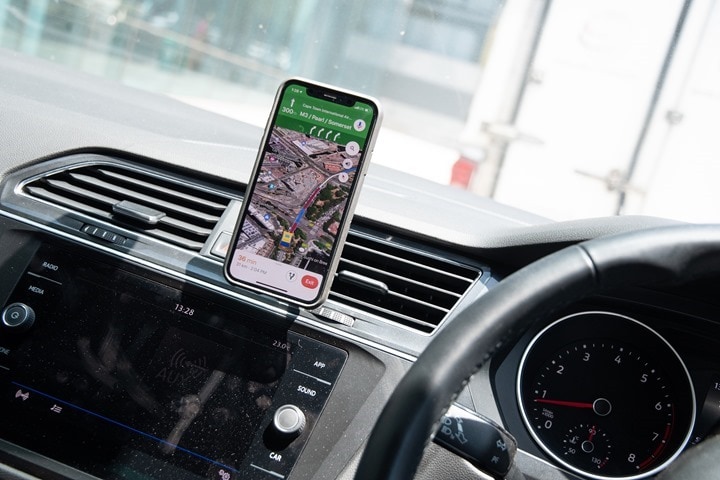 Ok, next, moving up the list – running. Using the armband for intervals on pavement hasn’t resulted in any loss of the unit. 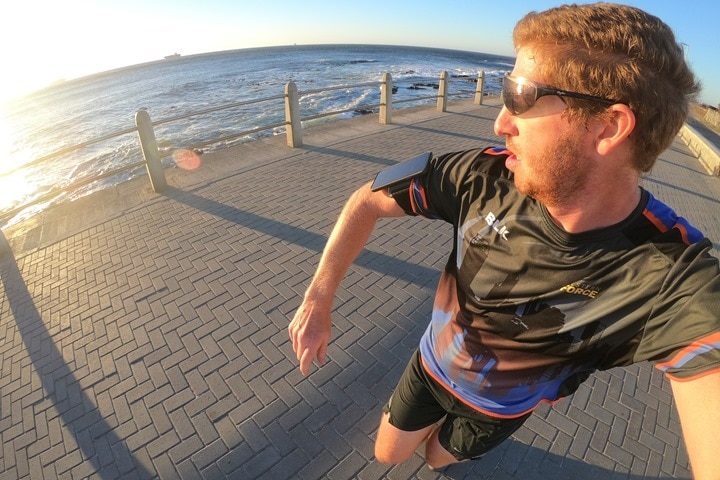 You can also orient it sideways on your arm, in the event that’s somehow your thing: 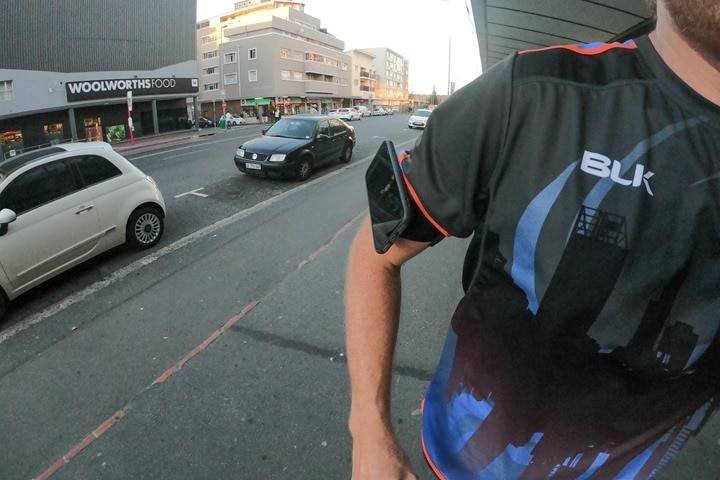 I did try to dislodge it through impacts. So I jumped off the top of a park bench. Not exactly parkour, but good enough to prove the point:

Next – stepping it up – road cycling. No issues road cycling with it on my road bike. I’ve placed it on the stem as that’s my preferred location and even with the occasional pot-holes of Cape Town I haven’t lost it yet. 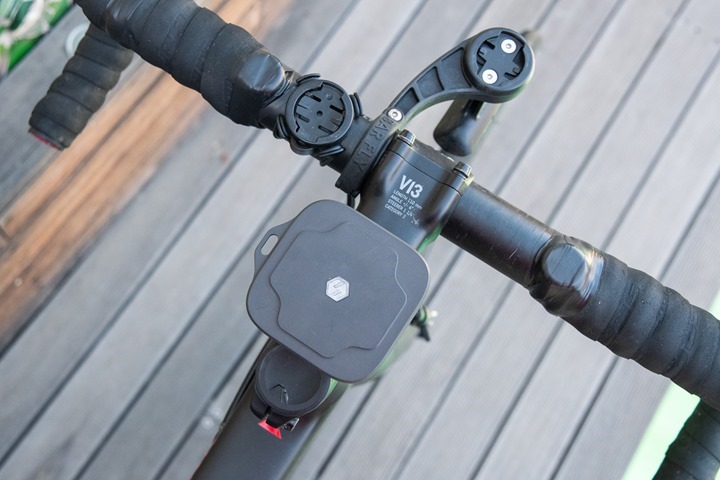 As noted elsewhere, it’s definitely pretty bulky when a phone isn’t attached compared to other mounts. But realistically once you attach the phone it’s no different from a top-down perspective than the Quad Lock situation (wider of course): 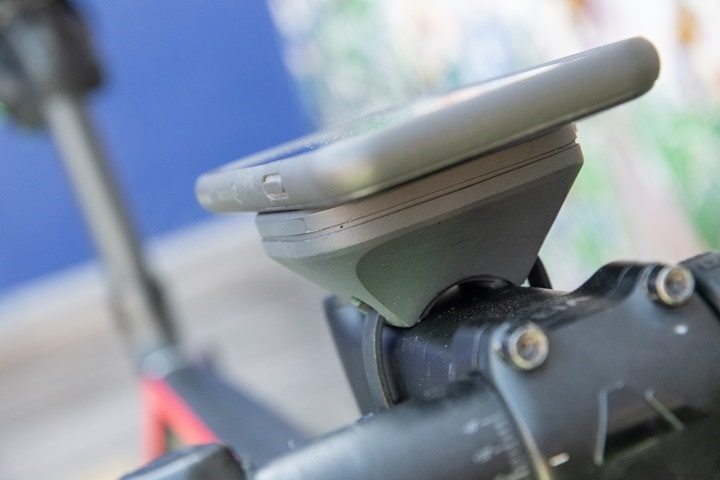 However, I actually kinda like it more as an indoor trainer mount than anything else: 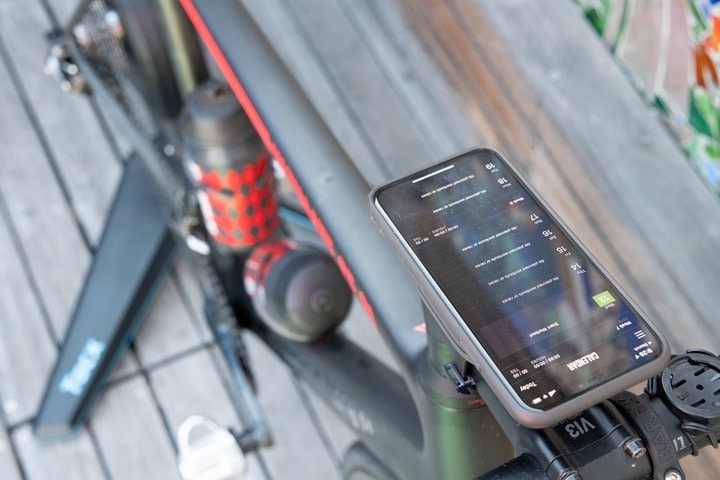 The one thing that’s handy about the bike mount is that I can position the phone both horizontal and vertical: 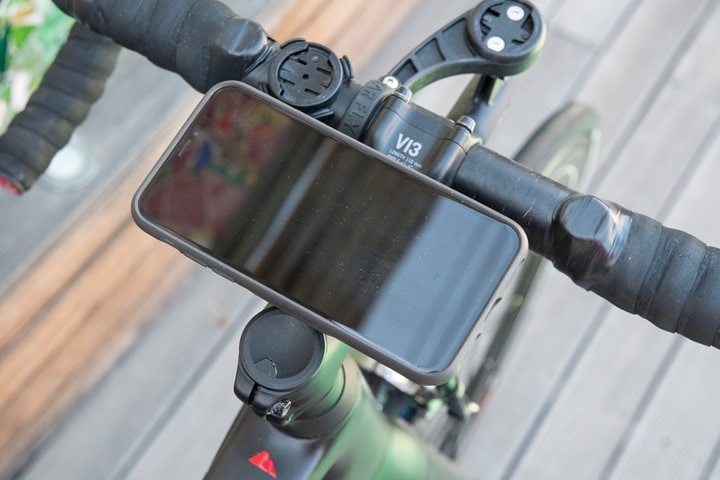 Next up – mountain biking. In this case I used it yesterday for a pile of testing I was doing on some other products repeating the same track over and over and over again at faster and faster paces including a few drops. 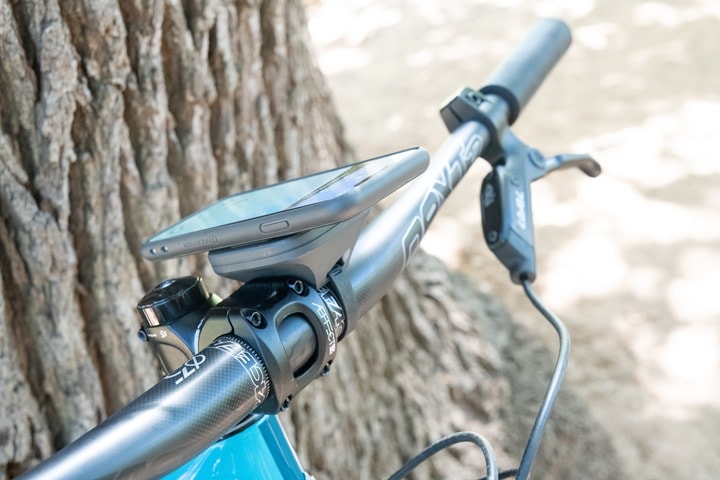 Note that with this specific mountain bike the stem was short enough that I couldn’t mount it there. So I had to mount it on the handlebars. I did a few drops and smallish jumps as well without issue. But I’m hardly an expert when it comes to off-road cycling. In general my goal in mountain biking is to avoid crashes, so bodily endeavors that put that goal at risk are usually avoided. Including all types of acrobatics – intentional or otherwise. 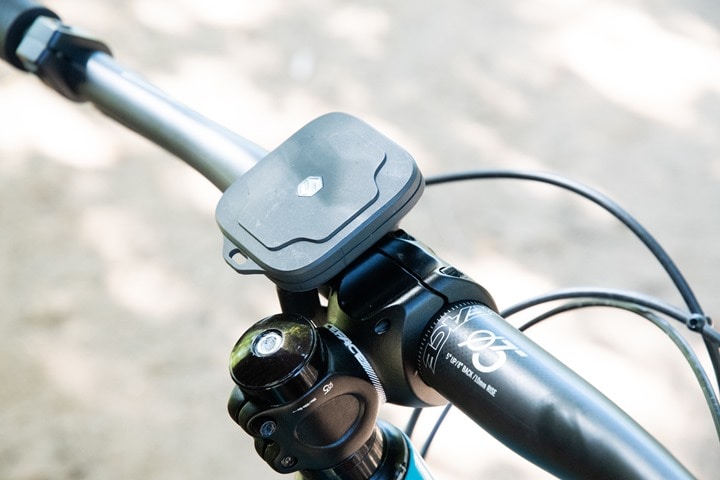 So – what are some of the downsides?

Well, just really one: It’s a beast of a bike mount: 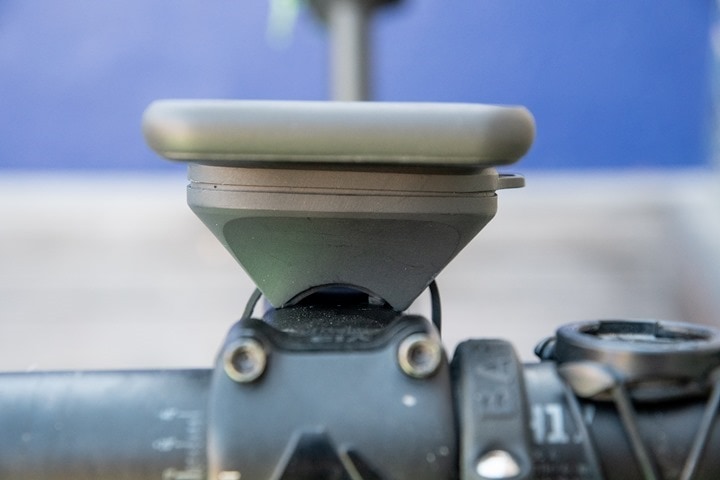 Seriously, it’s huge. For me personally, it’s just too big to live on my road bike when I want it there for casual use.  Whereas I do sometimes leave the Quad Lock mount on my road bike for large stretches of time because it’s relatively small.

Now during this past month or so I’ve almost extensively been on the road travelling, so I was only home in Amsterdam a few days.  And ironically, it’s those bikes back home in Amsterdam that I’d prefer it be on.  For this bike and my around-town bike, I’d likely choose the SwitchLok system because I’m frequently wanting to remove my phone quickly to jump into a shop or even just grab it to take photos mid-ride.  While the Quad Lock is fine on my commuter bike, on the cargo bike the rotation actually clunks into the gear indicator as well as the main built-in display. So it’s kinda wonky and thus the SwitchLok would definitely be better there.  Maybe I’ll switch when I get back in a few weeks. 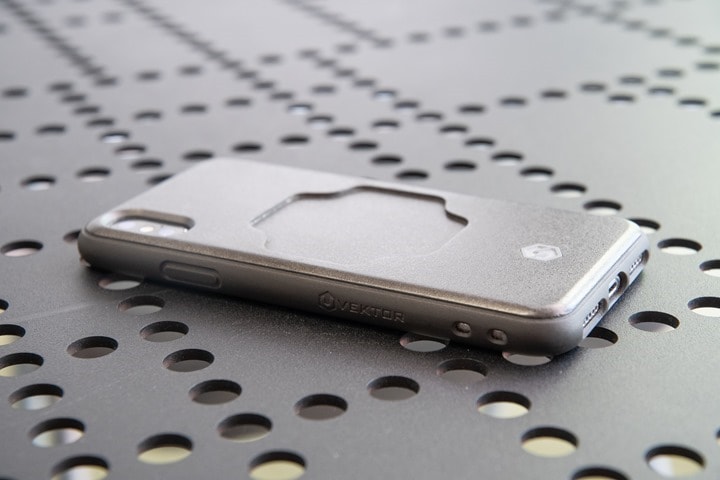 The latest SwitchLok pre-production units I used are pretty solid. I’ve had zero mount issues and zero case issues, and from an overall case usability standpoint – zero issues there either. It all just works. Right now in travelling for the past month it’s been useful having the car mount for my phone – though normally we don’t have a car in Amsterdam and thus I don’t have much use for that mount the rest of the year.  Still, the fact I can basically use one mount connection point across all devices is appreciated.

Of course, these mounts/cases are somewhat expensive at $93-$105 for the case + two mounts. And SwitchLok knows that too – they see it as a premium collection that is designed to take a beating.  And I suppose that’s fair. There are plenty of cheaper bike, car, and armband solutions out there – but none of them that I’ve poked at (except Quad Lock) seem to match this level of durability.  Of course, that durability in the case of the bike mount makes it a wee bit clunkier, though that actually raises it basically the same height as the Quad Lock.

As always, it is a Kickstarter project – though I see this as a super low-risk one. Still, Kickstarter is not a store, and the timelines are often more Jello-like than concrete. Of course the benefit is that you typically get reduced pricing on Kickstarter to offset the risk of crowd-funded projects.