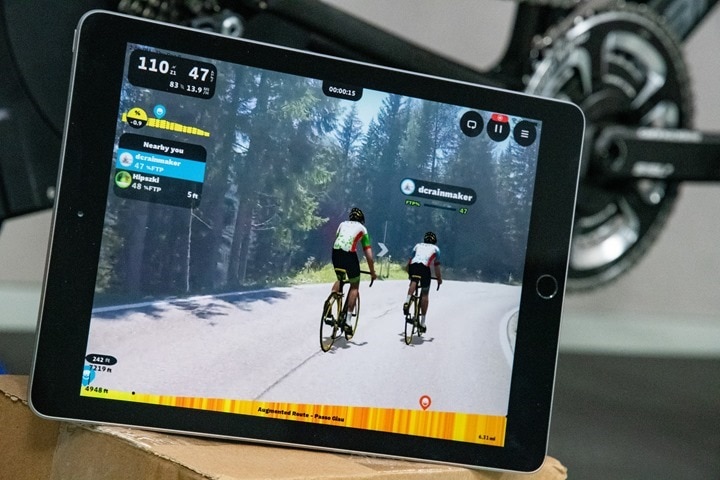 First off, no, ‘augmented reality’ does not mean ‘virtual reality’. Two totally different things that share very little in common, except the word reality. Like ‘alternate reality’ – which is what happens when you don’t train all winter and think you’ll win your age group next spring. Or ‘reality TV’, which stars people from New Jersey doing…well…I have no idea.

So what is ‘augmented reality’ then? Well, it’s essentially when you take something real-world – like either video footage or actually the real world outside, and then overlay stuff atop it.  For example, there are apps for your phone that allow you to point your phone at the sky and it marks out constellations perfectly.  Or apps for ski areas that overlay the ski run names on them as you move your camera around.  That’s all augmented reality.  It’s taking something real-life/real-world and augmenting it with additional information.

Bringing this back to Rouvy, they’re one of the best ‘all-around’ indoor training apps out there. By that, I mean that they aren’t siloed into a single thing (such as Zwift for virtual world, or TrainerRoad for structured workouts). Instead, they’ve got a lot of varied features that might pull in someone that wants diversity in life. They’ve got real-course type videos, structured training ERG-type stuff, online races, and so on. But this post isn’t about all that stuff. It’s just about this new augmented reality thing.  It’s something they demo’d this past summer at Eurobike (and I even made a video about it then). It allows you to race or train against other virtual riders on real-world outdoor videos.

If you want a nice and tidy one-shot wonder video demoing it all that I shot while I waited for Uber Eats to arrive, then go forth and whack that play button:

But now it’s out and available, and it’s time for me to give it a quick lunchtime test ride.

As of now, this is available for their iOS (iPhone/iPad), Android, and PC apps (Mac won’t hit until next trainer season).  You can easily find those in their respective app stores.  You also will need either one of their free trials, or their normal subscriptions.  And of course, you’ll need a bike and trainer.  If you’ve got a smart trainer then it’ll control the trainer based on the terrain that you see.  They support all the latest trainers, and for today’s test I paired up the new Tacx Neo 2, which was already listed there.

I would say that this is one area that I think both Rouvy and Kinomap overthink. I don’t really need a gigantic list of smart trainers to choose mine from. Just simply scan what’s nearby and show me what I can connect to (just like Zwift and TrainerRoad do). Makes for a much cleaner interface.

Anyways, with that all set you’ll choose augmented routes on the left menu system: 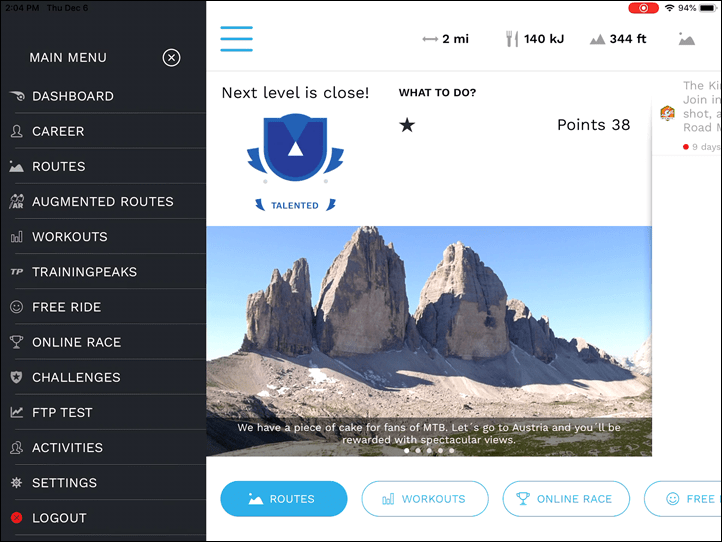 That’ll bring you to a list of about a dozen augmented reality courses.  The company has thousands of videos, but for the moment are just enabling this collection of ones for augmented reality. They mentioned wanting to do that mainly to focus on fixing issues and such with a smaller sample size – rather than trying to chase bumblebees across thousands of videos.  Once they feel confident in where things are, they’ve noted they’ll quickly enable it on the full collection. 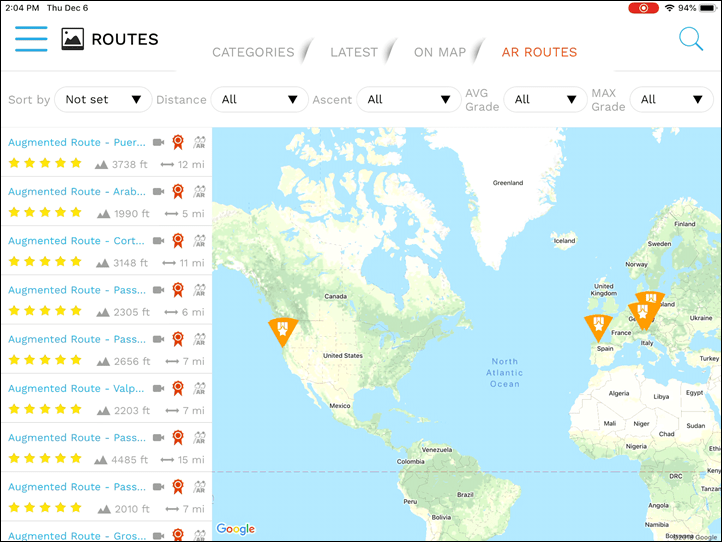 If you click on a given route you’ll get information about the distance, elevation gain, avg/max grades, and both the route and current record.  There’s no direct integration with Strava at this time for segments on these popular routes, which would make for a great integration to race your friends directly with their avatars. 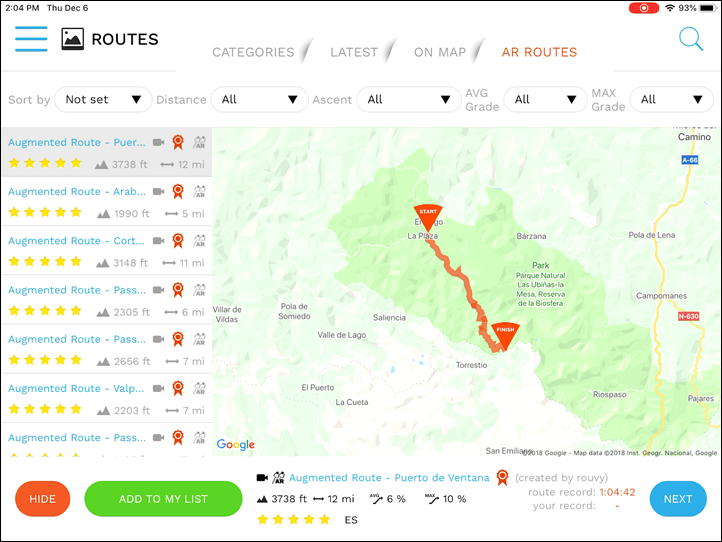 After that, you’ll select your trainer, as well as choose whether to stream or download the route.  In my case, I selected to download it, so I can minimize any video latency issues.  Down below you’ll see the augmented reality bit, and whether or not to enable it. By default, it’s enabled since that’s the feature area you’re in. 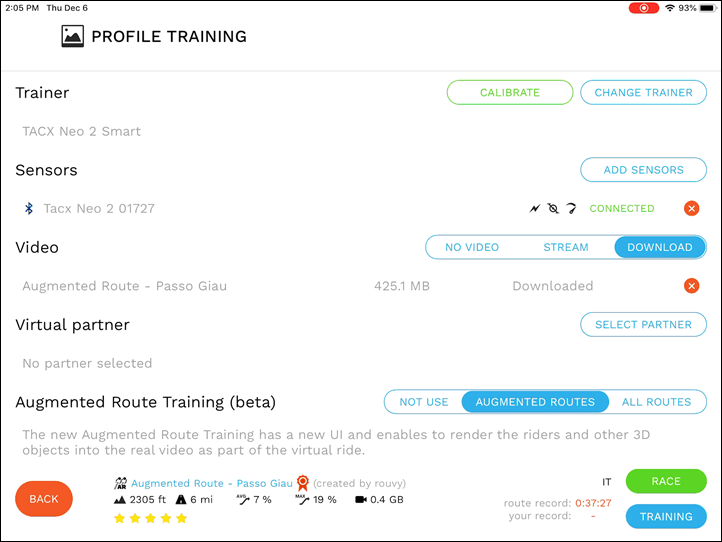 Oh, and you can also add/select Virtual Partners to add to the game.  So if you had friends that rode it, you could ride against them here (assuming they were on Rouvy as well). At present it appears to only allow me to select one partner for iOS/Android. Monogamy and all that. Windows is less into traditional relationships and allows up to three partners. However, if in an event, then up to 100 riders at a time can be within that event on the course. 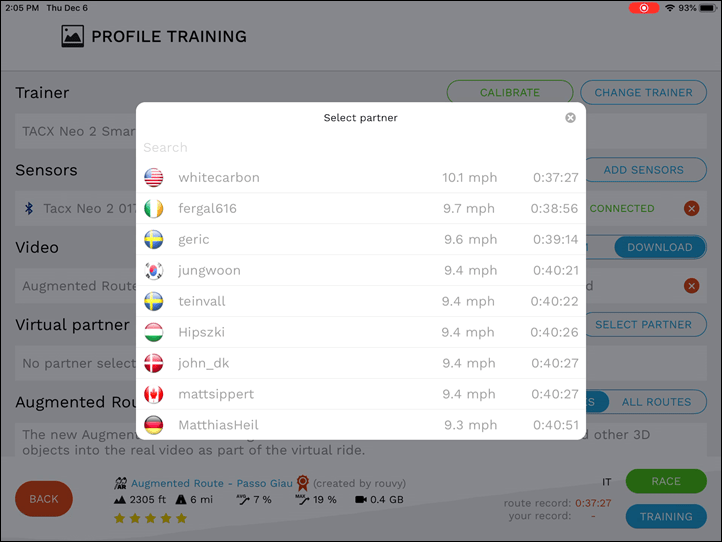 Finally, at the bottom there was the option for ‘Race’ or ‘Training’. Within Race it’s pretty much as you’d expect – you start and then when you get to the finish, it’s done. There’s no pausing it or anything. It’s all HTFU. Whereas in ‘Training’, you can auto-pause as well as move around within the course.

Once you’ve decided, go ahead and whack that button to get started. In my case I chose just a straightforward ‘Training’ session’. At which point you’re ready to start pedaling.  Once you’ve done so, the session automatically starts and you’re off to the races (or training) on the real-world video route you selected.  By default you’ll be in 1st person view, so you won’t see your own bike.  But I like 3rd person view, so I changed it to that: 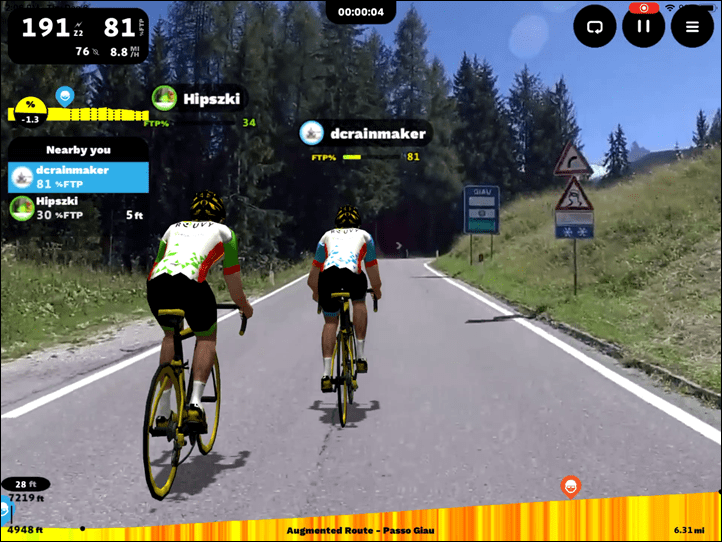 I quickly saw the virtual partner person I selected, and then just as quickly put them in their place and put them behind me.  And in a nutshell – that single sentence encapsulates the entire concept at hand.  I’m riding a video shot outdoors on a beautiful sunny day, while seeing a virtual me and my virtual friends on the screen. When I go around corners the camera angles change correctly to see one side or the other of the virtual riders: 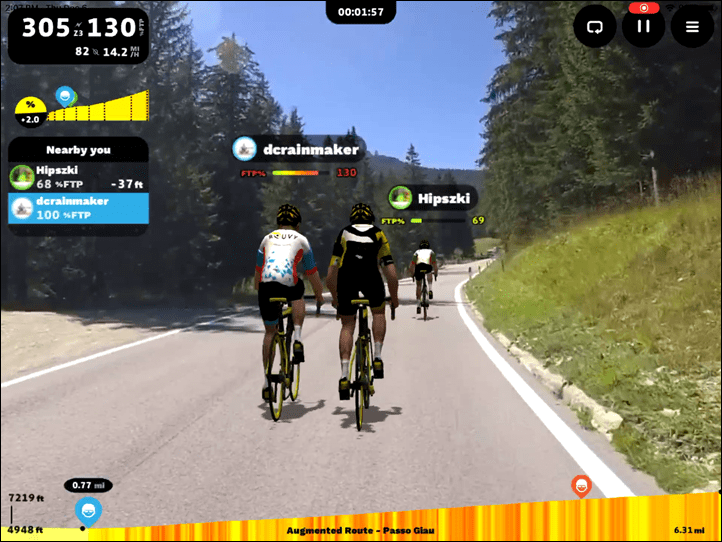 There’s also ‘ghosts’, or basically little racer bots out there that you’ll pass or be passed by.  This helps keep it interesting if just riding solo-cup.  These are shown with the black and white jersey on them above.

In addition, there’s a variety of structures added to the road by software.  For example, gradient signs pop up out of the earth Super Mario Brothers style, showing you the current grade. While I like the signs, I think the animation and frequency is a bit overkill. 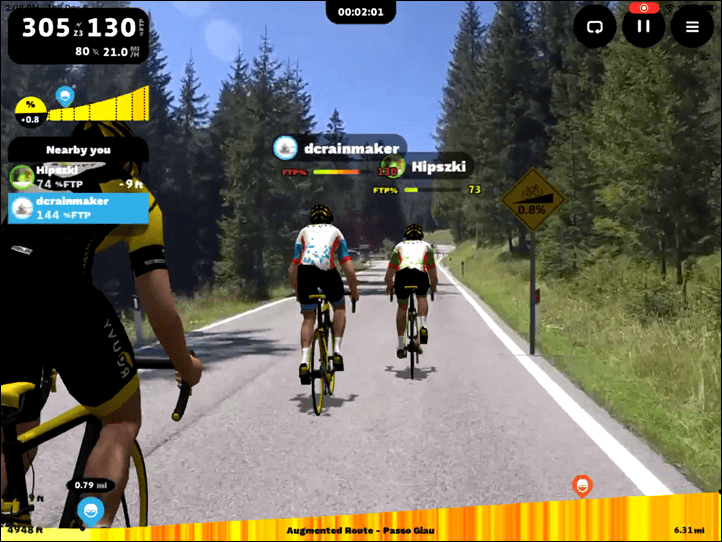 There’s also split banners (for various kilometer markers), as well as finisher banners. In fact, you’ll even see barricades overlaid onto the road: 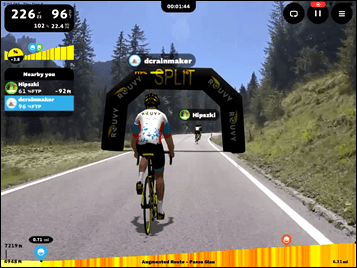 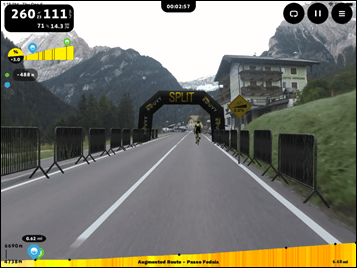 Most of the time these look pretty good, but sometimes it just doesn’t quite work.  For example, you’ll get what could only be an angry Department of Transportation road worker who has placed a gradient sign smack in the middle of someone’s driveway. 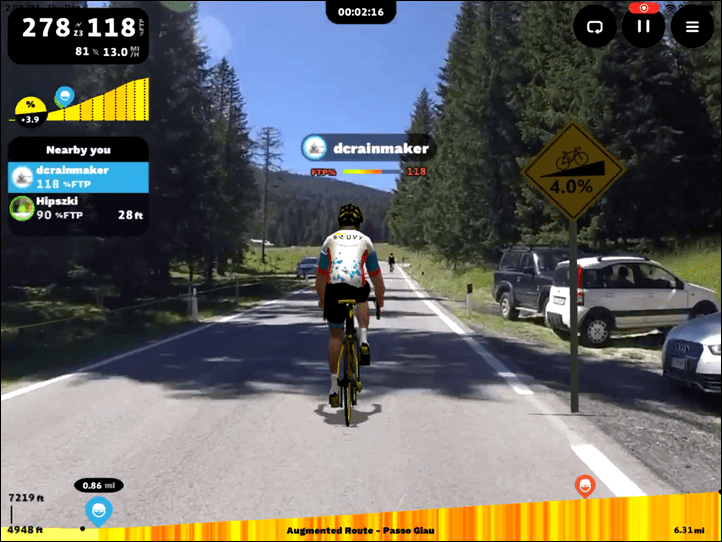 But these little quirks aside – what Rouvy is demonstrating here is fascinatingly cool.  This is especially interesting as you look to eSports and allowing people to replicate real-world races indoors.  After all, the vast majority of major cycling events already have videos inside of Rouvy today. That hard part is already done.  What happens next is when Rouvy decides to flip the switch on the 2,000+ courses they have uploaded and allow you to not only show augmented reality on them, but run races on them.  Starting next week the company will be soft-launching the racing feature, allowing people to create races and then join specific races on specific courses.

I do think that Rouvy is ripe for going the Apple TV route. When I look at what FulGaz did there – it’s just so efficient and frees up my phone to do other things while on the bike. Whereas here I’ve gotta either have a dedicated expensive box or takeover my iPad. But that’s a minor nit. 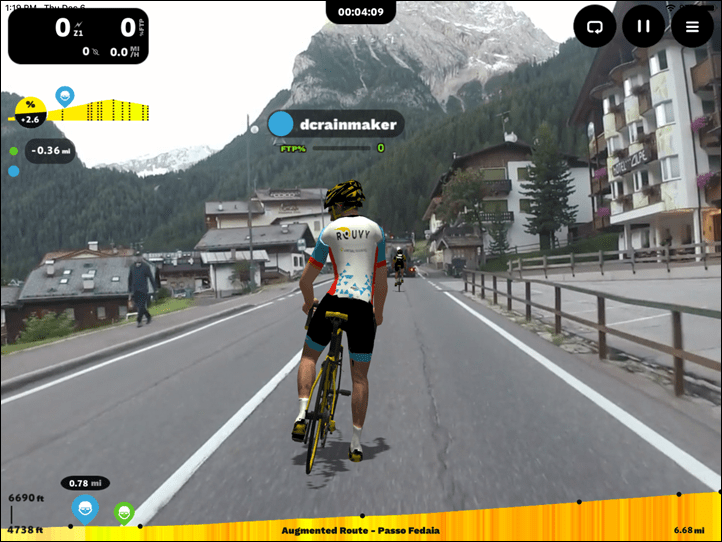 Will augmented reality cycling appeal to everyone? No, of course not. But neither does Zwift or TrainerRoad or SufferFest.  Just like ice cream flavors, everyone has their own favorites.  Of course, Ben and Jerry’s Chocolate Fudge Brownie is the best, so as long as we agree there – I’ll let you think anything you want about trainer platforms.

And what’s interesting here is that this isn’t Rouvy’s only trick. Up until they’ve added this feature they’ve got plenty of people that are quite happy with the existing features.  So this is sorta an icing on top of the cake (or ice cream) type scenario for them.

Now as you can see in the video – there are some quirks here.  Namely that when any company (be it Rouvy, FulGaz, or Kinomap) plays back recorded outdoor footage, they have to speed it up or slow it down to match your speed.  So that means that if there’s a large difference between the recorded speed and the playback speed, it’ll look wonky.  You can see that in some of the cases here.  Companies do various things to try and minimize this, but ultimately you’ll notice it.

Additionally, you can’t change perspective on it either.  So you’re always looking straight ahead.  Changing perspective would require a 360° camera and that would significantly increase bandwidth, storage, complications and just life in general.

Still, I think this is fascinating and would love to see what it looks like with some big races on it, and especially as the technology continues to mature based on user suggestions over the winter (they’ve been running a public beta for about a month now, so a lot of that feedback has likely already arrived).