Zwift rolls out Innsbruck course to everyone: All the details 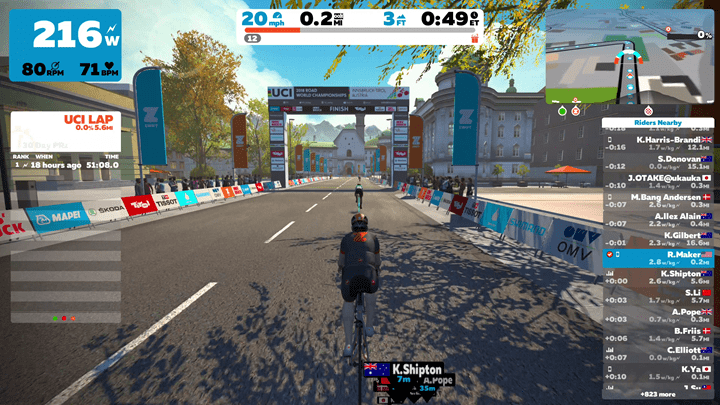 Earlier this morning Zwift lit up their newest course, the UCI Innsbruck World Championships, in Innsbruck, Austria.  This course has been known since earlier this summer, with more details spilled at Eurobike last month – including the exact routes that would be modeled in Zwift.  I even went out and did a ride on the real-life route, just for the heck of it.

Since then I’ve had a couple of days to ride the new Zwift Innsbruck course, and overall I like it.  It certainly beats the previous UCI World Championship course modeled in Zwift – Richmond, so definitely glad to have more options.  Albeit, still no option to change worlds as we see fit.

In any event, this post covers the new map including the various routes on it.  But if you want the quick jam-packed video version of it, then just simply start here (I also have a very non-quick 55-minute version too down below further in the post, for those with extraneous time on their hands).

With all my video editing skills depleted, it’s time to talk routes.

There are essentially five routes available, but all of these routes take place on what is a figure-8 course that is split between two portions: City and mountain.  One loop for each, intersecting at the base of the mountain.  On the overall course map below, you can easily see the two distinctive loops: 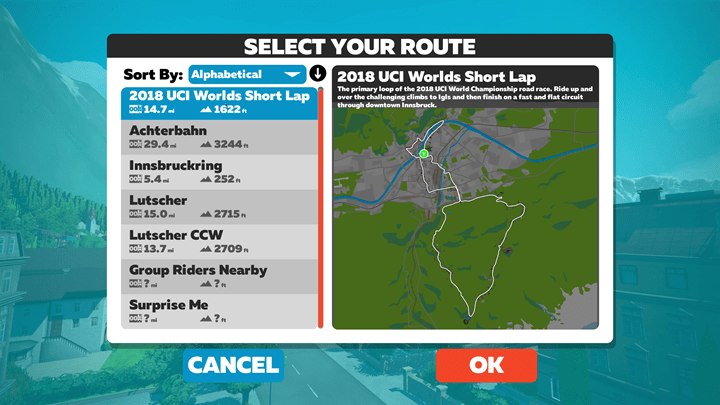 Within the city portion, which totals 5.5mi/8.9km, it’s mostly flat, save for a solid 8% grade hill lasting about 400m or so towards the back of town– just long enough to easily breakup races being held solely within the city portion.  The city portion also has a single short sprint (that can be approached from either direction) on it as well, lasting .2mi in length.

Meanwhile, the mountain portion is painfully simple: One side up, one side down. As you leave town you’ve got a binary choice: Left or right. Go left and it’s a longer climb at 4.6mi/7.4km but a tiny bit more shallow (average grade is 5%), whereas if you go right it’s steeper (7%), but the climbing pain is over in less distance (3.6mi/5.8km). No matter which selection you make, the grade is all up to the summit, with gradients often stretching into the lower double-digits, and virtually never any less than 2-3%. Meanwhile, the descents are quick and windy.

Zwift has broken this out into the aforementioned five predefined courses (as always, you can control your own route too).  They are:

2018 UCI Worlds Course Short Lap: This is essentially the main route, and is the full figure-8 once.
Achterbahn: This is the complete figure-8, along with a second helping of the climb, doing each climb side once for fun.
Innsbruckring: This is the city portion, inclusive of the short 400m or so climb at 8%
Lutscher: This is the city portion plus two climbs (but only one descent). You end at the top.
Lutscher CCW (Counter-clock-wise): Same as the previous one, but just with the steeper climbs instead (still twice).

This course is obviously modeled after the upcoming UCI Worlds Championship event to be held in September in said city.  Of course, Zwift is no stranger to UCI courses.  Everyone knows the existing UCI Richmond course is in Zwift, so this is essentially copying that model.  In the case of the Innsbruck course, it wouldn’t make sense to replicate the entire set of courses.  There are different courses for men and women, and some of these routes start a long way out of town, as seen here on the Men’s Elite course:

However, all bits of all the race variants include the ‘Olympic Loop’, which is a bit that goes through town and then up a large hill and back.  Everything in Blue is what Zwift is doing.

As you can see throughout the video, Zwift included some major landmarks along the way, but also took a number of liberties as well with the scenery.  The exact route/road though from a terrain standpoint should be identical to the real thing.

I’ve had a chance to ride the route a few days now, and overall it’s pretty solid. Having ridden the mountain portion of the route in real-life, it replicates much of that very well, especially the views and the feeling of the forests at the top.  Same goes for passing some of the smaller villages and typical Austrian style buildings.

Of course being Zwift, it’s a bit more polished than real life.  The reality of that mountainside is plenty of non-picturesque buildings, sketchy gas stations, and other non-scenic elements.  But certainly most people aim to dive into Zwift to get away from all that, and Zwift has done exactly that.

Assuming you’re doing a blend of city and mountain portions, you’ll start off near the UCI Worlds Course start/finish line.  About .2 miles in front of it actually, so you can get a few pedal strokes in before it’s time to start cookin’.  You’ll likely see what I believe to be the first train in Zwift, which cruises on some overhead tracks past you: 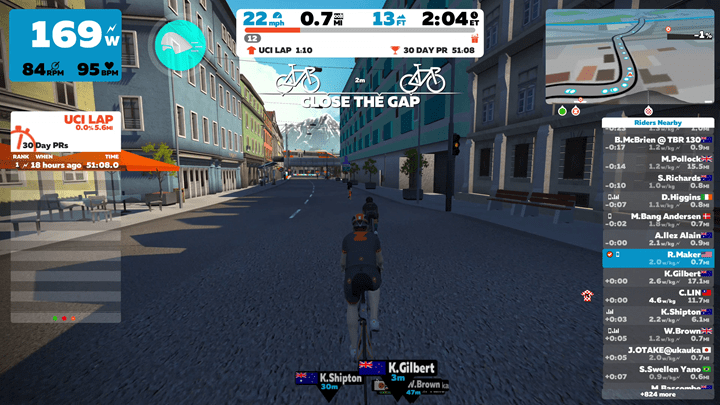 After that point you’ve still got another mile or so until you hit the base of the climbs.  It’s at this point that you’d select either to go left or right.  Left is slightly shallower but longer, and right is slightly steeper but shorter. It’ll be painful either way. 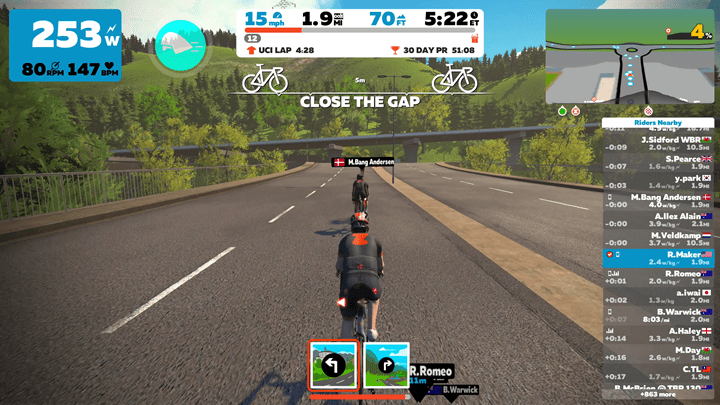 Right before you make the turn you’ll go under the highway, which includes actual moving cars – another first I believe in Zwift.  The traffic on this highway in real-life is definitely a part of riding in that area, so it’d have been an odd choice to omit it.  Albeit, there’s no sound of the highway as there is in real life (which is quite loud). 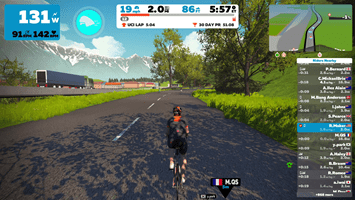 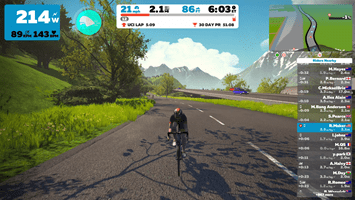 After this it’s all climbing all the time! You’ll simply work your way up the hill to the peak.  There are various groups of crowds cheering for you, along with plenty of mountain views. Here’s a small gallery as you climb up: 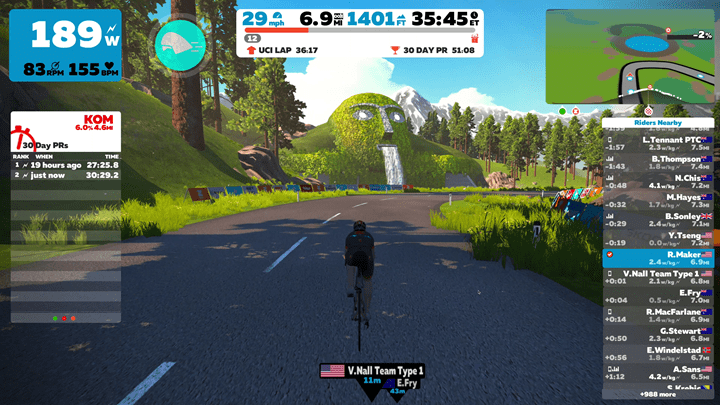 I can assure you – that does not exist in real-life….at least not in this spot! It does however exist about 12 miles away at the Swarovski theme park. Meanwhile, in real-life at the top of the course, you just make a casual right-hand turn in the middle of a field: 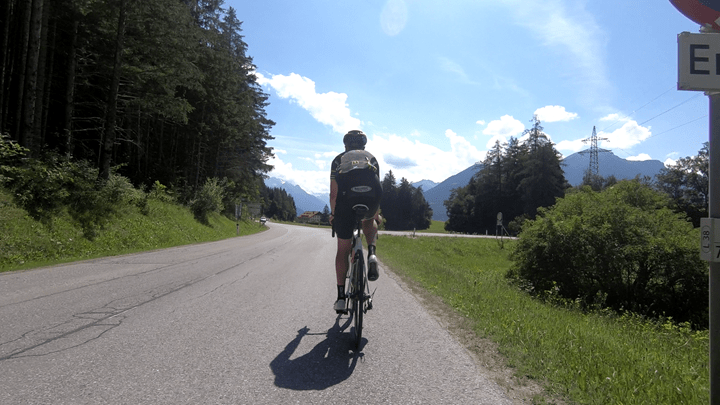 After this it’s a steep descent back to town.  In Zwift-land I clocked speeds upwards of 50MPH without too much effort. 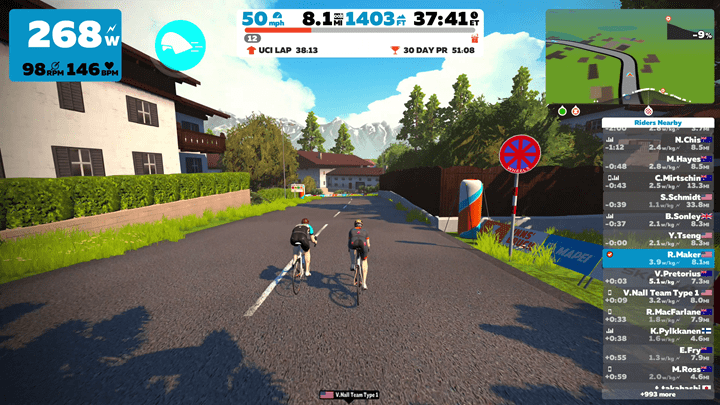 In real life, I got stuck behind a bus: 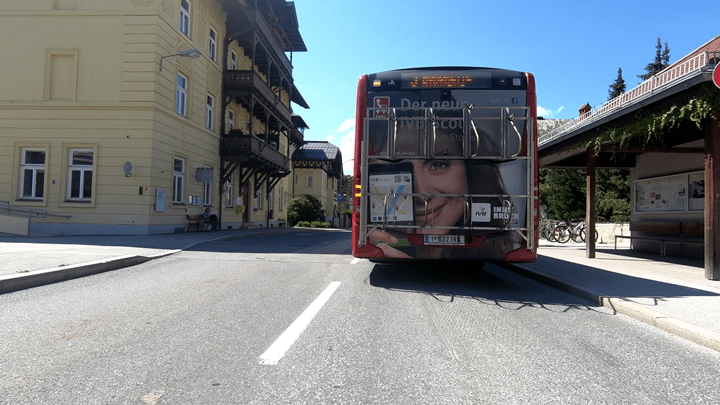 You will see some iconic structures on the way down, including the ski jump off to your left side: 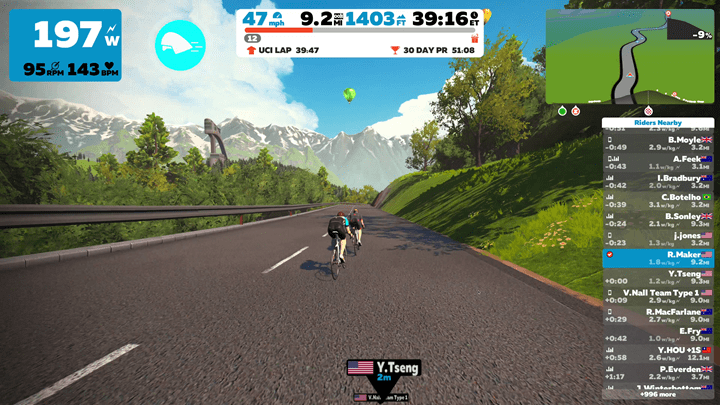 Ultimately though you’ll be happy you aren’t climbing.  Just remember though – the pros have to do the climb seven times during the event. Yes, seven.

You’ll hit the same highway underpass round-about junction as before, and this time you’ll head through town, which is largely pretty flat for a few miles:

It’s in the far back edge of town, nestled up against the ‘other mountains’, that you get treated to a short 8% climb, lasting about 400m, but that doesn’t take into account the shallow climb that started about 400m prior to that. 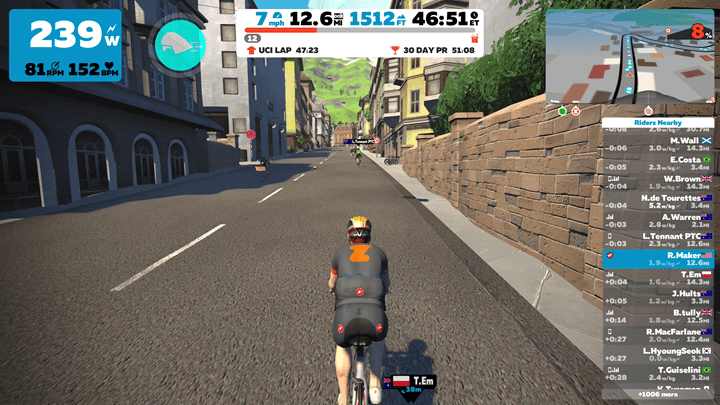 The top includes a near 180° turn back on itself for a quick descent: 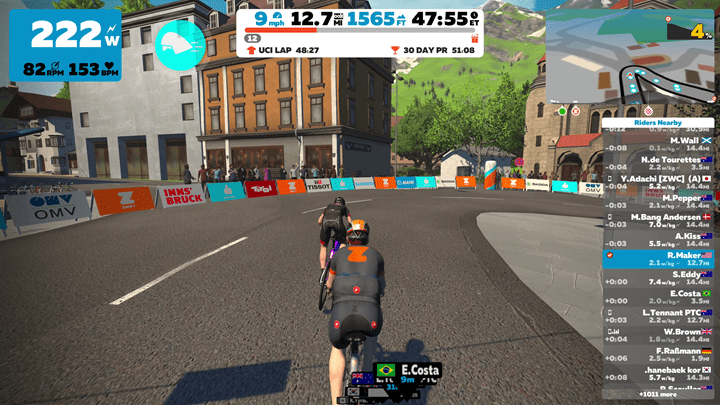 About 1-2 minutes later you’ll hit the only sprint line in town, which is a short 0.2mi long. 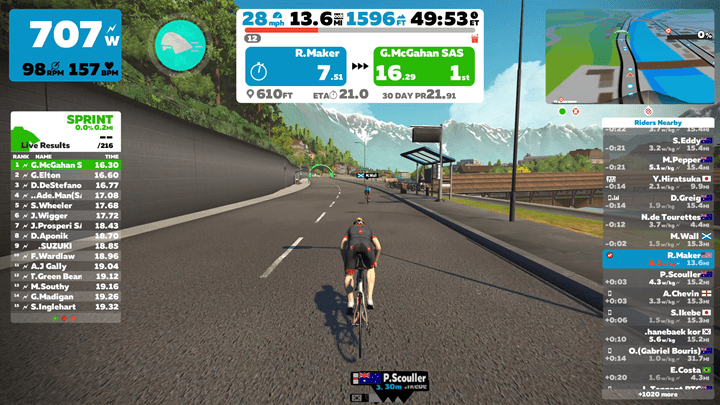 After which it’s 1-2 miles on the flats till you’re back at the starting line: 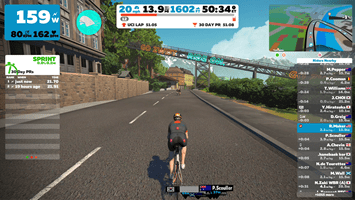 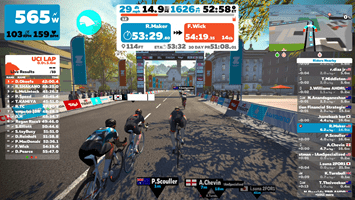 Wanna watch my entire ride (chain-drop and all)? No problem, here you go – 55 minutes of…me riding. Hey, at least it’s in beautiful 4K!

Ultimately, all you need to know about this course is that it’s a figure-8 with two parts: Mountain and city.  The mountain part hurts, the city part is pleasantly flat. 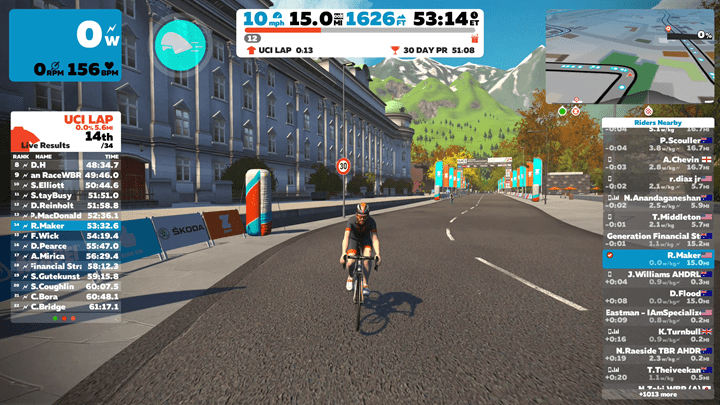 Of course, Innsbruck won’t be the last new course we see this year.  In the next couple of months Zwift will also release their planned NYC course, for which they’ve been pretty slim on details.  The real question everyone keeps asking though is when we’ll be able to select from different worlds (aside from the ‘Zwift World Hack’ anyway). In my ideal world we’d be able to choose from perhaps 2 courses on any given day.  That offers a good blend of ensuring plenty of people, while also ensuring I don’t have to ride Richmond or London again (unless they somehow occur the same day, which means the Zwift gods really hate us).

As for Innsbruck though, I feel like it’s a great weeknight course.  As you saw, it took me about 55 minutes to do the full loop at a non-crazy effort/pace. Just sorta cruising along enjoying it.  I could certainly do it faster with more pain if I wanted a harder workout.  But it keeps things at under an hour for the full normal loop, or if you wanted more pain you could do some of the other variants including double-hill repeats and such.  Or not.

Ultimately, this is all good stuff in my opinion.  I don’t really have any complaints here – it all works just fine and is a welcome addition to my weekly repertoire.