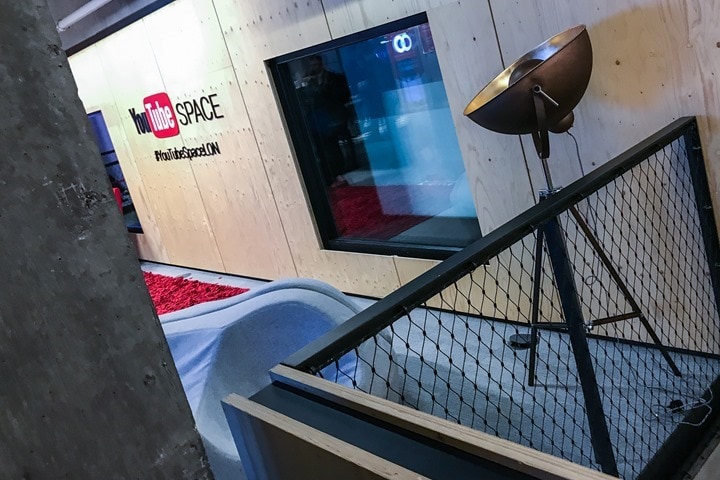 When I was still working in the tech industry, one of the things that was cool about my job was that I was ‘required’ to squeeze in 4 weeks of training per year.  I say required in air quotes because sometimes the total days done was a bit Jelly-like, but in general, that was roughly what we’d get.  And what was cool about it was that I could get training on basically anything in the world I wanted, within some level of reasonableness.

It could be some bizarre tech thing that was vaguely related to my job, or perhaps some course related to the specific industries I focused on.  Might even be something like leadership or whatever else training.  You get the drift – the world was my oyster (and I was able to more or less travel anywhere in the world to get that training, assuming I could work up a good enough excuse to convince my boss).

Of course, once I left that full-time job for doing the blog full-time, those training opportunities went away as well.  Sure, my day to day life doing DCR is one never-ending training.  I’m always learning new devices and new gizmos.  Same goes for learning how to service new bike components I’ve never seen before, or how some element of heart rate research works.

But ultimately, I don’t do structured training anymore.  And sometimes it’s just interesting to sit down with the smartest people in a given field and have the opportunity to go back and forth on a topic while you apply it in person.  So, that’s what I did not so recently ago. 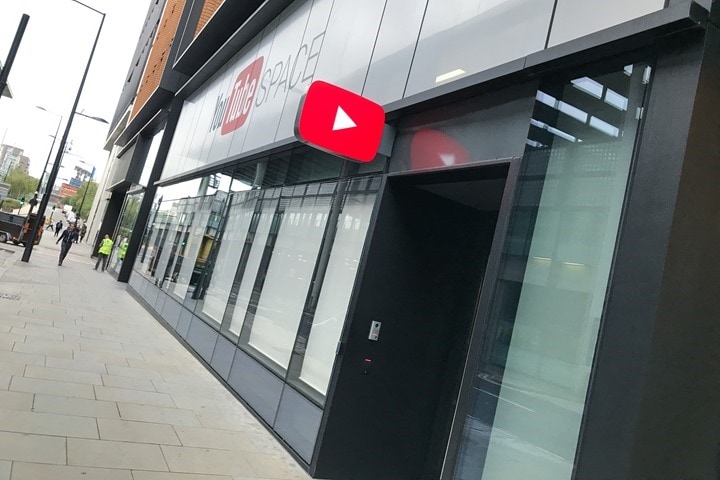 Before I get into why exactly I was visiting YouTube, I figured I’d show you a little bit of the space.  See, YouTube has what are called ‘YouTube Spaces’ which are full blown studios and shooting spaces available to YouTubers that meet various subscriber thresholds.  In general, it’s 10,000 subscribers – but that varies a bit on the country.  There’s other perks and such at various levels above that.  But 10K is sorta the major hurdle.

These spaces are located around the world (a list here), but include major cities like Paris, London, New York, LA, and so on.  The size of the spaces varies quite a bit by office, but the main things they have are full shooting and editing spaces/suites, as well as a huge gear/inventory list that you can borrow for the day (or multiple days).  It’s like a playground and library mixed into one, for video peeps…without any charge. It’s all free.

In any case, while there is a YouTube space in Paris – only about 15 minutes away by train, I actually ended up taking the train to London instead.  Thankfully, the YouTube Space in London couldn’t be located in a better location for those taking the Eurostar train from France – the office is directly across the street. As in, I could throw a crumpet at it and hit it from the train station.

Now technically the building actually houses Google offices as well (of which YouTube is a part of).  And within that, there’s the official ‘YouTube Space’, as well as general YouTube offices for YouTube employees.  The space part is the one that’s directly accessible from the street, whereas the offices are up on the tall skyscraper of the building that sits atop it.

After a security guard confirms you’re on the list for the day, you’re let inside and are able to pick up your badge. 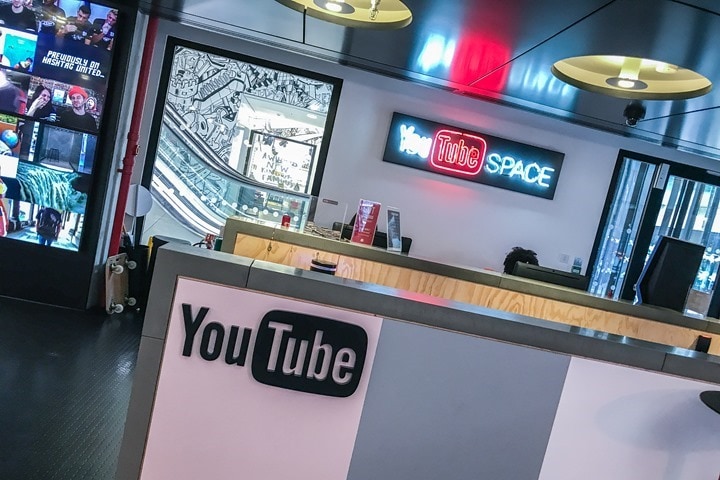 Inside, the interior is a blend of trendy startup meets movie set.  The open portion of the space is divided up into various ‘sets’, which are frequently changed up.  In theory, these sets would be used for filming projects, though I can’t imagine there’s that many YouTubers that would have a need for a London Taxi cab or a diner.  Still, these areas make for good gathering spaces for events. 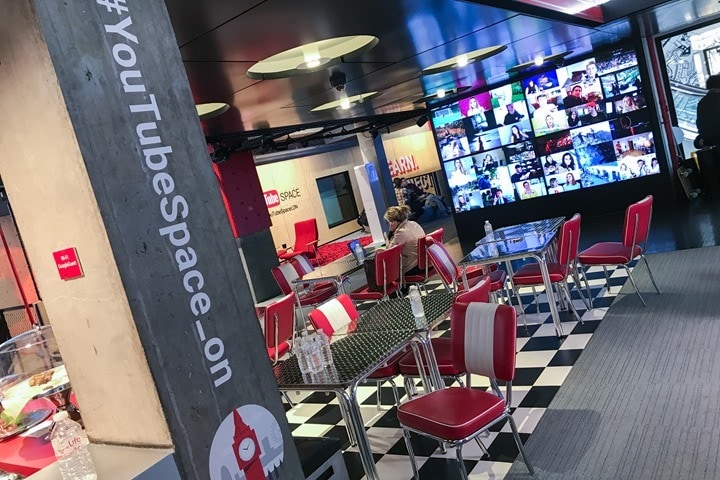 Instead, it’s the larger sound stages that are of more use to folks.  I believe there were three of these, some bigger than others. 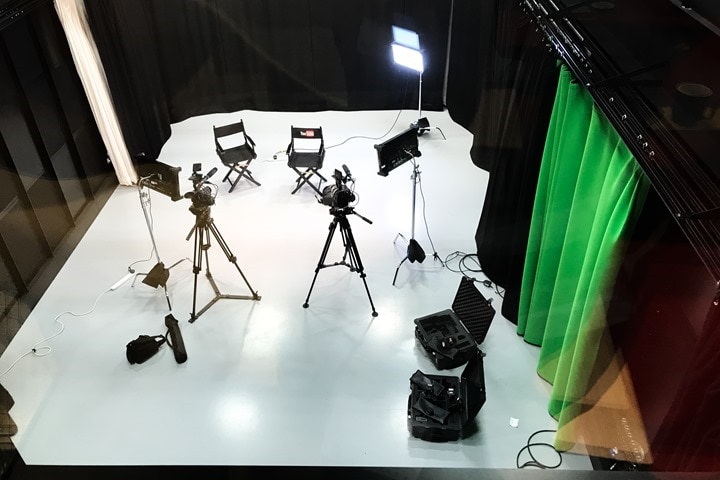 In addition, there are editing bays/rooms for folks to head into.  Sorry, I ended up just using a cell-phone for all my photos. 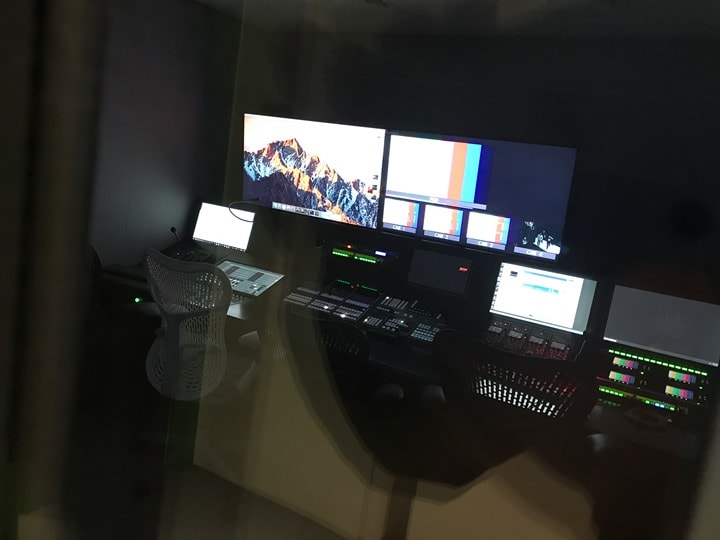 Plus, just a lot of general meeting space and spots to take fun photos in front of. 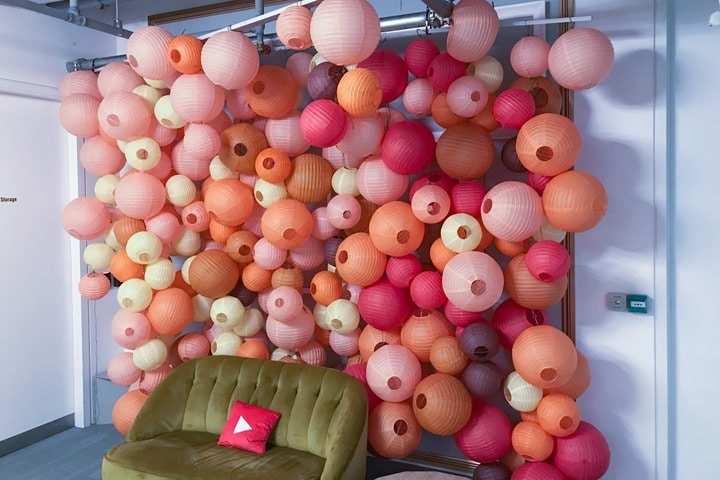 Oh, and then there’s the YouTube Creator Store. This is actually also accessible directly from the street without any appointment needed (like a normal shop). 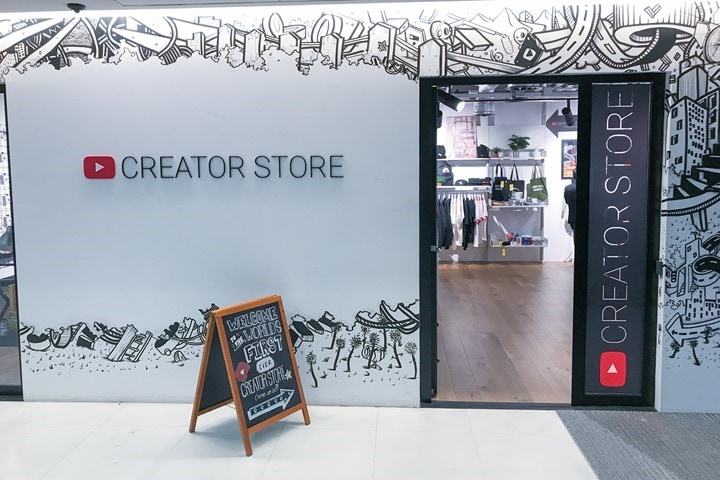 This has all the YouTube branded stuff you can imagine, plus various products from mostly local YouTubers.  Books and such.

The space isn’t massive, but seems pretty functional. I think for many YouTubers visiting it, it’s more of a convenient meeting spot to use, as well as a great place to rent gear. Speaking of which, this is a gear blog, right? 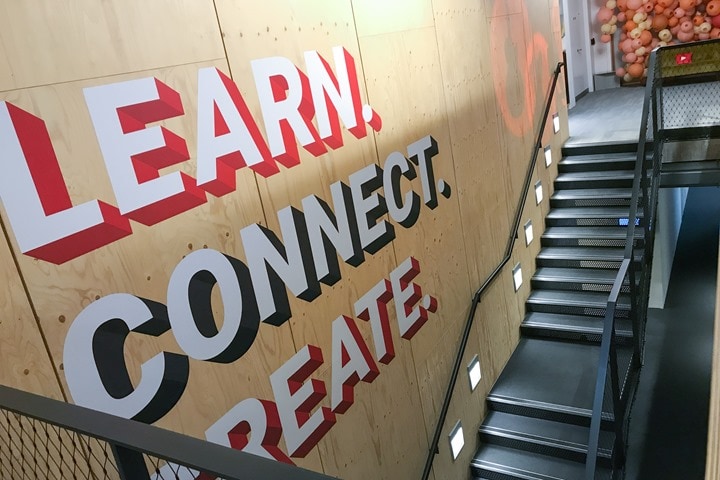 Actually, it’s more than $50K.  Technically the $49,500 for the RED EPIC-W only gets you the center sensor portion, called the ‘Brain’. That doesn’t include things like storage, lenses, cables, or even a handle.  But let’s not get ahead of ourselves.

As I mentioned above, one of the things the YouTube Space has is classes.  Usually a fair number of them.  They can be anything from courses on sound design to lighting, or aspects of how to use editing apps like Final Cut Pro or Premier. Same goes for more detailed elements like color correction of 360° shooting.  All of which are free to those that meet the threshold.

I was trying to find a good calendar for March from one of the YouTube Spaces, but it seems like nobody has really loaded much in yet (I find in general they tend to load stuff kinda late).  So instead, here’s the various levels within YouTube (well, the public levels anyway). 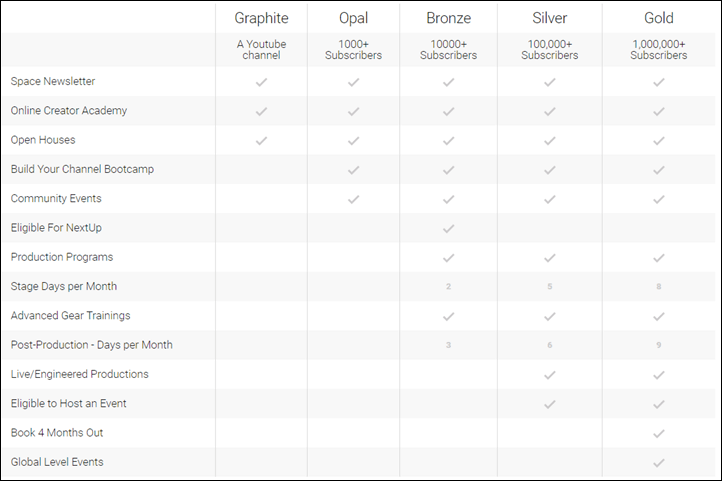 So in my case, I was looking at doing some Final Cut Pro classes (which is what I use for editing), or perhaps some classes on color correction (the bane of my existence in video).  But for the timeframe I was looking at, neither were offered on the dates that fit my schedule.  So instead I decided to go completely out of left field and go with a full day workshop on the RED cameras.  This would include everything from shooting to editing and plenty more.  Oh, and it included lunch.  And again, all free.

For those not familiar, RED cameras are both incredibly powerful and incredibly expensive.  As this section header alluded to, the camera seen below is a $49,500 base brain.  But once you add everything in you’re looking at closer to $70K (USD).  Of course, you don’t have to spend that much.  Apple has packages at ‘only’ $14,500.  But that only shoots 4K (versus the 8K the cameras I was using shot).

None of which really matter in the grand scheme of things for one core reason:

The Girl would shoot me if I bought one.

Mostly because that’d require trading the kids’ college funds for a camera.  Actually, she’d probably sign me up for a duathlon relay unknowingly, make me swim the swim leg…and then shoot me.

So why bother to learn this gear if I’m not going to buy one anytime soon?

Because I can rent it for free.

See, as part of the YouTube space program I can use the RED cameras either there or any YouTube office…including Paris.  You just have to complete the training first, thus, here I was. 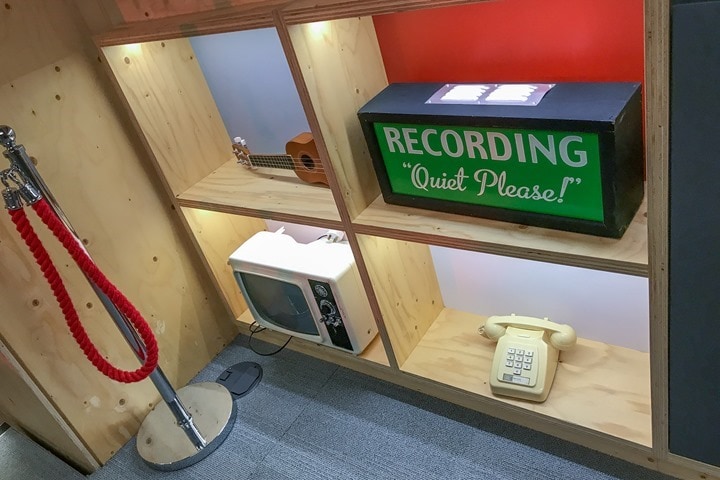 The class was presented by RED folks, and some YouTube folks were there as well for various tidbits.  The students weren’t probably what you’d envision as a ‘YouTuber’.  Generally speaking there wasn’t some pop-celebrity teen heartthrob there (ok, maybe one).  Most though were film guys and gals working in the industry that did YouTube stuff on the side.  Everyone in the room (even heartthrob) noted at the beginning of the class that they were largely there to learn the gear and see if it fit their production workflows. 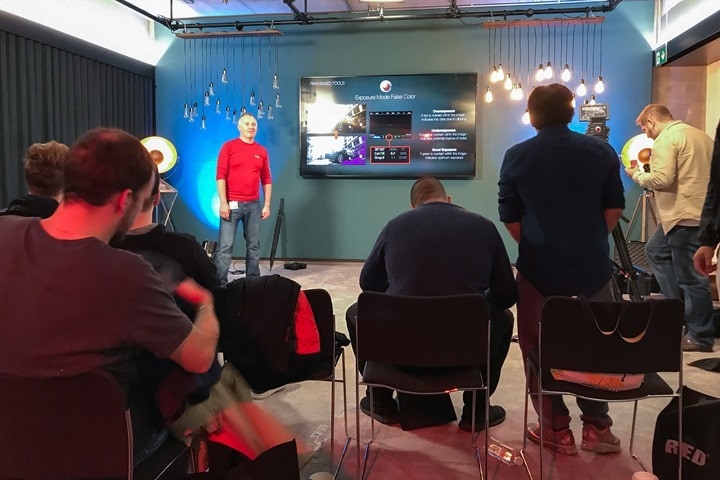 The structure included a bunch of presentation stuff followed by hands-on time with various tasks to complete. 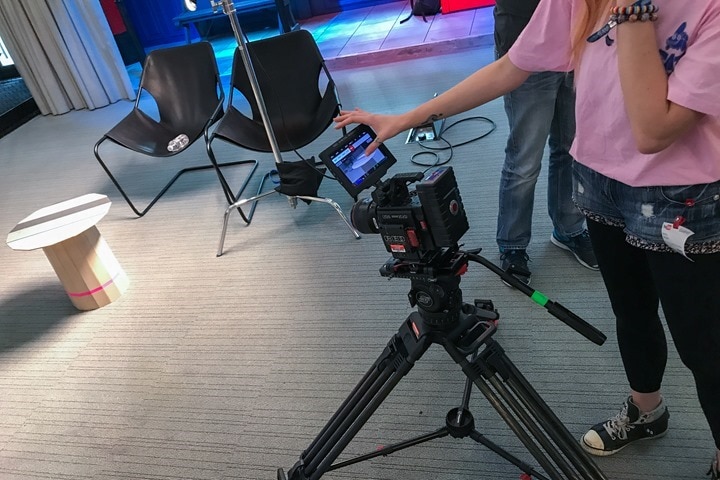 In my case, I played around with a few watches I had on-hand. 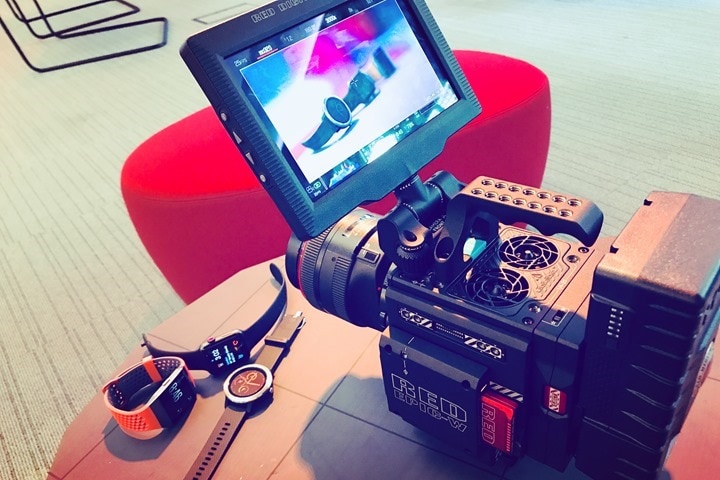 Also, I’d be totally remiss if I didn’t mention briefly the incredible cafeteria they have on a rooftop deck.  It’s for all Google employees, so we were just guests there that day.  All you can eat…all free!

And while it was an overcast day, here’s the view: 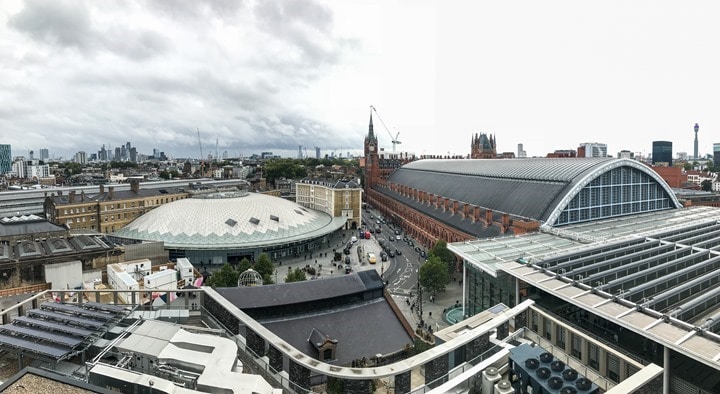 As for the class itself, it was really well put on. I’d definitely travel again for certain classes. The cost of Eurostar tickets when you buy them ahead of time is low enough that it’s far cheaper than an equally detailed class nearby.  But more importantly, being able to access the gear now is invaluable. 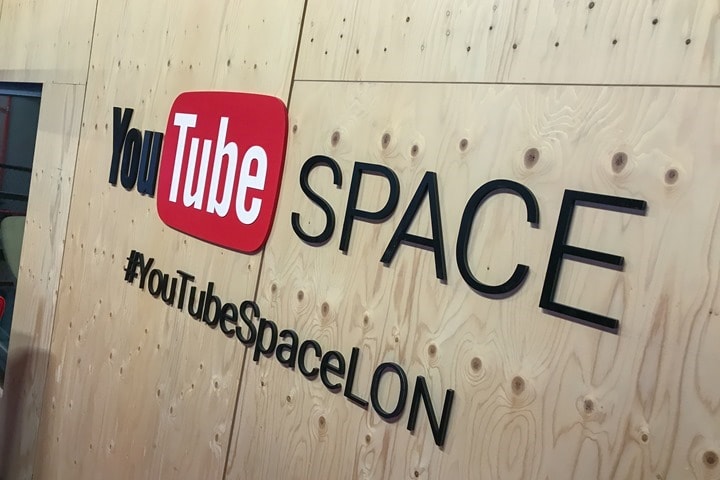 Of course, I’m well aware that simply filming with a $70,000+ camera isn’t going to make a given YouTube video anymore popular than any other.  It’ll help, sure, but ultimately there are countless people filming on cheap cell phones with millions of views.  And even myself I’ve almost found that the less time I spend on a video the more popular it is, GoPro and drone videos aside (where you legit have to do more work to have them popular).

Which gets to the next interesting tidbit: My blog and YouTube audiences are quite different. Certainly plenty of overlap, but once again being down in Australia has re-iterated this again (which I started realizing last year): There’s a lot of people on YouTube that follow me that have no idea I write here.  And inversely there’s a lot of people here that have no idea I have a YouTube channel. 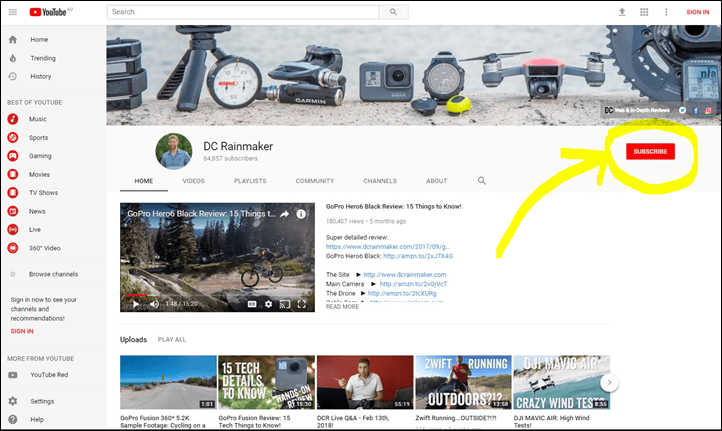 Further, while action camera and drone content does ok here on the blog, it’s my most popular content on YouTube.  Inversely, some smaller niche-like watches and bike computers (such as my COROS post from last week) that randomly do well here don’t do as well on YouTube.

Of course, I’m also keenly aware that the time I put into YouTube drives that. On average I post about one video a week there, sometimes super high quality, sometimes not.  Almost always in support of a post/piece here.  That’s largely because from a revenue standpoint YouTube is trivial. Most videos I produce only gather tens of dollars. This immensely detailed and complex video I did last week took me an entire day to produce has only made $8.21. That’s normal.

Which isn’t to say it’s not worth it – there are videos that do exceedingly well, almost exclusively based on timing (a video shot on launch day).  But with my model of not doing sponsored videos/posts, it doesn’t generally have a very good ROI.

But that’s OK, because I actually find video editing and the process of it to be fun and interesting.  So hopefully my videos will keep getting better (or at least not worse), and maybe I’ll even start publishing more of them (I probably only publish about 20% of the videos that I fully shot).

In the meantime – enjoy your weekend.

I can at least promise I’ve got some incredibly cool stuff coming up next week. Assuming the FedEx plane the device is on doesn’t go all Wilson on some remote Southern Pacific island.  Should be here Tuesday, video up Wednesday. Probably the most excited I’ve been for a gadget in a long while.