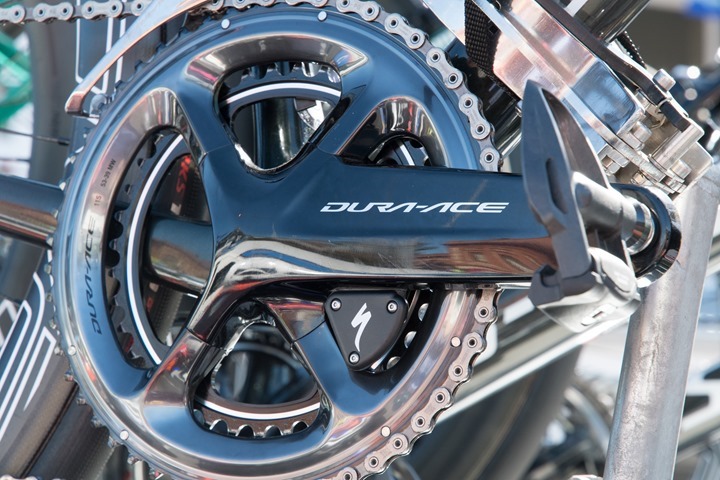 At the 2018 Tour Down Under, there honestly isn’t a ton of new bike tech.  At least, bike tech within the realm that I care about. Undoubtedly there are new frames, wheels, and probably the odd brake pad.  But in terms of things with electronics in them, most of that will have to wait till later this spring.  January has never been a popular time for bike electronics, and that’s certainly mostly the case here this week.

Except one little thing.

Or actually, potentially a larger thing.

Spotted down here in Adelaide this week is a new power meter with Specialized branding on it – as seen above.  Except, unless you were paying close attention, you might not have noticed there’s actually a few variants of this spread across two different teams.  Pro team BORA-hansgrohe is running 100% of this new thingamajig, while Quick-Step is running a blend of the new thing alongside 4iiii Precision units.

But first, what happens if we simply ask Specialized about these newfound gizmos?  What might they say?  I asked, here’s exactly what they said:

“Specialized relies on feedback from professional athletes in developing and testing advanced pre-production products in real-world applications. Thanks to this top-level feedback some of these products, or elements of their designs, eventually show up in future retail product offerings. We call this Project Black.

So on one hand that confirms that it’s indeed a Specialized product (which was somewhat a given, since it has a Specialized logo on it).  But within the pro cycling scene there are plenty of cases where mere logos are appended to things for team branding purposes.  So since the above statement confirms an actual product, that confirms it’s something Specialized is cooking on.

Thus, let’s take a look at dissecting it as best as possible using the photos I shot yesterday and today at the Tour Down Under.  First, we’ll start on the drive side (that’s the side with the chainrings): 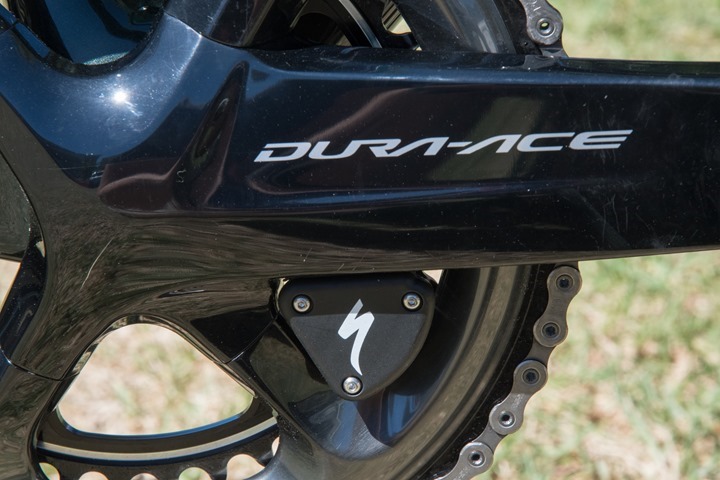 What you see here is identical to that of the 4iiii Precision design for a Dura Ace 9100 crankset.  4iiii announced those units back at Interbike in September, but weren’t going to start shipping till Q1 2018…which…would be now.

For some reason I can’t find any of my pics of the R9100 with the 4iiii pod on it, but here’s the previous gen from my review last winter, as you can see, it’s identical: 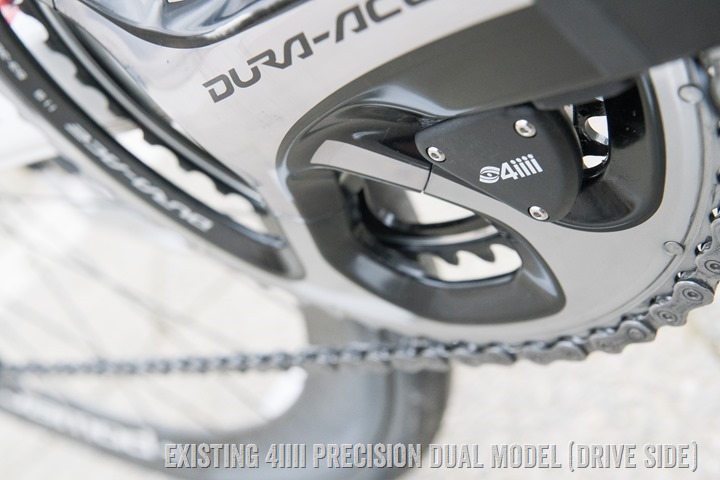 Thus, so far the drive side looks the same, but let’s swing to the non-drive side (left side), and take a look at that: 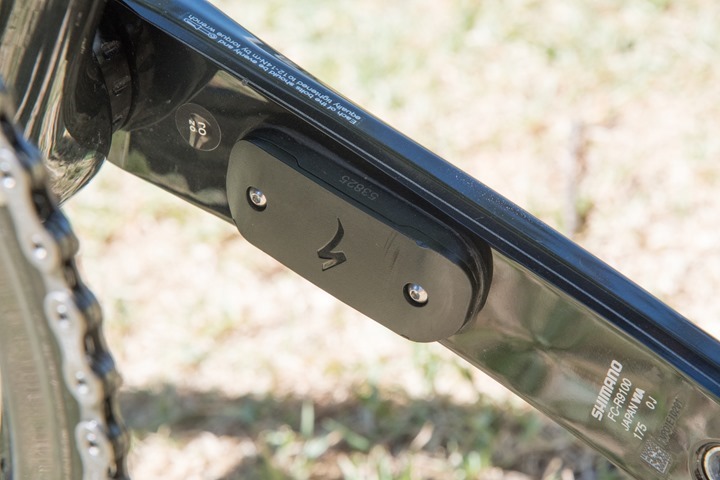 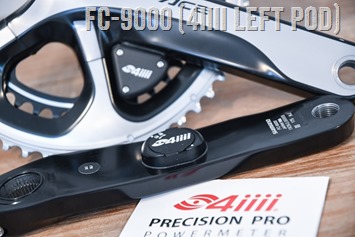 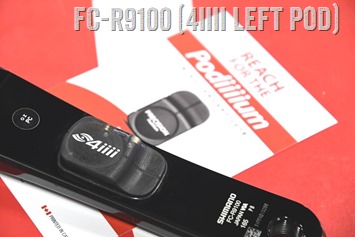 As you can see, both of those pods are rather plump and rounded.  Compared to the Specialized pod which is much longer, flatter, and a bit thinner looking (I didn’t exactly bring fancy measurement instruments with me though).  Even though 4iiii’s new R91000 pod tapers out, it’s still nowhere near the size/design of the Specialized R9100 pod. 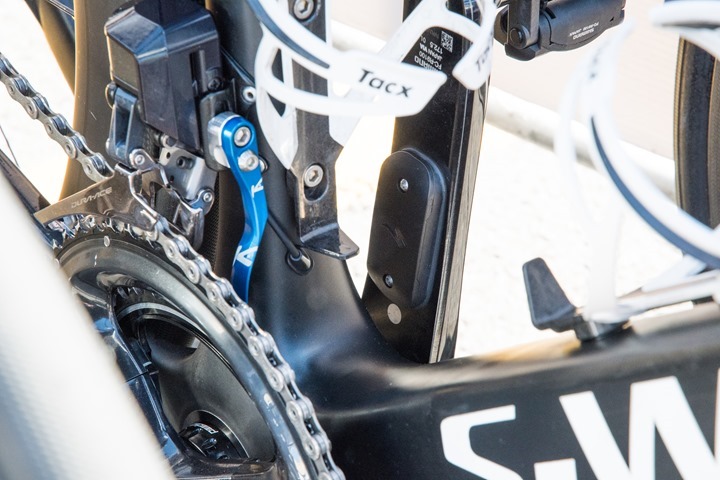 The next thing that’s notable is a shift in how batteries appear to be accessed.  With the existing 4iiii pods, you have a simple battery door that you open just using your finger.  This is roughly akin to what you find on many coin cell battery compartments in other sports tech products today, including footpods and other power meters like Stages.

However, with Specialized you see it has two screws that would require a hex wrench. 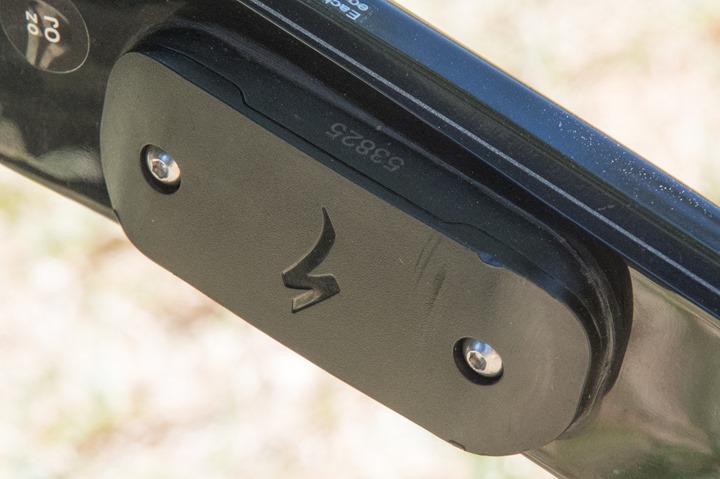 Why might a company shift to this design versus the more easily opened design?

For example, with the existing finger-opening-accessibility of the Stages Gen1 design, they had lots of issues with water ingress.  4iiii didn’t have as many instances of that to my knowledge, but 4iiii also shipped a fraction of the units of Stages power meters.  In Stages Gen2 units, they redesigned the battery door a bit which reduced water ingress issues, but still kept the finger-licking good battery door opener.

With the Specialized design though, it appears they’re going for the ‘not in our house’ approach to water.  Given that the battery life of most coin cell units in this market are in the 200-300 hour range, having to use a hex wrench to access the batteries isn’t too much of a hardship.

Now, before we wrap-up, it actually gets a little bit more interesting.  If you look closely at the Quick-Step and Bora bikes, you’ll see not one, not two, not three, but four variants of units onboard.  They’ve got:

Holy macaroni!  the remainder of the team is mostly on variant ‘D’ above. Here, let me show the differences:

The first one, variant A, is interesting because that’s actually a regression from last year where they were all on dual setups to my knowledge.  So not entirely sure what’s going on there.  Variant B above is a clear-cut dual from 4iiii, so that’s basically a hold-over from last year.  Variant C is a blend of a 4iiii-styled left-pod with a Specialized branded drive-side pod.  And Variant D is Specialized on both sides.

When I was taking team bike photos, the mechanic had started to give me Variant C, and then a few seconds later glanced down and realized I had what he described as an older design, and swapped it to Variant D – the flatter one.  So clearly it’s something Specialized has been testing for a while, or at least long enough to have various iterations with their pro teams.

All of which begs the question of when we might get more public details on this.  After all, a Specialized power meter has been rumored since last summer and various tidbits have snuck out here and there since then – usually to be quickly retracted.  At this point, it’s clear that Specialized is probably liking the free media attention they’re getting on a semi-secret looking product.

My best guess is that we’d see some sort of announcement by or at Sea Otter (mid-April).  That’s usually the next stop on the cycling product train schedule, with a handful of products also announced just ahead of Sea Otter (thus March) to build a bit of momentum and awareness going into Sea Otter.  Hard to know here, but no doubt whenever it’s announced I’ll be there to dig into it in far more detail than my stalker shots here in Adelaide.

With that, I’m hitting the publish button – time to get out on the bike today and…test some power meters.  Thanks for reading!