With the VIRB 360 though, the camera stitched two 4K video sources together (Side note: in video math, 2x4K does NOT equal 8K, but rather 5.7K.  I explain it in the review here).  The process of pulling those files together into a single file is called ‘stitching’.  How well a company does that will drive whether or not you think 360° video is worth your time.  Bad stitching manifests itself in many ways, from lopsided lighting to visible seams.

Anyway – back at launch, Garmin only supported in-camera stitching at 4K resolution (not the 5.7K the unit was capable of).  If you wanted higher resolutions you had to manually stitch the two 4k files together using 3rd party apps.  Those apps were either incredibly expensive, or complex to use (or if easy to use they were limited to 4K anyway).  Until now.

Now you can use Garmin’s own free VIRB Edit app to not only stitch everything together at 5.7K resolution – but also overlay metrics like speed, g-forces, heart rate, and many more.  Further, with the new HyperFrame functionality, you can take a 360° video and export a flat 1080p video angle from it, allowing you to get traditional 1080p footage but with all the angles of a 360° video.

First up is the new 5.7K stitching mode.  In order to get this to work you’ll need to ensure that you’re both recording in RAW mode on the camera AND have set the RAW mode to 5.7K.  By default if you record to RAW mode it won’t be at 5.7K.  You have to do this on the mobile app, as for some odd reason the camera itself doesn’t allow you to select this resolution. 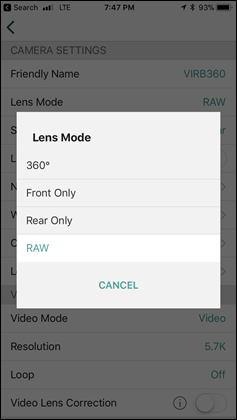 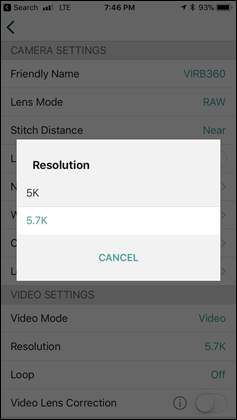 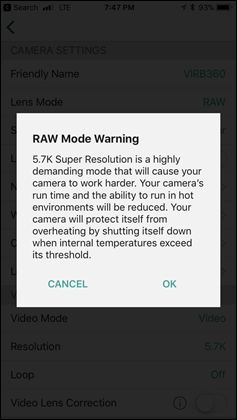 Once that’s done, you’ll basically record as normal.  This means connecting any sensors or data you want, like heart rate or power, or automotive data if that’s your thing.  Again, totally normal here.  Just go off and ride: 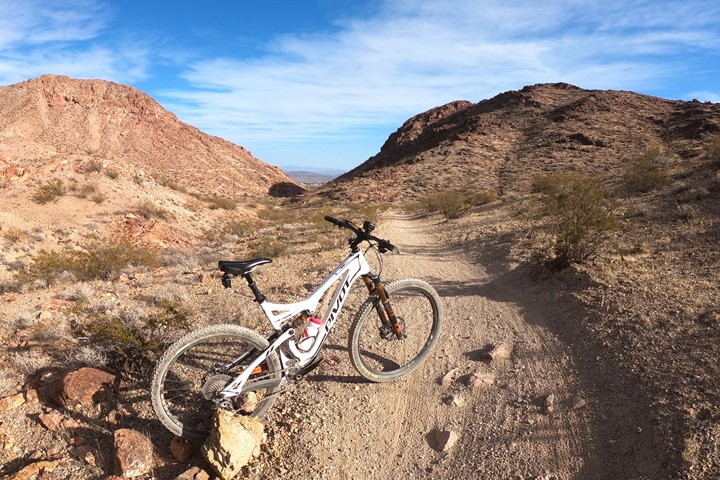 Once that’s done you’ll plug your camera into your computer with VIRB Edit.  In this case RAW file support does need a computer and not your phone, because the processing overhead is just so high.  That’s why they can’t do the stitching in camera, as it’s simply too much of a drain.  Once plugged in you’ll see the files within VIRB Edit with a funky icon.  This icon means it’s automatically finding the two sets of files and considers them one.  On a Mac the UI is slightly different but it automatically finds the pairs as well. 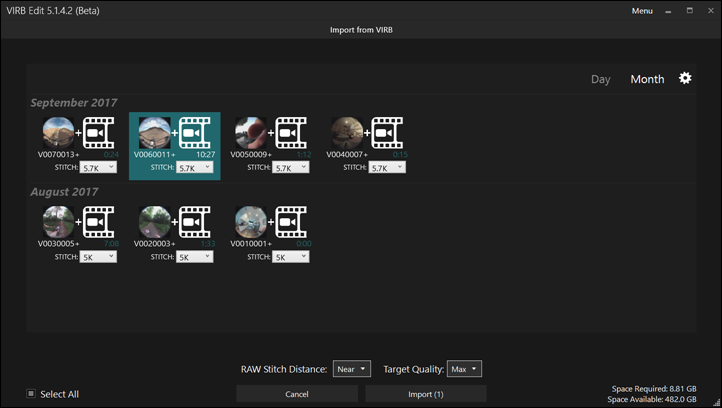 After clicking import it’ll ask to name the set as normal, and then it sets off on its stitching adventure. 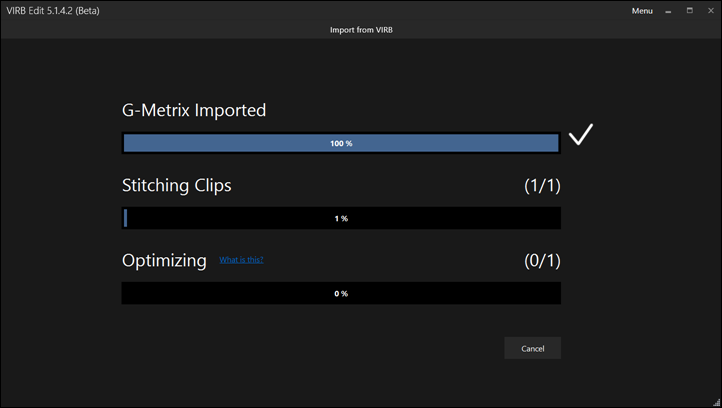 It’s at this juncture that you can go off and have a long dinner (depending on how much footage you’ve got).  It’s gonna be a while.  I will note on my 2016 MacBook Pro it was far faster than my 2017 Lenovo T470s (like, hours faster).  However, as of today, September 21st, 2017 you can’t yet process to 5K/5.7K on the Mac.  That’s because Garmin is waiting for MacOS High Sierra, which is slated to release to the public any day now.  That OS supports the higher resolution 5K/5.7K files.  Garmin says that as soon as Apple publicly ships that, they’ll probably need a couple of weeks to validate everything and then will release a Mac VIRB Edit update with 5.7K export capabilities.  Still, you can certainly capture RAW stuff today in preparation for that.

A while later, you’ll return to the clips stitched: 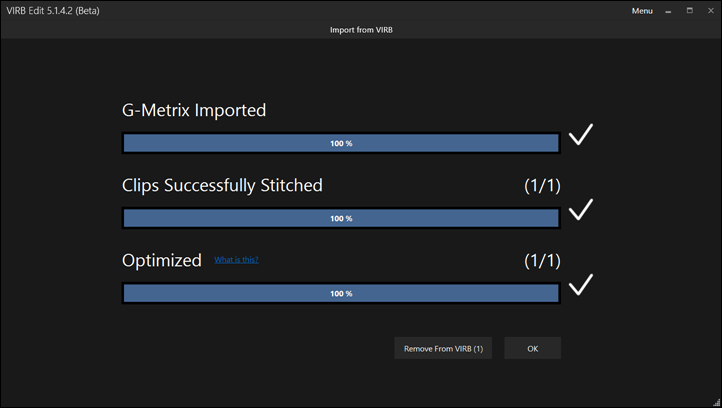 At this point, you can do all the normal editing you’d do within VIRB Edit.  So things like data overlays, music, etc… That’s all the same basically.  Note the 5.7K resolution in the lower right-hand corner.  Also, note the overlay in the middle of the screen. 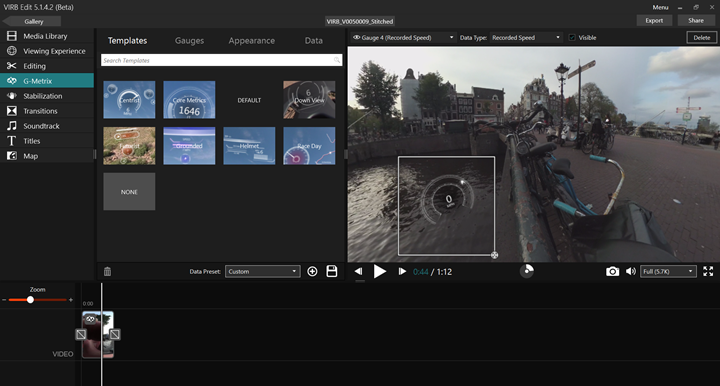 And then from there you can export off the file for upload to various services.  Note that too will take some time. 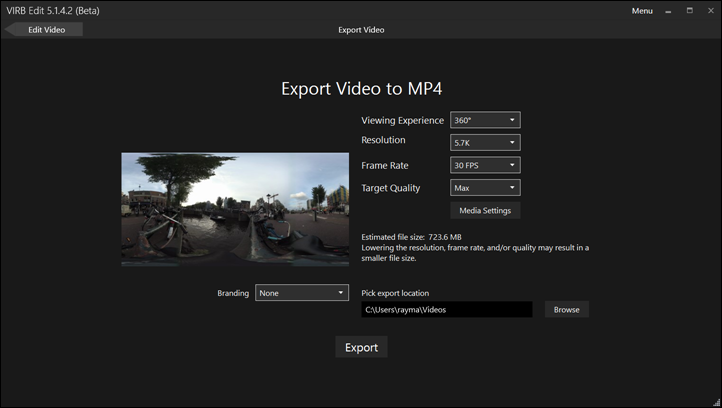 Once uploaded to a supported platform (e.g. YouTube), you’ll see the 5K icon in the lower right corner – indicating your achievement as a high resolution film maker: 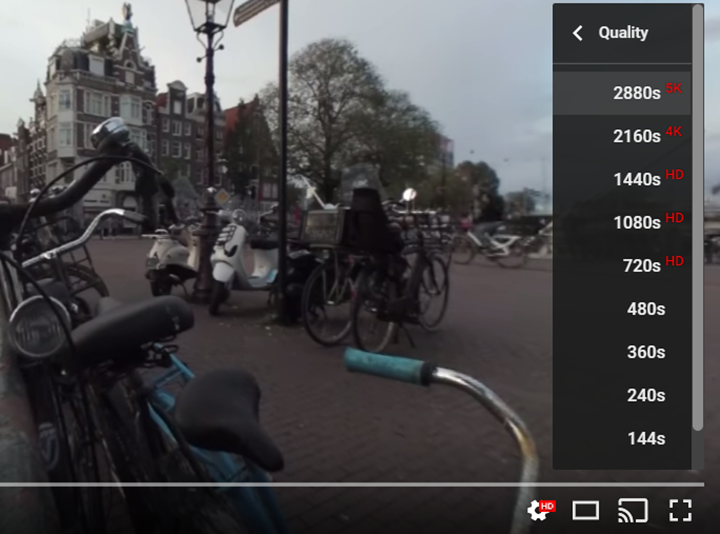 Of course…whether or not your computer or device can actually playback that resolution…that’s a totally different problem entirely.  But hey…gotta start somewhere, right?

Here’s some sample 5.7K footage at night I shot this evening:

As well as this past weekend in Amsterdam:

Nothing super exciting, but just shows it works.

Next up we’ve got HyperFrame director mode.  This mode allows you to take the 360° footage you filmed, and pull out specific 1080p flat video views.  Thus getting you the ‘director’ mode concept.  Pretend you have a camera on your handlebars and you want to force the view facing forward for a bit, and then pan back to look at your face, then turn to the side to watch a dancing bear go by.  You can do that – ultimately exporting out a standard 1080p video (non-360°).

You’ll remember GoPro discussed this concept (which they call ‘Overcapture’), back upon the announcement of their Fusion 360° action camera this past spring.  But that camera isn’t due to start being available till later this year, and ultimately will have slightly lower resolution (5.2K vs 5.7K).  Of course, we don’t know what quality will be like – so it could either surpass Garmin’s image quality (or not).  Still too soon.

In any case, Garmin’s mode is all about changing perspectives from that 360° footage.  Let’s crack open some mountain biking footage from yesterday I’ve got as a starting point.  To start I’ll import all the footage as normal, and then click the button that says ‘Viewing Experience’.  This then gives you the default 360° view, as well as the new HyperFrame view. 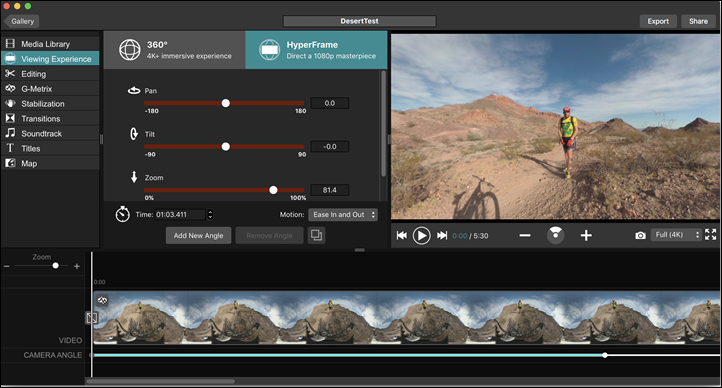 Below that you’ll notice a bunch of options for pan, tilt, and zoom.  Then further down the ability to add a new angle, as well as the motion within that angle.  In my case, after I finished talking, I’m going to change the angle as I walk to the bike.  So I’ll tap ‘Add New Angle’ at that point. 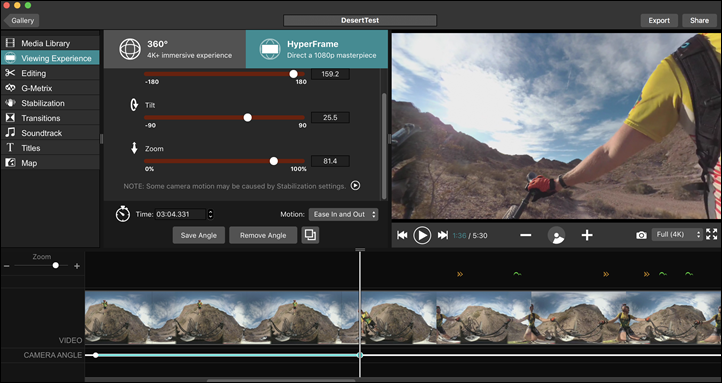 As part of that, the camera will automatically pan between these two angles.  Or I can have it ease in or out of these.

The same goes for zooming in and out and tilting.  For example, I can go all the way to a tiny-world style image: 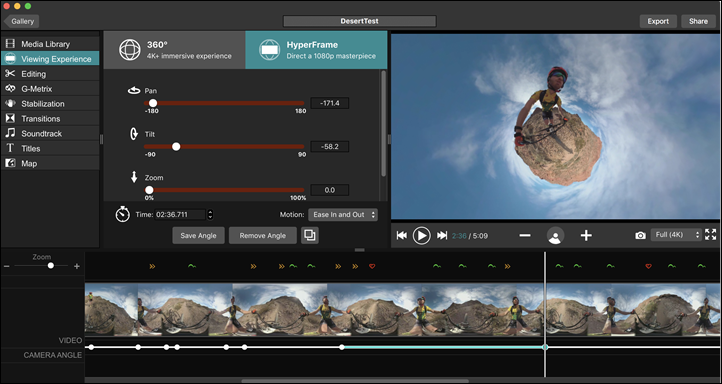 And then I can change the zooming and framing and rip it around to the front again: 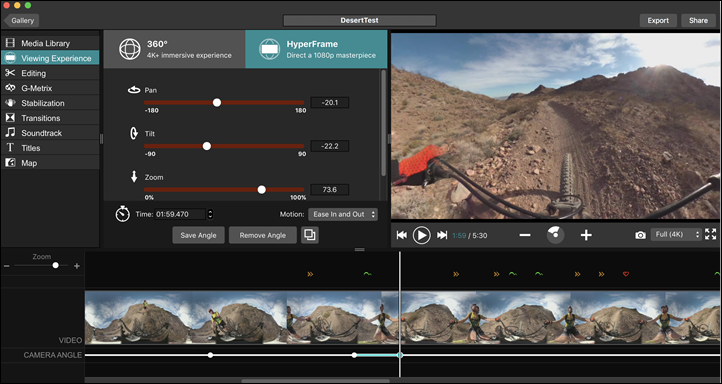 And I can continue tweaking things the entire time.  You’ll notice below the video there’s a line with a bunch of dots.  Each one of those dots is a new camera angle.  Once done, you’ll export out a simple 1080p clip, no 360° footage included. 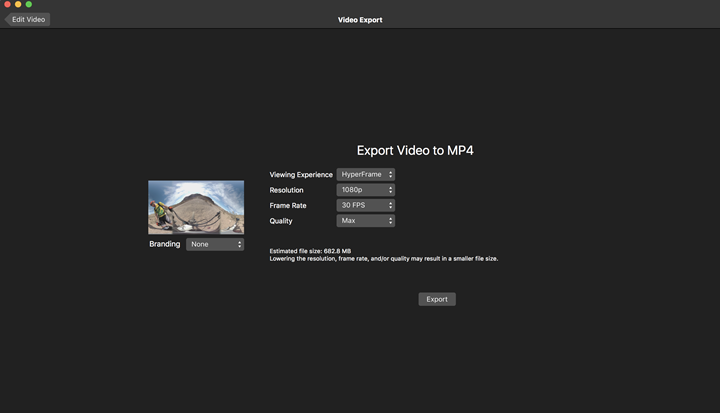 If you had lots of time and had properly placed the camera (unlike me on this mountain bike), you really can do some pretty cool stuff with this.

Speaking of ‘could do’, I present you with ‘didn’t do’, my short little video clip below that lacks a lot of cool.  But, it shows how it works.

Again – tons of potential here for those that have both creativity and a bit of time.  Especially once you start looking at different shots merged together.  Though, as with previous, I will say the VIRB Edit suite still leaves a bit to be desired for things like being able to place music at places other than the start, as well as just being able to super quickly snip through video (lack of a waveform being one).

Still – we know that there’s no software team within Garmin that’s as focused on adding new features as the VIRB Edit group.  Anyone who has followed the history of VIRB Edit over the years knows that – it’s incredible how much new stuff keeps getting added into the free app (be it for the 360° cameras or the regular ones).  So I suspect it’s on the to-do list.

In any case – definitely cool stuff.  Oh…one more thing.  As part of all this VIRB 360 stuffs, Garmin also added some additional features to the firmware today. They are:

The night shot ones are accessible via the VIRB Edit mobile app.