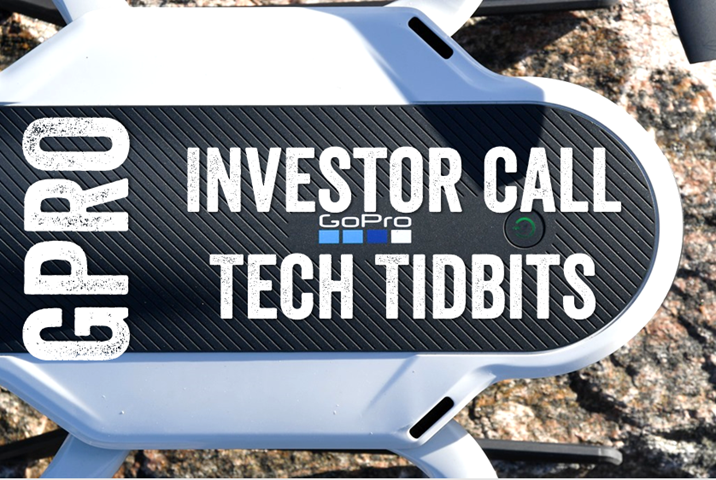 As I noted yesterday, when I’m sufficiently bored, I listen to investor calls for companies in the segment.  The last call I’ll likely be joining anytime soon was GoPro’s earnings call.  I was interested to see what they might have to say about the upcoming Hero 6, the GoPro Fusion 360° camera, and their Karma drone.

Now of course, not every company in this segment does investor calls or similar reports.  It’s mostly just the biggies that are publically traded entities.  So no reports or calls from Wahoo, PowerTap or countless others.  But there are ones from GoPro, Fitbit, Garmin, and Apple.  Now I’m not going to talk deep financials here.  Meaning, stuff like operating growth, gross margins and blah-blah-blah, I mostly don’t care about.  Instead, it’s largely the non-financial tidbits I’m interested in.

Note that I won’t do these for every quarter or every company.  Just cases where I think there are enough worthwhile things to post about.  Sort of an extended version of what I sometimes include in the ‘Week in Review’ posts.  This is one of these cases. 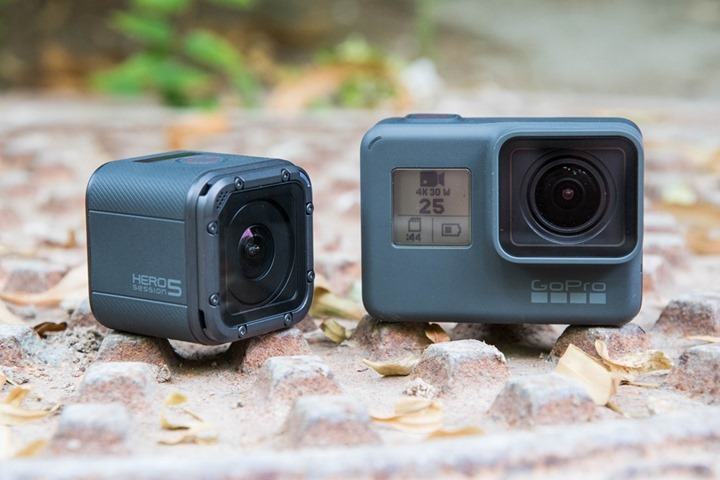 GoPro got right into things, noting 34% year over year increases in revenues, driven heavily by the Hero 5 lineup, in particular the Hero 5 Black.

The Hero 5 Black held the #1 spot for digital image cameras for the 3rd consecutive quarter (keep in mind, this was the quarter ending June 30th, so basically they’ve held it since launch last fall – well done).  They also noted that since 2009, GoPro has now sold some 20 million cameras, starting with the HD Hero.

They talked a bit about their decision to experiment with different retail promotions, such as a Hero 5 Black sale they did for two weeks in June, which resulted in a 66% increase in average weekly sales.  The company stressed that “these shouldn’t be confused with softness in demand”.  All of us can only hope for more experiments.

And no doubt, there were plenty of cameras sold in Q2:

This is a really important point not to miss: It argues against the theory that people are buying endless numbers of cheaper GoPro cameras instead of higher end ones. When in reality people are actually buying the highest end offering GoPro has for consumers.

Even more interesting was that GoPro noted twice that the company is selling more Hero 5 units than Hero 4’s did, relative to their launch timeframes:

“Hero 5 cameras continue to outsell Hero 4 cameras on comparable launch periods [on a per unit basis].”

“Demand for GoPro was high on Amazon Prime Day (July 11). A HERO Session bundle sold more than ten-times the weekly run-rate; HERO5 Black was offered with no discount and moved the equivalent of a full week of normal sell-thru in just one day.”

You may remember that the Hero Session bundle went for $149, versus $200.  I can attest that a crapton of cameras were bought by you using the Amazon links here.  Thanks!  The second part that I bolded was even more interesting.  Just sit and read that a few times over: There was no discount, yet they sold 7 times the number of cameras. Mind-boggling.

GoPro also noted their heavy focus on social media platforms.  They were the only company in the last few days that outlined their various Instagram and YouTube numbers and metrics, in the same way they did their financial numbers.

“On social, we continue to expand our community, we gained 1.6 million new followers in Q2.  Instagram followers were up 39% year over year to 13.7 million, with a 94% increase in international followers.”

For example, they talked about how they decided to produce fewer videos on YouTube, but to make those videos of higher quality:

“In the spirit of doing fewer things better, we’re also producing significantly fewer, yet higher impact videos.  A combination of user generated content and our own in-house productions.  The result is that the first half of 2017 the median number of organic YouTube views is up 65%, and Facebook views are almost 60% [year over year for both].”

And I’d agree that I’m more likely these days to click on a GoPro video since they’ve seemingly increased in production quality and of a higher variety of topics that are interesting to a broader range of consumers.  They’re just cool videos to watch, even if I know nothing about the topic.

Finally, as a random aside, GoPro currently employees 1,247 people, which is down 20% from the same timeframe a year prior. 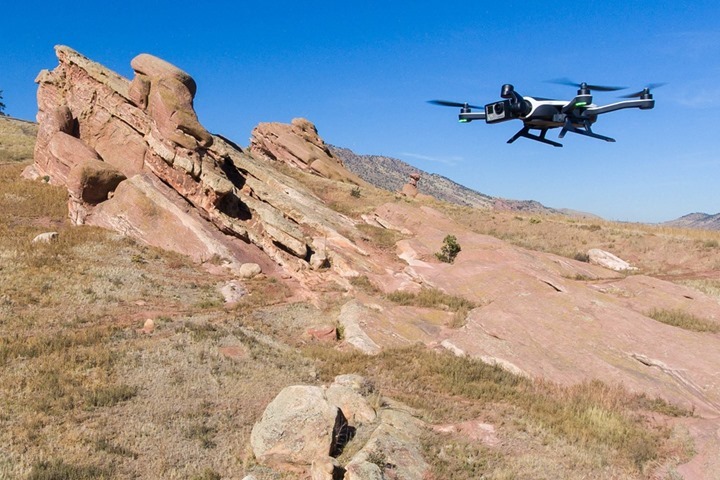 GoPro Karma was mentioned a number of times.  Almost all of them were them talking about how they were the #2 drone brand in the US:

“GoPro’s drone, Karma, was the #2 selling drone brand in the U.S. in the second quarter, according to the NPD Group’s Retail Tracking Service.”

Of course, this is like getting on the on the podium at a race when there are only three people in your age group.  #1 is of course DJI, with a slew of products available at major retailers and direct to consumers alike (Mavic, Spark, Phantom series), plus higher end units.  #2 makes GoPro, and #3 is…let’s be honest, nobody cares, as nobody is buying them.

(To be fair, there are some good drones beyond DJI, but from a purely sales standpoint they aren’t really relevant here.  In the context of this conversation, it’s really about what drones you’ll find at Best Buy or on the top charts at Amazon.)

They did briefly touch on how they won a Red Dot award for the Karma drone, which is an award for design of a product, though not necessarily functionality (meaning more physical design than functional design).

Later in the call an analyst asked about whether Karma was a “10% contributor in Q2” to revenues, and GoPro unceremoniously confirmed it was not.  They did note they’ve made some slight improvement to margins on Karma, making it slightly more profitable, but they said the margins were still very low (something retailers also know – as their margins were also cut upon leading into the launch of Karma).

Oh, and then they repeated their claim about being the #2 drone brand in the US.  A few more times.

Later an analyst asked about Karma rollout into different countries and GoPro noted how it was more difficult for launching that product compared to a camera, hence why you see them rolling out so slowly to international markets compared to DJI.  They further talked about how the company has shifted to localizing much more of the user interface, voice controls, and so on, in recent years – which they’re attributing higher revenues to internationally.  Previously they didn’t bother to do this. 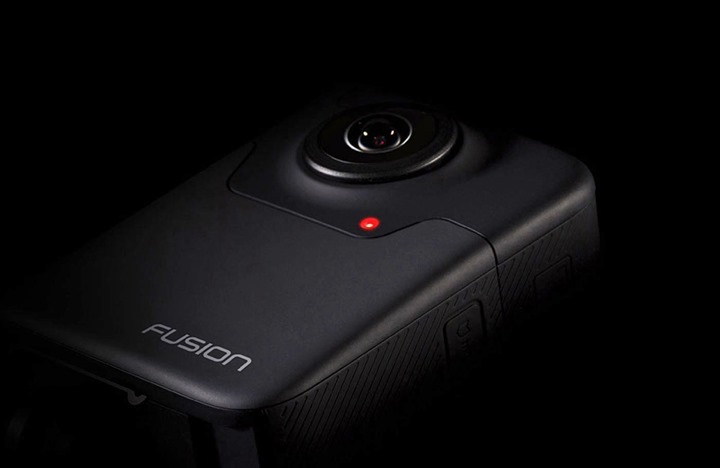 Earlier this year GoPro announced both plans for a Hero 6 product (or products, we don’t know yet), as well as their upcoming GoPro Fusion camera, which is a 360° 5.2K camera (I talk about that here).

Sometimes GoPro will drop hints about their cameras on these calls, as they’ve done so historically numerous times.  In fact, if you can count on anything in GoPro investor related calls – it’s usually GoPro dropping hints about future products.

In this case though, we got no further technical details about the Hero 6 lineup.  We did however get clarity on the timelines, which is slated for Q3 (between now and Sept 30th).  They didn’t talk about an exact date, however they expect that cameras will be announced in Q3, but not probably not be shipped until Q4 (they did this discussion in an incredibly financial-oriented way about where those revenues were realized).

This isn’t surprising, and matches to what GoPro has historically done almost every year in history – launching in mid-late September.  Likely announcing in the last week or two of September, and then making those cameras available in early October (which is considered Q4 – in line with their comments about not shipping till then).

For Fusion (the 360° camera), they briefly explained the concept to analysts and their currently underway pilot program with various content creators including the Golden State Warriors, USA Today, and Fox Sports.  Later an analyst asked what differentiator they felt Fusion had compared to the influx of 360° cameras (like Garmin’s VIRB 360 5.7K camera), and the company responded with some non-concrete fluffy stuff. But what was most interesting is that they continued on and explained they believed their most compelling differentiator is actually their brand:

“Another differentiator is our brand.  GoPro has proven it’s a category maker, and our customers look to us for products like Fusion.  The brand is built on enabling immersive experience sharing and Fusion takes that to the ultimate level with its ability to spherically capture everything around you and its ability to share that as a VR video or as traditional content that you’d punch-out from the Over Captured content.  And Karma is a great example of GoPro’s brand ability to introduce new products and to do well.  As we all know Karma had a challenged start, but since its launch it’s grown to become the #2 best selling drone in the United States $1,000 and up.  And that’s testament both to the product quality of the user experience of Karma, and as well to the strength of the brand and its ability to introduce new products. ”

And I don’t disagree there for the first part.  The GoPro brand is incredibly powerful, and it *will* drive sales, no matter how bad the product could be (and I have no reason to believe it’ll be bad, just making the point here).  However, to assume that the brand itself will carry the product is a dangerous assumption.  It’s how they got themselves into the whole Karma mess to begin with, which no matter how they spin it – still isn’t doing well.

Finally, one of the big things GoPro talked a lot about was managing inventory, which in most contexts was about ensuring there wasn’t too much inventory sitting around.  However, one analyst asked about this in relation to Q4 (the holiday period), and the answer was surprising:

“Our approach also ensures that we’ll exit 2017 with appropriate inventory levels, that set us up well for the start of the year.  And I want to be very clear that we are building specific inventory levels that to achieve low double-digit revenue growth and profitability.  And if there is demand that exceeds this, we won’t be able to realize it, but that’s OK.  This is how we ran GoPro for many years before going public.  It’s a very responsible approach that allows us to be more predictable and manage our growth, and as you noted importantly exit the year with appropriate inventory levels.”

I’ve bolded what I consider to be the most important part.  This roughly translates to: We’re being conservative with building new camera stock, and we may not have stock if it ends up being really popular.  On one hand, we don’t know what GoPro is actually stocking numbers-wise.  So they could be stocking plenty for any demand.  On the other hand, making this statement in the investor call is a bit of a red flag that stock of new models might be tight this year.

And in some ways, this matches their earlier statements around Fusion as well and the fact that only very few units would be available prior to the end of the year.  Though their comment here was clearly more about Hero 6 than Fusion.

With all that said, it looks like we’ll have to wait till September to get our first look at the Hero 6 and the specs there.  I don’t expect major enhancements there, but rather more of an incremental approach to the camera.  Further, since at no point did they mention a Karma drone refresh of any sort (or any new features), I wouldn’t expect anything there.  GoPro is usually pretty predictable with talking about new product generalizations, and since they didn’t for Karma – that’s telling.

With that – enjoy your evening (or…morning as it may again be here in Europe)!