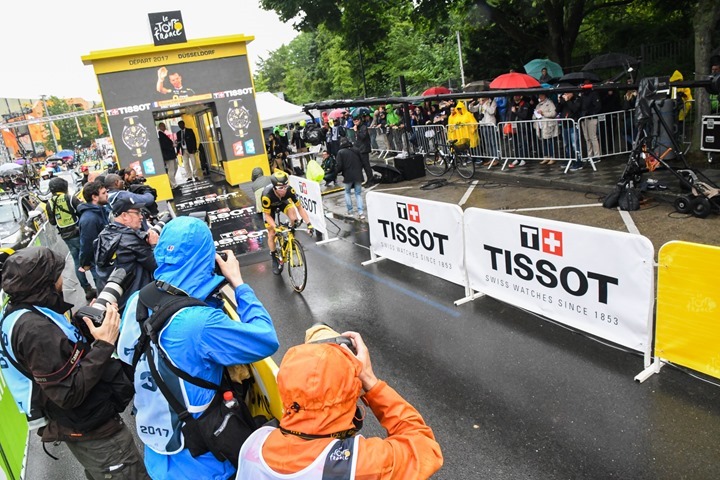 This weekend was a whirlwind of time spent at the opening two days of the Tour de France.  I took over 1,000 photos on the first day alone. About 100 of those ended up in my Tour de France 2017 Trainers, Power Meters, and Gadgets post.  The other 900 or so?  Well, they’re sitting here with me trying to decide what to do with them.  There are some really fantastic shots in there – mostly race/rider shots that I haven’t had time to edit yet.

As some of you saw, I tweeted a crapton those two days.  A photo/video about once every 15-20 minutes on average, throughout each day.  Virtually all of it behind the scenes goodness from the Tour.  Stuff you aren’t likely to find in mainstream media coverage.  Or basically, just things you’d stumble upon if someone gave you full access to go wherever you wanted.

But it occurred to me that a lot of readers (the majority) don’t actually follow along on Twitter.  So I decided to try something new here and collect all the tweets from that first day, add a few more thoughts around them, and stick them here.  That way if you don’t follow on Twitter (or if you were busy doing something productive like racing that day), you can re-live all the goodness here as well as ask any questions.

Let’s dive right into! This is all in chronological order from that day.

Not gonna lie – that was definitely the highlight of my first day.  It took months to get everything correctly done from a paperwork standpoint.  So…much…paperwork.  The ‘New Media’ designation is kinda funny.  Oddly, the newspapers don’t have an ‘Old Media’ designation.  I’m sure if they did that’d last about 2 minutes before everyone was just ‘Media’.

The security is definitely stepped up this year.  Though, some of that may simply be first stage type stuff.  Still the badges are scanned via RFID (presumably) anytime you enter a secure zone.  And that ignores all the police/etc at other points. Due to my flight up to Dusseldorf departing crazy early, I arrived crazy early.  And thus in doing so you get to see some interesting things – like these floor installers installing the floor at Team Quick-Step:

I had booked my hotel the night before. As in, like 7 hours before I arrived.  Oddly enough, the Hilton was increda-cheap.  These days I rarely book American hotels overseas as they tend to be overpriced.  In any event, it’s also where Team Sky and Direct Energie were staying.  This bike box was just chilling at the lobby next to the check-in desks.  Nobody was tending to it, just hanging out.

Meanwhile, Team Sky has an urgent overnight with Saturday morning service delivery waiting for it in the hotel lobby. pic.twitter.com/DNrU21xJcK

With a starting locale like the convention centers of Dusseldorf, it was easier to see just how sprawling and packed full of gear the Tour is from a travelling perspective.  Whereas in smaller towns the structure of the town acts as a filter, making it more difficult to find all these unique things.

In case you were wondering, there’s actually an entire truck that travels with the TdF that only has copy machines in it. #NotNewMedia pic.twitter.com/fgHoP0nq6Y — Ray Maker (@dcrainmakerblog) July 1, 2017

Later that day I actually saw the below truck all opened up.  I was tempted to ask for a quick tour, but was tight on time.  Maybe at another stage.

Yup, many team buses have mini washers and dryers below them. pic.twitter.com/BgEbFvNTXP — Ray Maker (@dcrainmakerblog) July 1, 2017

Part of my early-morning wanderings.  At this point there were very few (virtually no) fans around, so they probably felt pretty secure there.  Though, it’s unclear to me if there was actually anything in the boxes.

Personally I wouldn’t just leave $6,200 worth of my Tacx Neo’s lying around in the shrubbery. But to each their own. pic.twitter.com/7tNQzNb2FP

I had noticed them starting to fill the bottles on my way to the media center.  When I passed back through about an hour later, they were still working on filling the bottles.  Of course, it’s entirely possible they stopped and had a beer in between.  it is Germany after all, where I learned beer at 9AM is totally acceptable.

The process to fill/prepare all the Team Sky bottles for today appeared to take about an hour. Rubber gloves required apparently. pic.twitter.com/0oPDQNkq1h — Ray Maker (@dcrainmakerblog) July 1, 2017

Seriously – how awesome is this?  I saw other team trucks have similar arrangements, but usually horizontal.  Something about this vertical one just takes the cake.

It’s like those CD-R stack holders from back in the day…except for bike cassettes. pic.twitter.com/eqNw4AT2PE

Ahh yes, the Caravan.  If there’s one thing in the Tour that’s my favorite – it’s the massive caravan.  Check out my older post on the whole thing here.

It’s getting started – the TdF publicity caravan has begun its trek. The precede the race each day for the entire route. Free stuff abound. pic.twitter.com/ReMdIjDnVz — Ray Maker (@dcrainmakerblog) July 1, 2017

Meanwhile, racers out pre-riding the 14km TT course. Having to dodge giant tubes of glue, pillow trucks, and free Haribo canary in the air. pic.twitter.com/86cUIRa6Ji

Many hours before the race they started weighing, measuring, and scanning bikes.  Largely in case there was a problem teams could fix it with more than 5 minutes to spare.

But they also did it again for all spares on the team cars accompanying each rider, as well as all final bikes going to the start line.

If you look carefully, the furthest disc-wheel looking object is actually the speaker. Pretty crazy.

The jams be real in the Bora-Hansgrohe warm-up area. One of this disc wheels at the far end is actually a giant speaker. pic.twitter.com/jjgBhUIYEj

Watching the interaction throughout the weekend between the German and French police officers was pretty neat.  Obviously, since the race started in Germany there would have to be coordination, and most all perimeter security was handled by German police.  But on-course security was a blend.

Every rider today is accompanied during their time trial by one French police officer and one German police officer, riding concurrently. pic.twitter.com/63HOzN0bDc

If you were a camera gear geek, there was tons of gear floating around – especially in the stabilization departments.  Lots of brands and sponsors would use these first few days to get video/photos ready for use throughout the Tour and even over the next year.

Definitely one of the most awkward couch situations around.

After having their bikes checked riders get to wait together on the sofa. None appear terribly excited about the craptastically wet weather. pic.twitter.com/Cgxa0X06Kx

I’m still wondering exactly which team dragged that Neo down there.  It would have been a hell of a walk with that beast.  And it’s very unlikely it was taken by car, since the traffic flow meant the only cars going that way were in a queue to the start line.  A team may have taken it down via spare bike, since most teams have bikes for mechanics/staff to get around (city bikes of some sort often times).  And that doesn’t even address the question of how well it would work after hours in the dumping rain.

There’s a smattering of leftover trainers near the starting shack. Given the weather, some will continue keeping warm right up till start. pic.twitter.com/ZAslWdPeL5 — Ray Maker (@dcrainmakerblog) July 1, 2017

Meanwhile, these teams went with the easy route.  These trainers weigh almost nothing.

More trainers added to the starting tents. This time with riders. This rider was 2 minutes from starting their ride at time of photo. pic.twitter.com/unXGl29DZP

The whole system of organization within the paddock is always astounding to me.  Everything from exactly where team buses and cars park, to the logistics of ensuring there’s enough space in a very space-constrained place, to how the team vehicles are able to exit at the right times.

To help staff, media and others figure out where any given team bus is in the over mile long fenced area, they have an ordered chart. pic.twitter.com/xlQ9zjo87O — Ray Maker (@dcrainmakerblog) July 1, 2017

Similarly for logistics, the process of ensuring that the follow cars have the right names on them and the ordering is also interesting.  Especially the queuing with teams having a car in just the right spot in a very long queue of 10-15 cars/riders ready for each TT stage.  In the case of the below photo, this is what happens right after the rider finishes.

A few seconds prior to each rider crossing the finish line the team car is diverted. It’s here they swiftly remove those car name plates. pic.twitter.com/I2a4MkSSFK

I actually went to the podium and got some decent photos there of the entire presentation, though I didn’t have time while walking around to transfer them from DSLR over to phone (it’s not a fast or efficient process with my camera).  Still, found this funny on the way back.

After the podium ceremony, it’s this man’s job to walk back to busses the stuffed animals, trophies, and yes, the Wahoo KICKR trainer. #TdF pic.twitter.com/5bVlTEilcv — Ray Maker (@dcrainmakerblog) July 1, 2017

I will say one thing – someone, somewhere, has a brilliant contract for signage with ASO.

Basically, everything is that way. Even the Direction is directionally that way. #TdF pic.twitter.com/4GZnW0FeFl

Speaking of awesome contracts, I’d like to be Orange.

Want high speed internet provided by The Tour? It’ll cost ya! 600€ for the month. Someone has to pay for that swanky Orange truck out back. pic.twitter.com/vXGpQaC0kR — Ray Maker (@dcrainmakerblog) July 1, 2017

Meanwhile, realized I forgot to tweet this out.  Of course, you’ve now seen what this trainer is from my post this morning.

Many people see this ad and think about Garmin. I actually saw the ad and wondered where precisely it was shot, or if it was just a composite.  The setting is of an old airport, which I’m pretty sure is the old Athens airport based on some of the aircraft in the far background and the control tower.  I remember driving past it a few times during one of my work trips there.  Anyways….

Random: The billboards around the course and on the tram platforms at the start of the TdF here today are largely Garmin Edge device ads. pic.twitter.com/UqCJc4e4mn — Ray Maker (@dcrainmakerblog) July 1, 2017

Back at the hotel after exiting the elevator on the 8th floor, I noticed this down below in the parking lot.  A few vehicles aren’t Team Sky’s of course, but equally there’s probably a few missing too.  Kinda astounding.

In case you were wondering, this is the fleet of vehicles that encompasses Team Sky at the Tour de France. pic.twitter.com/AM4qBqrESC

After which point, some 15 hours after waking up to go to the airport in Paris, I was finally able to stop moving.  It was a whirlwind of a day!

Hope everyone found it interesting!  I’ll try and get through the editing of some of the DSLR photos into a combined gallery for the weekend of the weekend, especially things like podium shots and on Day 2 also all the starting line shots.  Having a press/photo pass made those a heck of a lot more interesting and easier.  So maybe I’ll do a round-up of Day 2 like this too, and tack them onto that.

With that – thanks for reading!  And for those non-cyclists, don’t worry, I’ve got some goodness coming for you later this week.  Sometimes it’s just the way the cookie crumbles.

P.S. – You can check out all my past Tour de France posts, which are largely behind the scenes type posts, here!