A few quick thoughts on the bePro Gen2…err…Favero Assioma 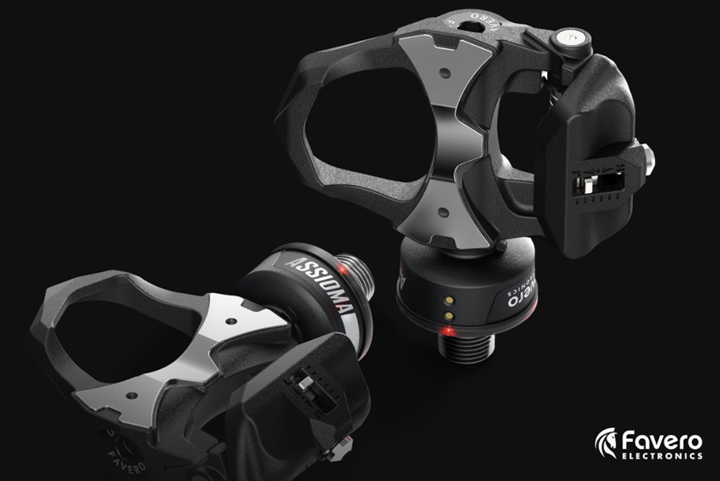 Earlier this week bePro announced their 2nd generation power meter.  Well, actually, they didn’t.  A company called Favero announced something called the Assioma, which is the successor to the bePro power meter pedals announced almost exactly two years ago.  See – while most folks know them as the bePro pedals, the company isn’t bePro at all – but rather Favero.  And these new pedals carry with it a new name – the Assioma.

That clarity providing moment aside, there’s actually some really good news in there.  Assuming things end up being accurate of course (which as always, is a big question).  The price – at 799EUR (or $900USD) is very competitive, just like it was before.  But more importantly is that now the previously laborious installation is gone, and the limitation to being just ANT+ is also gone.  Both were the primary limiters of the product.

But let’s not get too far ahead of ourselves.  I’ll note that I don’t yet have a unit in-hand, but a pile of you have been asking about this – so this will serve as a placeholder (thus, this is *not* a review).  I’m told I should have a test set shortly though.  So once I do I’ll start posting accuracy data from it. With that, let’s talk geeky.

In many ways, the pedal looks fairly similar to the first pedal.  It’s a relatively thin Look KEO-compatible pedal with a small pod at the end which acts as the battery and communications pod.  But looks can be deceiving.  The first item of note here is that the installation is no longer wonky-ass.

That’s what I’d describe the previous installation process as, which required special tools, stickers, and a bit of fairy dust.  Now though, the company is saying it’s just the same as any other pedal – simply screw it in and you’re good to go.  Or basically, the same as the PowerTap P1 is.

That, in and of itself, is great news for anyone looking at pedal based options.  Of course – do keep in mind that I still wouldn’t recommend doing this every day.  It’s a common question I get about other pedal based power meters like the PowerTap P1, Vector, etc… Ignoring any settling in period (sometimes upwards of a ride after moving between bikes), you’re just frankly bound to screw up one day and strip the threading.  If you’re swapping pedals every single day (people do ask), then you’re likely trying to use it bike commuting and it’d be really easy to accidentally get some sand or grit into the threads and then be up crap-creek.

Still – swapping each week for some reason?  That’s likely fine if done carefully.

In any case, back to the tech specs.  The exterior shell now includes status lights, which can be used for charging status as well as validation that all is well: 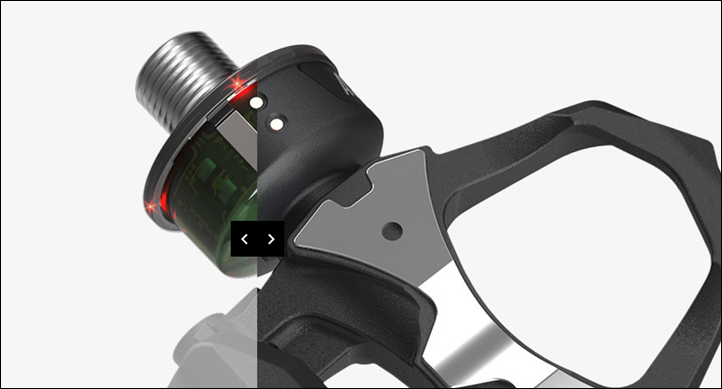 Speaking of charging, the new unit now gets 50 hours of battery life (compared to 25-30 previously).  Charging is also done via a new connector that should improve integrity of the pod.  Previously it was a micro-USB connector directly on the pod.  Whereas now they’ve got a small charging adapter that removes the risk-point of micro-USB in that region:

Next, we’ve got connectivity.  Previously the bePRO pedals were ANT+ only.  While in the grand scheme of things that wasn’t a big deal then, it’s more limiting now, especially with folks that may want to use it on apps like Zwift on an iPad or Apple TV.  The Assioma pedals are now dual ANT+/Bluetooth Smart.  And the company has confirmed that, unlike WatTeam, they’ll be able to transmit dual concurrently.  That way you can hook them up to your Garmin Edge via ANT+ while concurrently transmitting to Zwift on an iPad.  Or whatever floats your configuration boat.

Like before on the ANT+ side you’ll get power, power balance (left/right), cadence, torque efficiency, and pedal smoothness.  While on the Bluetooth Smart side you’ll get power, power balance (left/right), and cadence.  Of course, we’ll have to wait and see what adoption looks like from companies like Polar, Suunto and even now Garmin for support of these units over Bluetooth Smart.  Traditionally we see it taking a few months (or longer) until the quirks are worked out.

In addition to transmission of your training data over Bluetooth Smart, you’ll be able to use their new smartphone app to update the firmware of the unit as well as set the crank length.  The crank length is important for power meter head units that may not properly support it. 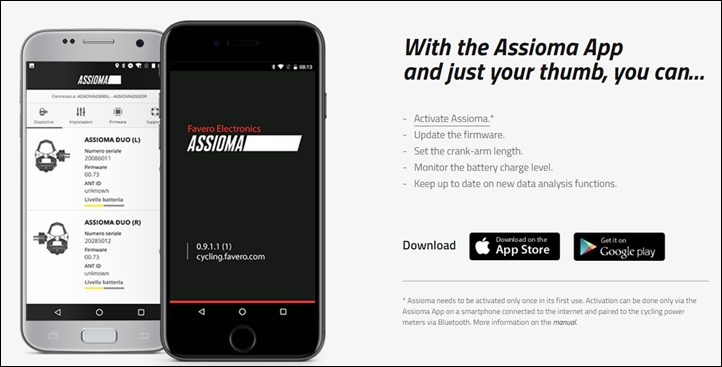 Lastly, moving onto some mechanical pieces.  The total weight per pedal is 149.5g.  To compare, a PowerTap P1 pedal with battery weighs about 206g.  Garmin Vector 2 per pedal weighs 179g.  So definitely the lightest out there.

The Favero pedals are designed to operate between –10°C and 60°C.  If for some reason you’re riding at 61°C (or anywhere near there), I suggest you consider medical assistance.  Meanwhile, –10°C just means you’re Canadian.

Below is a large pile of other technical specs (click to zoom in), none of which are too much of a surprise.  They’re all pretty much in line with other power meters on the market: 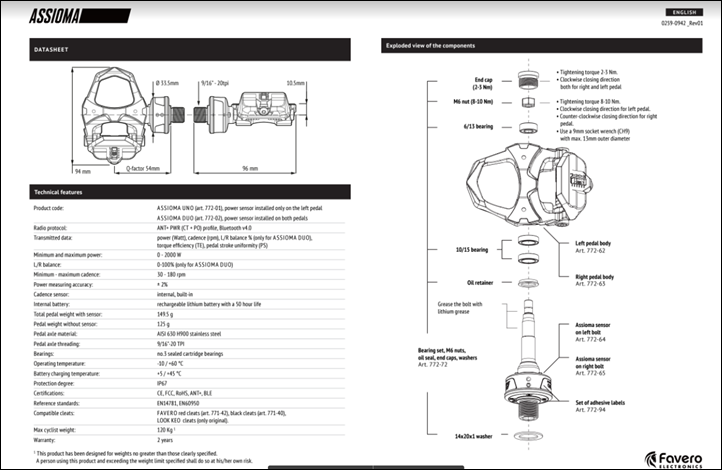 Finally, I do want to note there are actually two new products here.  There’s the Assioma Uno and Duo pedals.  The Uno pedal is the single-sensor power meter option, offered in left pedal only (but it includes a blank right pedal).  While Duo includes the dual left/right pedals with power meter sensors in both of them.

Update: Favero is going to separate it’s pricing scheme here more than first noted – one price for EU inclusive of VAT.  And then another price for non-EU excluding VAT.  So in the US for example, the prices are effectively as follows:

As you can see – that makes it even before competitive price-wise.

Currently the availability plan is July, but that sounds fairly tentative.  They are more confident in ‘by end of summer’.

(Minor FYI on Favero pricing: The company actually doesn’t price any products in non-EU currencies.  Instead, everything is priced in Euros – given Italy is in the EU – and retailers around the world can convert accordingly from there based on exchange rates.)

(Secondary FWIW: Yes, I suspect most people will mispronounce Assioma.  It’ll likely just be shortened in bike shops to the Ass Pedals. Which has a very memorable ring to it. There’s no such thing as bad PR, or something like that, right?)

So, is this a PowerTap P1 killer that some people are suggesting?  Well, the answer is more complicated than it may seem.  First off, there’s the accuracy piece – the Assioma has to be accurate.  But I’ll give the benefit of the doubt to the Favero crew, so for the sake of discussion presume it will be accurate.  Most companies on their 2nd generation power meters tend to get it right (not always, but almost always).

The second piece is that some folks will prefer different aspects of shape/size.  For example, the PowerTap P1 is chubbier/heavier – but lacks the pod-thingy at the end.  Whereas the Assioma is thinner/light in the pedal, but has the pod in between the pedal and crank.  Same goes for battery differences.  Some people prefer AAA (PowerTap P1), while others prefer re-chargeable (Assioma).  I’m personally good with either of these two tradeoffs in this case – so not really an issue to me one way or the other.

The next piece is whether Favero can keep it (or get it) in stock.  It’s something that Favero struggled with for much of the first year of the bePro pedals the first time around – with lead times well into the many months for much of that time period.  Now, that was also true of the PowerTap P1 pedals.  And even to this day PowerTap is still struggling to make enough of them – with it floating out of stock every once in a while.

Last but not least we’ve got price.  Using simple exchange rate math – the Assioma is basically $900 – or a solid $300 below the PowerTap P1 units.  For almost everyone, that’s a big enough difference that they’ll overlook the pod thing and assuming accuracy is spot on – they’ll go Favero over PowerTap.  But that ignores whether or not PowerTap can simply lower their price.  My bet is they can quite easily.  After all – they haven’t had to lower their price at all since announcement two years ago.  They no doubt manufactured the product with thinner margins, and I suspect they could easily go to $999 or match at  $899.

(Update June 7th, 2017: For US customers, the price will actually be lower – effectively $735USD, as Favero will be pricing products there without VAT and since the US doesn’t have a VAT import fee – it’ll make the Assioma incredibly well priced.)

I would think $999 is probably a safe bet for now, since you’d be paying the extra $100 for a bigger company with more global distribution and support reach (Update: Favero says that starting with Assioma they’ll have a US service center as well).  But…you won’t see that price adjustment happen anytime soon.  Not until they see a reason to do so.  In the same way that nobody reacted to WatTeam initially upon announcement.  Instead, new entrants have to prove their product is accurate and manufacturable.  Until then – all competitors will wait in the wings before adjusting price.  Thus I think the earliest would be Eurobike 2017 (end of August) for any price adjustment by anybody.

Still – I’m definitely excited about Assioma – especially given the price point and the fact that the company made a very solid Gen1 product in the bePRO pedals.  Looking forward to it.

With that – go forth and enjoy your power meter decisions for the summer!  I’ve got a plate of previously announced new power meter entrants either on bikes or in the mail – so by the time we get to Eurobike/Interbike in the fall, I should be in a good spot to have my Annual Power Meter Recommendations guide posted.

Update June 8th: You can now pre-order the pedals from Clever Training (US) here.  Don’t forget to tack on the DCR Reader 10% discount code of DCR10BTF, and you’ll also get free US shipping too.  And if you’re in Europe, here’s that link (also free shipping) – plus the same 10% discount code work there!