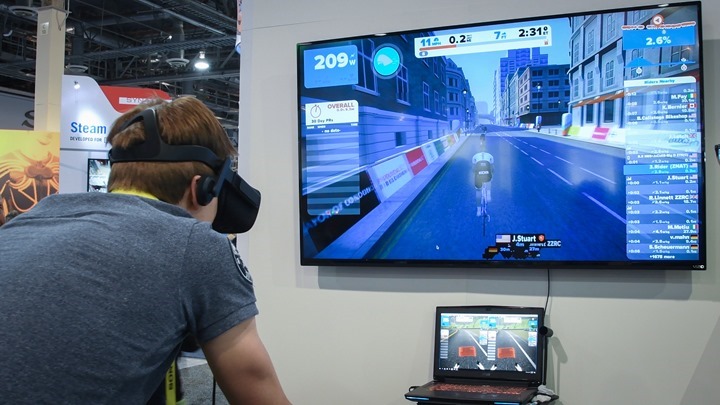 Back at Eurobike this past summer there was a lonely tent outside next to the bike trial area.  Under that tent was a single Wahoo KICKR, a flat-screen TV, a laptop, and a bicycle.  Oh, and an Oculus Rift VR headset.

You know…just the standard issue things you’d find next to any bike trainer setup.

I gave the Zwift VR setup a quick whirl at the time, though never ended up publishing anything on it.  In part because in my sleep deprived state I somehow thought a 48-second video clip and one photo of the TV would be sufficient for a post (you can see that unlisted clip here, in case you’re curious).

But this time around at CES – I was ready!  Or at least, half-awake.  So let’s dive into it.  Do note that this is totally pre-beta, and totally not released yet.  So like most of CES, it’s a preview of what might be to come.

(If you want to skip to a video overview I put together, it’s down below) 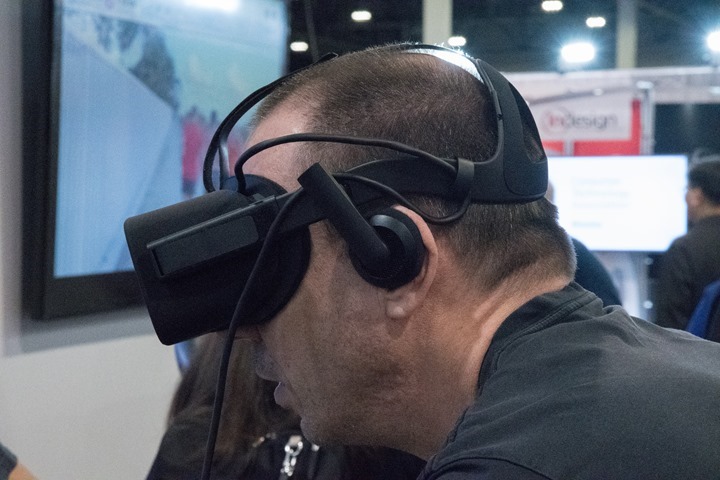 So what is VR?  Well VR (Virtual Reality) enables you to immerse yourself in an experience.  Typically that’s computer generated worlds (like Zwift), though not 100% of the time.  How does that differ from 360°?  Well, VR is 360 (when done right), but 360 isn’t necessarily VR.

VR usually implies some level of control within that world, like playing a video game where you move around.  Whereas with 360, you’re seeing the world in 360 and can change the viewpoint, but usually won’t have control of your direction/place in that world.  For example, if you watch any of my 360° videos here (a whole playlist full!), you can control the view, but I’m controlling the direction of travel (such as on a bike or on skis).  Said differently: You’re just along for the ride.

Oh – and not to throw too many things at you, but all of these are different than augmented reality.  That’s typically overlaying data onto glasses (or similar) that are actually showing you more detail about what’s in front of you.  So if you imagined your sunglasses overlaid the names and power data of Tour de France riders floating above their heads as they rode past you, while you stood on the side of the road on Alp d’Huez.  That’s augmenting your reality, by giving you more cool stuff.  But again, different than VR.

So as I was saying, with VR, you also need some sort of additional hardware to put you in that world.  Typically that’s a headset.  In the case of Zwift, they’re leveraging the Oculus Rift headset, which is one of the most popular ones out there. 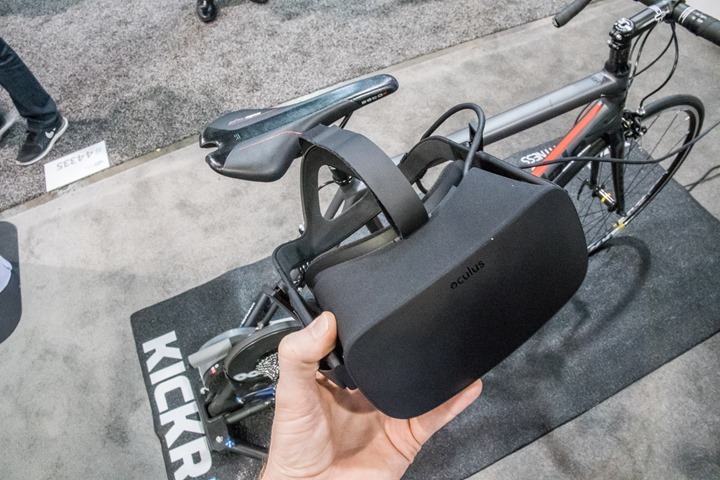 Next is that Zwift VR requires a PC at this time – and a pretty powerful one at that.  Though on the bright side you don’t need a big screen TV, since you won’t see that once you put on the headset. 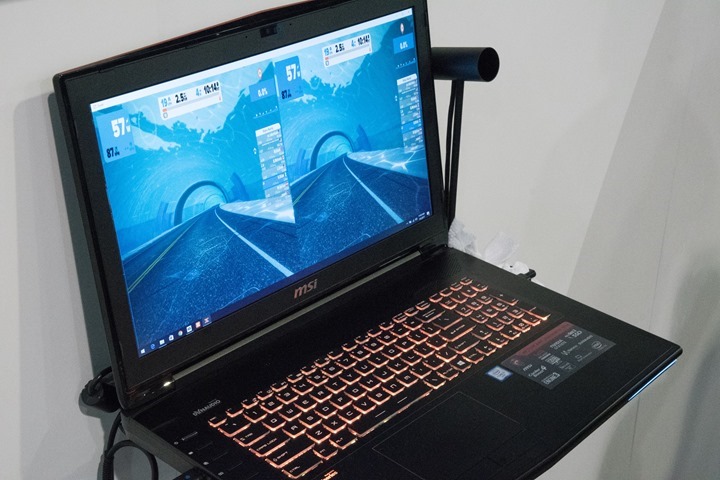 And of course you’ll want a bike and a trainer.  As sitting at your dinner table in your cycling kit and headset going nowhere will get kind of boring.  In this case, it’s a Wahoo KICKR2, but that’s just a function of them being housed in the Wahoo booth at CES.  You can use any trainer you’d like, and any bike you like (even a unicycle if you can find a way to attach it to your trainer). 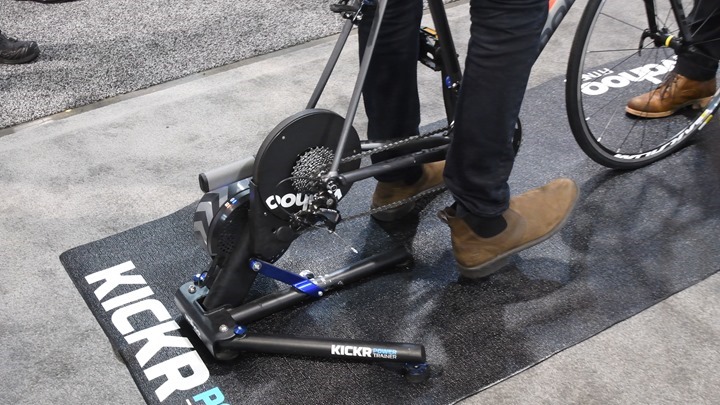 Finally, you’ll plop on that headset to get all VR’d up!  The headset will allow you to change your viewpoint.  Now normally in Zwift you’d change views into one of the canned options available.  But in Zwift VR you can turn your head to change your view, just like you would in real-life. 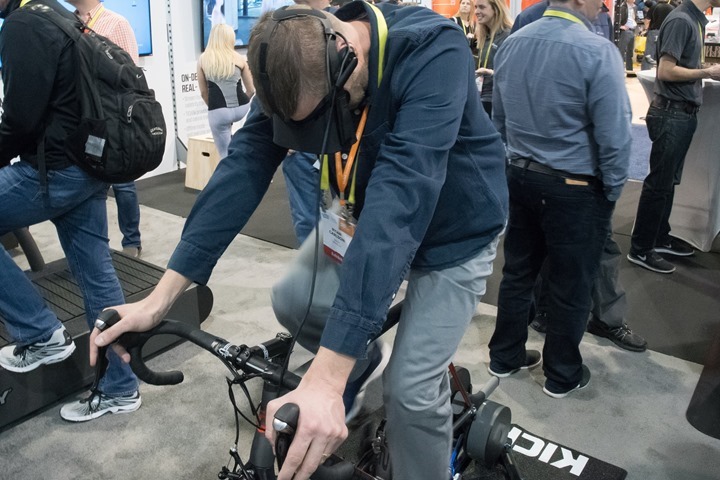 For example, if I look downwards (Froome Style) at the stem, it’ll show me the stem: 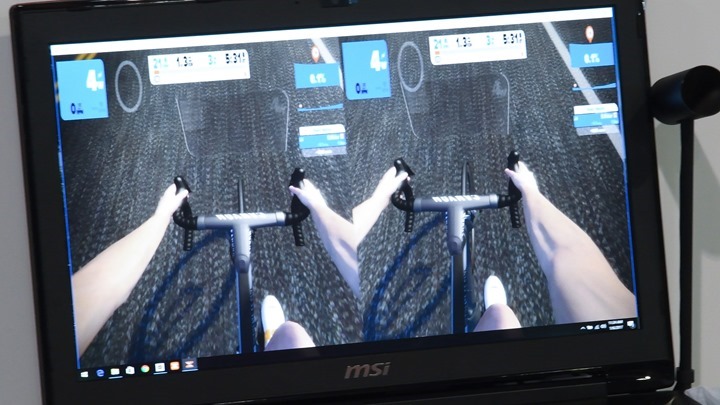 I can look anywhere I’d like, even behind me. This is pretty cool if you have a large group ride around you, to be able to look around and see the positioning of those in your group.

I put together a bit of a short video explaining all this, along with a bit more demo’ing how it works and feels in real life:

All in all it works pretty well, especially on an electronically controlled trainer because the resistance is changing with the terrain, making it more realistic.  Of course, for the ultimate in realism they or someone else would want to develop a way to change the pitch on the bike and shake it accordingly.  I also saw that at Eurobike too, and was originally slated for the same Zwift VR post that never happened.  Here’s what that looks like (first 48 seconds are Zwift, last half is crazy system from HeroVR):

Note that in that demo, it was more targeted at events and such, and not really consumers.  It also wasn’t running Zwift.  But I will point out it was pretty damn cool.  Had it been in Zwift, in a mountain bike mode allowing me to go wherever I like – that would have been the pinnacle of awesome.  Now I’m just waiting for Titanium Geek or Lama to put together instructions on how to build a DIY Zwift variant.

Is it done yet?

So is this the future? 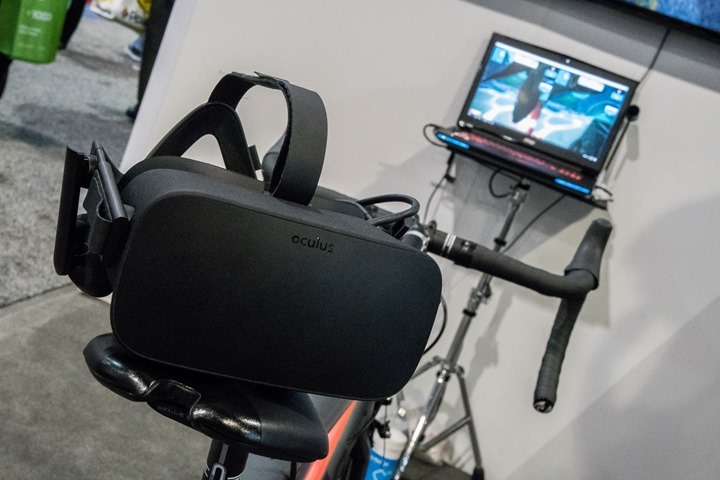 Let’s be clear: This is the future of indoor cycling.

But let’s also be clear: It isn’t the future anytime soon.

Why’s that?  Well in part because of the hardware limitations.  For example – at $599 a pop, an Oculus headset isn’t cheap.  And said headset simply isn’t designed for a long and intense sweat-fest.  You’ll kill them after a ride or two.  Not to mention it’ll get hot and stuffy inside the headset.

Of course, there are cheap cardboard-style systems (and other plastic ones) that you can put your phone in and achieve a similar VR effect.  But in my experience, there’s an inverse relationship between the quality of these headsets and whether you get motion sick using it.  The more expensive, the less sickness.  The cheaper, the more sickness.

I’ve actually tried a bunch of cycling VR simulations over the years.  And without question this was the cleanest setup I’ve ridden.  And the only one I didn’t want to exit the bike immediately (I’m lucky in that I’ve almost never gotten motion sickness, even in the roughest of seas, flights, or situations).

But again – the biggest challenge is just cost.  Zwift has actually had this capability since almost the very beginning.  In fact, they sent over a photo to me, showing a very early meeting where this existed – all when the company was only a couple of people: 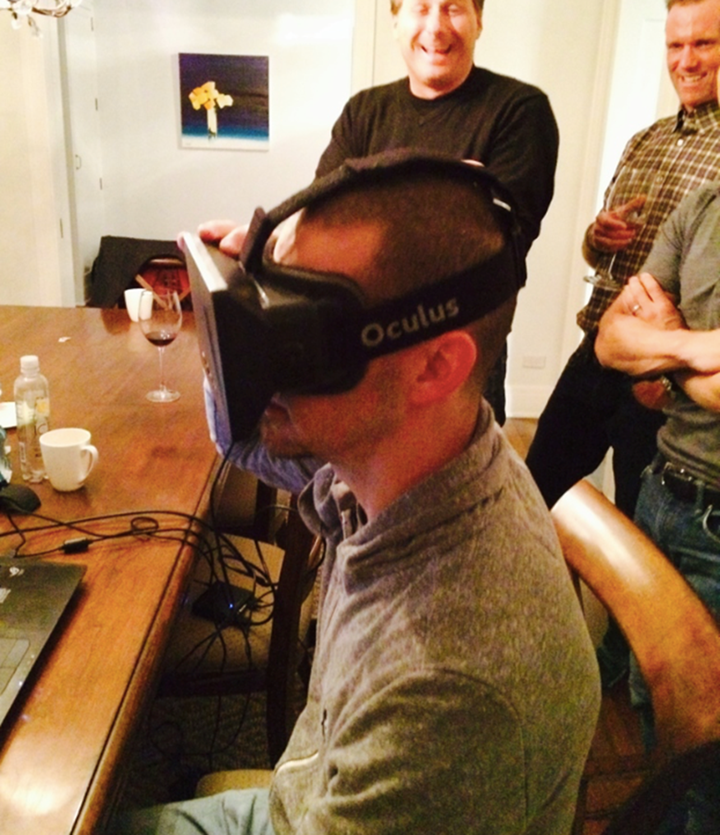 John Mayfield, Zwift’s founder, notes that this is really about showing where the company could go:

“Our aim with demonstrating Zwift VR was to show what is possible.  If you actually get in a group ride in VR mode it’s is unbelievable – the feeling of riding with other actual humans is overwhelming.”

He goes on to talk about some of the challenges with hardware:

“I actually added VR mode to the software back in 2013 so it’s been in there all along, but disabled.  In fact I gave Eric Min a demo of it the day we first met at my house.  The problem is that even 3 years later VR headsets are not common devices, and the gaming computers needed to power them are equally scarce – at least among cycling enthusiasts.

Lower price point and more exercise friendly VR headsets are on the horizon.  The PSVR is a good example at $399, and it has a headset that isn’t pressed up against your face.  Seems like it ticks off both of the checkboxes, aside from probably being for PlayStation 4 only.   Phones are also getting more powerful, although I see it taking a couple more years before they are really an option for full detail MMO style 3D applications in VR. The A10 in the iPhone 7 looks to be a real powerhouse….one step closer.”

So might there be something that could sneak out down the road?

“I wouldn’t rule out a quiet release of it as an Easter-egg type feature so that the Zwifters who own a headset (HTC Vive or Oculus Rift) could try it, but I can’t commit to it right now.  We are still small (literally 3 programmers plus me make the Zwift “game”) and we need to stay focused on delivering the best non-VR experience first.”

All of which makes sense.  Zwift is developing at an incredible pace, and gathering an even more incredible following.  One only need to log in any given night this winter season to see that.  So redirecting resources elsewhere probably isn’t ideal for 99.99% of users.  At the same time, being on the leading edge of tech is all about being on that edge.  It’s about pushing the limits of what’s possible, and making people re-evaluate their previous positions.

In my case, until this point my experiences with cycling in VR have all made me want to find the nearest rest stop.  But Zwift VR was different – it was the first time it was actually interesting and engaging.

Now we just need the hardware to catch-up.

Catch all the CES 2017 posts here in one handy to read page.  And fear not – there’s still tons more to come from (the massive backlog of) CES!