GoPro adds data overlays to the Hero5: Here’s how it (sorta) works 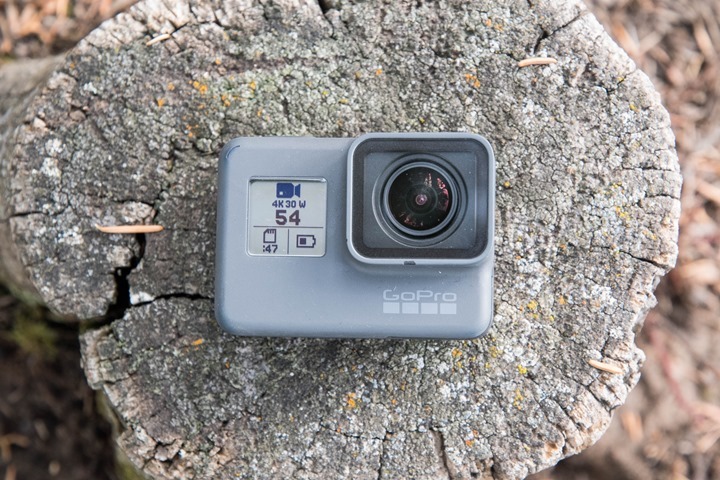 Today GoPro rolled out their data overlay capability to the GoPro Quik desktop suite.  This allows folks with the GoPro Hero5 Black camera, which contains GPS, to add in metrics like speed, distance, vertical, and more.  It catches up to what Sony, Garmin, and others have done – likely through using components from GoPro’s acquisition of Dashware in the Spring of 2015.  Note that this is *only* available for the GoPro Hero5 Black, as the Hero5 Session doesn’t contain GPS.

Oh – and before you move forward, triple-check that your version in Help > About on the desktop app is at 2.1 or higher.  It took two attempts at the install before it seemed to take for me.

Giving it a whirl:

Now one of the benefits of this change was that in theory GoPro Hero5 Black units had already been recording GPS data all along.  So I reached back to some footage I shot back in early October in the Canadian Rockies to see what I could make of it. First up was cracking open the Quik app and importing some footage in.  I keep a copy of all my footage on local hard drives, separated by action cam type/name, so it was easy for me to dump all my Hero5 Black footage I’ve ever taken into it. 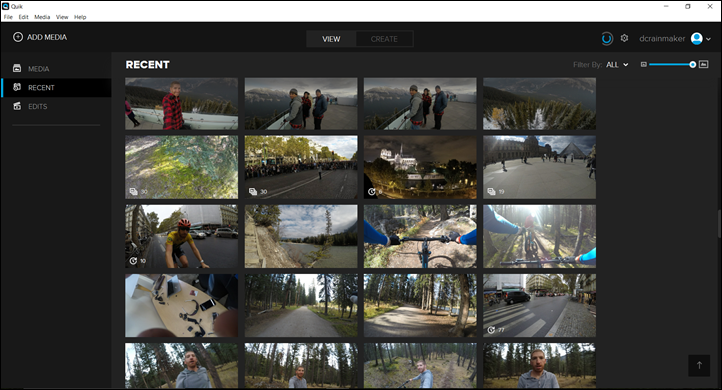 You’ll notice if you select any given clip (double-click to open), you’ll get a new option along the bottom: 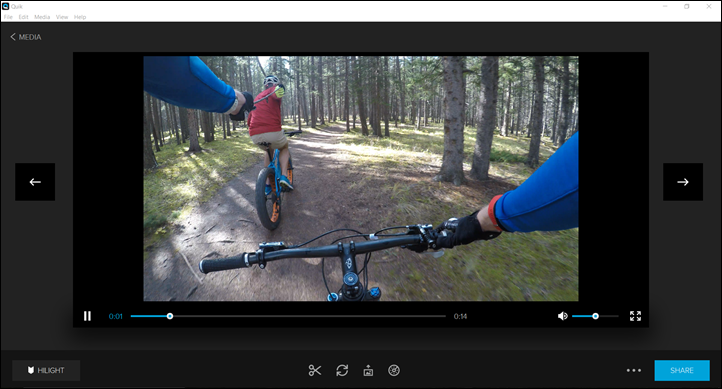 Click on that little speed icon (the bottom group of 4 buttons- farthest right) to get started: 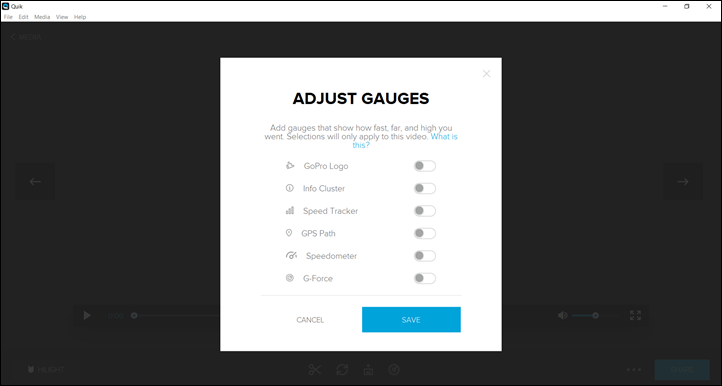 Next you can select which overlays you want for that clip.  Thus, I did that.  The oddly named ‘info cluster’ option includes Distance/Altitude/Elevation Gain/Date & Time.  Whereas speed will give you speedometer, compass, and speed graph.  GPS path is a mini-route map.  And G-Force is pretty self explanatory. 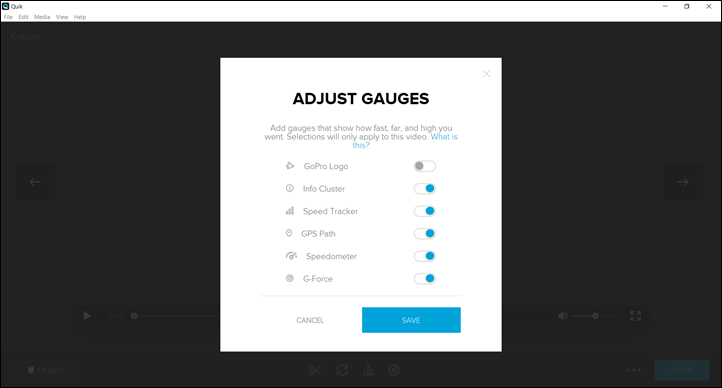 A few seconds later these will show up on the clip you selected:

You can also go into the settings and select this by default for all clips (see bottom), along with changing the data types from imperial to metric.

Next I selected some semi-interesting clips.  I skipped the non-moving time-lapses at the top of the mountain (as stunning as they were), and went from there. 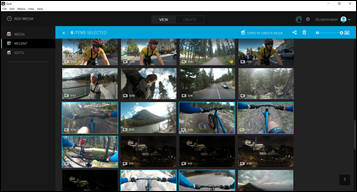 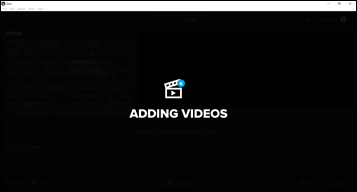 Then it’ll dump them on a timeline.  First thing I do though, is pick out some music and set it to 60s.  I’ve gotta say, probably the single best feature of this Quik app (aside from automatically splicing things in a semi-decent manner) is the music.  It just makes my life a million times easier when I publish to YouTube that I don’t have to deal with music copyright issues (YouTube may sometimes flag it, but you merely appeal the flag and GoPro automatically takes care of it).  They explain it on this page here.

It’s an area that Garmin could significantly improve on their app, as their music library is much more limited compared to GoPro’s. Just remember, the majority of songs on the GoPro music library require GoPro Plus membership (the $5/month service).  An improvement for Quik would be if the app allowed you to easily filter the music by the various moods they list.  Otherwise it takes forever to find a song that’s a good fit. 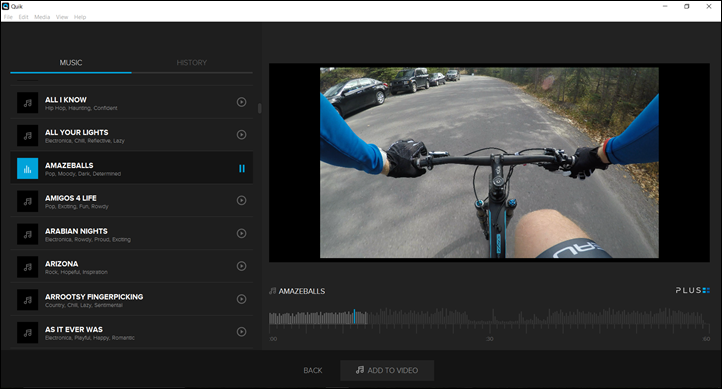 Next, you’ll go ahead and click on various ‘exciting’ points in your video clips on the upper left side.  This isn’t quite as clean as the mobile app, which can automatically generate from known points and/or highlights.  I wish it was more like that, something that Garmin’s VIRB Edit app does.  Still, it’s not too hard to tap the various points, which show up as blue dots on the left side. 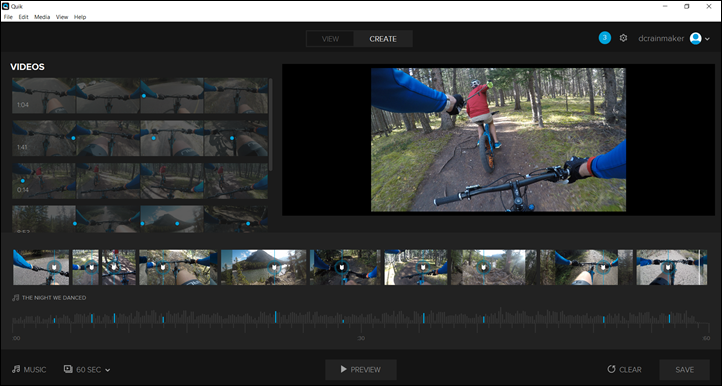 Once you’re done, go ahead and hit that ‘Save’ button.  Note that at no point does it actually display metrics during the above phases.  Give it a name, and hit Save again. 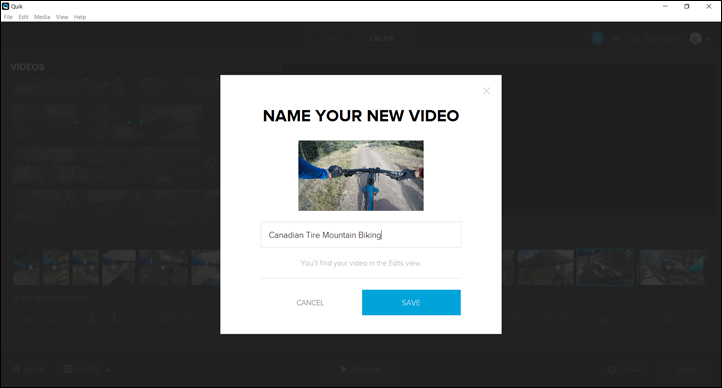 Then wait a little while for it to finish doing its magic.

Then you preview your finished video…and find no data overlays show up: 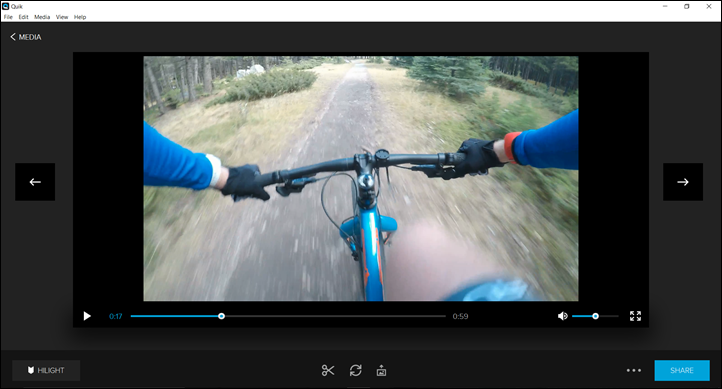 Hmm, so I did the whole mess again, this time on a shorter clip.  Nothing. 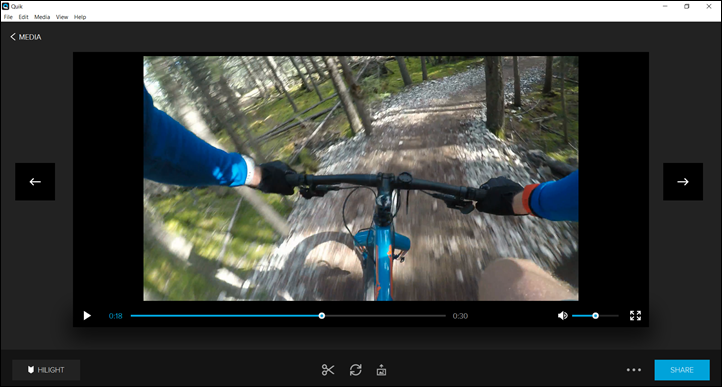 Then I restarted the app, picked some totally different overlays.  Nothing.

So then I thought? What if it’s my old (but beautiful) footage?  So I headed outside (at 1:27AM) and ran up and down the street and got some quick test footage to work with.  Ugly (but new) footage. 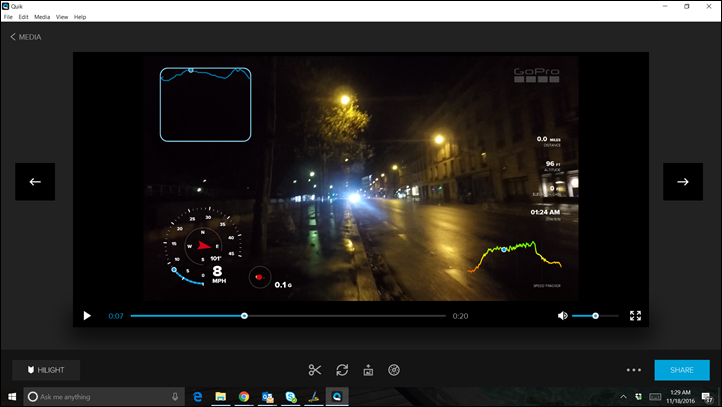 (One interesting thing I noticed is that the overlays constantly blinked when I played them back, I have no idea why)

Then I just selected to create a single non-fancy edited clip right from there. 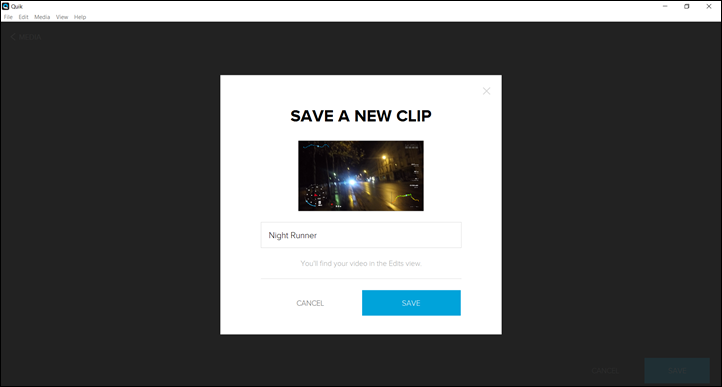 And woot – that worked! 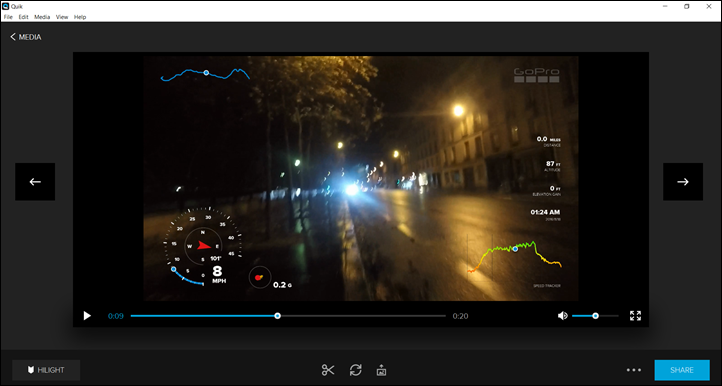 So, I poked around a bit, first at GoPro’s announcement article, then at one I found on Engadget’s site, which included this tiny little note:

“While the gauges will show automatically in Quik’s “view” mode, they don’t instantly carry over to the edit screen. To include them on edited clips, click the “scissors” icon under Quik’s preview window, and select the whole video (or the part you want) and save it as a new clip. Re-import this into your library and you’re good to go.”

In unrelated news, I’d like to punch myself in the balls…’good to go’!

Seriously, this is stupidly miserable.

Why?  Because it takes forever.  For each clip I need to do this manually.  The entire bloody f’in point of Quik is to be…quick.  You know, like the English word it’s named after. So now I have to:

1) Select Clip A, validate dashboard metrics are enabled
2) Resize/tweak as required
3) Export Clip A, which takes 3-10 minutes to render depending on length
4) Rinse and repeat Step 1-3 for each source clip in my sequence

(My previous 60 second montage had 11 source clips in it, so that’s basically an hour+ of PITA work right there before I even start the ‘hard’ part of finding the interesting pieces.)

As a casual reminder for how this works on Garmin’s VIRB Edit (and other suites like it), you just pick a bunch of clips at random and it automatically creates a magical video and adds template overlays.  Done.  If you want to manually edit clips, you can do that too – but again, it doesn’t render the overlays until the very last step (logical).

At this point, I started this entire mess some hours ago, and I’ve long since lost motivation to create you an exciting montage.  Instead, here’s just 60 seconds of mountain biking with some data overlays.  This was with the older videos, but it’s no different for the newer videos – you still have to re-import/re-export all the time, every time.

I’m at a loss here.  On so many levels, but these two in particular:

1) Given GoPro got grilled in numerous media reviews at launch/release for not having any usefulness for the GPS data, or overlays, why on earth would they just have not said then “We’re actually already recording, and we’ll enable data overlays by the end of the year”?  That’s simply lost sales to Garmin, Sony, and others for two months due to that.  There’s countless reviews/videos/etc out there saying GoPro doesn’t have that functionality.  It also likely would have persuaded Hero5 Session buyers to ‘buy-up’ to the Hero5 Black, if they knew the GPS functionality would be leveraged so soon.

2) Why does someone think it’s a good idea that you need to re-snip and re-export/re-import every clip twice into your library?

I used to be on the side of defending GoPro and some of their business moves over the past year as just one small error (Hero4 Session) compounded by bad, timing and pricing.  But at this point, between the Karma Drone recall/failure, inability to ship numerous products (i.e. the Lightning Quik adapter still isn’t available, nor can you buy any gimbal products yet, two months later), and then missing production numbers per their earnings call – I think it’s probably time for some leadership change.  I get the impression that nobody in a leadership position is actually trying out their own products and how they compare to competitive products (from DJI, Garmin, Sony, etc…).

GoPro is in all the right positions to nail these segments, yet execution continues to fall flat. Shame, something I think everyone will want to see remedied in the future.

With that – thanks for reading (and watching).