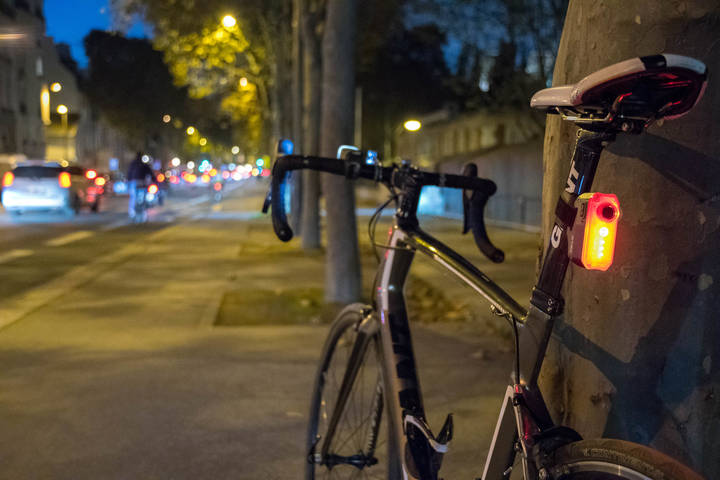 You know when you look at that stack of mail piling up on your kitchen table and decide to sift through it tomorrow?  But tomorrow’s been happening for an indeterminate amount of time?  Well tomorrow is today.

As I continue the random clearing out of Interbike related news, I bring you an update and some hands-on goodness with the new Cycliq Fly6 light-camera combo.  You’ll remember this nifty gadget back from a few years ago, paired with a few updates along the way.  It’s essentially a bike light that also contains a small HD camera within it, allowing you to record wonky things that drivers do behind you.

Since its initial release, users have recorded plenty of crazy things using the unit, some of which they showcase on their site.  Beyond those uploaded, I’ve heard from readers (including one this summer right here in Paris unfortunately) that have captured other bike-car crashes, albeit not ones they wanted to share publicly.

In any event – the company has started shipping a slightly updated version of the Fly6, so I figured I’d briefly cover it here as they handed off a loaner unit to me at Interbike to check out.

So first, let’s start off with the box contents.  As that’ll give you some hints as to what’s different.  Mostly though, I’m never one to pass by an unboxing session. 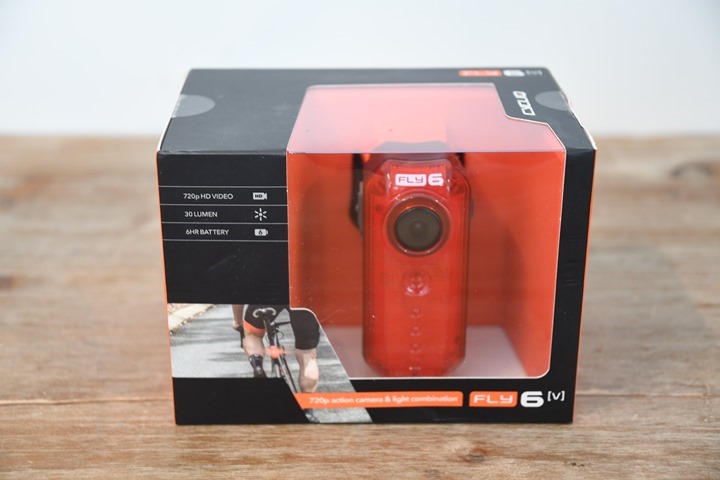 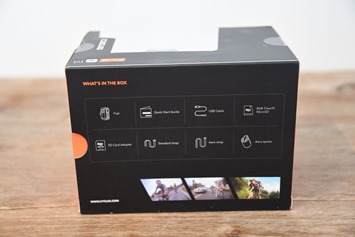 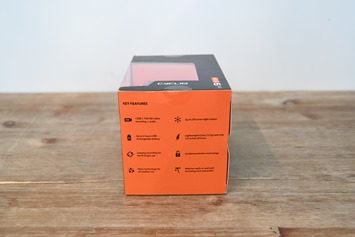 You’ll slide out the inner plastic shell, which holds the Fly6 inside the window. 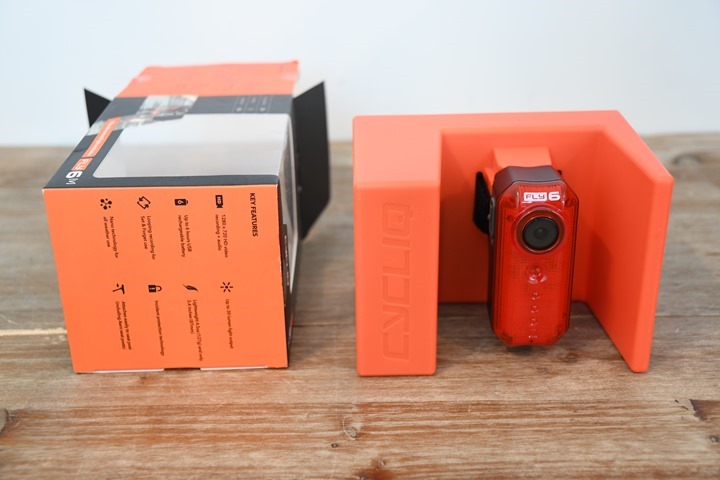 After removing all that, you’ll find this pile of parts: 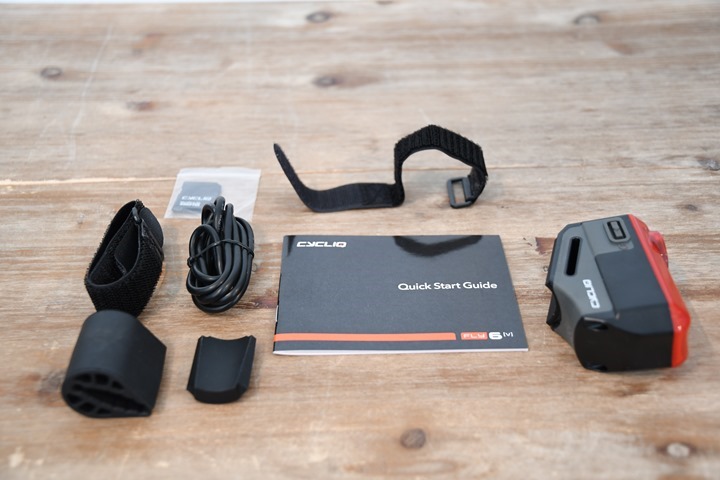 Within that, we’ve got:

With everything out of the box, it’s time to move onto the next section. 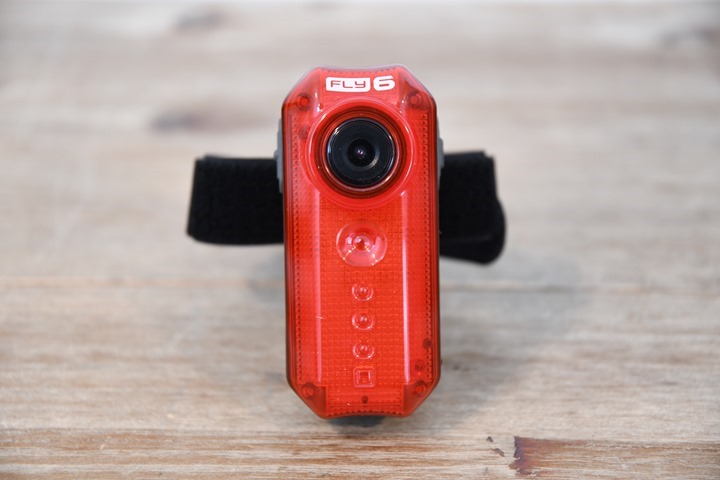 Now you may be wondering what’s different about this unit from the last one.  And the answer is…not much.  In fact, it’s really only one thing: The mounting bracket.

Sure, if you compare it to the very original Fly6, then it’s quite different.  But in between the original Fly6 and now, there was the Gen2 Fly6.  Yes, I know, we should be up to Fly7 or Fly8 by now*.  Between the 1st and 2nd editions we got:

Size: The size has been dropped by about 1/3rd, specifically in the length dimension.
Battery: Increased battery life slightly.
Camera: They’ve increased the quality of the camera used.  It’s still 720p, but they went with a higher quality unit that should produce better imagery.  Additionally, the camera has improved white balance performance.
Lens change: They’ve improved the lens design a bit, which reduced the warping effect that could sometimes be seen.
Added G-Sensor: This improved the crash recognition mode over the Gen1 tilt-switch sensor.
Automatic Computer Detection: It automatically shows up on your computer when plugged in (versus requiring powering on previously).
Light: Doubled the output of the light used in the unit to about 30 lumens.  In addition, they’ve added a solid illumination mode to comply with various European regulations on bike lights (no blinking).

So in summary, if you have an older original version, then the new version is all that Gen2 stuff above plus the new mount.  Here’s a look at the three editions (Left to Right: Gen1, Gen2, Gen3): 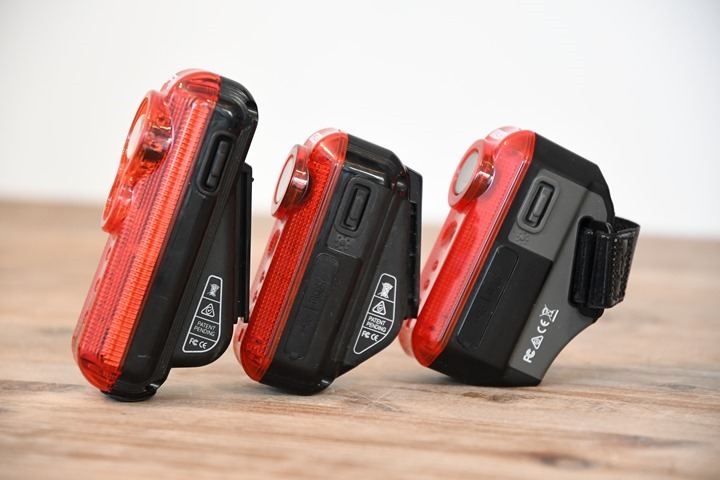 Looking at it with the mounts attached, here’s how they compare side by side between Gen2 (left) and Gen3 (right): 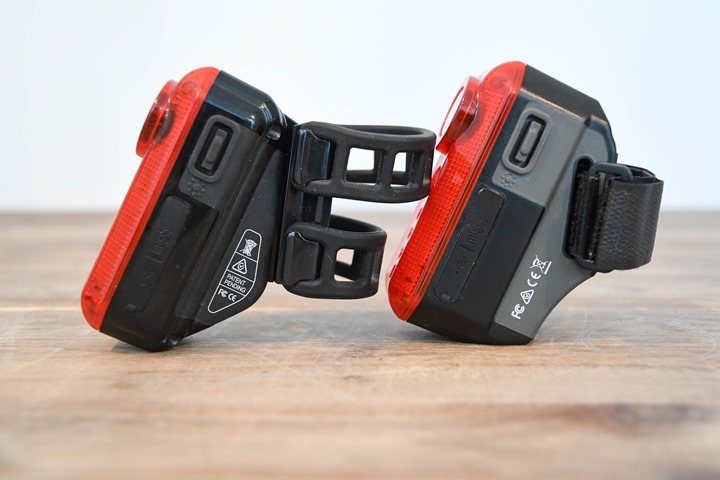 Basically, they got rid of the breakable rubber bands.  Some people had a lot of bad luck with these older bands and the connector clip, while others had no problem.  I had mine on my bikes for upwards of a year without issue until semi-recently when I broke one band (though it ships with extras), whereas others seemed to break them during the unboxing.  Either way, I’m sure everyone will be happy they’re gone now. 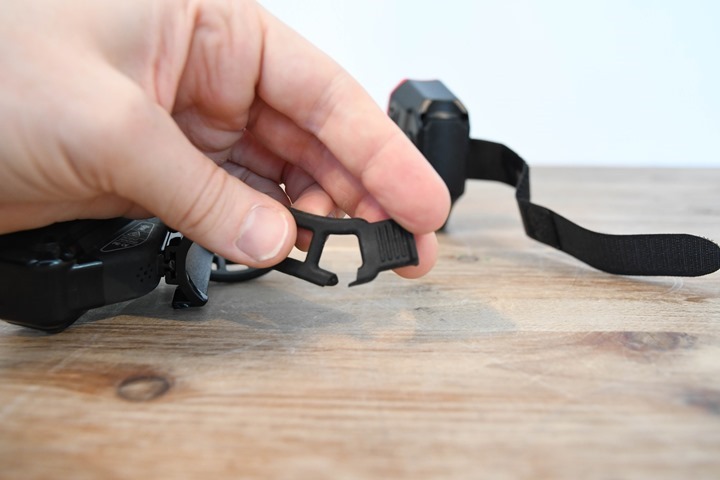 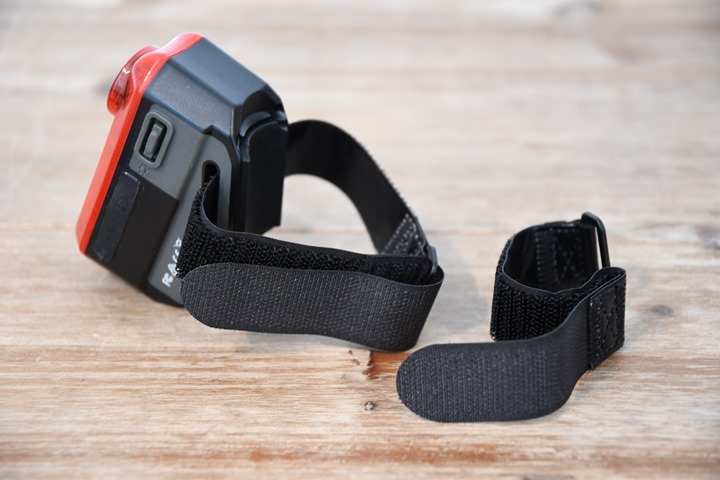 What’s interesting about these though is that they have this grippy surface on the inside of them, to keep them from sliding on seat posts.  It’s a very similar material to what Garmin uses on their HRM-SWIM heart rate straps to keep those from slipping while swimming.  See how below it’s almost shimmery? 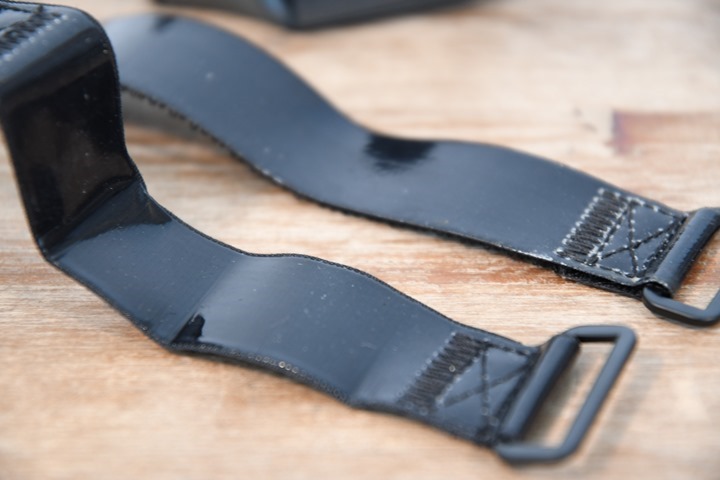 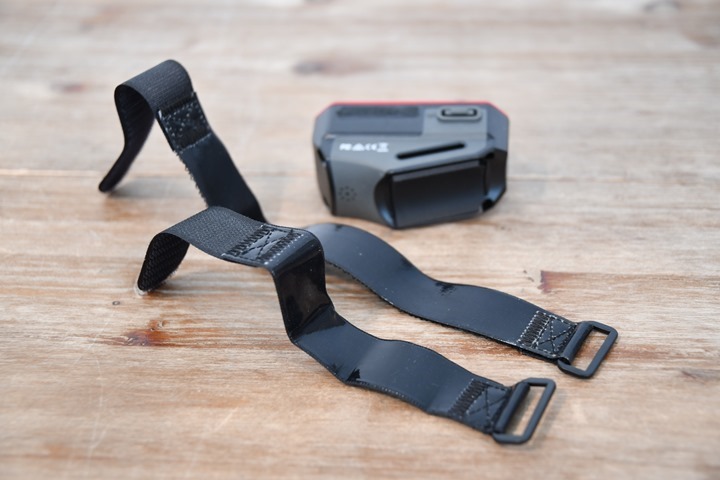 Note that the company says they have made some minor internal power management improvements, which should get you closer to 6 hours of battery life.  But ultimately one should look at this as just a minor refresh.  Certainly not likely worth re-buying a unit for, but if you’re in the market – then it’s kinda the icing on top.

*Yes, I know that the Fly6 naming is actually a reference to ‘on your 6’, meaning, behind you.  Hence why the Fly12 is ahead of you. 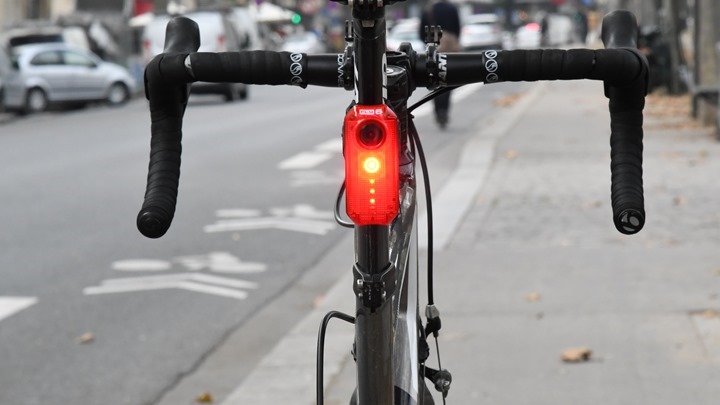 This wouldn’t be complete with at least a quick video sample around the ol’ block.  Literally in my case.  I’m pretty much spending all my time in the DCR Cave this week working my way through trainer apps for the updated massive trainer app review post coming up in a few days.  But I figured it’d be worthwhile to allow my bike to see the light of day for just a few minutes.

Here’s an overview video I’ve put together of everything, including sample footage from the units during both day and night.

And if you’d like to download the original footage (since YouTube compression can make it more difficult to read license plates), then you can do that here.

As you can see, the quality is basically the same as it was in the 2nd gen units (720p).  Which is to say that it’s fine for picking up a license plate during day-time, but is a bit trickier during the night (rather difficult actually).  Ideally they would have gone with a 1080p sensor like in the Fly12 to give more detail, but unfortunately that didn’t happen. 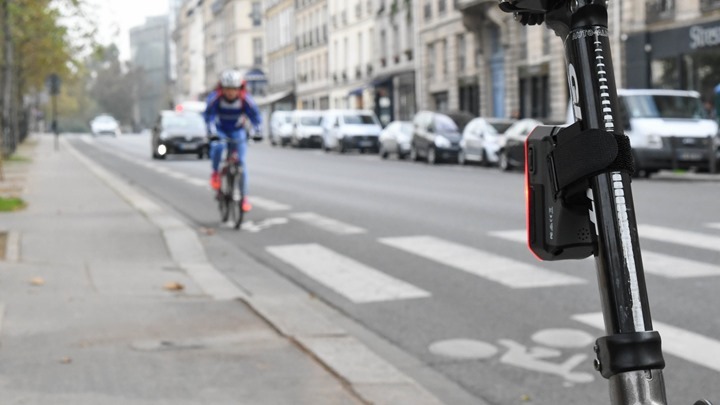 As I noted above, this isn’t a revolutionary update for the Fly6.  It’s barely incremental.  It’s common for companies to make minor manufacturing tweaks to products to address customer concerns, and this is an example of that.  Of course, I’d loved to have seen them add in Bluetooth & WiFi connectivity like the Fly12 has (front-facing), but that’s not in the lunchbox today.

Still, the Fly6 is really the best option out there today for combining both a bike light and a rear facing camera.  No, it’s not a GoPro, and the company doesn’t aspire to be a GoPro replacement with this product.  The quality isn’t in the same league.  But at the same time, the GoPro isn’t a bike light.  Nor does it have the ability to automatically save files in the event of a crash.  As we head into the winter (up here in the Northern Hemisphere anyway), folks will have their commutes soon take place in the dark and when cycling in the dark lights are essential.

Of course, the Fly6’s camera alone won’t prevent a car from hitting you (hopefully the light does that).  But in the event there is an altercation between you and a car/driver, then at least you have something to show your side of the story.  And sometimes, those something’s become viral. And when that happens, it might just educate a driver or two on being more careful around cyclists.  Or perhaps, they’ll just think twice that maybe there’s a camera on that bike recording their actions.

So if you’re looking to minimize the number of devices on your seat post, then shelling out $169 for a combined safety cam and tail light, the Fly6 is really your best option today.