Finally, a relatively calm weekend here at home.  Now technically the weekend is still continuing here, as Monday is a public holiday for many in France.  And while the weather wasn’t quite as nice as last weekend, we made the best of it.

1) Swim with the Expat Tri team

Friday late afternoon we headed a few blocks away from the Eiffel Tower to join up the Paris Expatriés Triathlon club for a swim session.  To date during my nearly four years in Paris, I’ve only ever swam in public pools (during public hours).  So swimming with a team would be a first.  Most notably that the pool was otherwise closed to the public during this timeframe, making it quite a bit calmer. 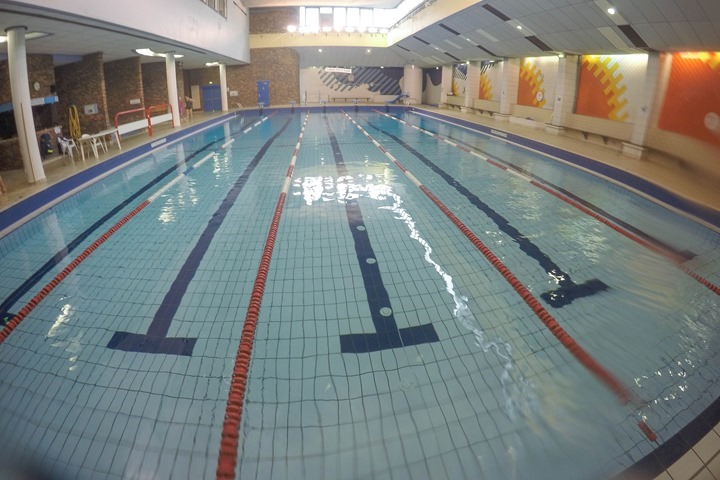 The workout was pretty good, a bit of variation.  And most importantly – I didn’t have to deal with 19 other people in my lane of varying speed.  Everyone in my lane was quite brisk.

Both The Girl and I swam.  Regrettably, our post-swim selfie didn’t come out too strong.  GoPro had generally crap pictures inside the pool for some reason.  Odd.  Sorry!

I headed out Saturday afternoon for a 70ish minute run with a boatload of watches.  I was doing GPS and optical HR accuracy testing, primarily of the FR735XT and Vivoactive HR.  Though, anytime I’m collecting data I’m doing so with current firmware on various watches.  So I was equally curious if GPS improvements had been made with the Suunto Ambit3 Vertical since that came out last fall.  So kinda a twofer type test. 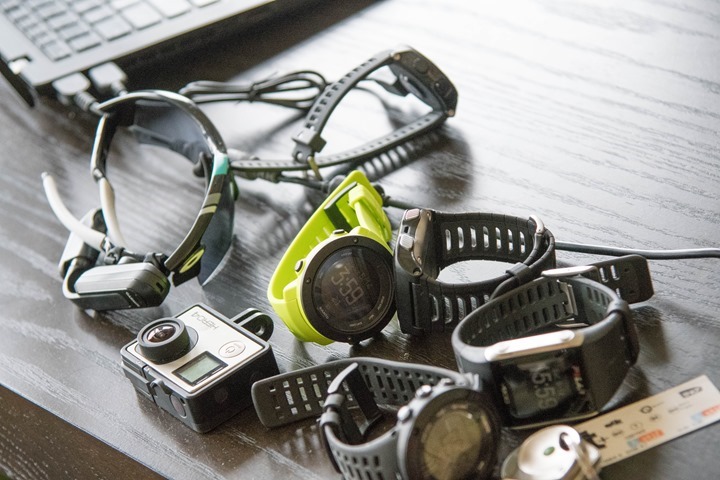 When I’m dealing with optical HR sensor watches, I like to only have one per wrist.  For GPS testing, I place the remainder on the upper shoulder straps of my CamelBak, which gives it good strong GPS signal location without much interference.

In this case, all 6 watches came out fairly close. 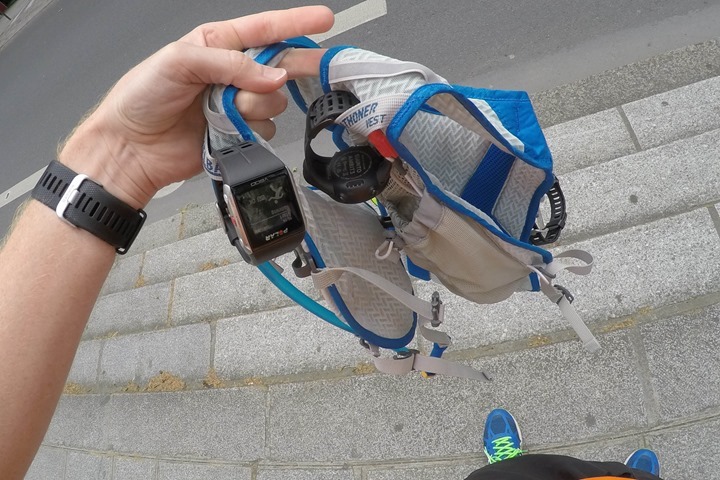 Here’s the analysis link if you want to dig into them a bit more.  All units tracked very closely, with them all within 100m +/- of the FR735XT.  The only notable variations you see in the GPS track was a single large bridge underpass, and some slight differences at the turnaround point.

Oh, and I was wearing Varia Vision connected to the FR735XT: 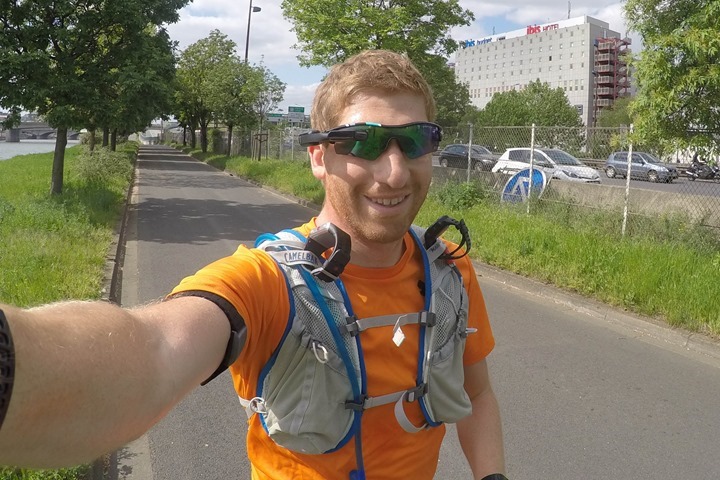 Short summary of that experience: While I find it just fine and dandy with cycling, it’s bound to make you motion sick while running.  My sunglasses bounced around quite a bit.  That said, it was kinda nifty not having to ever glance at your watch.

Afterwards, The Girl and I grabbed a rather late lunch at the crêperie around the corner: 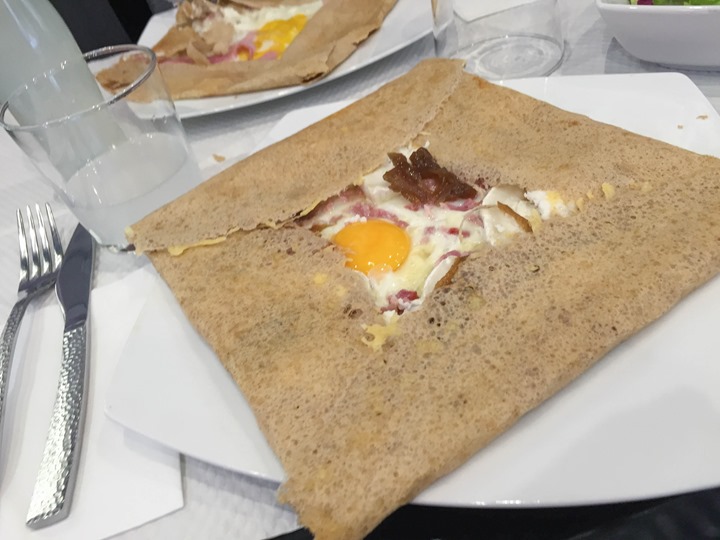 Hard to top off that ending to a run.

Well, I was back on the roof trying to kill watch batteries again this weekend.  Specifically, the FR735XT’s battery.  Now the battery in this unit has been of interest to a lot of folks, due to its claimed 14hr battery life (with optical HR & GPS enabled).  Some have said that seems odd given an Ironman has a 17hr cutoff.

So I was curious: What if you saved on the optical HR and instead used just GPS and traditional sensors?  Even more so since the optical HR is disabled during a swim (1-2 hours likely for those above 14hr finishing times).  How long would the watch go on just GPS alone?

Well, I set out to find out.  First test came in at 19hrs (well, 15 seconds short of it), but that was with Smart Recording, and there wasn’t a ton of data. 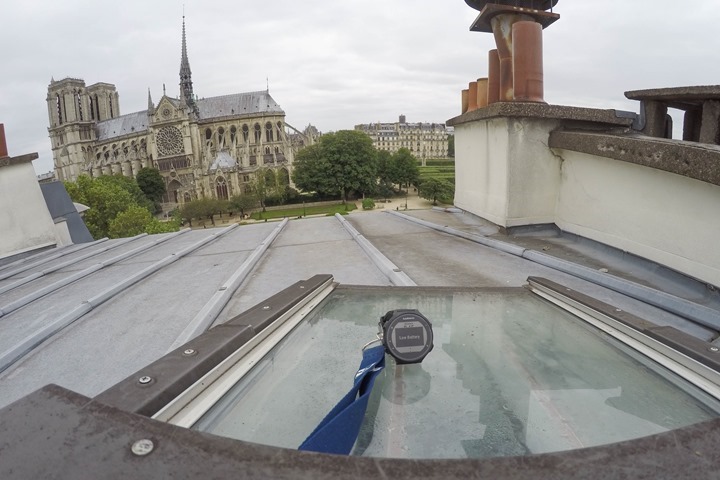 So I set up another test last night, this time using an ANT+ simulator and 1-second recording to generate continual HR/Power/Speed/Cadence data.  More on that once it finishes. 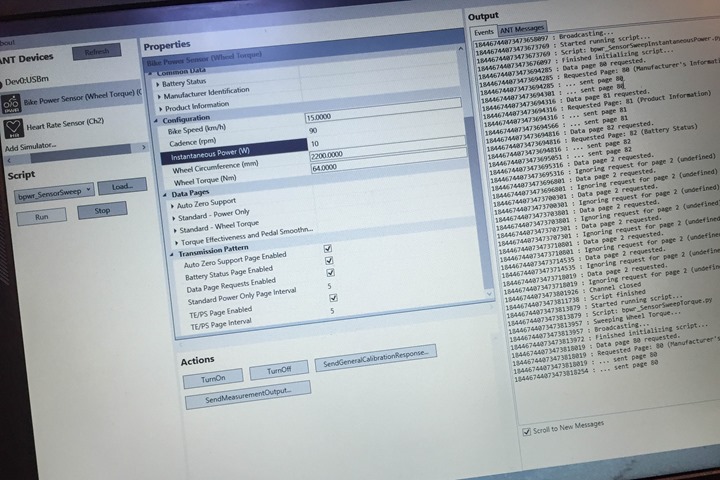 As for testing optical for long-life battery tests, I haven’t quite come up with a great idea.  Some people have put watches on potatoes, meat, and other objects to get a fake pulse.  That might work…but I have a feeling that leaving a steak atop my roof might result in some pretty interesting footage that’s not at all related to the watch.

Saturday afternoon The Cake Studio was filled with kids for a birthday party.  I had thus spent the morning ensuring that it was a bit more kid-proofed than usual.  While we often have events in there for adults, kids present an interesting…challenge.  Especially in what’s otherwise a day to day working kitchen (with the DCR Cave below it underground).

With our office space soon full of extra mixers and baking racks, The Girl and I got busy getting the main table all ready. 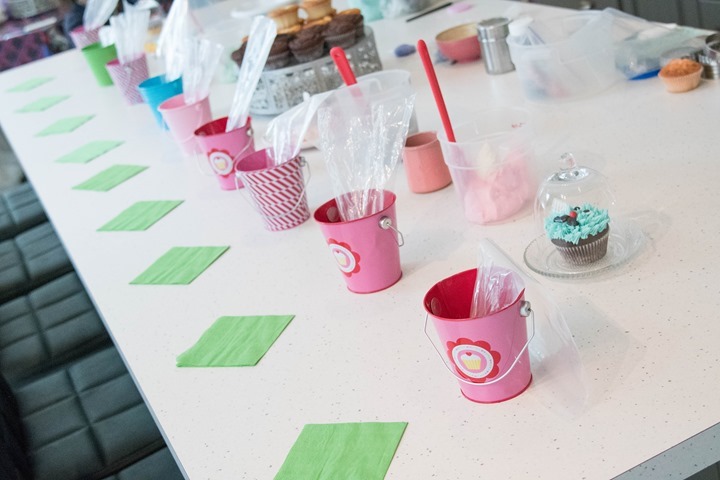 The space had been rented for a kids birthday party, and The Girl would be working with them to decorate their own cupcakes.  She’d channel her inner school teacher (remember, she used to be a teacher in the states before we moved to Paris). 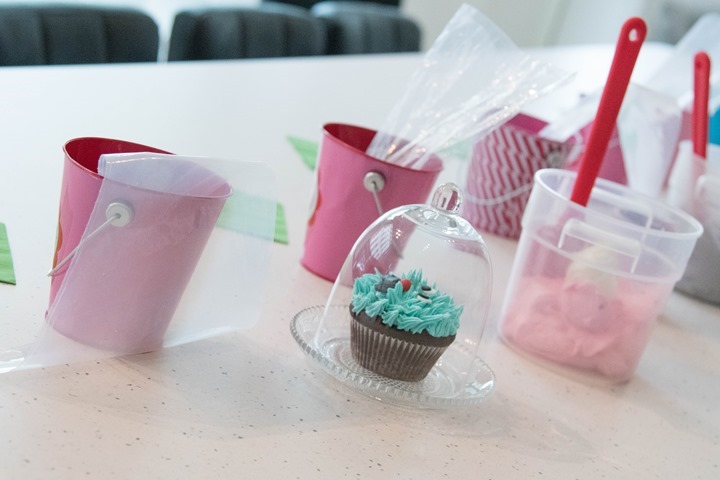 On top of that, she had done a full cake as well as some mini-cupcakes too. 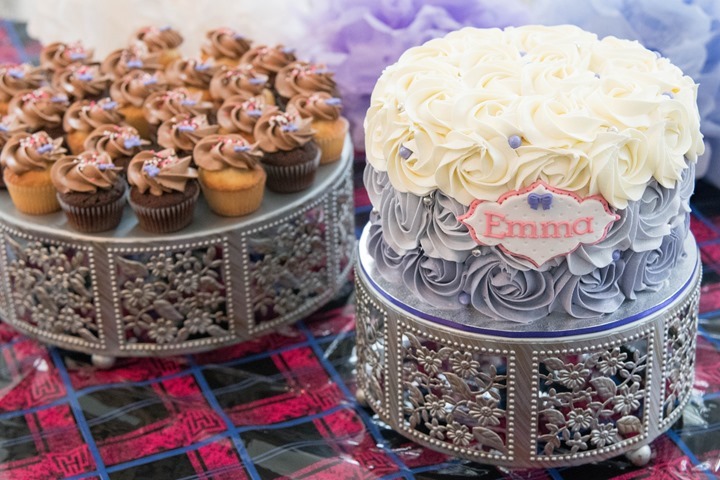 She created a few more simple sample cupcakes, which would be what the kids would use as inspiration for their own little creations.  The theme of the party was Monster High.  I even created a Monster High Spotify list…which…will invariably confuse my recommended songs for some time to come. 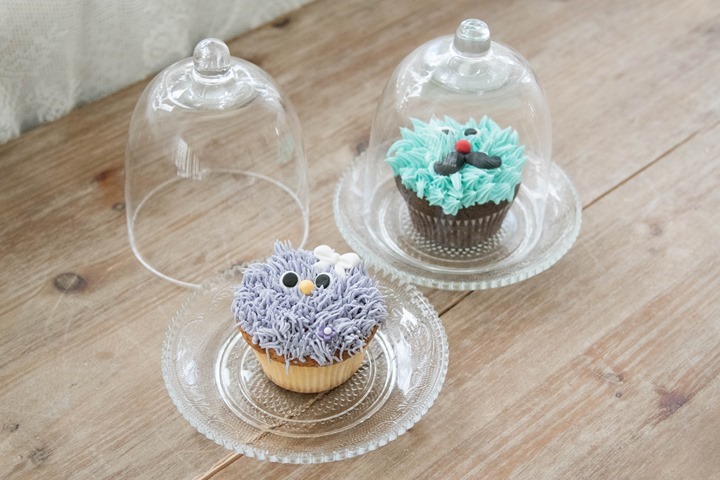 As for the end-creations?  The kids each took home a box of two cupcakes.  Here’s a sample of a few of them, ready to take home: 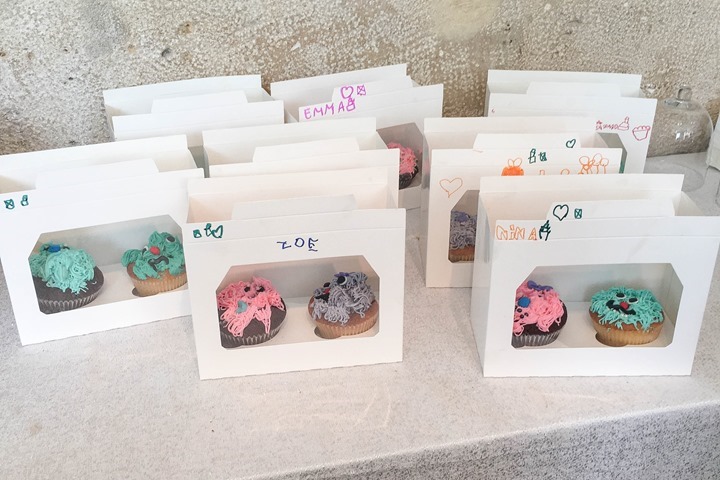 5) Openwater swimming at the lake 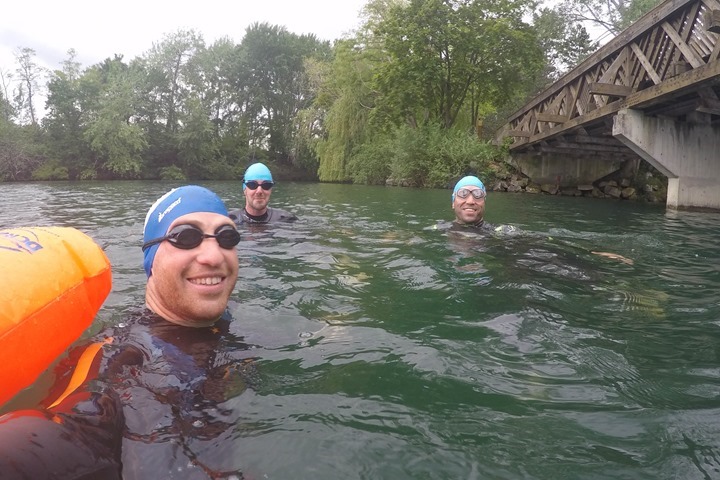 Finally, on Sunday we headed up to the lake to go for an openwater swim with a few of our friends.  We did about 2,000m or so, just a simple out and back. 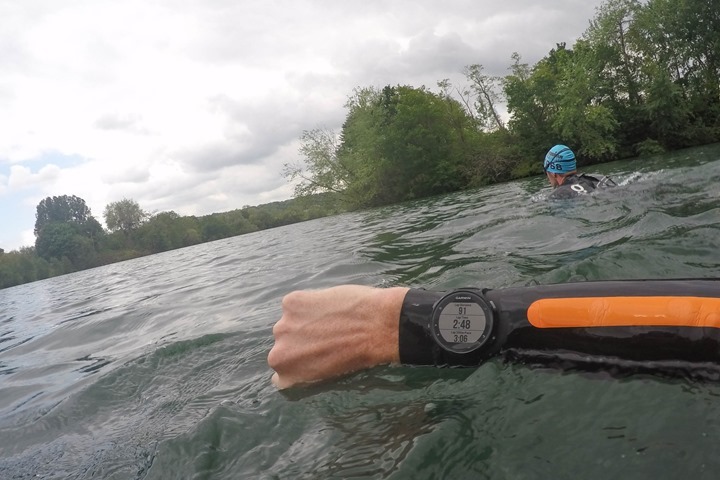 It would be the first openwater swim for me with the FR735XT.  Since the unit will automatically disable the optical HR sensor during swimming, I went ahead and connected it to the HRM-TRI, so I could download HR data afterwards.

Seemed to work just fine.  The only annoyance was that I didn’t realize a 500y auto-lap was enabled, and I can’t seem to find any obvious way to disable any auto-lap settings once the activity starts (unlike other watches).  I had the same problem during my run as well on Saturday (1-mile auto-lap enabled by default). Somewhat frustrating.

Afterwards, we lounged around in the grass and setup a bit of a picnic for a few hours. 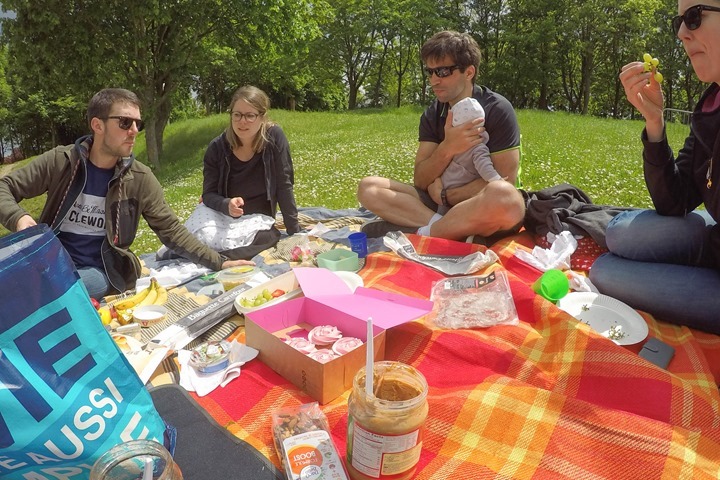 Not too bad a way to end the weekend!