Heads up! I’ve now posted my full A360 In-Depth Review, which can be viewed here!  Enjoy!

Earlier today Polar announced their latest wearable, the A360.  More notably – it marks the first Polar product to include an optical heart rate sensor.  This takes the concept of the existing Polar Loop (and Loop2) and adds in heart rate sensing technology while also including a brilliantly colorful touch screen display.  In many ways, it sorta looks like a Microsoft Band minus the GPS piece.

Now the challenge I’ve got is that I haven’t had any hands-on time with the unit.  As such, I really can’t make any meaningful judgments (or validations).  As is normally the case around here, no hands-on time means no post.  And failing that – just a very short post.  Since y’all sent enough e-mails/tweets/smoke signals over the course of the day that I’ll round-up my initial thinking in this quick post.  Obvious disclaimer: This is not a review.

To begin, the fitness band is not a GPS watch (it lacks GPS), but rather focused on replacing the activity tracker with something a bit more advanced.  By not having GPS it claims a fairly impressive 2 weeks of battery life between charges, far more than competitive units by pretty much every vendor out there.  That number includes 1hr of training per day, but otherwise covering 24/7 tracking of daily activity.  Note that it does omit smart notifications in this 2 week figure, which would undoubtedly decrease battery life once enabled – though to what extent is unclear.

The band itself holds the display/sensor pod, and is changeable down the road with various colored band options coming in January.  The clasp system is more traditional – a solid move away from the messy arts and crafts scissors project that was the Polar Loop band. So that’s much appreciated!

The silicon band comes in three sizes – a small, medium, and large option.  Of which they have a snazzy sizing guide available on their site.  This is pretty much in line with what Fitbit has done.

The display looks pretty darn sharp in pictures, and comes in at 80x160px in size, with a claimed “full color TFT display”.  Most notable is the touch screen piece though.  This can be both good and bad.  We’ve seen many companies attempt to implement brilliantly colored touch screens over the last few years with rather mixed success.  Specifically, around usage with sweat and water.  Sometimes the screens from other products would be unresponsive with just a few drips of sweat, or would become disoriented and confused, seemingly pressing their own buttons as water cascades over them.  It remains to be seen how well Polar has implemented this in wet conditions. 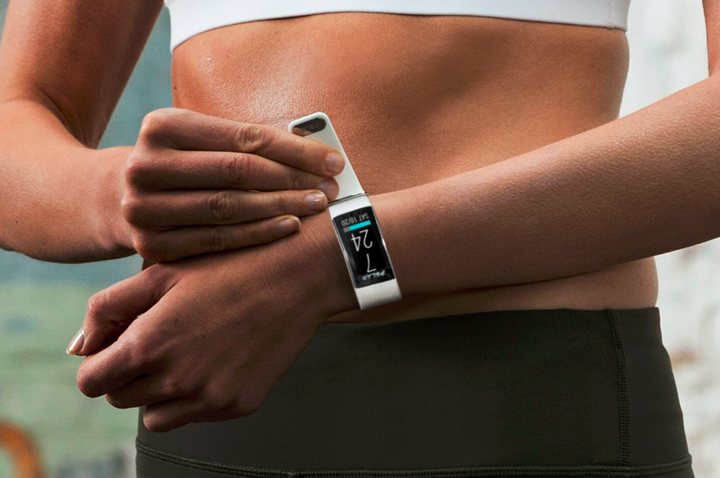 Of course, the biggest news out of Camp Polar is the inclusion of an optical heart rate sensor.  This shouldn’t be any surprise – Polar has hinted at this since CES all the way back in January, and re-affirmed that again at other product launch events throughout the year.  And consistent with that hinting, they followed through on placing the technology first in a more entry-level device, rather than something higher-end like the Polar V800 multi-sport device.  I’d assume this is considered a trial-run for the technology. 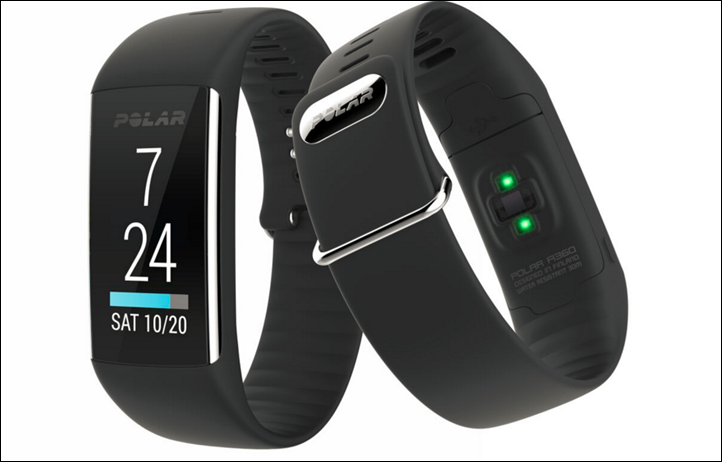 Polar notes that the sensor is fully made in-house, using their own algorithms.  The unit includes 2 green LED’s, and a single photodiode.  That particular configuration is fairly common among many optical sensor products today.  However, it’s not as common among the more sport-oriented ones, which tend to use two different LED color sets, which typically increase compatibility with certain skin tones (darker ones).  Usually that additional LED results in a green or red LED being part of a 3-LED set.  Which doesn’t mean that Polar did anything wrong, but it’s an area I’ll be paying close attention to in the review cycle. 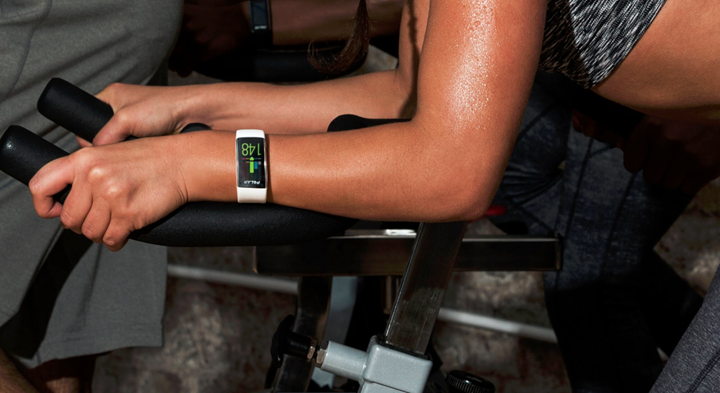 The unit charges via a micro-USB connector, something I’m honestly a bit surprised Polar went with.  On one hand it’s great to match a standard (versus a wonky proprietary connector). They initially did so pioneering a heavily internally waterproofed version good to 50m back on the Polar M400.  With the A360, they attained 30m waterproofing. However, I’ve seen a slightly higher level of waterproofing/corrosion related complaints with the M400 as the product has aged.  It’s quite possible that Polar has since addressed issues (it was two years since that technology first introduced itself in the M400), but it’s something that may be hard to quantify in any short-term reviews.

As expected, you can also sync via Bluetooth Smart to both Android and iOS devices.  In doing so you’ll get the smartphone alerts and notifications from the notification centers on both platforms.  That means things like text messages, e-mail alerts and Twitter notifications.

That same smartphone channel is used to funnel activity tracking stats like steps, calories, and daily sleep metrics to your phone and ultimately the Polar Flow website.

Note that the A360 does NOT track your heart rate 24×7.  Rather, only during a specific workout will the heart rate sensor be enabled.  The unit otherwise has onboard storage for 60 hours of training (with heart rate data).

Like most of Polar’s products, it includes integration with their Smart Coaching functionality, which includes features such as Training Benefit and the ability to enable sport profiles.  This is notable as many other products on the market don’t actually do calorie based sport profiles, but just have generic ones for a handful of sports (i.e. just walk or run). 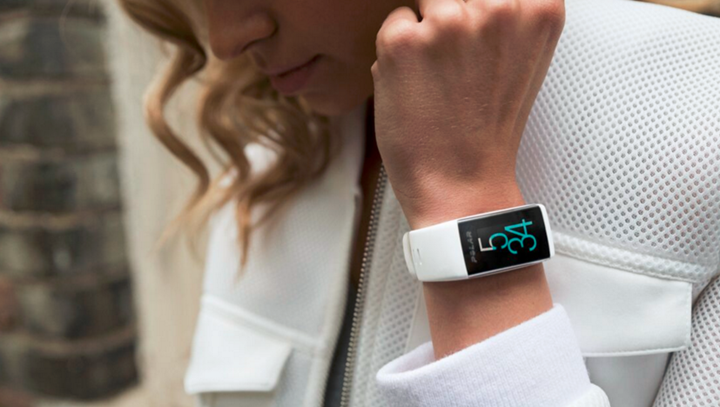 Priced at $199/€199, it might be a smidgen high in price given the lack of GPS.  The closest comparison would be the Fitbit Charge HR (for optical sensor band) or the Microsoft Band (for the display & optical sensor, but that has GPS whereas the A360 doesn’t).  So it somewhat sits in between those two products in terms of functionality and price.  With the Fitbit Charge HR it does 24×7 optical HR tracking at a lower price, but lacks all of the advanced display and notification pieces that the Polar A360 has.  Further, the Fitbit Charge HR isn’t as well waterproofed as the Polar A360, nor does it have any of the coaching and true workout features.

Overall, here’s the key things I’ll be looking at once I actually get my hands on a unit as part of a review cycle:

A) How functional is the touch screen when wet (both rain and sweat)?
B) How accurate is the heart rate sensor?
C) What is the actual battery life like?  Especially with notifications enabled.
D) Are there any issues with the micro-USB connector and waterproofing?

As I’ve noted often recently (and will continue to note over the next few days & weeks) – for new devices in this space that are using unknown optical sensors, I’m roughly taking a ‘guilty until proven innocent’ approach.  By that I mean that there are so many companies trying to roll their own optical sensors (and failing) that I’m simply assuming they haven’t gotten it right and will have to prove accuracy.

That said, in Polar’s case their entire lineage is based on accurate heart rate sensing.  I feel that if they miss the boat on the accuracy piece with their first optical sensing product – it’ll significantly set back consumer confidence quite a bit for future optical sensor products.  So hopefully it’ll work out.  Either way – we’ll know soon, as the company plans to start shipping devices in November.

(Note: All photos here from Polar)

Update – support the site! Found what you read above useful?  If so – then you can support the site here by ordering the Polar A360 via Clever Training.  They’re accepting orders for the unit, which Polar says should start shipping as soon as Monday, November 9th.  In addition, by being a DCR reader you can save 10% on your cart with coupon code DCR10MHD (and free US shipping)!
Share
Tweet
Share
0 Shares
Tags: Optical HR, Polar, Polar A360