This is our third year racing the annual Santa 10K event just on the edge of Paris.  It has half a dozen different start waves over the course of the morning, from kids races to drop-dead serious racing of elites.  But in the middle of it all is 10,000 Santas running around.  Which…is where you’d find us.

I swung over mid-day on Saturday to pickup our race packets.  We’ve got the packet pickup process down to a highly efficient run in and out affair at this point, though, I was slightly thrown for a loop by what was included in the packets: 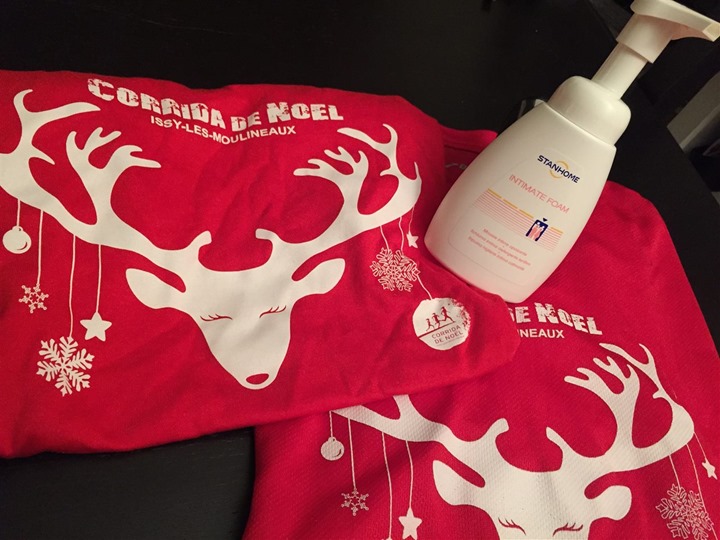 That there is a rather large bottle of ‘Intimate Foam’.  I’ll let your Google skills do the explaining for you.

The next morning, at a rather relaxing 10:15AM, we showed up at the race site.  The race didn’t start till 10:50AM, so our arrival was in the middle of the kids race: 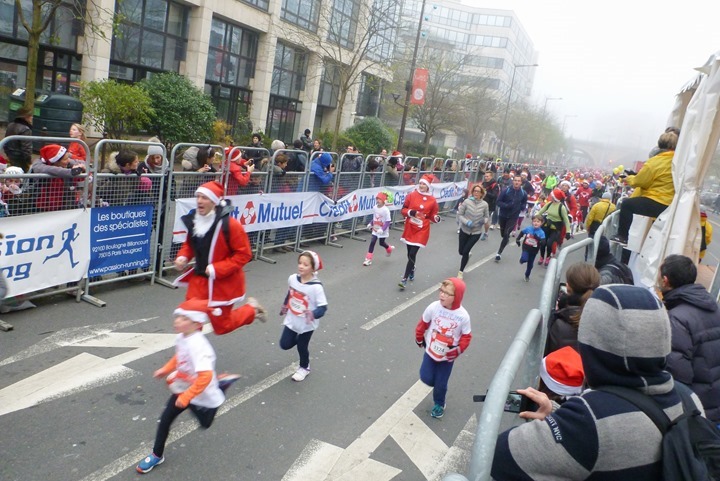 We headed over to the gym a few hundred meters away to drop-off our bags and extra warm clothes. 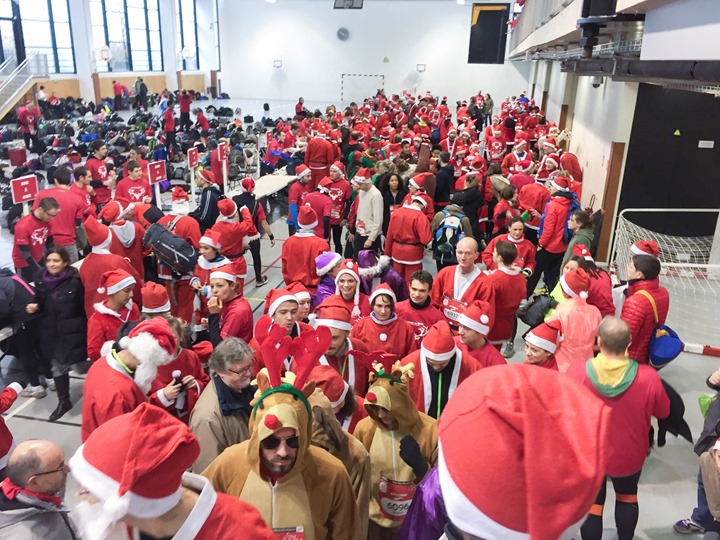 Half of the gym was for bags, and the other half to change/etc… As is often common here, we saw some folks post-race simply take it all off on the basketball free-throw line.  I decided against making a nude Santa photo album of the sights. 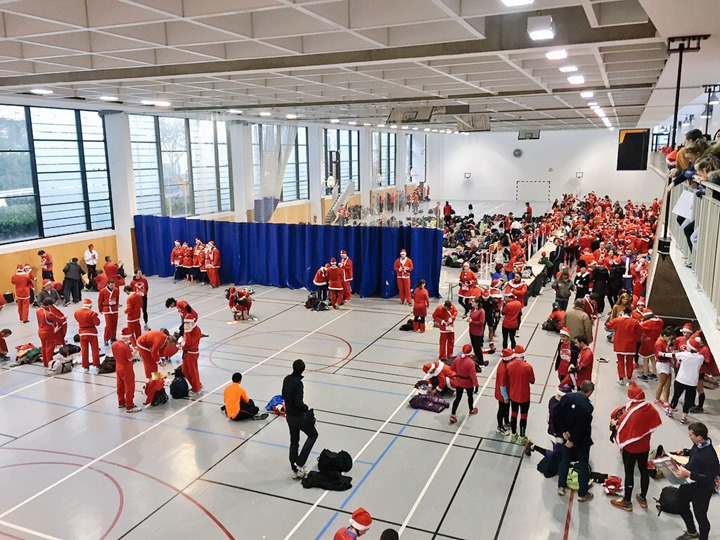 The only problem, like years past, is the lack of bathrooms.  Inside the gym there’s only two single-person bathrooms.  That’s not enough for 10,000 Santas.  So as a result, many went down the street to nearby shrubs and bush congregations.  For the shrubbery that I spent quality time with this morning, I am dearly sorry.  May you make a full recovery. 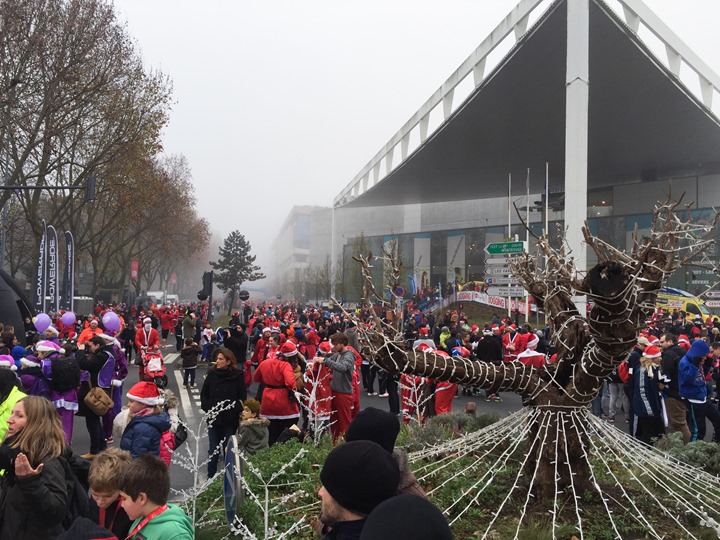 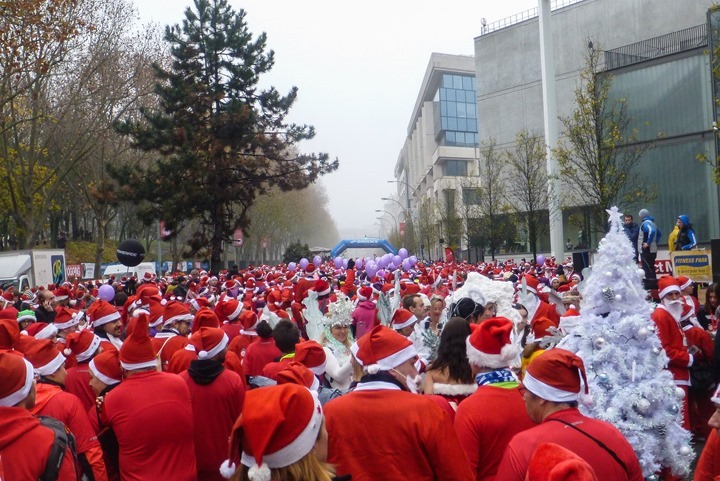 With pre-race business complete, it was off to find the front of the race, this is what it looked like from a ways back.  A very long ways back.

Thankfully there’s a side access road to get to the front, and upon making it to the forward starting area I quickly stumbled into the Expatriés Triathlon Paris team taking a group selfie: 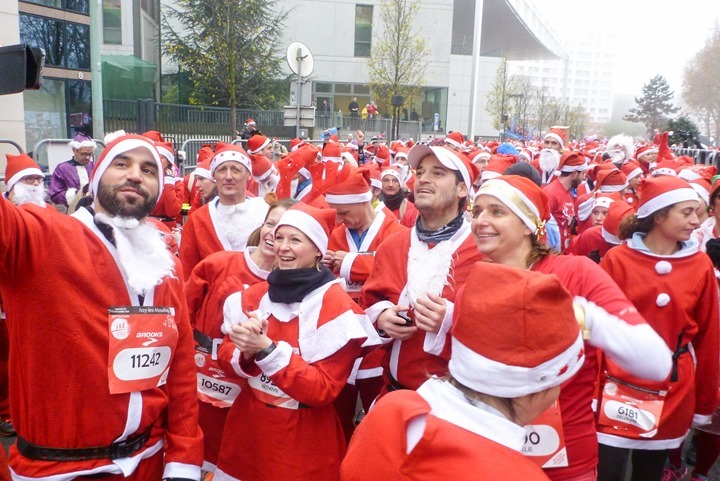 Not to be outdone, I grabbed a photo of the other 9,994+ Santas out there looking back.  It is amazing how many people are smiling.  Sometimes I’ll take a photo like this and there will be a random grumpy cat looking straight into the camera with the death stare.  Not this time! 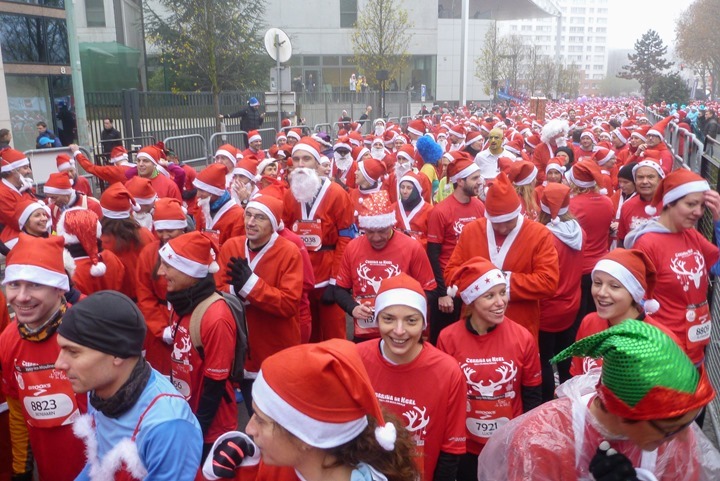 As is par for the course for French races, start countdown announcements are kept to a minimum and with little fanfare we were off! 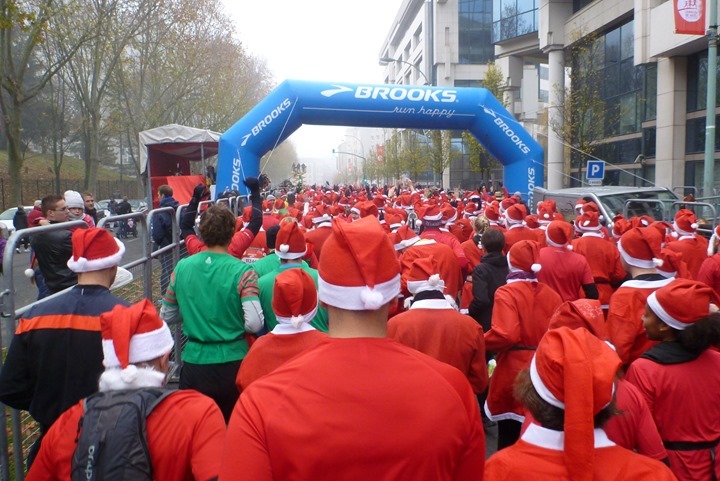 As one might guess though by the above photo, I probably started back a bit further than I should have, since I had probably 300-500 Santas in front of me to weave around.

While I did that – one Santa was delivering snow to the streets of Paris.  In a purple Tuk-Tuk truck of course. 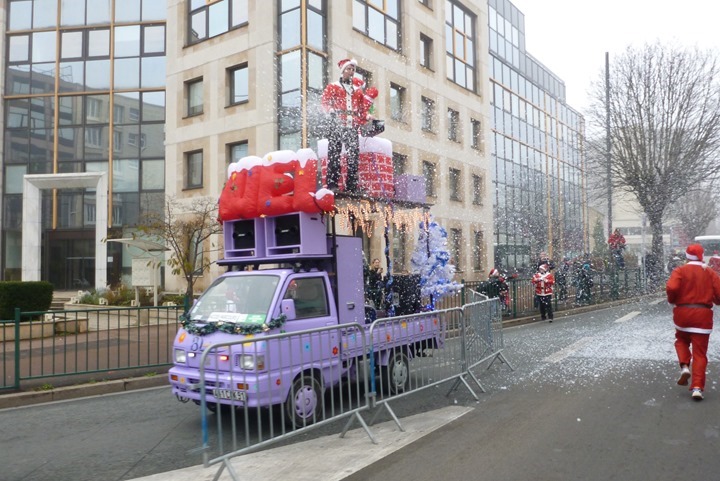 After 1-2 minutes the crowds broke a bit and I was able to play dodge and weave pretty efficiently.  This includes passing everyone from Santa to reindeer. 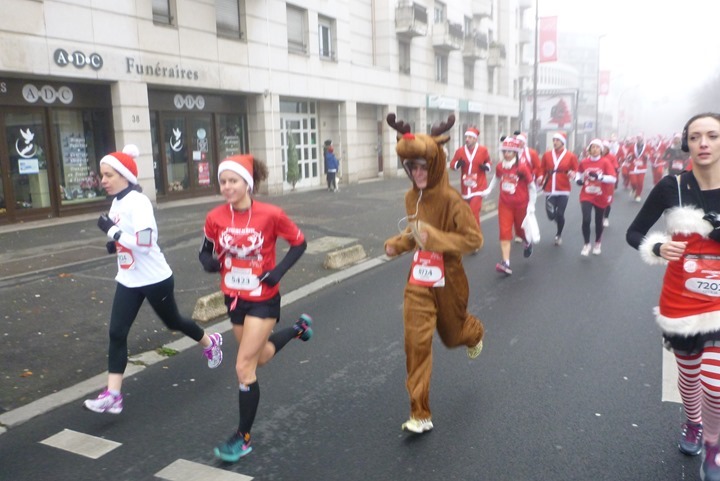 I cleared the first mile in slowly under 7 minutes, way slower than I would have preferred, but red suited traffic held me up.  Thankfully, from there on out I was able to control my destiny fairly well. 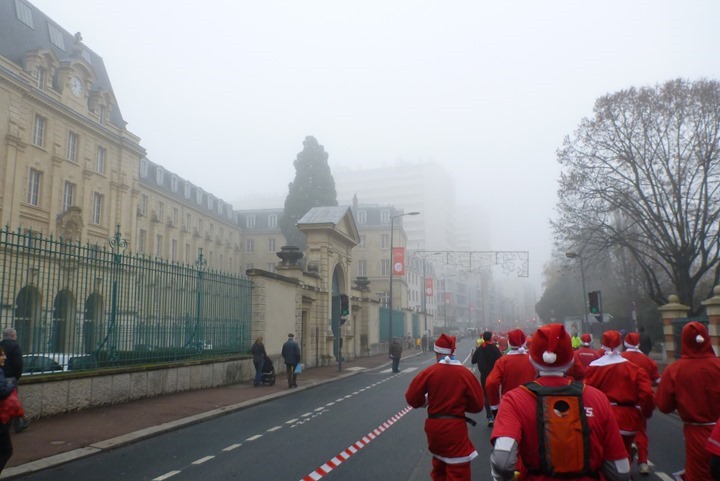 By around the 3KM or so mark, the crowds really start to dissipate rather fast.  Like energetic teenagers on the first 150m of your local 5K turkey trot, people quickly realize the race is longer than a loop around the track. 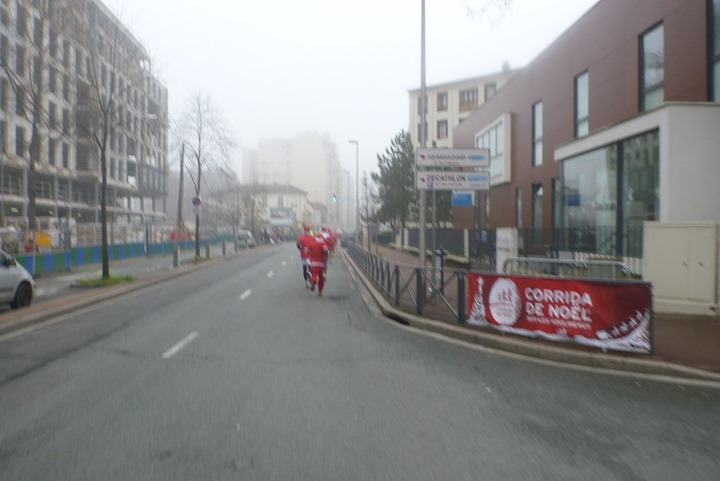 And soon, I was all by myself.  Well, I think there’s one lone Santa way up there. 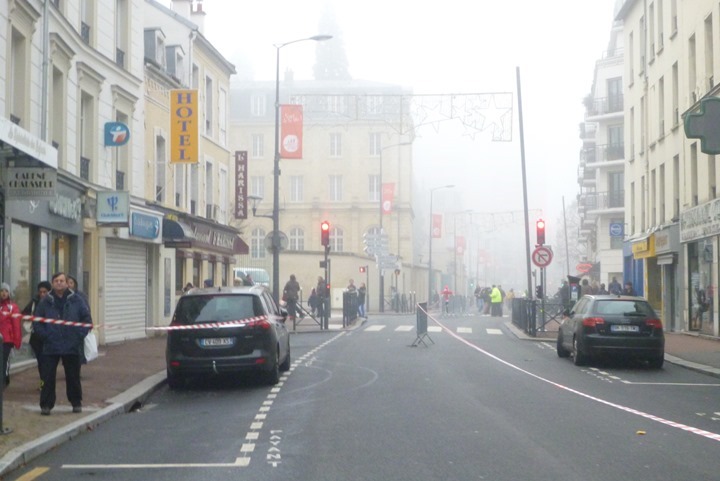 This year they changed up the course.  It’s a two loop course, but for 2014 they tweaked the first loop to avoid the large mountain of a hill in the middle of it.  They also made it so that the loops were slightly offset, so for the most part you shared no portions of the course, avoiding issues where the front of the pack runs into the back of the pack (as I did last year).

Unfortunately, on the second loop, I found the hill: 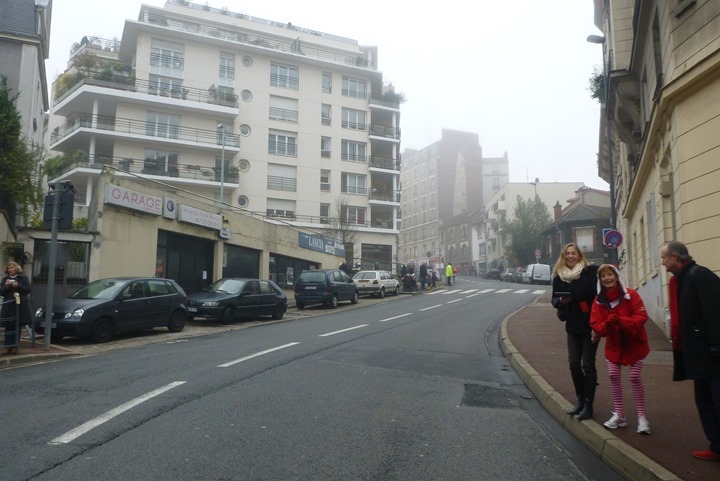 Like years past, this hill really sucks.  A lot.  I haven’t done any hill repeats this fall, and the result of that made this steep mountain climbing experience rather  painful.

I think the climb lasts about 2 or so minutes, just enough to put a very solid dent in your pace.  Thankfully, soon I was zipping back down the other side, towards a gigantic tribal merge with the first lap folks. 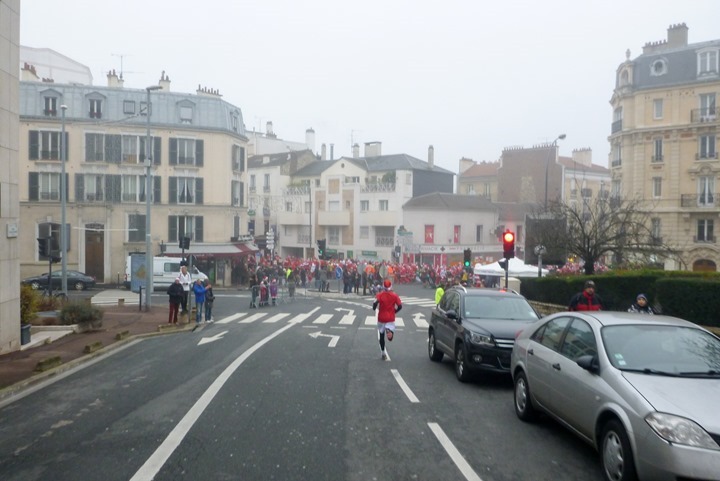 The good news is that with the new course design, people largely stayed on the correct side for this perhaps 500m ‘shared’ stretch.  It probably wasn’t really big enough for the first loopers, but, it kept me from getting caught up in traffic again. 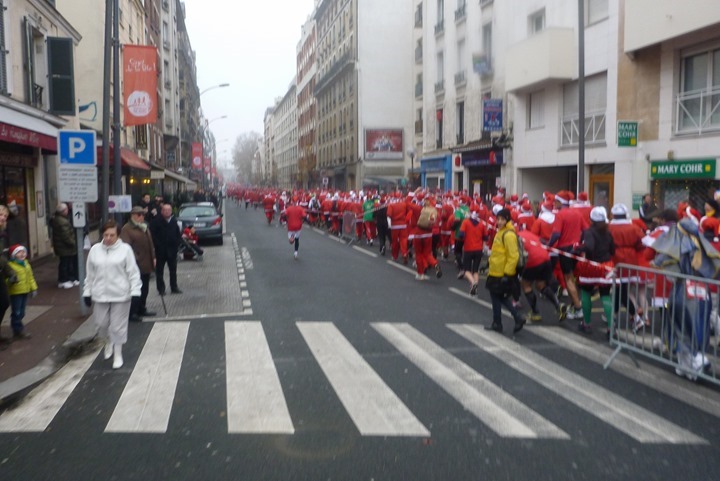 From there it was flat ground as I zigzagged around various city blocks burning kilometers until the finishers chute – which, was better protected than any Tour de France finishers line area I’ve seen. 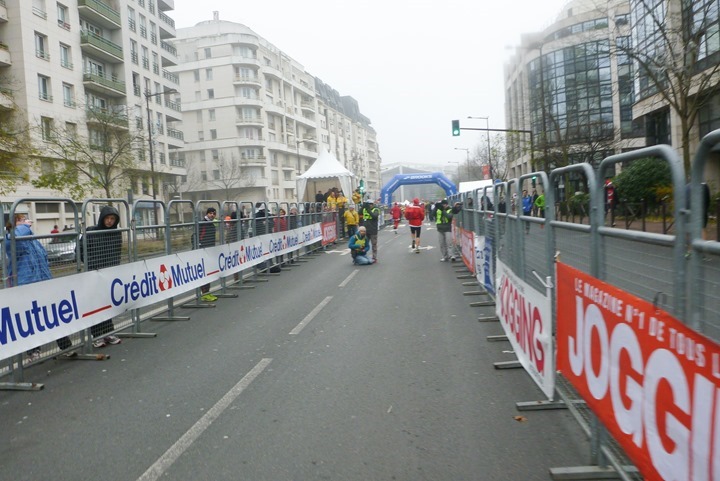 My pacing was fairly even over the course of the run, though, I definitely lacked a bit of energy on the race.  Probably should have eaten a bit more in the morning.  Come to think of it, I don’t think I ate anything. :-/ 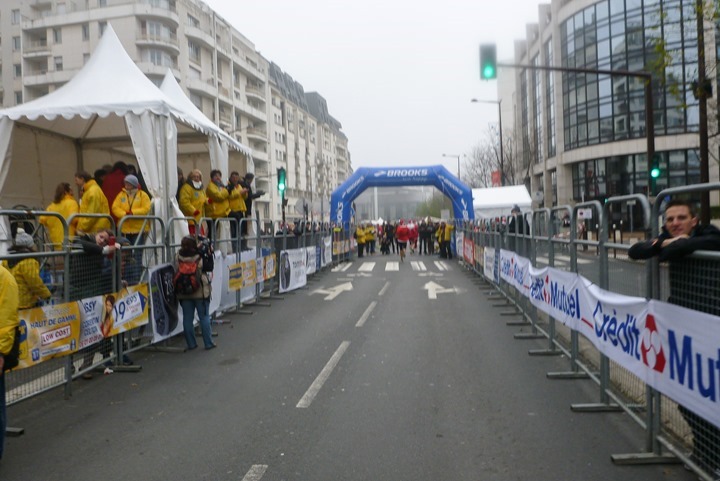 I finished in 36:34, which, is a new PR for me.  At least, in the 9.5KM race division.  For reasons that are highly unclear to me, they shortened the course this year year to 9.5KM, from the internationally adopted 10KM standard for…10KM races.  It’s odd because I can certainly think of places they could have easily routed a different block to get closer to 10KM.

I figure this would have put me on target for roughly a 40-minute finish time for a regular 10KM, perhaps a few seconds under with the right finishing push.  Hard to say.  I’ll take it though. 🙂 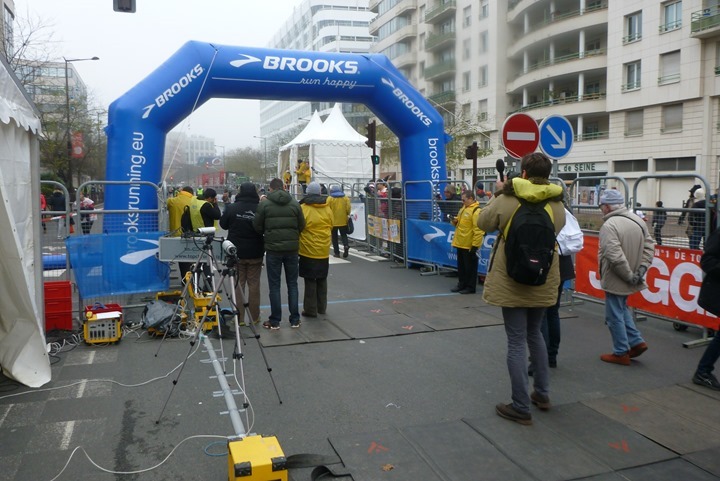 After crossing the line, I swung by the various refreshment tables to check out the goods.  Orange slices, some sports drinks, and some fruity drink/sauce thingy. 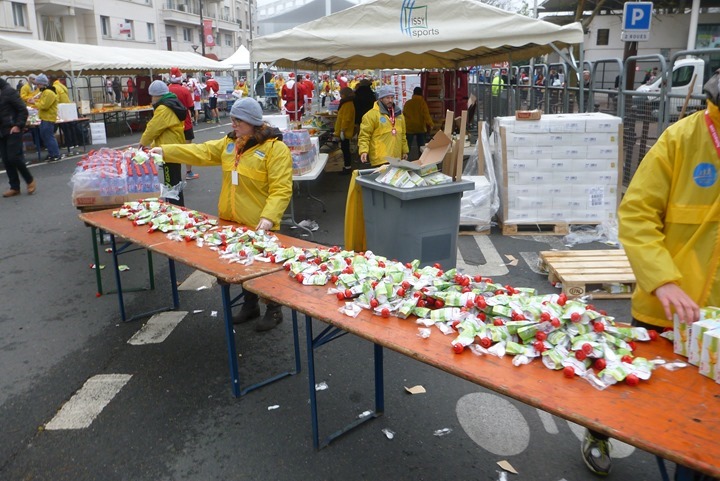 After that I headed past the medal rack to pickup my hardware.  They changed both the medals and the t-shirt designs this year.  Very nice! 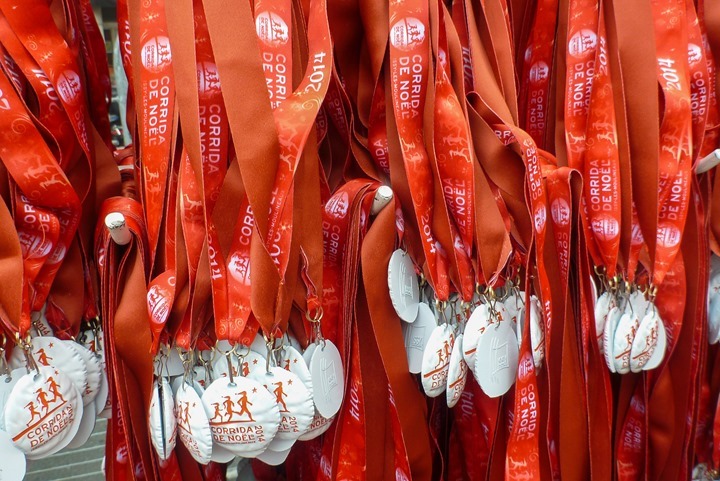 After exiting the finishers chute I backtracked along the course a few hundred meters up from the finish line to watch friends run past.  First up was the president of the expat tri club, Nick, along with a few others, though all but Nick came out blurry. :-/ 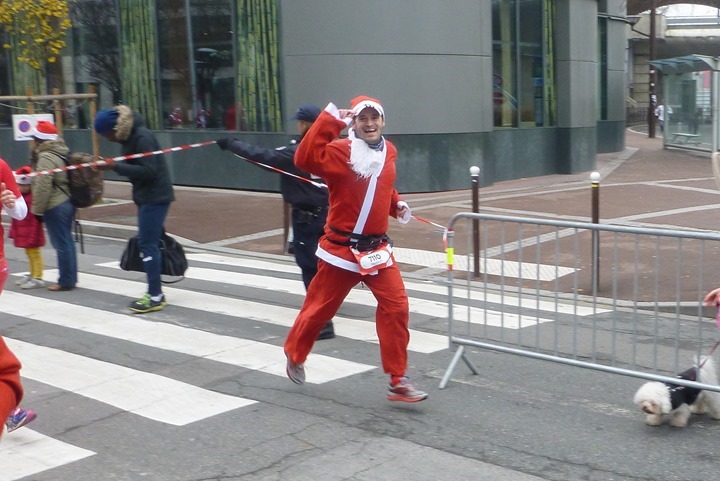 There were also a number of charity groups that were running together carrying disabled children in a sled, like reindeer.  Pretty impressive, and the kids all looked thrilled. 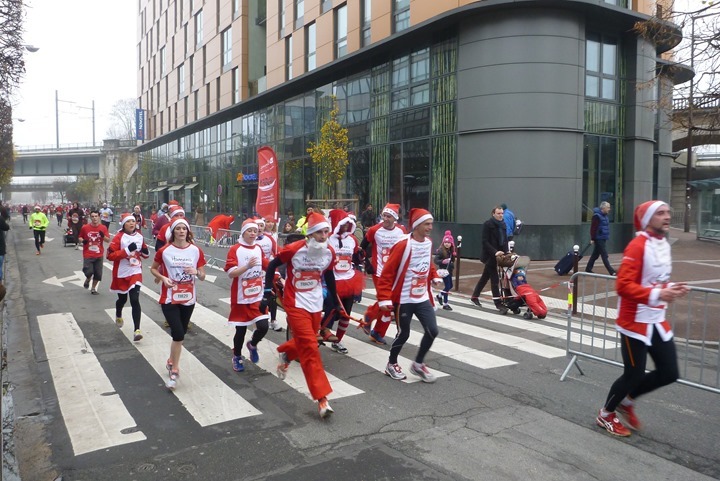 Or, just the occasional Dad imitating reindeer as well: 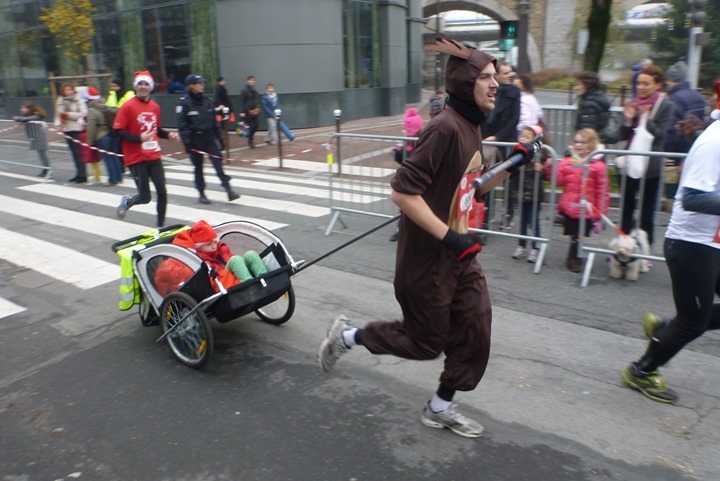 It wasn’t just limited to Santa Claus costumes, as noted above, but also Frosty and his Christmas trees.  Plus, whatever the man in the middle is dressed as. 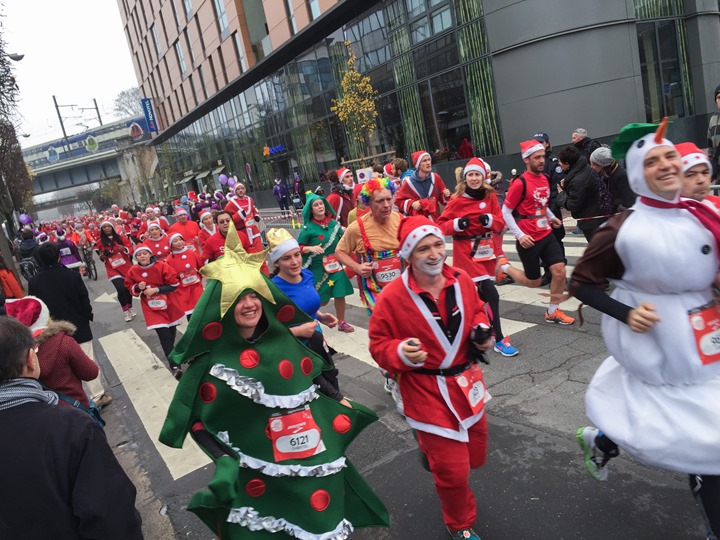 A bit later The Girl came by.  She was running with a bunch of our friends, and by the looks of it – they were having quite an entertaining time.  It’s funny just looking at all the facial expressions in this photo.

At the very bottom you have pure concentration on the finish line some 50-75 meters ahead.  At the upper right you have what appears to be a duel going down between the two women.  Right behind The Girl there’s an incredibly excited women.  It’s as if someone just told her she won the lottery.  Good times. 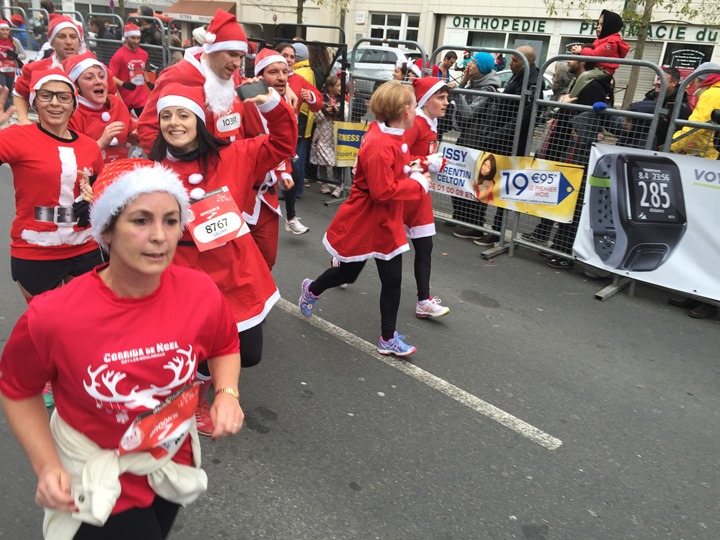 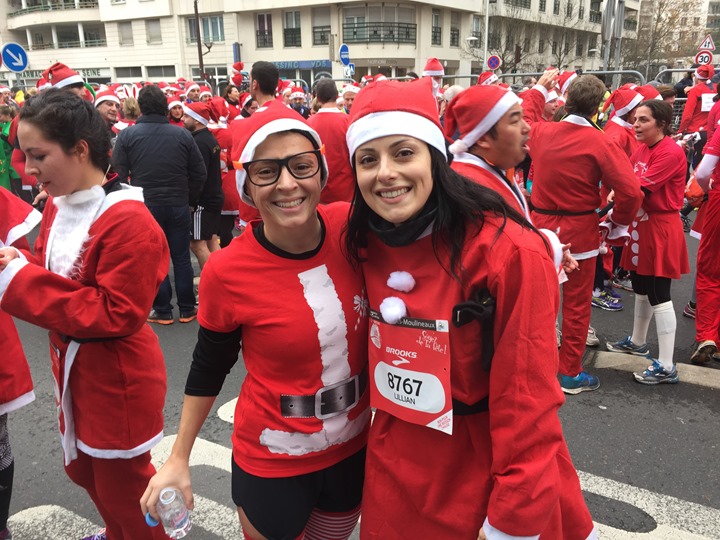 Of course, they then had to work their way through the finish line wait for orange slices.  It’s awesome seeing the ‘steam’ arise from the crowd into the cold air. 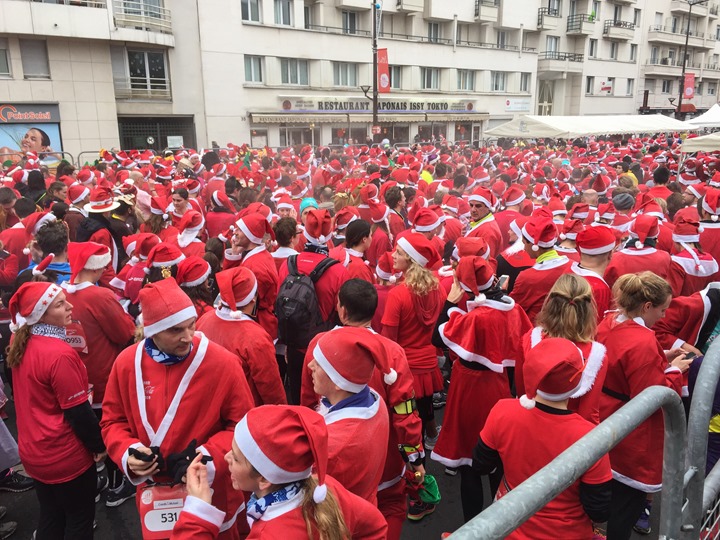 With the finish complete, we unfortunately had to leave our friends and rush across town to another event, and then me off to the airport.  Hopefully though, we’ll be able to sucker them though into further races around the city….