Here’s a look at a bit of a getaway weekend we just wrapped up, which, didn’t quite start off on the right foot.

1) Got stuck in an elevator

I had just finished picking up our rental car for the weekend, an activity that in and of itself was already a multi-hour failboat with our original rental car place deciding to simply close early for the weekend – leaving us without reserved car.  Thanks Hertz.

So, I turned to my man over at a nearby Avis, and he hooked us up for the last minute vehicle.  The only problem was I had to get across town to yet another location to pickup the car.  So by time things were done, I took about a 3hour delay of game.

We had just finished packing the car when I realized that I forgot my coat upstairs.  So I quickly ran back inside and jumped in the elevator up.  We live on the 5th floor.  But that’s euro-style 5th, which really means the 6th floor.  So, an elevator seemed appropriate.

I jumped back into the house, grabbed my coat and got back to the elevator in under the 60-seconds required before it automatically goes back down to the ground floor.  However, one of our neighbors happened to walk out at the same time, so naturally I held the elevator a few seconds so she could get in going down as well.

And all was just fine and dandy…for about 8 seconds.

And then it stopped…in a way that you knew you weren’t going anywhere anytime soon.  In fact, this is what the scene looked like for the next hour: 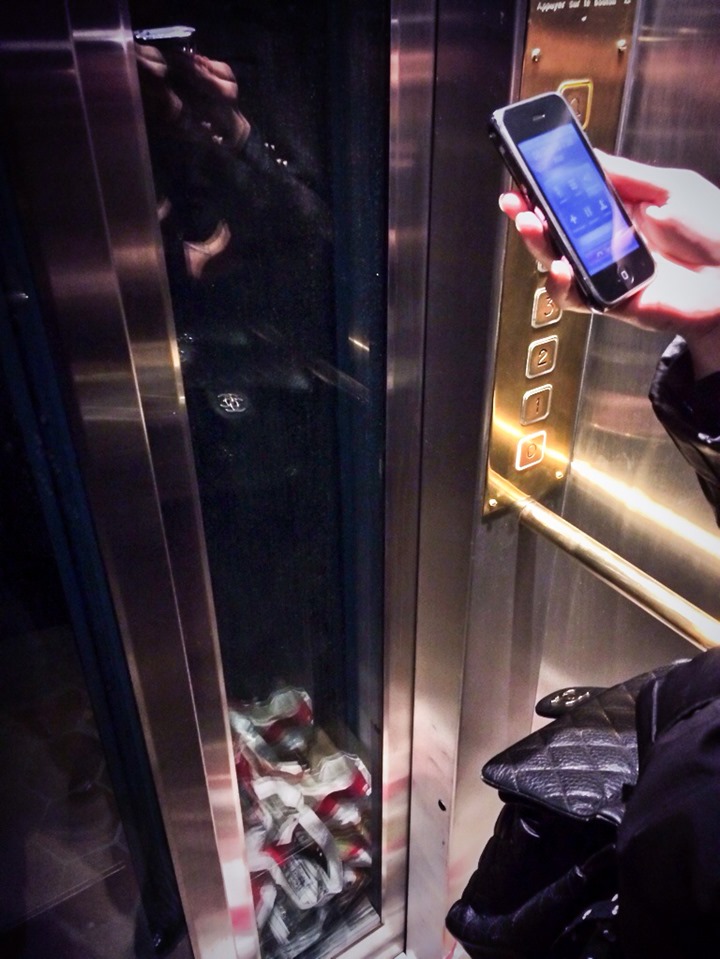 Of course, you might remember this entire thing played out just last weekend as well with out friends getting stuck too.

Eventually the man came with some tool that got the elevator doors opened half-way between floors and then got us out.  There is no ceiling panel on this elevator – so you’re either going out the door or you’re not going out.

Suffice to say, the elevator is not my friend right now.

2) Stayed the weekend at a château

After getting unstuck from said elevator, I was able to re-join our rental car waiting downstairs and get a move on.  We had about a two hour drive south into the Loire Valley.  For better or worse, due to the elevator delay, we hit no traffic.

As we neared the location the GPS turned us off onto a long climbing road with picturesque old school lantern lights hanging above the tree-dense road.  However, nothing quite prepared us for what we saw once we broke out of the clearing: 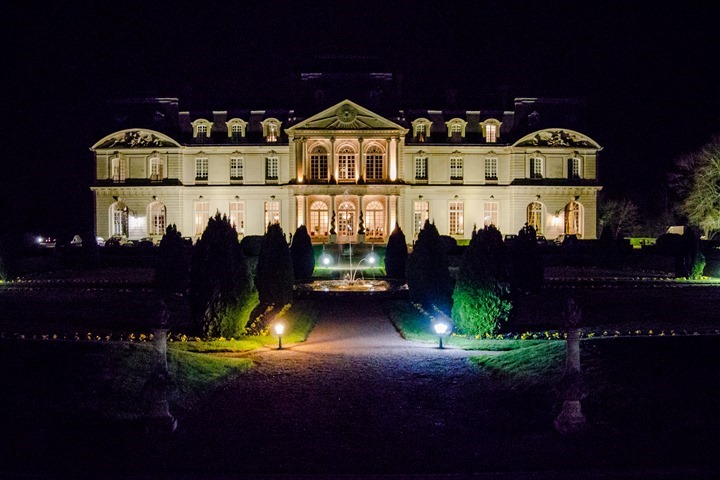 Yup, seriously.  That be our pad for the weekend:  Château d’Artigny

Or rather, one room of it anyway is our pad.

It was astoundingly cheap – about 120€ a night, for a Friday/Saturday night stay.  Especially given they had some big event going on.

Of course, the reality is that there are hundreds (perhaps thousands?) such château in France.  In just the Loire Valley alone there are well over a hundred tourist-friendly buildings.  So you kinda get your pick.  The easiest way we usually search for them is that if you go on Trip Advisor and search for the top ranked hotels in a given region in France, you’ll generally find a château available.  From there, we head over to either Booking.com or Hotels.com to find the best rates.  Usually Booking.com is cheaper, but this time Hotels.com was.

In any case, here’s what it looks like in the day time: 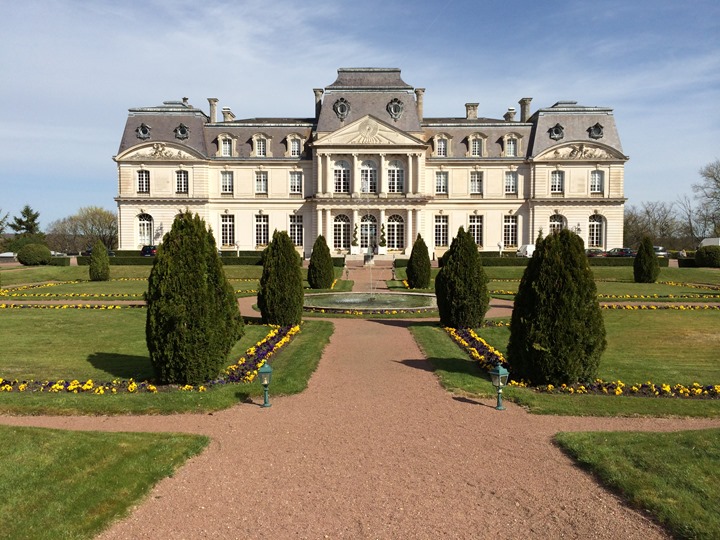 And, from the air: 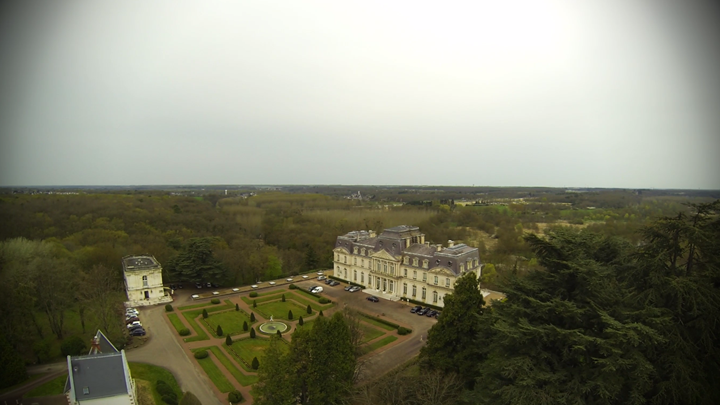 In case you were wondering, I shot the above using the GoPro Hero3 along with the quadcopter I picked up a month or so ago. I was kicking myself though for not taking the shots on Saturday when it was beautiful sunny out, versus Sunday when it was overcast.  I didn’t fly too long and kinda stayed very nearby where I was.  Here’s a short video clip of a couple of other random shots starting with the hotel, and then just beyond the fence-line of another château.   Very short video.

Back to the hotel, the rooms were nice and clean, but perhaps a bit worn in some cases.  The interior was generally quite impressive – kinda what you might expect such a place to look like: 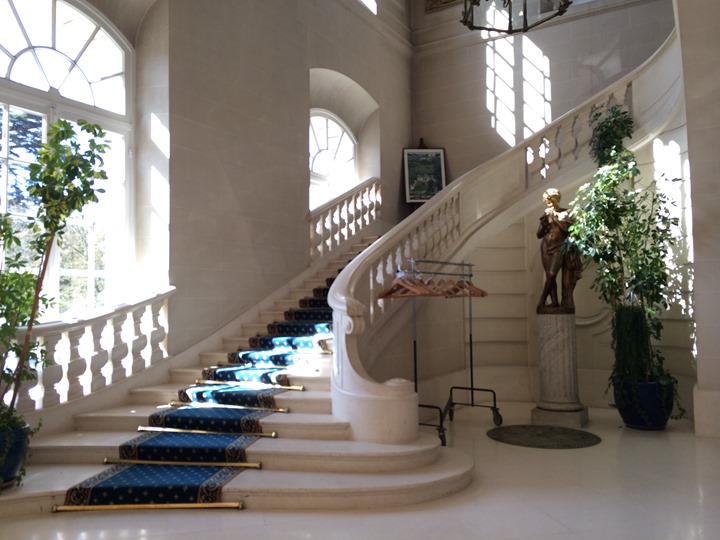 The grounds were massive.  I had asked for an option to run, and they gave me a route fully on the grounds.  I’m guessing you could easily do a 5-8K route in there without repeating.  But, for my 30K route…uhh…that’d be  a lot of loops on trails. 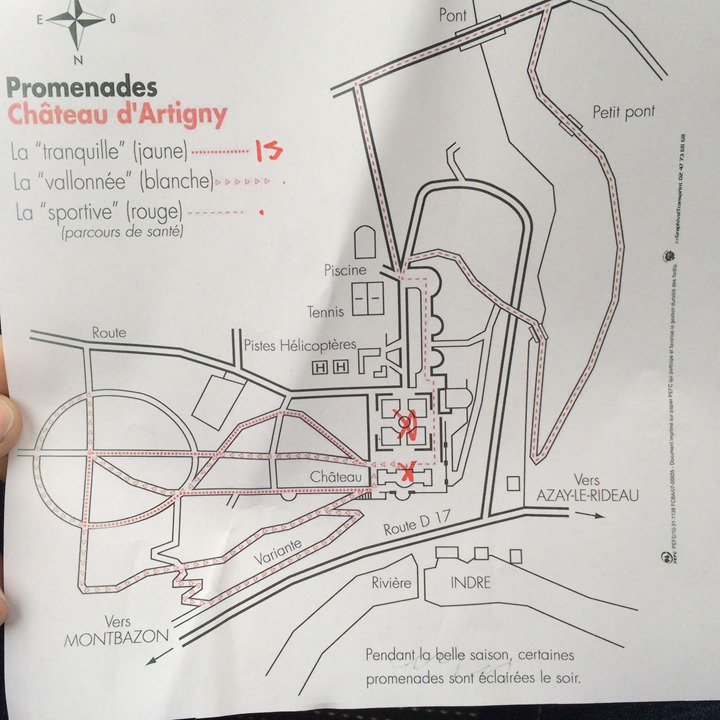 Here’s some of the grounds that we walked on Sunday.  Just really pretty: 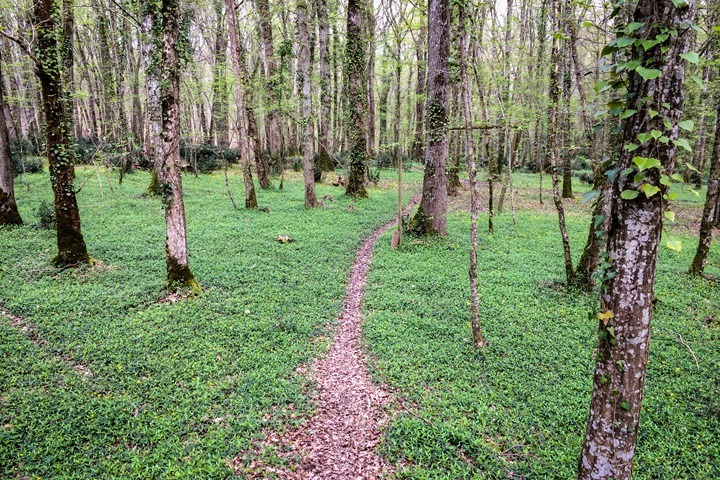 The place also has an outdoor pool, but it doesn’t open for another few weeks.  Interestingly, they have a conference center that you can see in the aerial shot above.  Probably make for a pretty sweet tri camp venue, since there’s an outdoor 50m pool the next town over, and a few ponds/lakes we saw that are probably swimmable with some local knowledge.

Overall, we’d definitely go back there again, especially given how easy it was to get around the rest of the area there.

We spent time on both Saturday and Sunday in the nearby area checking out all sorts of other places.  This time of year is awesome, because there’s pretty much no tourists around.  It’s a touch bit too early for most people’s spring breaks, and far too soon for summer.  The reason above that we booked at the last minute was actually because we wanted nice weather.  And, we got it.  The temps were about 70°F. 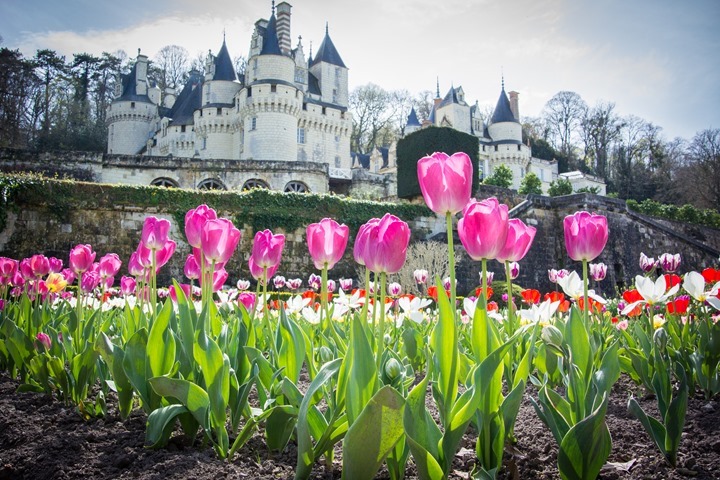 The above château – Château d’Ussé – was awesome.  And it might rank as one of our favorites in terms of being able to see more than just pretty rooms.  You were able to go up into the rafters, and down into the cellar areas below the structure.  Really cool. 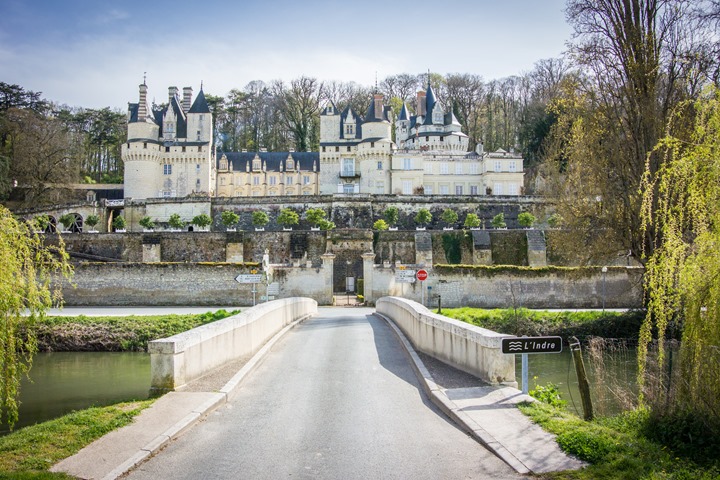 They also had caves and stables as well.  The caves used to be used for wine production and storage. 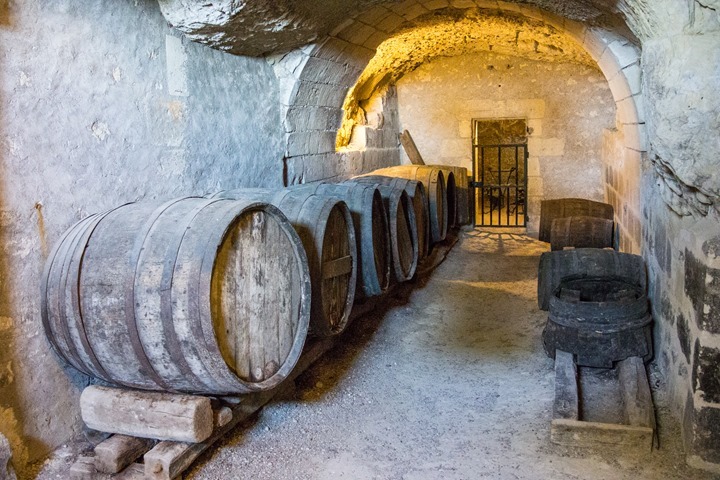 And the gardens were impressive, especially for March.  They had massive piles of bulbs out that they had sorted, that were likely headed into the ground any day now.  I suspect it’s even more impressive in a few months. 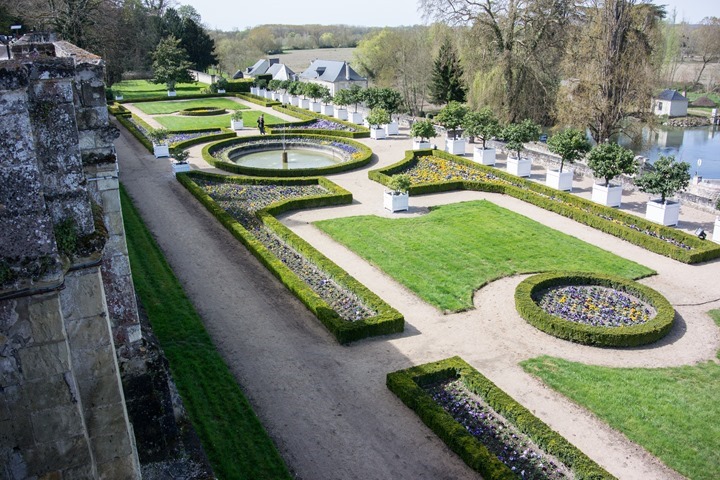 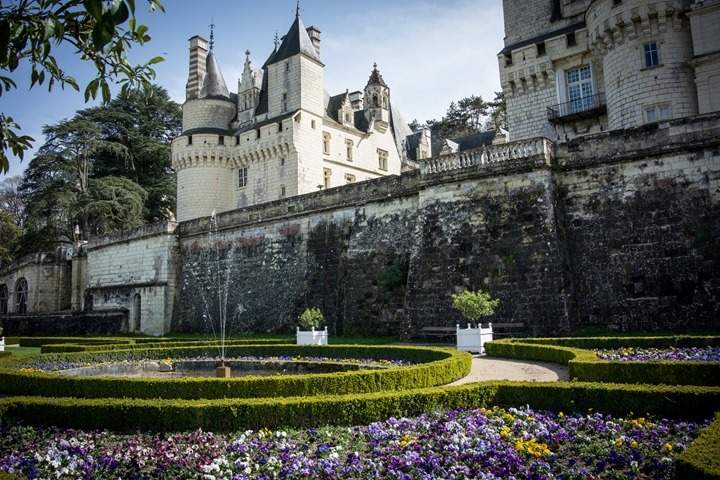 We later headed down into Chinon, another area about a 20-30 minute drive away.  It’s there we grabbed a bunch of fresh goat cheese, prosciutto, and still hot fresh baguettes and sat along the river and ate sandwiches. 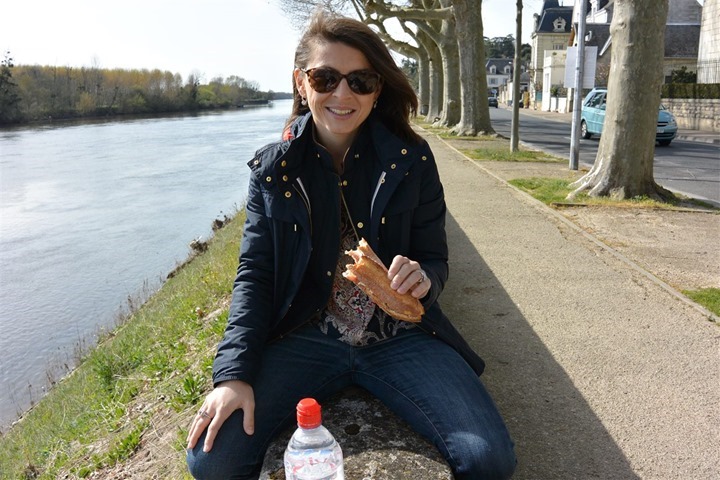 After wandering around all day checking out various other châteaux south of the river, we headed back to ‘our’ château.  It was about 5PM by time we got back, and I made the fastest turnaround ever, quickly back out the door in just about 3-4 minutes ready for my long run.  I left the gardens behind and dropped down along the river for what would be a relatively simple 10-mile out, 10-mile back affair.

Every couple of kilometers I’d run through small towns that sat on the river. 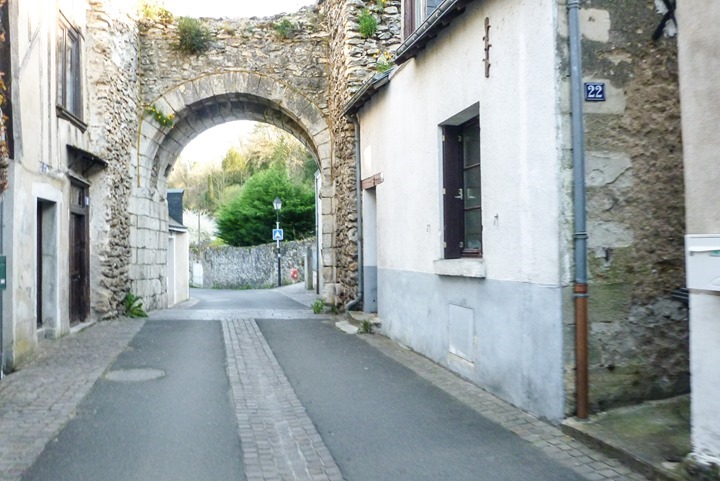 Some of the run was on little side paths like this, and some of it on the roadway.  During the entire run, I only saw one other runner. 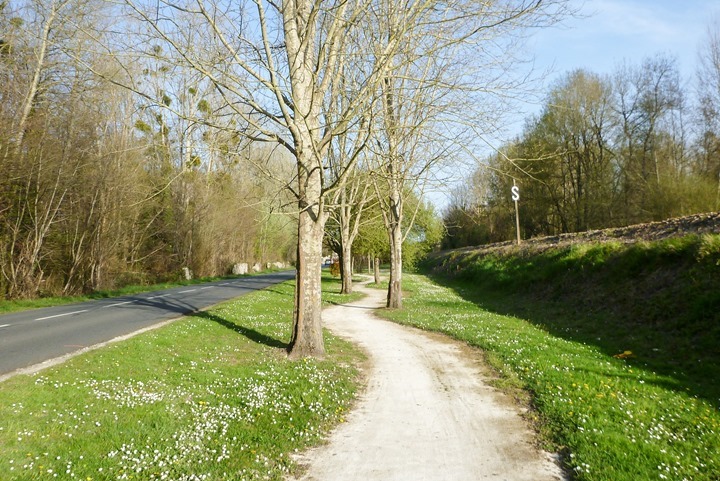 I did however see what looked like remnants of a running or cycling race.  I suspect cycling, since they had crossed off potholes, and usually they don’t bother doing that for runners. 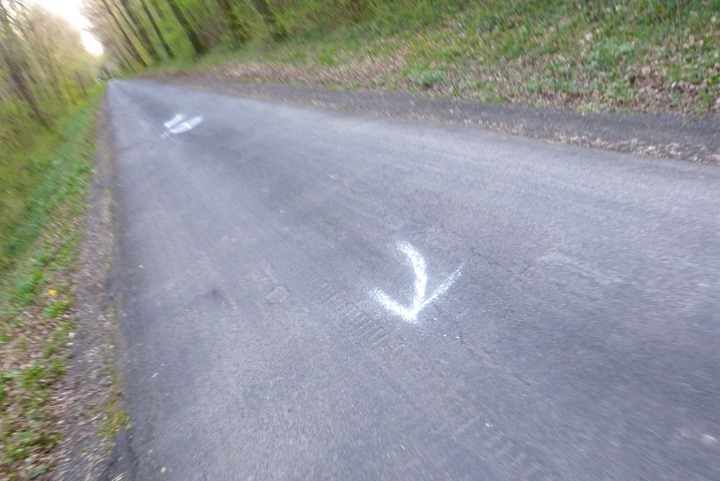 The Loire Valley is world renowned for the cycling (touring mostly), with signs pointing every which way for bike routes.  The Girl and her Dad did a weeklong trip back last year around this time in this area.  I meanwhile simply followed the signs for my running route. 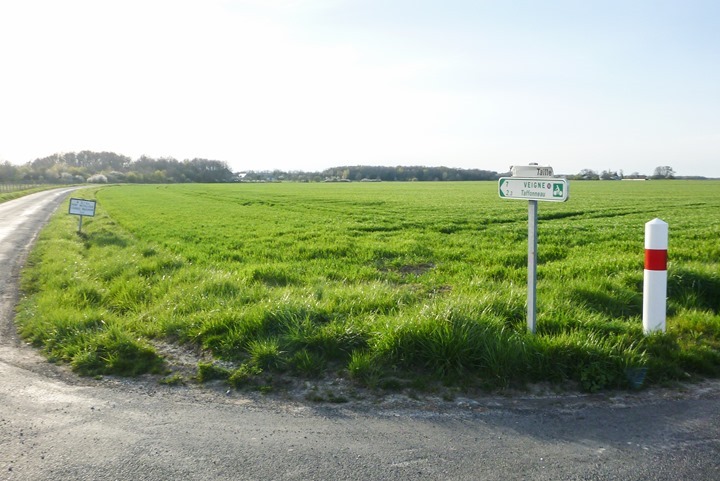 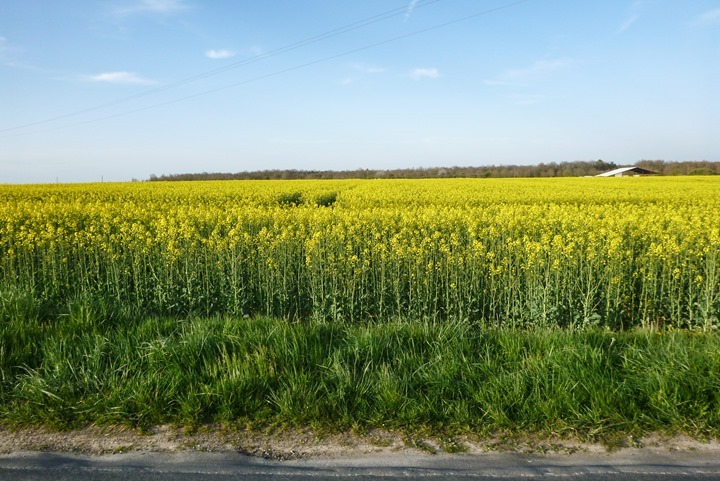 In my packing haste, I sorta forgot to pack nutrition.  So, while picking up baguettes for lunch, I searched and found something similar.  Sorta.  Gummy bear crocodiles.  It did the trick. 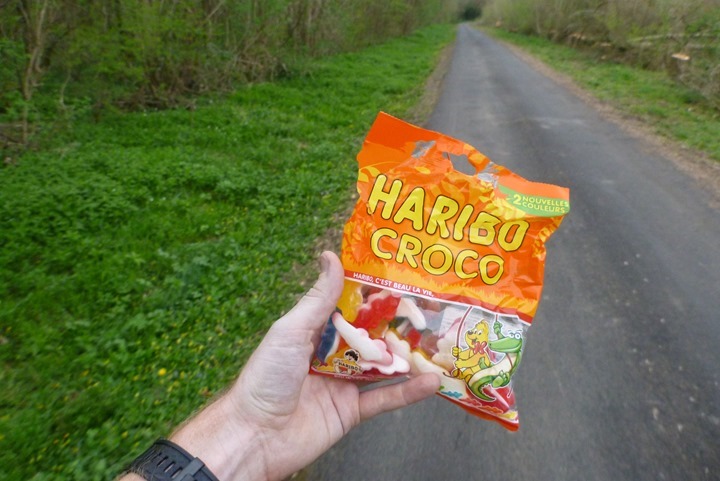 My run was solid, averaging 7:15 across the board, with all miles +/- about 15 seconds (minus the last partial chunk up the steep drive to the hotel). 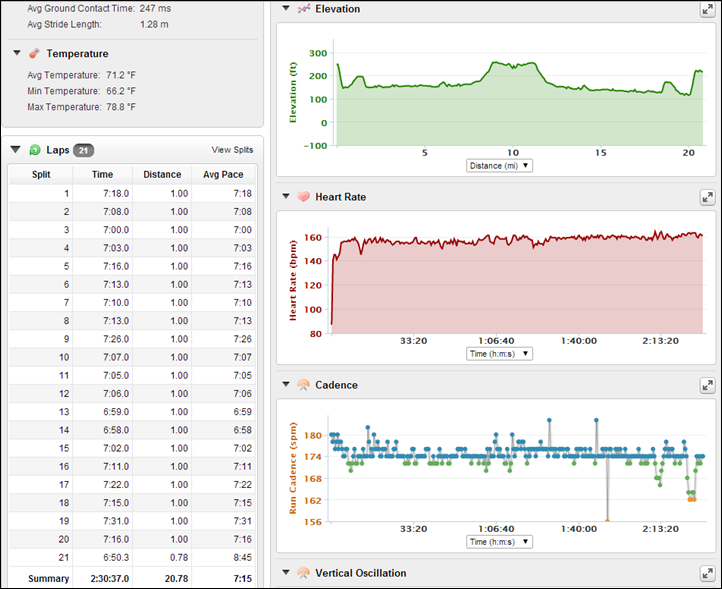 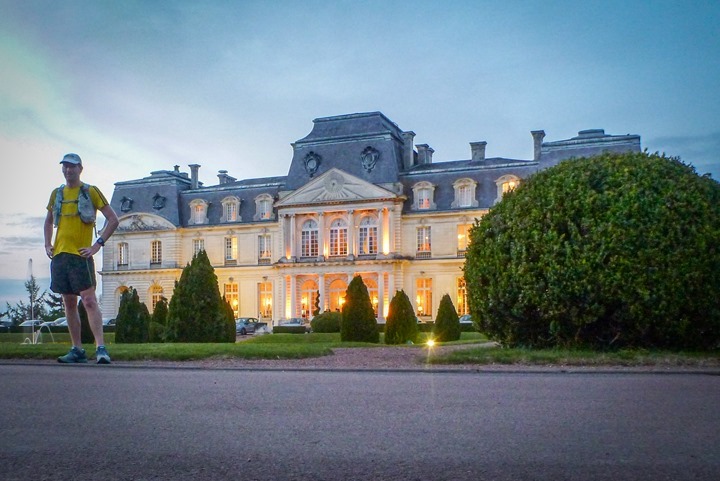 5) Night-ride around the city at midnight 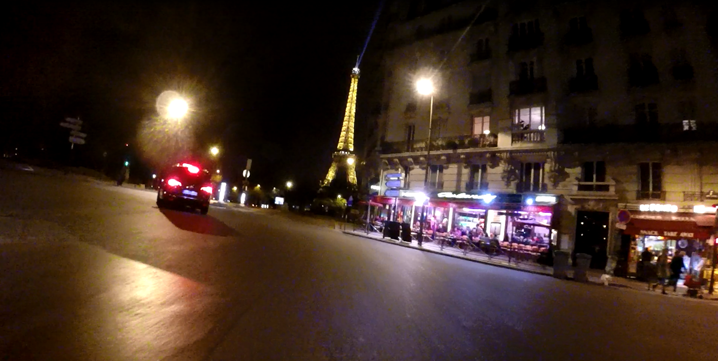 While I had planned to bike down in the Loire Valley on Sunday the weather was never really terribly awesome.  So, I ended up riding much later at night, finishing up a bit after midnight actually.  But really – that’s one of the best times of day to ride in Paris.  Well, that and very early Sunday morning.  Neither have many cars.  I was able to keep pretty high rates of speed with very little traffic.

Plus, the temperature was warm and it was clear of rain (or wet pavement).  A perfect way to finish off the weekend!