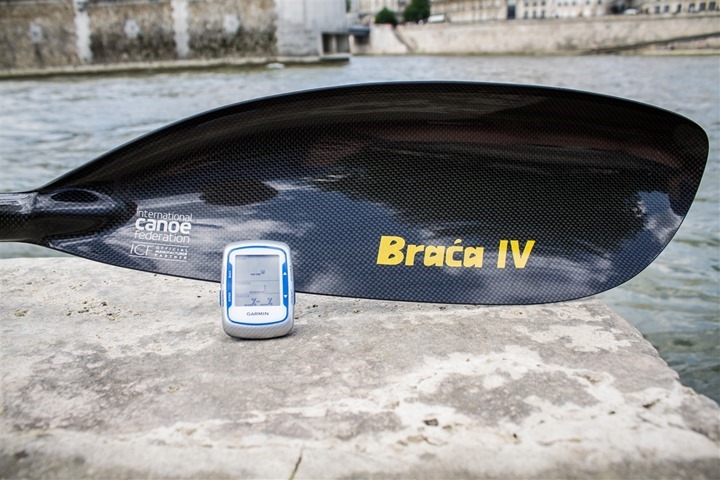 A couple days ago upon returning from China I got the chance to spend a bit of time checking out a new to the market but not new to the sport ANT+ enabled power meter.  The unit operates on much of the same principals as a cycling power meter in terms of how it measures power (strain gauges), how it transmits power (ANT+), and how it displays power (watts).  It even shows left-right power (Power Balance) and stroke rate (cadence) – just like many new power meters.

The simply named ‘Kayak Power Meter’ by a New Zealand company called ‘One Giant Leap’ has actually been in use for well over a year now.  In fact, I originally talked to the company over two years ago when they first were testing out units.  However shortly after our initial discussions the New Zealand National Team (for kayaking) secured exclusive rights to the platform until the conclusion of the Summer 2012 Olympics in London.

As you’ve seen recently with other sports technology products (such as Alphamantis with the Canadian Cycling team), it’s not uncommon for national teams to get exclusive use of up and coming technology prior to major sporting events.

During the lead-up to the games they (the NZ National Team) had a version of the product that allowed them significant analytical capability, but also required a bit more analytical processing power (in terms of human understanding) than you’d want in a general purpose consumer product.

So following the Olympics last summer they’ve revamped the product and focused it more in line with the level of detail that traditional cycling power meters have, and with a similar target audience (amateur and professional competitive athletes).

Given the parallels to cycling, I thought it might be interesting to get a walk-through of how the system works. 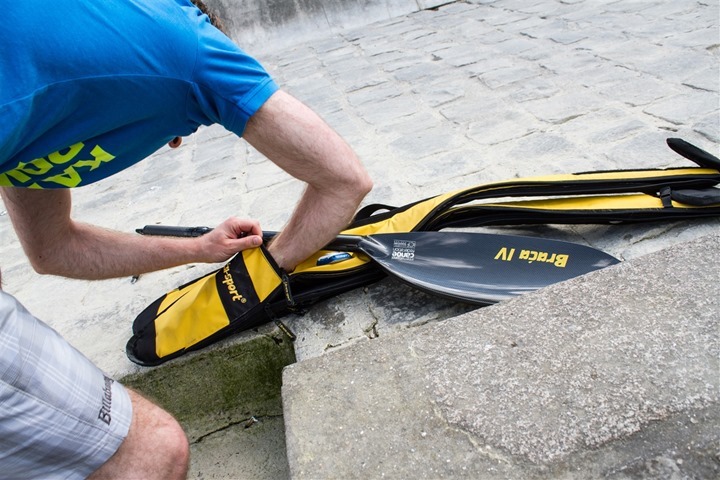 Just like a bicycle the power meter is really only one component of your entire ‘ride’ – the same is true here.  A consumer would purchase the the shaft – which is the long skinny part. As part of the ordering process they specify stiffness and length (and a specific shaft manufacturer for custom orders), sorta like on bike power meters you may specify crank length or type.  The consumer then provides their own blades (that’s the part that pushes water), and then glues them on like any other blade would be attached. 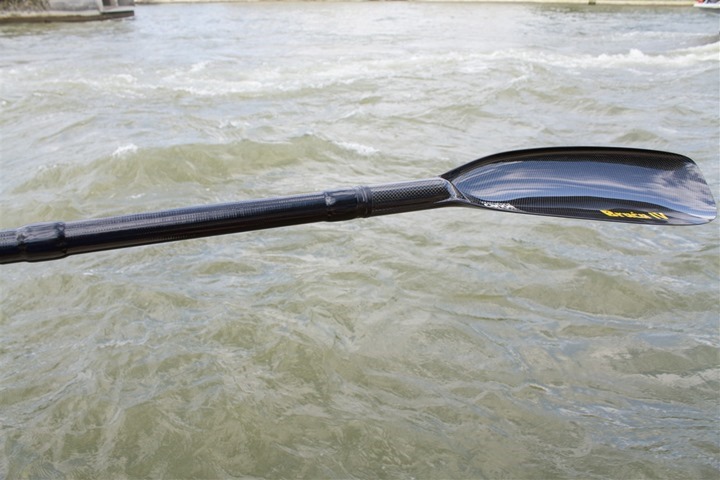 Within the shaft each side contains two bumps.  These bumps are where the sets of strain gauges are located. 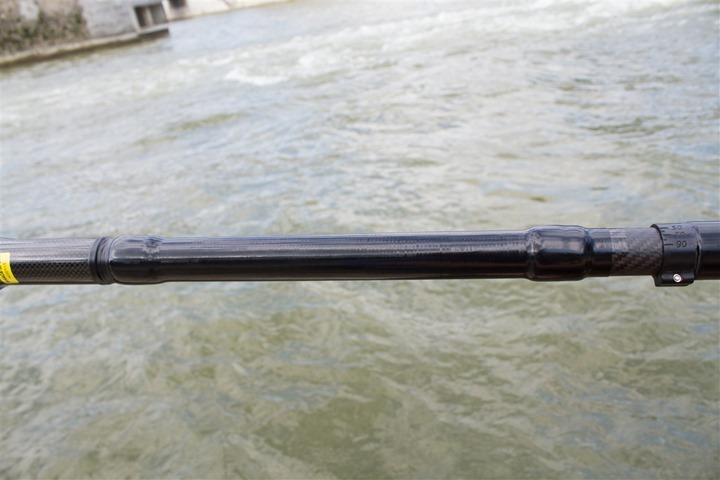 It’s these strain gauges that measure the power.  A single bump is known as a ‘channel’ for them, and each channel contains multiple strain gauges.  And each half of the paddle contains two sets of channels (so it can measure left and right independently). 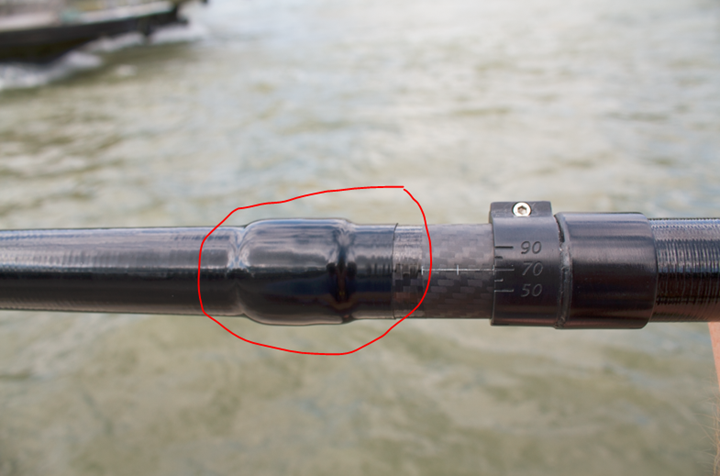 This is combined with what they are dubbing as ‘inertial sensors’, which is the patented part of the platform that consists of sensors such as accelerometers, gyroscopes, etc… (they wouldn’t provide specifics in this area).  Essentially, part of the ‘magic’ that allows them to determine aspects such as stroke rate.  That’s all inside the shaft just beyond the bumps: 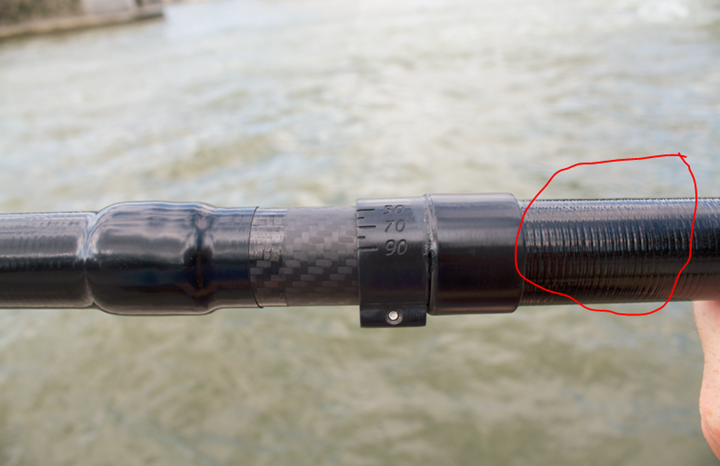 Finally, this all connects to a battery and ANT+ transmission system that gets a 10-12 hour battery life in normal transmission mode.  The battery simply plugs in via USB.  As you see below, the kayak paddle separates to access the battery port (and for travel/etc…). 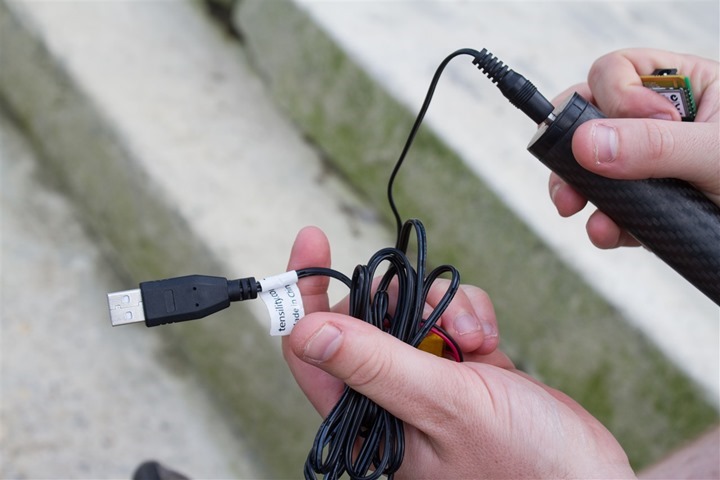 Here’s where the chip is, and what it looks like if it were taken out: 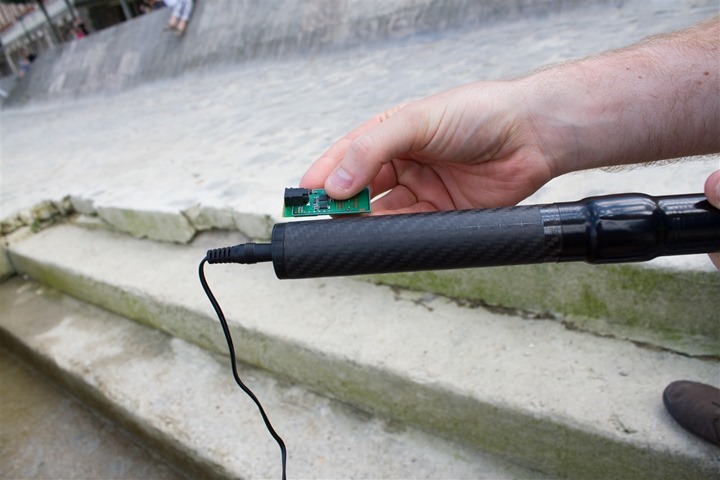 You’ll just use a small hex-wrench to tighten everything together (they use this versus a lever because it ensures you don’t change any of the length dimensions ‘easily’): 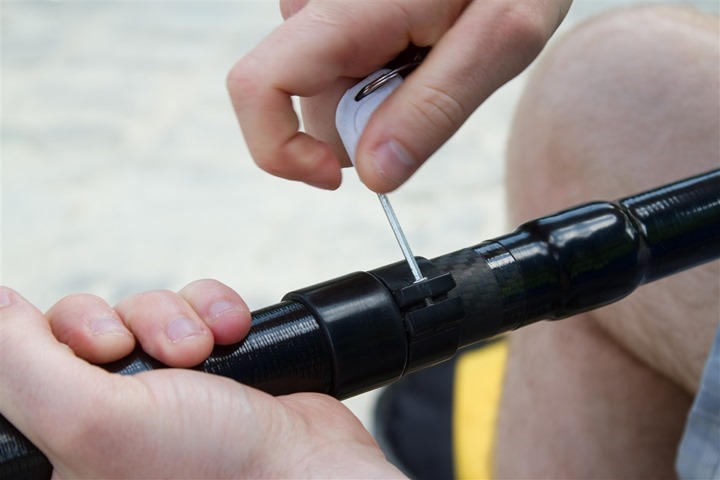 The system needs a few basic configuration points to be able to correctly measure power.  Unlike a traditional cycling power meter however, there is no further static calibration method.  Instead, this comes via inputting specific measurements of the blades.  This is done by selecting ‘known’ blades which have a pre-measured surface area for them.  Though, if a blade isn’t in their existing database of blades, then there’s a simple math formula to determine the values required. 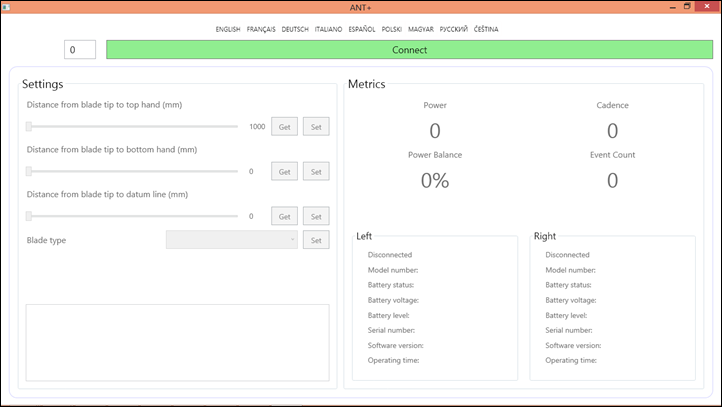 In addition to specifying the blade type, you’ll also specify measurements around the length of the blades to each hand position and the datum line.

Interestingly in the lead-up to the Olympic games they said the NZ team occasionally did tests with coaches in boats next to them where the coaches had the athletes change their hand-position and then using a laptop in the boat modified the distance settings, thus being able to test different hand position power output values. 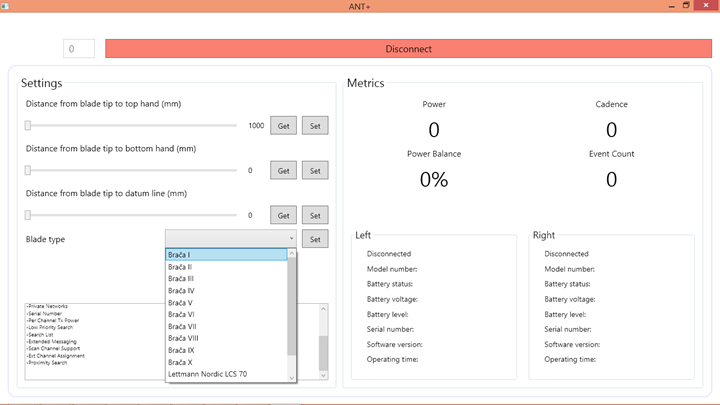 This one-time procedure is done on PC software (no Mac software yet, though if they see demand for it they said they’ll create it), and is transmitted with a standard ANT+ USB stick (just like downloading from your Garmin Forerunner watch).  Once the one-time procedure is completed, there’s no frequent need to access the software (meaning, no continual calibration).

They also noted that they are looking at potentially developing an Android app (they have a test one today) that would enable this as well for those with supported ANT+ enabled Android phones or USB dongles.  They’ve also looked at doing the same on the iPhone/iPod/iPad platform with the Wahoo Fitness ANT+ adapter.

Once the configuration is complete the system looks identical to that of a regular cycling power meter.  Thus most of the athletes today use Garmin devices today to view the power.  He noted the FR310XT and 910XT were most popular due to the waterproofing nature of them (being triathlete watches), though the Edge 500 was also popular because it could gather left/right data and was relatively easy to mount (the FR910XT can as well do left/right power). 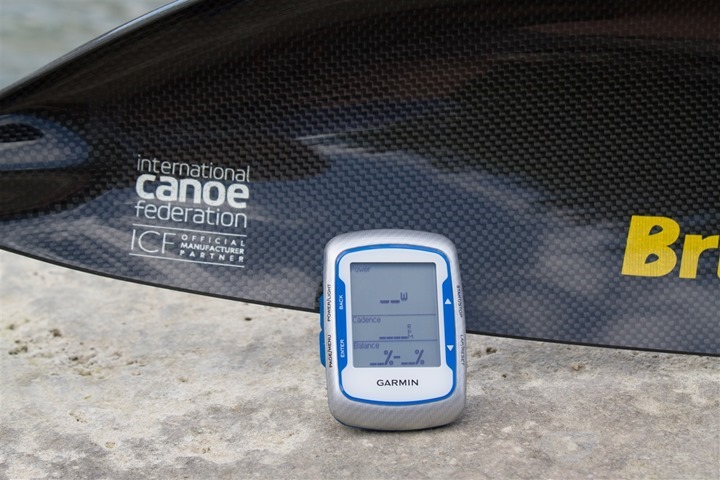 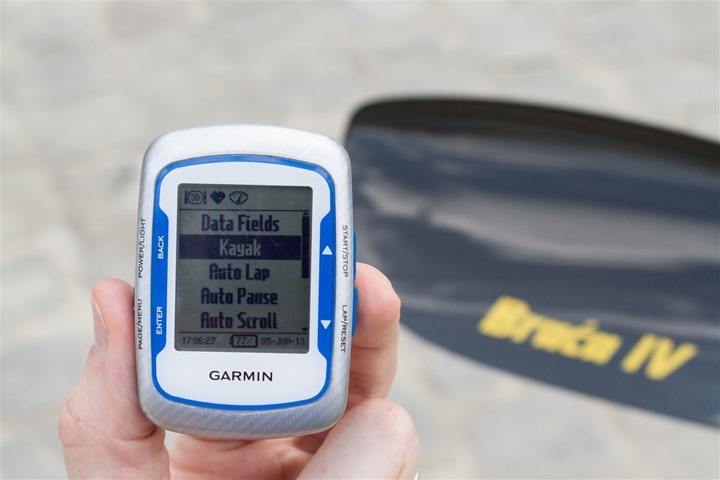 Alternatively, here’s the left/right data as captured by the Garmin device, again looking near identical to that of cycling:

You’ll see cadence data as well.  This is probably the only area you see a bit of a difference being the cadence is much lower than a typical cycling cadence, at 40-50RPM versus cycling which tends to be 80-100RPM.

And of course, all other aspects such as speed/distance/time/maps, etc… are all displayed as normal: 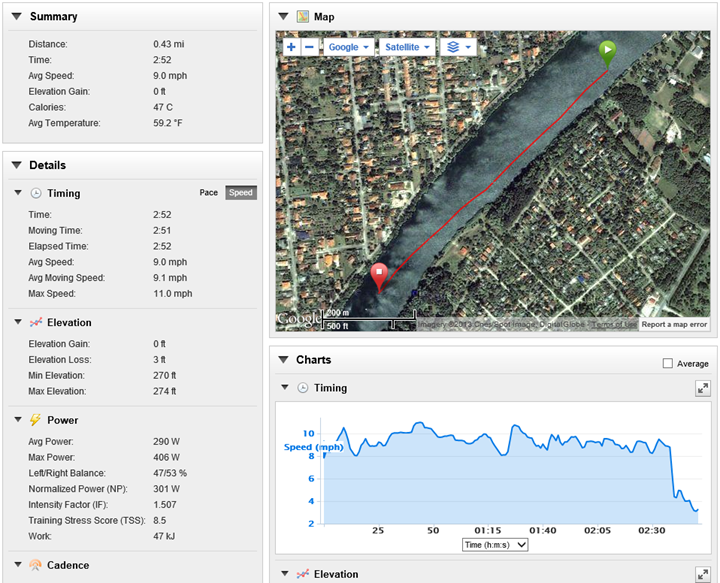 What I found most fascinating was the high-speed data mode.  In this mode they record the data at a much higher data rate but for a shorter time period (100 times per second), but they don’t record it to the Garmin unit.  Instead, they record it into an internal storage chip that has about 5 minutes worth of data recording time on it.  This is designed to capture 1000m events within the sport.

Now here’s the really interesting part – the user actually triggers this mode using the ‘Calibrate’ button within their Garmin device. 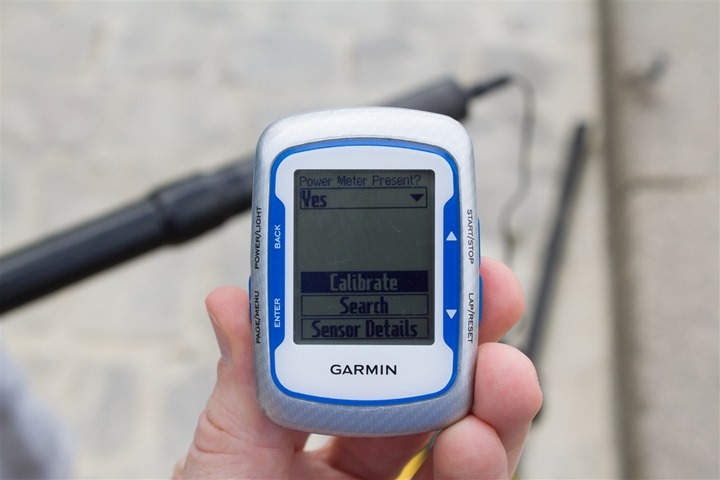 Once they press ‘Calibrate’, the mode will actually count-down how much storage time it has left (literally like a count-down clock): 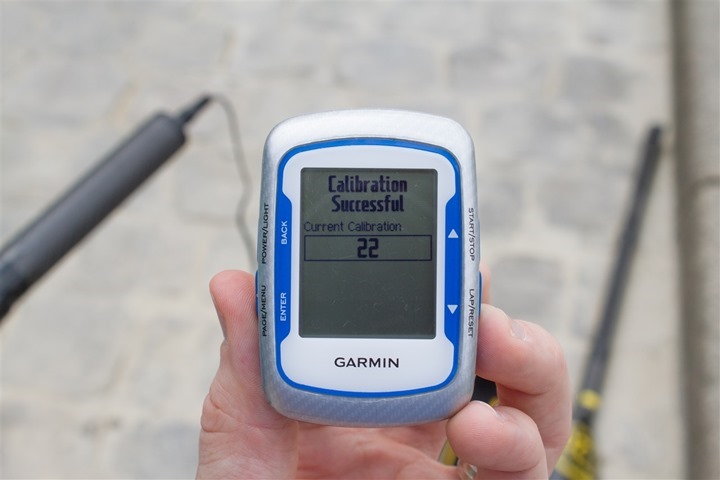 The actual button doesn’t calibrate anything, but is simply used as a backchannel to the Kayak Power Meter to trigger the high-speed data mode.  Though, the user at the same time can still record data at the normal speed to their Garmin device (by simply cancelling/backing out). 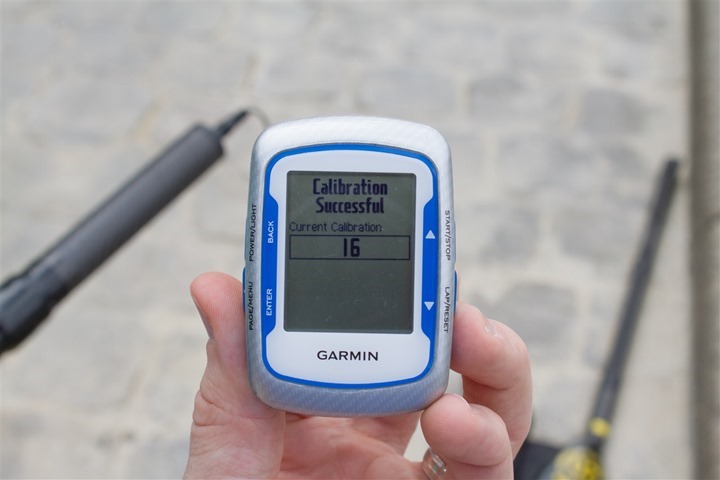 Once back at a computer, the user would use the ANT+ USB stick to download the data via ANT+, the file is then loaded into an HTML5 app that’s available to view on any computer platform (offline as well).  Below you can see the high speed data examples:

Finally, the software will soon be able to export out these results into a CSV file as well.

Today the platform is surprisingly priced cheaper than most cycling power meters.  The units are $1,039NZ ($820USD/620€), which includes the shaft but not the blades (most kayakers would have their preferred blades anyway).  As noted, it’s a New Zealand company and the full product is made and shipped from New Zealand (meaning some countries will have import duties, though the US does not).  Their current timeframe has them starting to process orders in July, but the waiting list puts new orders in the September timeframe.

It’ll be interesting to see what the pick-up rate looks like of kayaking power meter over the next year or two.  They’ve been in Europe the last few weeks at various kayaking events and it sounds like there’s a fair bit of interest – of course, turning that interest into orders is always the tricky part.

Related to this, I’m continuing to see more and more interest from companies in doing higher-data rate transmissions – primarily fueled by power meter companies.  However, that’s really going to be dependent on the power meter head unit companies (i.e Garmin, Timex, Magellan, CycleOps, O-Synce, etc…), not so much the power meters themselves.  In fact, most power meters themselves are already transmitting power in excess of what the head units can capture and record.  Perhaps devices like this in ‘new areas’ will continue to kick those companies into expanding data capture capabilities.