On attempting to do a Beijing Runaround 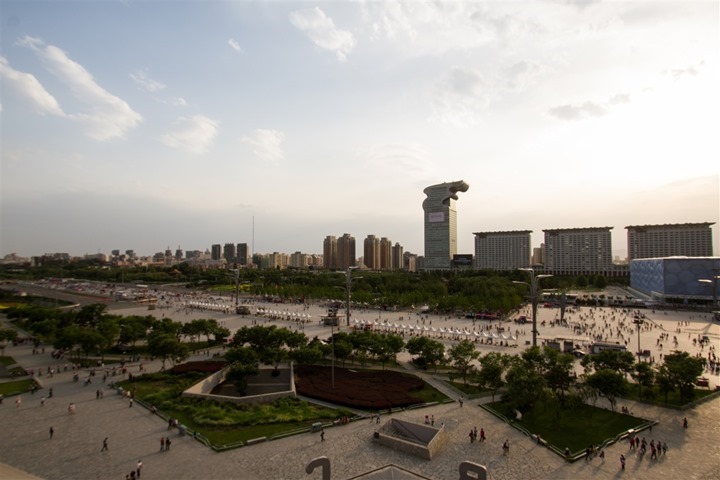 While I did get a chance to sorta swim in the Olympic Water Cube here in Beijing, I really also wanted to enjoy a few nice runs.  In fact, the day I went swimming the weather was beautiful, and weather-like things were also quite good.  As you can see above, it was a rather nice day!

Unfortunately, that lasted only about 8 more hours.  Why you ask?  Well, Beijing is well known as the city with the worst air pollution in the world.  Historically people may have just taken a swag at things and gone about their business.  But in today’s day and age, information on just how bad is everywhere.  In fact, it’s updated hourly here in Beijing.

See, every hour on the hour the current air quality index (AQI) is published.  There’s a few different numbers that are published, but the one most people follow is the AQI.  The lower the better, the higher the worse.  It’s color coded and relatively easy to follow: 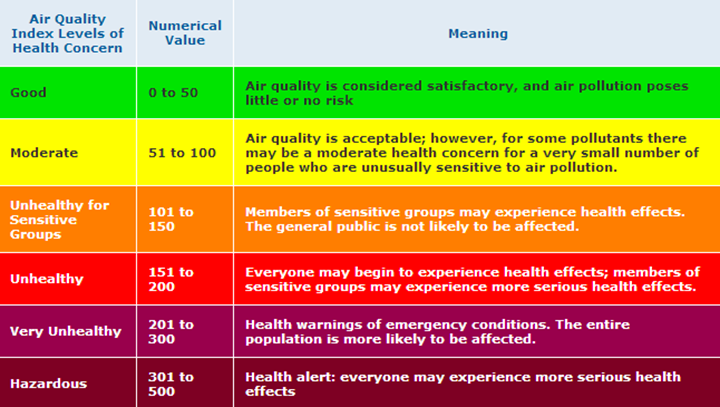 Above 500 it just converts to “Beyond Index”, which happened back in January (more on that in a second).

Which then corresponds with some structured guidance:

The data comes from two sources.  First is from the local government at two reporting sites in the city.  And the second is from the US Embassy.  In many cases, the local government variant tends to be more ‘optimistic’ than the US Embassy – for example, the local source won’t list values over 500.  That said, I generally saw them track fairly close while I’ve been here.  And they never approached ‘Crazy bad’ levels.

As I noted above data is published hourly on the hour (though, it actually hits feeds at 15 minutes past the hour), and then is digested into a slew of websites and apps that people can download and track.  For me, I just used the website and updated as required.  Here’s what the numbers looked like over the course of Saturday afternoon – only a bit of uptick around 6-8PM: 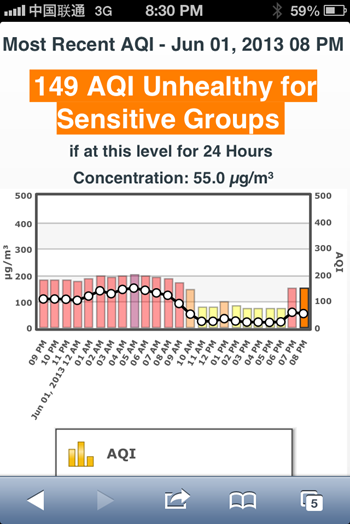 In fact, that’s not too bad mid-afternoon.  I looked later on at NYC and it was actually a bit higher at that point, and various parts of LA were also higher.  So, things aren’t always horrible.

On Sunday morning I was all ready to go out and run a nice 10-12 mile run.  Unfortunately, just before sunrise the numbers rose quickly and steadily, well past the ‘healthy’ or ‘moderate’ zones.  I figured that it’d get better as the day goes on since being a Sunday there would be less traffic, as it seemed to do that on the previous days.  Unfortunately, it only got worse.  And further worse.  And then flat-out bad.  This was the one time were the Chinese information had actually pegged it a bit higher at 315ish if I remember. 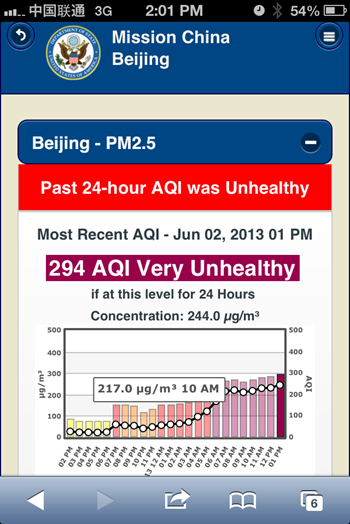 It ended up being the highest recording I’ve seen while here.  This is what it looked like out my hotel window.  Remember, not fog, but smog.  A sorta smokey tasting smog. 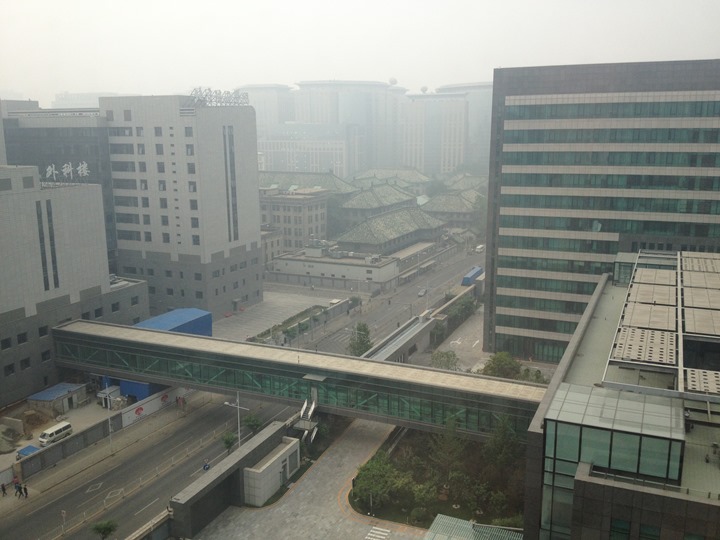 I was bummed, I had an awesome route planned out.  I was going to start on the Olympic Green and swing past the Birds Nest stadium, a slew of other venue, and then up into the parks north of there.  Would have been an awesome route.

Not all was lost though,  I did spend some time on Saturday within the Olympic Stadium.  These days, you can pay about $7 to go in and wander around, and it’s actually kept up fairly well. 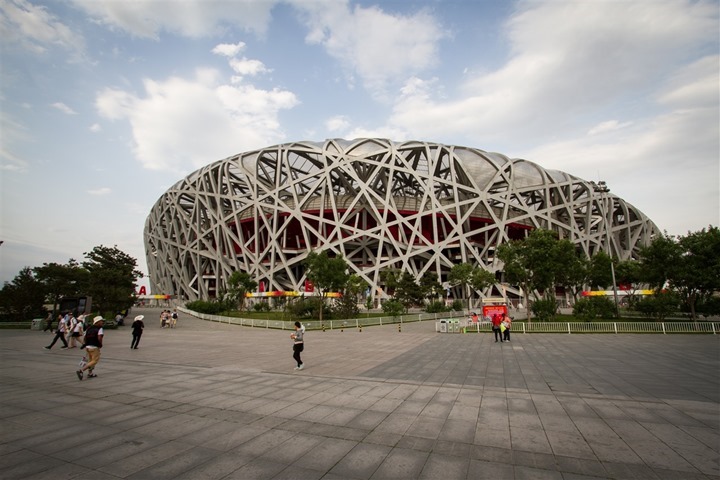 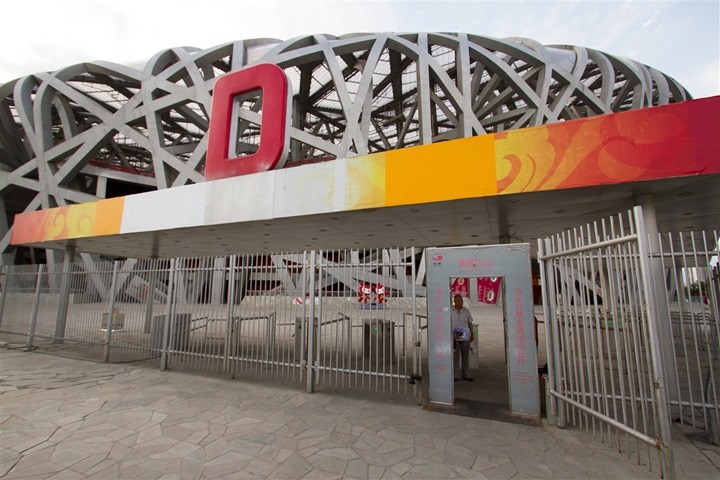 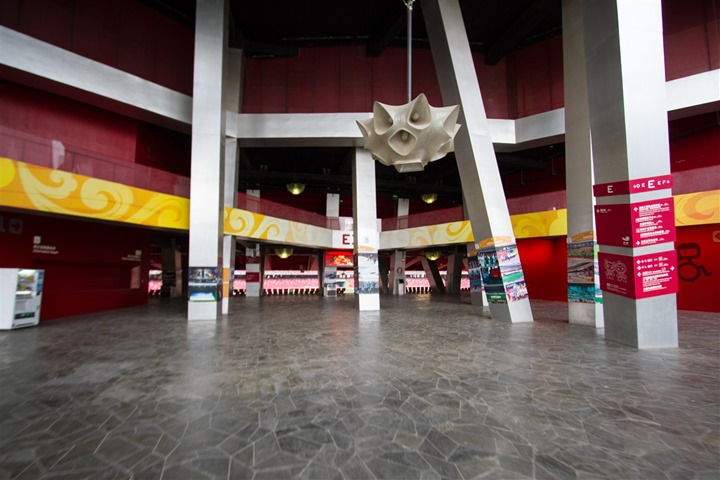 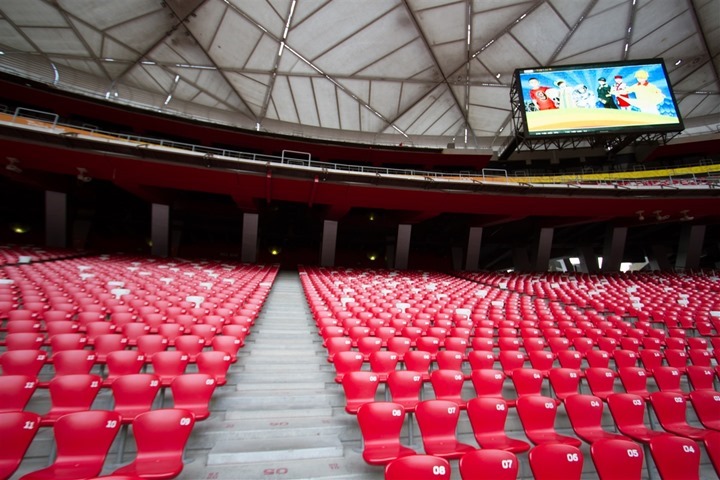 You can even rent a Segway and ride laps around it: 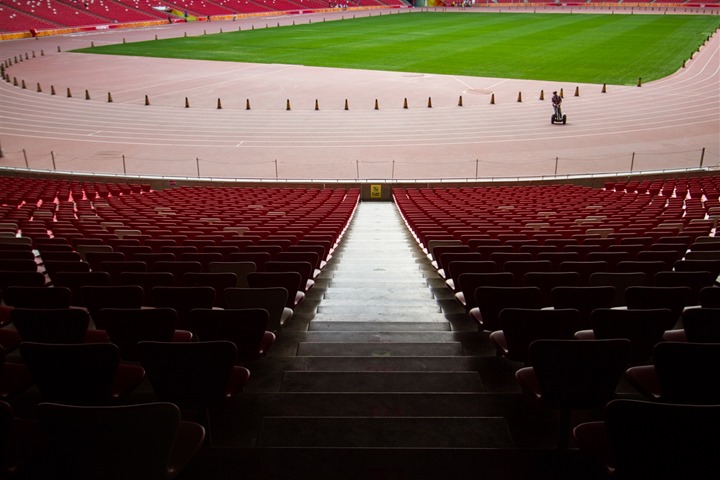 Or, just do as I did and wander all the way up by my lonesome to the very top decks and last row: 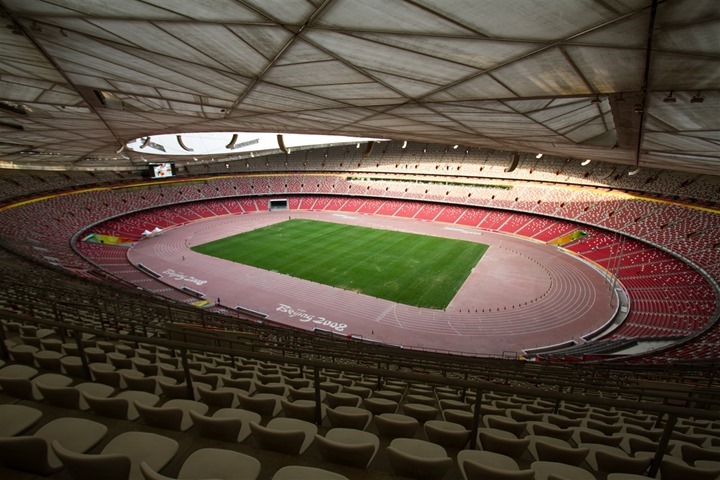 On my planned route I would have also swung past the wall of medalists.  This wall seems quite similar to the Vietnam Wall in Washington DC, but instead lists all the Gold/Silver/Bronze medalists for each event.  Both Olympics and Paralympics: 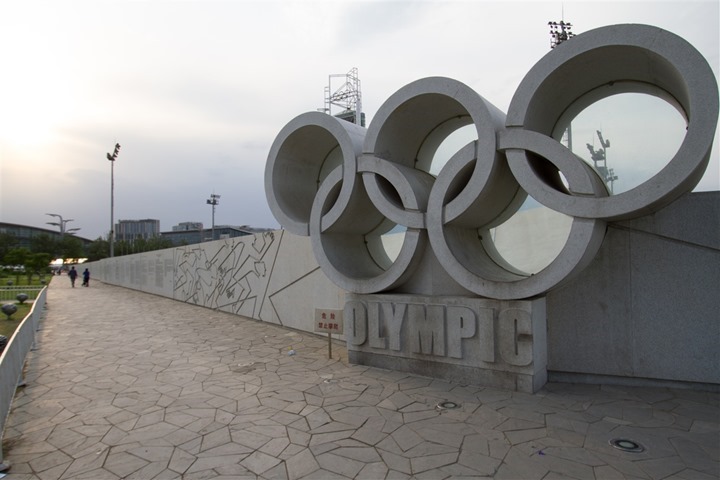 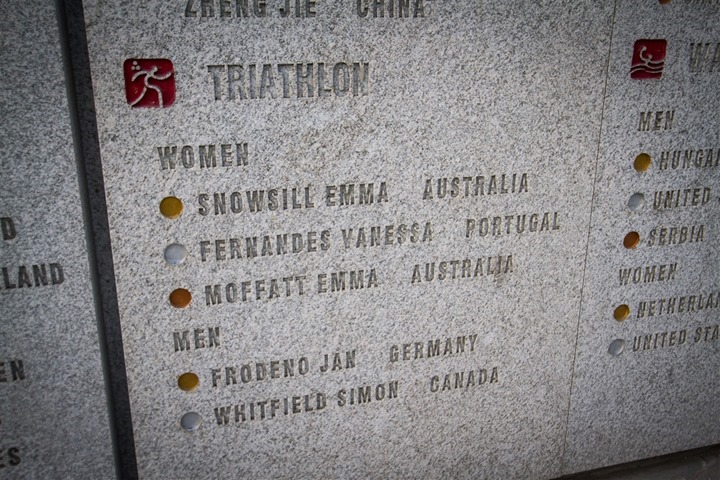 Unfortunately, with the air simply unsafe, I stayed inside for my ‘vigorous activity’.  I used a rough AQI cutoff of ‘150’ as my limit for running outside.  That roughly matched with what various governing bodies recommended for athletic exposure during intense exercise.  Of course, it’s always hard to understand what someone’s definition of ‘intense’ is – but better safe than sorry I suppose.

So treadmill it was and hotel gym it was. 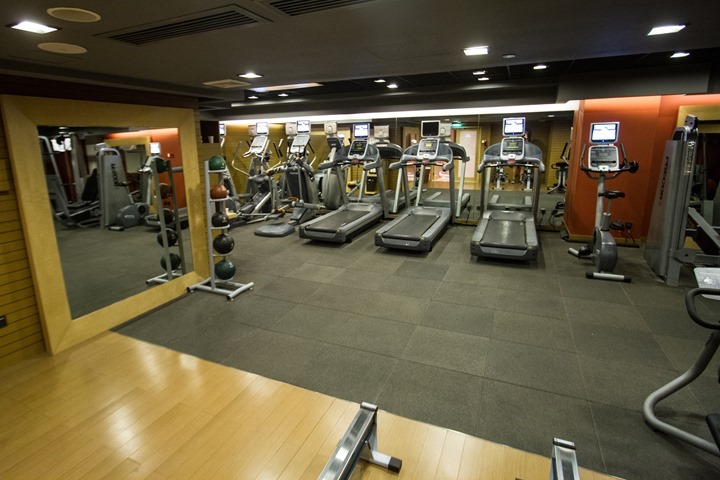 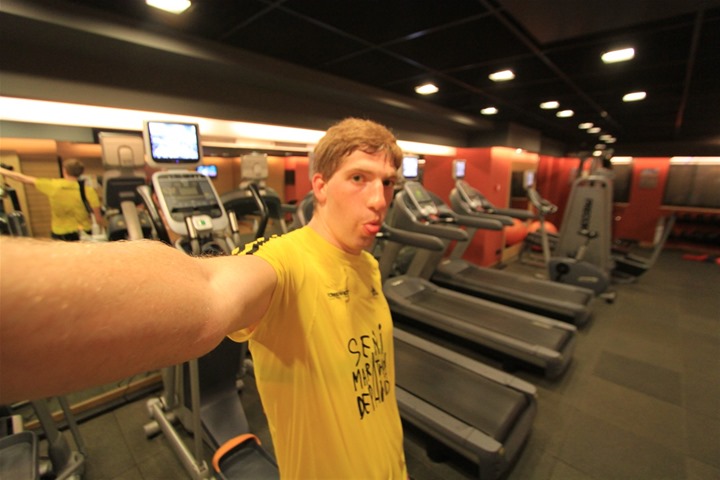 On Tuesday I was really hoping things would clear up for a long interval run.  I could still pretty much use the same route and just do it interval style.  But again, no love in the land of smog.

So, again back to the treadmill. 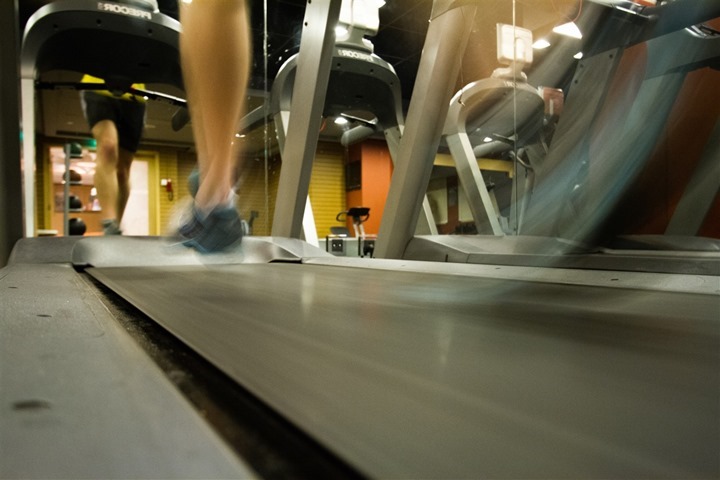 I did learn quite a bit though about various Chinese endeavors, since the only English channel on the treadmill was the national Chinese news station.  I can tell you all about the current Presidential trip to Central America and Costa Rican diplomatic relations.  Or about the impact of talks between Japan and India. 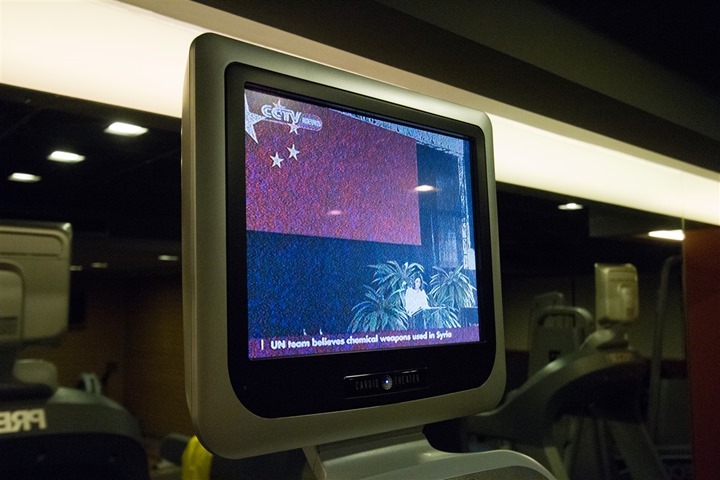 I loved that the hotel had these headphones instead of the ones that go into your ear.  I’ve never had good luck with those and treadmills.  These just worked. 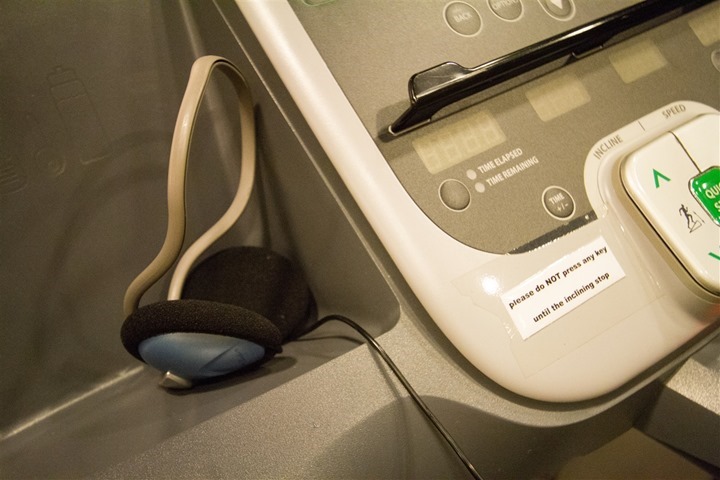 My Tuesday night workout ended just before 1AM.  Just the way it worked out schedule-wise with conference calls that night. 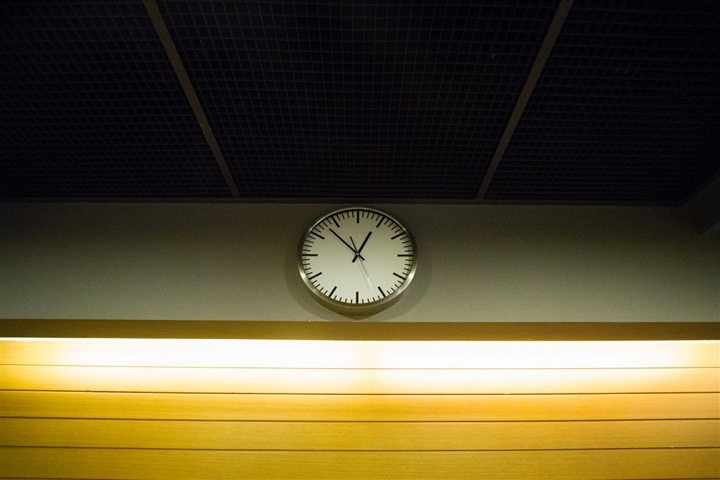 During my stay I also learned that if you’re tall, you should bend down and see what exactly the difference is between the two water spouts before you put your hand under to simply feel which one was cold water. 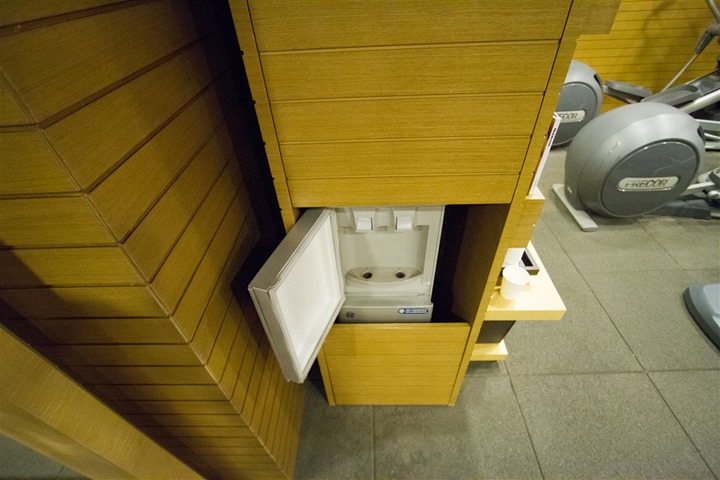 It turns out if you go down to child-height, you then see a little red ‘Don’t touch’ symbol.  I discovered that the hard way.  Turns out the don’t touch water spout is really damn hot.  Like McDonald’s coffee-pot hot.  I was a sad panda for a while. 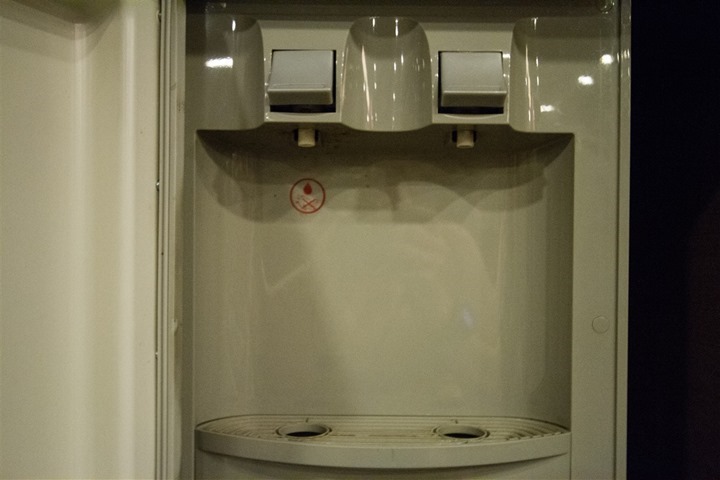 With my run completed I grabbed some product shots for upcoming reviews.  It’s sorta nice having an empty gym at 1AM.  Nobody staring at you while you take 28 almost-identical shots trying to get just the perfect one that illustrates a given point. 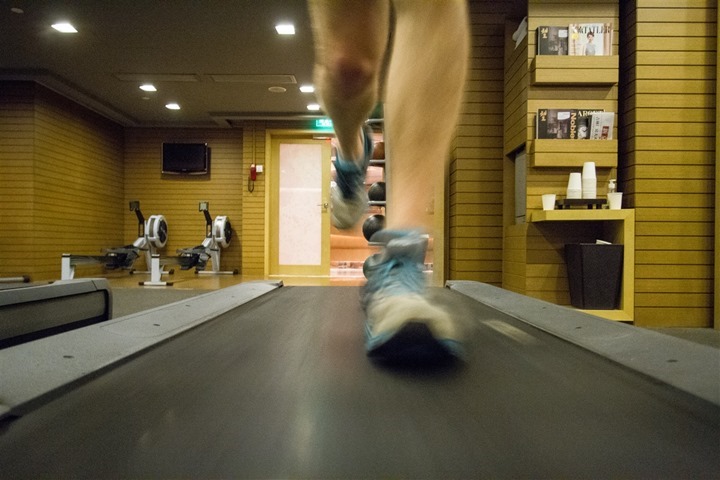 After that, I headed back to my room and spent hours catching up on things.  Beijing is 12 hours ahead of the US East Coast, which means you never really get a break from it.  I ended up just staying up all night, as my flight is at 6:45AM this morning (about 48 minutes from now as I type this), so I figure I’ll sleep on the nearly 11 hours back home via Zurich.

Sorry there wasn’t a Beijing Runaround this time – but fear not, I’m sure I’ll be back and “weather” permitting, I’ll be at it trying again!