Over the past few weeks Garmin’s been rolling out a few updates to the existing Garmin GTU10, which is their gum-pack sized tracking unit.  This is the unit that’s great for endurance athletes doing long distance races – such as an ultra running race or a half-Ironman or Ironman.  You may remember me using it back at the Boise 70.3 this past summer, to automatically update my location.  The unit uses an onboard GPS receiver to send coordinates as frequent as every 15 seconds via cellular networks (it used to be every 30 seconds).  Your cell phone need not be on you, it has a GSM chip built in.  You can customize the update timeframe to have the battery last as long as four weeks.

But the changes don’t just come in the form of a firmware update.  Nope, significantly more important changes were made to the app, as well as the site.  And that fancy ‘Deluxe’ $4.99 tracking plan finally has some useful additional functionality in it.

Interestingly, I got this little warning message.  At first, I was kinda peeved about it – as it seemed to me that Garmin was trying to tell me how to use my own device.  Or in essence – telling me I couldn’t even give it to my wife so I could track her.

So I went back to Garmin and asked for clarification on what exactly this message was trying to tell me.  It turns out, the concern here is that if you were to give the device to someone else, but not tell them you were tracking them – that Garmin could be held legally liable for privacy issues.  Further discussion clarified that nobody from the Team Garmin Police force as going to be coming knocking out at your day, but rather this is just a liability thing for CYA for them. 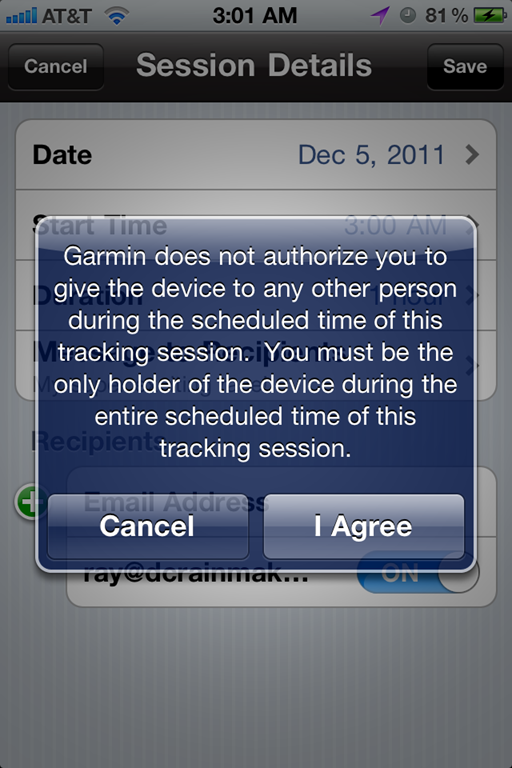 Once that’s all set, it’ll go ahead and shoot out e-mail notifications.  Unfortunately, the notification will likely end up in your junk e-mail folder, especially if on GMail, so you may need to go fishing there.  Once you find it, you’ll click on the Follow Me link.  Remember, this is ideally going to friends and family. 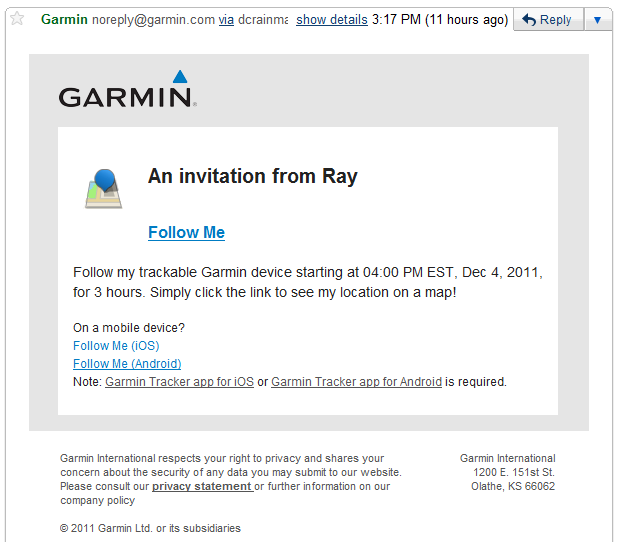 For the duration of the time you specified (starting from the start time you list), the user will be able to track you on a map. After that point in time, it just defaults to the Garmin page.  There only other challenge here is that the user must already have and/or create a Garmin.com account.

I think this is a good first step for a more open/functional tracking architecture, but honestly, it still doesn’t meet my needs – or the needs of what I hear from many others.  At the end of the day I want a site I can send out and people can just click on a link and immediately see my position.  I don’t want them to have to sign-up for a site.  I do like the expiry concept, but 5 hours is just too short.  Since the device can last week, I should be able to configure a timeframe that extends months if I want to.  After all – if I was using the solar or car charger with the device, no reason that battery is my limiter.  Today, the Spot device has this exact same functionality.  Additionally, I can set a password if I want, as well as create multiple shared pages.

And of course, I’m also still looking for them to add that $1 or so ANT+ chip into the device and send that data too.  But perhaps I’m asking for too much for a Friday morning.

Speaking of which, that’s all I’ve got.  Thanks for reading and have a great weekend!