A look at rear-facing cameras for bike safety (and a pair of camera sunglasses)–Cerevellum, Owl 360 & Pivothead

Many have previously heard about a company called Cerevellum that’s been putting together a rear-facing camera system that ties into a bike computer.  The goal of their system was to design a ‘black box’ type platform that records the video stream displaying what’s going on behind the rider.  This video could be used in the event of an accident (or close call).  But their system isn’t the only one out there, so this post will be a combo dish of a few systems that I had the chance to look at today at Interbike that all offer video solutions for folks on the go.

Note that I’ll be doing a separate post with ones designed to record your activities (to show off to friends) like the GoProHD, based on my hands-on playing with three devices at the Outdoor Demo on Tuesday.

Let’s go ahead and start with Cerevellum and their Hindsight, since I mentioned them already.  Cerevellum’s premise is combining an advanced bike computer with that of a video camera (rear mounted).  Their system has two major components with a cable connecting the two.  The first is the bike computer and LCD screen: 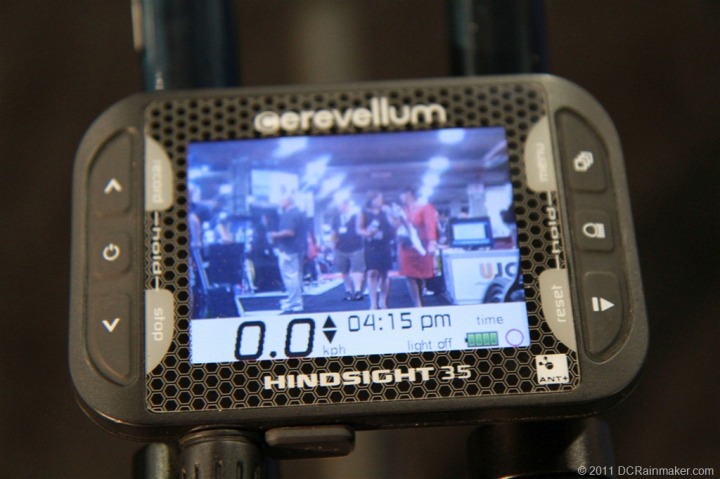 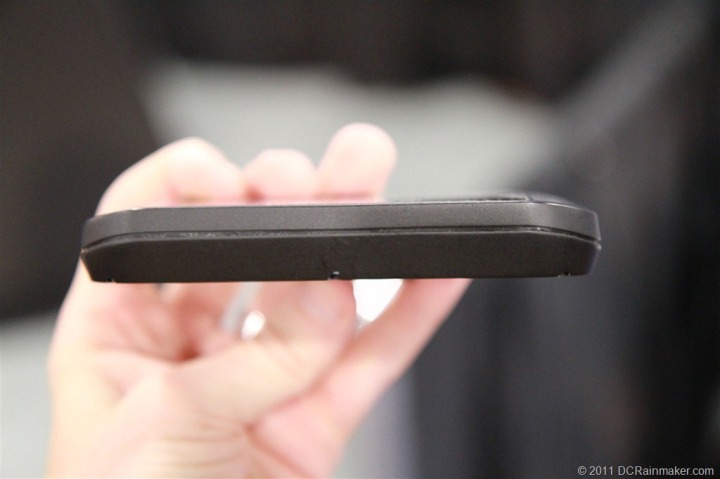 And the second is the rear mounted camera (along with three LED lights): 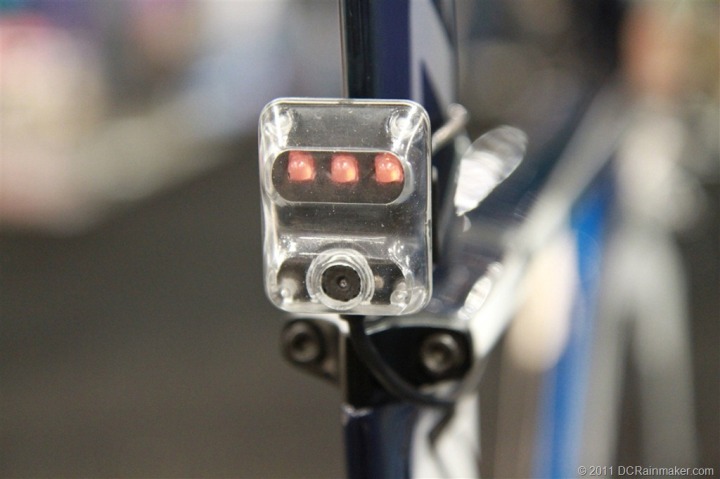 And while they recommend to mount this camera rear facing – there’s nothing keeping you from mounting it anywhere else you’d like.  And as noted above, there’s a small wire that routes between the two components: 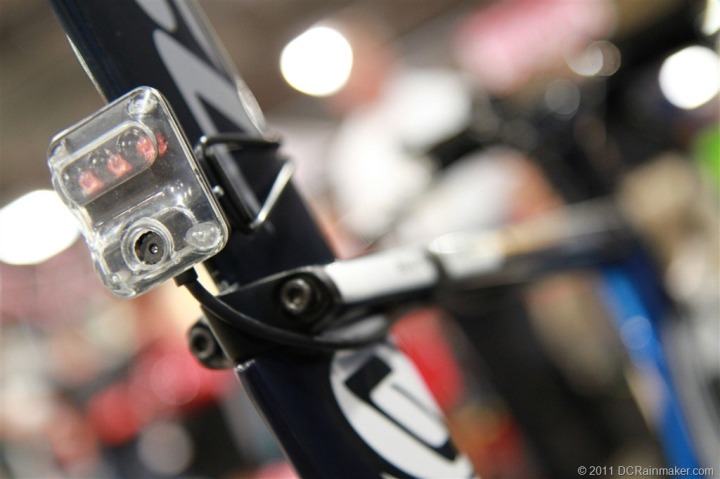 Also of note is that they’ve developed both a road bike mount and a time trial/triathlon bike mount. 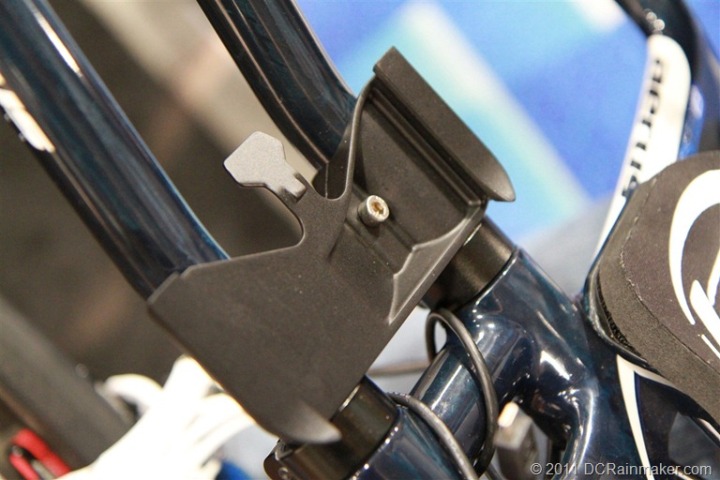 The head unit and bike computer is ANT+ enabled and allows you to not only display the video stream, but also ANT+ data like speed/power/cadence/heart rate from ANT+ accessories – just like a normal bike computer.  These files are then downloadable afterwards.

The video stream records by default on a 10-minute loop. In the event of an accident there are built-in accelerometers to detect an abnormal event and stop the video (which is continually written to memory). 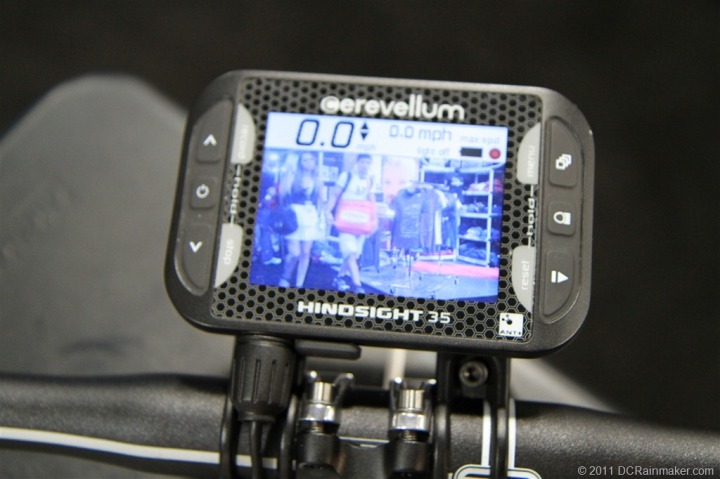 Additionally, you can also use the system to capture drafters in a non-drafting race – but note that once you stop the video it’ll only have saved the last 10 minutes worth and if you press start again you won’t be able to save the previous file.  This doesn’t affect the bike computer recording portion however.

One cool feature is that Cerevellum is going to allow 3rd party developers to access the API and write apps for the device.  I saw a note yesterday from an ANT+ developer looking for “someone to develop a bike computer that we can write our own operating system for” – and while that might be entirely be the case here…it might just be pretty close.  These apps (written in a Linux environment) would then be downloadable to the units from a Cerevellum marketplace like system. 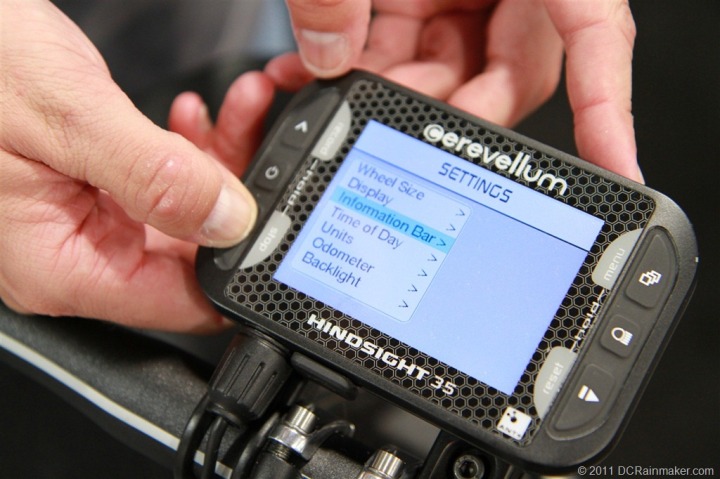 Their goal is to have the units available by this Holiday Season, and should retail for $299.

Next we have the Owl 360.  Their goal is much simpler than Cerevellum system – by their own admission.  Their target audience isn’t endurance athletes looking to have a full bike computer on their handlebars. Instead they’re focusing on the more casual user, primarily bike commuters and folks who may have kids in tow while on the bike.

Their system doesn’t record data, but rather provides situational awareness behind you.  It allows one to see what’s going on in a ‘rear view mirror’ sense, in hopes of being able to prevent a bad occurrence from happening.  Sorta like the systems in some cars now that have a rear camera behind them.

The system includes two components.  The first is the rear mounted camera, which also includes a series of high powered LED flashing lights (like a standard rear bike light system): 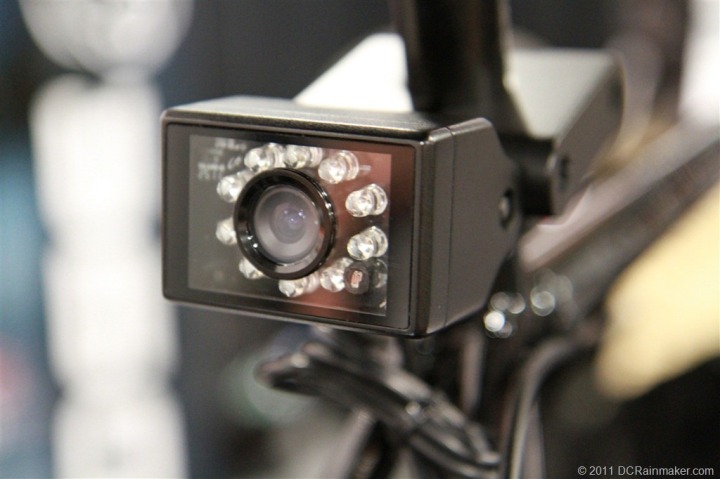 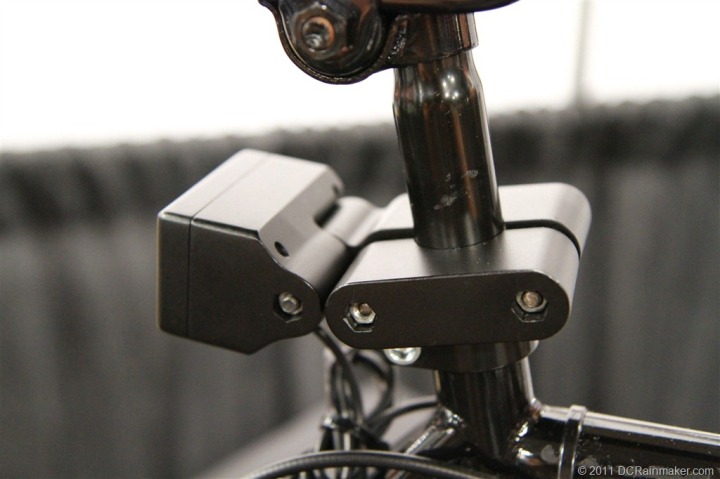 This is connected via cable to the front of the the bike, where the display sits.  The display is a 3.5” LCD panel with a battery life of about 5 hours.  The display in turn shows the video in real time. 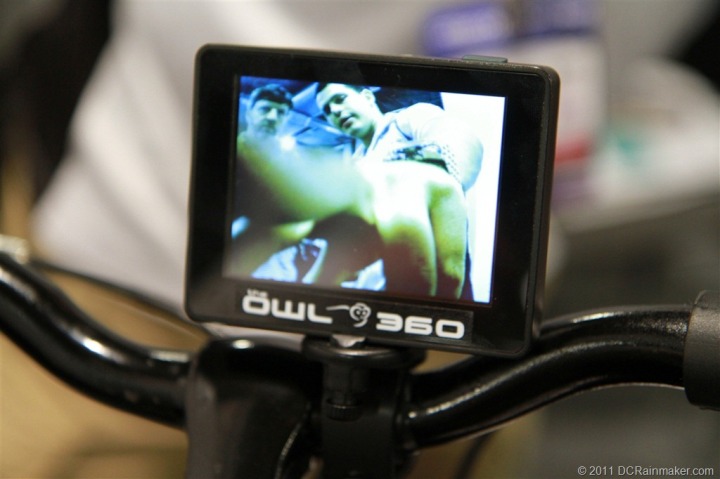 It should be noted that the system is water resistant with an IPX6 rating – meaning that you can spray a bunch of water at it and it’ll still keep ticking…but no snorkeling allowed.

As noted earlier, with their simpler goal they’re able to offer a lower price and thus reach a different market.  They’ll also be available by the holiday shopping season at a price of $179.

Last but not least we’ve got Pivothead, who makes the most James Bond looking sunglasses you’ll ever see.  These camera mounted glasses have a small HD video camera mounted in the front – and are specifically designed for sports use. 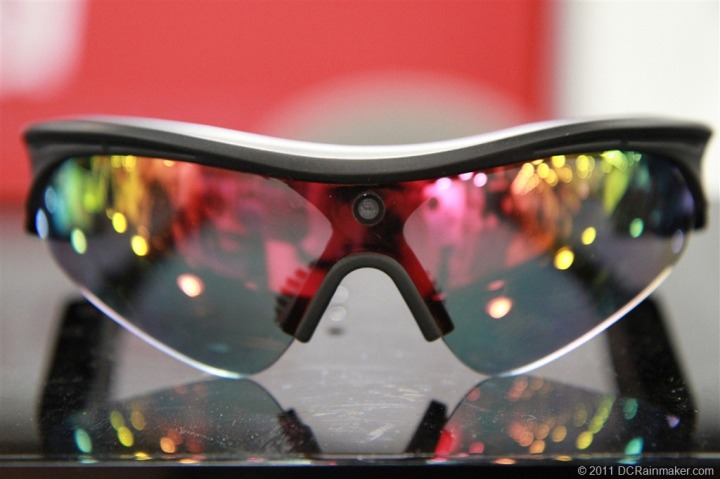 How are they specifically designed for sports use you ask?  Well, they’ve got a hardware based image stabilizer in it – which is in comparison to the many compact sports camera systems that instead have a software based stabilizer (which generally suck). 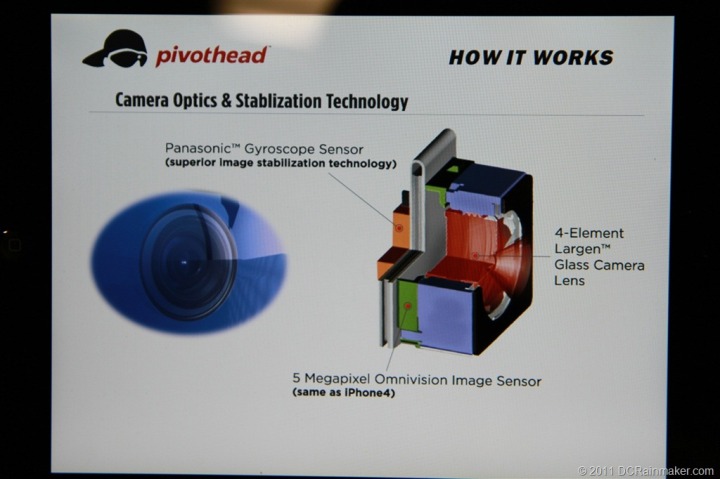 The units support up to a 32GB MicroSD card in them, and record 720p HD video.  You can also take still photos by simply tapping the button on the bottom of the glasses. 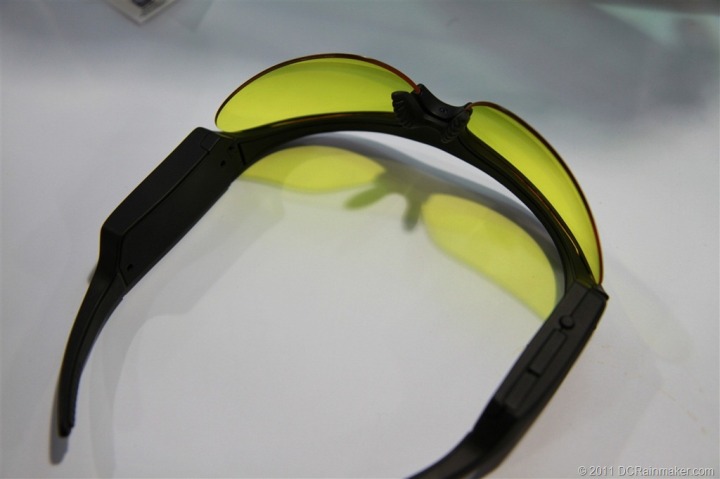 In order to configure advanced settings on the fly away from a computer they’ll also be offering an Android app that can use a MicroUSB connector cable to change settings on any Android phone.  While they would love to eventually go the direction of Bluetooth – today it just adds to much space in the already space constrained unit.  As an aside, on their site they have a pretty solid listing of all the technical features and settings you can change (more so than most companies do). 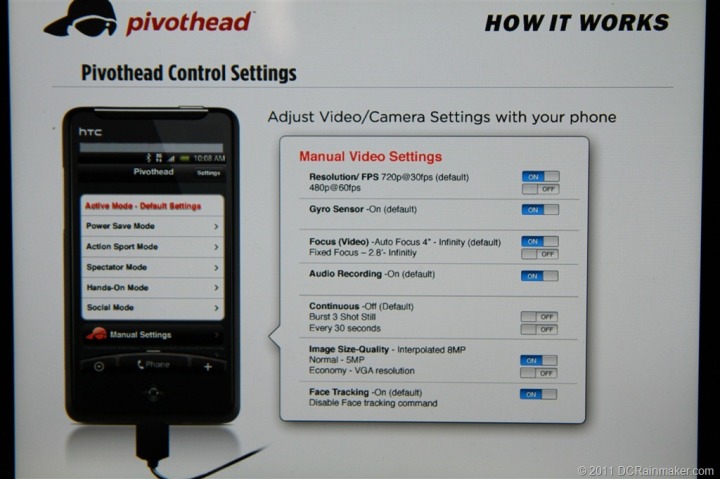 While the company allows you to customize virtually every part of the glasses to make something fairly fashionable, they are actually intended for sport use.  The units are water resistant to IPX3 levels – which means spraying of water against them is fine.  They’ll also be releasing a version targeted for watersports folks early next year that’s more fully waterproofed for immersion. 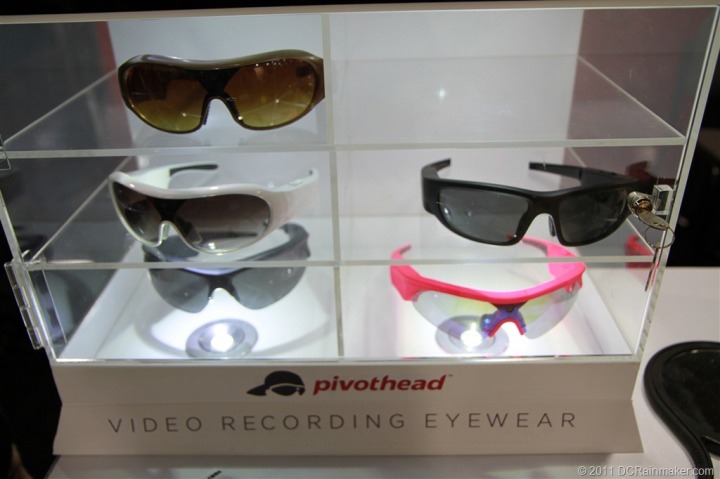 The Pivothead glasses will be available by the holiday buying season and available for $320…so go get your sporty James Bond on!