The Escape from Ft. Delaware is a bit different than most races from a logistics standpoint – but that made it absolutely perfect as a lead-up to my ‘A’ race – Boise 70.3 – here in about 3 weeks.  See, just like Boise this race also starts at roughly noon.  And also just like Boise, this one is a bit of a point to point affair requiring some pre-race planning with respect to starting in one place, and finishing somewhere else.

However, unlike Boise we were able to simply drive the two hours north from Washington DC up on Saturday evening.  Come mid-morning Sunday we simply pulled up to the race site and got all unpacked. 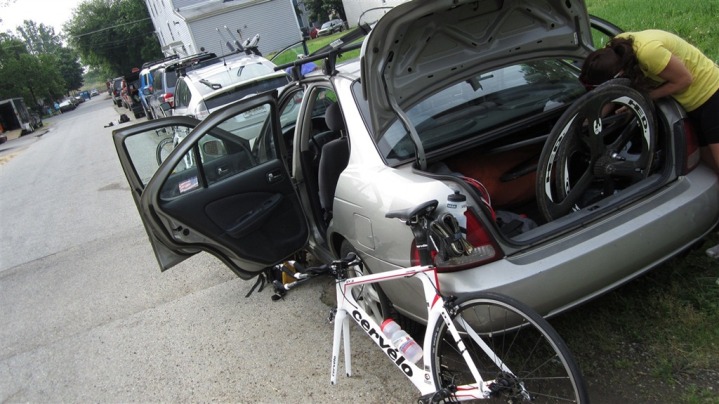 You may have noticed that my race wheels aren’t yet on the bike.  I just happened to pack it on the car before putting the race wheels on.  But normally if I’m driving to an event I always take both pairs of wheels.  You just never know what might happen that you might need the other pair (spoke breaks, run over it, too windy for race wheels, etc…).  Same goes for helmets, I always take both race aero helmet and regular helmets, just in case I (or someone else) need it.

With everything set I headed on over to transition around 9AM to pickup my packet and race chip.  I love races that do same day packet pickup.  So much easier. 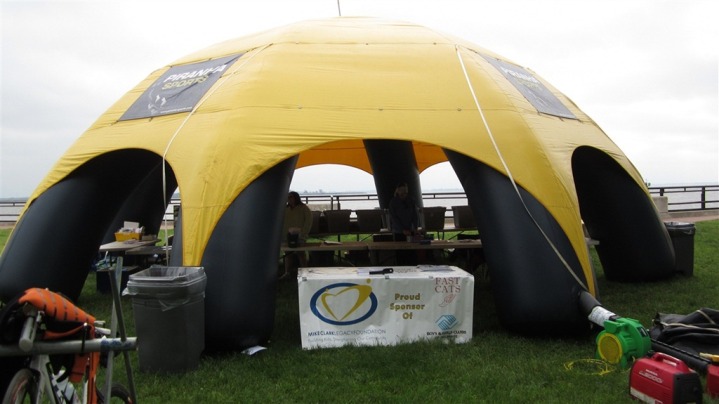 It only took a few minutes from there to get all setup in transition.  Like usual, I have a fairly minimal setup (my bike below is the white Cervelo in the middle of the frame).  Though this time it was just slightly too minimal in that I left my transition towel in the car.  Didn’t really end up mattering at all though since there wasn’t any sand or mud that you’d want to wipe off your feet coming out of the swim. 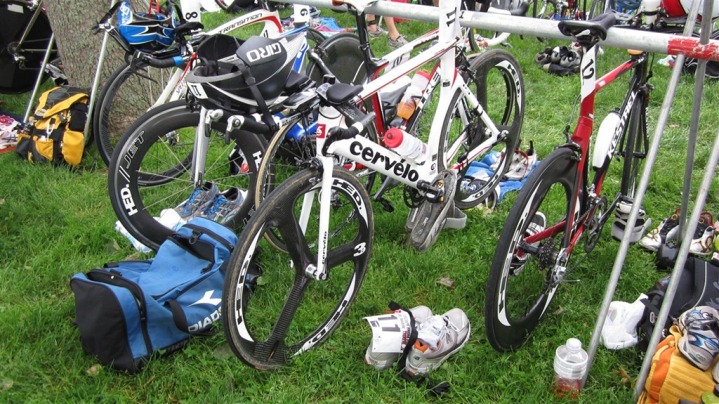 Speaking of the swim – it was soon time to board the ferry.  Since this was a point to point swim, the race actually started over on a nature reserve about a mile away.  You boarded a ferry in waves starting at 10AM, I was in the first ferry boarding wave. 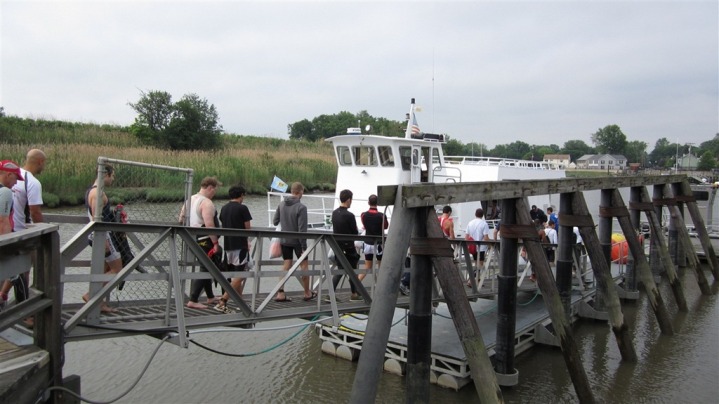 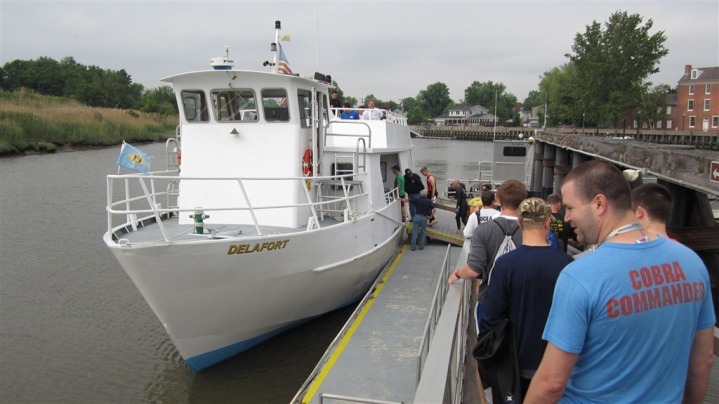 Perhaps the funniest part of the entire day was when the ship’s Captain came out in front of the 50 of us onboard in our wetsuits and said:

“I’m pretty sure that ya’ll can swim far better than I, but you’ll have to forgive me as I do need to tell you where the lifejackets are and how to use them…” 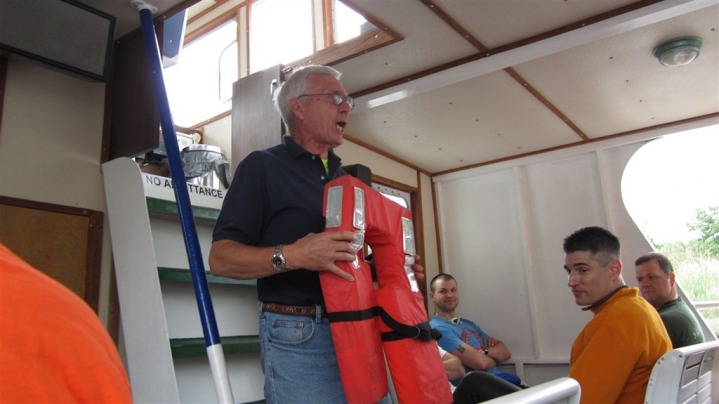 Once we arrived at the island we found it nice and quiet: 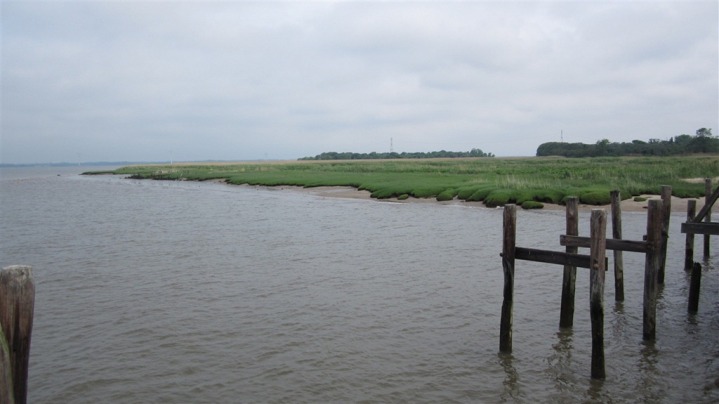 At this point I still had about 1hr and 45 minutes to kill.  There isn’t much to do there except simply sit and relax.  Which is honestly just about the perfect thing to do.  I found a little place below nearby the clean port potties in some shade (that’s not me below, that’s the dude next to me in the sun). 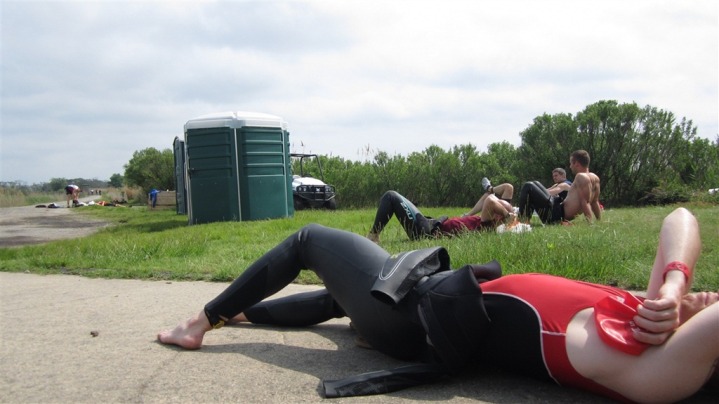 As we neared 11:45AM I got all packed up and ready to go.  Before I knew it…we were jumping into the water.

The swim crosses over the Delaware Bay to Delaware City.  It’s simply point to point from one dock at the nature preserve, to another dock at the city.

When we headed out there on the ferry everyone noticed a fair amount of floating debris (logs/sticks/etc…), but I was lucky in that during my swim I managed to not run into any.

With a bit of a current I started upstream some and then drifted slightly downstream to meet the buoys closer to the finishing area.  This worked great.  My swim itself was fairly quiet, as there were only a handful of guys in front of me.  I kept the pace fairly consistent, but probably went a bit too easy.  I was however very happy with my line – I felt it was rather solid and that I didn’t waste much  time wandering around.  The light chop of the open bay didn’t bother me either, but I could see how if one wasn’t as comfortable in the water it would definitely have been a bit of a problem for some.  For me, after Rhode Island’s swim a few years ago – pretty much anything not involving hurricane induced waves is peachy.

Towards the end of the swim there’s a short canal you head upstream for the last 150y or so.  This stretch had a surprising little bit of downstream current in it, which was quite noticeable if you sighted off of some of the docks you were swimming past and realized just how slowly you were really moving forward.

All in my swim time was a bit off the mark at 27:13, but compared to the rest of the field, not too bad in 13th place overall.  The fastest swim was ‘only’ 6 minutes faster.  That’s about in line with where I usually stand though off the leaders in the swim.

I was quickly on the bike in less than a minute – 49 seconds to be exact.  Though, some of that had to do with the fact that the transition times were measured literally from the point you entered the transition area itself, as opposed to being from the swim exit (which is why my swim time is a bit longer as well with probably a minute of running).

It didn’t take long on the bike to get into a bit of a rhythm, which I was happy about.  With less than 10 guys ahead of me, it was a very prolonged effort to pull in each and every one of them.  And while I was making progress on that front, I was really rather happy with my power numbers.  My race plan for the first 15 miles had me holding between 250w and 270w – and I was able to easily do that at a nice even cadence between about 90 and 95RPM.

Then, as I hit the 15 mile marker, my race plan allowed me to bump that up a little bit to 270-285w steady-state, which I was again able to nail.  You lose a bit of power from an averaging standpoint on both sections due to a long descent coming off a rather high bridge (about 60-90 seconds descending from the below beast).  I know it doesn’t look terribly high up…but really, it is – 135ft to the water should you accidentally fall over it.  I took the opportunity to ride a bit away from the edge, that way in the event I did crash I wouldn’t have gone over the edge.  From where I was sitting on my bike, the railing was barely the height of my handlebars. 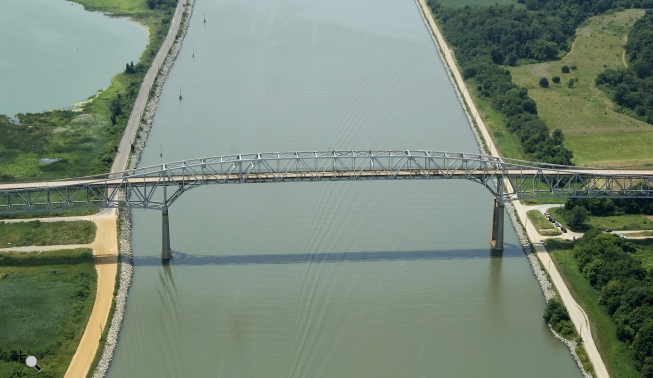 Outside of absolutely nailing my power numbers, there wasn’t actually a ton of action.  It was just a very steady effort.  Probably one of my best and cleanest race plan execution, I was very happy with it.  The roads were also dead quiet, so much so that you probably would have thought it was a closed course.  I maybe only had 2-3 cars pass me the entire race.  And as for other competitors, I only saw the 2-3 guys that I passed.  Nobody else was really ever within sight. 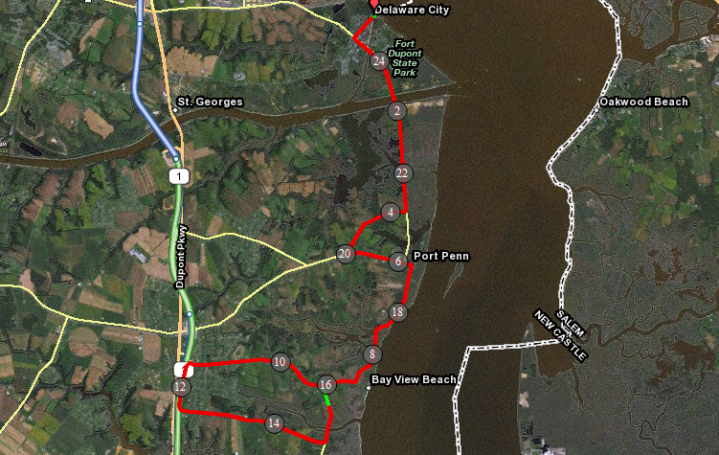 The wind was definitely a factor though – slowing down not only myself, but others as well.  It pushed a fair bit from all directions, but certainly slowed things down some.  That’s the nice part about power though in that I can kinda ignore wind and just focus on power and my race.

With the bike down, the only thing left to do was run.  The course was as simple as it gets, go out 3.1 miles…then come back 3.1 miles.

And that I did.

I counted only 7 folks ahead of me when I started my run.  One guy was just about 50 yards ahead of me – the rest were beyond viewing distance.  The run is normally where I make up the most ground in triathlons, and today was no exception.

The difference was just how darn long it took to make up that ground. To pass that guy 50 yards ahead of me took 4 miles.  Yup, four whole painfully long miles.  A rather lengthy period for just one place.

We were both really moving – with the first mile being sub-6, and the second not far behind.

After the turnaround at mile 3 though I did pick off a couple of guys that were slowing done a fair bit.  And when I finally did pass that initial person at mile four, it wasn’t like he just disappeared.  No, he just hang out a few dozen yards behind me – essentially taunting me to consider slowing down. 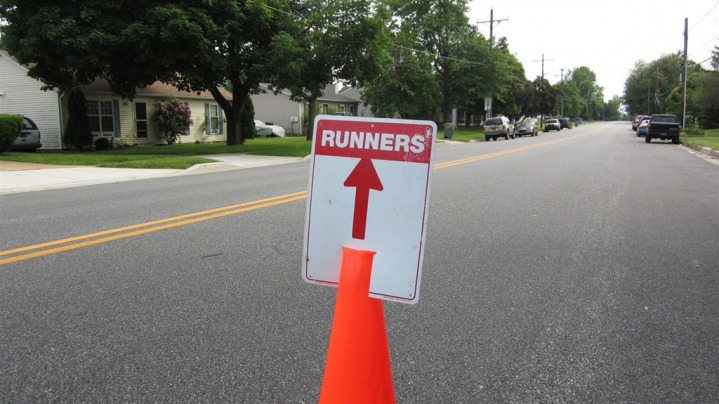 I’d like to say there was some great excitement on the run…but there really wasn’t.  It was just a simple matter of running smooth and solid, slowly building towards the finish.  And since each pass took so long from the initial spotting hundreds of yards up ahead to finally overtaking, it was like watching everything in slow motion.

I ended up crossing the line in 39:49 – the 5th fastest run of the day.  I was happy with the sub-40 run for the 10K, nothing to complain about there!  Overall, my official time was 2:15:10.  I was really hoping for sub-2:10 – but the wind and slower swim killed my hopes a bit there.  But since everyone else was a bit slower from previous years in those two areas, I don’t feel so bad. 😉

Here’s the final totals for the day: 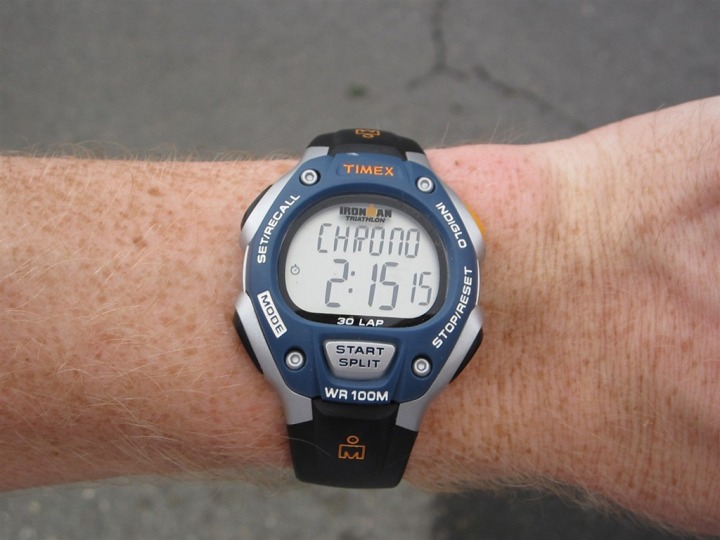 With the passing of the 4-mile guy, that put me into 4th place overall, and 1st in age group…which is pretty awesome! 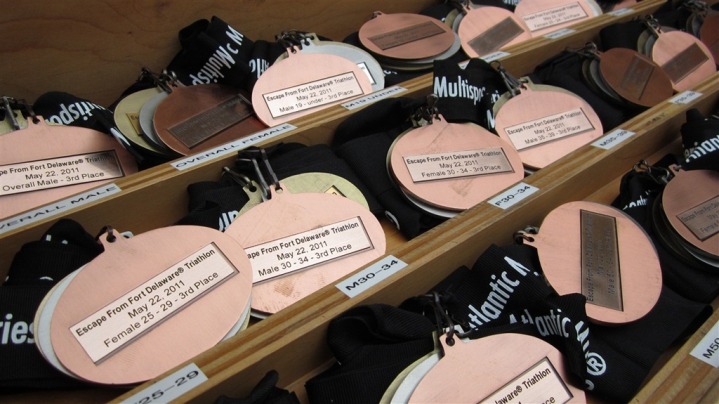 As a result, I got to go hang out on the podium!  Apparently 2nd place guy didn’t get the awards memo. 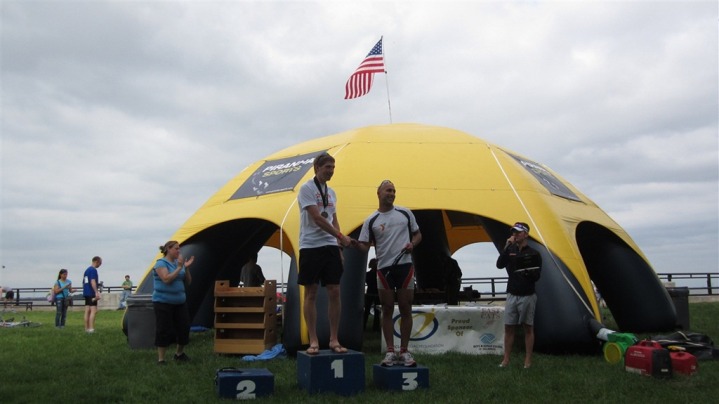 So with that I’ve got three weeks left till Boise 70.3…then I get to relax a bit…oh, and get married.  Woohoo!

Thanks for reading, and hope everyone had a great weekend!

Oh…ps…serious congrats to friend and professional triathlete Lindsey for winning the highly competitive Columbia Triathlon on Sunday.  Rebecca (another DC friend), has a handful of pictures of her up, as well as a few others from the day.  Huge win!