Pants on the ground

Earlier this week I had an early morning swim technique session.  By ‘early morning’, I mean 6:30AM – or as soon as the pool opened to non-high school swimmers.  Which for me…is dang early.  As I’ve mentioned in the past, I’m not an early morning type of person.

At approximately 6:20AM my alarm caught my attention.  This would be about 20 minutes after I had hit the snooze button (in theory once, but apparently twice).  I now had ten minutes to get to the pool (a 10 minute drive away), and change, before getting into the water by 6:30AM.  Riiiiight.

I departed the house in record time – with all clothing on – and quickly made it to the facility by about 6:31, pretty solid actually.  By time I parked, walked across the parking lot, got my access card swiped and got down into the locker room, it was about 6:34.  I felt bad about being late – when I walked into the building I could see Coach sitting on the side of the pool waiting like a lonely kid.

I quickly changed in the locker room in record time and got right out onto the pool deck.

The technique session went how it always does, with plenty of back and forth down the lane, stopping and starting, fixing the myriad of things I do wrong.  About 90 or so minutes later, we were finished and headed back into the locker room.

As I walked towards the locker I noticed a pair of jeans on the bench.  Interesting I thought, but didn’t think any more about it as I got into my locker.

A moment later I realized those bench-ridden almost on the ground pants…would be my jeans, as I determined they were most certainly not in the locker.

Hmm…ok, I guess I was somehow in such a rush earlier and forgot them on the bench.  Good deal, they were still there waiting for me. How nice of the jeans. 🙂

After putting them on I noticed my cell phone wasn’t in my pocket.

…then I realized I had left it in the car so it would continue to get e-mails and texts while I was swimming (the concrete locker room blocks that).  Ok, all still good!

A moment laterI realized I didn’t have anything else in my pockets.  The usual other two pocket occupying suspects would be my keys and my wallet.

…then I figured I must have stashed them in my swim bag, which I sometimes do.

Except…I didn’t.  And my swim bag is pretty sparse, so it didn’t take long to cover that ground.  I checked the rest of my locker (tiny), with nothing but a wet towel to be found.

It’s one thing to have your wallet stolen, but to have your keys stolen too is a whole different ball game.  That elevates you into Grand Theft Auto, which is a bit different than a few dollars in my wallet (which rarely has much cash – let alone US cash – anyways).  Plus, who on earth steals stuff at 6AM anyways?

I relay my concern for lack of critical-path items to Coach, who simply decides that I had managed to just forget everything in the car (keys, wallet…and cell). I admit, at this point the morning was a bit foggy, so it was certainly plausible.

I quickly bailed out of the locker room and upstairs past the front desk.  They kinda looked at me funny, and I kinda looked at them funny.  Sorta a ‘Umm…one second…I’m busy’, with them looking at me like they knew me.  And then I continued towards the front to see if Mr. Car was still gracing the parking lot with his presence.

…and thankfully, Mr. Car was.

As I turned around, the staff kinda slyly looked at me…and slowly held up my wallet and keys.

Wallet! Keys! How I love you so!  I’ll never leave you behind again!  I promise.  Pinky swear.

In other entirely random news…

Remember all those spiffy speed suits that you saw the pro’s using in Beijing at the Olympics?  Well, over the past year there’s been a lot of debate – and some of those suites have been banned in competitions.  Now Finis (one of the manufactures out there) is offloading some of the suits that are no longer permitted in certain competitions. I noticed on their Twitter feed yesterday this little sale – $20.  Yes, some suits are $150…and they’re just clearing them out for $20.  Kinda funny.  But if that’s up your alley, there ya go!

One place where you won’t see this suit – or any wetsuits, is at tomorrow’s Polar Bear Plunge that I’ll be at.  We’re about half-way there to raising a small amount to benefit the Special Olympics program, so if a few more folks donate a couple of bucks – we’ll easily nail it.  Here’s the deets on it here.  It only takes a second, and it benefits a great cause!

Finally – one last item…a big one.  Remember in late December the competition for The Best Endurance Sports Blog?  Well, as you know I was nominated to the Top 10 blogs…but with all your votes in late December while I was travelling – I made the Top 3!   You got me on the podium (for the second year in a row)! I never got a chance to post about it, but just wanted to say a huge thanks for all your votes!  You all rock!

Yesterday, the prize arrived at my doorstep – a Timex Ironman watch. 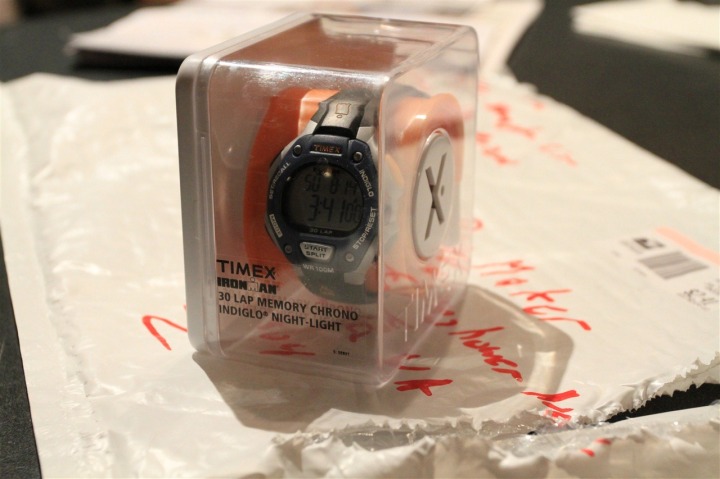 Thanks again everyone, and have a great weekend!

P.S. – If anybody knows of any specific locations in the greater Washington DC area that can do body fat hydrostatic testing (dunk tank for body fat testing), I’d appreciate the contact info (via e-mail is all cool).  I’m looking into doing a post on comparing them with scales…