This past Sunday represented the last race of the year.  Well, the last race I’d ‘race’ anyway.  I still got some goodness coming up this weekend, but that’s just for fun.  You say all races are fun?  Umm…no…not all.  Sure…before, and after.  But not during.  There was very little fun during the race on Sunday.

Anyway…let’s start at the beginning. 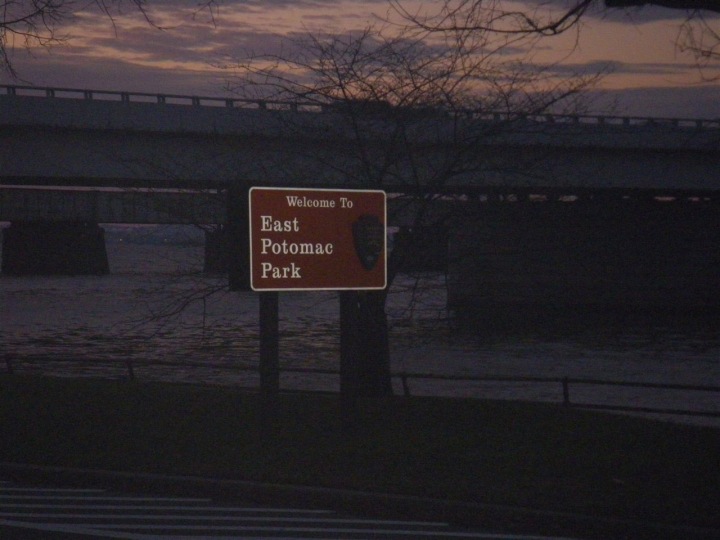 I arrived nice and early, just as the sun rose over the Potomac and nearby Washington DC monuments. 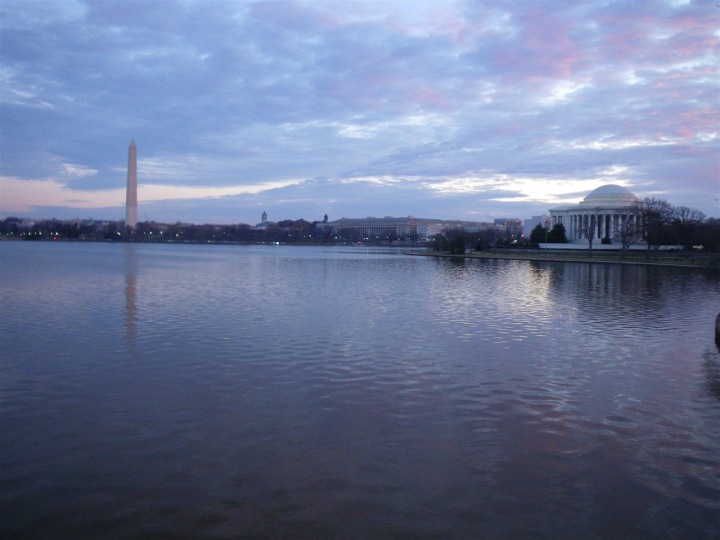 Because this was a nice normal running race, you could actually do your packet pickup the morning of.  It took about twelve seconds.  Sweet!  I got a long-sleeved shirt, my bib, chip and some bells.  Yes…bells.  It’s the Jingle Bell 10K after all. 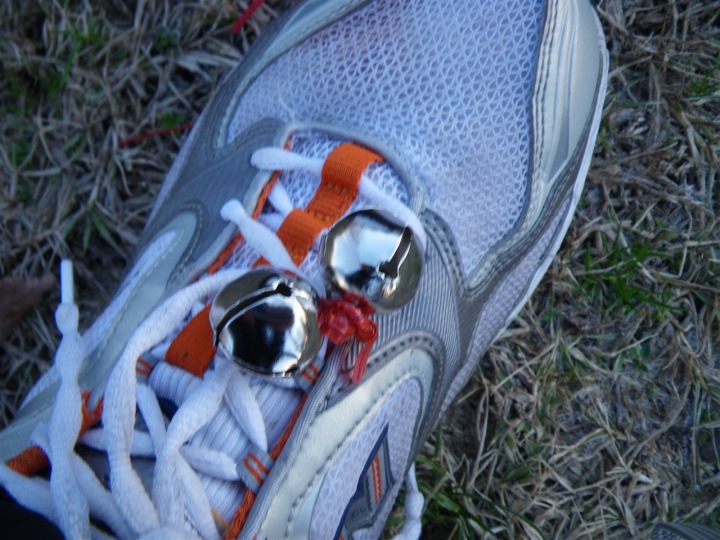 The timing chip was one of the new RFID chips – identical to what was used at the Philly Marathon this year.  Disposable too. 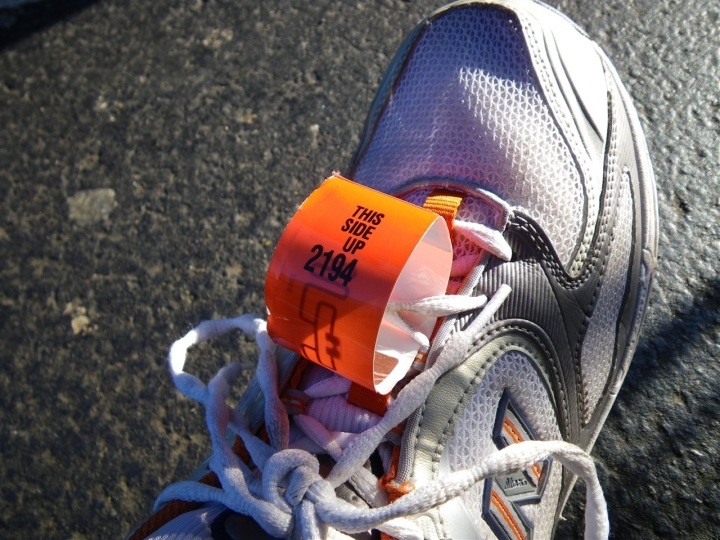 Then I stood around and re-arranged all my clothing for my warm-up run.  It was just above freezing, about 34°F. 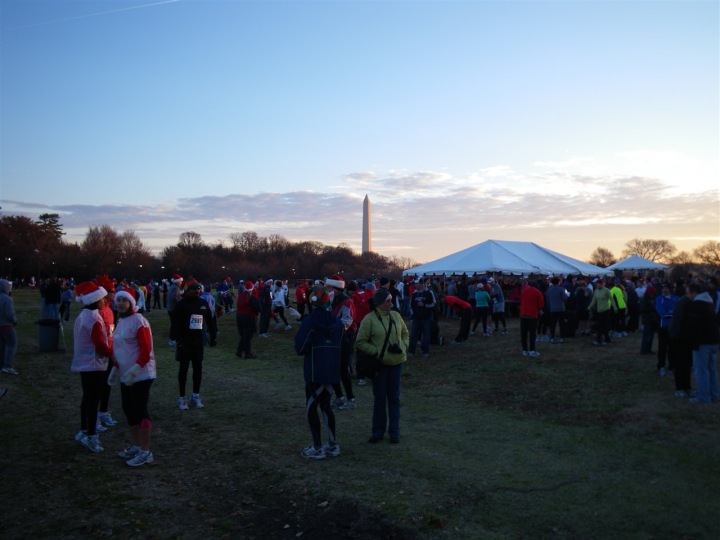 My warm-up run was quite nice.  Went for a few miles around the reflecting pond in front of Lincoln.  Forgot to bring my camera along for the jog – so no pics for you.

Soon enough I was back at my bags and getting ready to run.  I meandered over to the massive crowd of 2,000-3,000 runners and made my way to the front.

I was on the second row this time, the first row was filled with folks who just looked faster than me. 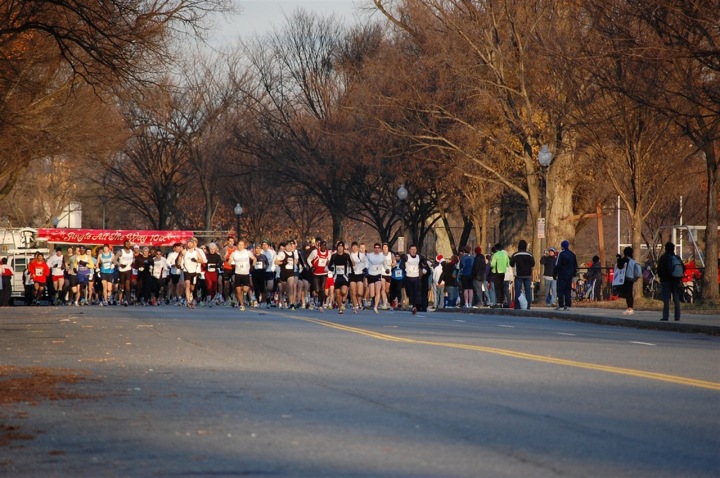 (All these awesome during race photos of me are from photographer Jarrin’s Flickrstream.  Way cool photos!  Even though I don’t know you, and you don’t know me – Thanks!  You can see me in blue in the above photo on the left edge about 4-5 runners in, also below – blue.) 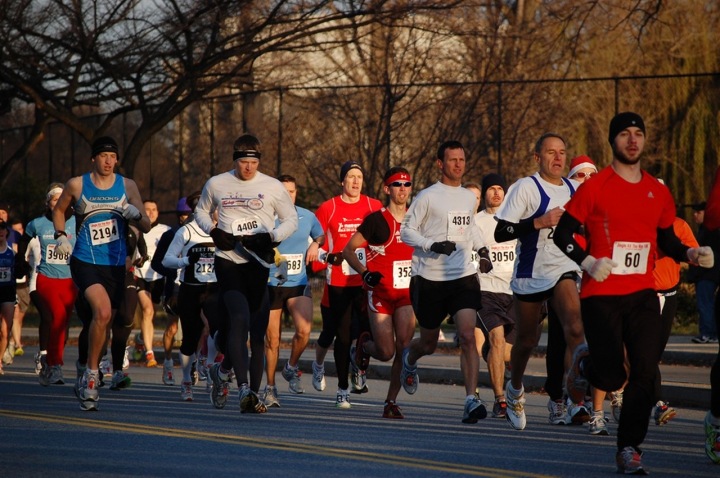 My plan was to build up over the first mile to about a 5:45 pace, so I did that while everyone else tried to sprint past me (and generally succeeded at sprinting past me).  I’d catch them…well, most of them anyway.  By around mile 2 I was easily picking off folks that ran past me early on.  This was going good, I was low in my HR zone but still pretty quick.

It was as I approached mile 3 that things started feeling less than ideal.  The lead woman who was just on my heels pulled ahead of me.  I wasn’t feeling too great.  My HR was around 183, and I found if I bumped to around 185 then I felt like I was going to throw up.  I probably ate too soon before the race (6:15AM light breakfast for an 8:00AM start).  I forgot that I can get away with it for ‘easier’ workouts, but for what is essentially a balls to the wall sprint…food doesn’t work as well that close to the start. 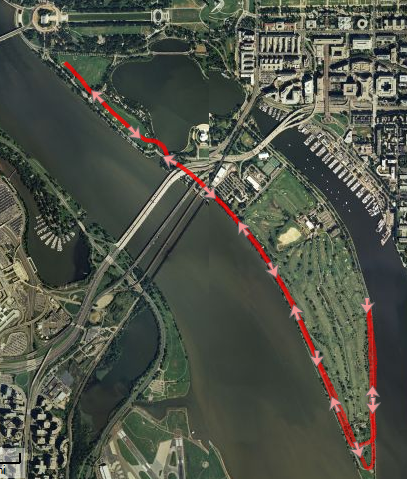 The 5K marker came in a fairly quick 18:17, which put me on pace for a mid-36ish time.  A short bit later we hit the turnaround and starting running towards the throngs of people.

I did pick up the pace a bit, but I was just balancing between cookie tossing and going as fast as my not-so-little legs could go.  My HR was down, almost 10 beats off of the target of 189 for this section though. 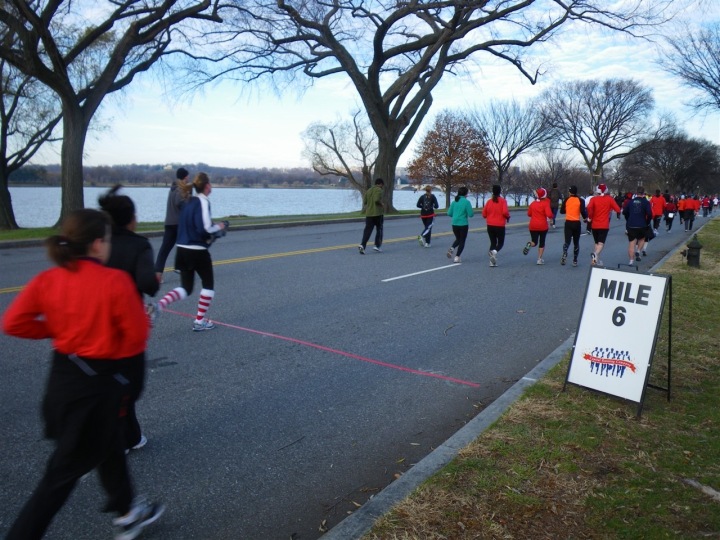 Mile 6 came and I continued with mental math and wondered if I could cover that distance in the time remaining…but alas…not so much.  I gave it as much as I had left in the tank.  But, as you can see from the below photo – all of us in that group were hurting (btw, I had no idea the group was that big).  I’m the one in the blue singlet. 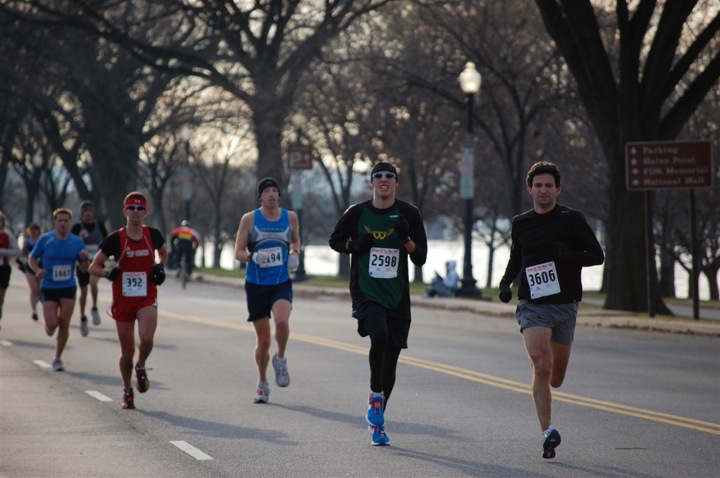 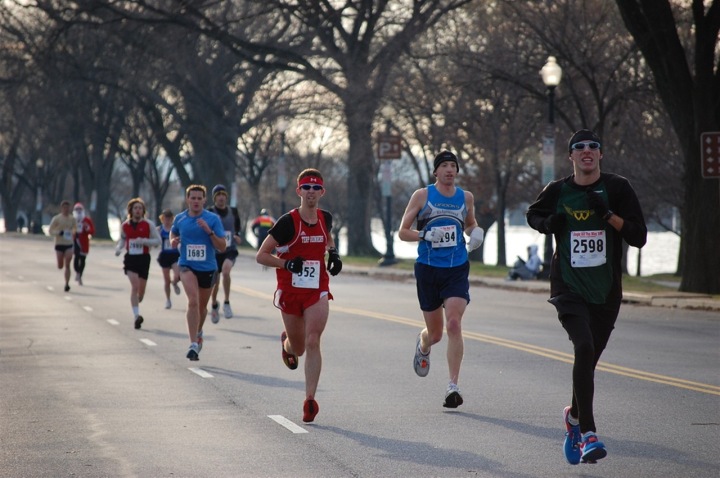 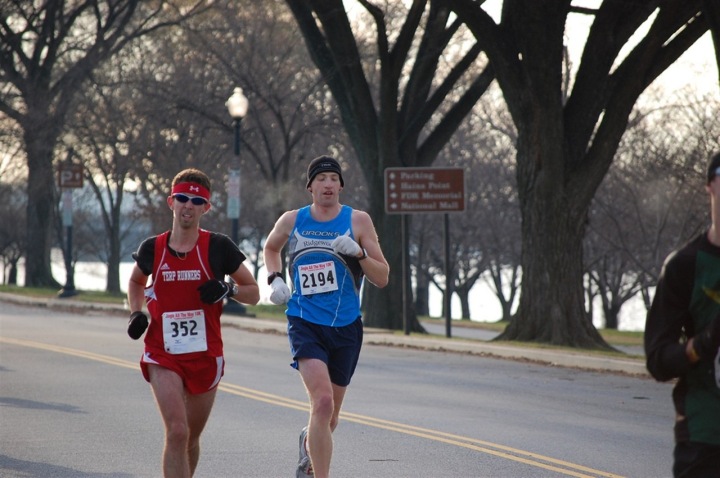 Soon however…it was over.  It’s funny though – once I stopped – I came super close to cookie tossing again.  I felt the ‘surge’ about to occur, but somehow it managed to not go.  Within another minute or two I felt fine again. 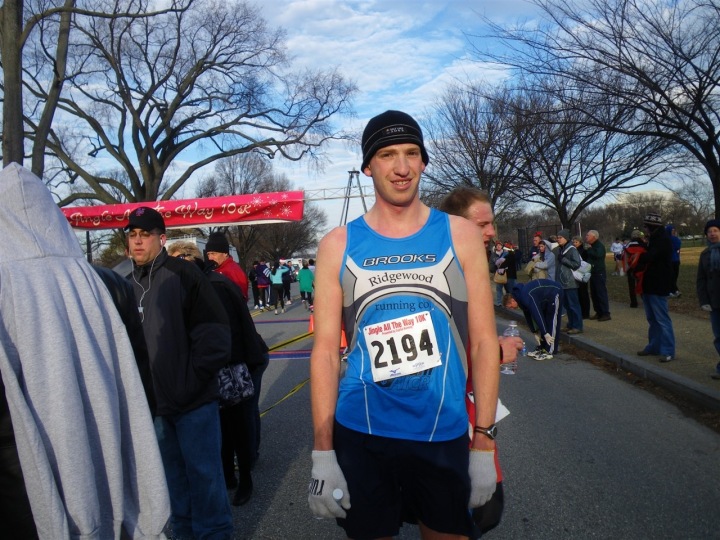 It’s at this point that runner/DCTri/reader person Lindsey said hi.  She looked much calmer than me…pretty impressive especially given she finished a mere 35 seconds behind me.  She.kicked.ass.  Freakin’ haulin.  And…she provided me the link to the above photos of me.  Woohoo!  Thanks Lindsey!

Post race I did misc stuff…but eventually ended up down for a recovery ride (well, sorta anyway) with the girl.  She had a legit workout on her schedule, and I just tagged along.  I even brought a donut along with me for the ride.  Seemed logical, right?  Sprinkles…mmmm… 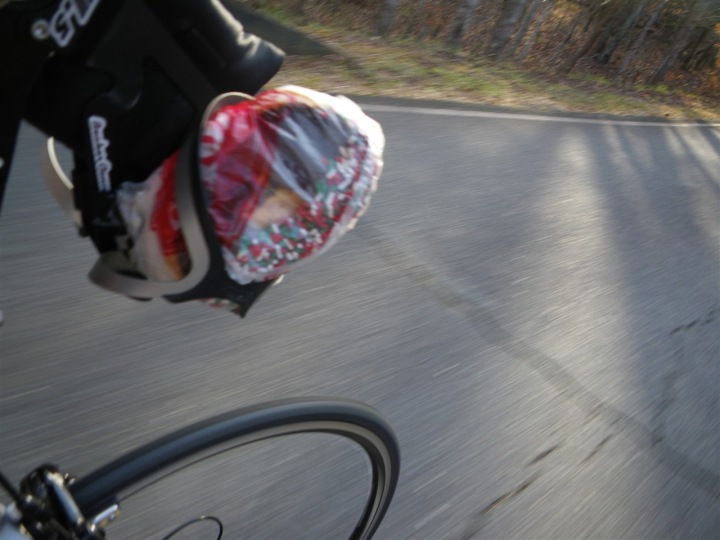 It fit pretty well in the back water bottle holder. 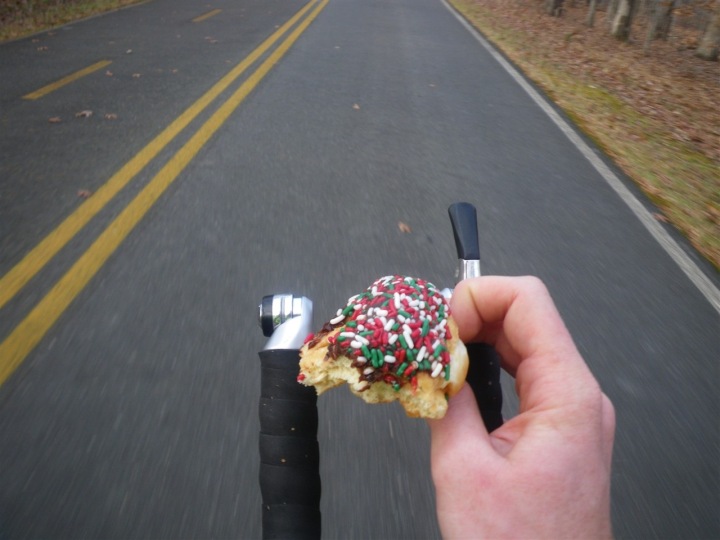 And once you get into aero position, it’s pretty easy to eat donuts too. 🙂