Given tonight was my usual Tuesday 20-miler night, I had about 2.5 hours to think to myself. While I was realizing the error of having a Chipotle Burrito for lunch (holy crap…no really..holy crap – I had to go so bad, thank god there was a functioning, stocked and clean porta potty along the way), I got to thinking about all times long runs have gone bad. Not just so-so bad, but really truly epic-bad.

The reality is that everyone – EVERYONE – has a bad run. Some of us may have months of good runs, but eventually you have a bad one. I seem to be on the once or twice a year program for a truly horrible long run. The key of course is learning *what* caused the FUBAR, and how to avoid making it occur again.

With that introduction, I present you with my top three all-time epic long run failures. I would do more, but I’ve only been running for two years, so I can’t think of too many massive long-run failures.

During the lead up to my first marathon I had scheduled a short weekend vacation in Vegas. The problem was that as with any fall marathon, you’re well into long-run territory by the time September comes around. I contemplated all sorts of ways to get out of running that weekends run – but in the end decided that we’d simply wake up early Sunday morning and knock it out before our noon flight back to the east coast. Yes…you heard that right – wake up early Sunday morning after a Saturday night in Vegas.

But…I didn’t think this would be a big problem, because neither of us drank very much so it wouldn’t be too bad. Except…as you know, I’m a bit of a Foodie and am always interested in trying new foods out. We had secured reservations at Restaurant Guy Savoy, a very high end place consistently rated amount the best in the world (hilarious story at some point about my misinterpretation of the actual cost per person…oh well, it was cheaper than losing a lot of money on slots…ok…probably not on second thought).

At any rate… the ten course dinner consisted of all assortment of completely whacky-ass foods that I’ve never tried before: Degustation of Veal for example. Everything was incredible, and we went to bed relatively early (cough…1-2AM, for a 6AM run). 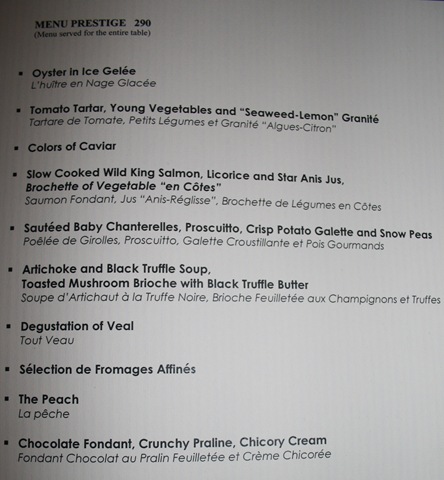 (Actual photo of menu from that night, we even got to take home the menu itself. Here’s a good write-up of the whole meal that we had (by some random person), it’s much more than just 10 courses as they note.)

We got up the next morning, situated the little fuel belt and proceeded to get strange stares as we walked the long hallways leading out of the Bellagio Hotel at 6AM. Cause really, hungover people at 6AM don’t know what to make of the Fuel Belt’s.

We get out on the road and get cooking. Literally cooking – it’s hot out. I had mapped out a random-ass course that took us about 18 miles out towards the airport and back through the middle of nowhere….in the hot desert heat (even at 6AM). By about an hour into it, it was clear that things weren’t going well. Pace had slowed from our standard 10:00/mile pace down to much much slower. Eventually it was a walk. Then a dizzy walk, then a ‘we need to stop and sit down’ walk. And then no walk.

Shortly thereafter, we found one of the many cabbies and simply took a cab back to the hotel. In the end, I learned that foods I can’t pronounce, four hours of sleep and long runs apparently don’t mix well with heat. That should be listed somewhere on a new runners forum: IF you can’t pronounce the food – don’t have it the night before a long run.

I had trained all winter following my first marathon. In a matter of a few months I had gone from an average 10:00/mile pace to a consistent 7:00/mile or so pace. Life was grand! My training runs for this race were over 14 miles each weekend. What was a short 10-miler? And ‘all downhill’ they say! Easy as pie!

My prep: For whatever reason, I got an incredible amount of sleep the night before. About 2 hours. Because I didn’t want to have any middle of the run porta-potty issues I decided that the best way to avoid that was to simply not eat or drink anything that morning. Brilliant ehh? Yes…you can thank me now for that original race strategy.

I got to the start line* and off we went. As DC area folks may know – the GW Parkway 10-miler starts off with a 150 foot elevation drop in the first half of a mile. So folks start off at a very quick pace downhill. Me included. I kicked it up into a 6-minute mile pace and figured I’d be able to hold it.

Except then I found out they lied! It wasn’t ‘all downhill’. Thar be uphills! So I chugged along uphill. By mile 2.5, something wasn’t quite right. There should be no reason I should be tired at mile 2.5 of anything. I drank a gazillion cups of water. By mile 3 I was wondering when the next water stop was. When I saw the next one around mile 4 – I was dying looking for water. And proceeded to drink a gazillion cups of water…and then walk some. Ok, walk a fair bit. It fell into a run/walk thing. My race had officially fallen apart. I ran past the camera, and then walked again. Although – despite my walk-a-lot and drink-a-ton strategy, I did end up with a fairly respectable time. That said – the race strategy was a massive fail, and thus it falls onto this list. Apparently you should get more than 2 hours of sleep, and say…drink and eat something before the race. Go figure.

Here’s a photo they took of me. Yes… I ran for the camera and stopped seconds afterwards. I look horrible (in the white shirt, and about 20 pounds heavier). 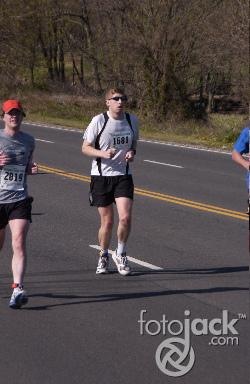 *It should be noted that I actually saw Lesser is More at the start and while running this race. I never said anything, because this was my pre-bloggin’ days. But…just had to note it.

This would be my most recent epic run long-run failure. Must be something about this particular weekend in September (same as the year prior in Vegas). It was a hot and humid that weekend. Way humid. And way hot. I was running the Pacers group.

The run started off on flat ground for about 1/2 a mile, and then shot up the side of long hill probably lasting close to a mile. At the time I didn’t realize that the particular pace group I had joined that morning was going shorter than the 20 miles I had planned. They were going about half the distance. So off we went. At a fairly good clip, motoring up the hill. At about the second mile marker, I already knew things weren’t going well. I had gone up the hill way to fast, and the next few miles were full of ups and downs. At some point along the way it occurred to me I didn’t bring any water…or really drink or eat any before hand. Nor did I have any gel packets. In fact… I had nothing but me. It didn’t take long to see the effect of that…check out the splits by mile:

Yes…complete crash and burn. I ended up walking all the way back. Not ideal at all. Long long walk. I learned that when it’s 92* and nearly 100% humidity you should apparently hydrate.

Oh…and one last thing – tonight at Pacers they had extra of the below posters, so I got one. AWESOME! Thanks! 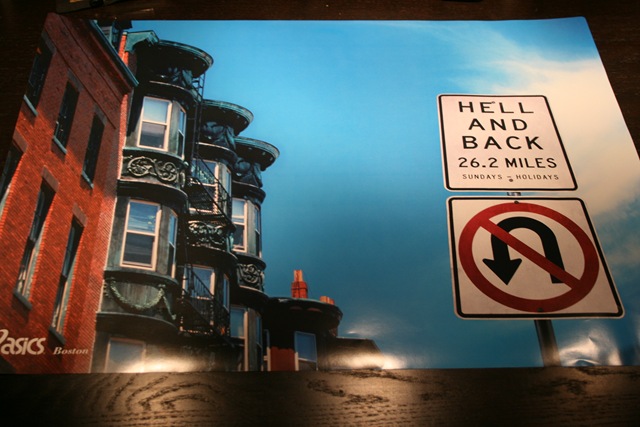