I have arrived.  Well, I’ve arrived in California anyway.  I’m not sure I would arrive to otherwise really.  Although I swing through the state with an odd regularly (at least once a month it seems somehow), I tend to forgot how much I enjoy most of it.  Mostly the sections away from cities (except San Fran, I like that). 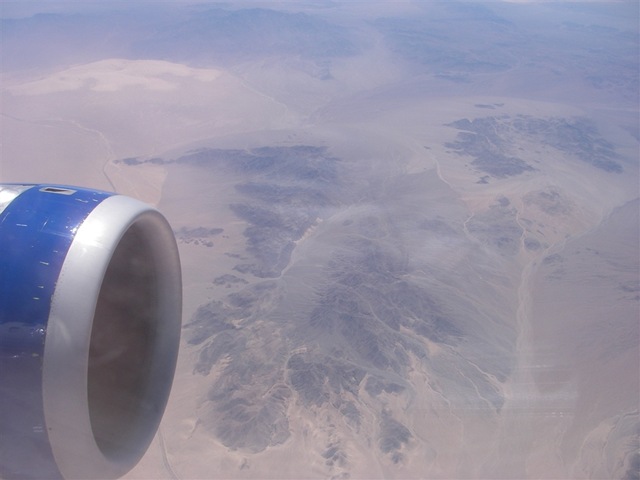 While riding the little Airbus Twin out here, I was looking out the window over a rather nice day and I’m slowly increasing my desire to cycle across the country someday.  I’d want to do it from East to West, and in the Spring.  But…that’s a different post for a different day.

Where have I arrived??? Wildflower of course!  I’m here to both have fun, as well as to continue my training march towards Ironman Canada in late August.  I’ll be doing the ‘Long Course’, which is a Half-Ironman.  There is also the ‘Short Course’, which is an Olympic Distance event, and finally an Offroad Tri as well (Mountain Bike). This time I have the tiniest of tapers (a day or two) – but that’s somewhat being negated by a slightly sore throat/stuffy nose.  Oh well, win some lose some. 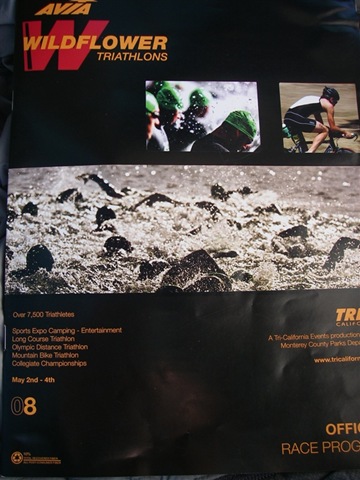 After the cross country flight from IAD to LAX, it was a quick hop to San Luis Obispo.  Then a swing by the grocery store for food on the hour long drive up to Lake San Antonio.  I also had to pickup a propane tank (TSA doesn’t like me taking those on the plane).

No – I’m not planning on putting boosters on my bike (although I’m gonna need it up the big long ‘Nasty Grade’), but I need it cause I’m campin’.  Wild West style.  Actually, not that wild west-ish really, cause it’s car camping…in an rental Impala.  But still – do you know how much of a serious PITA it is to both pack a bike as well as a full compliment of car camping gear (Stove, cooking gear, eating stuff, etc..)?  Just try sometime.  Pain.In.The.Ass.  But it’s fun!  It’s like a big summer camp atmosphere here.

As I approached the lake I realized I was on the bike course.  It’s very scenic…and hilly.  Really hilly.  But there will be some screamin’ downhill sections – like this one. 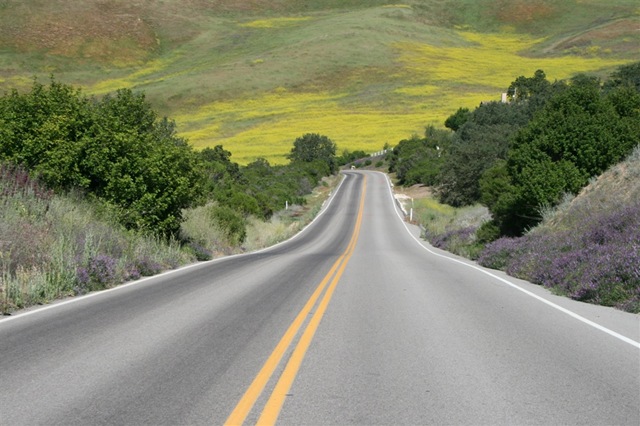 And then there will be some rather painful ones.  Like the one just under a mile from T1.  You know you’re in trouble when it says “Long Bike”. 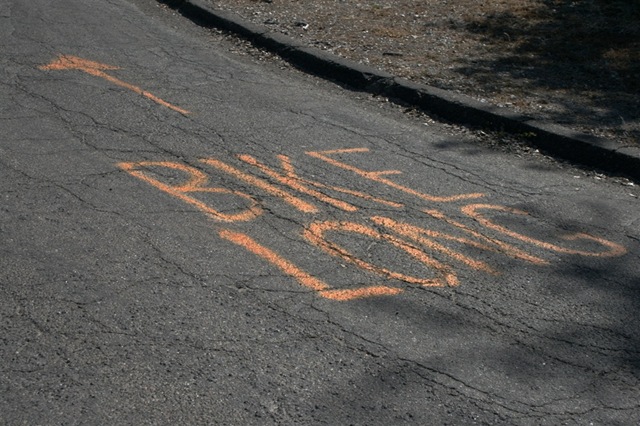 Here’s the main entrance to the park/grounds. 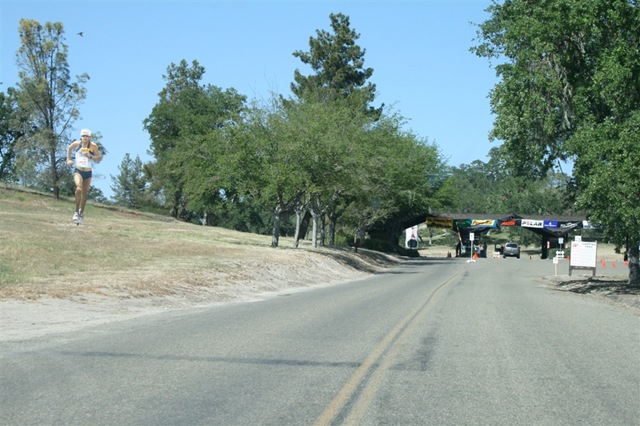 A few hours after landing I pulled into the campground area and picked out a nice spot.  The one advantage to coming out a bit earlier than the rest of the crowds tomorrow.  Plus, I got a super-close by spot.  In loop C, just a few hundred yards from the entry road.  Here be my home for the next 3 days: 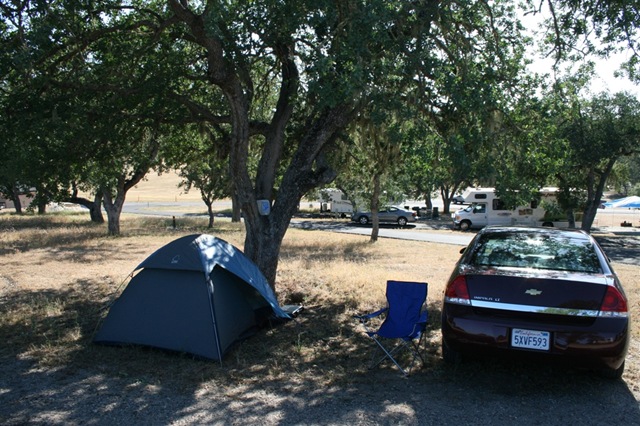 Note the big swimmer dude in the photo below.  They have them spread about all over the place – swimmer, cyclist, runner.  Kinda cool.  Actually, I didn’t notice it till now – but you can just barely see where I swam to.  I went out to the left (out of photo), and then about 200 yards out, I turned right and went about 100 yards behind that little white dot (boat) in the photo.  The upper dot. 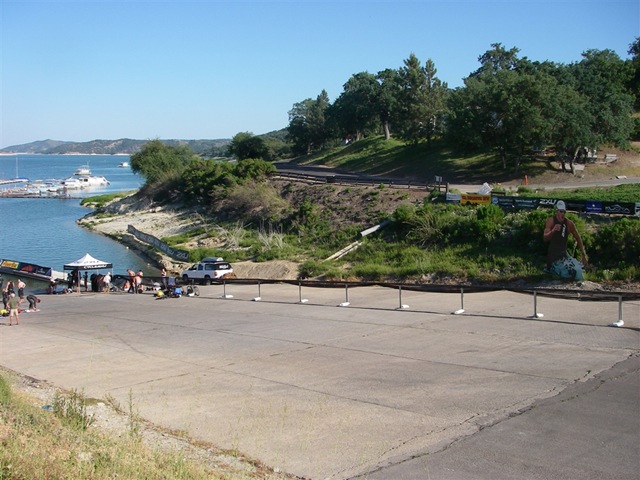 Post-lake festivus, it was back to my site to be lazy for a bit and more unpacking.  Oh, before heading back up to the campground I lazed around in the 80* weather near the lake.  It was nice.  Btw, I saw this sign.  I think it’s offering a choice – at least the way I see it.  I think I’ll choose the boat option, thank you. 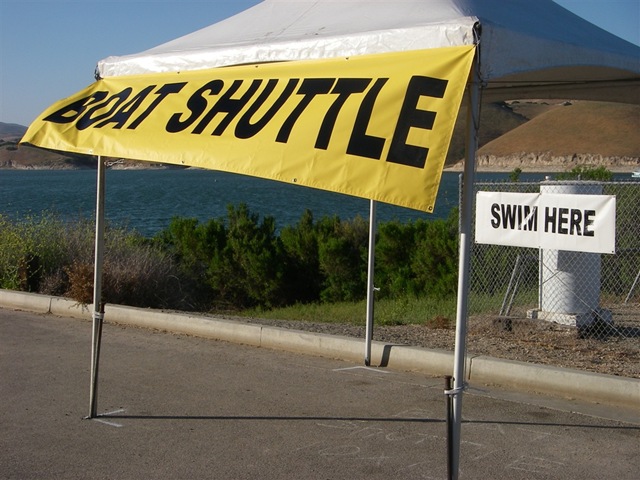 Then time to get in a nice 40 minute run by some of the campgrounds.  It’s a bit hilly btw.  No flat ground here.  It was a nice run though.  Just me at dusk, still warm, but no direct heat.

Then it was cookin’ time.  I only have a very limited cooking set with me (just one pan), so I made due with potatoes au gratin, chicken breasts and red peppers.  Nuttin fancy, but it hit all of the ‘essential’ food groups.  Oh, and I made some Chocolate milk. 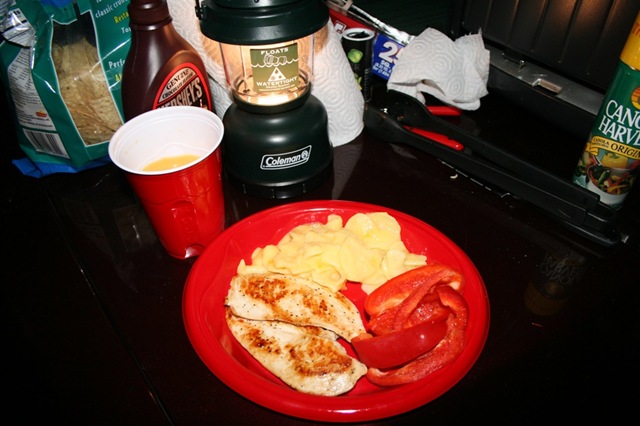 After that, well… it’s 10PM now.  And I don’t have Internet at my campsite, so I’ll have to post this in the morning down by the Expo where there is Internet.  Oh well.  Also, I’m sorry I’m behind on blogs – I’ll catch up soon.  I can write & read offline, but I can’t comment offline. 🙁

For those of you wandering up/down here – swing on by!  I’m at the top of Loop C, under the tree (the first loop C, just after entering the main gate).  Just look for the water jug in the tree next to the stylish Malibu Rental car.  Knock on the tent and I might respond.  Single females in my age group do not have to knock.

Also, you can e-mail me at the address on the right side and it gets to my phone, which kinda sorta barely works.  Kinda.  Or just leave me a piece of ‘tree mail’.  Either way.  Have a great weekend!

Oh, one last thought.  The stars are incredible from here. California Dreamin…