So after only one workout today – 3,000 yards (split in two due to a minor incident at the pool, I ended up lounging on the pool deck for an hour) – I had more energy than I knew what to do with.

I remembered yesterday’s post by Monica related to food, and decided it was time to cook something.  So this post is for you Monica – even though you can’t enjoy it.  Not exactly my problemo that you’re 3,000 miles away. 😉

A not-so-quick trip to the grocery store (I basically wandered around aimlessly for about 45 minutes picking up things and deciding what to cook), I was back at home ready to cook.

I decided on Corned Beef for the main course…but with a twist.  And because I couldn’t decide while at the store what would go well with that as a appetizer – I just went with a mozzarella caprese, also with a twist.

First up was the appetizer.  I’m a big fan of all things mozzarella, so I decided to take it vertical.  First I laid down a swirled base of reduced balsamic vinegar.  Then I diced up some tomatoes, picked some fresh basil off the little plant, and then carved out a piece of mozzarella.  Finally I drizzled some extra virgin olive oil over it, and a touch of salt and pepper to bring out the flavors.  Oh, I used a circular mold to put it all together. 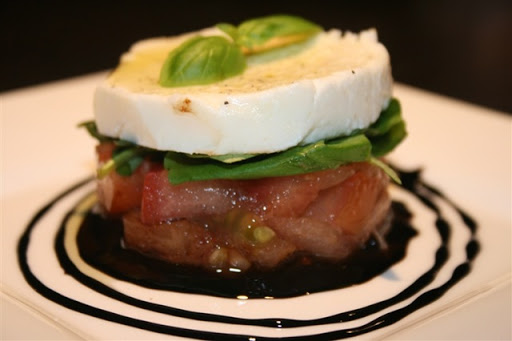 Then it was time for the main course.  Traditionally Corned Beef is served with carrots, potatoes, cabbage and onions.  I wasn’t feeling traditional.  So I made a bit of a modern twist on it.

Sure – I had potatoes, but I did them two different ways.  The first way was to julienne them super-thin into little strings.  Because you can’t functionally julienne cabbage – I substituted it with cucumber.  Following which I also did carrot and beat (why beet?  Because it looks cool bright red).  With the leftover cucumber, beat and potato I made little chips – kinda like the Terra chips you see at the grocery store. 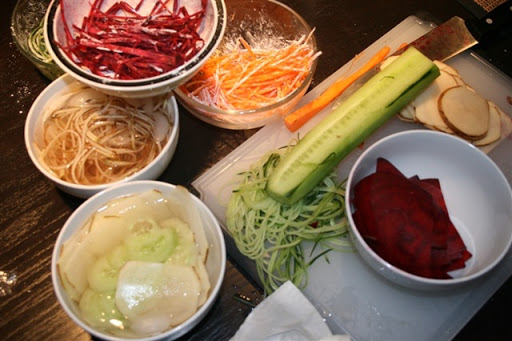 After much cutting and nearly cutting my fingers off on the Benriner, it was time to deep fry the strands.  Quite simply you deep fry them for a short while, producing a small nest of crunchy vegetables.

Meanwhile, the the corned beef had been cooking away all content for the last three hours.  Also, I whipped up some mashed potatoes.  But since I was tweaking things a bit – I went with sweet potatoes.  They were soooo good (of course, the butter and heavy cream helped).  And here’s what it all looks like assembled. 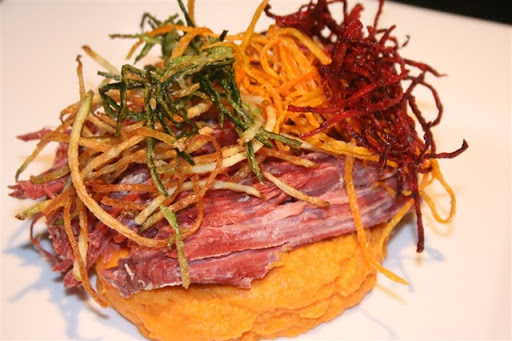 (The vegetables on top, from left to right: Potato, Cucumber, Carrots, Beet.  Followed by meat below it and finally sweet potatoes on the bottom).

Following which… I was feeling lazy.  I had contemplated cooking up some chocolate cake.  But settled instead on Ben and Jerry’s. 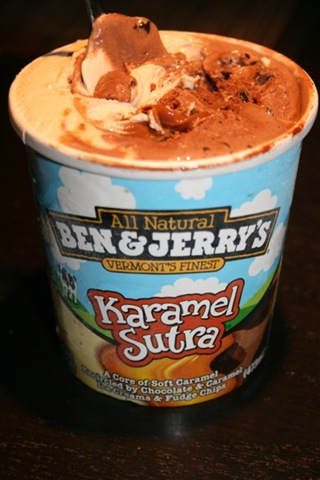