I wandered out yesterday to the Dulles Expo center to check out the National Ski Show.  Coming from Seattle, I’m accustomed to convention centers FILLED with ski companies, resort booths, and tons of local retailers as well.  These are huge events in the Northwest where free stuff is abound, and there are tons of things to do and see.  Given my experience with such events, I budgeted about 90 minutes before the scheduled showing time for this years Warren Miller movie – and figured I’d have time afterwards if required to continue picking up free stuff.  My main point in driving out there was the Warren Miller movie – the only place locally it was showing was there.  So I got my expo ticket and headed in. 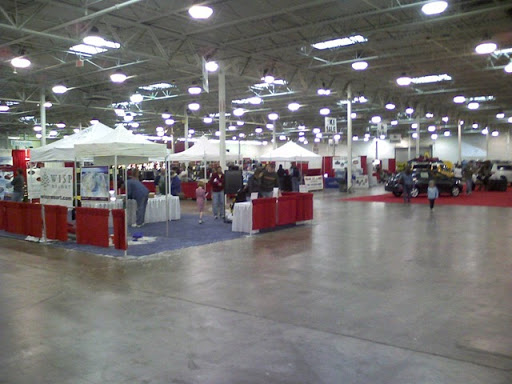 Yes.  12 minutes is all the time it took me to browse through every booth and pick up all required free items.  And that INCLUDES the time spent taking a picture at the jump/ramp thingie outside (they trucked in snow from Wisp). What you see in that picture is everything.  There are no hidden booths behind other booths, that’s it.  I did get three free small pieces of chocolate though. Woohoo! 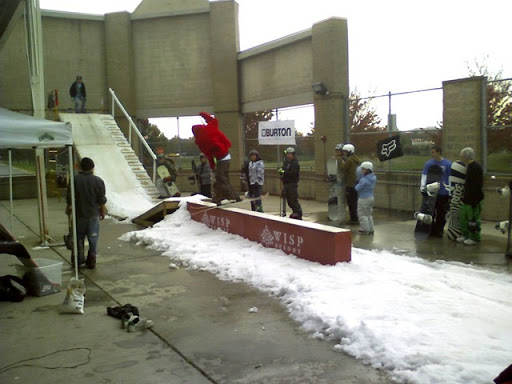 I had to manage to waste another 75 or so minutes until the showing started.  Doh.  There simply wasn’t much there.  I guess that’s probably because when it comes to downhill skiing, this particular region is less than ideal (read: royally sucks).  There are only a few mountains around here, and there all fairly far away (at least compared to the 45 minutes from downtown Seattle to “The Pass”).  They did give you a free life ticket at one of the local resorts – but it’s only good until Dec. 21st, and…oh btw – they ‘might’ open as early as the first or second week of December.  Seriously – 10 days to use the ticket?

Anyway (side note: I just said anyway instead of anyway’s because a certain blogger recently commented that “anyway’s” drives them crazy, you know it’s funny how there’s all of these little grammar rules that you remember – and most of the time you can point to a single comment that someone made at some point in your life and from then forward you never made the same mistake again)  oh crap, one big ass run-one sentence later, let’s try that again.

Anyway, I went into the ‘theatre’ (read: room with projector) and watched the film.  It wasn’t bad.  It wasn’t their greatest work either though.  But the 2007 winter was a really tough winter for skiing.  There was virtually no snow in Europe, and the West Coast also had virtually no snow.  The East Coast wasn’t really any better.  So filming options were super limited.  They focused heavily on Alaska, with Japan, Dubai, Whistler and Switzerland tossed in to mix it up a little bit.  I did the Ski Dubai thing last November – pretty cool.  I’m hoping to see more diversity next year – perhaps some South America, maybe some West Coast scenes (assuming snow cooperates), more Europe.  I read in the free magazine we got that they wanted to do filming in Russia, but the weather didn’t cooperate. That would have been cool, I haven’t been there or heard much about the skiing – but I hear they have snow!

Overall the short drive was worth it, I just wish I had cut out the expo time before.  The ski ramp above was kinda neat to check out.  They just needed more vendors at the expo.  Get ski and boot manufactures there.  Get some more destination resorts (like in Colorado).

As an FYI, the same expo is up at Philly next weekend, so if you’re up there for the Philly Marathon you could make a side trip and watch the film (for sorta-free).  There were free stickers – though destined for the bike case, so there is some more upside there.