Last weekend (well, weekend prior), we held the 7th annual DCR Open House! These winter editions are usually held in early December, though we did one summer one in 2019 (something we hope to continue in summer 2023 – more on that later). The DCR Open House is our way of opening our doors up and letting people check out the entire DCR Cave (in Amsterdam), poking at gadgets and chatting sports tech. However, before the evening open house we’ve got the morning fun run, where we head out for a nice group run around the city. Oh, and did I mention we’ve got not only free food and drinks, but also giveaways?

As is often the case, people come from all over – both Europe and the world. The winner for the furthest distance travelled was Tasmania. Albeit, he was on vacation in Portugal and then made a diversion up here. But others from the UK, Germany, Italy, France, Belgium, we even had a Canadian who wasn’t the girl, and many more. Plus of course, plenty of folks from here in the Netherlands.

(A video from multi-year open house attendee/runner WayeOfLife, who was also Plogging, which is where you pickup/collect discarded street trash along the way. His video covers both the morning run and the open house behind the scenes – give it a watch!)

Unlike the evening open house, the morning fun run doesn’t actually start from the DCR Cave. Rather, it starts at the edge of Vondelpark at All4Running. They’re a local running shop that has hosted us for a few years now. This gives people a place to store bags/gear during the run, as well as the opportunity to pick up more layers of running clothing when they realize how cold it is. It was the coldest morning of the season yet, for our run.

Plus, they’ve got a nifty running efficiency measuring sensor plate inside that you run over, via a small section of track (half-way down the track). One of these days I’ll write something up on it. 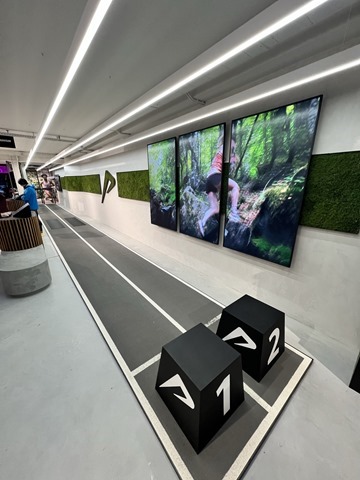 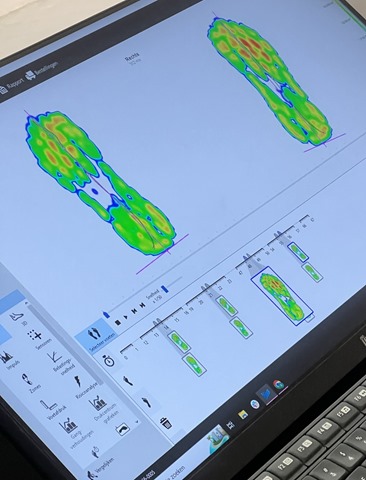 I suspect it’s due to that morning cold snap that we had a bit higher no-show rate that morning than usual. Though, everyone agreed it really wasn’t that bad once you got going. First up, a quick snapshot out front. Notably, in the photo you’ll see a few cyclists to the left. Turns out they arrived right as we were heading out. I didn’t even notice they were still on their bikes and hadn’t gotten running-ready yet. Fear not, they decided to cycle along instead (a fact I learned later when I thought it was odd we had a few people slow-pedaling with our group). 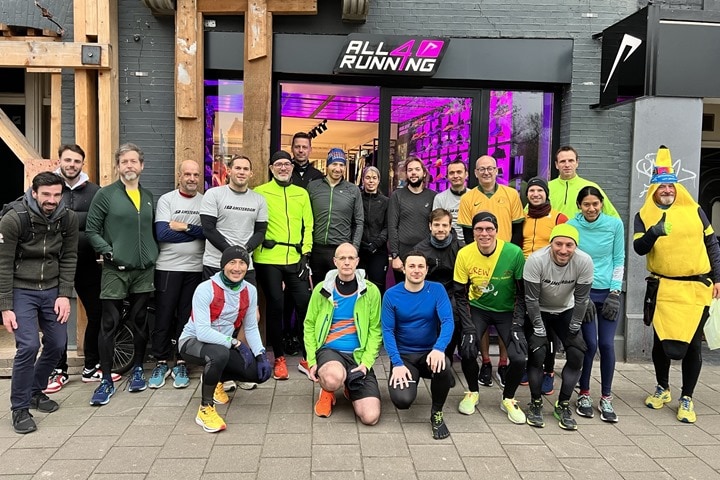 The banana you see there is Paul, who was also picking up trash along the way (again, check out the video above for an explainer on what he does – it’s great!). We started off by heading into Vondelpark, which helps cut across the city. 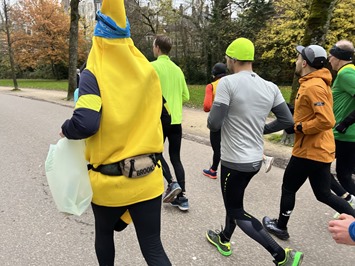 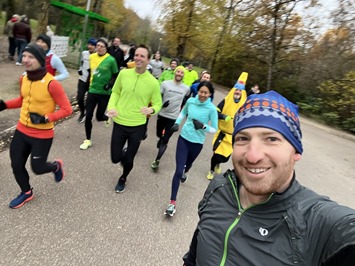 We popped out the other side of Vondelpark, and kept on chugging. I varied the route this year a bit, for funsies. 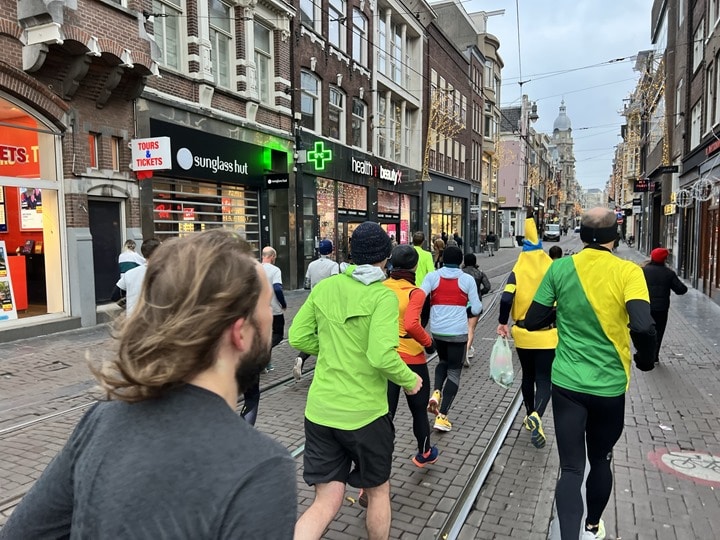 Speaking of funsies, we all managed to successfully avoid getting hit by the tram. In this section, the tram slow-rolls it (usually) down a tight pedestrian-only street. Later in the day, this street is packed, but early-morning it’s pretty quiet still. 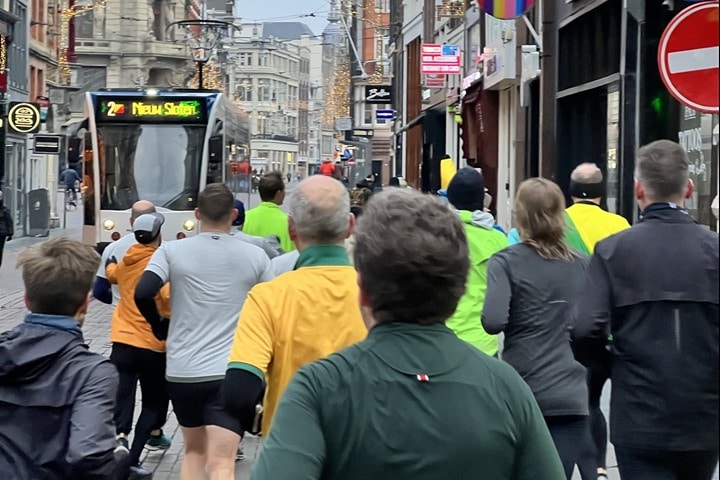 After that it was through a pretty section of town with picturesque Amsterdam row houses: 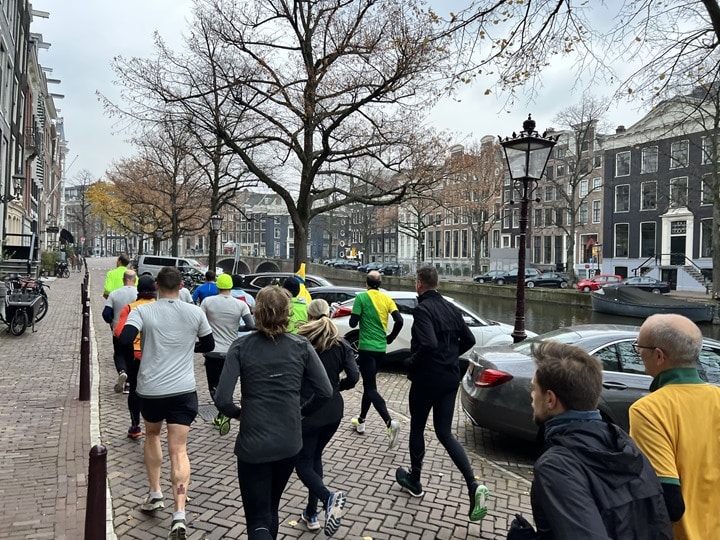 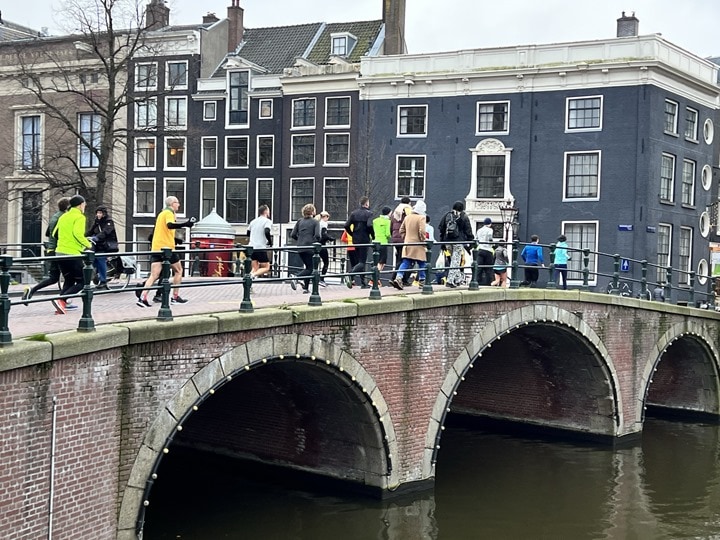 We stopped briefly in front of the Rijksmuseum, though the IAMSTERDAM signs have been gone a few years now. In fact, we got lucky a few years ago in that the sign was being removed the next day. I almost considered grouping everyone atop the small bridge over the ice skating rink, but that seemed fraught with potential failure. 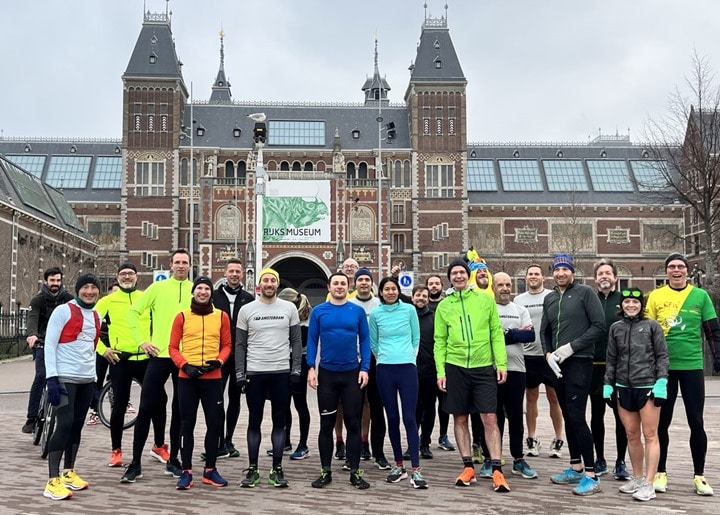 Another idea I considered was stopping at the fresh Oliebollen (donut) stand. Sadly, it was still a bit of a ways away from our finish area, else I’d very much have done it. Next year! 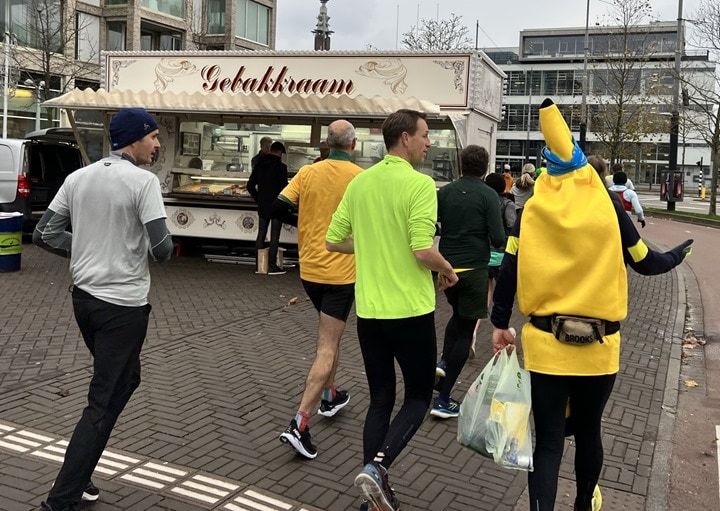 Next, we got into Olympic Stadium for a loop around the track. Super cool!

I’ve noted before that there are actually offices on the bottom (field) level all the way around, mostly sports-related companies/businesses. Each of those glass panels you see are the backs of the offices. Everything from Brooks, to local gyms, to a cryo place, and on and on. Sadly, when we were initially scouting locations for the DCR Cave, there weren’t any vacancies. That’d have been such an amazing/dream location for it – overlooking and walking right out onto the track. 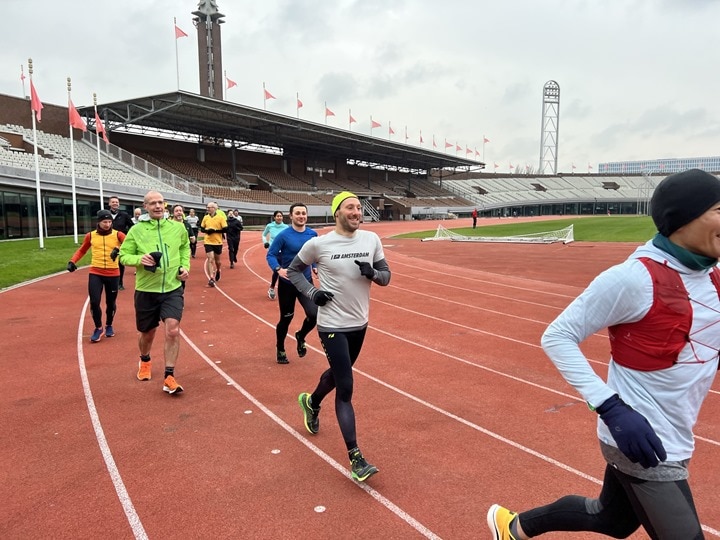 From there we headed back to All4Running, where they had goodie bags for everyone as well as some drinks. Again, the crew there was awesome, and even during the run one of their guys took a ton of photos from all over the place, sprinting-out an interval workout like nobody’s business! Like this over-the-bridge photo he took by not just sprinting ahead, but doing so all the way to the onramp to the bridge off to the side, centered over us, and then back down again to catch-up to us. 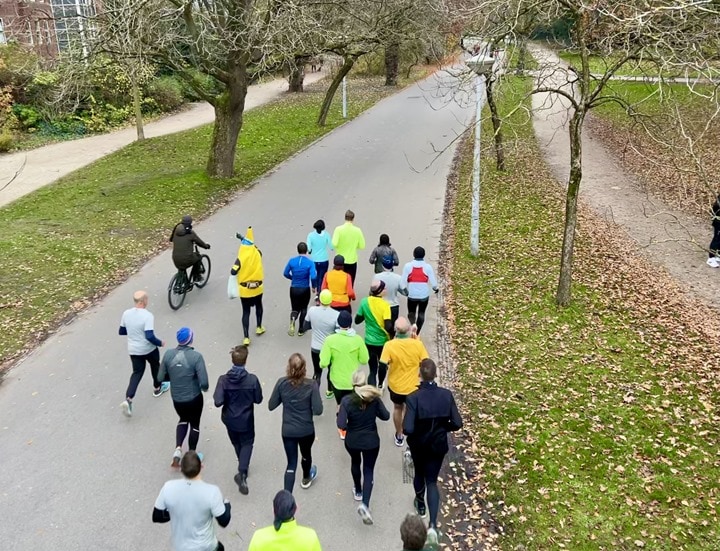 Thanks again to them for hosting us!

Now the way it works is that after the morning run, folks are free to go off and explore Amsterdam for the day. With many people coming from out of town, it’s a good way to check out the city. Be it ice skating, the Amsterdam Cycling Film Festival, or just eating lots of oliebollen.

Then, in the evening you’ll pedal (or run, or if the weather is right, skate) your way to the DCR Cave. No kidding, I’m actually directly on a canal, you could do it today in fact. In any case, pedaling it was for some: 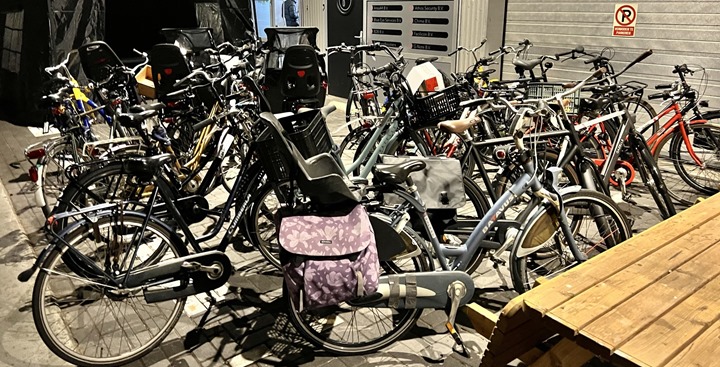 Now sadly, I didn’t take too many photos. I’m always horrible at remembering to take photos during the open house. Next year I think we just need to hire a photographer, because I’ve got like 5 photos of my own, The Girl took like 3 photos, and Des took I think 1 photo. Collectively, for a bunch of people whose job it is to take photos…we were horrible at it. 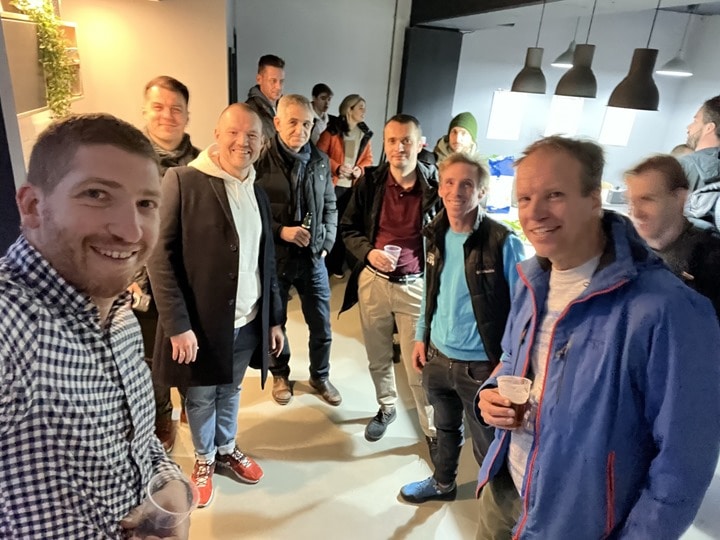 The idea with the Open House is that you can go off and explore the whole cave, as well as check out and test most of the devices. For example, the smart bikes were all out (KICKR V2, Tacx NEO Bike Plus, TechnoGym Ride), plus the new Zwift Hub and more. The Cannondale Synapse Smartsense bike atop the Zwift Hub was a very popular talking point. 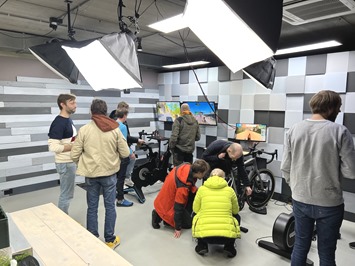 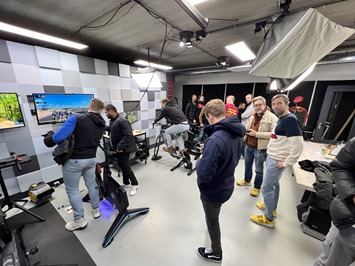 At the bar/gondola we had The Girl (Bobbie), doing her magic. 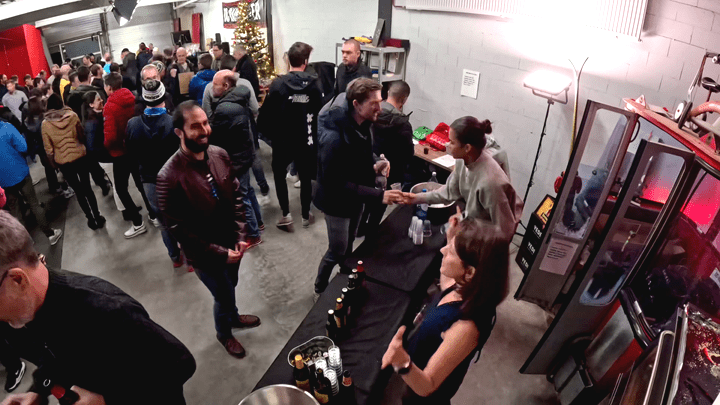 Of course, this night fell during one of the World Cup games, which we had on the TV up in the main office area. During halftime, we kicked off the Q&A section as well as giveaways. Speaking of which, you’ll see DesFit on the stage there. 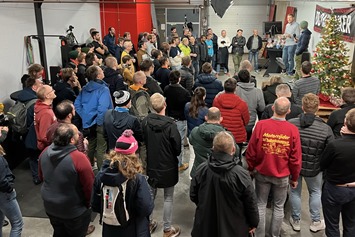 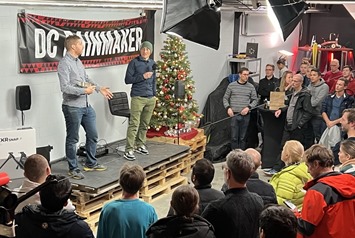 He flew over from Colorado (as an Amsterdam stopover for another trip), and for once in his DCR Open House life, he wasn’t stuck on cleaning duty ahead of the event. We actually got it done, which, btw, was a solid task given it had been three years since the last DCR Open House. A lot of stuff kinda just piled up!

Now, as I said, there were also giveaways. This included items from Ride Out (local bike shop that was hosting the Amsterdam Bicycle Film Festival), as well as a slate of other goodies we had around the DCR Cave, including notably things from those piles I had to clean-up.

That included things I bought extras of, including some trainers. I had bought a KICKR SNAP V2, Flux S, and Flux 2 – but never opened those boxes. I usually buy most things after release, to eventually put into the inventory for update testing/etc… However, in this case these newly bought units never got opened, and they were much better served with others. So, I gave them all away. Look – I actually managed to get a photo with this winner of the Flux 2! 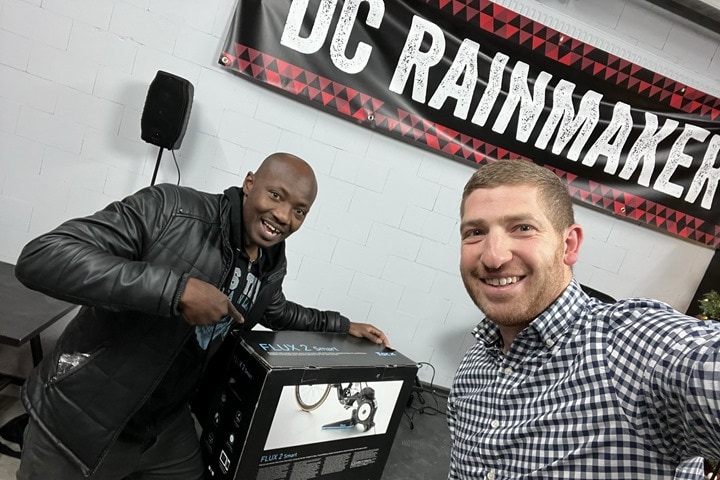 Unfortunately for him, and in fact all three trainer winners – they all had elected to take the train this night. Which, is a less than awesome experience to lug a 23kg/50lb awkward box with you down the street, then up to the train platform, then on the train, and then that entire process again at the other side.

Fear not though – I hooked him up with a heavy-duty blue Ikea bag…which, I suspect probably snapped in half about 7 meters outside our front door. I tried!

Finally, as always, we have to include a picture of Harry. Harry has the record for the most open house attendances at 7 (6 winter, including Parisian ones, + 1 summer edition). In fact, he even did a run-by of the DCR Cave and took a solo selfie in front of the door last year (when we didn’t have one). 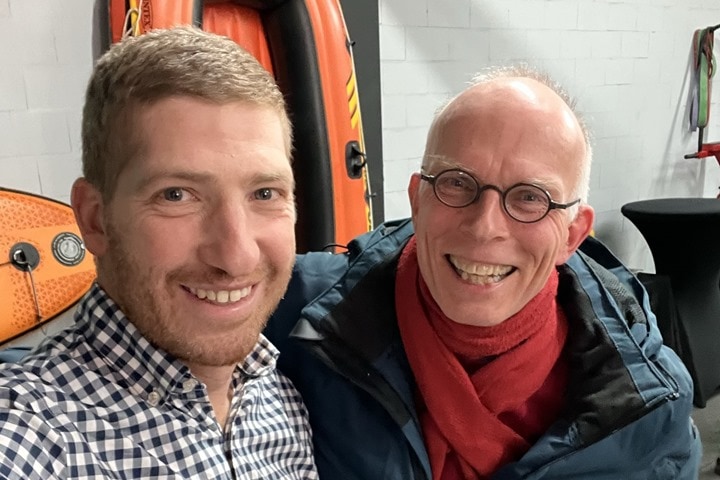 Once again, a huge thanks to everyone who came to the Open House or morning run. It was great getting to chat sports tech, and enjoying both the morning run and the evening time.

We’re aiming to resume the summer edition this summer again, ideally with much more notice. It’ll probably be in early or mid-July, but again, we’ll get notice out in late spring. For this December one, we were a bit skittish to announce it earlier in October like we usually do, in case Covid numbers spiked. Thus it was sorta a late-announcement only 2.5 weeks prior. But for the summer we’re aiming to announce it much sooner, and it’ll have (at a minimum) a group ride, and maybe some other activities tied to it.

Again – thanks everyone for being DCR Readers, we appreciate it!