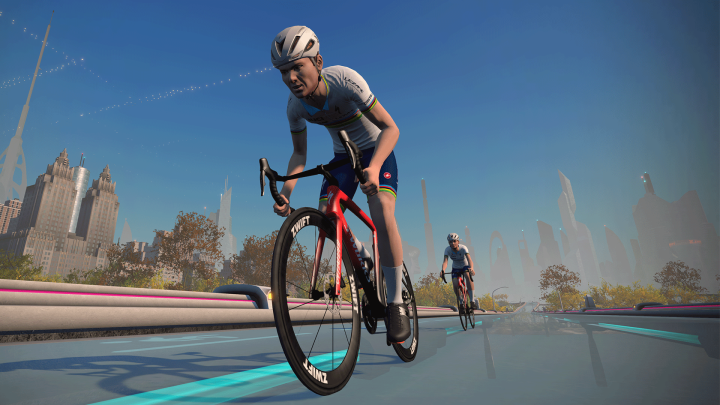 The UCI has announced that the Cycling Esports World Championship will be held February 26th, 2022, on Zwift. The last part being more notable than the date, as there was actually no guarantee it would be held on Zwift. In fact, in my discussions with the UCI – they noted that there was an entire process they go through to determine which platform it would be held on, as there are obviously numerous ones that are capable of hosting such an event. We saw Rouvy and Bkool both host major events over the course of the pandemic, with the sports’ top-tier pro riders on them.

Still, there’s no questioning that Zwift is the most prominent indoor racing platform (though not the biggest indoor cycling platform– that goes to Peloton and iFit by substantial margins). And we’ve seen Zwift continue to level up their productions over the past 18 months, especially with regards to how they construct things like camera angles that make the races more exciting to watch than a handful of static camera angles. And while audiences might not be there for most streams, the company is clearly playing the long game in this.

From a timing standpoint, the late February date is typically solidly miserable weather for many people in the Northern Hemisphere. But it’s actually not a great date for the Men’s UCI WorldTour calendar. It’s the final day of the first UCI WorldTour event on the 2022 calendar, the Tour of UAE. That event historically attracts all the top teams and most top riders. And remaining riders are at the other major event that day, the Omloop Het Nieuwsblad. On the women’s side, there are no events currently slated for that day.

But that probably won’t come as much surprise. Ultimately, we all knew that once we got past Tour de France champions being locked in their homes, they were going to race outdoors. Instead, we’re going to see what is basically a new group of racers competing in Cycling Esports. In the same way, we see a mostly different group of people competing at the top-tier in gravel events or mountain biking (or the always most awesome UCI Artistic Cycling – also, did you know there’s a UCI World Championship for Cycle-Ball?).

They all take different skill sets and knowledge, something demonstrated time and time again over the past 18 months as top-tier pros exemplified somewhat rookie Zwift racing mistakes.

Anyway, for those interested, ZwiftInsider has all the details on how qualifications will work for this year. Though it’s worth noting that this event will be held fully remotely again.

However, there are two notable technical pieces that haven’t previously been covered. Both of which I spent a bit of time confirming with Zwift, part of the reason I held back on posting this Monday when the news first broke:

The Trainer: Last year, the event was sponsored by Tacx, and as such, every competitor received a Garmin Tacx NEO 2T for the event (which they would eventually return). Certainly, that’s all fine and dandy from a sponsorship standpoint, but that did one super-important thing: Put everyone on the same level playing field. It’s even more notable because the Tacx NEO 2T is one of only a handful of trainers (really, the only trainer series) that doesn’t permit manual calibration overrides. Some smart bikes have joined that crowd, but in terms of trainers – it’s the only one. As such, it means there’s really no quibbling about accuracy (of which, the NEO 2T ranks in the top tier). The only other trainer that comes close in terms of not permitting calibrations is the newer Wahoo KICKR V5/2020. That does permit the calibration to occur, but then basically wipes it out with its own calibration data within a minute or two. While there seem to be some edge cases that folks have reported in various forums – for the most part, all the data I collect (as recently as this past week), puts the KICKR V5/2020 in the top-tier category.

The point of that super long-winded intro was that the official trainer has not actually been determined (or at least announced) yet. My guess is that it would be either Wahoo or Tacx, with an outside chance of Elite and their Direto XR. That would, of course, be a business decision (how much any of those companies want to pay the UCI for the deal, and then part with what is likely hundreds of trainers). But no matter who it is – the key is frankly that it’s somebody. Everyone has to be on the same trainer, or else there are just too many variables for such a high-profile event.

Dual Recording: The next thing I was curious about was whether or not Zwift would roll out dual recording for the event. Zwift has handed down numerous competitors with significant public sanctions (bans), due to riders not following rules. In all these cases, the rules state that all riders must record their ride from a secondary power meter on a secondary bike computer, and then send that file in afterward for analysis/comparison.

In cases where the rider’s second device failed (such as a battery running out, or if they accidentally paired it to the wrong unit), then the rider was DQ’d. In a handful of cases, riders with failed files then tried to fake the backup file. That faking is what got them in trouble (and again here). Every sanction in the last year is related to the secondary data file (seriously). We can go round and round forever on the precise definition of whether or not this is cheating (since it didn’t affect their actual race position or results). But ultimately, it doesn’t much matter – Zwift’s requirement here shouldn’t be necessary (as a burden on the rider).

Namely, because Zwift is already supporting dual-sensor pairing in their menu. They just refuse to spend the developer hours to simply write that data to a .FIT file. Arguably the most basic of sensor data tasks that can be done in this industry. In fact, Zwift themselves has secondary log files that document much of this (which is what they use in the investigation). Requiring athletes to have not just secondary power meters, but to manage secondary devices and the upload of those is just asking for failure. And failure we see (repeatedly).

Thus sadly, Zwift confirms that they won’t be adding any sort of dual-recording feature into the application prior to the February World Championships. This is a shame, and honestly, something that the UCI should push as a flat-out requirement on trainer apps for next year (or I guess, next-next year). This is literally the equivalent of finishing a race, and then the race organizer saying that you must now hand in your own watch’s files, not to prove the GPS tracks, but to prove that their time matches your time. Imagine if you did that at any other UCI World Championship event? No, of course not. Because it’s silly.

All that said – I look forward to seeing how this year’s championship plays out – both technically and purely from a race/spectator standpoint. Broadcasting these types of events to the world, likely via traditional TV again, will only increase participation in the sport. And whether that’s virtually or otherwise, that’s a good thing.