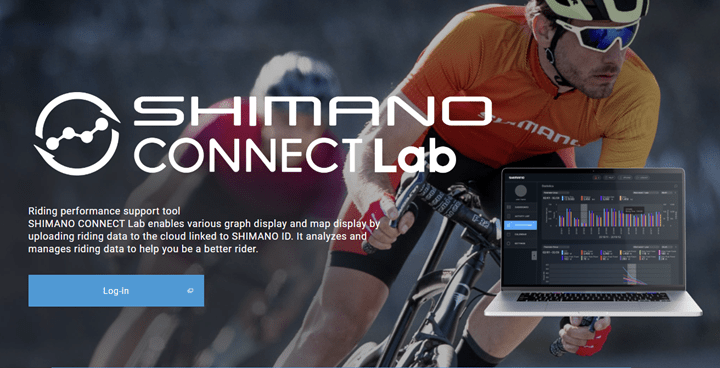 Today Shimano launched their ‘Shimano Connect Lab’ training and analytics platform. This new platform is designed to replace that of the Pioneer Cyclo-Sphere online platform that they disconnected recently. However, it’s also designed to be a training platform for non-Pioneer users too, including accepting Garmin & Wahoo uploads. Shimano says it’s a platform for all Shimano users, though realistically there’s no requirement to have Shimano gear to use it.

While this story is but another chapter in the book that Shimano has been writing following the acquisition of Pioneer’s cycling assets, for this post I’m going to focus on the platform from this moment forward – for any user. However, given it replaced a perfectly functional (if dated looking) platform for Pioneer bike computer users, I’ll also take a look at it through that lens too.

To begin with the platform, you’ll need to be located within one of the supported countries. Instead of listing all the countries supported (it’s a lot of them), it’s probably easier to list the countries not supported. That’s Canada, Australia, New Zealand, and Taiwan. Shimano has recently updated their FAQ to indicate that those users will get access to the platform sometime in 2022. I do therefore find it somewhat ironic that on the homepage for the platform, the single map imagery they choose to use is of…Perth, Australia: 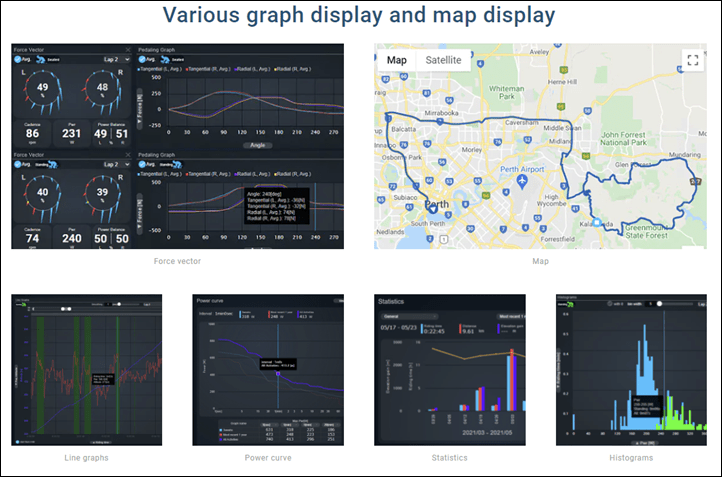 First up is creating your account. You’ve got three options here. Creating a new ID, pulling in your Shimano ID, or transferring your data from Pioneer’s site. In my case, I went with the last, since I do actually have data there from years past. 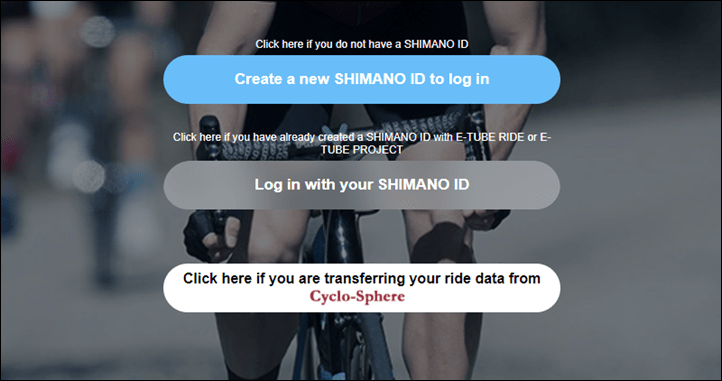 When you click that option, it’ll first login your Cyclo-Sphere account, and then it’ll redirect you to create or login to your Shimano account. So, off I went: 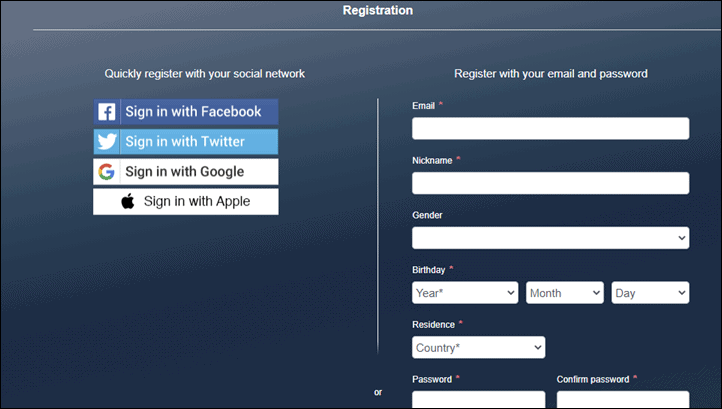 A moment or two later you’ll get an e-mail verification to click on, and then you’ll be signed in a moment later. In my case, since I had connected a Pioneer account, it let me know that’s theoretically complete. 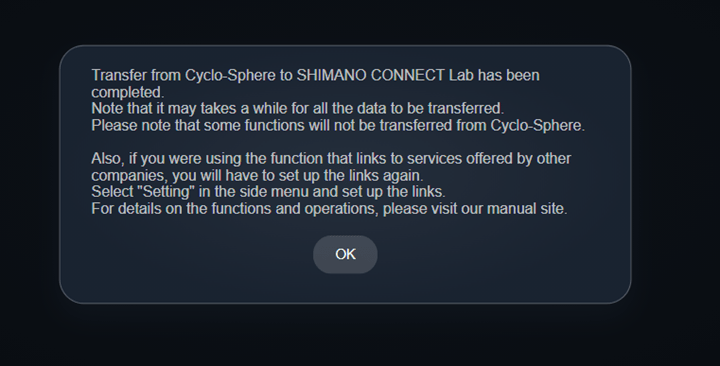 In any case, once that was complete, I was at my dashboard. Which…had nothing. Mostly because the date was for this week, and since nothing could have been uploaded automatically at this point, it’d be empty. So instead I went to the activity list view, to take a look at some old Pioneer data. These were all older rides (much older), but I was curious if the force data would show up. We’ll import a sparkly new Garmin & Wahoo ride in a moment. In any event, here’s a ride:

In case it wasn’t easy to notice on the above image, the map is down below a bit. Each of the ‘chunks’ of data can be moved around the screen, adjusted for size, and gotten rid of altogether:

You can also click ADD up top, to add widgets (or windows) to the screen. So we’ll go ahead and add the Force Vector one, which was for Pioneer power meters: 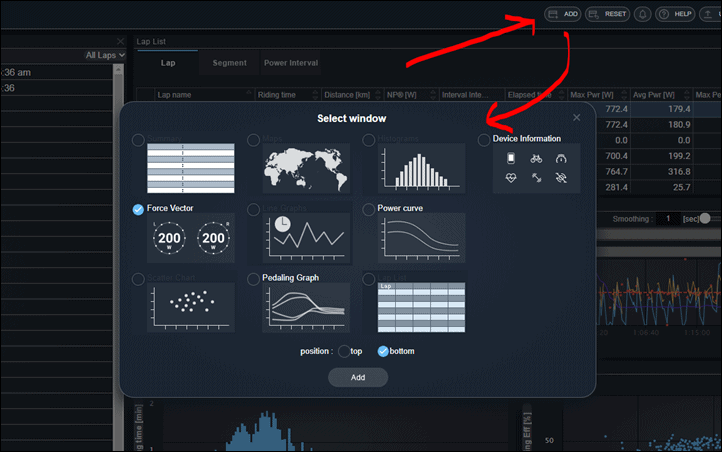 It took a little while to load, but eventually it did pull up. At the top you can change to specific laps, as well as to the total/seated/standing time sections. 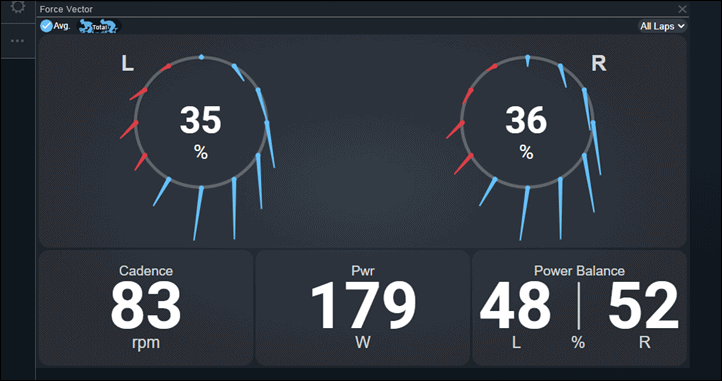 At a high level, much of this looks pretty close to the Pioneer platform. Unfortunately I can’t do an exact side by side comparison, because Shimano killed Pioneer’s site two weeks ago (though, clearly kept access to the data behind the scenes for this migration). However, I noticed I can’t seem to see average pedaling efficiency in the force vector charts, which used to be there. Hardly a huge thing, but someone might want that. It does however show up on the sidebar list of stats, so it is there, just in a different spot.

There’s a bit of a reporting dashboard, under ‘Statistics Power Curve’, where you can theoretically create various reports. But at present, it’s only showing my older data, as (you’ll read in a second), I can’t get my newer data to show up quite yet.

Next, there are a slew of settings there. Some are obvious/common settings, like switching data formats, your birthday, and more. 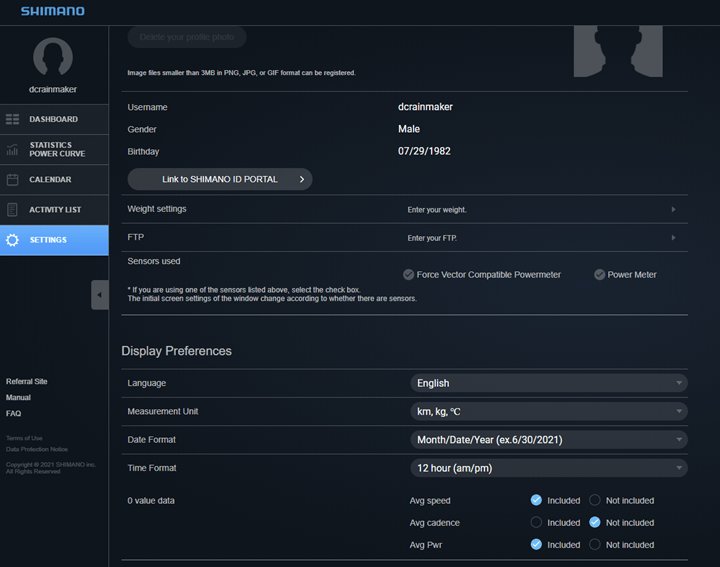 Then there’s some unique ones, such as the ability to set your privacy zones. While that’s on Strava, it’s not something we tend to see on other manufacturer sites. So that’s a nice touch. 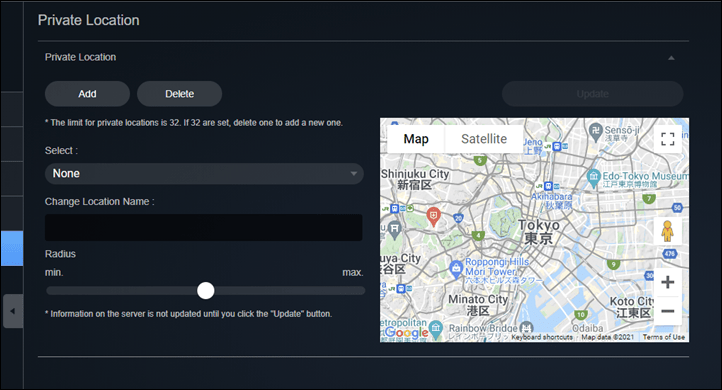 And there is also the ability to transfer outbound, as there was with the Pioneer platform, to Strava/TrainingPeaks/Today’s Plan: 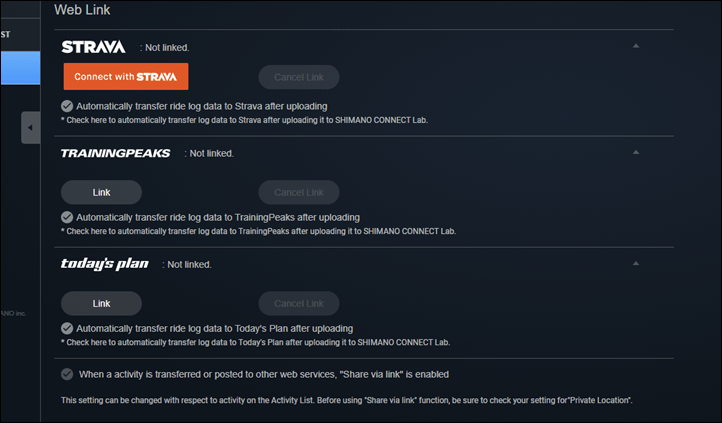 And lastly there’s some significant sorting capabilities within the settings. This is but one chunk of settings dedicated *entirely* to how the sorting of activities appears. Whoever designed these portions was a librarian in a past life. There’s so many options related to sorting here. 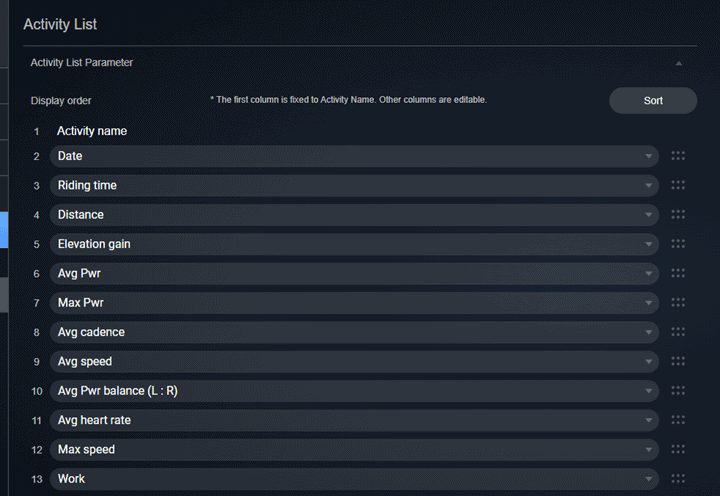 Lastly, it’s worth nothing, that the entire site is as slow as molasses. Shimano warns about this in a few places here and there on their announcements page, so hopefully it’s something that’ll get better over time. My guess for why this site makes snails look fast, is that the user interface is a nightmare to render. It loads each and every block individually, and thus appears to make a single data call for every UI block of data, sequentially. And to be really clear on how long these take to render. I’ve written this entire paragraph, and my page is just finished loading now.

Pulling up a *single* activity of a mere 30KM ride, took a stunning 82 seconds long. And in fact, you’ll notice at the bottom of the page, that it’s constantly contacting cyclo-sphere.com for the data:

And for those geeks in the crowd, if you look at the source of the page, you’ll see it’s littered with Cyclo-Sphere code and reference. Heck, the entire site just pulls from it, with the ‘connect-lab.Shimano.com’ merely being a URL re-write. Said differently, this is just Pioneer’s site, under the cover of Shimano branding/colors. 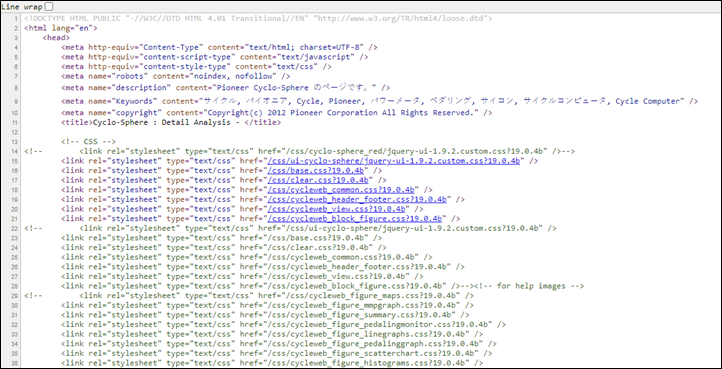 Now as a quick reminder, a few things for ex-Pioneer users. If you have the latest CA600 with the latest firmware, in theory that’ll begin uploading wirelessly to the Shimano site. Since I don’t have one of those, I can’t really test it, so I’ll have to take their word for it.

However, for reasons that are super fuzzy (explanation-wise), those CA500 users can’t do things wirelessly, and instead have to do them via USB cable now. Given we know now quite clearly that the entire Pioneer site is the new Shimano site, there’s far less of an excuse for why CA500 users get degraded functionality. Or, for all Pioneer CA600 users, why you’ve lost the ability to update your maps now?

In any event, at least you can upload to a Pioneer Cyclo0-Sphere look-a-like. Assuming you’re not in Australia anyway.

Now the Shimano launcher site pretty prominently throws around the Garmin & Wahoo logos at every turn. It touts compatibility there. And on a technicality, that’s true. But the reality is more disappointing: You have to revert to 2014 when you manually uploaded files via USB cable. There’s no automatic integration between Garmin/Wahoo and Shimano’s site.

While that’d be trivial these days for Shimano to apply for and implement for Garmin users, I can’t imagine it’d be that much more difficult to get Wahoo onboard as a sync partner.

In any event, assuming you really like manually plugging in your Garmin or Wahoo devices, then let’s talk about how that works. To access that, you’ll tap the ‘Upload’ button at the top:

You’ll then get a file picker to pick single or multiple activities. I selected a collection of two Garmin files, and one Wahoo file. The Wahoo file was an older one I did with a Pioneer power meter a few years back, however, my understanding is that Wahoo never implemented recording of the Pioneer force data (just display of it). While the Garmin files included one with Rally power meter data, and one with Quarq data. 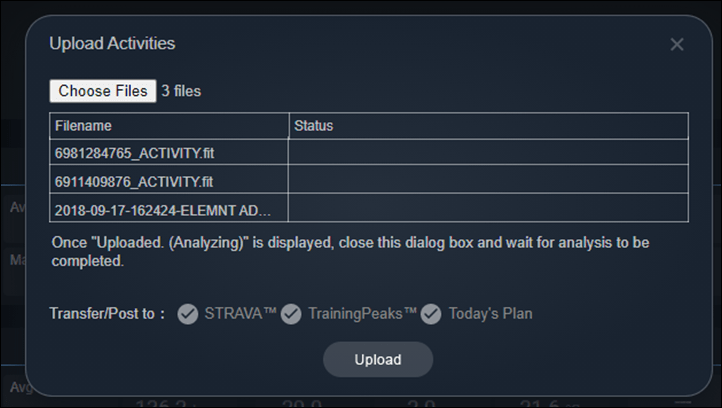 The upload time was slow by normal standards, about 20 seconds for these three files (they’re only 100KB each, a second or so would have been expected). But not horrific. After that, it’ll go into an ‘Analyzing’ mode for some time. About 1-2 hours later. It’s kinda ridiculous. 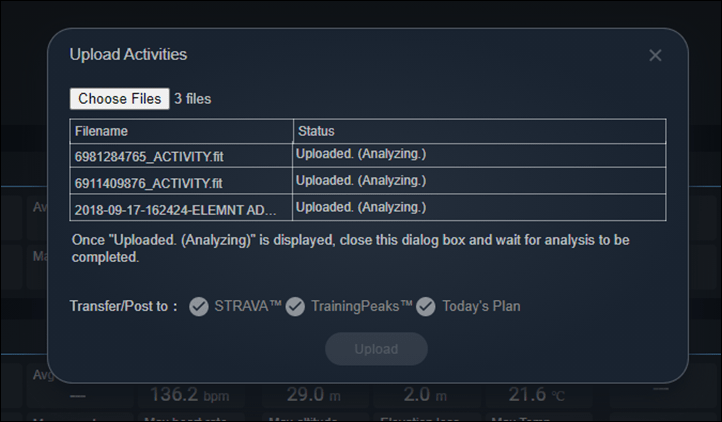 You can click away from this page, and you’ll get a ding-dong message up top when it finishes:

Again, Shimano does at least warn this is gonna take a while:

“The ride data analysis may take time to be completed due to high traffic on SHIMANO CONNECT Lab or other reasons. In this case, please wait for a while and then check the analysis result. We apologize for the inconvenience. Note that you can check the progress of the analysis on the notification header.”

Given this message was posted at the time of the launch, I suspect there’s actually no high traffic at all, but rather, just something horribly inefficient in the design (which, they say “or other reasons”). After all, Shimano didn’t do any meaningful press on the site launch, and thus, virtually nobody is probably visiting this site right now.

Some time and 12 coffees later, it’s….well…still not finished. Actually, it’s been well over 2 hours now. So, I’m gonna have to come back and fill in this section later. Maybe in 20 minutes, another 2 hours, or tomorrow. Whenever it starts working. So, BRB…maybe.

When it came to Shimano building out a new training log site, it stood to reason they’d probably reuse Pioneer assets to do so. After all, they paid for them. Might as well use them. And yes, as of today, you can indeed once again upload Pioneer data from their bike computers, albeit, now with a USB cable for some people. And admittedly, not at all if you live in the wrong country.

But hey, you’ve got a site. And true, it’s kinda horrifically slow and kinda unusable. But again, let’s not let that get in the way of you having a place to upload things – even if it does take half an hour or more to show up. Plus, it does look visually less blocky than the previous Pioneer site. Atop that, you can modify activity sort settings like the inner-librarian you always knew you wanted to be.

And again, you can at least now view your Pioneer force vector metrics. Which, you can’t really do anywhere else. And hey, you can even view Wahoo files, which is a benefit for Wahoo users wanting to see sport data without paying for a platform. Assuming they like USB cables. But who doesn’t like USB cables? Some people clearly do – there’s even a USB cable on Amazon with 20,172 reviews!

I don’t know what the future will hold for the Shimano site. As history has shown us repeatedly over the last decade, Shimano makes *great* hardware, but in general, Shimano heavily struggles with software-related projects. From the transition period to the way the site performs upon launch, this appears to be no exception.

At present, for Garmin & Wahoo users, I don’t see much value in uploading your data to it. Maybe down the road when the site is fast/usable, and there’s automatic upload. But as of now, it’s just too cumbersome to use. And for Garmin users specifically, you’ve already got an entire free site (Garmin Connect) that’s got far more features than this and usually reasonably quick to load.

But again, at least for Pioneer users, you got your site back. Mostly.