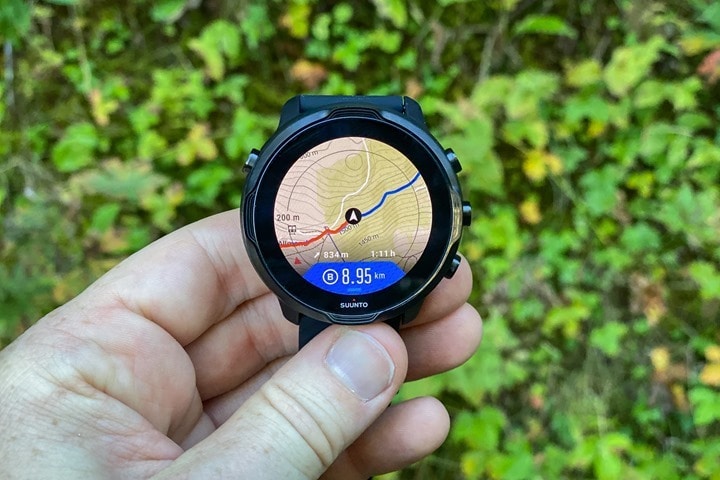 Over the coming days Suunto will roll-out a new update for the Suunto 7 which adds the ability to follow a course/route on the Suunto 7 app. Of course, with the watch being Wear OS based, there were other apps that could do such a feat previously, but that usually meant sacrificing integration within the Suunto app/platform. So this feature moves it in the same direction as all of Suunto’s other watches that have navigation features. The only difference being: The Suunto 7 actually has maps onboard, whereas the other units don’t.

To put this through a legit test, I used it yesterday for a hike/run/something in the mountains. The goal being to see if it’d get me to the top, or throw me off a cliff somewhere. While of course I had another watch or five with me, this was my primary routing unit for this hike.

For fun, I ended up shooting a video along the way. Sorta part Suunto 7 navigation explainer, part Rainmaker’s Random Hike Thoughts. You can hit the play button below.

In any case, let’s get on with it.

Once you’ve got the update installed (which should be pushing out over the coming days), you’ll see a new option to add a route. But before we do that, I created a route. I did this using the Suunto App (and basically, the features I talked about a few weeks back). In my case, I roughly followed the last 18KM or so of the Jungfrau Marathon, except I skipped some of the tamer parts where they were trying to add mileage. So, all in, I ended up around 13.6KM and 1542m of elevation gain (8.5mi/5,059ft).

Once that’s done, I selected to save it to the watch, and a few moments later it was synced over.

So, on the watch, I cracked open the Suunto app, where you’d find a new ‘Select a Route’ option.

Tap that and you’ll see routes you’ve created synced to the watch. This part is super pretty, with a little line showing the route overlaid on the map. Looks really nice. 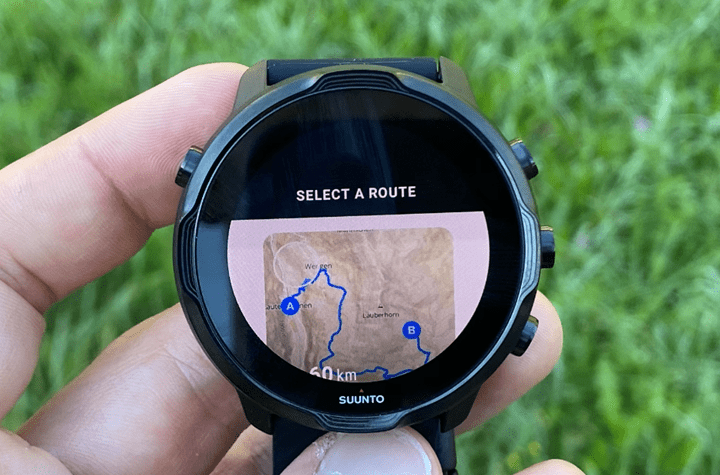 There isn’t any additional information though within that section. For example, you can’t tap to see the elevation profile or zoom in and check parts of the route. It’s a fairly binary thing: Do you want this route or not?

Once you’ve got it selected it’ll show uploaded on your screen: 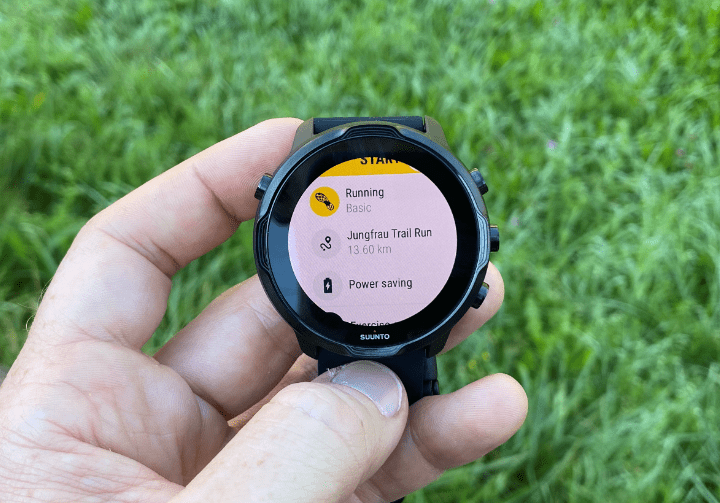 Next, I wanted to do offline maps for this area. Sure, I’d likely have solid cellphone coverage for all of it, but ya never know. So, I began what would be a 4-hour quest to get offline maps for this small area onto my watch. And just like in my review earlier this year, it’s still a mess. I had two different WiFi networks (including my own hotspot), I tried restarting phones, connecting to multiple WiFi networks, deleting WiFi networks, plugging in, unplugging, letting it sit for hours…no luck. Eventually, I just gave up and figured the maps would render via cellular/Bluetooth coverage. 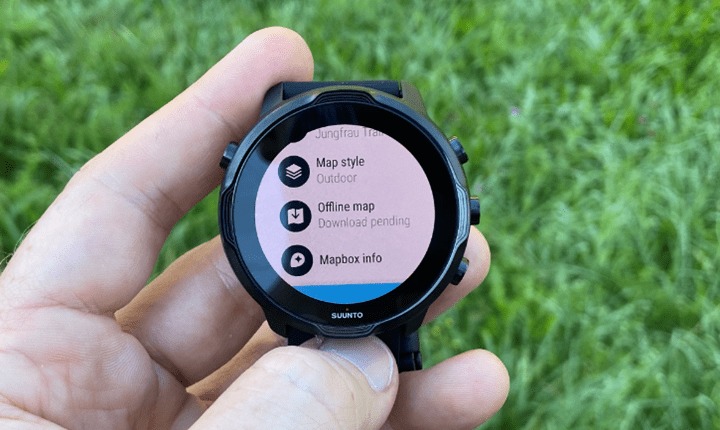 In any case, with all that set as set will be, I meandered out to my starting location and ensured I had good GPS and HR lock. And then ensured I had the route still loaded. Also, I left on the most accurate GPS option, and then kept the display settings at their default of not always having the map always-on (meaning, “Always-on map” setting was toggled off). The new always-on map display option is something Suunto is rolling out with this release to save battery if you want maps enabled, but in my case I went with the more battery-friendly option of just letting the map display turn off after a few seconds.

And then, I began.

You’ll see the route in blue, and my progress in red. In this case I hiked a few hundred meters before taking the photo. At the bottom you see distance remaining, while in tiny little text above it you see pain…err…ascent, remaining. 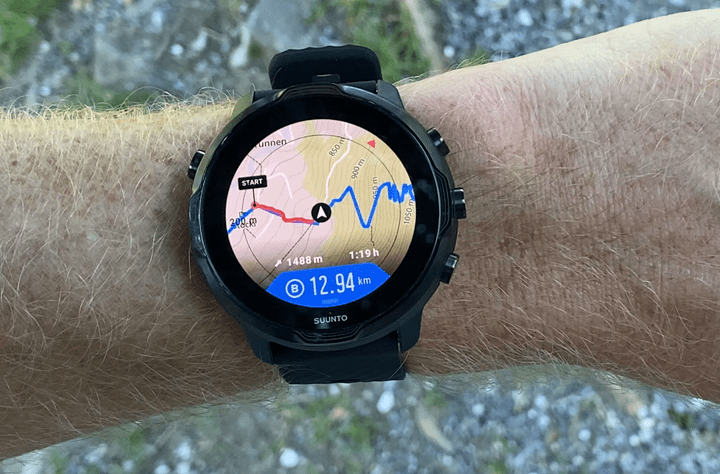 And stepping back for a second, you’ll see there is the option to zoom in/out, and then within that you can swipe around too. 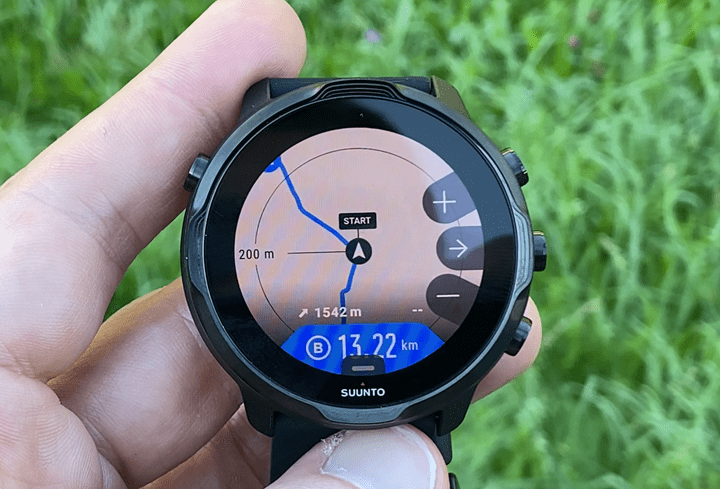 Also notable is you’ll see a small red heading bug (the red arrow on the inside of the bezel), indicating the direction to North. Given this does have a magnetic compass, it properly showed the correct direction even as I rotated the watch in place. 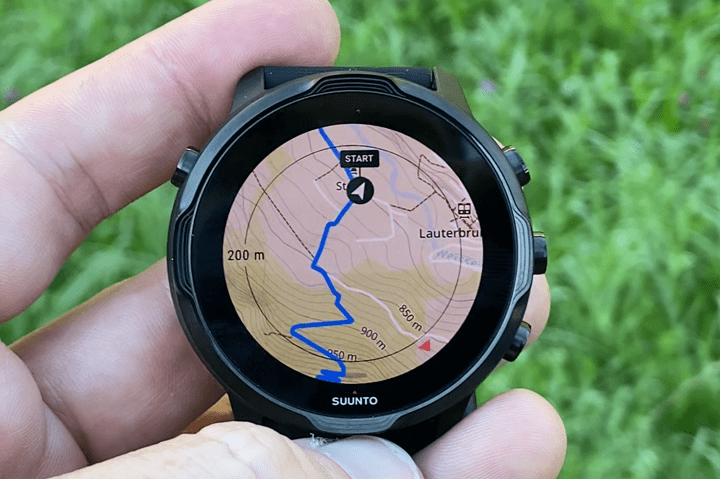 If we skip ahead a few kilometers later, you’ll see my distance has reduced, and my time target remains highly optimistic. I’d also argue having an elevation profile of the route would be hugely beneficial. On my Fenix 6 I had ClimbPro enabled, and being able to see each of the four major climbs and how much distance/ascent I had remaining for each is by far one of my favorite features. 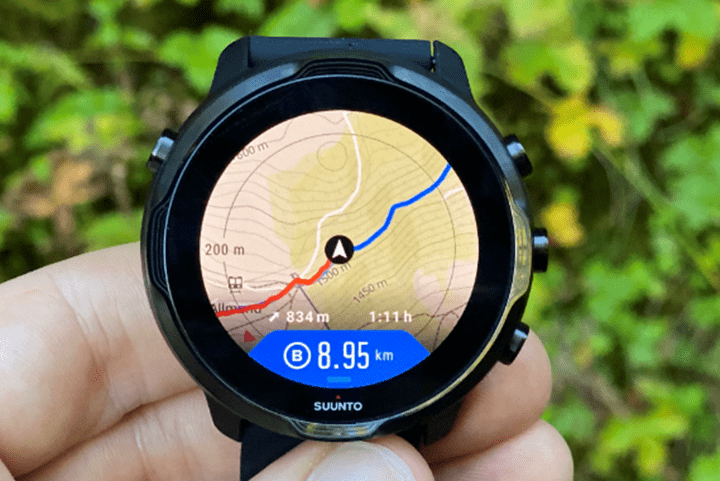 But, the Suunto map itself was super easy to follow, and the display had no issues on the bright sunny day it was – whether I was in the woods or the sun. 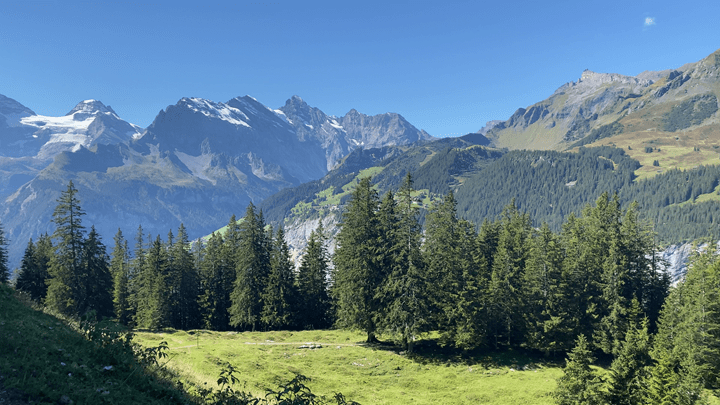 Now, I did stumble on one problem repeatedly – which is that it wasn’t giving me any off-course alerts. Ever. I went off-course numerous times, ranging from 40 meters (as shown below), to well over 100 meters. In all but one of those cases it was on purpose, whereas the others weren’t exactly planned.

Instead, it showed that I was off-course on the display, but didn’t actually alert me to that fact. You can see below that the screen shows I’m 42m off-course (so the ascent remaining gets swapped to off-course distance). I’m not terribly certain what the 0:23h is trying to tell me. 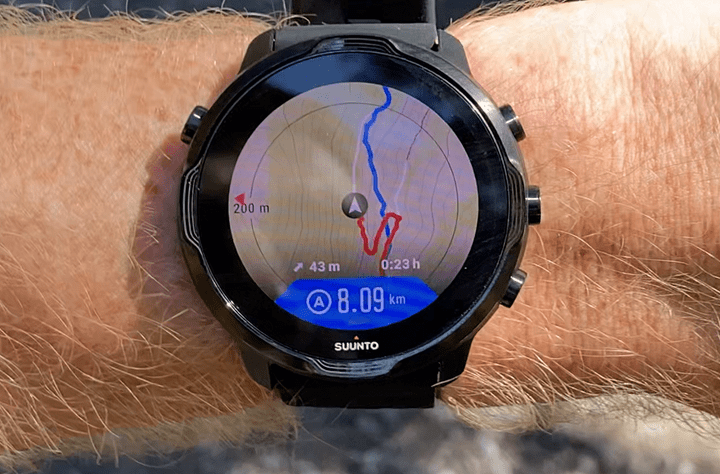 Once I got back on the course it then resumed the normal ascent remaining metric. If you look at the video you can see an example of easily 100m off-course, which while in this instance on the video it was easy to backtrack on the gravel road.

After the hike I hit up the folks at Suunto and they said that it definitely should have alerted me, and that they haven’t had any reports of this from beta users yet. I attempted to try this again, but at present the Suunto app isn’t allowing me to create any courses – my guess is there’s a backend server hiccup right now. I’ll take their word for it for now that it should work for you.

In any event, there isn’t much more to show here. So instead, here’s a picture of a cow or ten. It’s where I got sidetracked. 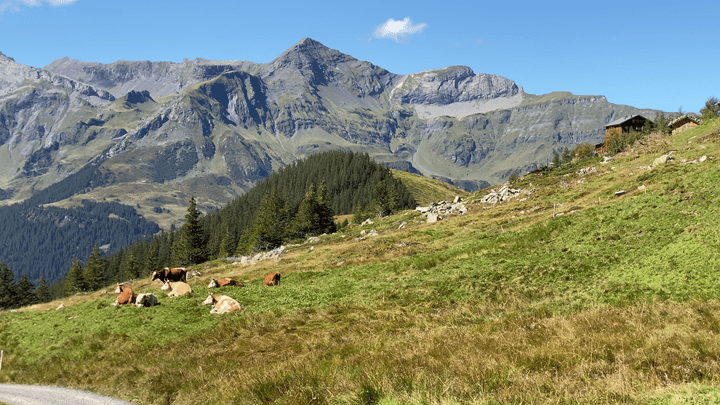 And then here’s a picture near the top on a rather steep ascent. Of course, it doesn’t look like it in the photo. Nor can you really appreciate the drops on both sides. Also – as I’d learn later that night going down, this is apparently a mountain bike trail. One that would seem like a poor life choice. 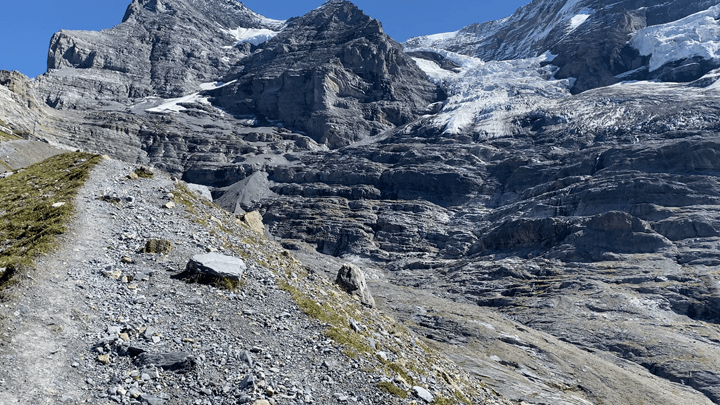 While I reached the top without any real issues, my route actually took me back down slightly to the tram station. But first, I went on another detour to take a photo or 90. 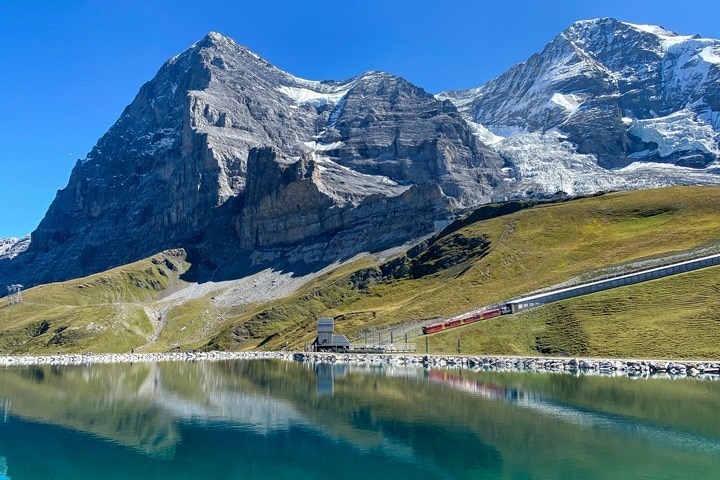 Then, it was down to the station to end my route. This is what it showed on the watch as I hit the finish area. 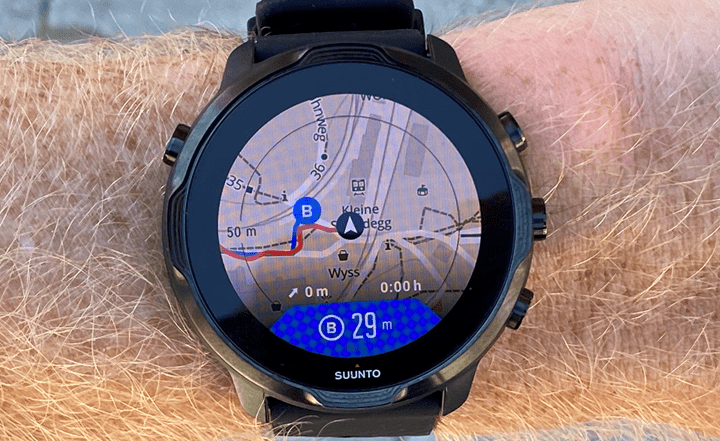 Afterwards, I saved the activity just like normal and uploaded it like normal. You can see the Suunto 7 activity on Strava here (as well as a few other pretty photos).

For those curious on battery life –I started the route with roughly 88% battery, and I ended it about 3.5hrs later (including my photo stops) at about 12%. So, my bet is that it wouldn’t have lasted till 4 hours, should I have needed it. But, once back in standby mode (non-GPS) the watch did last another 5 or so hours I believe (roughly till sometime around dinner). 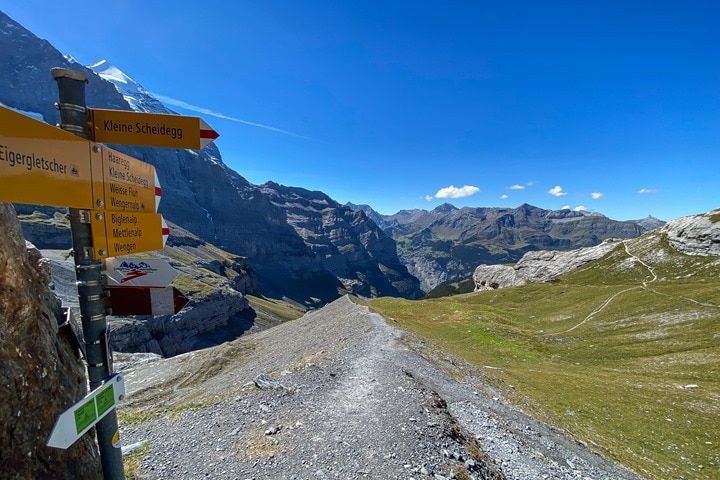 Ultimately – the functionality as implemented worked well, aside from the lack of notifications. It’s a good step forward for Suunto, and having the underlying maps there makes it look pretty nice. You can see above that there is additional data in the maps (such as the train station), though you can’t route to any of that. Meaning, you can’t look up streets/points of interest/etc… Think of it like a map under a piece of glass – it’s there to look at, but not interact with.

As I said earlier this year with my Suunto 7 review, Suunto has a ton of potential here. And most of my issues had nothing to do with Wear OS as an underlying platform – in fact, I think that’s its biggest strength. The current implementation of routing is workable for realistically most of the day-trippers on that mountain that day. They’d create a quick route from the app (and in this location, Suunto excelled at creating great routes using the new app functionality), they’d then go off and hike for a few hours and come back and have a beer. Not terribly unlike what I did, minus the beer.

The scenario where it would have struggled though would be my ride I did later that afternoon. Not because it was already dead on battery, but because I was mostly in ad-hoc routing mode – meaning I didn’t have a clear plan ahead of time, but rather was trying to route village to village looking at bike trails, elevation, etc… I wouldn’t have been able to mid-ride/run tell it to simply route me somewhere random, that has to be done via the app with a pre-defined course.

Still, I get that’s likely in a different realm than what Suunto is trying to accomplish here. Clearly, with the battery limitations, the target for this iteration is the aforementioned hike & beer crowd (a fine crowd, mind you). It’s simply not going to be the Jungfrau/UTMB marathon crowd. And that’s completely OK, Suunto has other watches that fit that bill (namely their Suunto 5/9 series).

Hopefully though this is Suunto setting the stage and priming Wear OS with features so that once the underlying Wear OS battery aspects can be solved with newer hardware, then Suunto can have something that might appeal to people looking to go 8-10hrs at a time.

At the end of the day, I’m an athlete just like you looking for the most detail possible on a new purchase. These posts generally take a lot of time to put together, so if you're shopping for the Suunto 7 Wear OS Watch or any other accessory items, please consider using the affiliate links below! As an Amazon Associate I earn from qualifying purchases. It doesn’t cost you anything extra, but your purchases help support this website a lot. Even more, if you use Backcountry.com or Competitive Cyclist with coupon code DCRAINMAKER, first time users save 15% on applicable products! 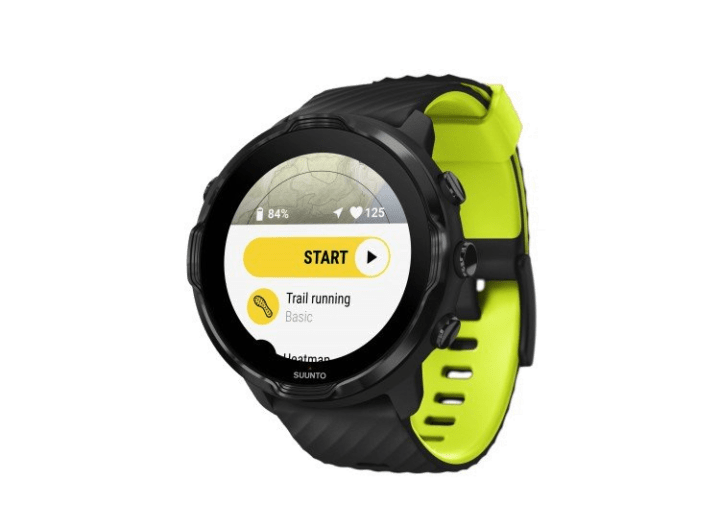