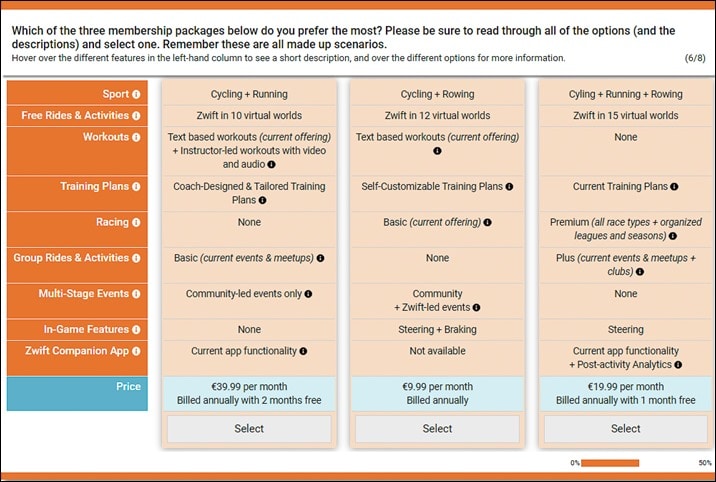 Zwift has sent out a survey to numerous members (including myself) that indicates they’re pondering multiple membership tiers, steering + braking, hosted audio-video workouts, premium racing leagues, and many more features. While the survey is of course meant to gather feedback to guide Zwift’s next steps, it ultimately gives a surprisingly wide-ranging view of some of the things Zwift is working on (or at least, considering).  And, in this case, it seemed to have also lit a fire of ire for many people that received it, as seen on Reddit, Zwift Riders, and other places.

First, and foremost – despite some speculation to the contrary (including from the CEO of Zwift itself on Twitter, since deleted), the survey is indeed legit and from Zwift. Zwift’s head of communications, Chris Snook, confirmed this later in the day, saying that “the survey is intended to help us understand the value of individual product features…”.

But more on all those features in just a moment. First, let’s dive into the piece that undoubtedly caused the most outrage – the payment tiers.

Oh, also, it appears to let the cat out of the bag on not just one or two features, but an entire slate of things being planned. Which, come to think of it, seems to be a pattern of Zwift surveys lately. So in the future, if competitors wanna know what Zwift is planning – simply look at the survey they sent ya.

Now, at first glance (and 2nd, 3rd, and 8th glances), the survey outlines numerous scenarios where you basically pay more than you do today for features that you may or may not use. In particular, it presents 8 different scenarios to evaluate, each with three options. In all the scenarios there are features shown that have not previously been announced (such as instructor led workouts with video, or real coaches writing tailored training plans for your season with feedback on your workouts).

At the start of the survey they note the following, with my additive red box around an important bit of text: 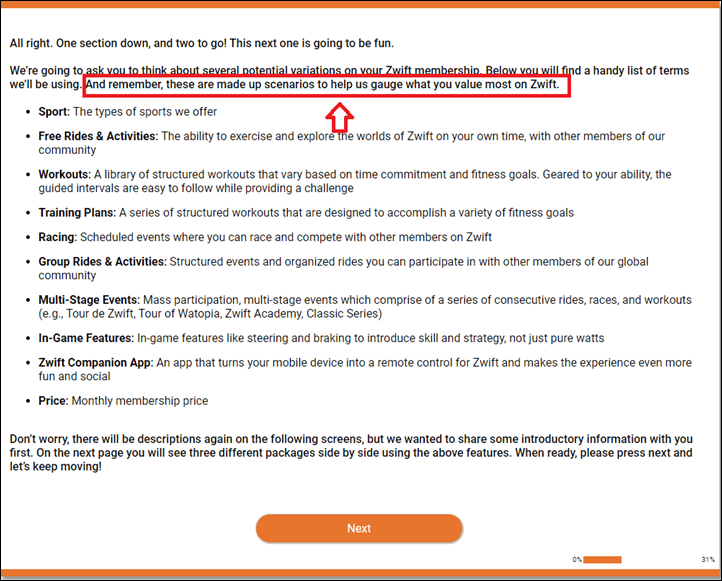 On every subsequent page with options, they repeat the same “these are made up scenarios” wording. But, if there’s anything we as consumers know from years upon years of corporate communications: There’s no such thing as made up scenarios. At least not in the general sense. There’s a reason why Zwift is asking things, else, they wouldn’t be asking them.

Here’s the first of eight different pricing scenarios that came up. We’ll ignore the fact that the first option spells ‘Cycling’ incorrectly. In my case, due to being European based, the options are presented in Euros. For others, they’re presented as USD, GBP, and perhaps other currencies. The highest price I’ve seen for a plan was $44.99/month USD, and 39.99EUR/month (~$46USD). 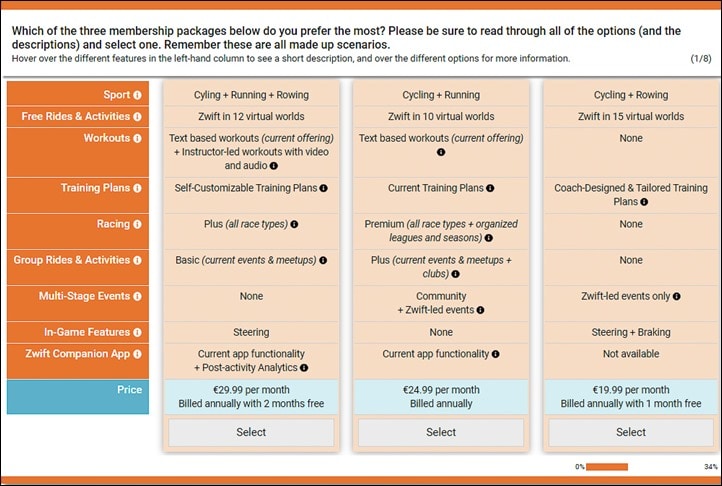 You can hover over various little ‘info’ icons to get additional information on some of the proposed features. For example, this one for the ‘Group Rides & Activities’ line item, specifically the “Plus” option:

You’ll also note that all of the slides present a rowing option, something that Zwift has repeatedly hinted at, but not actually yet released.

And here’s another with racing bits for the ‘Premium’ option:

Now, we’ll circle back to my collection of ‘unseen features’ in a second. But for now, let’s keep talking about the pricing model. Essentially what you see ranges in price from 9EUR up to 39EUR, some billed annually, some not. Some with ‘1 or 2 months’ free. Some not. The combination of using billed annually and free months is confusing AF to my brain. Just write out the effective monthly price, please.

In any case, you’re required to select a package, even if they all suck. So, I did. 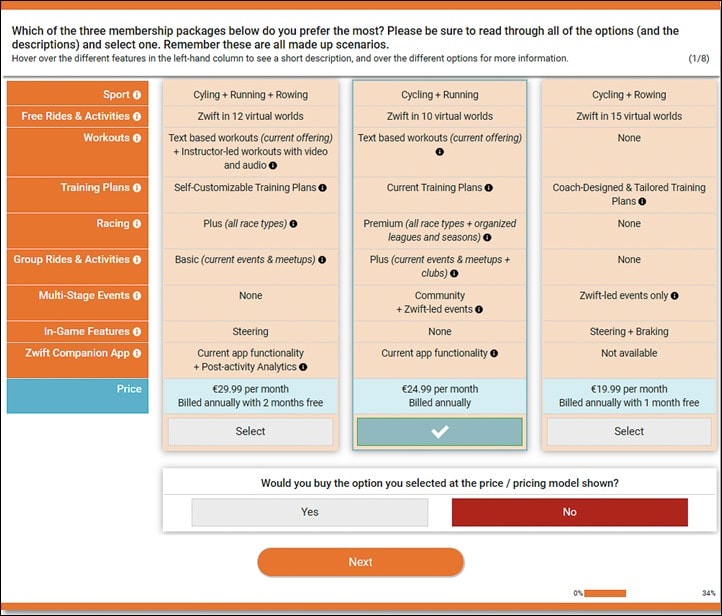 So in this case, I decided that I’d prefer multi-stage events over steering. I guess? Realistically, almost all eight of the different scenarios I got were horrible. A trend that almost everyone echoed online.

After which, you’re asked whether or not you’d buy that option. And every time I selected no.

Another, like this one, leaves you just puzzled. I have to choose between cycling at $9/month with steering/braking, but at $29/month I don’t get that feature? 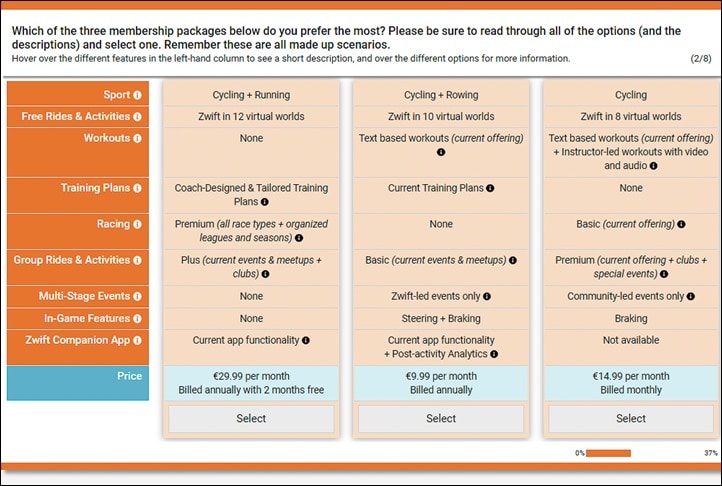 About now, you’re probably asking yourself: What horrifically inept management consulting firm put together these scenarios?

And the answer, according to Zwift: A computer.

In discussing the lack of coherence with Zwift, the company said: “It’s important to note that the methodology requires randomness. These packages are not crafted by a human to make a nice coherent package of features. But the randomness and the large sample set should help us make sense of what people value.”

And while it’s true that computers can do fantastically impressive things with poor data sets, it’s also true that frustrating your user base is hardly the best way to go about gathering that information. After all, at no point during the survey did it ever ask you *WHY* you didn’t select that option. Or even ask you to rank these new features in order of importance (which would have gotten the information they were after in a much more direct manner).

This type of methodology is called a conjoint analysis, and has been used for years. This means that the options are entirely random within them. You can then take algorithms to (in theory) figure out the differing price points people might pay for various features. Assuming people didn’t just give-up due to the stupidity of the computer-created options.

Now, despite these scenarios being made up – here’s a simple gallery of all eight options I was presented with. It sounds like everyone is getting different options – so these again, will vary.

Again, we’ll get back to the new features in a second, but what was the intent behind the survey? Ask, and you shall receive.

Zwift said later, “The survey is intended to help us understand the value of individual product features – do people value mass participation events over racing for example. The pricing structures and tiers are irrelevant, but the methodology behind putting features at random behind different paywalls helps give us a better understanding of each product function.”

Certainly, Zwift wouldn’t be the first software platform to offer various pay levels. In fact, there’s many good reasons Zwift should consider that. After all, if they’re adding in features that include a real human coach that evaluates your race calendar, and comments daily on how well you executed your workout – that should cost more. Setting aside the scalability or potential quality of that, I think most reasonable people would agree that’s a substantially increased feature for those that want it. And thus, paying more makes sense.

Same goes for potentially expanding into areas currently occupied by TrainingPeaks, or Today’s Plan, or whomever. All things hinted at, and all things you may pay another service for today.

However, Zwift has to balance significant new premium features against undercutting the core of their subscription base. Or, against upsetting their most ardent supporters in the Zwift community, who widely took this survey as a massive slight against them.

Now, whether or not Zwift raises prices, adds tiers, or does any of this remains to be seen. It doesn’t take a fancy survey company though to realize some of it will be done. They wouldn’t be considering this many options to not do any. Plus, as pointed out by numerous individuals, with CEO Eric Min hinting at an IPO, having higher tier pricing to increase cash flow projections for potential investors.

Finally, note that while Zwift says the pricing structures in the survey are irrelevant, the reality is that some human put a cap in that survey structure for pricing. So to presume they aren’t considering a $40/month tier (the same as Peloton), would be fanciful. Of course they are, otherwise they would have put the cap at $30/month (or $60/month). Whether or not they settle on such a tier is the real question.

All The New Features: 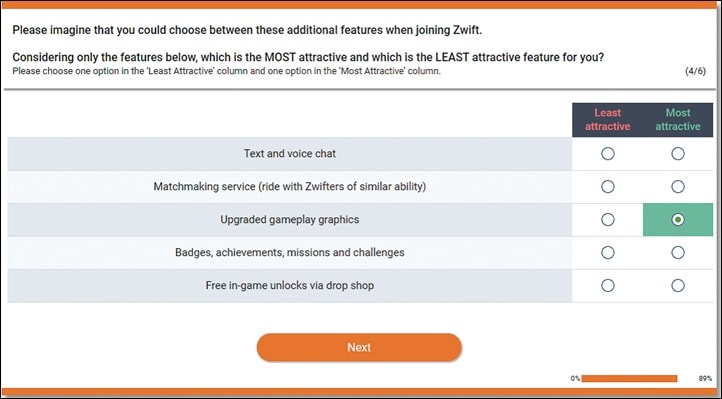 But, let’s ignore the computer randomizations for a moment, and instead focus on the concrete: Numerous new feature ideas Zwift has floated.

Again, some of these are undoubtedly just ideas. Things that may or may not come true. Others are things Zwift has confirmed or talked about repeatedly (for example, rowing and steering). But, they’re all things that weren’t created by a computer.

No, these were things that a human put together as plausible features, likely backed by internal roadmap summits, in-person meetings, conference calls, and all assortment of thinking and analyzing. That’s the way companies work, and Zwift is no different there. So, if you skim through all the survey options, they consolidate into the following list of “new features”, all of the descriptions are exact quotes from the info tabs (except rowing):

Rowing: This is the easiest one, given it’s at the top of every page. And also one that Zwift has repeatedly discussed as being near-term.

Coach-designed & Tailored Training Plans: A coach will write you a tailored training plan, check in to assess your progress and revise the plan when necessary

Plus Racing: Includes all race types, as well as organized leagues and seasons to create ways for groups of people to compete and accomplish a common goal

Plus Group Rides: Adds Club functionality to let the community form their own groups, create their own events, and generally build smaller, more intimate communities.

Steering and Braking: In-game features like steering and braking to introduce skill and strategy, not just pure watts

Up to 15 Virtual Worlds: This wasn’t a separate item per se, but listed at the top of every survey option. Any reasonable person would expect Zwift to continue expanding worlds, so this isn’t a huge surprise.

Now, the above new features were all of those that were featured within the pricing models section. However, there was also a secondary section of the survey, where Zwift asked extensively about how you ranked their various pro level events (primarily from a watching them standpoint): 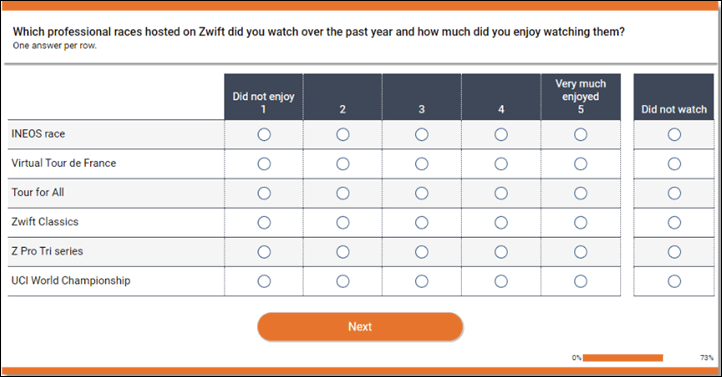 This also included asking whether or not you found any value here:

However, that then segued into six different combinations of how you would compare various features: 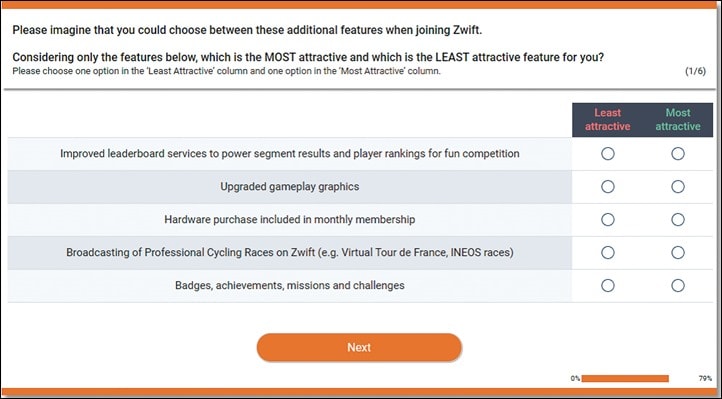 Here’s the full set of six pages of options I received:

As with before, there were times where I was like “I don’t really care about any of these”, so a least-to-first ranking would seem to be more valuable than forcing me to choose between multiple blah things as ‘Most Attractive’.

In any event, within these there were yet more features outed. They included:

Now, not all of the above are huge leaps. For example, Zwift already does some hardware bundling with their online store in a limited fashion. And with the recent in-housing of Zwift Power, the leaderboard pieces aren’t a big jump. And while Zwift lacks voice chat today, they do have text chat.

Still, in total, the survey is a stunning display of Zwift’s roadmap of things being considered. Undoubtedly there are others not listed here being tossed around, but still – this gives competitors a massive list for which to consider bringing forward prior to Zwift doing so. While few of these features are groundbreaking by themselves, like any major software platform – it’s more about the total integration than any single feature.

Ultimately, while it’s easy to dismiss the higher-priced tiers as a money grab, the reality is that if the company can offer more features that people find valuable at a higher price – then I don’t have an issue with that. For things like racing leagues, added coaching components, etc… there’s undoubtedly space in people’s wallets to re-allocate funds. After all, people aren’t spending on races in 2020 (or travel to races), nor are they likely to spend 2019 type race amounts in 2021 either.

Thus, it makes sense for Zwift to strike while the iron is hot. The key is ensuring they don’t burn anyone with the iron in the meantime.