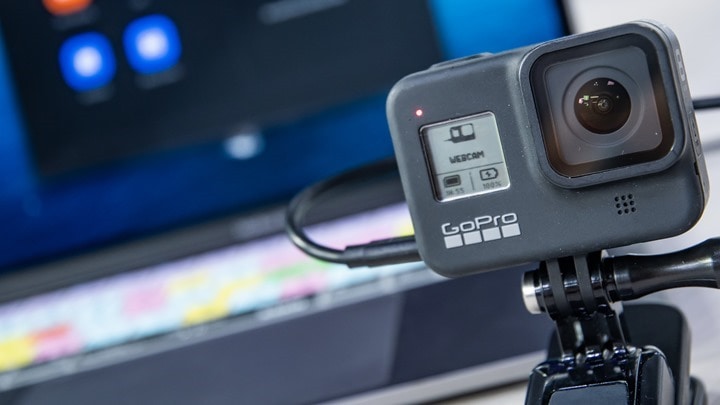 Today GoPro has launched a beta feature for the Hero 8 Black that allows you to use it as a tethered USB webcam for apps like Zoom, Teams, Twitch, and basically any other app that can use a USB webcam (which, is basically any video conferencing app). So, if you wanted to livestream/Zoom your next Zwift session or such with friends and get the full bike in there – this is much easier.

Up until now, the GoPro hasn’t actually been capable of enumerating as a USB webcam. The only way you could get video from a GoPro to a computer live was via HDMI cable, but that’s only if you’re computer had an HDMI capture card (which, it almost certainly didn’t). And even then, up to the Hero 7 that was limited to 720p, and with the Hero 8 that port required you also buy a GoPro Media Mod.

Now, you could with a smartphone stream a GoPro live to the interwebs for apps like Facebook Live or YouTube, but not for usage within apps like Zoom or other conference apps.  In short, the solution was wasn’t ideal for today’s global situation (nor really, ideal for any point in the last decade when people just wanted it as a darn webcam).

Fear not, today changes that. You can now get that wide-angle shot you always needed to ensure you most definitely accidentally capture your roommate/partner/child in the far corner of your room doing something unsaid, on your next work conference call.

Simply press the play button below for the complete run-through!

The Quick and Dirty:

To begin, you’ll need a few things to get started:

Yes, I said a Mac. As of today, the Windows beta app isn’t out yet. GoPro says it’s in development and coming shortly, which is probably why this is marked as Beta, and not as ‘Donezo’.

First, you’ll need to upgrade your GoPro. To do that, go to this page and download the Beta firmware. You’ll unzip the UPDATE folder and place it on micro-SD card (at the top level). So, when all is said and done, you’ll see the UPDATE folder sitting at the same level as the DCIM folder, like this: 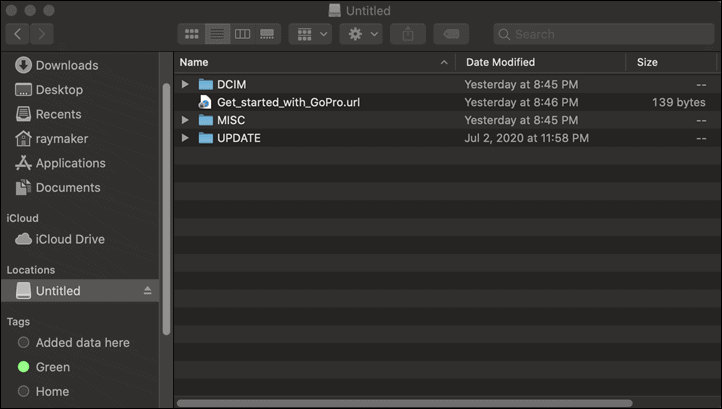 Next, put the microSD card back in the GoPro and turn it on. It’ll take about 60 seconds and show you an updater icon on the back, indicating that it’s updating the firmware: 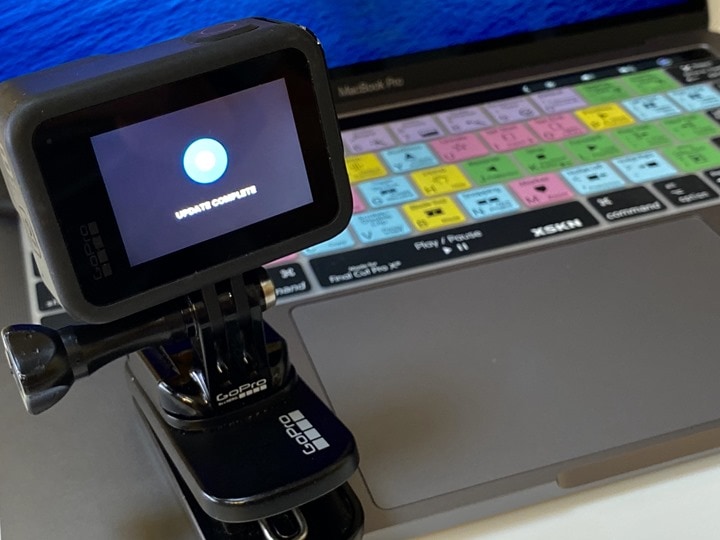 Ok, with that done, go ahead and download the GoPro Webcam app here. Again, only available for Mac today, soon for PC. It takes just a second to install: 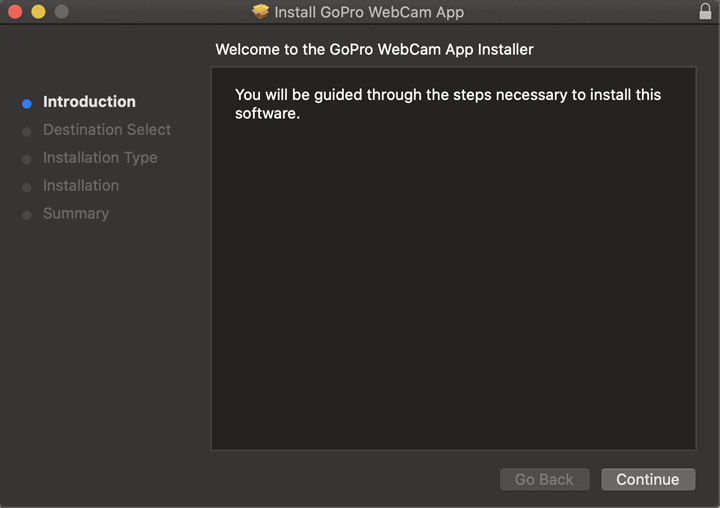 Finally, with all that jazz done, then turn on your GoPro and connect it to your computer. You should then see the GoPro Webcam app show the camera is connected, with a ‘Show Preview’ option.

And on the back of your GoPro you’ll see that it’s in what is best defined as a ‘Look but don’t touch’ mode. Literally, you can’t do anything to it, it’s all locked down. You can just see the preview of yourself and the new webcam icon. There’s no changing of settings, no turning it to portrait mode, and no pressing of buttons. It’s totally toddler proof. 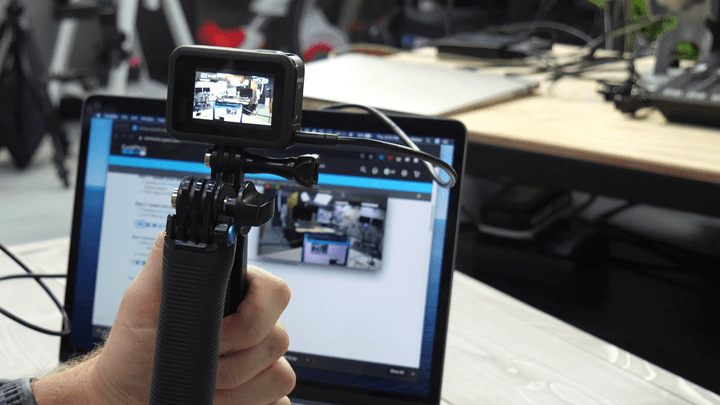 (Wait, what’s that awesome GoPro door that allows you to keep the GoPro plugged in? It’s here (or EU here). I did an entire video on it here.)

Now, in webcam mode the GoPro’s resolution is 1080p (or you can select 720p), at 30FPS. It’s also in the ‘Wide setting’. GoPro says they’re working on other ‘Digital Lens’ options, which is GoPro speak for letting you change it to Linear (non-fisheye look) or perhaps Superview (ultra wide). They also said “future goals include providing options to support more digital lens options and higher resolutions”, specifically 4K being one of those goals, when I asked.

Update! There’s an Easter Egg option (secret option) to access the additional digital lenses. When you click on the GoPro icon in the upper corner, hold down the OPTION key (and keep holding it). Then you’ll get a new menu option titled ‘Effects’. 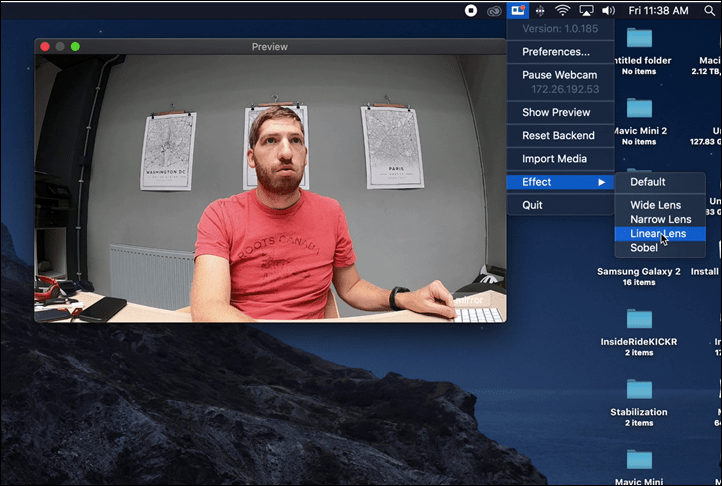 Here’s the three lenses side by side: 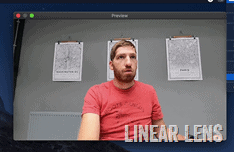 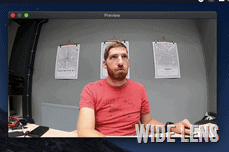 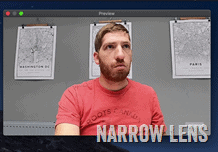 And then there’s the ‘Sobel’ effect, which…ummm..yeah: 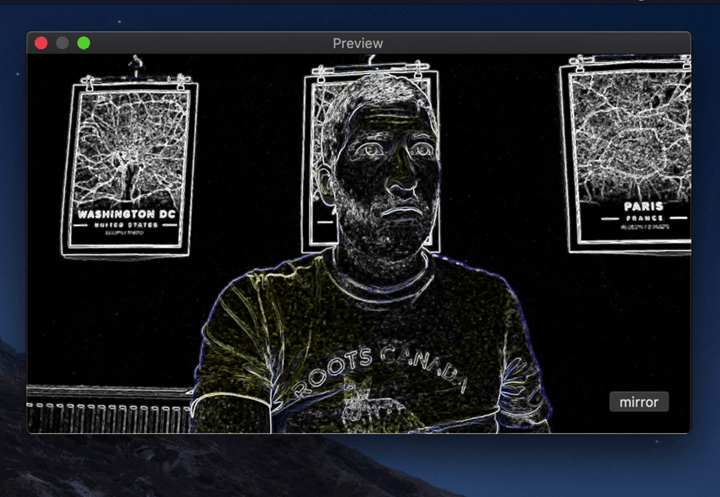 Oh, and there’s the preferences option for toggling between 1080p and 720p: 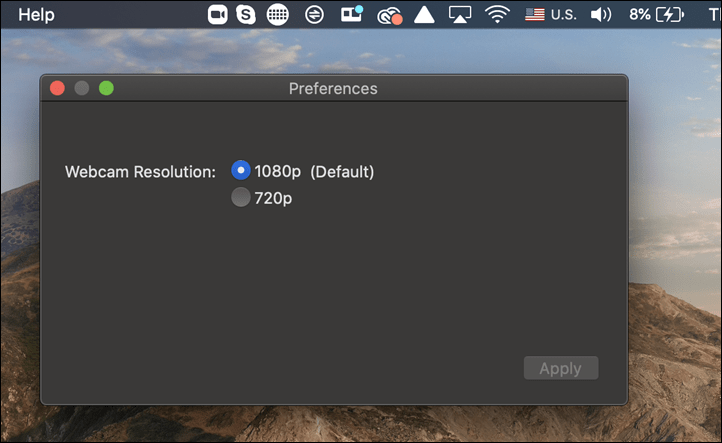 You can also flip the image – useful if there’s writing or such on the wall behind you. You can see here the difference in tapping the flip button: 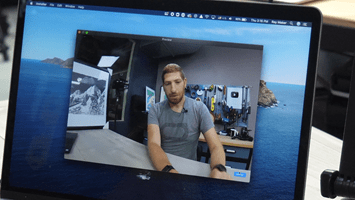 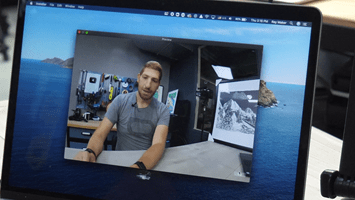 Also, note that the red light will blink the entire time the GoPro is connected and being utilized by the GoPro Webcam app. Just as a reminder that it could be leveraged by other apps: 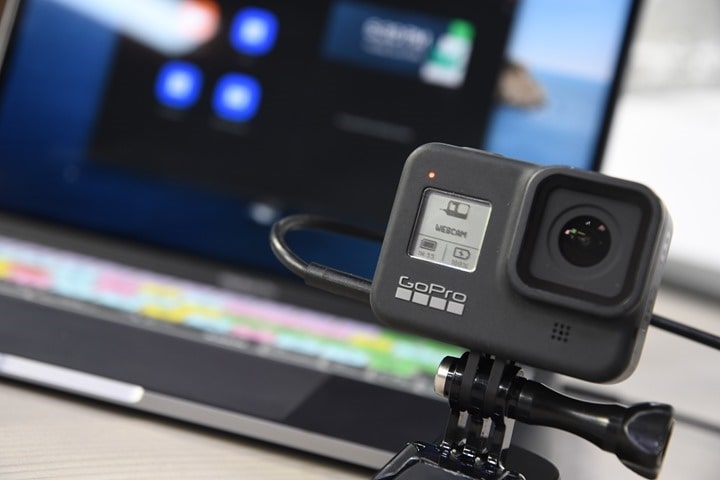 You’ll now see the GoPro as a webcam you can choose from the list. This will capture video, but not audio. I suspect for most people you’ll want to still use your headphones or whatever for audio. In fact, I did an hour conference call today with it in Microsoft Teams, and the folks on the other end said it looked ‘Good’. 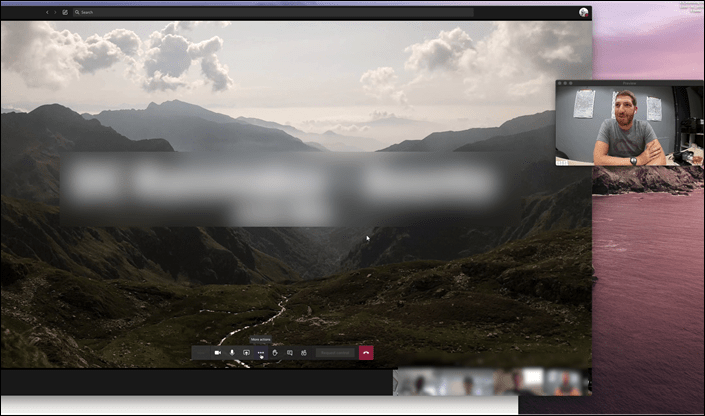 And it works in Zoom: 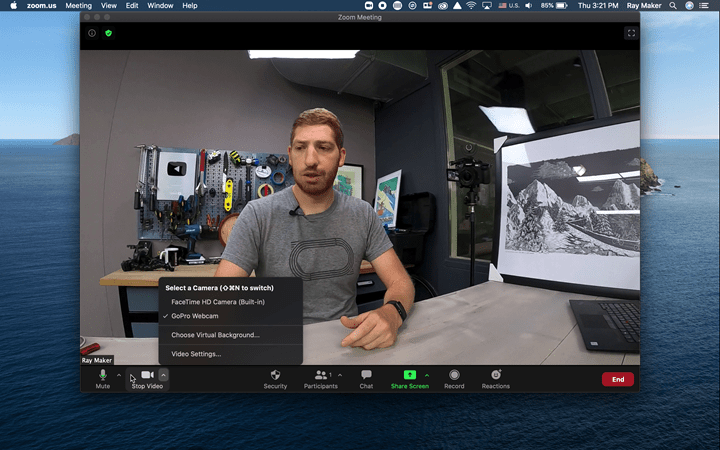 And it works in Skype: 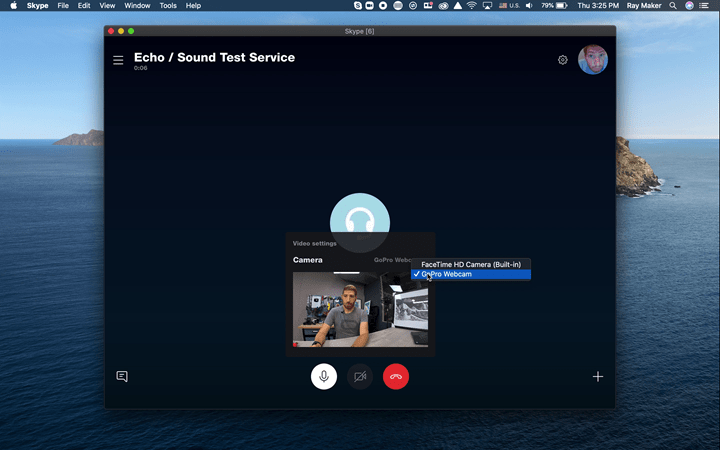 And it works in OBS: 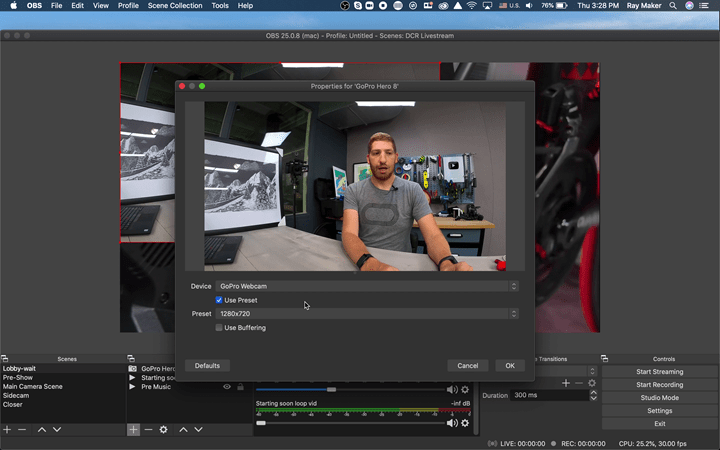 And even Quicktime to straight-up capture video: 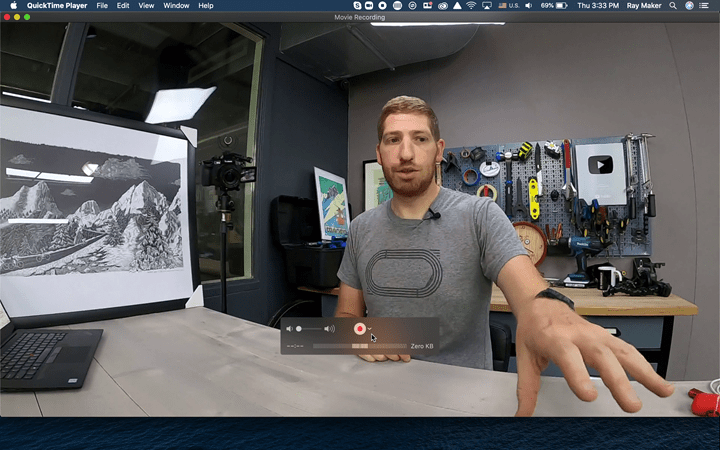 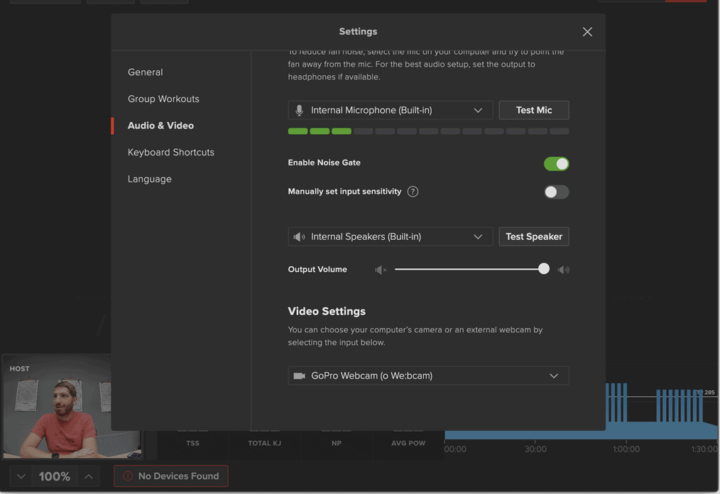 Frankly, it’ll work in basically every app – because it’s just a standard Webcam. The same technology that’s been around since the days of AOL or something. Standards are cool, huh? 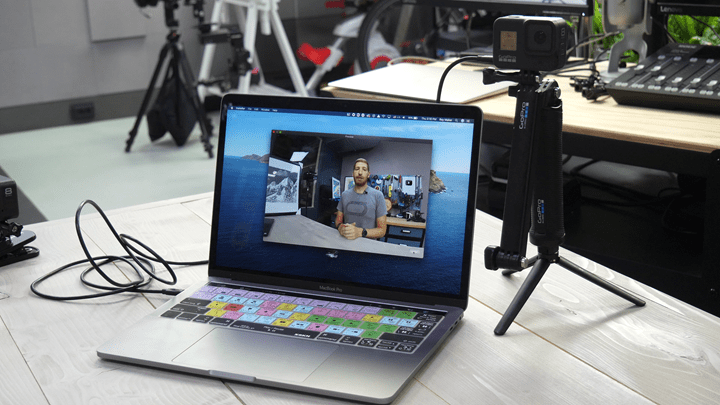 Of course, COVID-19 has been hard on almost every company (unless you make masks, or have an indoor trainer app). But for GoPro, it’s meant that not only are people not buying GoPro’s, but they’re also likely not even using the ones they have. And certainly almost nobody is thinking about getting one.

Still, in these sorts of firmware updates that get people back into using the camera if they can’t otherwise. And in turn, might get them thinking about GoPro for the eventual point in time where they might consider going out and buying an action cam.

Meanwhile, for streamers, this is an awesome option – especially for wider angle establishing type shots. This skips having to buy an expensive camera, then an HDMI capture solution, then dealing with all the nuance of setting it up. This is basically an easy button. Of which, I’m a fan of.

In using it for a conference call today – it was actually kinda nice having the much wider shot. I didn’t feel like I was up in everyone’s face. They said they liked it too.

So with that – go forth and update your firmware! Thanks for reading!