While it was a much more relaxing weekend than the go-go-go weeks of the past few months, we still got plenty done. Especially since the weather was largely quite acceptable. Here’s what I was up to the last few days.

1) Getting the Saris MP1 review published

Before the weekend could commence, I wanted to finish up the Saris MP1 review. Aside from 2 or 3 photos, the entire written text review was done by lunch on Friday. However, these days the written text reviews (multi-sport watches aside) are generally the easier of the two review types I do (site and YouTube). At least in terms of time.

What typically takes more time is the shooting, editing, rendering, and uploading of the video. In the case of the MP1 video, that included a large pile of secondary trainers to get shots on the platform and quick b-roll snippets. I typically like to shoot as much of this stuff at the same time together, so all the lighting/colors/etc match. 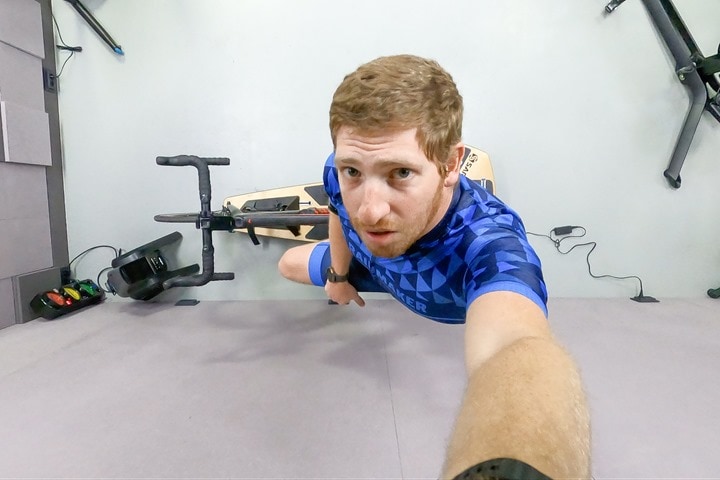 While my studio lights are super consistent, I find that the reality of my human meddling intervenes and I’ll have used my camera for something else, somewhere else, a day or two prior. And thus settings will be different and I’ll forget to change/match them all.

In any case, the afternoon was spent gathering b-roll, including bits on the bike, shots below the bike, shots above the bike, shots with the slider system, all sorts of shots. Probably about 90 minutes doing that. Then another 30 mins to shoot the main talking bit. After that, it was about 3 hours to edit it all, and then 15-20 mins to render. Another 10-15 mins to upload it, and then another 15-20 mins for YouTube to do processing.

Also, I opened a new jar of Speculoos in the process. Seemed appropriate. And glorious. 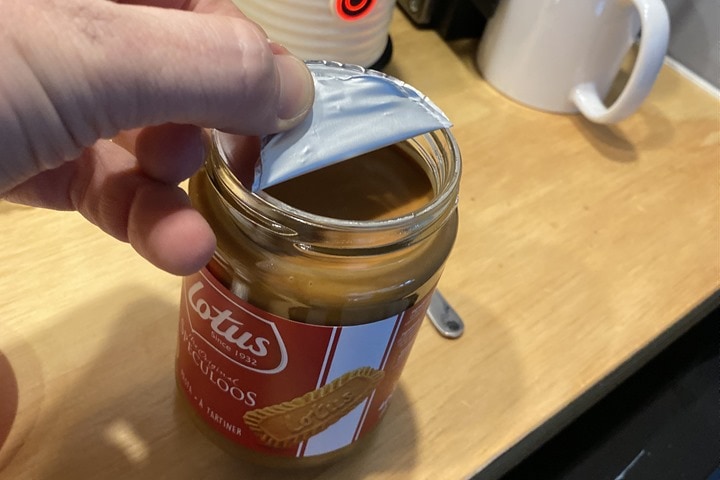 Once all that was done, around 7:45PM on Friday night, I hit publish on the written review and video review at the same time. Now, the weekend was on like Donkey Kong!

2) Dinner and a band 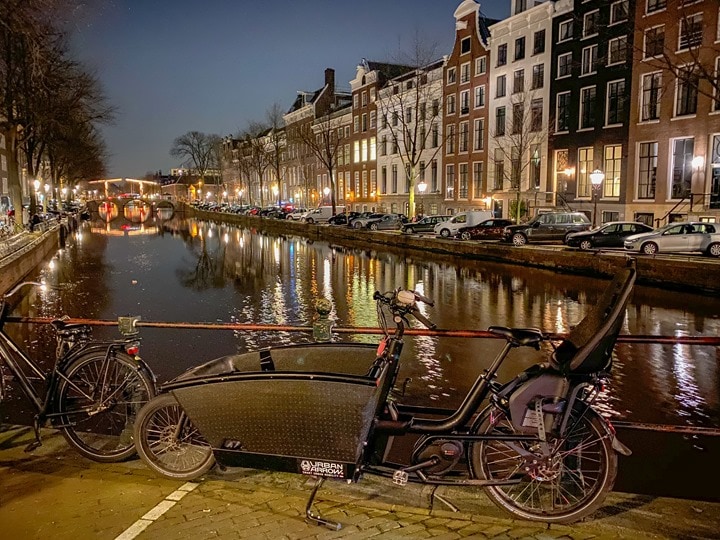 While YouTube was processing my video, I pedaled home. Which meant that by the time I got home I was able to hit publish and then immediately do a quick change of clothes to head out with The Girl for dinner…sans-kids.

We rode into town, me pedaling, and The Girl in the bucket. Our parking spot above had a nice view.

The place we picked last minute was rated well, and indeed, the food and service was very good. 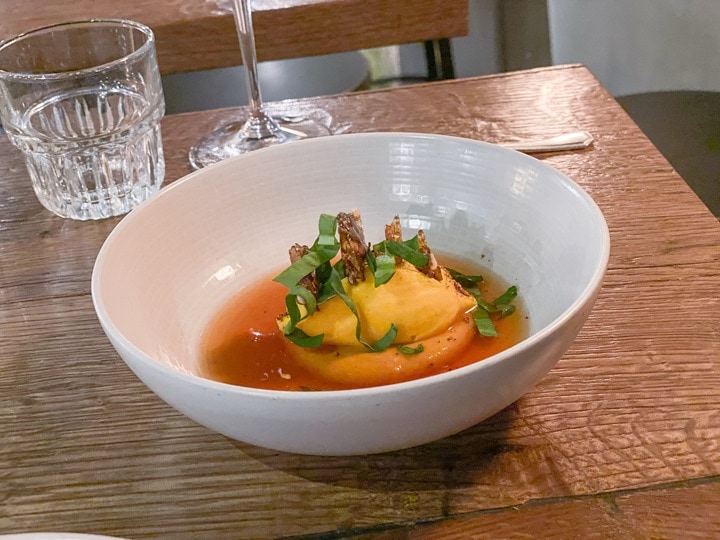 However, we both agreed it was overpriced for the quantity of food we received (by either Amsterdam or Paris standards, but especially Amsterdam standards). We essentially got what equated to a handful of tapas plates…for a non-tapas place. Given we’ve been living in Europe for 8 years now, we’re totally good with typical European portions. Even typical European fancy restaurant portions. Our stomachs can no longer handle ‘normal’ American restaurant portions.

Ironically, the largest (and also appropriate) portion was actually dessert, seen above. Pumpkin ice cream on a pumpkin something or other in an orange liquid that I’ve forgotten by now. But it was good, which I do remember!

Oh – and then afterwards we went and saw our friends play at a bar nearby. 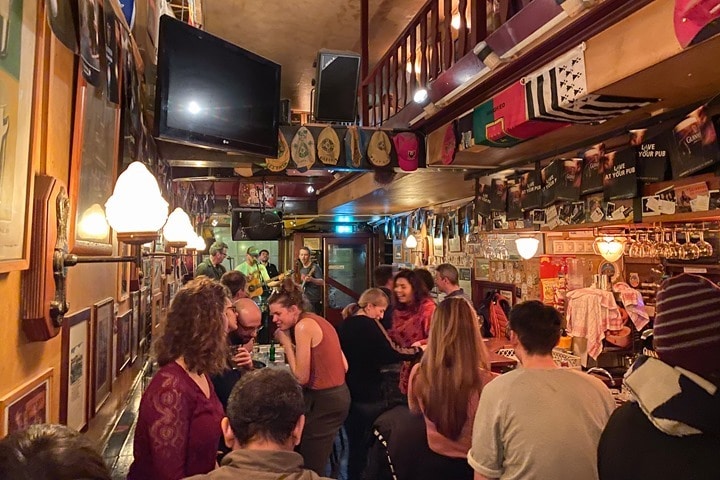 We headed down to the Cave on Saturday morning, mostly just to let the kids ride their bikes (which somehow had migrated down there recently), as well as paint and run-around. It’s a nice big empty space downstairs and outside for them to do that.

However, of note is that The Girl got a new bike last week too. No, not a mountain bike like the one I got the week prior. More on that soonish. 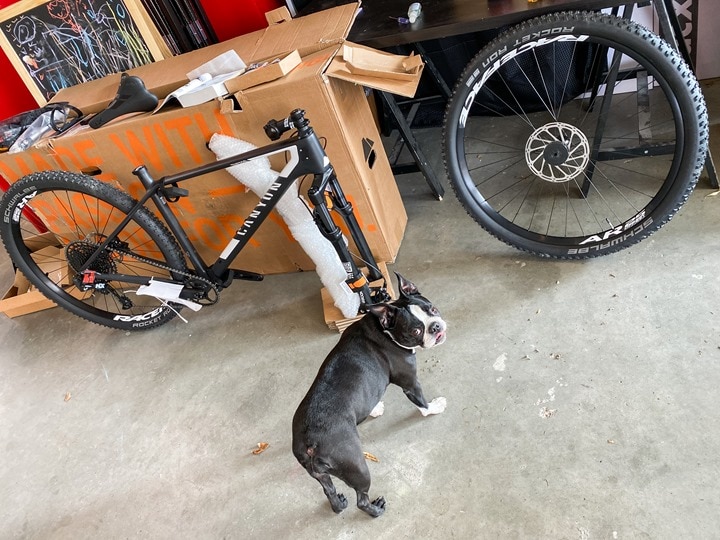 But, a new city/around-town bike that lets us go longer distances with the kids. We have the Urban Arrow cargo e-bike for most of our journeys, but logistically it becomes challenging for longer weekend trips against headwinds if our speeds are different. Given we don’t have a car, this is our primary method of transporting the kids, especially out to the beach, Ikea, farms, etc… 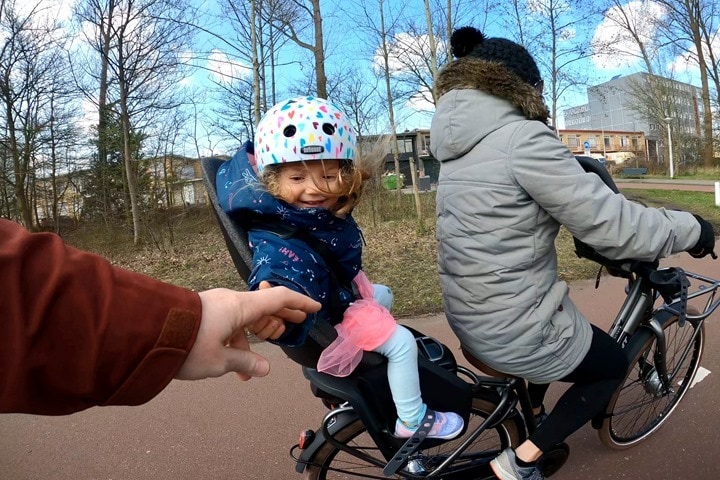 We mounted a few kid’s seats to it too of course. We’ve been buying the Yepp, now Thule, ones for years. And continue to do so. They just work. We use this one for the back of all our bikes, and this one for the front of some of our bikes. Side note: Holy crap how do they cost twice as much in the US as in Europe?!?

In any case, for The Girl’s new bike, she bought the bike from our local bike shop around the corner from our home – so there’s no assembly required (unlike mine, which is still sitting downstairs in the same state). And just this morning her front bike box arrived to allow us to put groceries, or Lucy, inside. I’m sure she’ll have some pics up of that soon on Instagram.

Saturday afternoon while two of three kids slept, and The Girl was out for a run, I jumped on the Peloton bike to knock out a workout. Luckily, the timing had worked out that I could take former pro cyclist Christian Vande Velde’s live session. He only does Peloton classes about twice per month, usually back to back days. Sorta a recurring guest instructor. The classes are always super structured, and usually hurt a lot.

Today was no exception. 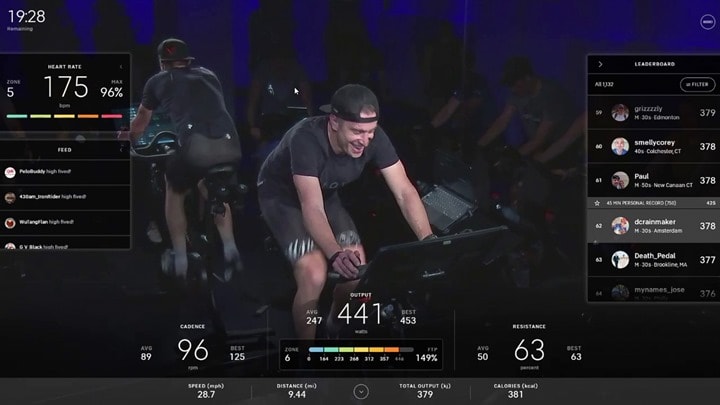 This workout was based on your power zones, so instead of calling out specific resistance knob levels, he’d call out power zones. The structure after a warm-up was fairly straightforward repeats that were roughly:

I did these at roughly:

Roughly, from memory. It repeated 4.5 times.

Still, it was ‘fun’. And in 45 minutes, it was done. Oh, about half-way through P3 woke up. During a recovery interval I went and grabbed her. 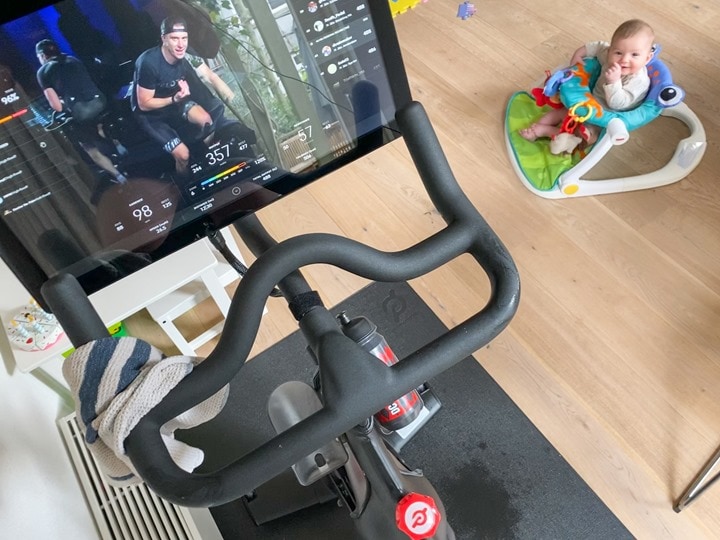 So she sat and watched me, giggling the entire time.

Oh, and afterwards I changed out a Quadlock mount I had just taken off another bike and swapped out a red collar that Lama had sent me..umm…a year ago. Both The Girl and I have standardized our phone cases on these, and we have them on all of our around-town bikes (I don’t tend to use them on my sport bikes except for when doing drone stuff). 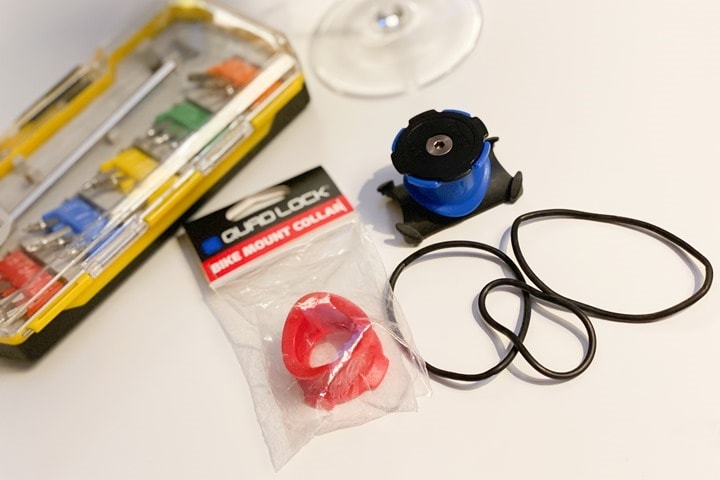 I put it on the Peloton bike so I’d stop dropping my phone while riding. Typically I put my phone in the water bottle holder, but this works better for monitoring the kids sleeping. 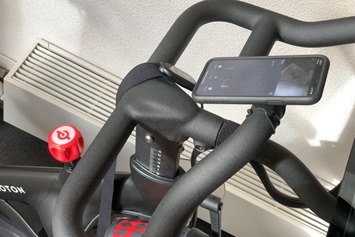 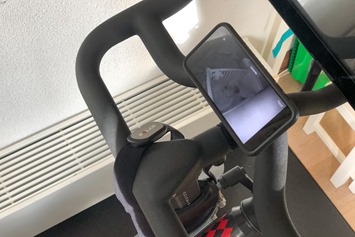 Finally, on Sunday afternoon I took out The Peanut for a run in the stroller. Sure, she’s a bit bigger now at 3.5yo, but that’s fine. I had hoped she might fall asleep for a bit. But alas, that didn’t happen.

Instead, she dutifully noted all the animals (including each duck or pigeon), trees, and anything else worthy of discussion (which, is everything) along the way. And she’d occasionally tell me to run faster. 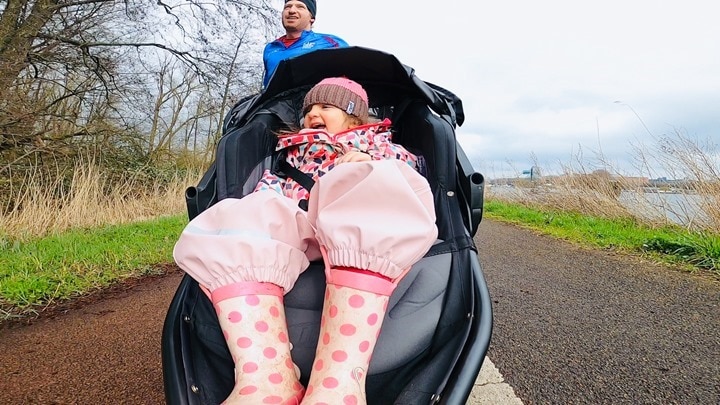 We found the fuzzy cows in the park (they wander freely, including atop the trail), including last years baby cows that are no longer baby cows. Maybe there’ll be new ones soon. 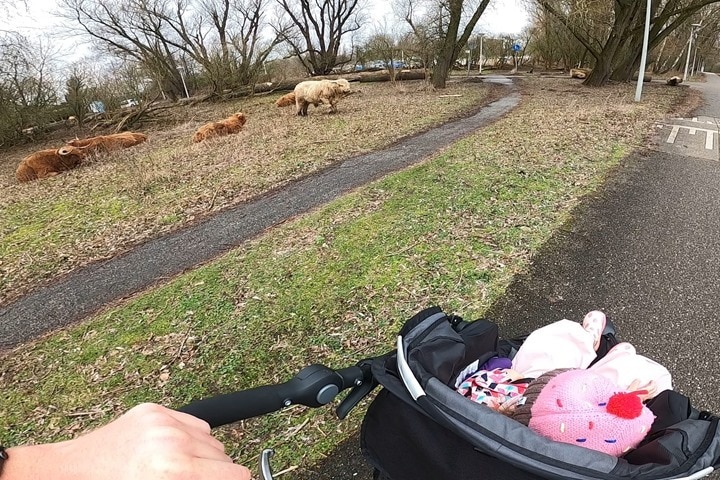 I was actually gathering data on a few different fronts, including for Suunto & LifeQ (maker of the optical HR sensor inside the Suunto 7). So I was running an app that gathers a bunch of behind the scenes logging data too. 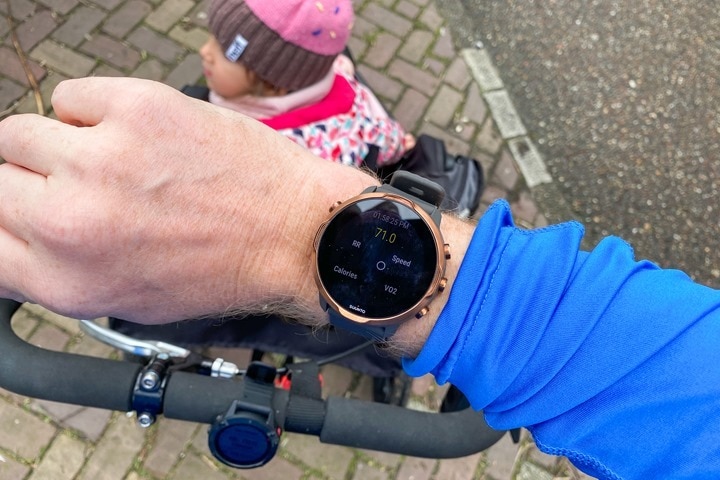 I’ll bundle all this data up here on Monday from four different workouts and send it over. Hopefully they’ll be able to get to the bottom of the accuracy issues I’m seeing with it. Also, my watch is headed to Suunto too, to get dissected.

Oh, and random behind the scenes tidbits. For both the on-bike shots and the stroller shots, I tend to use a gooseneck GoPro mount. I usually get the longer knock-off ones (in fact, this exact one) to get it into just the right spot. Sometimes I remove links or add links. This one started at 19 links, and is down to less than half that. I’ve got a few of them. 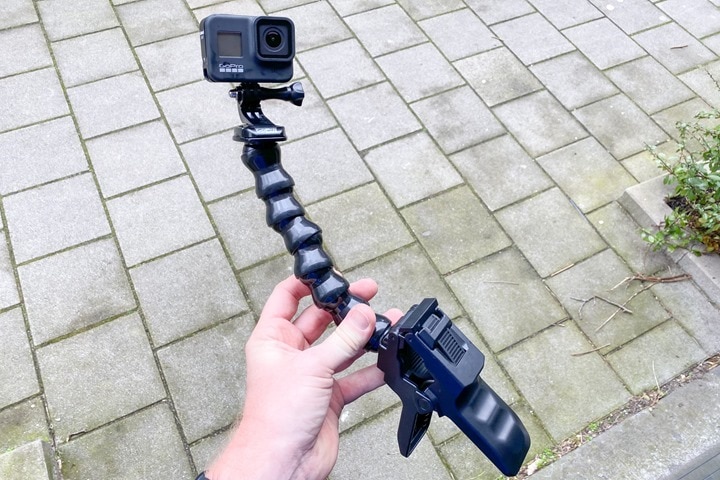 Then most of the time I just shoot either on the live burst photo mode on the Hero 8 Black, or simply shoot a video and snip the frames I want later on.