Zwift’s Running Track Is Open: Here’s what a structured track workout is like 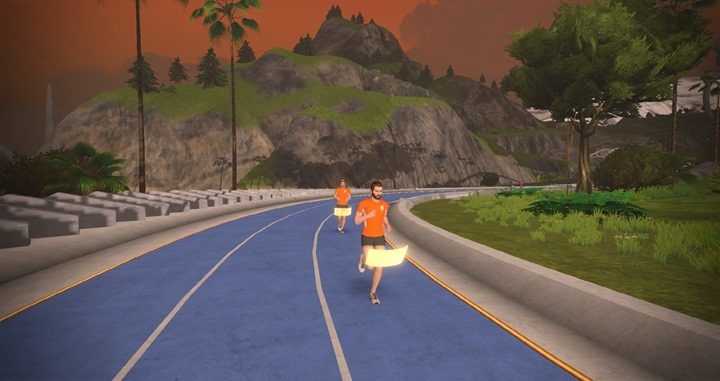 Yes, I just ran in Zwift. For real. On purpose.

Earlier this week in an apparent New Year’s Eve ‘let’s do this’ moment, Zwift rolled out its last course edition of this year: A 400m running track. You may have even seen a few screenshots of people taking it for a loop over the last day or two.

But for this post – I actually ran the darn thing with a legit workout on a legit treadmill to legit try and pretend the last week’s worth of eating and drinking didn’t happen. Or basically, I did what every other person does for the first 3 days of January before falling off the bandwagon.

The track is named May Field, after one of Zwift’s co-founders, Jon Mayfield. My guess is the folks at Zwift have been saving up that name for years for this moment. And bad Dad jokes aside, it’s an amazing name for it.

Like all cool things in Zwift, it’s located on Watopia (Zwift’s artificial island in the middle of the Pacific Ocean), and is more specifically just adjacent to Ocean Boulevard, which you can see each time you come down one of the two straightaways: 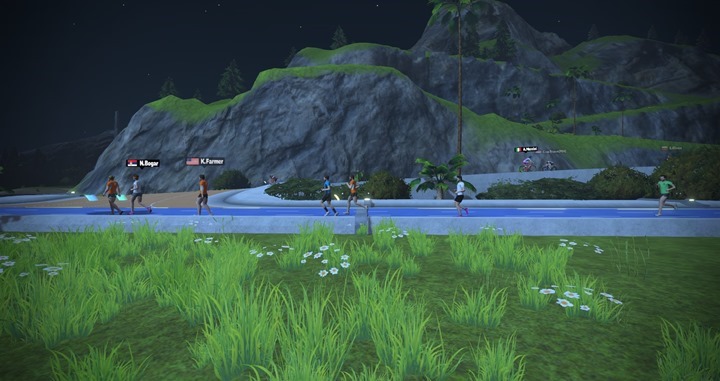 The 400m long track connects to the rest of the Watopia road network via that straightaway nearest Ocean Boulevard, and each time you loop yourself around you’ll have the opportunity to leave the track just like any other road junction in Zwift. 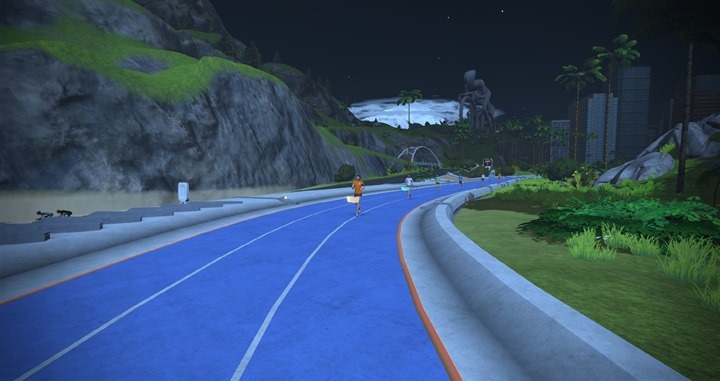 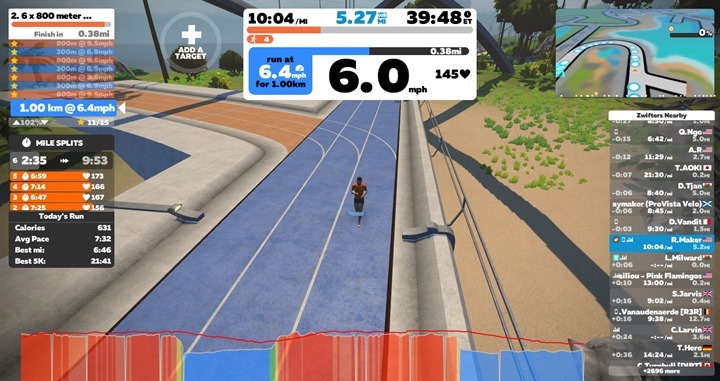 The track sits atop a blend of land and raised concrete breakwaters, with it roughly halfway divided atop a beach. In real-life, it’d probably be one of the most incredible tracks out there. Also, as you’ve noticed by now – it’s blue. 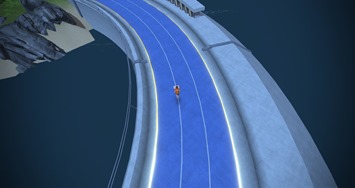 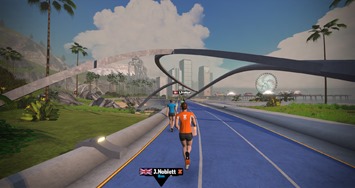 Further, like an F-Zero track infused with Philips Hue it has lighting on the edges. With that, that’s all there is on the specs front. I can’t really think of a way to make this section any longer.

Giving it a whirl:

There’s something about the hyper-structured element of track running that makes it fun to me. In the real world, it’s a mathematical challenge as I sub-divide the track into 100m chunks and figure out exactly how many seconds I need to hit each 100m chunk in to hit the specified paces for that portion of the workout. It keeps my brain busy.

The fact that I’m running around and around in a single spot doesn’t really bother me, as it’s more about the challenge of pacing the splits perfectly.

So does Zwift replicate that? Well, kinda.

First though, I paired up my devices. For this workout I was using a NPE RUNN device on my treadmill. The one I have is still one of the prototypes, but I believe they’re shipping it now. 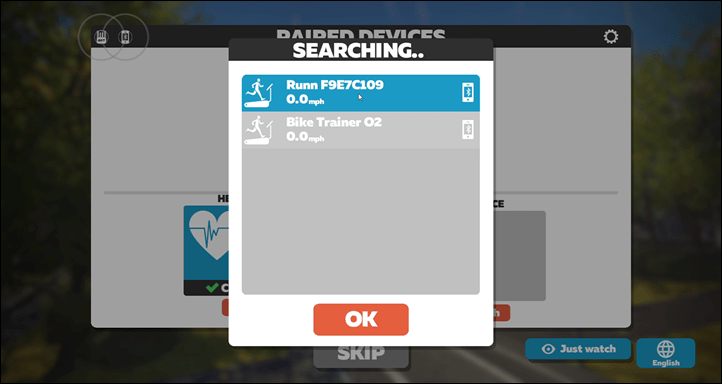 Essentially it attaches to your treadmill in the back and then transmits your treadmill’s speed over ANT+ & Bluetooth Smart. It even transmits the incline, but Zwift doesn’t know what to do with that – so nothing happens there. Also, it’ll do cadence too. 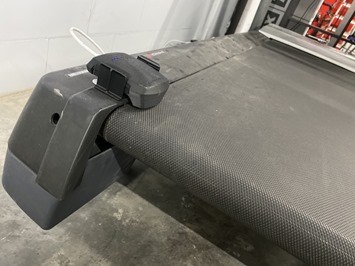 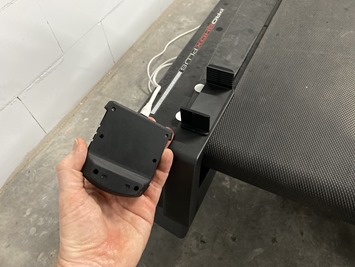 It uses an optical sensor to detect a small sticker (or, white-out in my case) on the belt. Unlike the TreadTracker I reviewed (which is no longer sold), this isn’t susceptible to bounces. 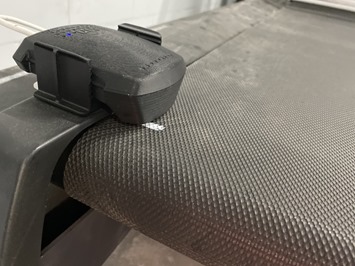 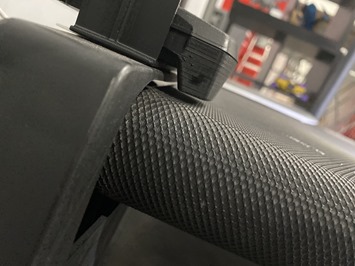 I also paired up the Mio Pod for heart rate. Now’s a great time to point out that it’s a new decade, and it’s time for Garmin to have their wearables start transmitting the HR via Bluetooth Smart too (not just ANT+). I know…they’d probably say they’re more or less the only ones transmitting heart rate already. To which I’d say – cool, now do it for Bluetooth Smart and join this decade. Normally I’d be using Apple TV or an iPad for this. I used the PC as a one-off rarity so I could get clean screenshots for parts of this post (without any overlays). 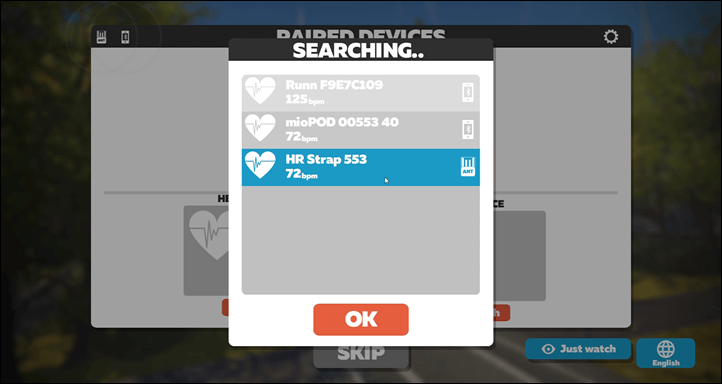 Then, I selected a structured workout for this run, as one does on a track. However, Zwift doesn’t actually have any track workouts in their structured workout listing. Like every comment ever about Zwift structured workouts – the library/categorization/filtering/everything largely sucks. And this is no exception. But I found something in the Zwift Academy Tri Bucket that was structured enough that it made sense on a 400m track, and went with it: 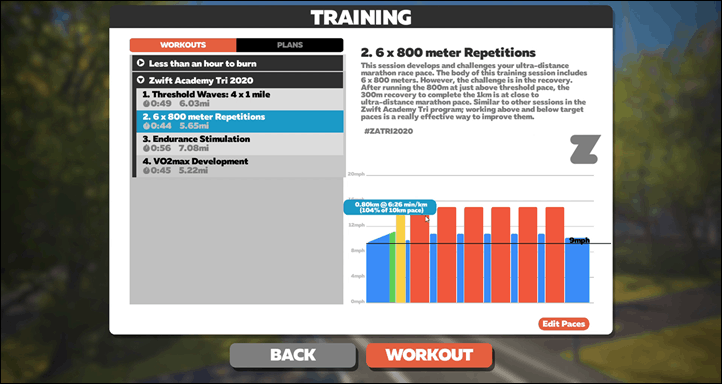 Then it was time to select May Field as the route within Watopia: 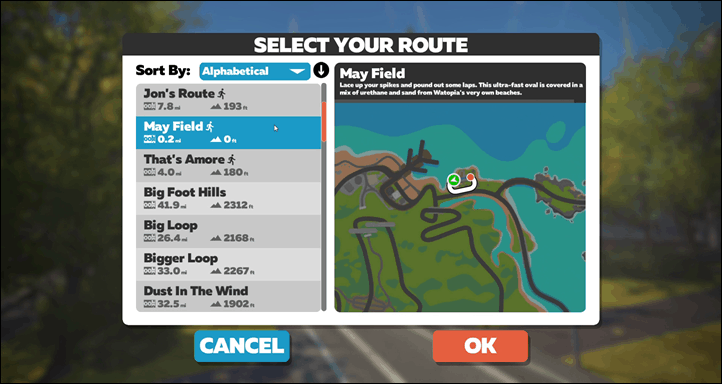 Once that’s done, it was onto the track I went, where a few other people were stretching and a relatively steady stream of runners cruised by. 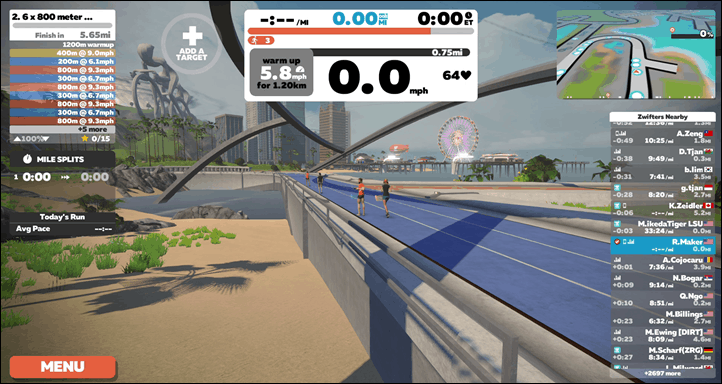 And then I got my run on, and got into the warm-up: 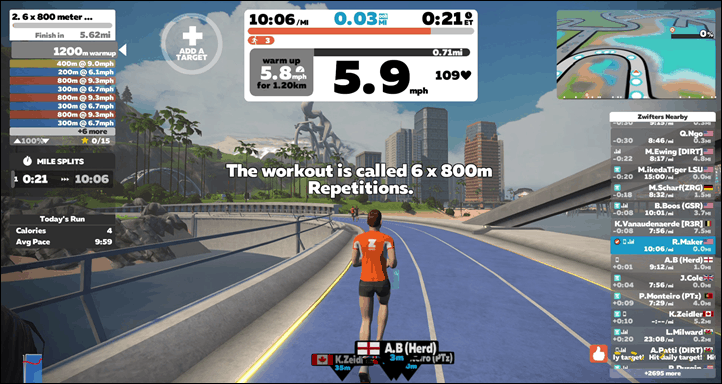 Oh, here’s me running. In unrelated news I forgot to set the GoPro to the correct Hz value, so the video footage was unusable. But a screenshot was half-way acceptable: 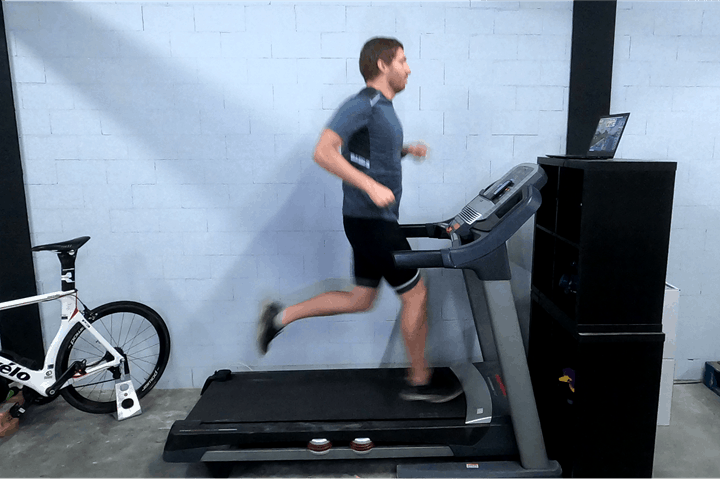 As you loop around the track you’ll find lane lines, but no actual track 100m markings like you’d expect. Instead, there are arches that pop-up in various scenarios. For example, below you can see the location of the end of my next interval, once I complete this loop and do one more: 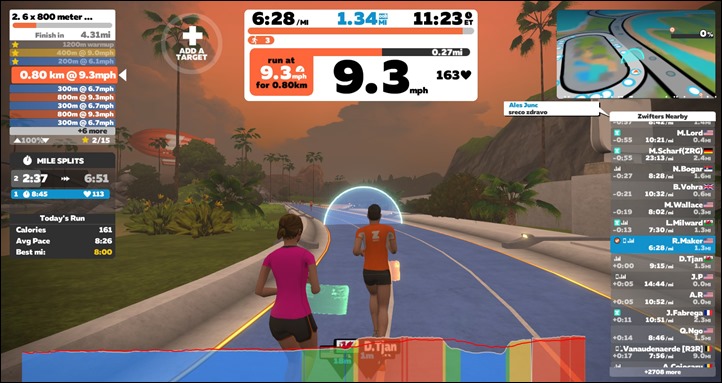 Here’s another example as I’m just a split-second away from clearing the banner at the end of a recovery interval: 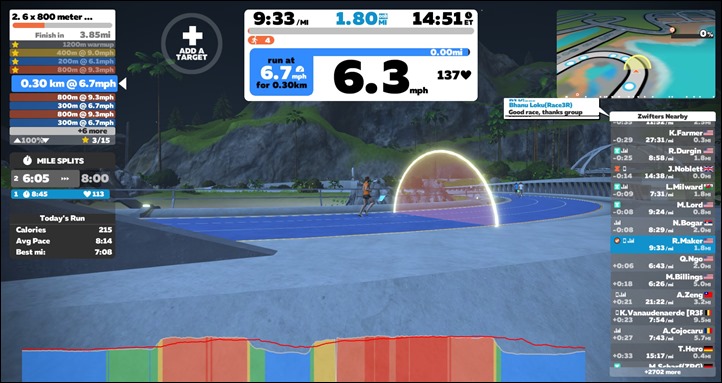 As you loop around the land portion of the track, you’ll see the cyclists rolling past on Ocean Boulevard. And occasionally the lost runner as well. You’ll also notice it’s offering me the option to stay on the track or leave and head out. 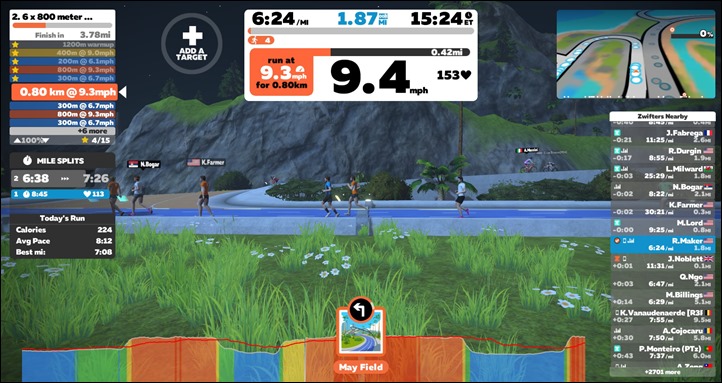 And if you zoom in on the companion app, you’ll see all your friendly little dots going in circles as well. Roughly about 20 or so people out there. Not too shabby!

By and large, things work exactly as you expect them to from a Zwift structured workout standpoint. In my case I was doing 800m repeats, as you can see above. But you can also see the obvious disconnect between how runners would write track workouts versus how Zwift shows them. No runner that I know of would ever write ‘0.80 km’ akin Zwift shows above. And even statute Americana runners like myself would still use metric on a track for purpose of mid-workout tracking.  Specifically, when on a track, Zwift should do the following:

A) Structured workouts should show 800m (instead of 0.80km), same for any other duration (like 400m instead of 0.40m)
B) Distances remaining should show actual meters when on the track, not my statute remaining (0.42mi)

And oddly, you see some of this above in the screenshot. You’ll notice some portions are written ‘800m’ while others are written 0.80 km. Why?

Now I’m sure someone will disagree with my ‘B’ above, but I suspect if you polled a bunch of runners, virtually everyone would say just show me meters remaining on a track. That’s how our brain works. Whereas out on the road – sure, 0.42mi makes sense. And while we’re at it – I know Zwift running is nothing new, and I know it’s always been this way, but in a structured workout I have no idea what the heck 9.3MPH is in my pace-centric brain.

I get it – it makes *complete sense* to show me ‘Run at 9.3MPH’ in the main ‘do this now’ workout screen because that’s how many treadmills specify speed. And, in most treadmills it also shows your pace metric as well (i.e. 6:18/mile or 3:50/km). However, for the upcoming bit on the side, just give that to me 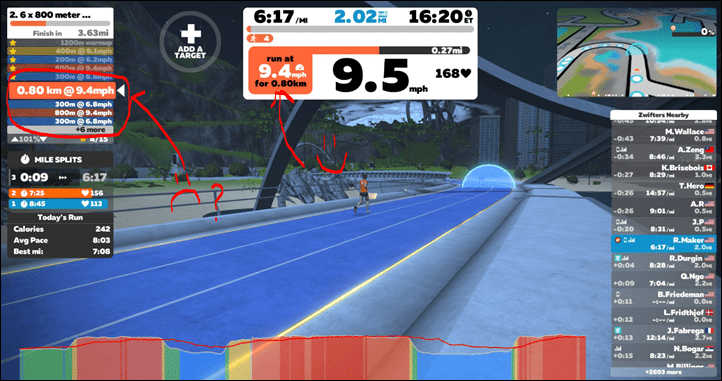 Next, there’s also an obvious but with the stars in the workouts too. On the main screen you’ll see I nailed every single segment – with stars next to each one. Yet, somehow according to the companion app I didn’t nail some of them. Notice below (screenshots taken within one second of each other), that it shows all stars on the left main screen, and yet partial stars on the right companion app screen. 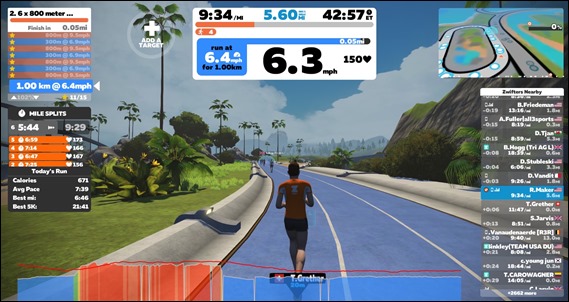 Unrelated to Zwift, I was once again reminded how variable my treadmill is at speed. Once I get up to interval pace, it’s super inconsistent. Which isn’t to say it’s inaccurate (not terribly), but rather that it can’t hold the pace consistently throughout an interval.  You set a pace (for example 9.3MPH), and then it’ll slowly climb to 10.2MPH or so. This isn’t just a sensor thing of course, as I can certainly feel the difference quite clearly as there’s a huge difference between 9.5MPH and 10.1MPH when you’re a few intervals in. 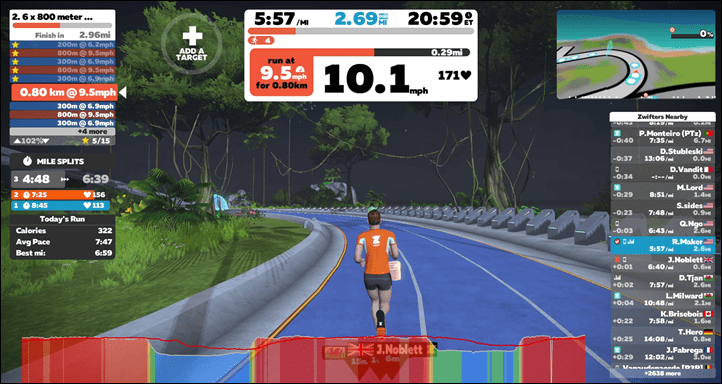 And with that, some 23 loops of May Field later, I wrapped things up. 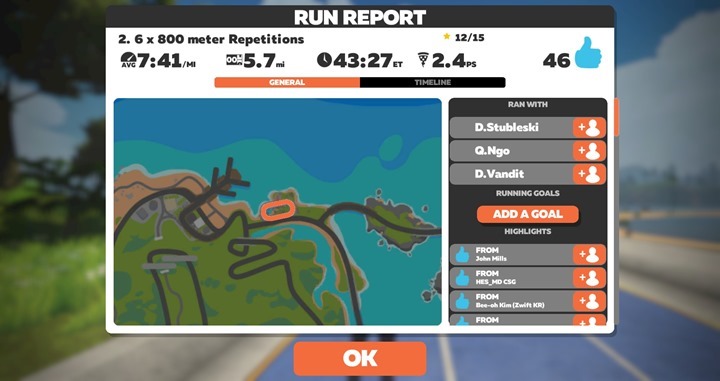 Also – this reminds me: Why on earth doesn’t the Zwift Companion App let you give thumbs up to people while you’re in the middle of a cycling or running structured workout? I’ve been meaning to ask this for months. It’s simply not an option (at least not on the iOS app). There’s toast buttons and all sorts of other options, but no thumbs up for others. Would love for someone to tell me the trick to accessing it!

Finally – a quick update to this noticed by my coach when he received the workout via TrainingPeaks, one will have really dorky NGP paces. Despite showing 0 for the elevation gain/loss on each lap in the Analysis tab, the NGP algorithm (Normalized Graded Pace, which basically aims to equalize the impact of going up/down hills) seems to take the terrain map into account.

Given Zwift decided to place this on the side of a mountain, you can see the topo elevation lines, which totally mess up your NGP. This could actually be a legit problem for people that track NGP over longer periods of time, since it’ll impact those reports. Of course, that’s already likely an issue in Zwift/TrainingPeaks, and seems like a great opportunity for TrainingPeaks to re-think how they handle routes from Zwift for running. 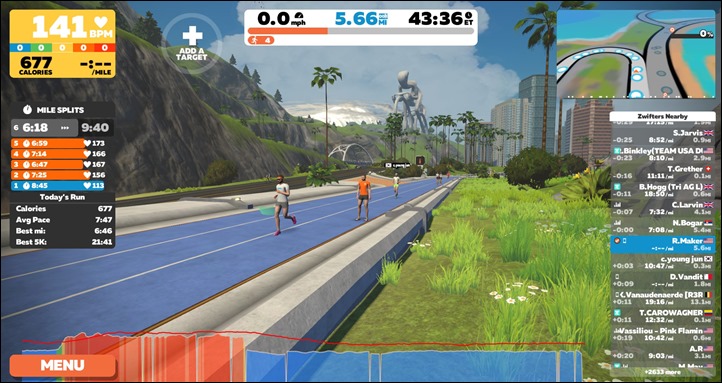 Look, in general I’m no Zwift Running fan. I think it’s mostly astoundingly boring, largely because I think treadmill running is pretty darn boring. But, I do like track running. And somehow, by extension I liked track running in Zwift.

I think the singular element that made this work was that there were other real-life people on the track at the same time. I know there are real-life people in Zwift Running elsewhere, even groups that meet up and run together. But somehow it just doesn’t work in my head. Perhaps my head is broken. Or perhaps because almost no treadmills actually integrate with Zwift, there’s no incline control. As such, the same elements at play in cycling smart trainers don’t apply here. Whereas with the track there’s no elevation change, and thus that aspect is removed from my brain’s equation.

Will I be back on the Zwift Track again? Oddly enough, I think I might. A real running track is less than 800m from the DCR Studio. And it’s stunningly nice too. Lit at night, and never any weird track blockages for events or anything. It’s basically the perfect track.

Normally, I don’t mind running in crappy weather (which is pretty much weather the entire year except summer here in the Netherlands). Because I’m still going somewhere and seeing something. But with a track, it’s all about the structured workout. And in this case, I don’t even need to put on all my cold weather running stuff, to get blown around for an hour in cold rain…all to get that same workout. It’s almost tempting.

We’ll see – ask me in May how many times I did a Zwift track workout and I’ll let ya know.