Tour Down Under 2020: Power Meters Of the WorldTour Men’s Teams 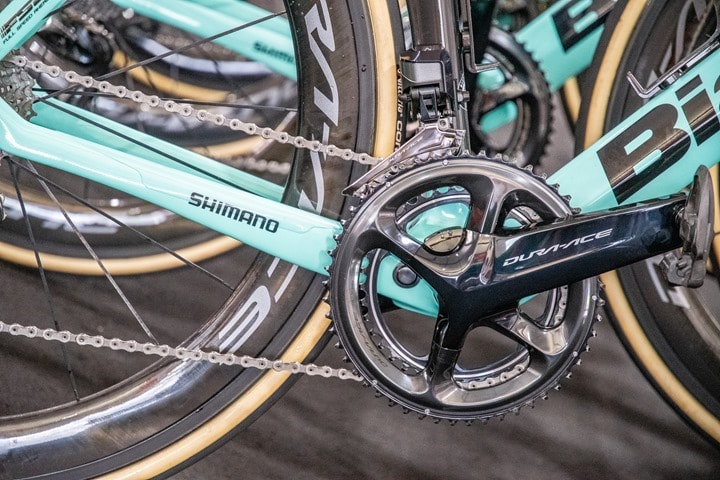 The Tour Down Under represents the first race of the UCI WorldTour season, and as such, establishes what we’ll see in terms of equipment as the baseline for most tech on the teams this year. This has more or less been the case for years, and this year is no different.

The men kicked off their festivities down here on Sunday with the People’s Choice criterium, but the actual Tour Down Under Stage 1 doesn’t begin till Tuesday. The ladies meanwhile actually finished Sunday, after racing over the past week. I’ve got an entire post on them too – so fear not, that’s coming tomorrow (and we’re seeing some good movement there too in full team sponsorships this year compared to last year).

Note that I’m mainly focused on sports tech goodness – primarily power meters, groupsets (which, in 2020 basically drive power meter selection), bike computer mounts, and bike computers themselves. Whereas things like bike frames and wheels and such are just a bit outside my focus. CyclingTips has a good overview of that side of the house in their multi-part series.

So, as a quick recap, here’s the tech posts you’re looking for:

Plus, there’s some other tech goodness coming out tomorrow, and a few more things that’ll fill up the schedule the rest of the week. Also, when I say ‘tomorrow’, I’m talking Adelaide (Australia) time. With their wonky half-hour time-zone offset, that’s all my brain can figure out these days. Unless you’re in New Zealand, then just consider me from the future.

Oh – and finally, some of you might ask about trainers. There aren’t any stages at the Tour Down Under that require warm-ups on trainers (meaning, there are no time-trial stages). As such, there are essentially no trainers taken here by teams, aside from perhaps 1 or 2 to have handy on an as-needed basis. These are usually just stashed under 237 nutrition packets and dirty rags in the back of a team car somewhere.

It’s All About the Sponsorships: 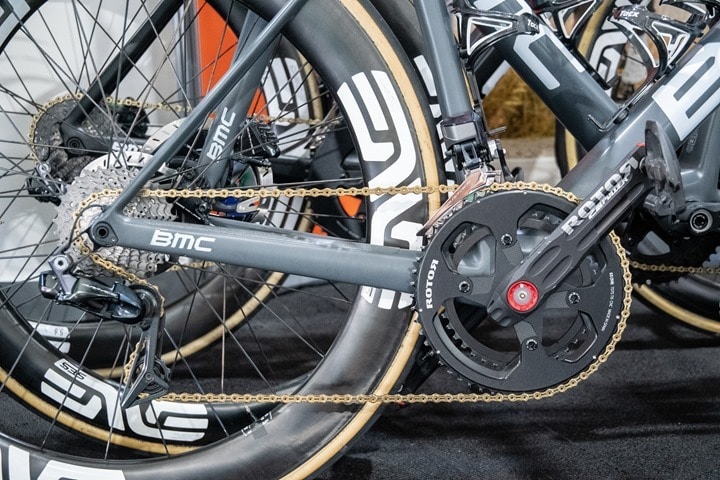 Now before we get too far down into the tech goodness – remember that *everything* you see is sponsored. Everything. These sponsors dictate exactly which gear is used, and as we’ll see with power meters this year, that’s got some pretty interesting implications. Even GPS cycling computers (which I’ll cover in another post) are sponsorship items in 2020 (it started becoming the case in 2019, but I think we’re at 100% team sponsorship in 2020).

Given the very nature of sponsorship is showing off one’s brand for payment (or free equipment), it shouldn’t be assumed that any product is inherently ‘better’ because a WorldTour team is riding it.  Instead, it’s just there because they were paid to ride it.  You’ll see power meter brands change year after year with the wind (or the payment as it may be).  You’ll also see cases where a brand may be sponsoring a team, but the team isn’t actually riding the commercially available product.  In the past, we saw then Team Sky riding unreleased Stages LR dual-sided units for years, or other teams riding Specialized units well before public availability (or even announcement).

The point being – look at these products as “Oh, that’s interesting”, more than “Oh, I should immediately go out and buy this product because X rider is on it.” Make sense?  Good. 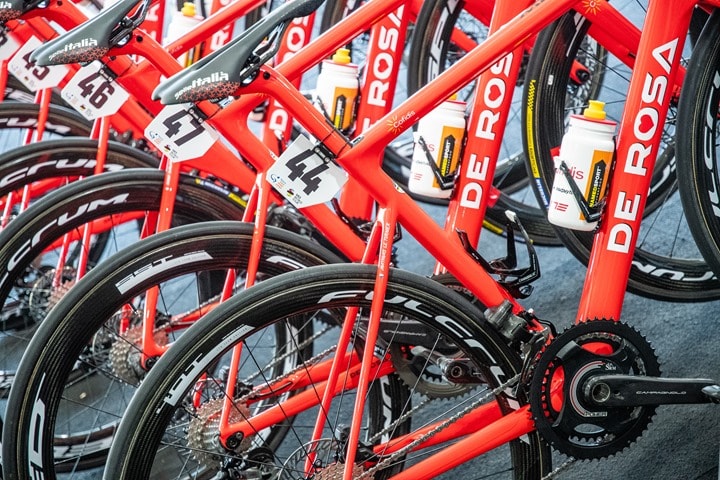 As a general rule of thumb, Shimano spends the most money of any bike-related parts supplier on ensuring the pro peloton is equipped on their gear. There are and were exceptions to that, such as a few years ago when SRAM was introducing eTAP, they spent a boatload of money for a year or two to have a significant quantity of teams on SRAM RED eTAP, to ‘prove’ it was capable of the grand tours. With that mission accomplished, SRAM saved some cash and Shimano spent more.  No matter how much internet chatter you read, that’s the hard reality of it: Sponsors equip what the teams ride. End of story.

However – it’s important to note that while Shimano directly sponsors the most teams in the peloton, they don’t actually directly sponsor all the teams riding Shimano. Instead, what can happen is that the bike sponsor ends up equipping a given team with a Shimano bike. That can be for any number of reasons from only having a Shimano option available, to the team requesting Shimano, to a random dude in an office building flipping the coin.

With that said, here’s the breakouts by team:

*UniSA is a composite team created solely for the Tour Down Under, of top Australia up and coming riders. As such, there’s no official team sponsor anything – bikes, power meters or otherwise. By pure happenstance however, a number of the riders were from Team BridgeLane, which is using Argon18 bikes with 4iiii power meters on them.

And here’s a complete gallery of them all (you can hover over one to see the team name):

This gets us to the elephant in the room: This year is *by far* the least accurate year for power meters in the pro peloton. Seriously, it’s crazy.

As shown in review after review, the Shimano power meter is simply not accurate. There’s no two ways around it. It’s just not. It’s still not, and it won’t be, due to the way Shimano casts their right-side crank arms in the 8000 & 9100 series. That’s a reality. And yet, the majority of pro peloton are on it for sponsorships.

Heck, we could actually take this a step further and note that the ROTOR 2INpower is also not the most accurate duck either, something teams in the past have noted to me. And then we have the non-active temperature compensation SRM units out there, which by SRM’s own admission desperately need temperate compensation to handle any sort of temp swings (it’ll handle it if you stop and zero offset, which of course no pro rider will do mid-climb). 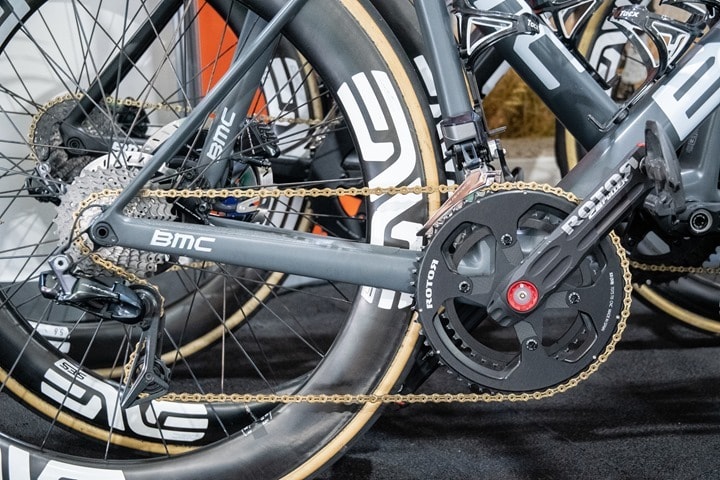 On the bright side, it sounds like ROTOR is planning to change to the INspider crankset for the pro teams I talked with, which may eliminate the accuracy issues there. And then both SRAM and Power2Max offer very solid and reliable products for the teams left.

As with the Tour de France last year, and the WorldTour teams for a few years now you’ll notice that once again there are no pedal-based power meters.

Again, don’t overthink this. The reasoning is super simple: There’s only four pedal-based brands on the market these days (PowerTap P1/P2 now owned by Quarq in turn owned by SRAM, Garmin Vector, Favero Assioma, SRM EXACT), and none of them really want to spend the cash to put pedals on pro teams bikes.  But there is a secondary aspect: Pro riders are notoriously finicky when it comes to their pedal choices. With all of these pedal-based varieties currently on Look & Look variants, that’s super limiting. 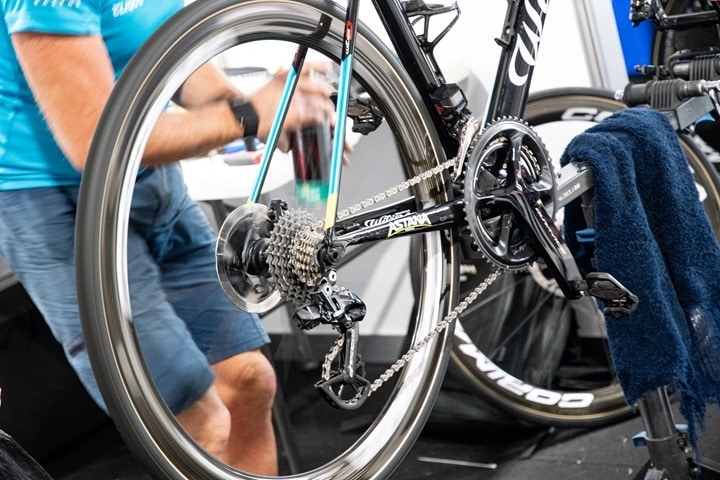 If we harken back to the days of Garmin trying to equip their tour teams in Vector 1/2, there were two issues there. The first was that both of those still required the clunky pods – which pro team mechanics hated dealing with. And second, there were prior pedal-based contractual obligations otherwise for some riders. It was never an accuracy thing.

Here’s my random bet: Eventually Quarq will come out with a PowerTap P3 (they’ve said as such, whatever the name ends up being). And I wouldn’t be surprised to see SRAM/Quarq spend a bit of money the following year on having some Pro teams use it. Just like they did in the initial SRAM eTAP launch. Especially if multiple or different pedal types are an option. 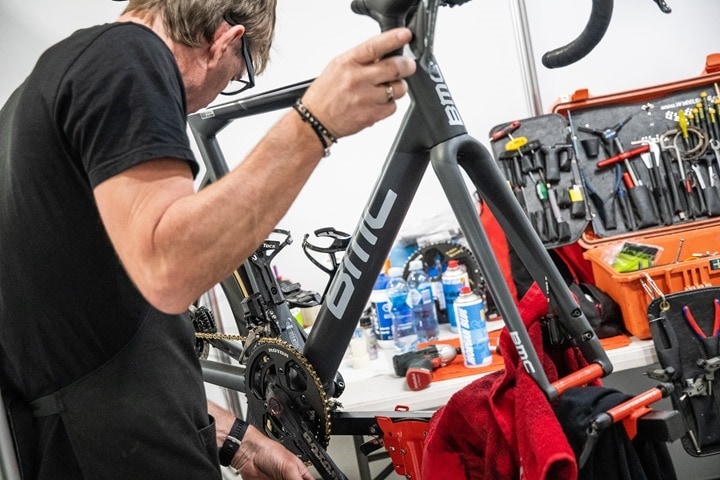 As with most years, these units will stand as the power meters and gear of record on these teams for the remainder of the season.  Sometimes you might see some minor fluctuations around the April-May timeframe, if new models come out (e.g. I expect to see the ROTOR teams move over to INspider any week now).  But beyond that, I wouldn’t expect much in the way of power meter changes.

Stay tuned tomorrow for the women, as well as a round-up of the bike computers (where you’ll see an even greater domination of sponsorship) and bike computer mounts (which is almost universal in adoption). Fun times ahead!

With that – thanks for reading, and I’m looking forward to sharing more Tour Down Under tech goodness over the coming days!

Oh, and if you’re in Adelaide for the Tour Down Under, both myself and GPLAMA will be at the Rapha Pop-Up shop Tuesday at 4PM to do a live studio audience recording of the FIT File Podcast. Plus, there’s free beer arranged!