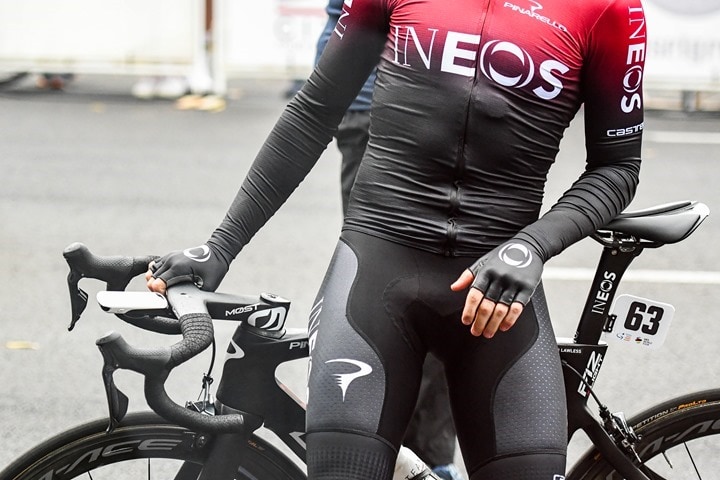 Never have I ever seen so many Garmin Edge units in one place, than is on show at the Tour Down Under this year. That’s of course partly because Garmin in recent years has shifted away from being a major sponsor of a single team, to instead going for minor sponsorships of basically almost all the teams. However, it’s not just Garmin that has ramped up their strategy. Wahoo has continued to expand its WorldTour (and beyond) teams, up to three this year. And then beyond that we’ve got Stages, Sigma, Bryton, and SRM filling out the rest.

When a bike passes by me, I’m rarely looking at that person’s frame – but instead, what’s on their handlebars. And the Tour Down Under is packed with handlebar gazing. Though, I could see how at the wrong angle that probably looks like crotch watching. Still, that’s my job apparently.

Now, unlike aspects such as bike frames or power meters, the riders actually do have a bit of choice with some of their bike GPS unit selection. For example, both Garmin and Wahoo allow riders to choose whatever head unit they’d like within the current crop of units. In the case of Garmin, riders can choose from the Edge 130, Edge 530, Edge 830, and Edge 1030. While for Wahoo users that’s largely between the Wahoo ELEMNT BOLT and ROAM (none that I saw selected the older original ELEMNT). While I didn’t ask Stages, I presume that they can select any of the current model Dash’s as well, though I only saw Dash M50’s on-hand (as opposed to L50’s or L10’s). For Sigma, the sponsorship is specifically the SIGMA ROX 12, which is honestly the only Sigma bike GPS you’d want anyway (and it’s a good one).

With SRM, those teams are all PC8 only, logical since everything else would be significantly old and stinky. Whereas for Bryton they’ve got them on Rider 420’s for now, but expect to shift later in the season to Rider 860’s once those units are ready. 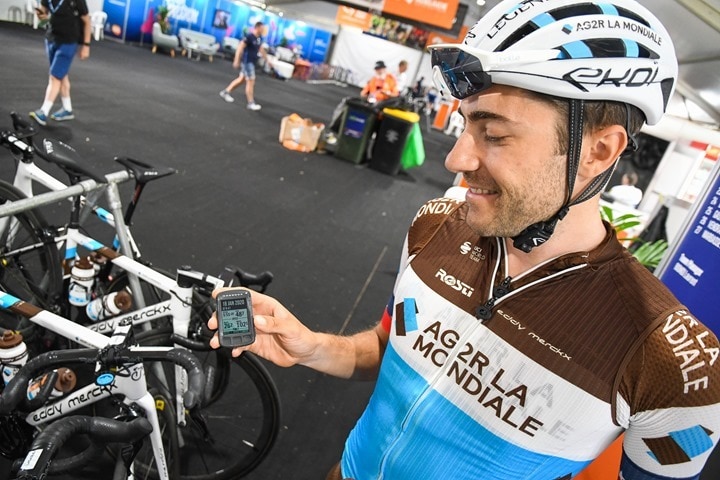 For inventory purposes I tried to find as many bikes as possible. Remember with pro riders and head units, they don’t leave them on their bikes when unattended (for the most part), and most riders don’t tend to just sit on their bikes in a big bunch in one static spot. So for Garmin ones, there may be an odd duck who is on (for example) an Edge 130 when the rest of the team is rockin’ Edge 830’s. I saw more Edge 130’s than I expected out there.

Here’s a quick gallery of most of the teams above. There’s a few that may be missing from below if I didn’t get great close-up shots of them. I’ve got a full walk-through video where you can see every team though one after another that I’ll be uploading shortly. You can hover over for the exact team name and model number.

And here’s the break-out by brand:

*These teams are official Garmin sponsored teams, the remainder are using them just because. Also note that for this year Garmin and Tacx technically have different sponsorships for some teams. There are overlap on some, but not all (for example, Lotto Soudal is a Tacx team but uses SRM head units/power meters).

*All of the above are official Wahoo sponsored teams.

*All of the above are official sponsored SRM teams. 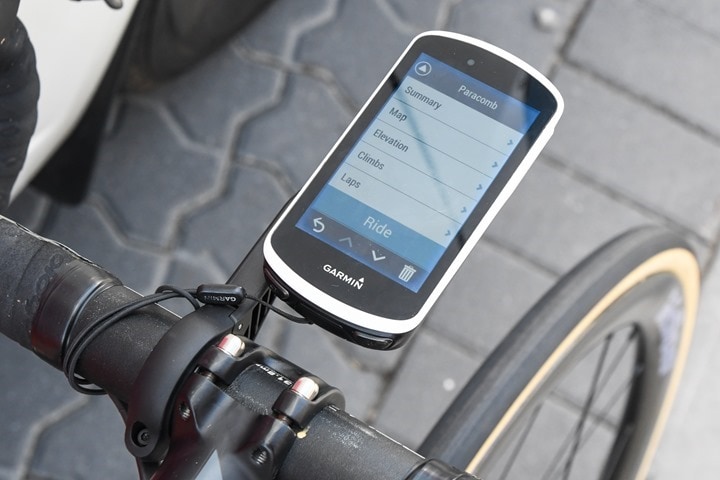 For the most part, just like power meters, team GPS units are driven by sponsorships. However, about 1/3rd of the teams using Garmin GPS units are actually not sponsored by Garmin. They’re just using them for whatever internal reasons. One strong reason it’s likely that those teams are using Garmin is the integration with VeloViewer, specifically within the framework of the team platform that 17 of 19 WorldTour teams are using this year. That platform allows them to create and mark course details for both the team cars (using an iPad in real-time during the race), but also the riders on their GPS units. Historically speaking Wahoo didn’t have the same navigation and mapping capabilities as Garmin. Whereas with the ROAM they’ve been able to catch-up a bit in that realm. Still, as I heard from some riders over the last few days, they definitely find value in specific features – namely ClimbPro was one I heard repeatedly from multiple teams/riders.

In the context of how these riders race, all of them have the course files loaded up required for ClimbPro. For example, the photo above was taken of one of the EF Education First rider’s bikes at the start of Stages 3, showing he had the course for that day’s stage ready and loaded. In fact, if you go back to the history of why certain teams haven’t been on Wahoo – Team INEOS (then Team Sky) had a number of very specific race-driven things they wanted that Garmin had that Wahoo didn’t. In a Wahoo ROAM world that gap has significantly closed, and I’d be willing to bet we’re going to see some features in 2020 end up on Wahoo bike computers that speak to some of the minor gaps that pro teams have. The same is probably going to be true of Bryton, Sigma, and Stages too.

More and more these teams are actually using the features on their bike computers for racing and course awareness. It’s no longer just a bike computer running in the background. They get turn alerts, climb notifications, and more. And that’s before we even get into the wearable side of tracking that some teams are doing now (more on that next week). Of course, as always, at the end of the day these GPS units are just one part of a much larger moving puzzle to getting stage and race wins.